So I picked up 2 new corals this past Friday: 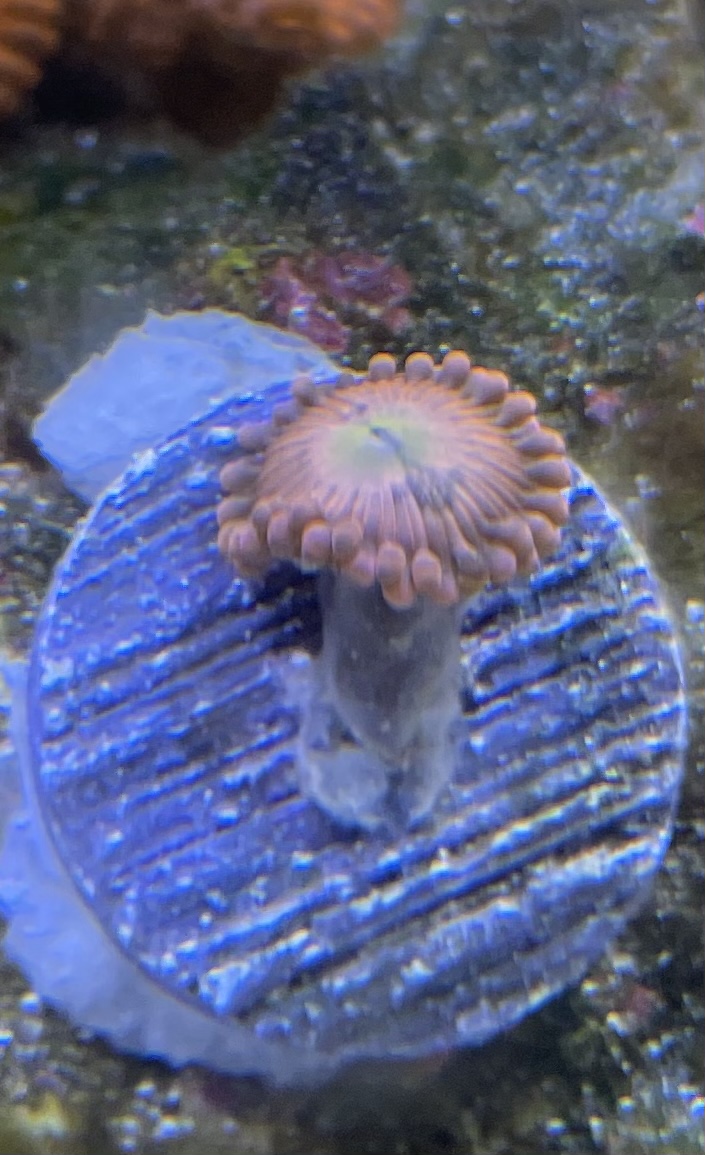 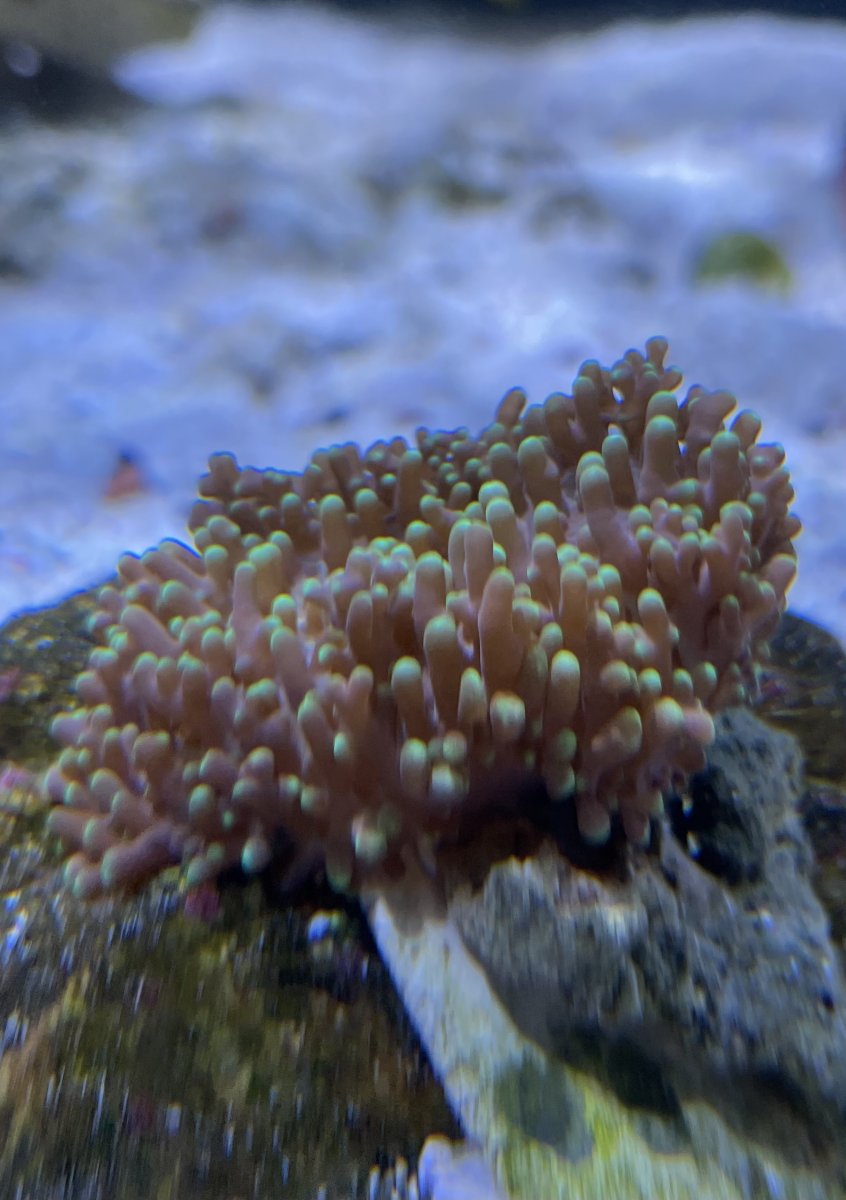 So the Candy Cane has been looking real rough for a few weeks: 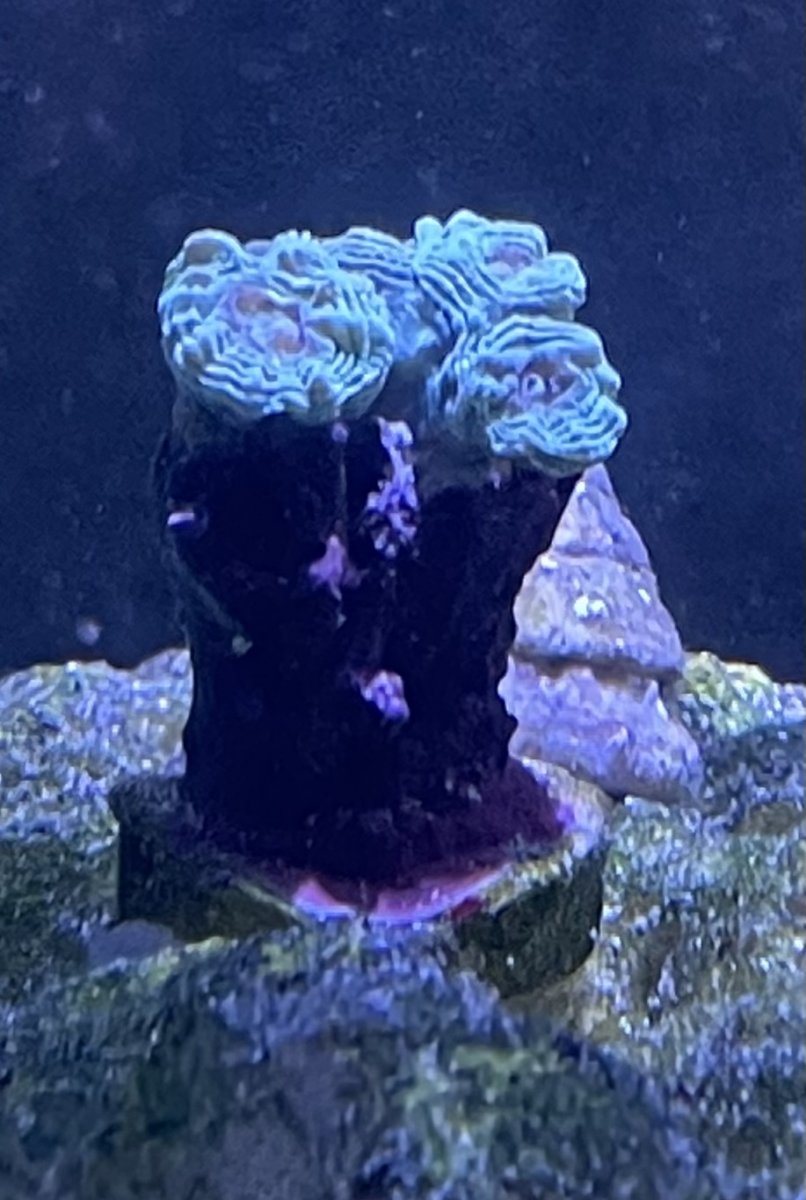 I’ve been feeding regularly so it has been starting look better, I think 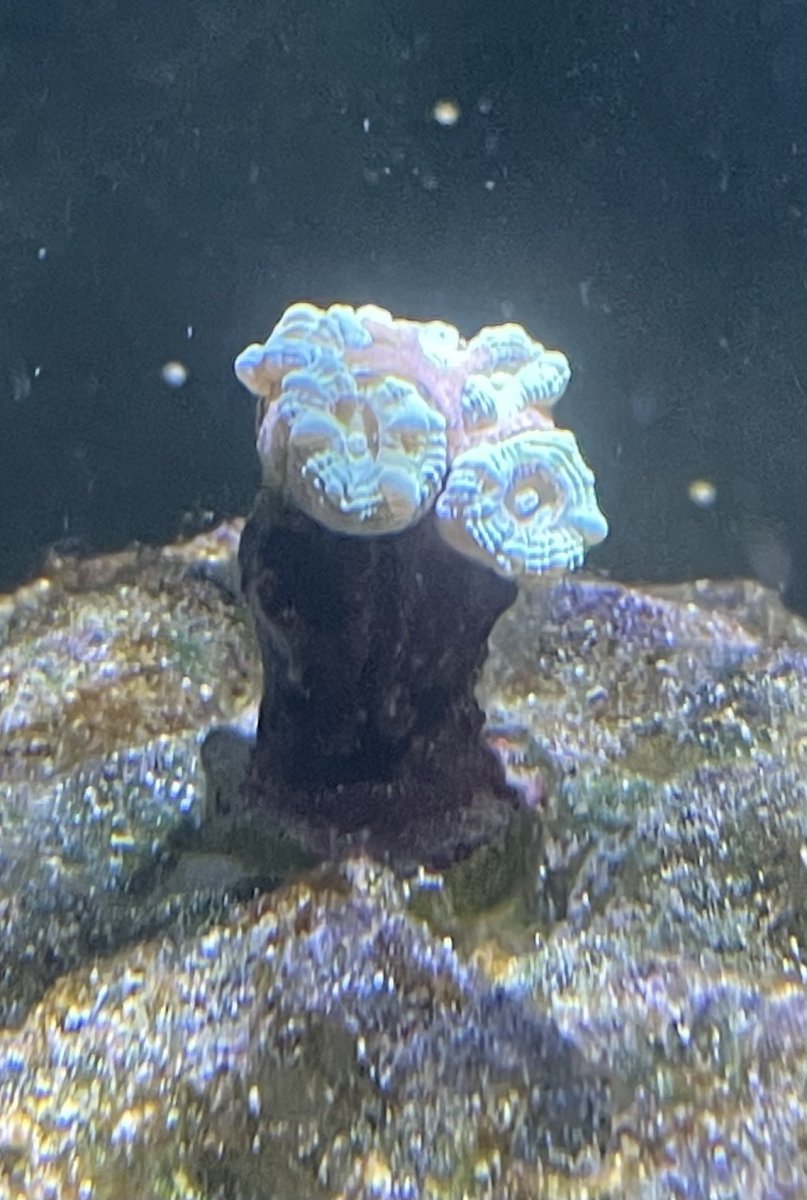 Also, I broke my Birdsnest when trying to catch one of tangs for a fresh water dip (precautionary) and I don’t think it’s going to survive: 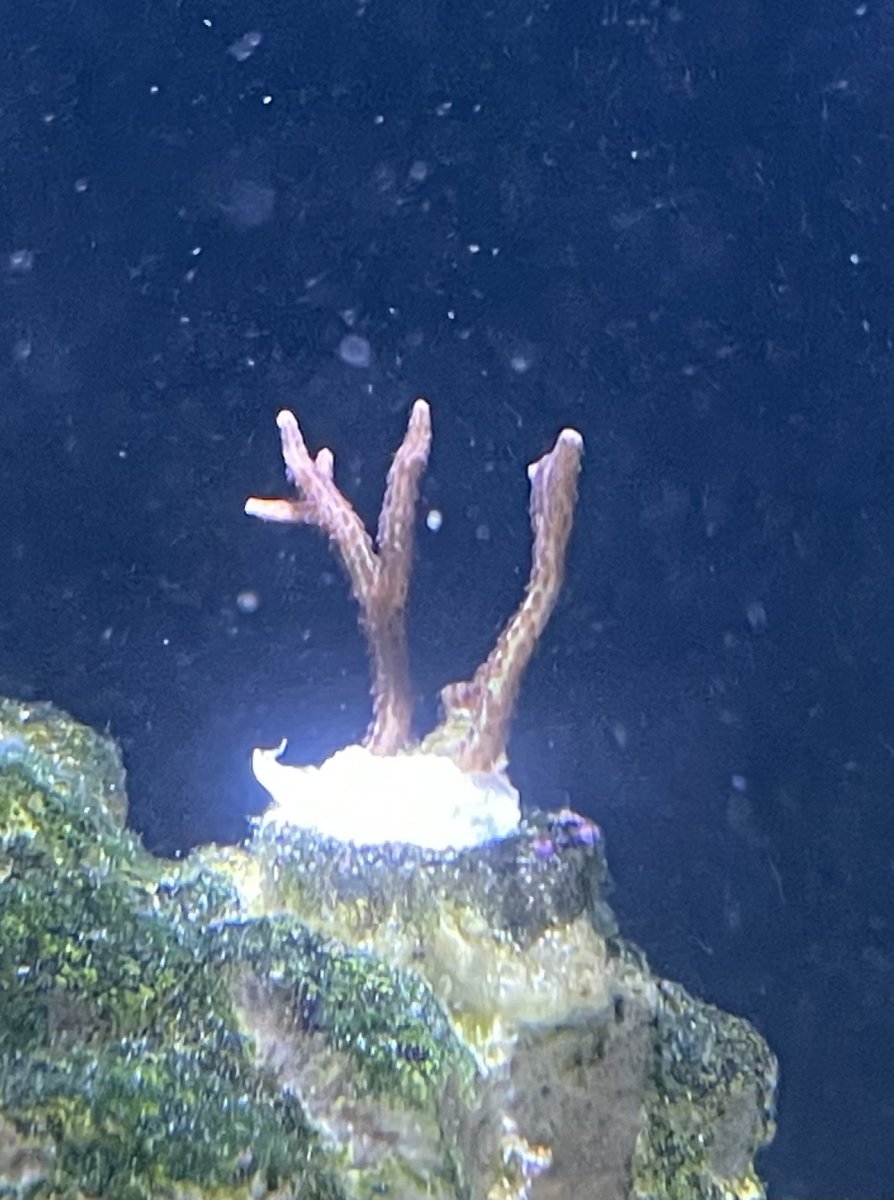 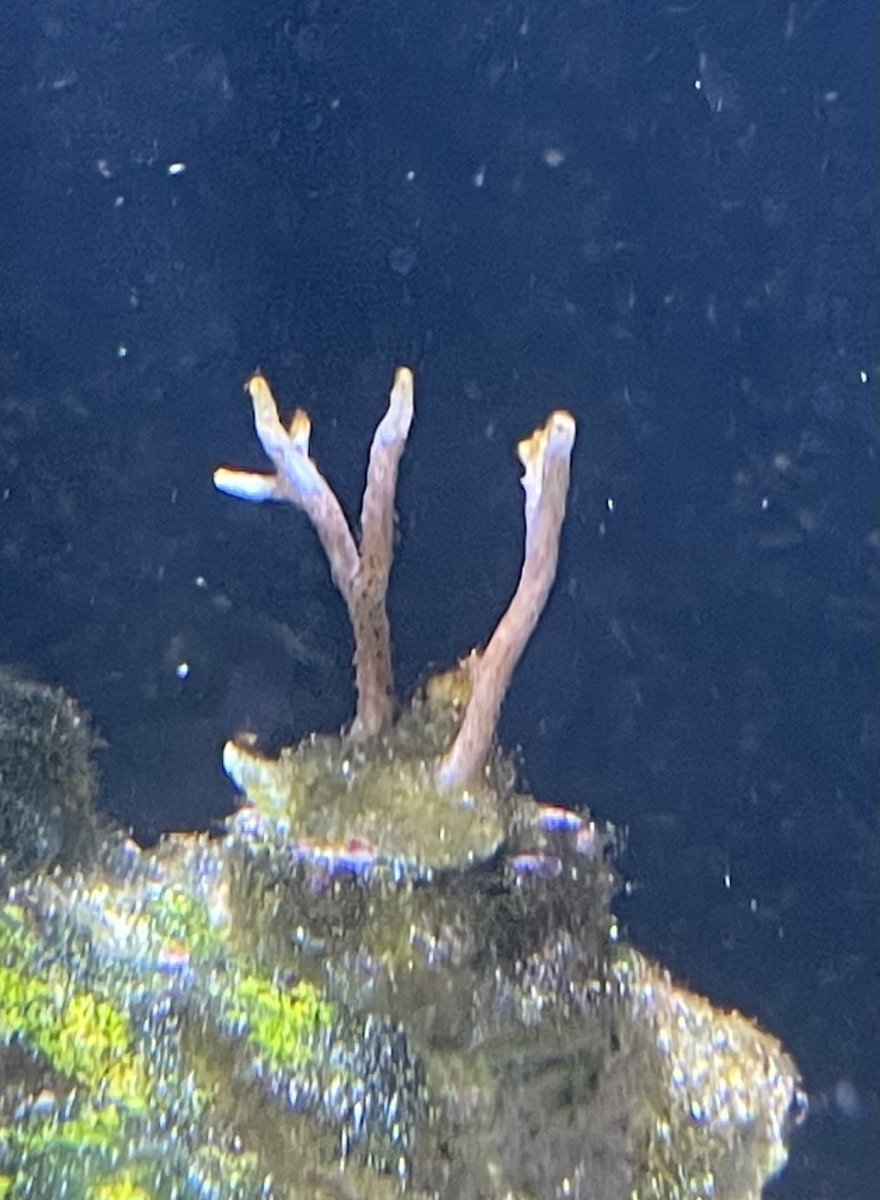 I’m a little sad as I don’t want anything to die but I’ll try and learn from this.

Very attractive tank. However, I think you'd be the first to admit there have been quite a few dead fish just so far-- probably due to some over-excitement of the type we have all fallen victim to at one time or another. You want to enjoy your tank for a long time to come, so especially with the fish (heavier bioload than corals, obviously), maybe tap the brakes a bit. That's my suggestion... and best wishes!!
OP

JumboShrimp said:
Very attractive tank. However, I think you'd be the first to admit there have been quite a few dead fish just so far-- probably due to some over-excitement of the type we have all fallen victim to at one time or another. You want to enjoy your tank for a long time to come, so especially with the fish (heavier bioload than corals, obviously), maybe tap the brakes a bit. That's my suggestion... and best wishes!!
Click to expand...

You know, I do agree with you. The first clown dying, then getting the neon goby to help the other clown but then it and then the 2nd clown dying. Super sad. Then the Urchin. It sucks. The urchin was completely my fault so I do admit that. The clowns were just a surprise especially since I was getting them from the same place as the rest of my livestock which quarantines them. But, a QT of my own is really what I needed. But so far everyone else looks healthy (other than the 2 stony coral). The 2 Tangs, Blenny, Goby, Wrasse, and 2 clowns. I put myself out there as a cautionary tale for those who think they can do the same. Learn from my mistakes.

And just add on to that, it’s not very often you see the tale of a tank as it progresses, both highs and lows. Usually it’s a post like, “Help, my #fishcoralspecies# is #ailment#”. You never really get the whole story. I’m trying, which I’m probably not the only one, to be transparent. To have others read this “story” and learn from it. Rather than people just saying don’t do “this” because of “that”. You, hopefully, can see what happened based on the history that’s listed here. At least that’s my hope. Even if it’s just 1 person that learns from this, I consider it a win.
Last edited: Feb 9, 2021

As a little addition, it is VERY easy to slip mentally into the 'But just ONE last fish' syndrome. We've all been there a dozen times. It is hard to respect the capacity-limits of our tanks with so many beautiful fish at the LFS.

JumboShrimp said:
As a little addition, it is VERY easy to slip mentally into the 'But just ONE last fish' syndrome. We've all been there a dozen times. It is hard to respect the capacity-limits of our tanks with so many beautiful fish at the LFS.

Right? Like right now. My kids are asking me, “What’s the next fish we’re getting?” So I’m like, should I get another one? The tank is not heavily stocked with fish by any means (am I wrong?). 2 tangs, 2 clowns, 1 Blenny, 1 Goby, 1 Wrasse. My plan was to get another wrasse. More specifically, a Cleaner Wrasse. The Skunk Shrimp only cleans the tangs because they’re the only ones that let it. The others don’t. When I had the neon goby it did clean the others but passed away. That was what caused me to implement the UV filter. Now with that in place, the Skunk Shrimp, and possibly adding the Cleaner Wrasse, my current inhabitants will possibly be safe from any issues in the future. This of course assuming I also institute a QT system. Am I going overboard or going over capacity if I add that Cleaner Wrasse?
OP

Today is the first day with these settings so let’s see what happens. I think this is the true cause of the death of the Birdsnest as it was directly under one of the lights. I also think it’s what’s causing issues with the Candy Cane because it’s also almost directly under another Kessil, though lower in the water column, and in the mornings when the light is not bright, it’s nice and open. Let me know your opinions.
OP

So after turning off the UV filter, the copepods have really started to take off in DT. Unintended consequence from turning it off caused an increase in the algae and cyano. Now that the pods are taking off, they’re eating the algae off the glass. I’ve got my LFS to order PNS Probio so as soon as they get it in, I’ll put that in the tank. Did the research on it and it’s a great bacteria and very versatile and can replicate in the aquarium. Look it up. Should help with my biodiversity. Tomorrow I’ll be picking up a cleaner wrasse and some Plankton Bloom from Sustainable Aquatics (phytoplankton, different types of pods, newly hatched brine shrimp and rotifers). I’m hoping some of those survive to multiply in the tank for food and sustainability. Biodiversity.
OP

I’ve gotten a cleaner wrasse, blasto and 3 turbo snails yesterday. After reading so much on having biodiversity and tank stability, it seems having live rock and many coral is the way to go. I’ve waited too long on getting this stuff. I’ve also checked my parameters and they seem to be in check with exception of the nitrates. Still higher than I like at 7.5 ppm. But it is going down. Just 2 weeks ago it was at 40 ppm. Only thing different is adding new live stock. I’ve also have that bloom of copepods and I also added a bottle of Plankton Bloom from Sustainable Aquatics which just adds more live stock (phyto, diatoms... in know.... intentionally..., rotifers, newly hatched brine shrimp, and 2 different types of pods). I also added that live rock to the Refugium which added amphipods and a bristleworm (I’m still torn on keeping that). Next will be that PNS Probio and NSW. Alk at 12 dkh and Calcium at 500 ppm (I use Reef Crystals so that explains the numbers). With the 4 LPS frags in the system I’m hoping to lower those numbers. I’ve had had the SPS (Astreopora) in there for 87 days now but no growth. Possibly stunted by the high nitrates previously? I heard that high nitrates can mess up the calcium carbonate structure? Hopefully having that lower with the all the extra softies phyto and Chaeto will keep lowering the nitrates. I’ve dialed in the skimmer leaving it on fir longer should help as well. For now, here’s a pic of my super ugly tank. Hopefully it gets better from here. 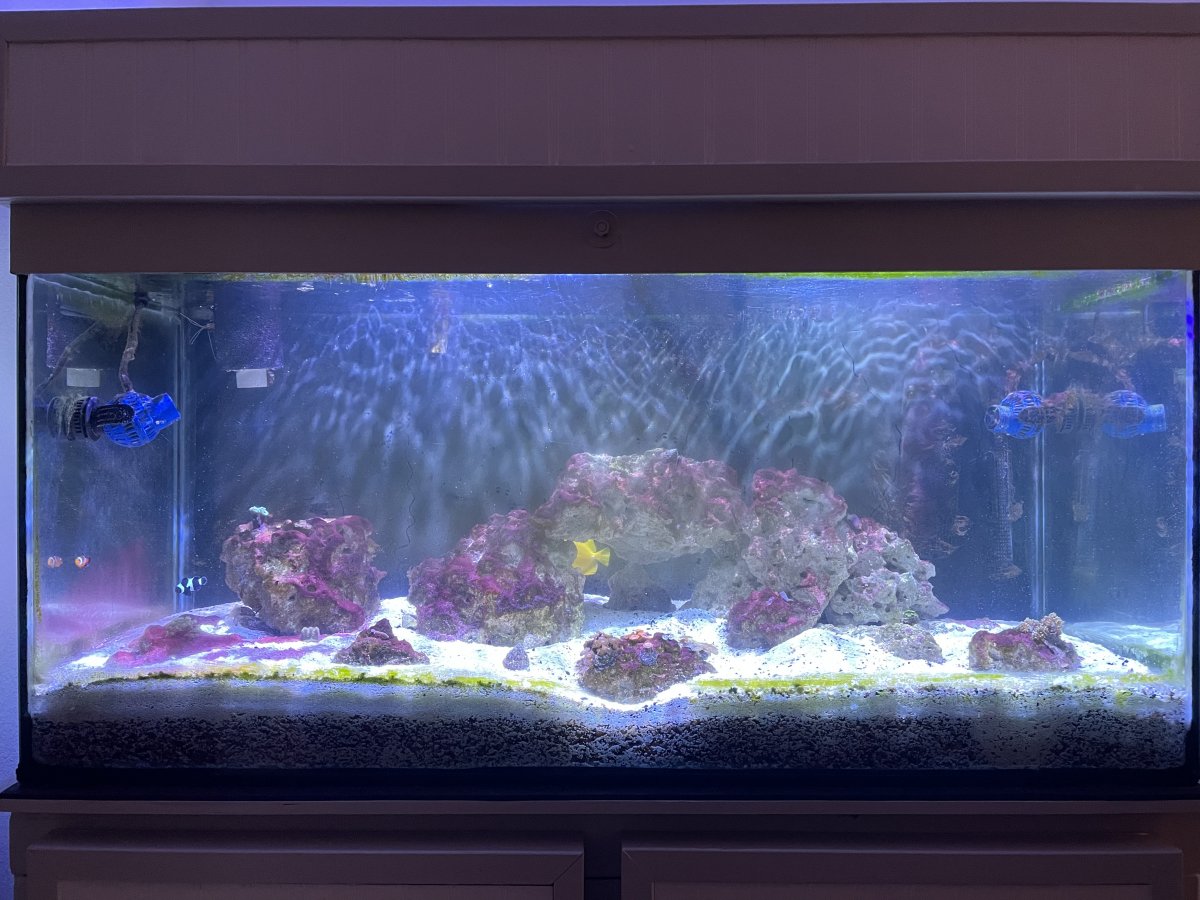 So I have a refugium with Chaeto but it’s not growing like I like. Next up is PNS Probio. Let’s see if that makes a dent in the nitrates.

So, nitrates have slowly been increasing in the tank. Phosphate haven’t seemed to have changed, though.

Feeding too much? Maybe (more than likely). But I’m concerned with the amount of nutrient export. Chaeto isn’t growing. It’s not dying but it’s also not growing. It is a very rich green color. I’ve been turning it manually everyday but no change. So I decided to make a few changes.

1. Upgrade the power heads to DC ones. I ended up doing the Gyre with Sine capability so that I can consistent flow one way.
2. Move one of the old power heads to the sump to create a tumbling effect of the Chaeto. I’m not a fan of this power head there since peices of Chaeto end up going into it and causing it to clog. May not be a perm solution unless I find some kind of foam to cover the outer part but I haven’t seen any mass for a SunSun JVP series power head.
3. Upgrading the light from the LuxBird to a Kessil H80 I bought from a local reefer. Should arrive here in a few days.
4. Started dosing AF Pro Bio S and +NP Pro. Hopefully this combo will cause a nitrate and phosphate drop. I don’t want undetectable levels though so once I get to good point, I’ll slowly back off the dose. I’ve been feeding AF Amino Mix, AF Vitality, and AF Build for a while now. After doing research, I’ve been feeding too much of that which is causing a Cyano Bloom in the tank. So maybe a combo of too much Amino and Vitality is causing the high nitrates. I’ll stop the feeding of those and will begin again once the nitrates are where I want them and will start with one drop and work my way up to the correct amount, slowly.
Last edited: Mar 16, 2021
OP

So I don’t know if it was the higher flow from the Gyre or the Pro Bio S, maybe a combo of both, but the Cyano is all but gone in the tank. Yesterday I saw it get reduced and then when the lights came on I saw some on the rock work and didn’t seem to go away then I dosed again and then most of it went away before the lights went out. Also the filter sock was super dirty, like I didn’t swap it out in a week. I’m cautiously optimistic. Also the new Acan I put in the tank over the weekend seems to be doing real well now. Didn’t seem to open until today but it could have still been acclimating.
OP

So here’s an update today. Again, looks like cyano is almost completely beat. It’s hanging on at the top of the middle rock but it’s definitely losing the fight against the Pro Bio S bacteria. 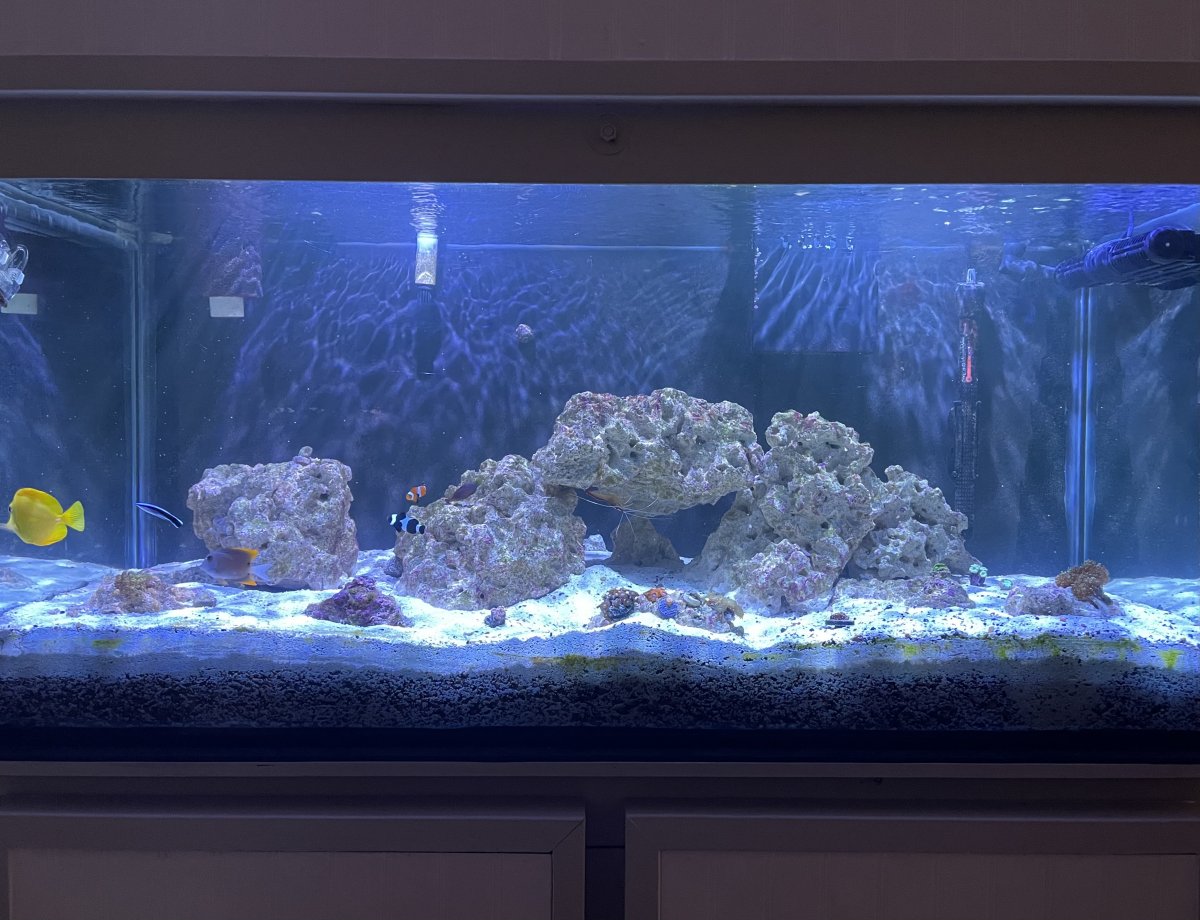 Very sad news to report. My Yellow Tang died. Essentially the root cause is a bacterial infection but his demise was exasperated by my over reaction. I did a fresh water dip (hindsight, this probably did nothing for the infection) then I dipped him in a Ruby Reef dip. He was stressed from trying to catch him and the fresh water dip. Since he was already stressed from the infection, I did him in. I’m so mad at myself. Why did I do this? Why didn’t I research this first? I had an iodide solution so I could have spot treated his marks. Ugh!!! I’m sad, I’m mad, and this is after my tank has started to look good too! LPS coral have puffed up nicely. I’m getting good feeding responses from them. The rest of the fish, I think, look real good. I’m going to replace him but I’m going to wait about 2 months to make sure everything else is good. Ugh.
Last edited: Mar 31, 2021

Banggai Cardinal not eating in QT