In late november my nitrate went down to 0, due to some silicate, organic iron and nopox dosing (it was my mistake, did not pay enough attention). Algae and bacteria growth consumed most of it (and some of it the corals). Corals started to pale (my red plating montipora is the first to show signs of starvation), so added some sodium-nitrate (I usually try to keep my nitrate around 2-3ppm), then few days later my phosphate also dropped to 0 (measured with Hanna), so dosed some creatine-phosphate. After corrections all was good, no losses. Got the NO3/PO4 levels back to where I like them to be. But since these events slowed my coral growth, my kH went up to 11+, so decided to stop my dosing pumps for a day, then turn them back on the next day (I prefer kH around 8-9). This was my second mistake in november (was not my best month), I forgot to turn them on. Only a few days later, in the weekend when I usually do my regular inspection, realized something is wrong. kH dropped to 5.3 (measured it twice). Never thought can drop this low. Slowly raised it (1pp/day), and luckily did not loose anything this time either. Glad most my corals are not sensitive ones, they fogive my mistakes. But cyano thought it’s his/her time. After those swings I think it is normal for cyano to show up. Can’t blame it. Also early december one of my clowns disappeared in the sump, not sure what happened to him. Guess it got eaten/dissolved.


Earlier I used to freak out when I saw red slime spots, but not anymore. Since I don’t change water and organics are buiding up, I get cyano 2-3 times a year. It usually takes 2-3 weeks to get rid of it. Not this time. This december it decided will stay for the holidays, did not want to go away. Next to the powerfilter and substrate stirring I started dosing some hydrogen-peroxide, hoping it will help. After dosing it for 2 weeks, I stopped, since nothing happened. Now, a few weeks later cyano is disappearing slowly, all I did in the past 2-3 weeks is to blow it off the rocks with a turkey blaster and stir the gravel once or twice a week. Despite the fact that my nitrate is around 15 (record high for me, never had it above 10 before) and phosphate as high as 0.1, everything is doing great.


Well, what is the reason I’m writing all this? Earlier I experienced some swings, but these were the most extremes for me (nitrate from 0 to 15+, phosphate from 0 to 0.1, kH from 11 to below 6). All these changes took place in 3-4 weeks, or maybe less. To my surprise, none of the corals died. I know I have some less sensitive SPS, but still, these are quite big changes in water parameters (I think). Reason (I’m guessing here, these are my theories) is that I try not to change these parameters suddenly, and that I keep corals well fed. At least try not to starve them. I do not target feed corals, but:
- I have lots of fish (21 in 100gallon), I feed them 2-3 times a day (they poop and pee a lot)
- always ensure there is enough bacterioplankton available (most of the time don’t let N&P drop to 0 and dose carbon constantly, so none of it becomes limiting factor)
- I also ensure I always have algae on my glass (dose silicate every week and extra iron if needed). I have to wipe my glass panels every 2-3 days which is a great phytoplankton feed for corals as well.
- Plus, I believe, that if there is enough nutrition for algae, then zooxanthellae are also getting what they need (I think).


The second reason I’m writing all this, is because of another event, for which I do not have a theory (in most cases we all have our own theories, don’t we?). In mid december (after I lost a clown and started dosing peroxide), also about that time when my nitrate jumped from 2 to 15 (but don't think this is the reason) my corals started „blooming”, it was like springtime for them. I could see a huge difference in their growth. It lasted maybe 2 weeks. Now after a month, nitrate is still 15 (as it was then) and phosphate still around 0.09-0.1, but growth is back to ’normal’, meaning it is still happening, but not at that rate. At that time something got into the water, some nutrition, some organic stuff from the dissolved fish and/or from the dissolved organics that was caused by peroxide dosing… I don’t know, but corals liked it and they were happier than they usually are. I have no clue why or what. Wish I did a Triton test then… 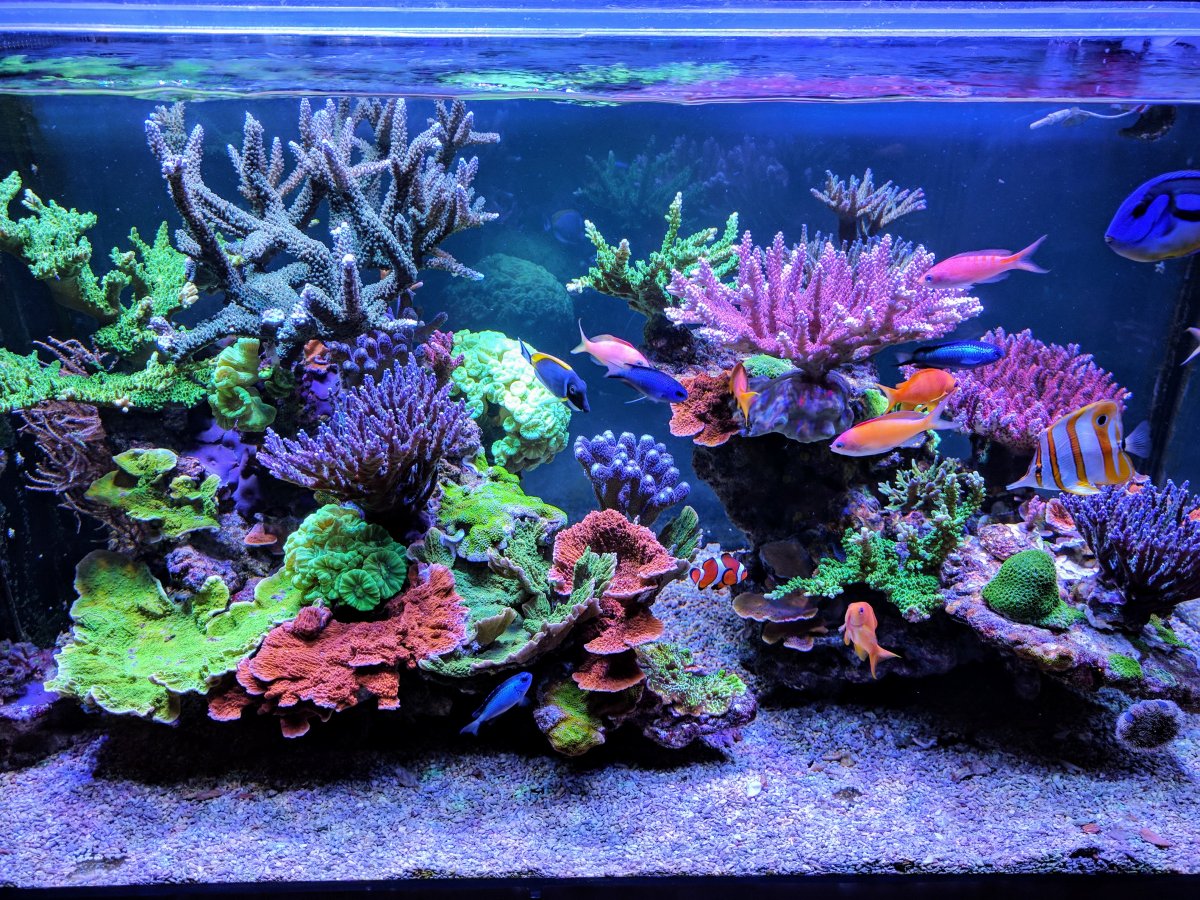 So, this is how the tank looks after all these events… You could not tell from the picture all these happened.

Beautiful tank. After all that I think I would have wiped out my tank. You can see the growth in the acros compared to previous pics.
OP

Seems like my 9year old got "infected" by the beauty of saltwater life... 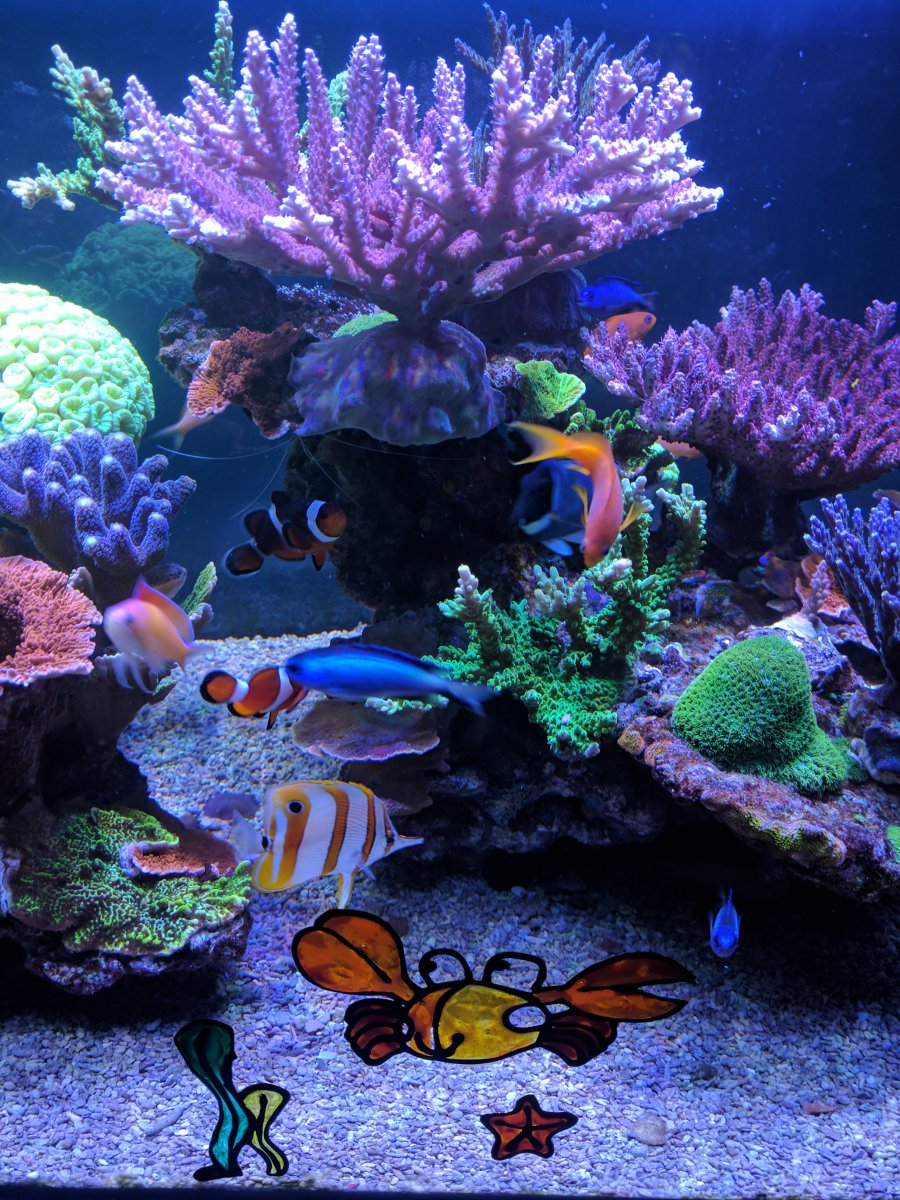 mazoli said:
Seems like my 9year old got "infected" by the beauty of saltwater life...

Just bumped into a picture taken last year (2016) in April, about a year ago.
I was battling cyano at that time, just coming out of it after about a half year struggle. 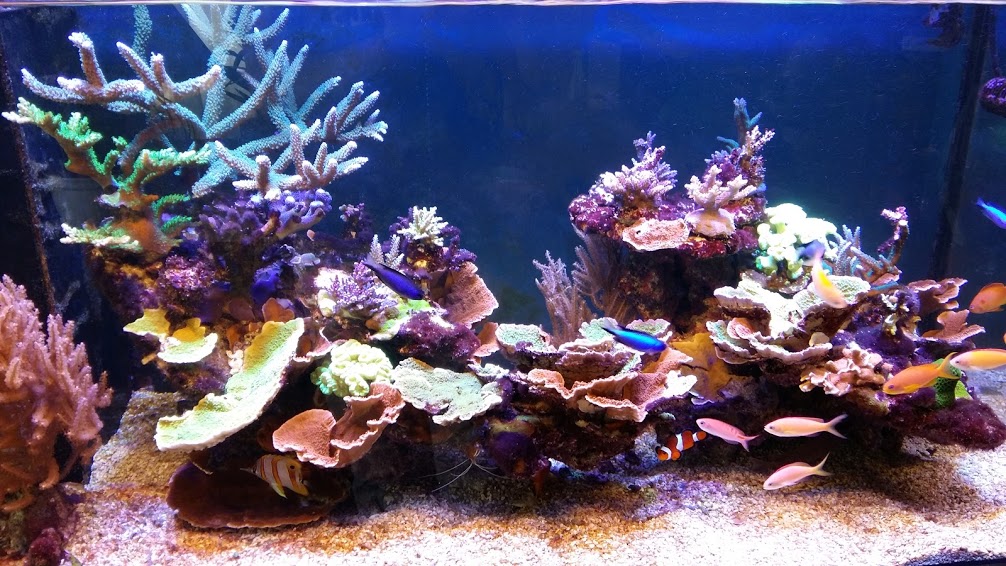 And this is snapshot taken today. The left side staghorn and plating montiporas are cut back strongly about every 3 months, this picture is showing a cut back stage: 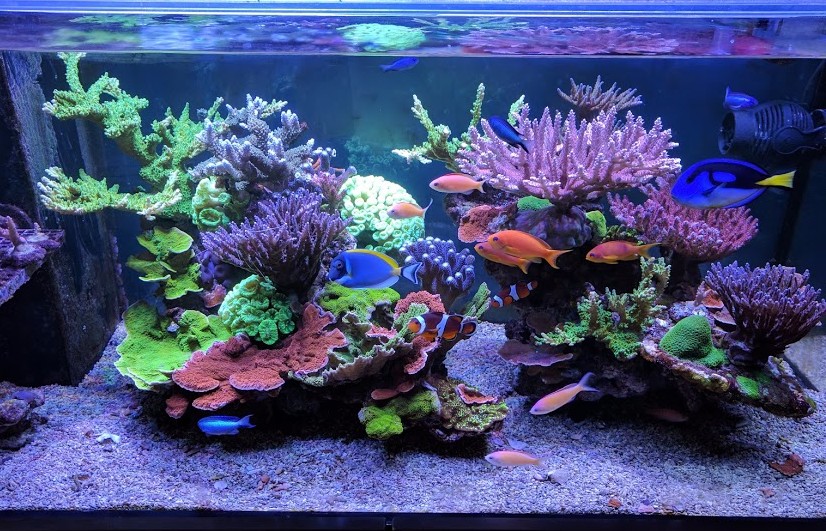 All corals raised from small frags, last SPS I got was in the summer of 2015. 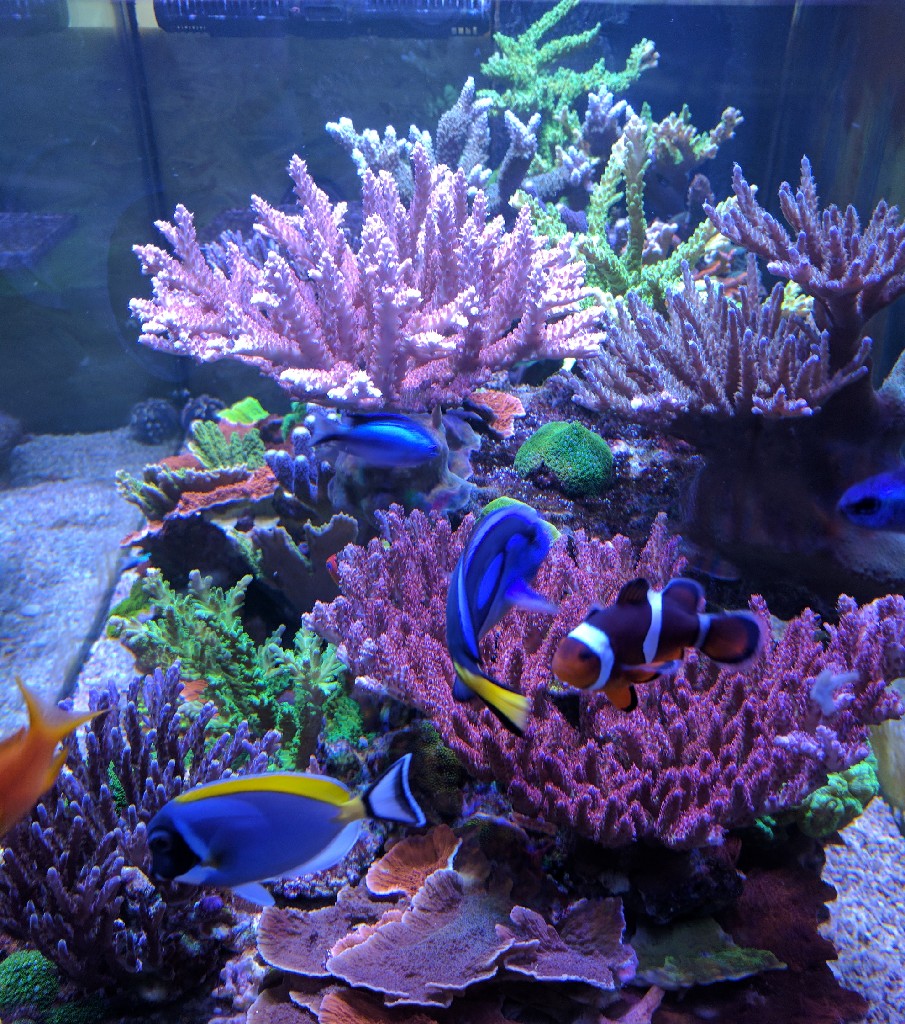 Did a Triton test about a month ago, these are the result values. Adjusted 'S' since, with MgSO4, did not notice any difference. What do you think about other values? Si is high because I just dosed waterglass before the test, was curious about measured value...

Originally when I set up the aquarium, I built a very "thin" shadowbox, only about 1.5inch deep. I have a led strip on top, which lights the box 2-3 hours before and after the main lights are on. In the past it was empty, meaning no rock or coral skeletons were added, whatever design I tried it looked "artificial", so I just gave up on adding anything to it. It was a plain blue box (still looked nice).

Now tried something different. I had some artificial (plastic) corals on hand and decided to give it another try. This is the work in progress: 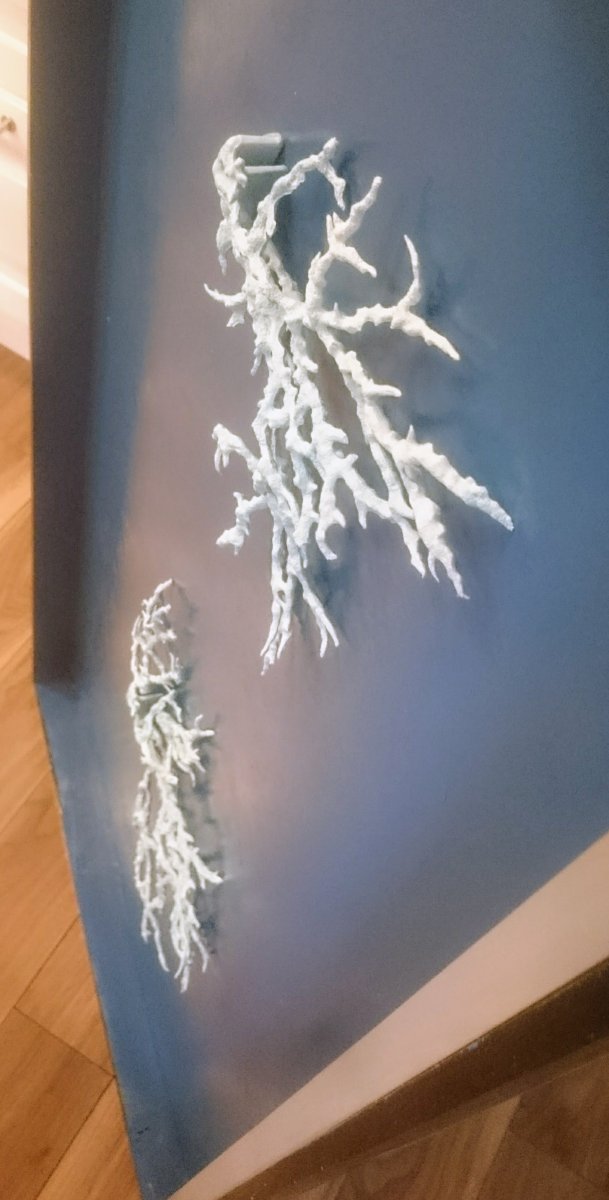 Tried to place them behind the main reef structure, so could blend in more naturally into the background. Glued it with gluegun, then trimmed some branches so it looks more irregular (original ones were very simmetric). These picture taken in the morning with only the shadowbox leds and some natural sunlight. I like the way it finally turned out (sorry about the reflections, could not take pics without) 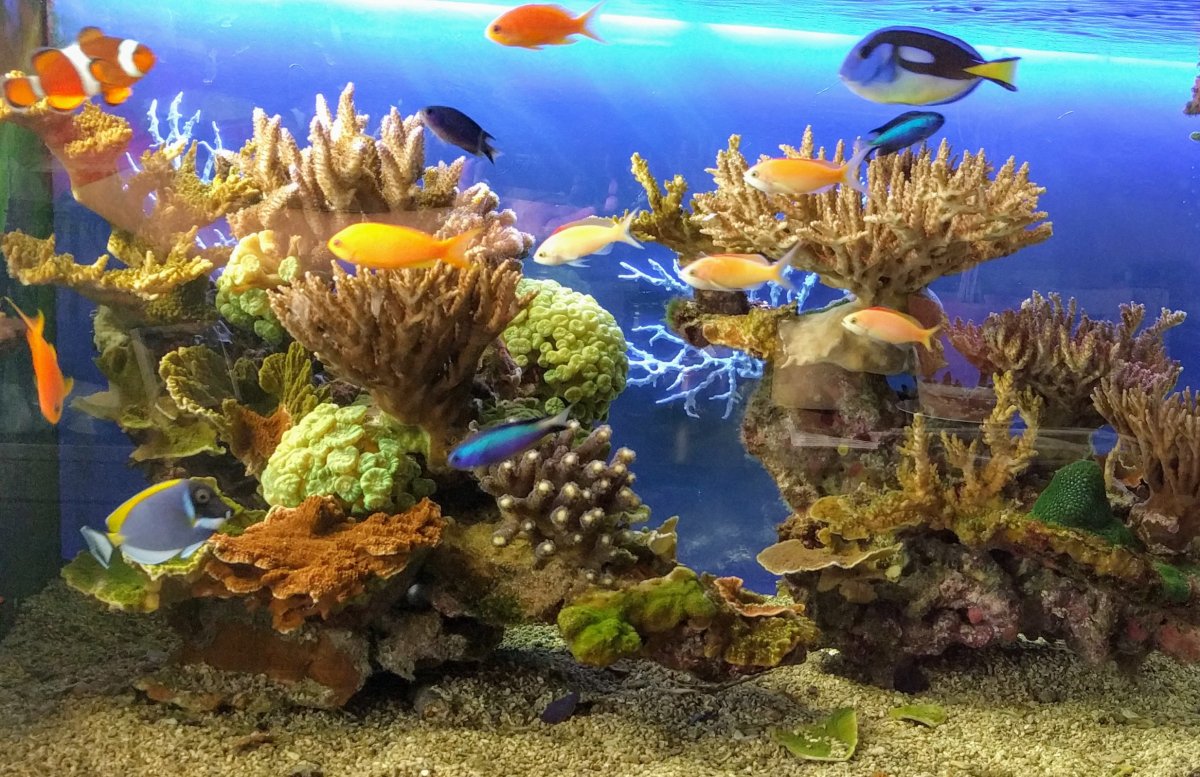 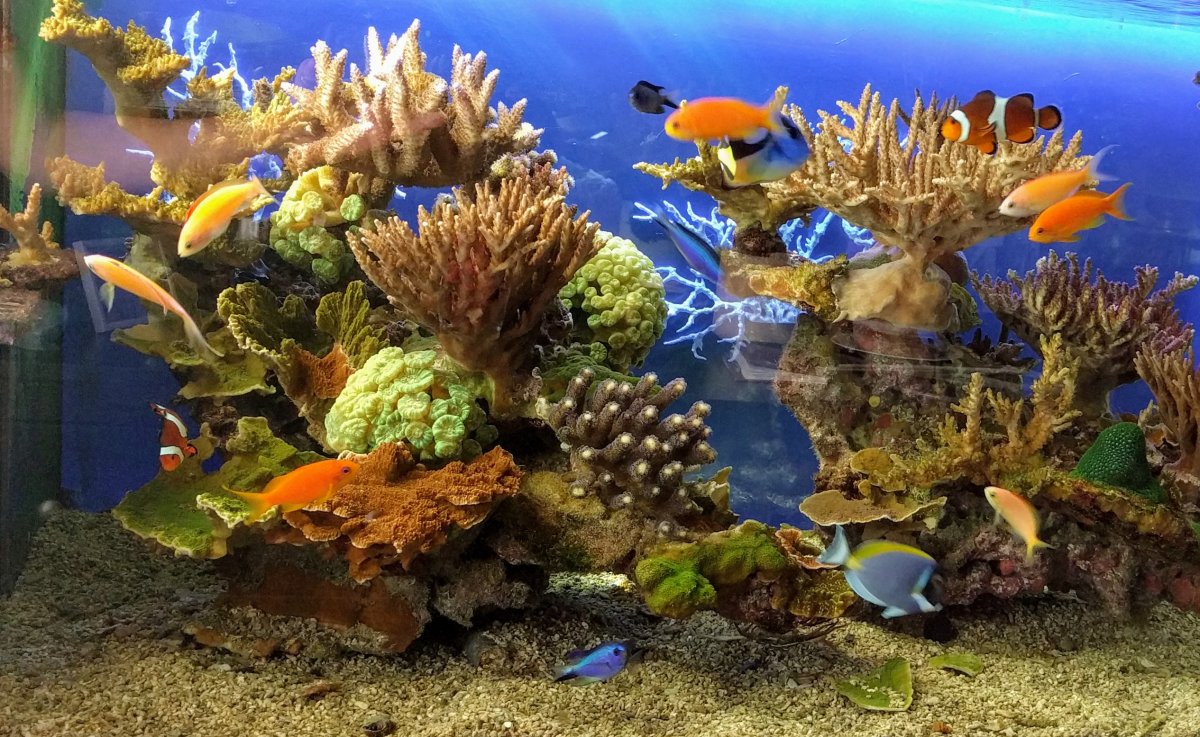 Did a video with shadowbox and lights on:

Had some poisoning (maybe metal?), and still struggling with dark brown/black hair algae, but at least nothing died recently.

This is the current situation:

mazoli said:
Had some poisoning (maybe metal?), and still struggling with dark brown/black hair algae, but at least nothing died recently.

This is the current situation:

Your tank still looks good.
A

The tank looks stunning, maybe not the best at the moment , but in general very beautiful reef
OP

Well, thanks for the encouraging feedback. 5 months ago looked much better, I just wanted to show that sometimes things can go wrong, and like with pretty much everyting in life, this hobby has it's ups and downs.


In this first photo I circled 7 acropora colonies that died during the past few months: 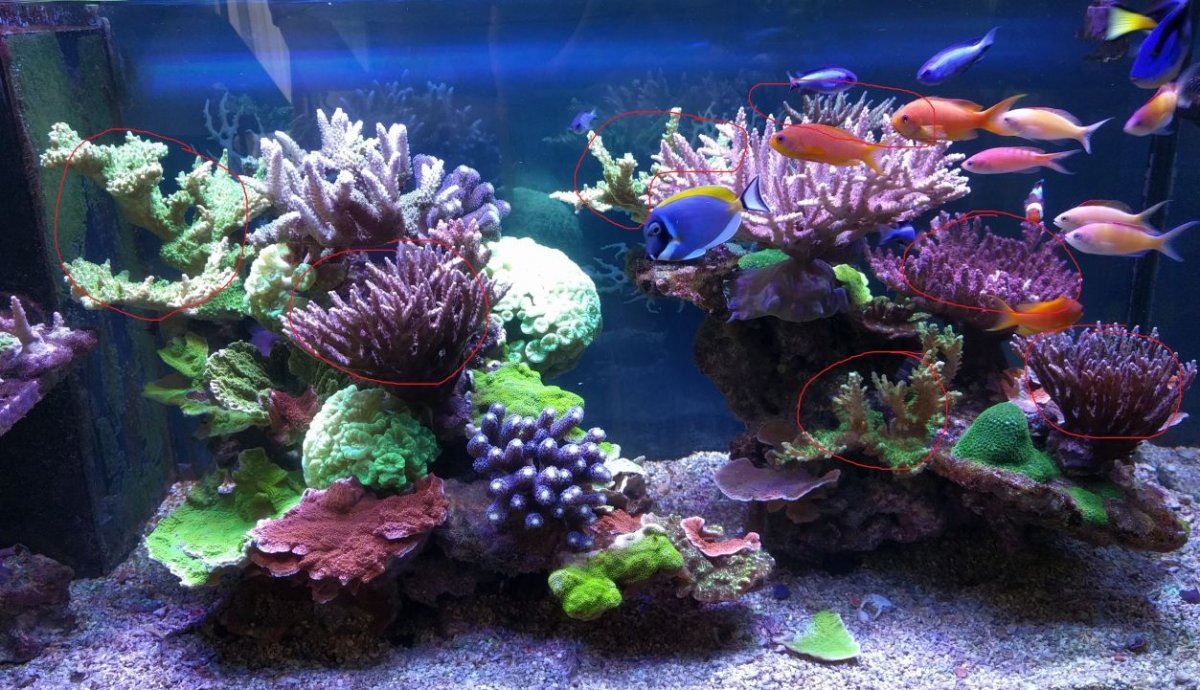 And this is how it looks today: 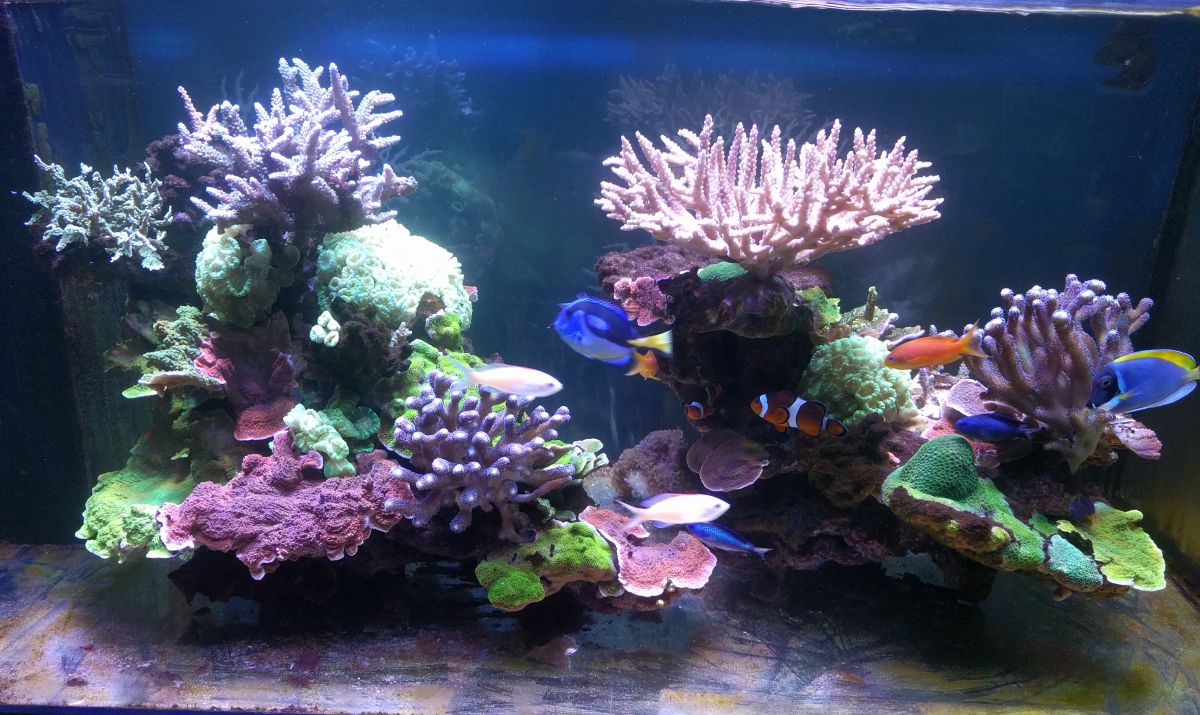 Still getting that ugly dark brown (almost black) hair algae on some rocks and dark brown algae on glass, but at least corals stopped dying. Did a Tr.Detox cure about 2 months ago, then noticed some polip extensions, but it was just a temporary improvement, recently I noticed the same stressed corals as in the past 4-5 months. This past weekend redid Detox cure again, hopefully will see some long time benefits.

Beautiful tank. I'm sure it'll come back better than ever.
OP

Tank is slowly getting back to normal, so it is time to make the planned modifications. It is running for more that 3 years, and rockwork is becoming 'boring'. Been thinking about changing the layout, the plan is something like this (slope like reef pieces, 3 standalone "modules" with the leftmost rock pushed to the glass and partially covering the box):

The new rock I built is the leftmost piece, which looks like this: 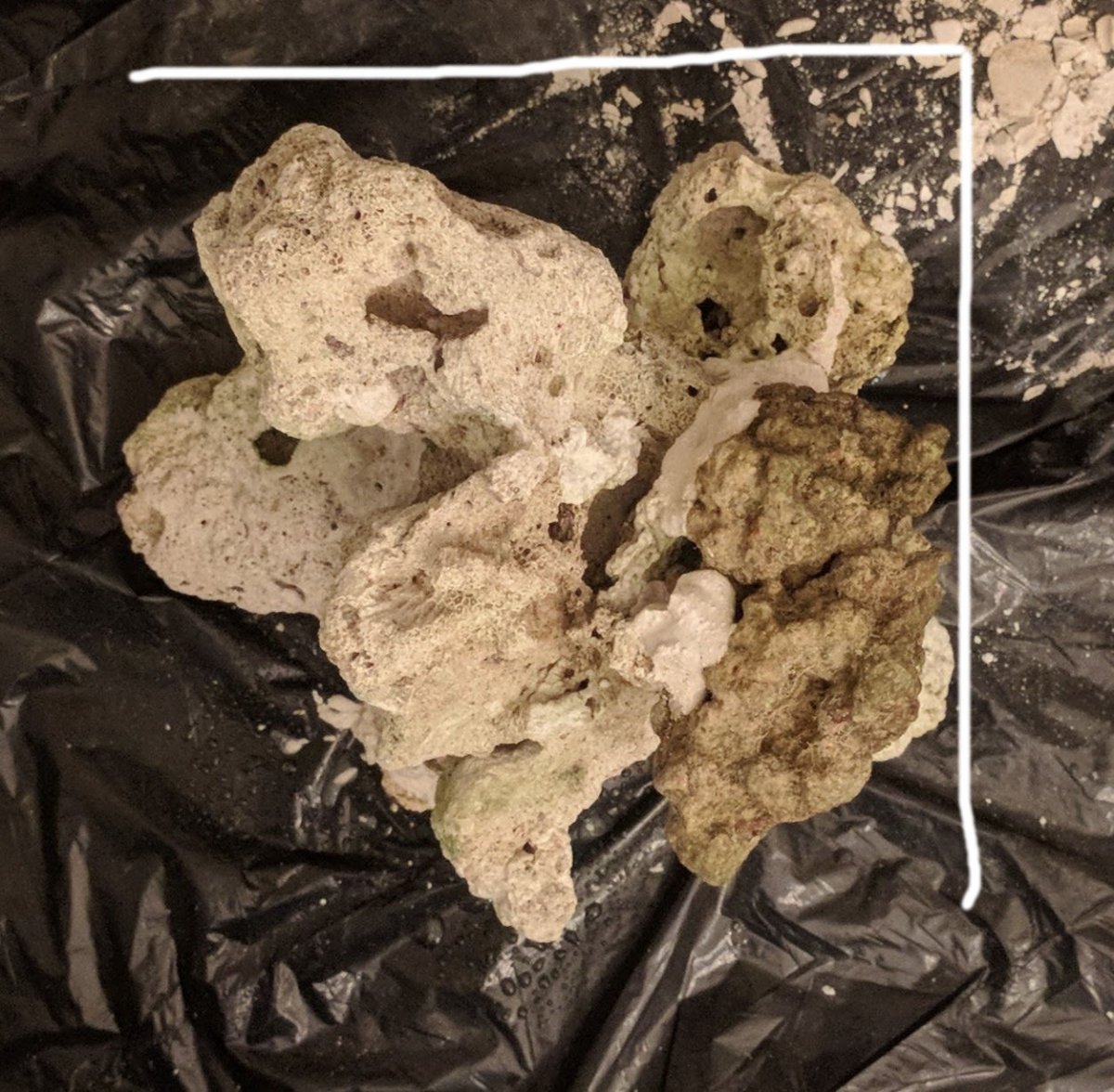 Started curing it in a bucket with fresh saltwater and a stream.

Any idea/suggestion, for how long should I run it separately to see if it is leaching phosphate or not? It is old rock, got it from a follow reefer more than a year ago, is been sitting dry for years, and have no idea about rocks previous "life". 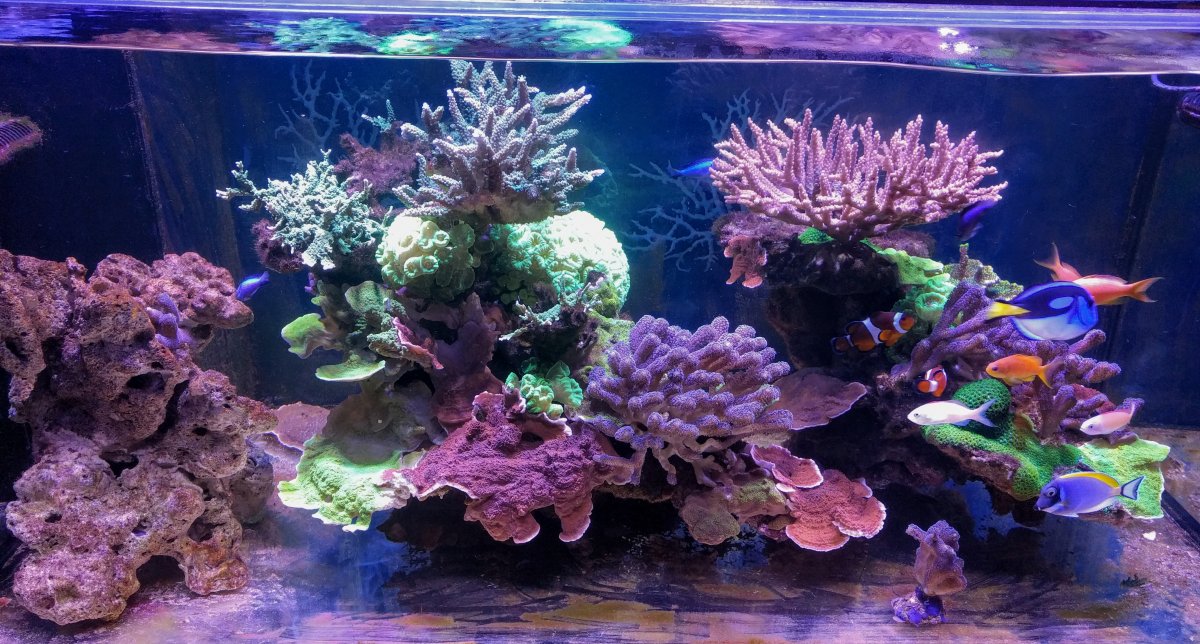 It's getting back into shape 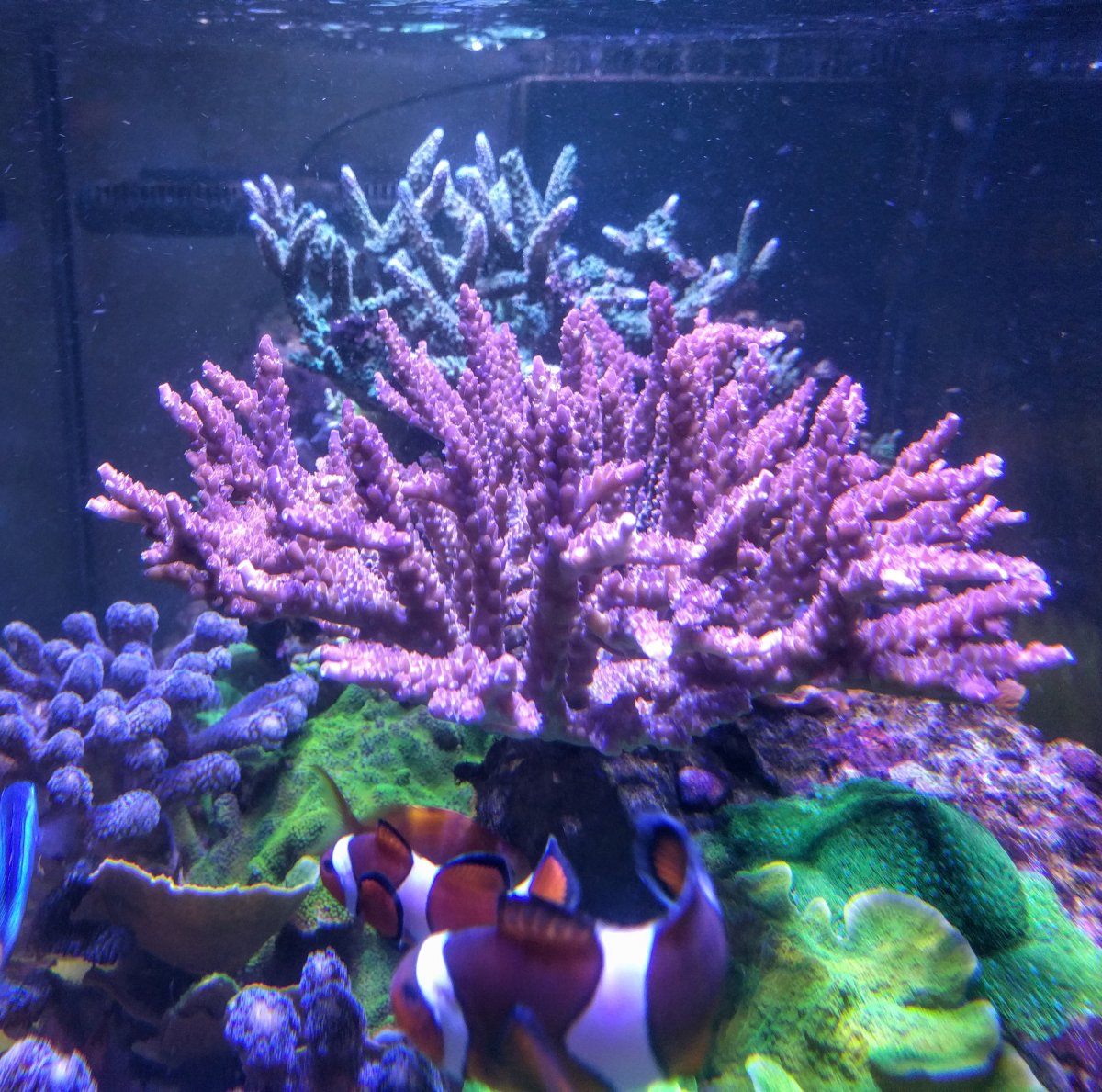 Beautiful reef. Did you ever find out what caused the SPS to die? Or what that algae was?
OP

Not sure. I'm just guessing that the magnesium-sulphate I bought to raise the sulphate concentration was of poor quality (food grade quality) and got mixed in some metal and phosphate, etc... Algae are coming and going depending on nutrition, it just got consumed and went away.

Hey @mazoli how is the tank these days? Any new updates? It was heartbreaking to read through and see the struggles you've been through. I can relate as I had a slow crash at the end of last year that I'm still picking up the pieces from.

V
Hello What do you think I should know before starting my own tank?
2