First started in reefing about 4 years ago when Biota ran a Kickstarter for an all-inclusive Evo 13.5 reef setup. Over that time it's grown into our favorite little entertainment as my wife and I have the nano right next to our dining table....we watch our goofy clowns and enjoy the several corals every day.

So, a few weeks ago, as an awesome new LFS opened about a mile from our home, we decided to go bigger! Just set up our first "big boy/girl" tank as a living room centerpiece. It's a JBJ 65 AIO with the two stock return pumps (396 gph), 2 IceCap gyre 2k wavemakers, Kessil AP9X light, a JBJ titanium heater, a JBJ skimmer, and an Icecap ATO.

Looking to add a UV sterilizer when the cycle is complete.

Built the aquascape last week using Aquaforest dry rock, AF Stone Fix, and AF Bio Sand. Added water and ammonium chloride to get the tank to 4 ppm and then added the Bio Sand bacteria, bacteria food, and two bottles of Turbo Start. Tracking the cycle now and patiently waiting to add our first fish. (Pics of the scape just before we added water attached here)

The plan is to make this a mixed reef with some softies, several LPS, and a few reef-safe fish. We'll likely get a snail-based CUC and perhaps an invert or two at some point, like a pistol shrimp to go with a fun goby (maybe a Watchman?). Eventually, the clowns in our nano will move over with some of the corals in there as well. For other fish, considering things like Blue Spot Jawfish, a small group of Zebra Barbed Dartfish, a peaceful wrasse like a Flasher or Fairy, and maybe a nice dottyback like a Splendid.

For coral, my lfs was kind enough to sell me a stunning trachy they will hold on to and care for until the tank is ready for it. That guy will live front and center in the sand. Of course, I'd love a torch or two to wave about in the flow of the water and I'm a huge fan of scoly's and rock nems. Lower down we'll have some acans and blastos and in various rocky spots some mushrooms and maybe, someday, one of those wild multi-colored chalice. Eventually we'll consider a cynarina as well.

So excited for this adventure over the coming months, and years!!

Welcome to your new home for saltwater reef aquarium resources and fun! Welcome to the family!

UPDATE - 10/3/2020: Just in time for our 11th anniversary we reached the point in our cycle to add our first bit of livestock!

We have an Evo 13.5 nano that's been established for over 3 years. Small hammer and a clown in there among other livestock - clown has been hosting the hammer. Since the parameters match between tanks we moved the clown and hammer to the "big boy" tank yesterday afternoon along with a boost of Dr Tim's One and Only and a 15% water change.

Clown did some exploring and readily ate both last night and this morning. The hammer is just about fully opened up this morning as well!

Planning on giving it a week or two and re-testing parameters.....if all looks good, we'll move another coral from the nano and add another small fish.

We're on our way!

UPDATE - Tank has been cycled for a few weeks now and it's already been a joyous learning adventure!

When the cycle finished we transferred Chloe, our little clown, along with "her little hammer" from our Evo 13.5 to the 65 gallon and she has been loving it. The hammer has also been quite happy, puffing up bigger and bigger each day it seems. We've been testing the water and doing 10% water changes weekly and things seem to be moving along well. 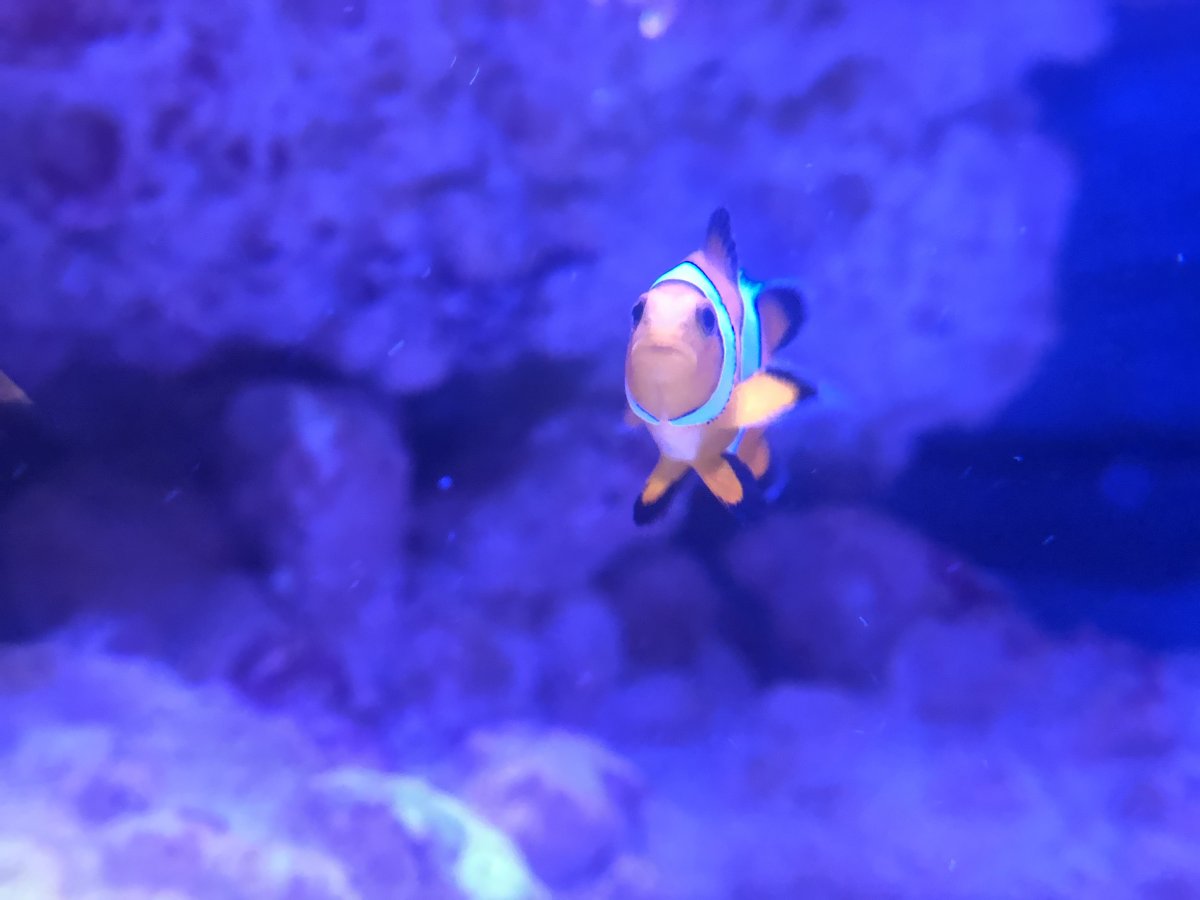 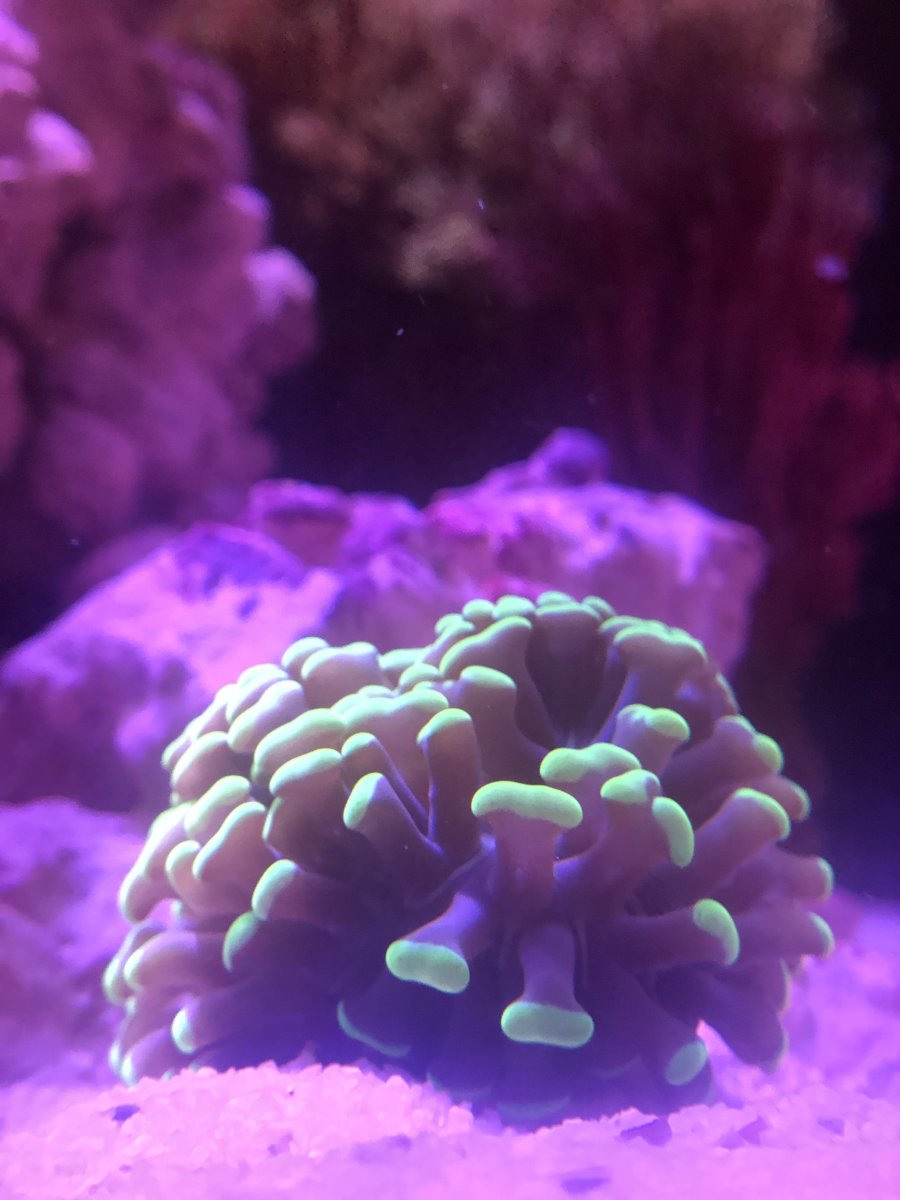 A week or so later we got our Aqua Ultraviolet Advantage 2000+ 15 watt UV filter and installed that. Linked to a Sicce running at about 225 gph it is running at a rate for both algae and pest management which seems to be keeping the tank fairly clean and giving me peace of mind.

The uglies definitely started so we also added a couple small trochus and two nassarius snails.

A week later, with water test coming back good (no ammonia, nitrates at 6) we added fish #2 - an adorable, grumpy looking Yellow Watchman Goby 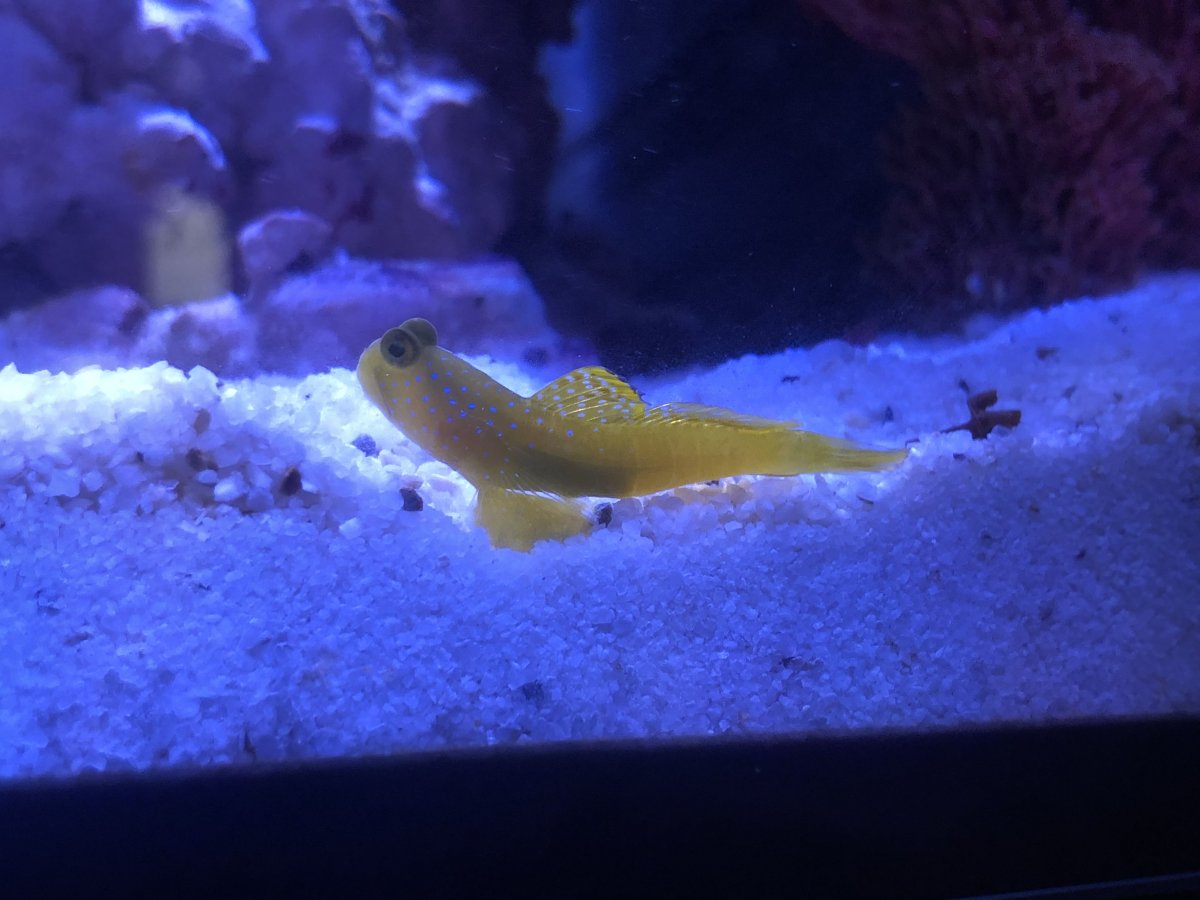 What an learning opportunity that turned out to be! The next morning I excitedly came downstairs to greet the fish only to discover the YWG was nowhere to be seen. We have a glass top on the tank that essentially seals it so I struggled to see how he could have jumped out....but it isn't 100% sealed and we do have a cat so I couldn't dismiss it right out.

I popped onto R2R and read about other's experiences - several people mentioned getting a YWG and it disappearing for days, even weeks, before emerging again as it got comfortable.

To be sure, I got on a ladder and looked down into each filter chamber in the back with a flashlight but couldn't see anything. So I waited. And waited.

The next week I shut down the pumps to do a water change and clean the filter socks. Lo an behold, there he was at the bottom of a filter sock! Somehow he had squeezed through the slats to the filter chambers and got stuck in the sock.

He was still alive! We immediately put him back in the display and he's been there ever since, going about his business like nothing happened. Phew!

Two weeks ago, with the weekly maintenance, we moved our over-sized pipe organ coral from the nano to the big tank. It looks so much smaller in the 65! 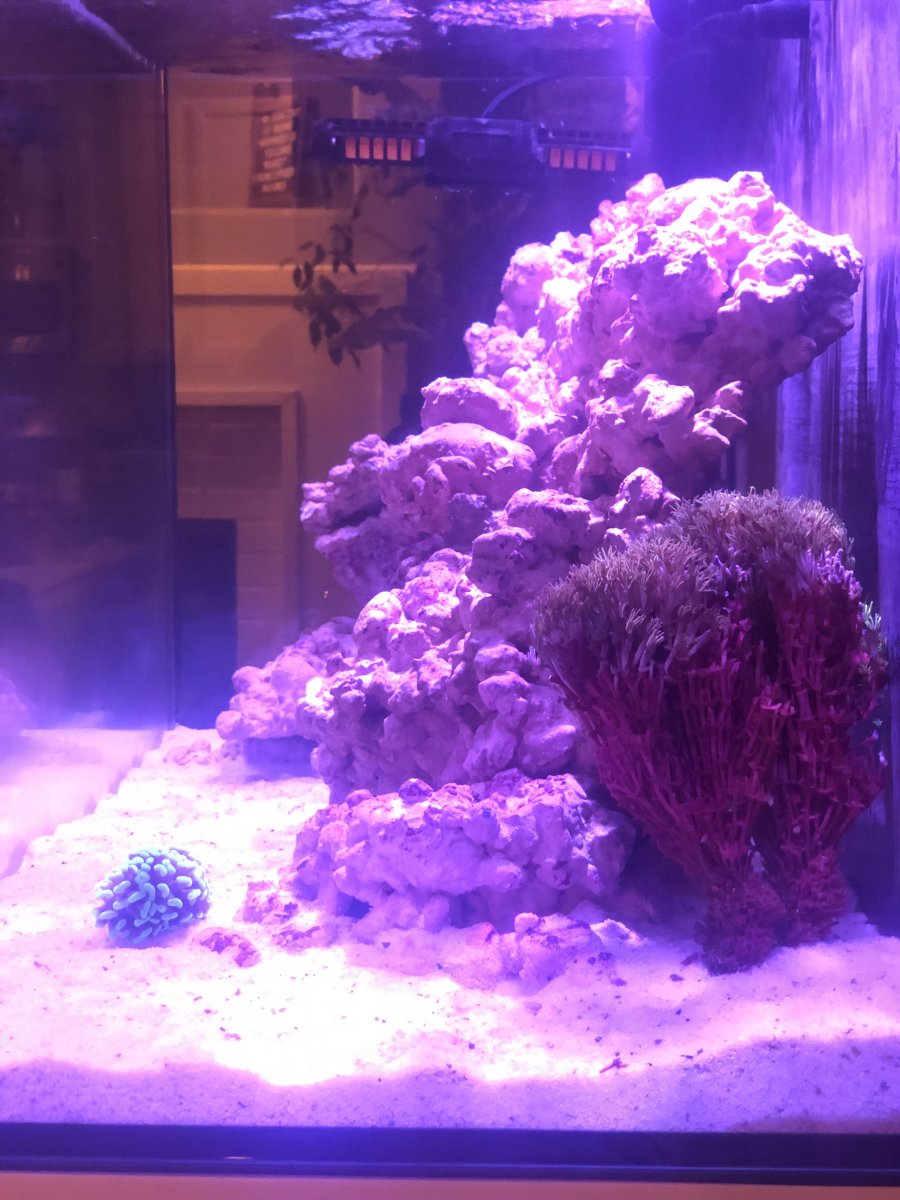 And this past weekend I had another learning adventure. We have several rock nems in the nano, most of which are on a chunk of live rock. Ideally we'd move them to the big tank but I do not want to move the live rock (doesn't fit the aquascape very well) and I have no clue how to get rock nems off craggy rocks!

But one rock nem went rogue about a year ago and was in the sand bed, attached to the glass at the bottom of the tank. So, having watched the LFS do it several times I took a few deep breaths and, with my wife's support, gently nudged him into releasing his foot from the glass. And it worked! He's now in the 65 and looking happy as can be. 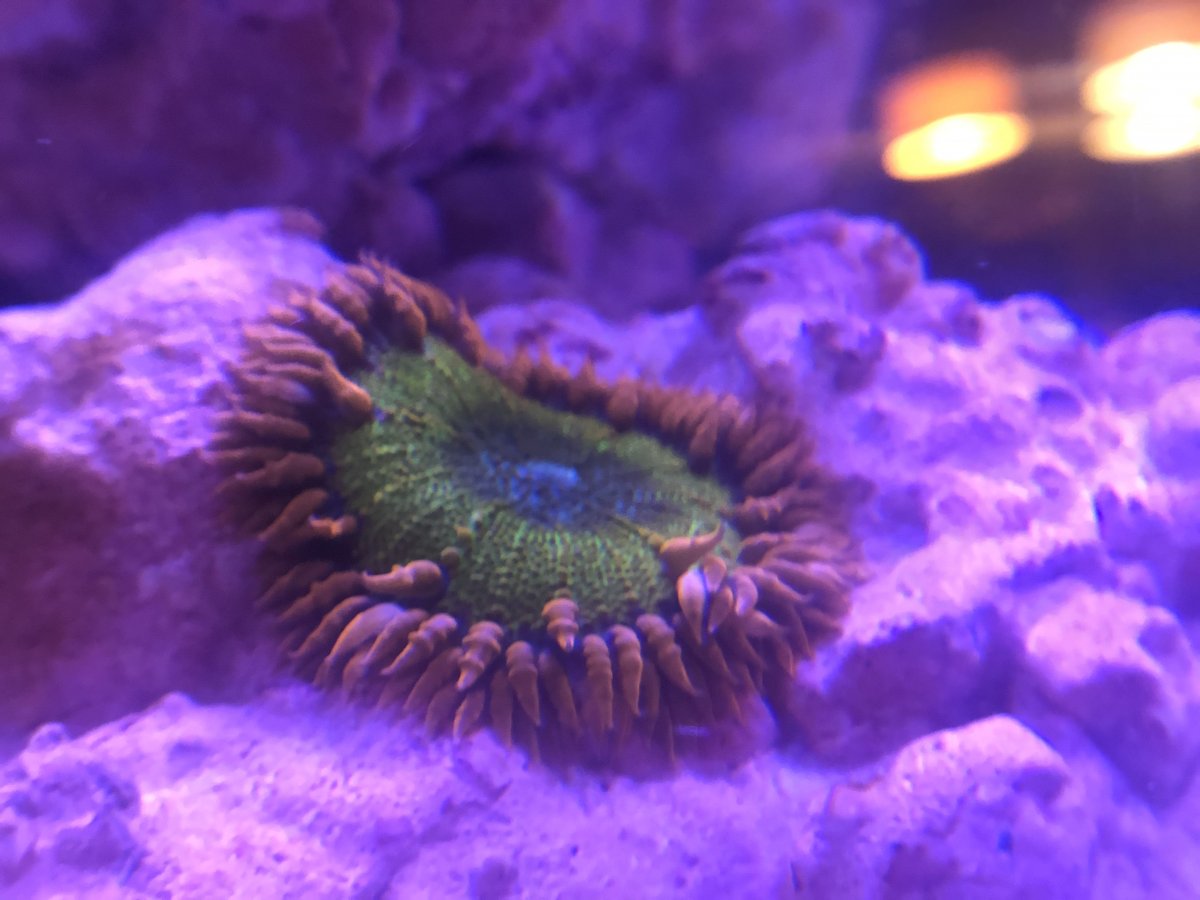 I'm also proud to say I got our skimmer up and running - and it's broken in and working well! Never used a skimmer before so it was fun to figure it out....and figure out the balance between it working efficiently and not having a billion microbubbles in the display.

Next weekend, if everything tests out well, I'll be moving a blue candy cane colony from the nano to the 65....and maybe figure out how to get a rock new or two off the live rock. Or not. Might just sell that rock as a rock flower garden to someone in the future.

Having so much darn fun with this adventure!!
OP

Been a while but I’m finally starting to see everything really settle in. Brings a lot of joy, after over a year from empty tank to now, to see healthy, happy, growing corals.

Some macro shots at ramp down last night: 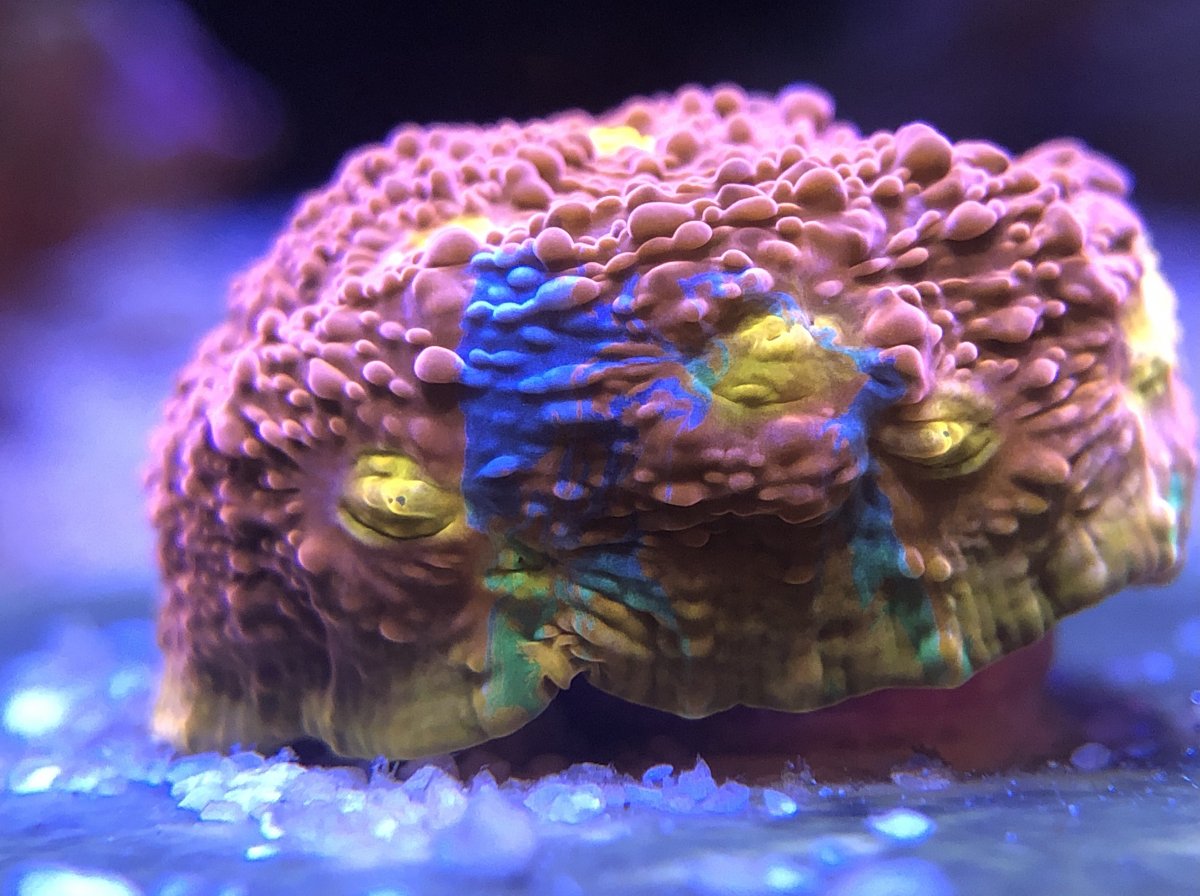 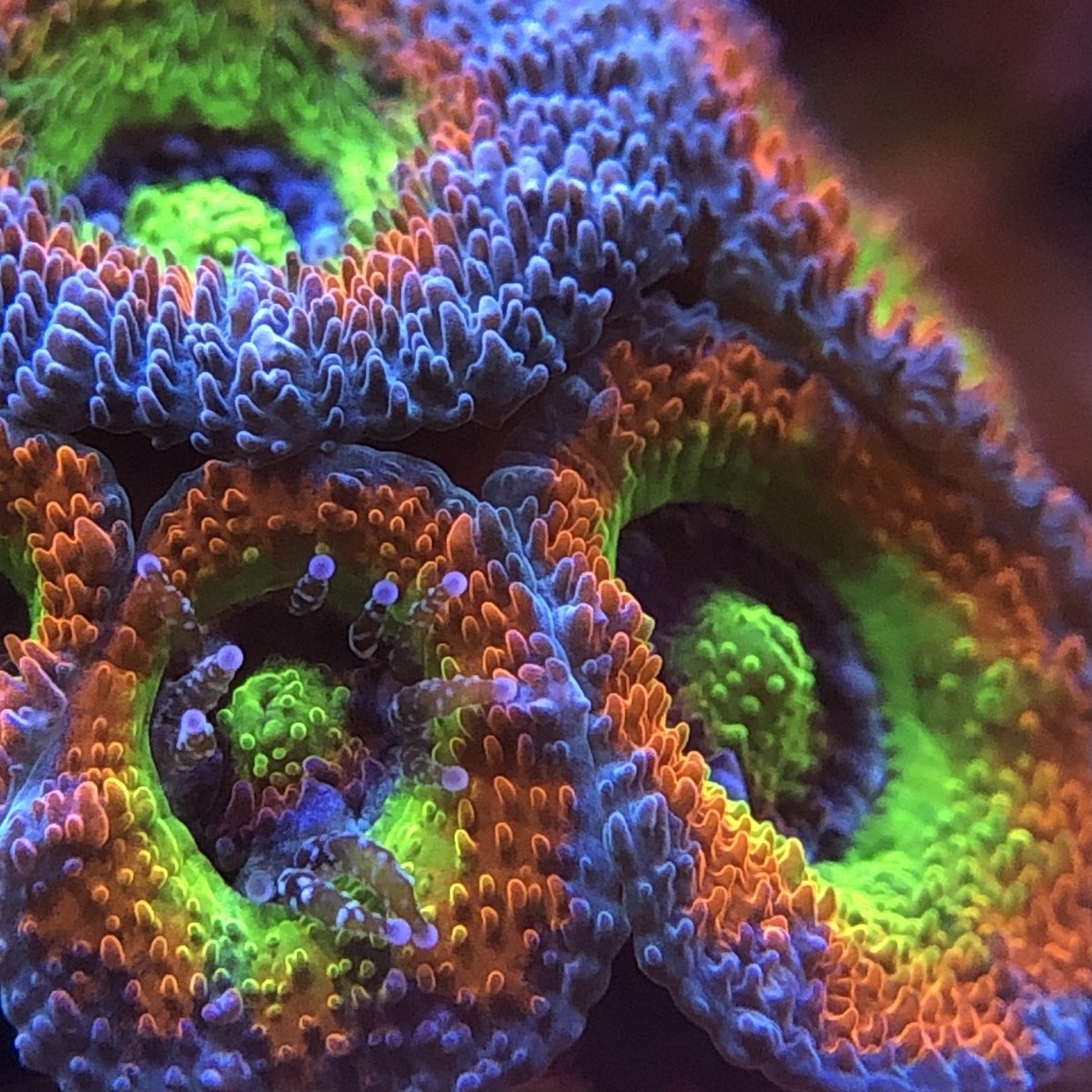 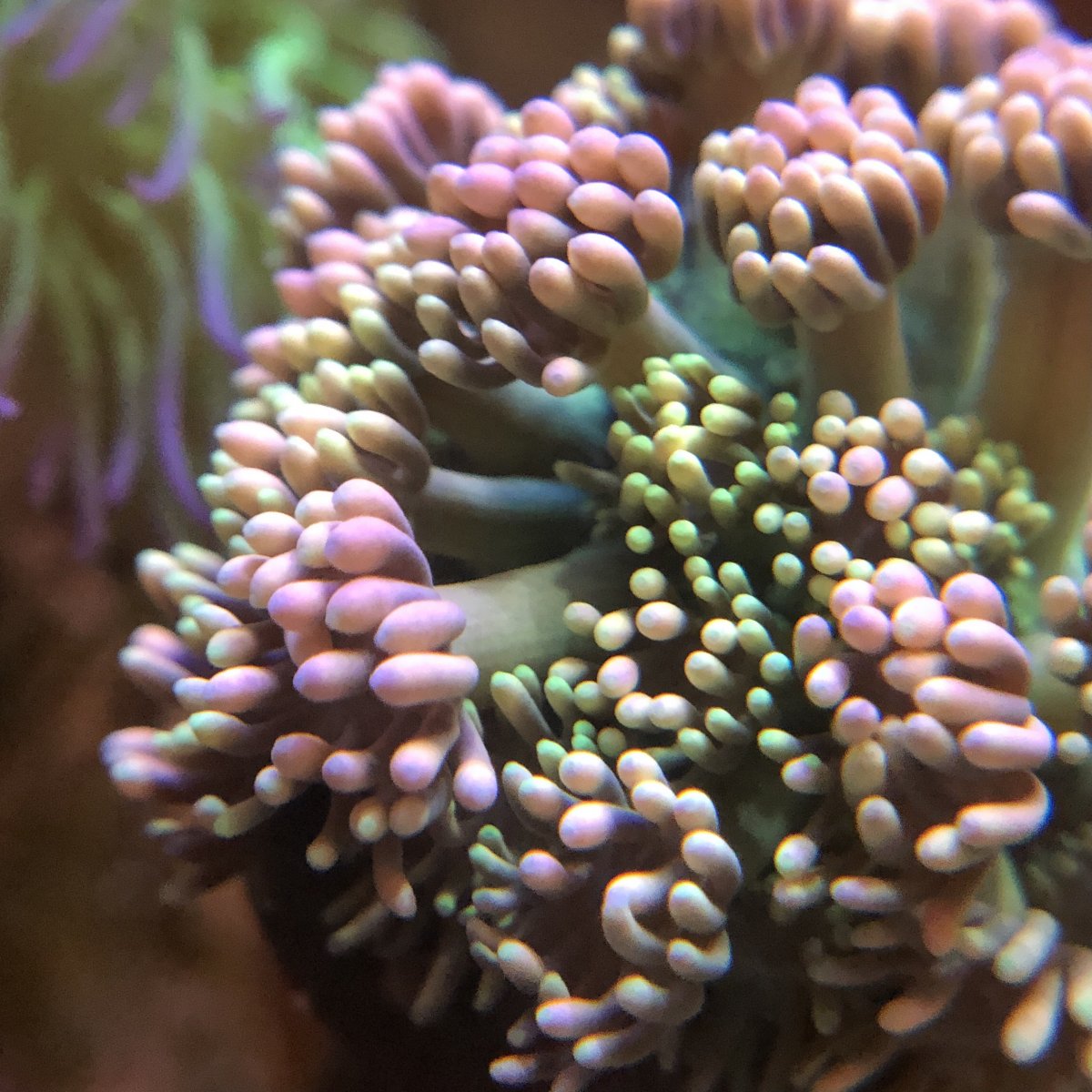 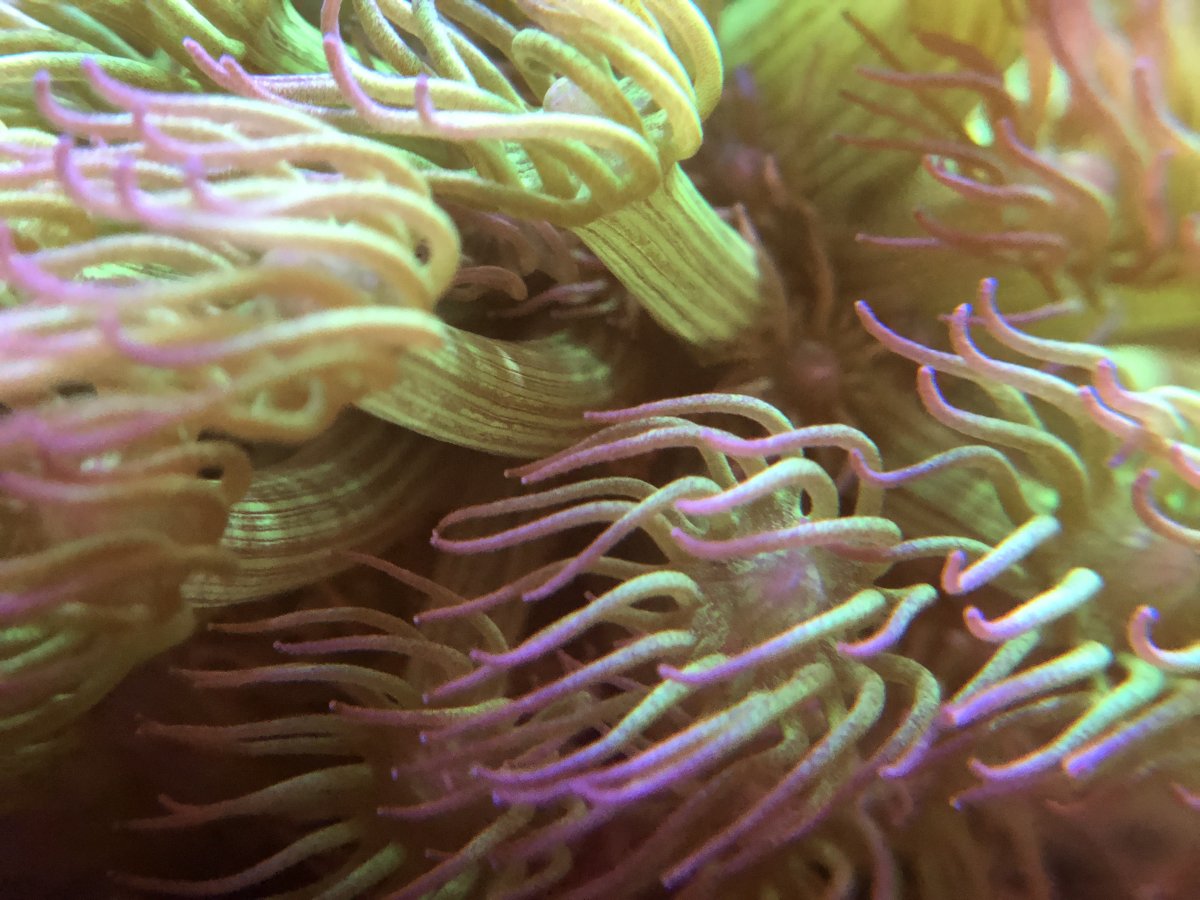 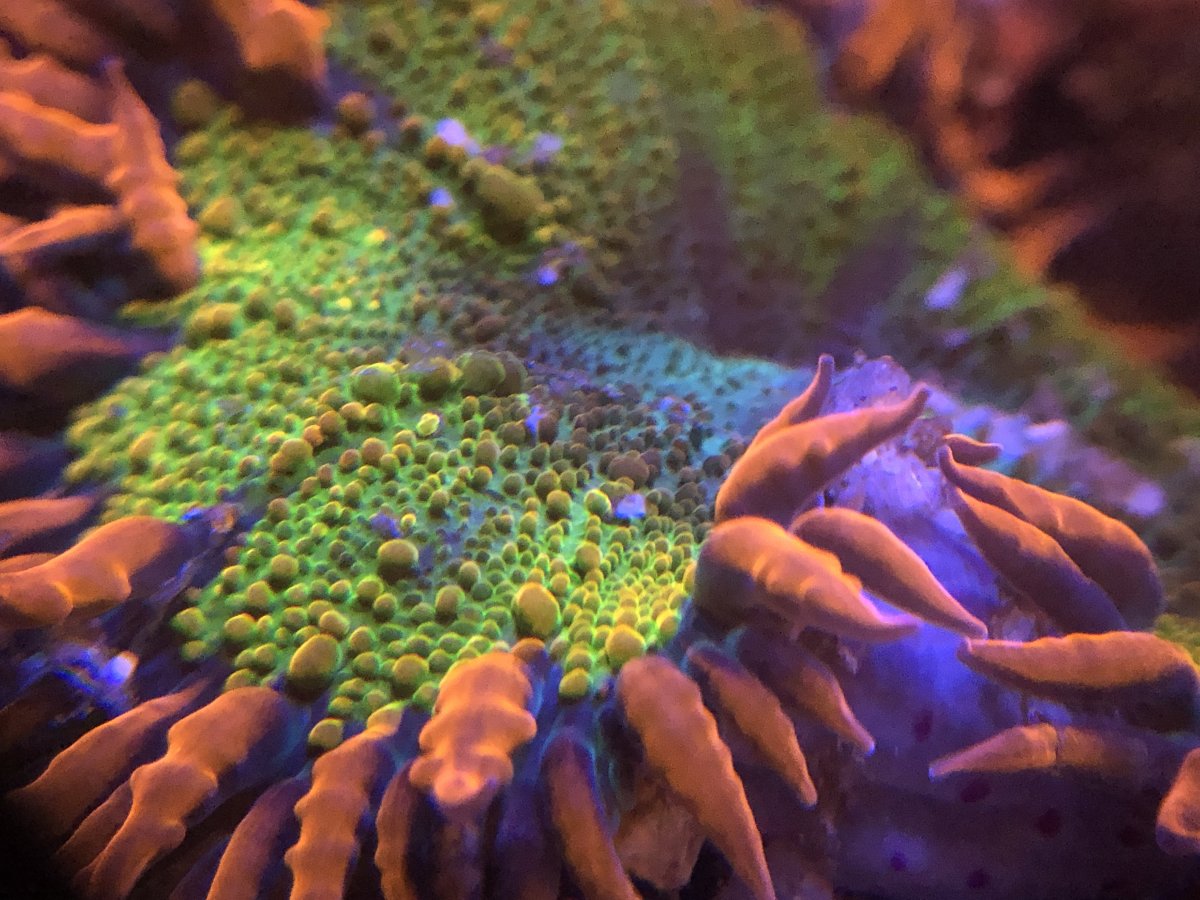 What JBJ skimmer are you using? I have yet to come across a JBJ skimmer rated for a 65g. Seems like everyone uses the tunze 9004 but with very mixed reviews.

CarleyFreeman said:
What JBJ skimmer are you using? I have yet to come across a JBJ skimmer rated for a 65g. Seems like everyone uses the tunze 9004 but with very mixed reviews.
Click to expand...

I was using the JBJ SK-45 which is rated for a 45 gallon (I think it was created for the JBJ 45 gallon AIO). It was less than cooperative for me for at least two reasons: it was extremely sensitive to water level changes (every time I'd do a weekly water change it would get upset), and I found it difficult to tune so I'd either have tons of microbubbles in my display or it would not skim well.

I ended up going skimmerless for a long time but as my bioload increased I needed something so I went with the Tunze 9004 and it's been great for me. Super easy setup, runs without troubles, not super sensitive to changes (I turn it off, do my water change every weekend, fire it back up and it works like a charm without issues).

It's a challenge for us with the AIO finding something that fits in a chamber and works well. The Tunze has been good enough for me given the limited options.

That said, my next tank will have a sump

Build Thread Downsizing from 250g to a 65g Reef