Only thing really to report is there's been some interesting coral warfare of late, and a minor war of my own with Bryopsis.

In the case of the former, a blue and red entrusting Monti decided to nuke and now start colonizing a birdsnest, which probably will pan out attractively long-term. Sad, though.

In the case of the latter, I've been escalating, and am now short of trying Fluc and at trying Vibrant. The Vibrant has inhibited and halted Bryopsis expansion after 3 weeks (as well as film algae, which is weird for me). Really don't want to go through flux route. Fortunately the growth has been kept minimal through a lot of diligent manual removal, but it's always an annoying algae; low nutrient be danged.

Tank looking good, I'm sure that monti/bird's-nest colonization will actually look amazing once it gets some ground.

Congrats on the baby! My wife’s birthday is tomorrow the 27th. Tank looks great.
OP

Not much to update, aquarium is doing great.

Does anyone in the DC area want some neon green nepthea? It's stunning and I have ... just so much.

Very nice! Almost tempted to let coraline start growing on my back glass! Things are looking lovely in there.
OP

Tank was feeling photogenic. Honestly I'm not sure I love the coralline on the back, but I like it better than black. You can see the hydno, leptastrea, and monti starting to encrust the back wall. Once they've taken off even more, I'll probably cut back a lot of the coralline in order to "hero" the back wall coral plan.

My favorite fish, the diamond goby, let me get a real good shot of him. Which he usually doesn't. Unfortunately it was against a side wall and some of the mentioned coralline wanted to play. The stuff is on every surface; it even grows in the sump underneath areas where the sand is removed and the bottom glass is exposed by the goby. 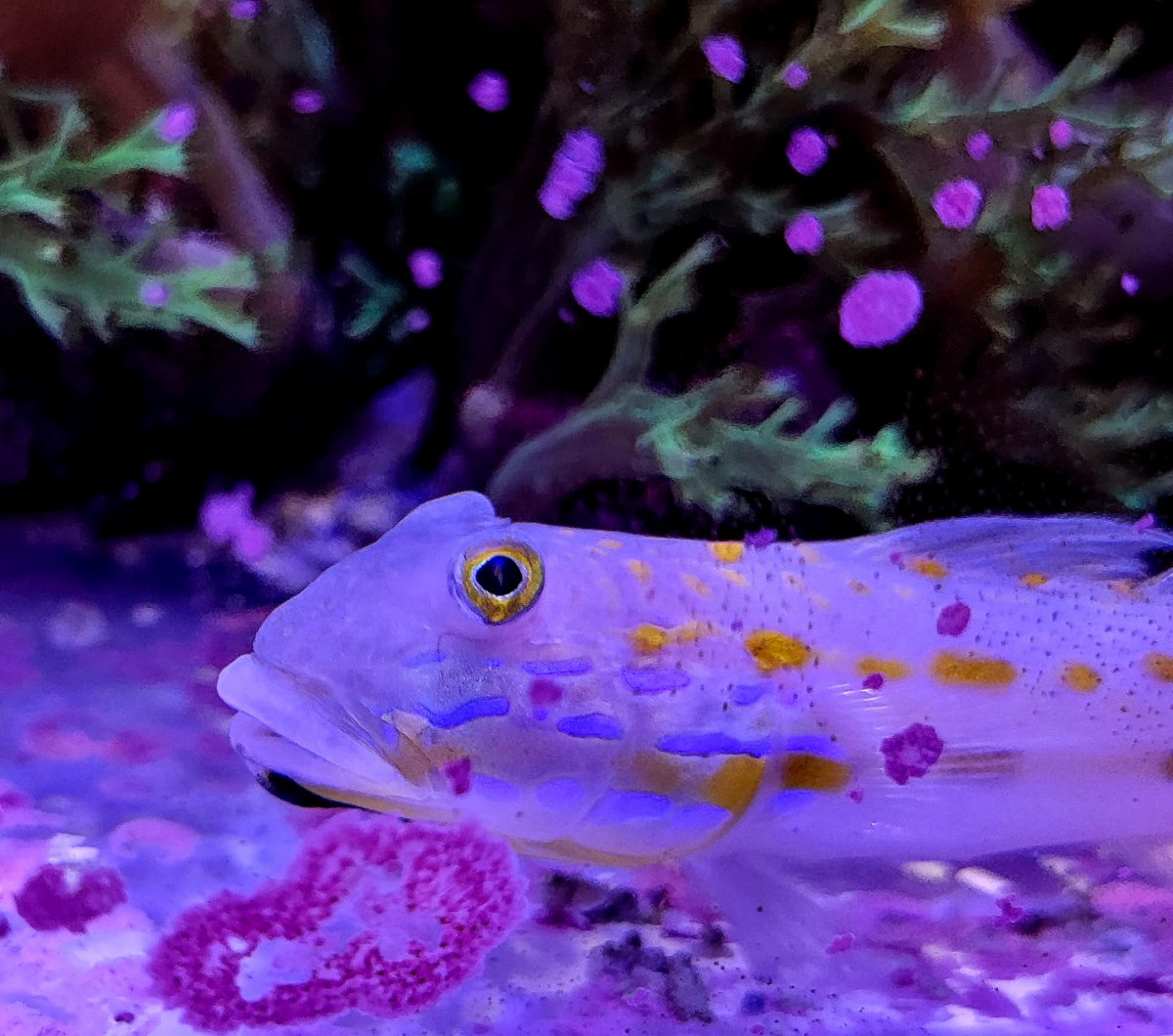 My newborn son's reaction to me musing about getting some more corals.

Also, it has to be said I absolutely swear by All for Reef at this point. I cannot imagine going to a triton or 2 part solution after this.
OP

Random vent: the boutique naming conventions for corals are absolutely ridiculous. I have a ton of different colonies that have grown from various frag sales on R2R, they're all great, some cost $5 and some cost $75, and I can't remember the names of basically any of them. Half aren't even remotely descriptive of how they actually look.

Tank is great, hope all are well with their own systems.

Of the 3 islands, this one is the most complete. Tank's having a pretty day. 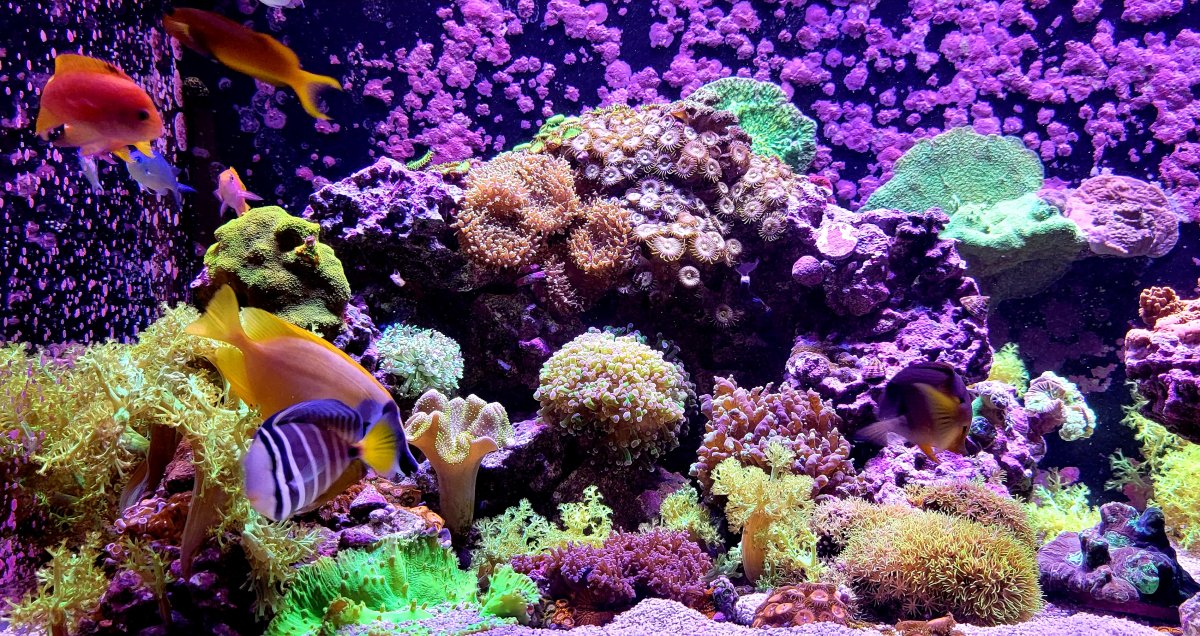 The neon green leptastrea growing on the back is bigger than my hand, and the hydnophora next to it is as big as my hand. I'm expecting by next year half the back wall will be encrusted.
OP

Plugging along. I don't really have much to say. But it feels wrong not to keep pics coming.

I AM curious about how to frag and sell neon green nepthea......

Fine! You inspired a very tired photo session during the last light of the tank tonight. Please forgive the skills as usual; I have a phone camera and a magnetic lens filter and that's basically it. But I was feeling it.

Massive Lepastrea colony. When dealing with bryopsis once, I accidentally tore a chunk of it off the wall. Ever curious, instead of throwing it away, I dropped it into a gap in a GSP colony. They seem to live with each other, both growing, but this Leptastrea is a dick. I caught a short video of the frag sweeping, and some photos of the mother colony along the back wall going night raid on some cherry Monti.

Another of the back wall experiments that continues to go really well is a hydnophora.

About a year ago, I snagged a ludicrously neon green nepthea frag from the lfs for fifty bucks. 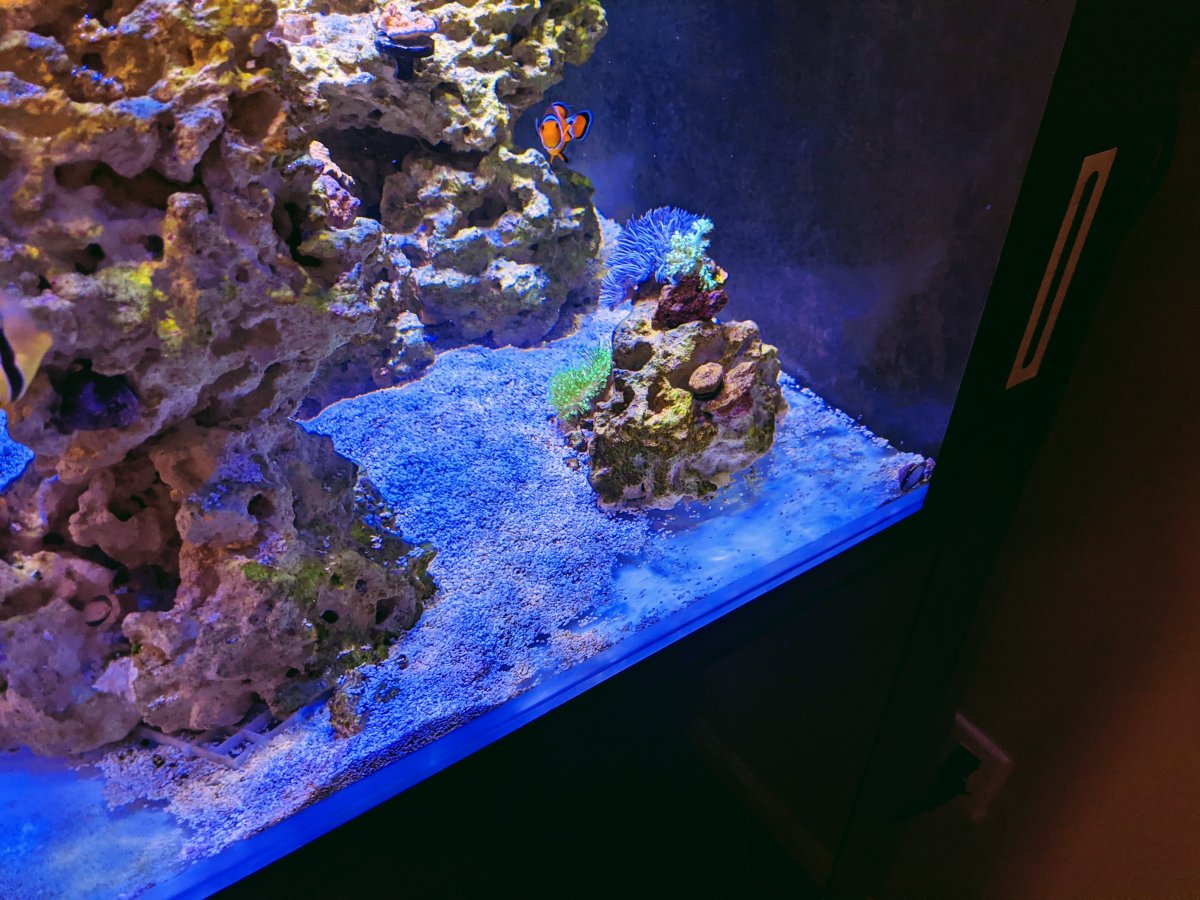 You can see it on top of the rock there. Well, it's a great thing I love it, because there's now these stunning forests of it. Anyone want some? 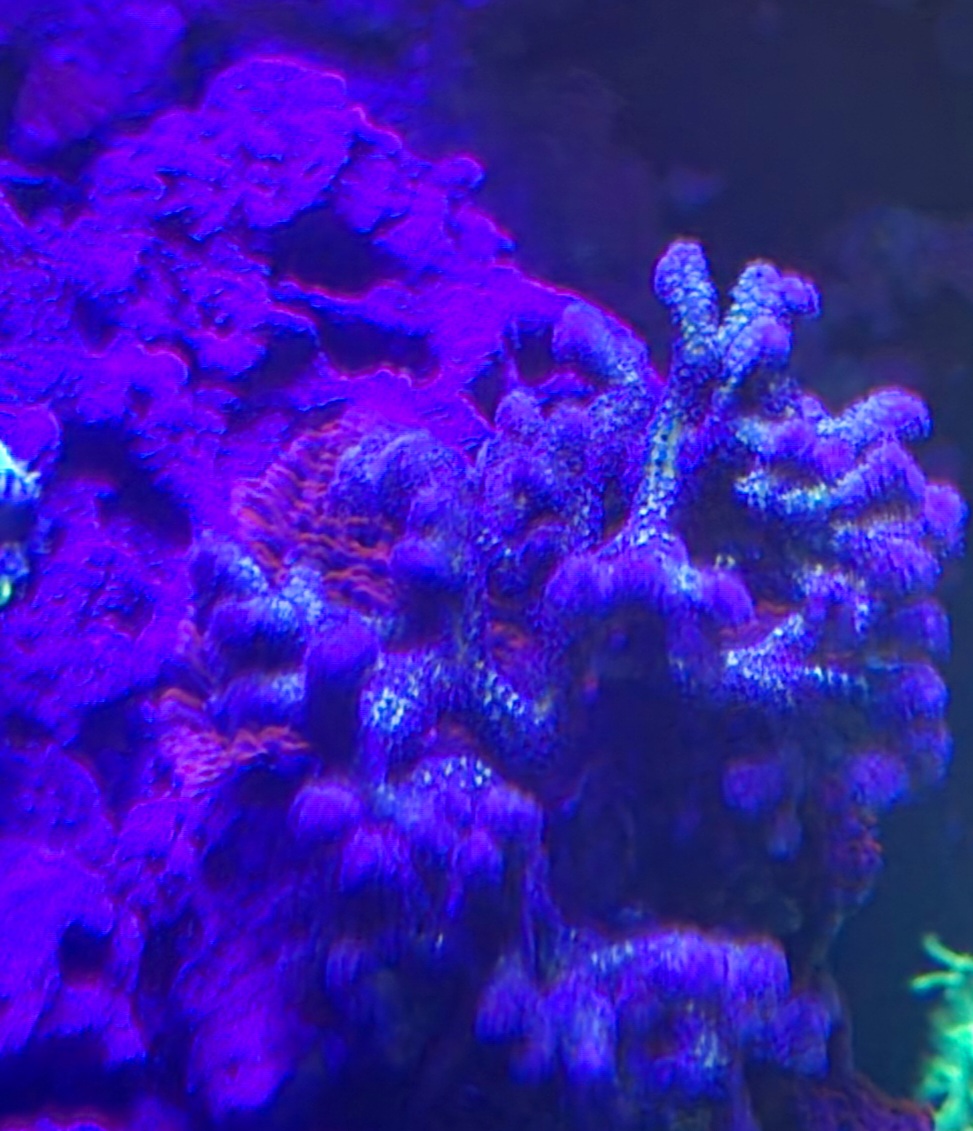 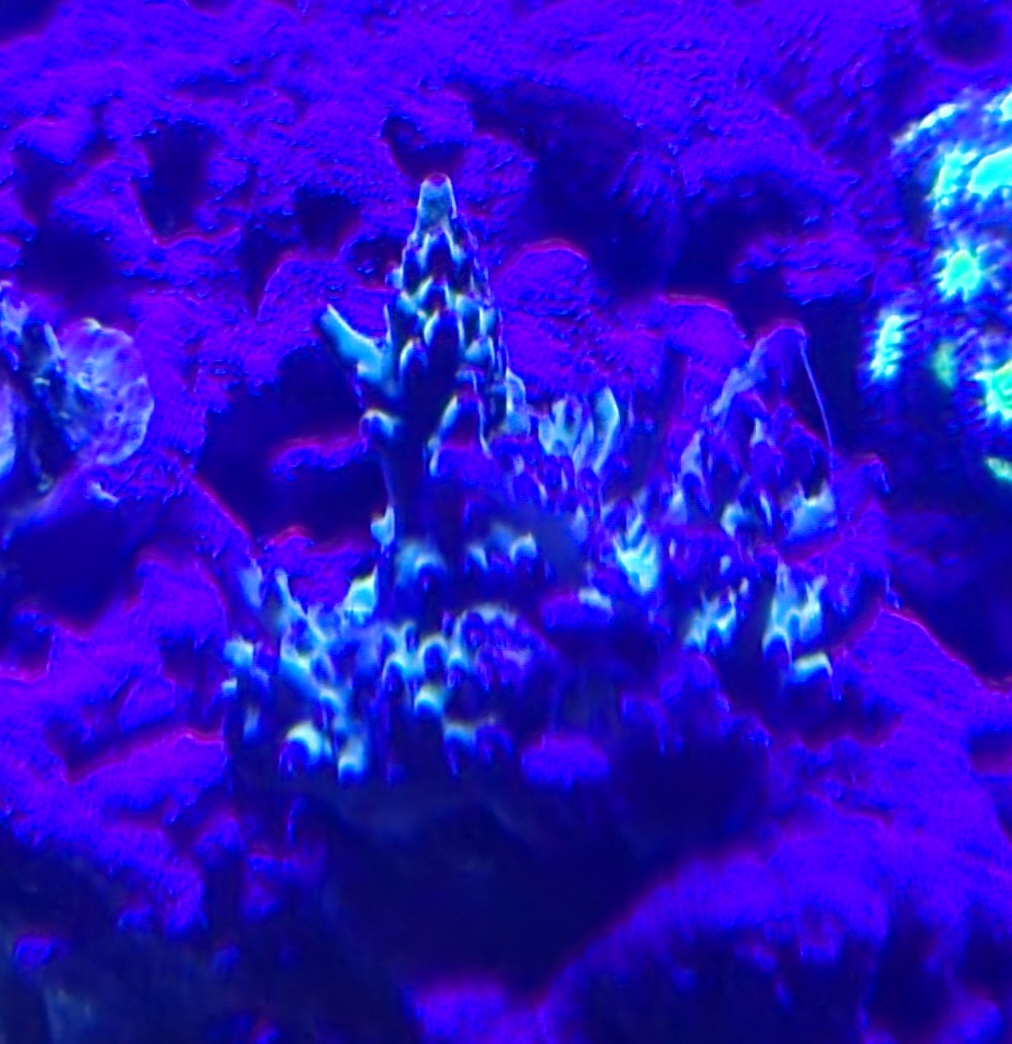 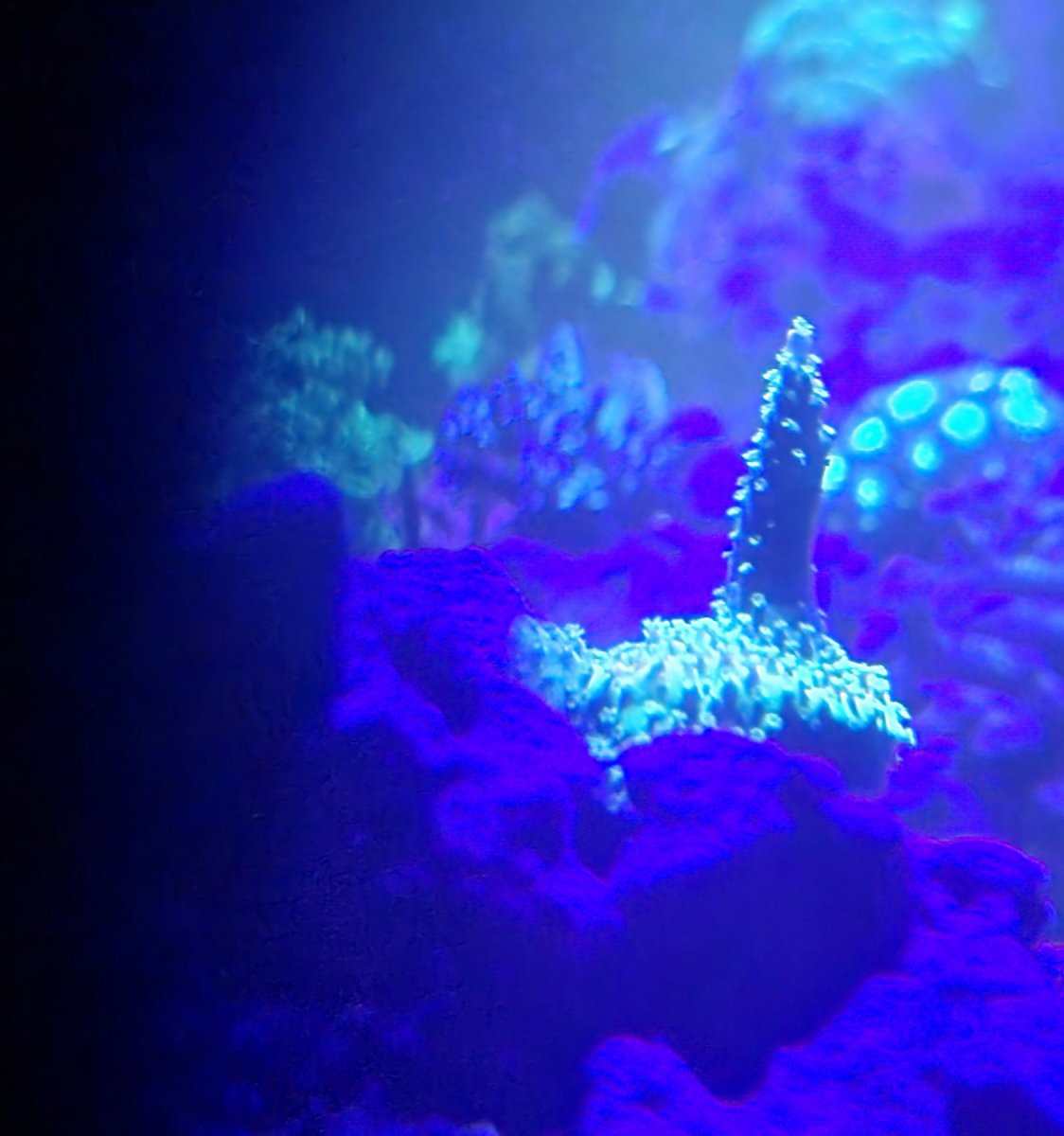 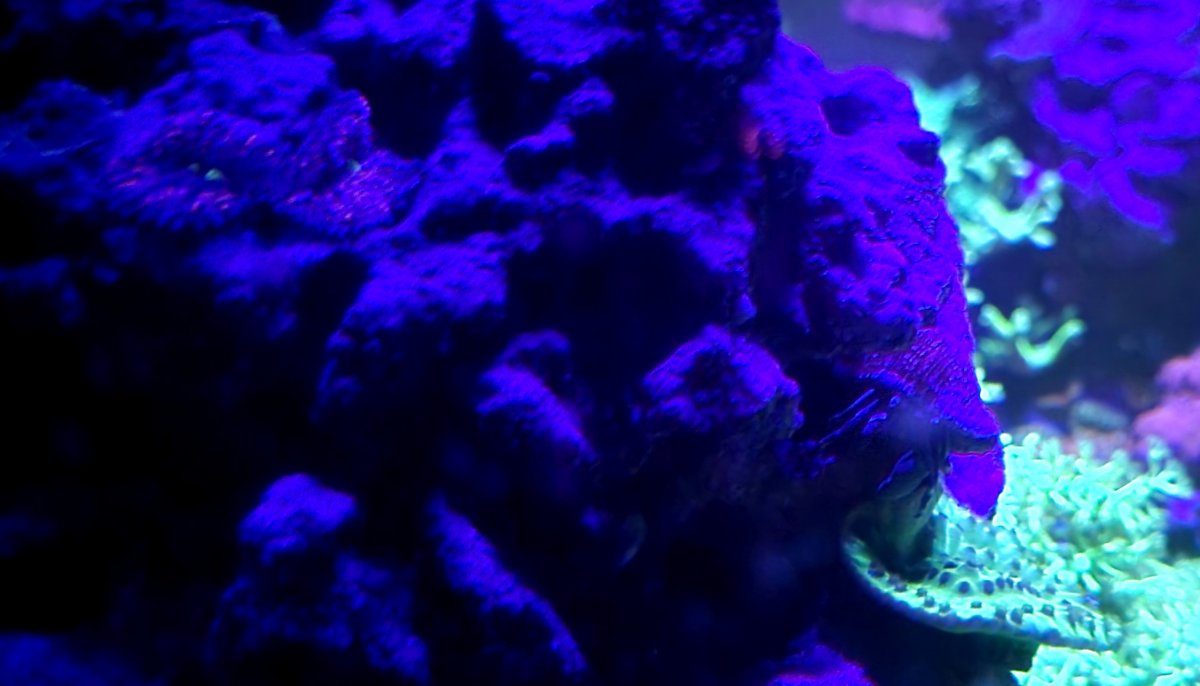 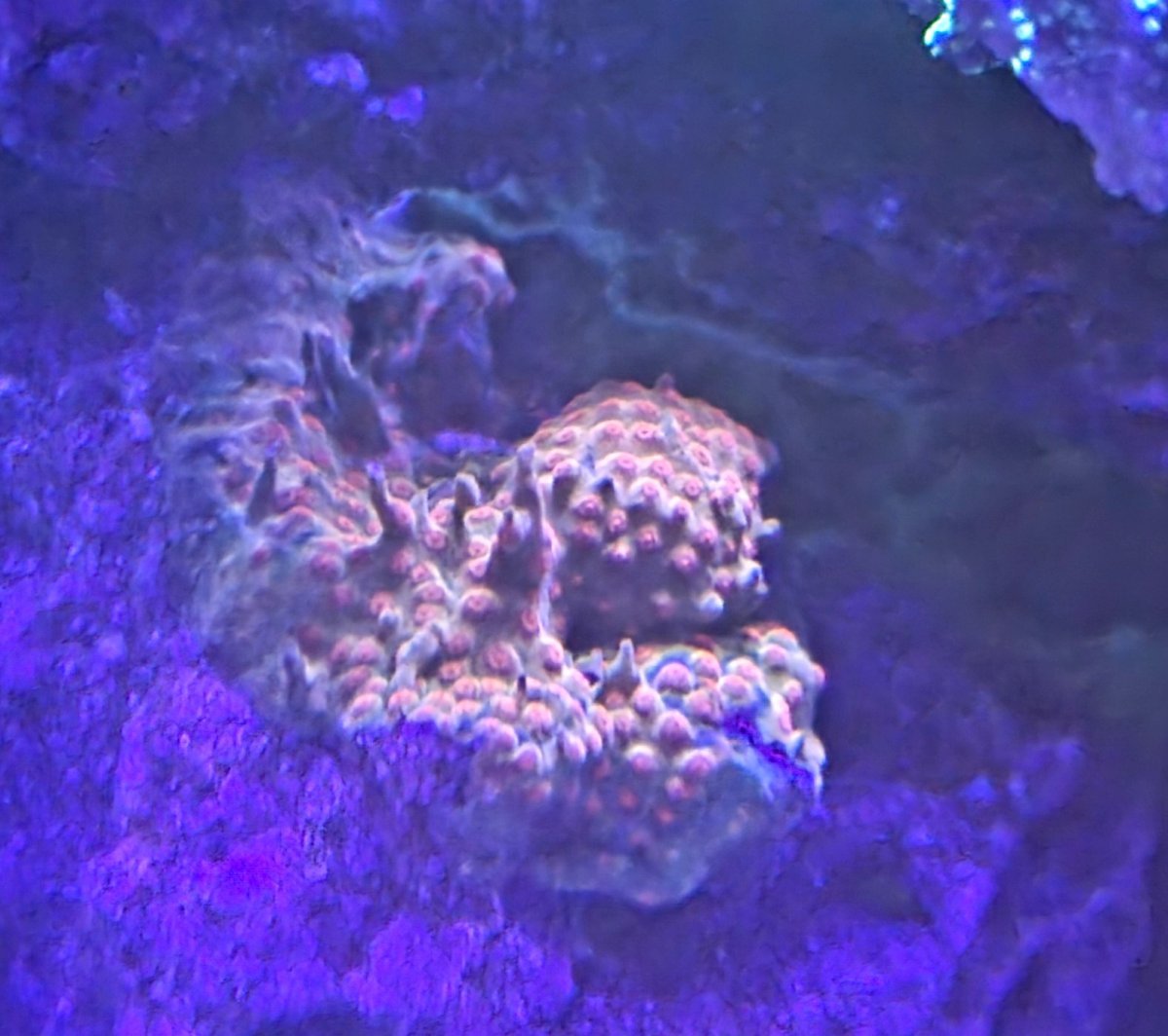 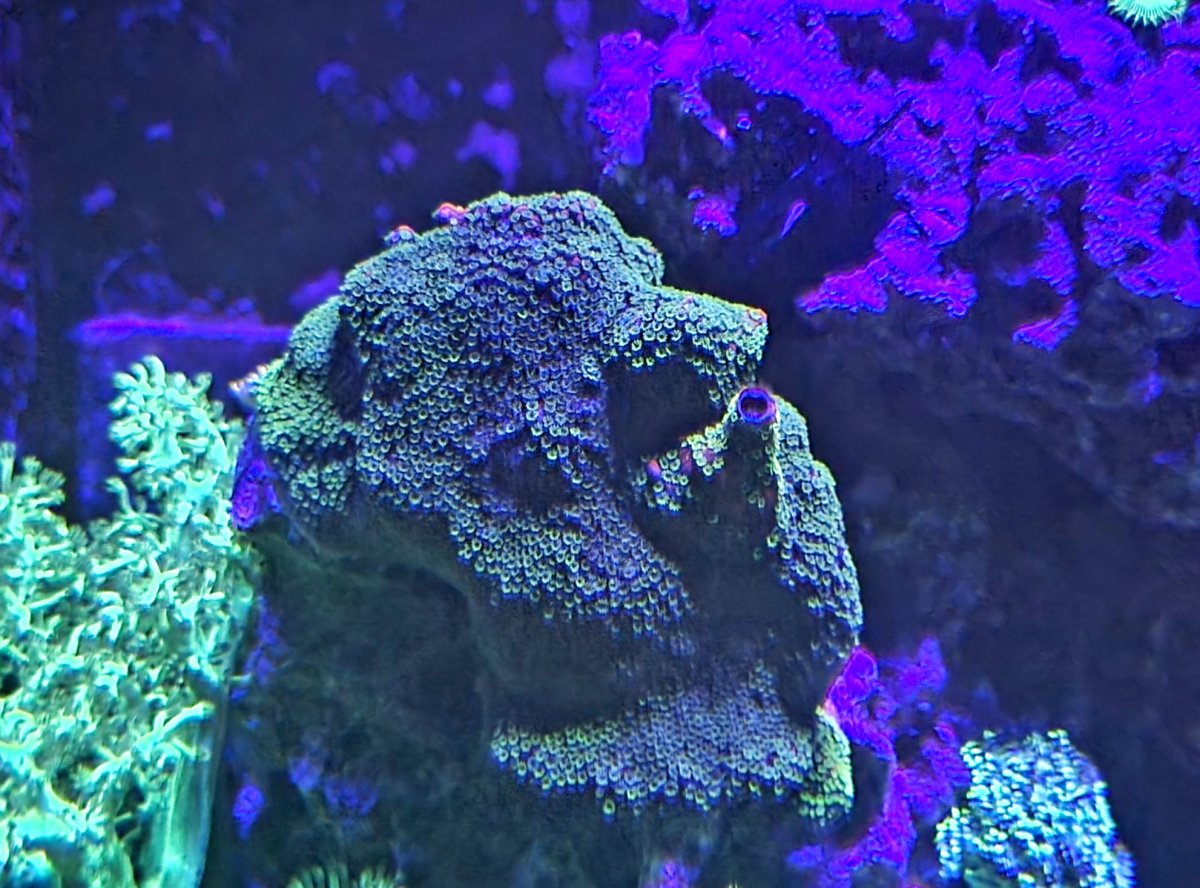 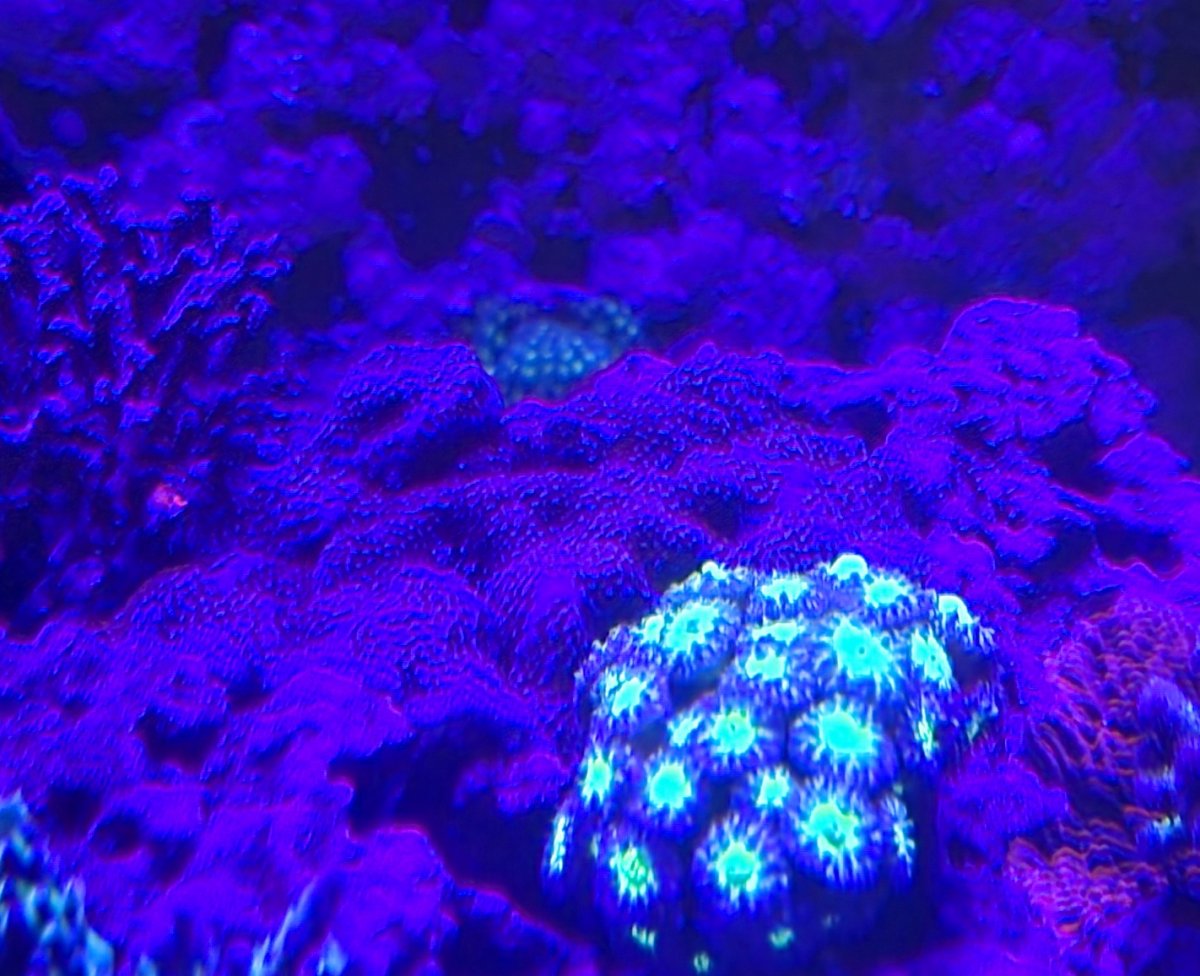 What a difference a year makes.
Back then: 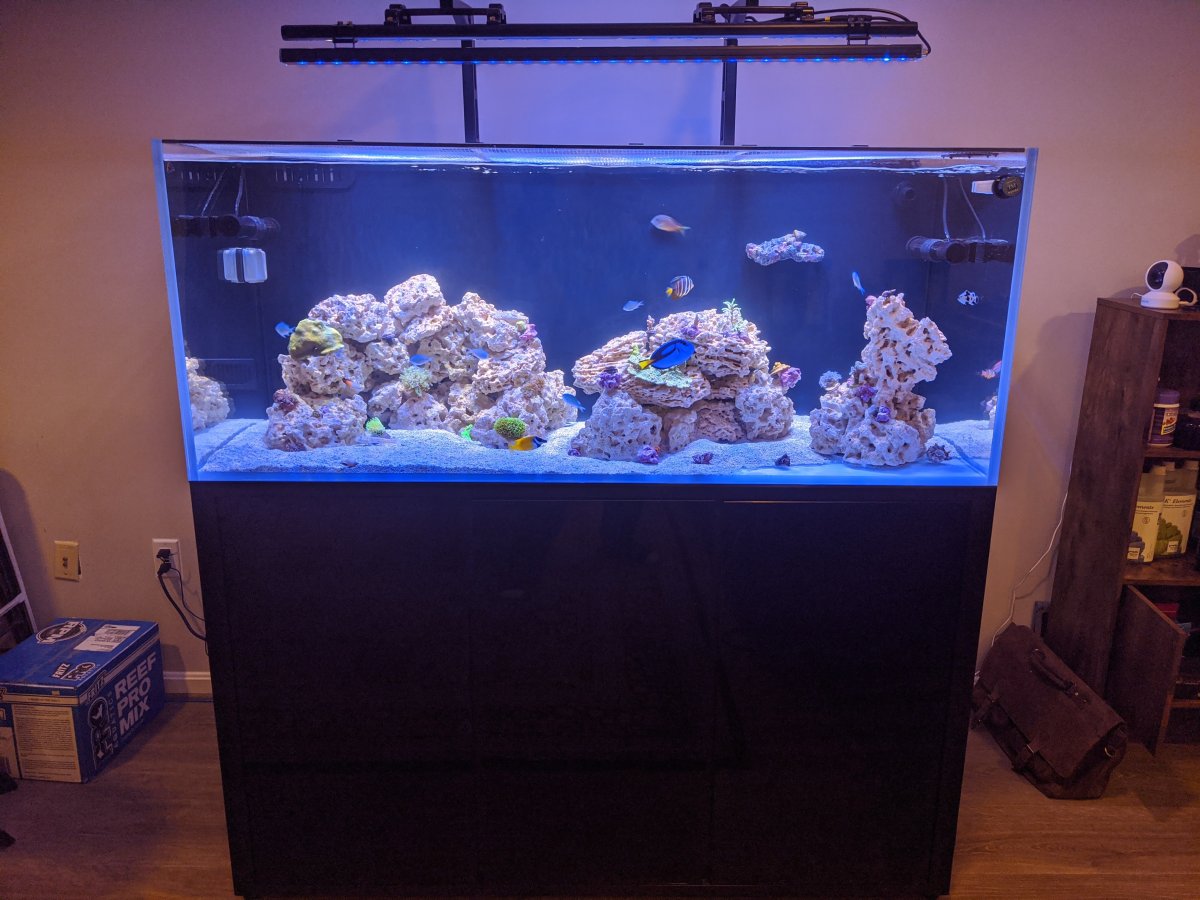 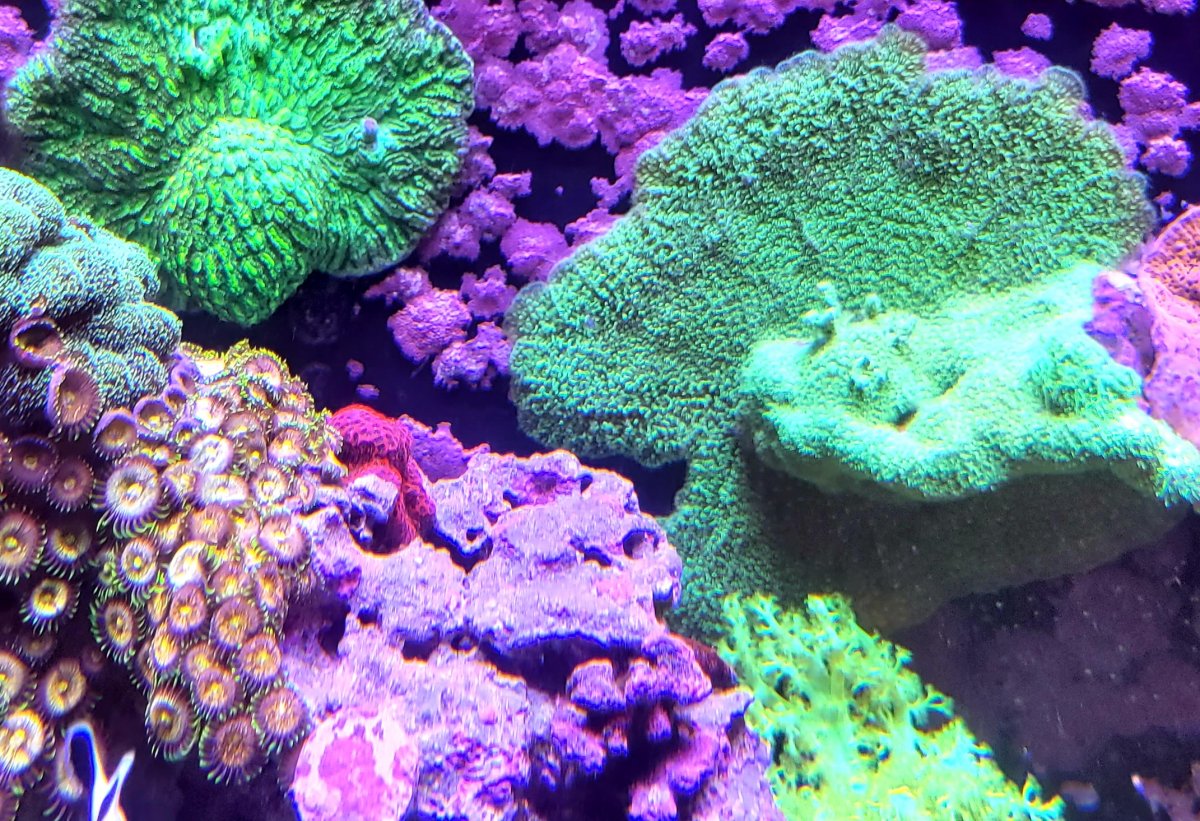 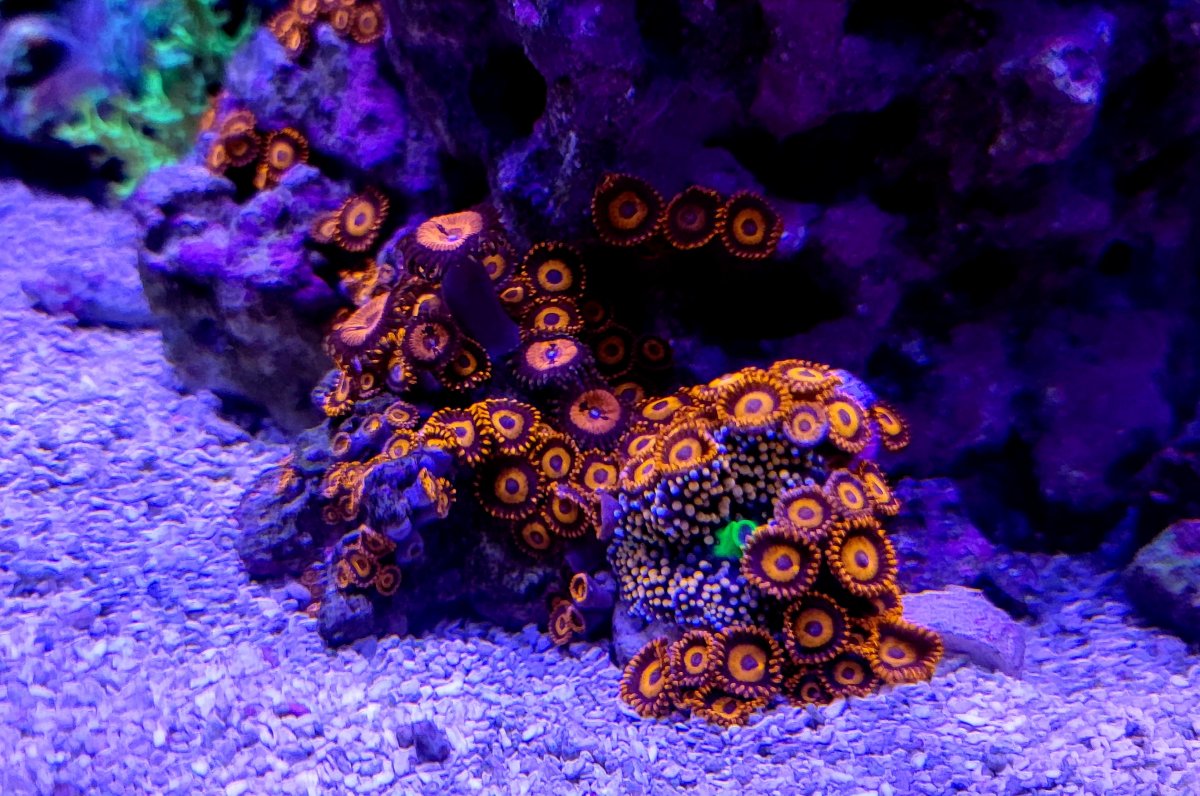 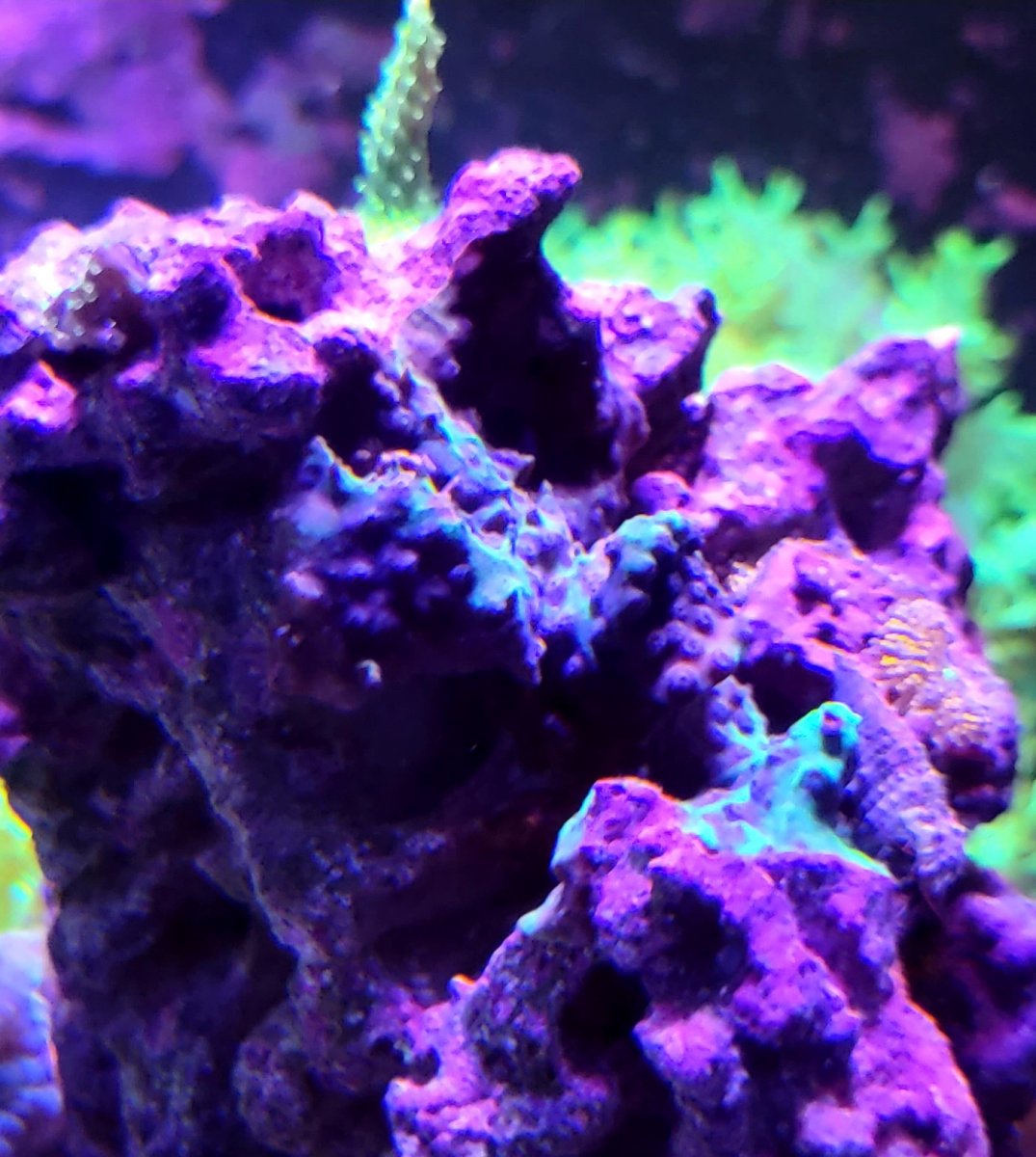 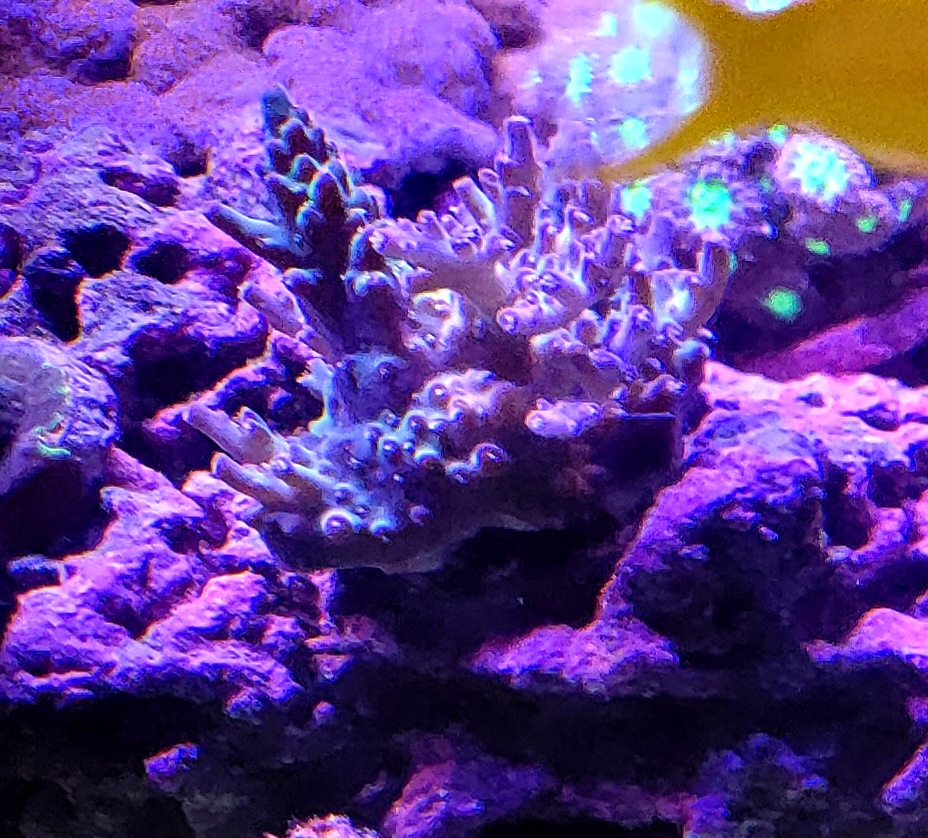 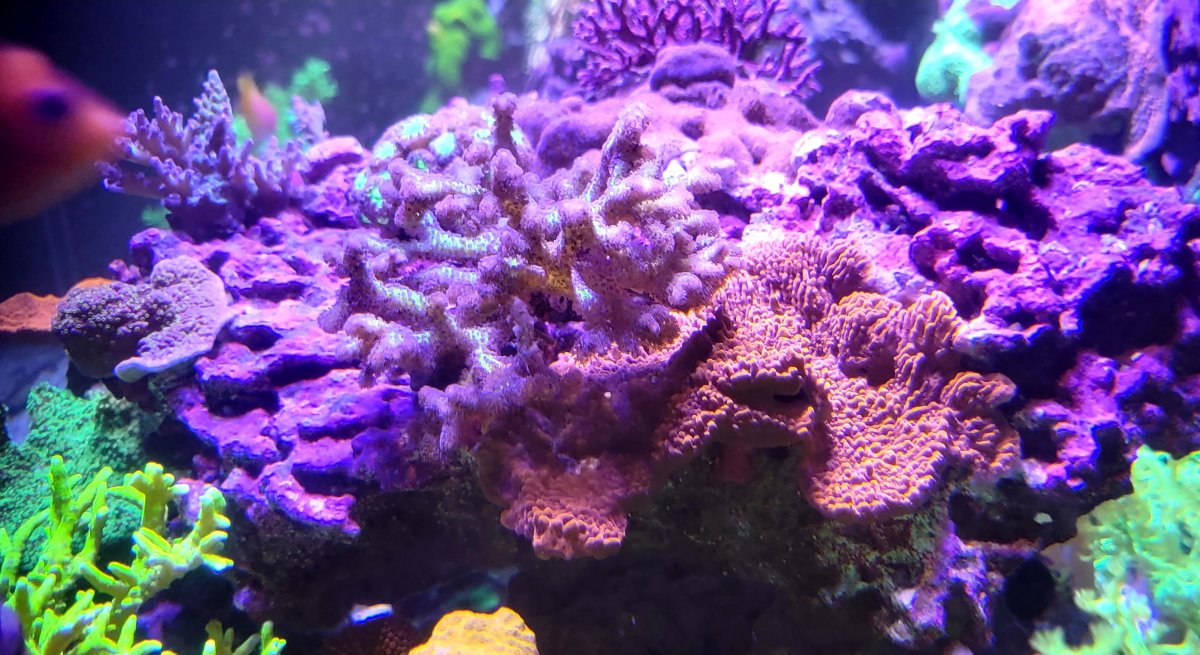 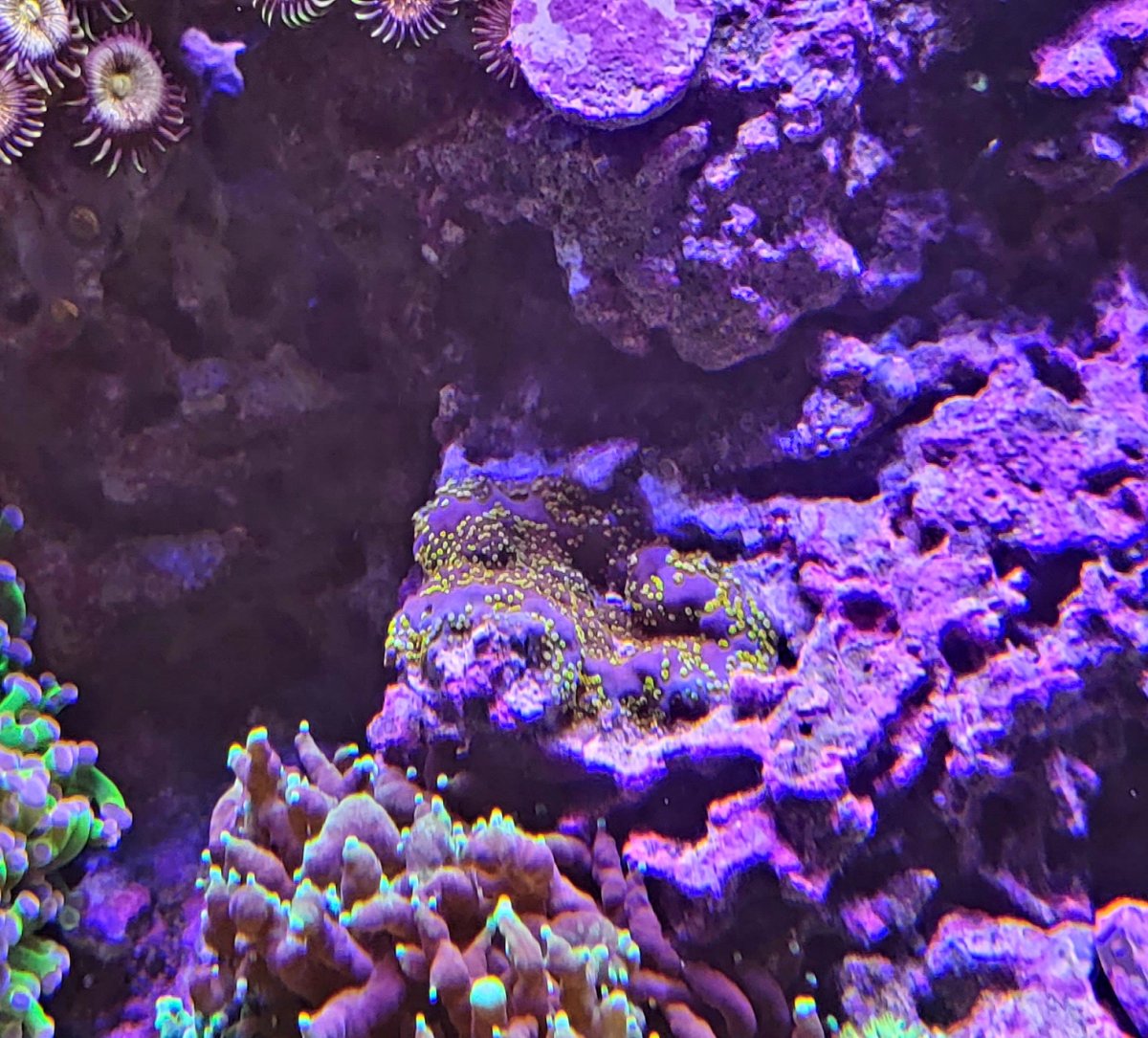 What are folks' perspective on amphipods in the system? I seeded mine pretty heavily at the start and they are definitely all gone, and have been for a while. The population disappeared for no reason I can discern. This tells me either they didn't have a place longterm in the ecosystem for whatever low level predator reason, or there's something inimical in the system to them. But I love the little buggers, enjoy their ability to delve mulm out of unseen nooks alongside the heft bristle population, and kinda wanna reseed.