OK - So I've been on Reef2Reef for several years now and I've posted and watched multiple build threads but never really started my own. I've been meaning to do it for quite a while, but never got around to it.

So finally here it goes.

I dipped my fingers into the reefing world about 3 years ago. I bought a used 38 gallon bowfront and used hang on back equipment. This was a test system since I had tried my hands at Cichlids and eventually lost interest and started to slack off on the husbandry of the tank. After a severe algae outbreak I took the system down and and sold the tank and fish. So my wife was a little skeptical when I said I wanted another tank, but this time I wanted salt water. She knew it was more work and more expensive, but we finally agreed that if I could keep a smaller tank going for a while than I could eventually upgrade to a larger system.

So after reading multiple threads with HOB systems and with guidance from one of my LFS I bought some lights and a HOB filter and a heater. Eventually I also bought a used HOB Aquamora protein skimmer. Over the course of those first 2 1/2 years I learned a lot about what I didn't like about the HOB systems and what I wanted to do when I started a tank with a sump. 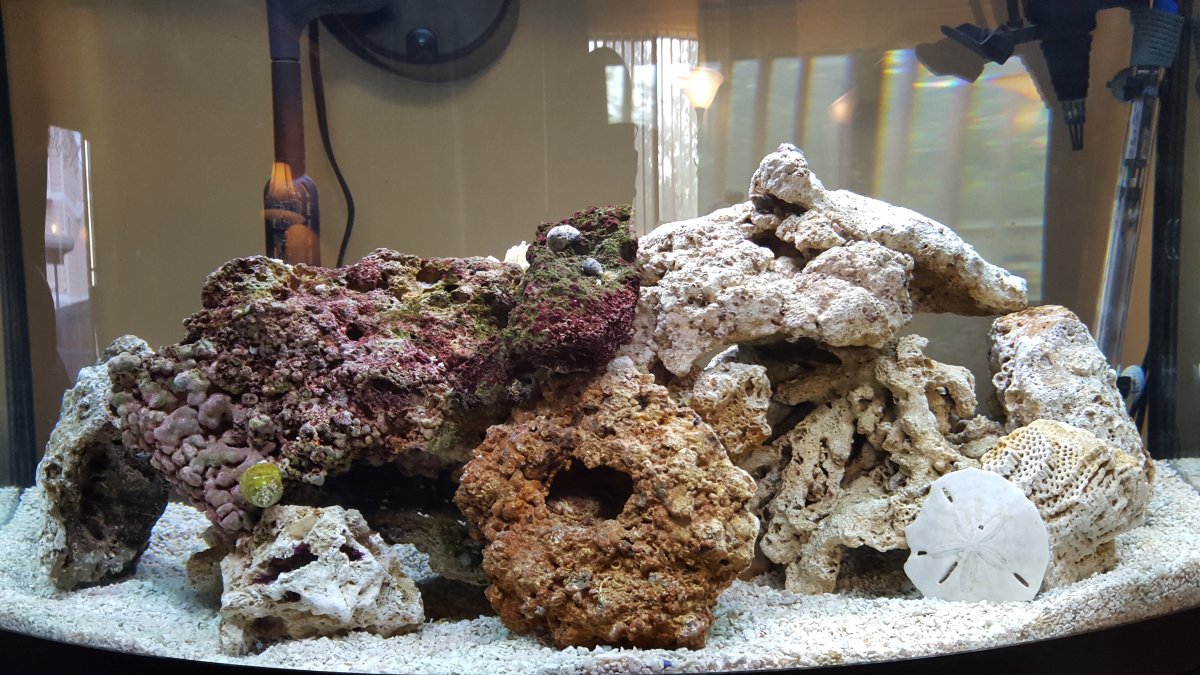 I had planned on buying a Red Sea Reefer 350 or 425 but my wife found an ad on Craigslist for Red Sea Max E-260 with optional under cabinet sump fully setup and looking to sell it at a reasonable cost. A little smaller than what I really wanted, but still a huge improvement over what I was currently working with so I jumped. I brought my new to me MaxE-260 and set it up on the other side of the living room. I wanted to get this one setup and make sure that everything was stable before I combined both systems. After waiting for a week while constantly watching an ammonia badge for a potential cycle from taking down and moving the RS Max E-260 I was confident that everything was safe.

In the 38 gallon bowfront, I had been battling red and green cyano so I was hesitant to move any of the live rock from that tank. (above pic) A few months previously at Reefstock here in Denver, I purchased a couple of pieces of AquaRoche ceramic rock for aquascaping my what was then planned to be my new tank. So I combined the AquaRoche rocks and the existing live rock from Max E-260 to make some structures for the corals and the fish. I also added a brick of MarinePure to the sump. The aquascaping isn't exactly what I was looking for but when trying to combine the two tanks I had to make some sacrifices to get everything in this was the best I could come up with. As things are maturing I might make some adjustments. 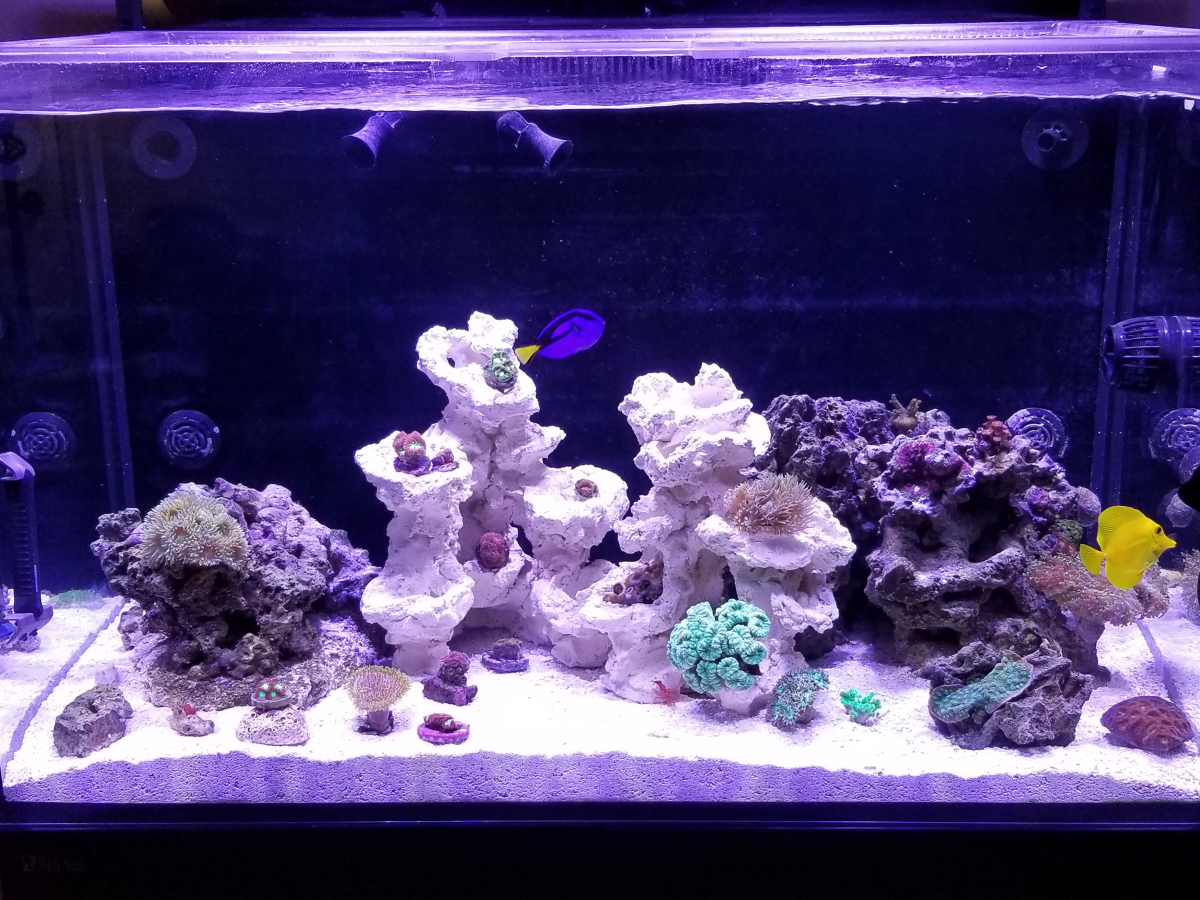 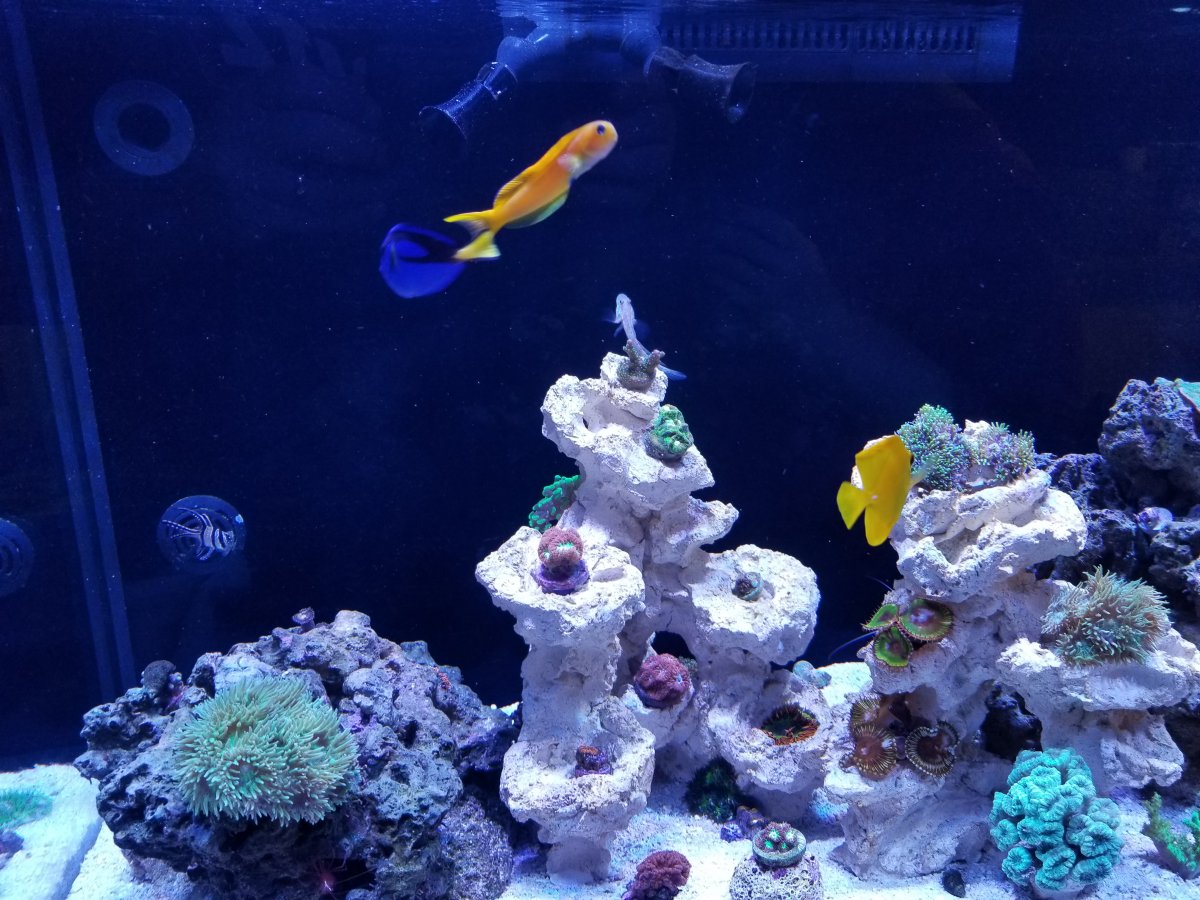 Neptune APEX 2016 - I actually have two of these - one I got for Christmas this past year and the other came with the Max E-260. I'm about to use the second EB832 for the DOS below so I think I'll just put the 2nd control unit aside for a back-up.
LDK - Leak Detection Kit
WXM - to control MP10
DOS - haven't set this up yet. I've been busy with work lately to set this up. I test calcium and alkalinity several times a week and then manually dose Red Sea Alk & Calcium.

Fish - I know that this tank is a little heavily stocked but I've been able to keep nutrients at the proper levels with water changes and the skimmer. But the tank came with fish and I had fish. I was ready to rehome some fish if I ran into problems with aggression or other problems with the tank. In the future I do plan on upgrading again to a larger tank or I'll rehome them to the LFS if anything gets too big for this tank.


Corals
My old tank only had zoas, softies, and LPS corals. The Max E-260 had a few SPS that seem to be doing ok so I'm excited to start getting into some SPS for the true mixed reef tank. Combining tanks led to some duplication of corals as well as the inverts above.

Several types of zoas - I've forgotten the names of most of them.
Two duncans
large candy cane colony - this grew really well in my old tank
frogspawn
hammer
several blastos
several acans
we moved five flower anemones but only two are currently out. Three of them moved and were never seen again.
a couple of favias
toadstool
elegance coral
a couple galaxea corals
carpet anemone - this came with the tank and I'm not sure about this one. It is kind of cool looking, but I've also read horror stories about them eating fish and also the punch they can pack when you accidentally touch them.


I've tried to clean up the wiring underneath the sump but there is only so much room under there and it just isn't pretty. Without a dedicated cabinet beside the tank, it is awfully hard to get everything looking super tidy. I've used zip ties and tried to hang them from the top of the cabinet but in my mind it still looks like a jumble of cords. So, I'll spare you the pic of sump area.

I'll try to keep this thread updated with pics and equipment changes. I'd like to get my hands on a Neptune Trident. I know that these unicorns do actually exist now, but I still haven't seen one.

Nice upgrade and it looks great!

A few quick shots from today. Everything has been looking really good in the tank lately. 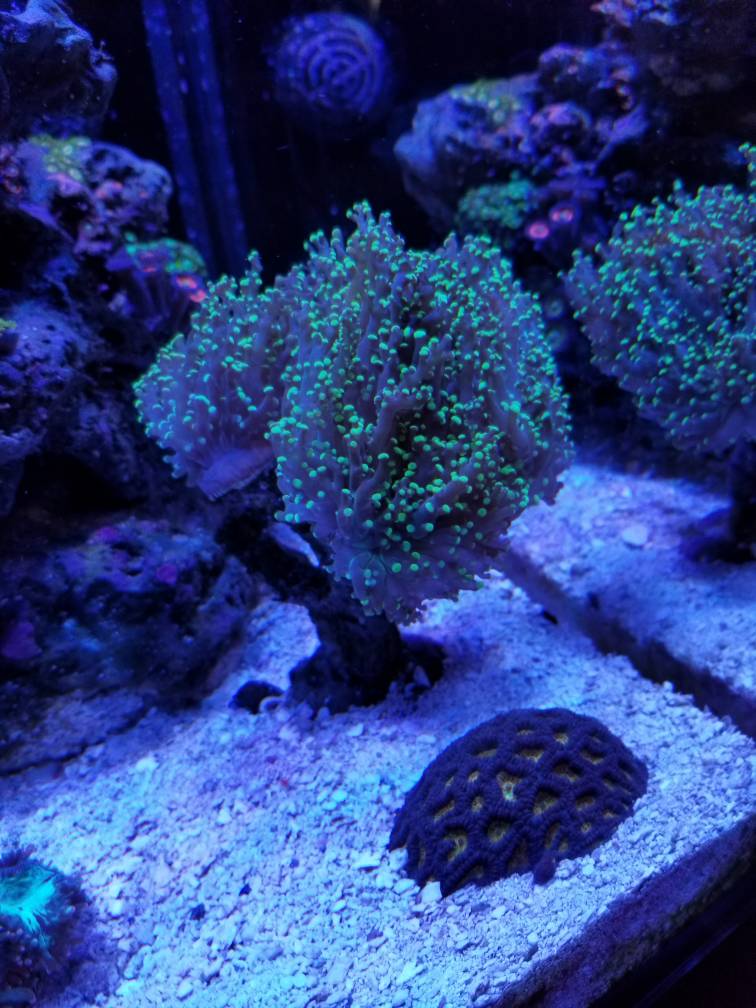 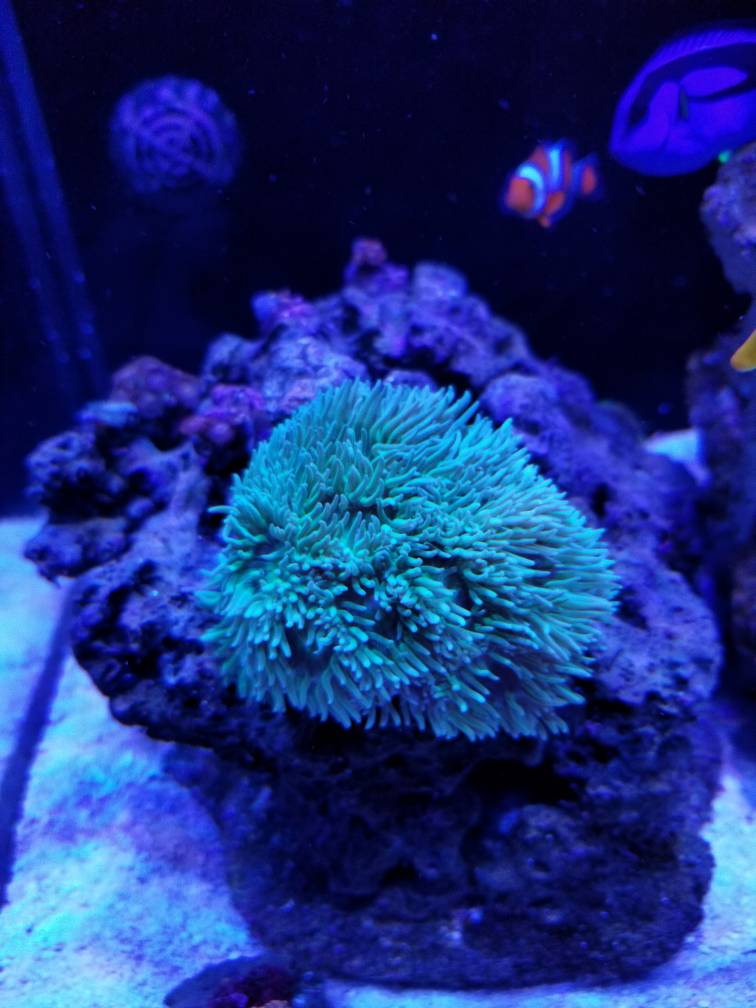 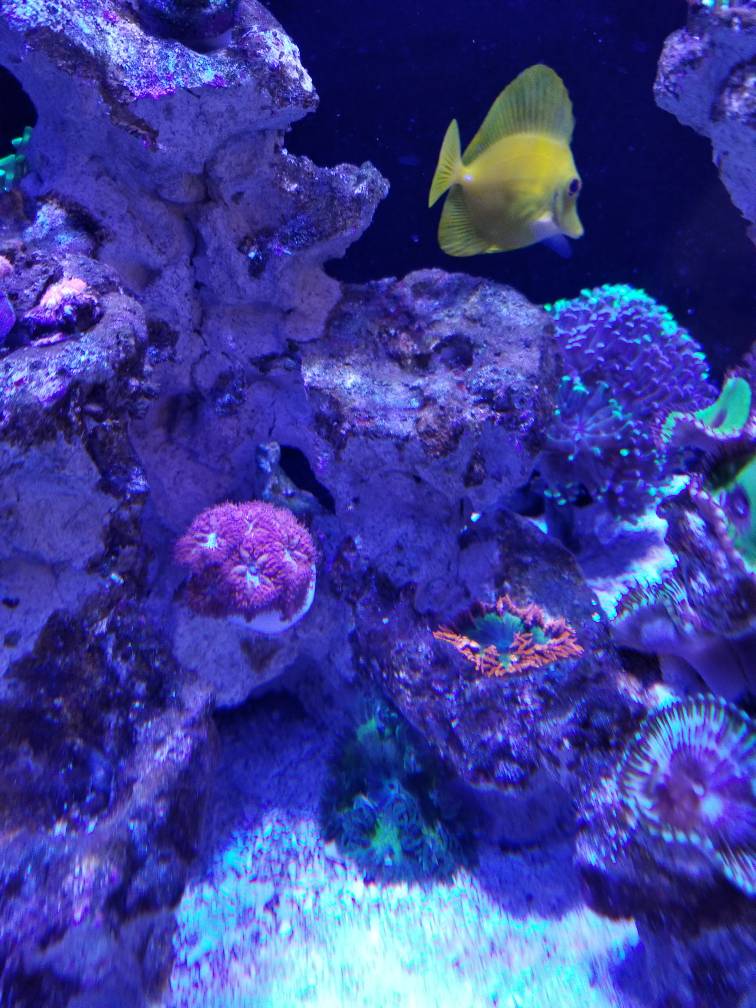 Sad day - came home to find one of my favorite fish, the diamond goby died today. Everything else looks good and the parameters are spot on.

I haven't updated my thread much lately. Been busy with work and selling/buying a new home. The tank got a little neglected during the past 6 months. It is looking much better now.

Yesterday I added a new disc coral and my newest aquarium toy - Neptune Trident. I don't always have time to test so it is great to have something to do some of it for me. 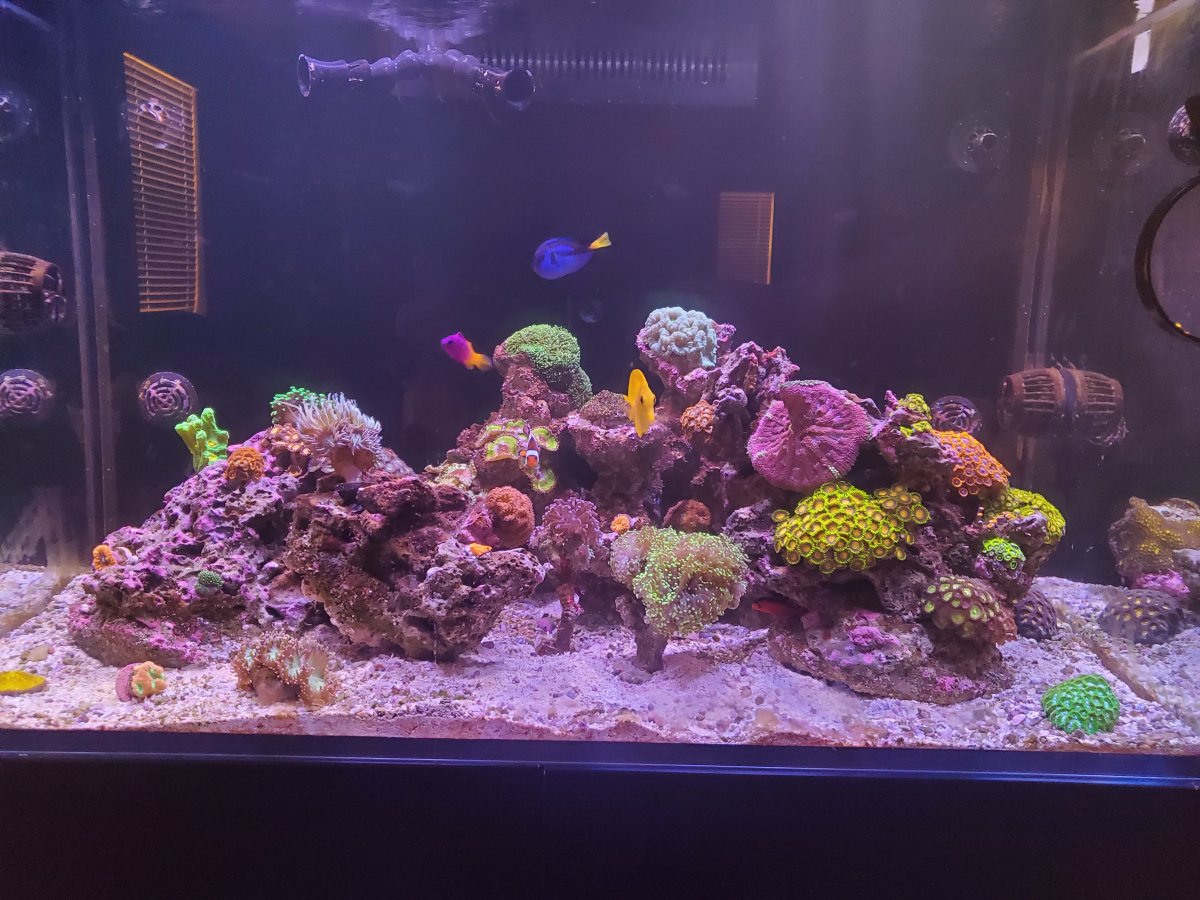 Added another Neptune DOS for auto water changes. Looking forward to not having to carry 5 gallon buckets of water up and downstairs every weekend!!
OP