Well, if you look at my prior build, you will see I lost it in the great Texas freeze of '21. So when my wife and I were discussing what to do next, we decided we were going to upgrade to a little bit bigger tank. There were a few things about the last one that was getting annoying as the tank matured. But all is in the past!

We went shopping and I really wanted an 8 foot tank, so we ended up purchasing the 8 foot Crystaline Series from Planet Aquariums. Planet tanks are made locally here in Arlington, TX. In fact, I know exactly where their facility is, I used to go down to that area for work. Anyway, ordered it in March, on my birthday! and it was delivered on May 14th! 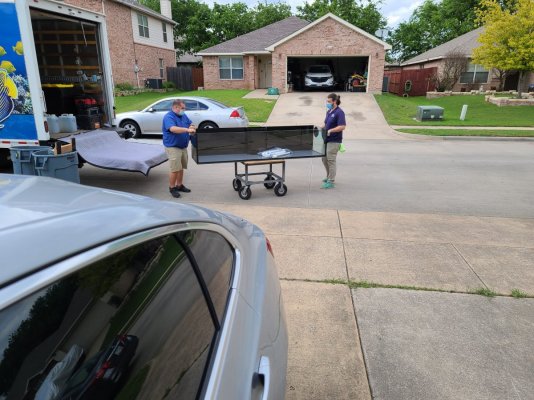 When we purchased it, we had our choice of stand finishes, we chose the traditional Mahagony.....then my wife decided to re-pain the living room a grey....Had we thought ahead, would have chose a different finish. 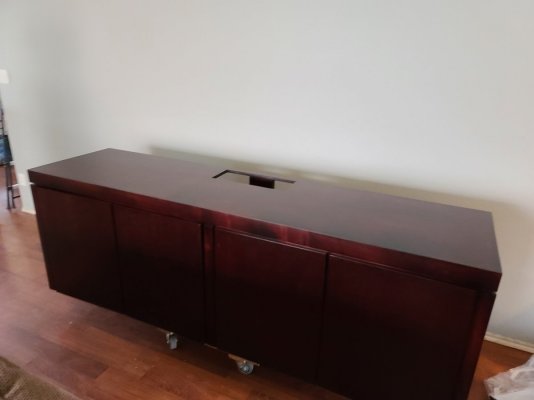 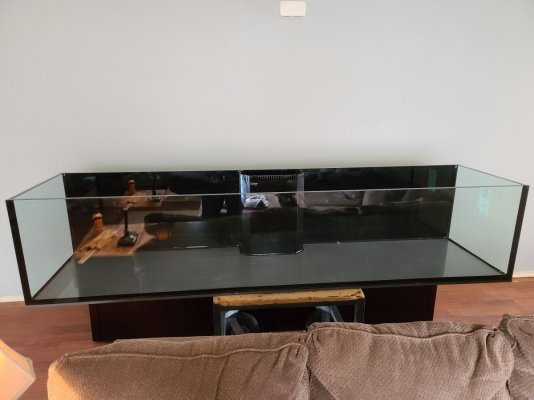 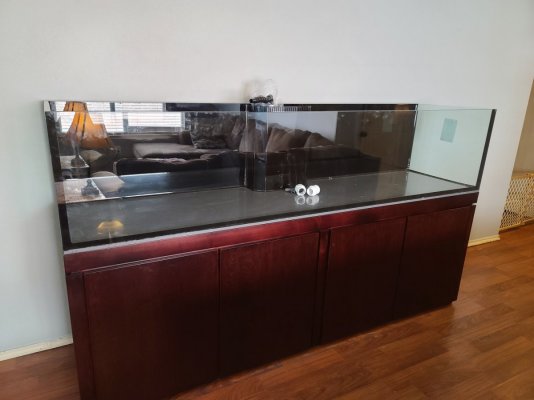 So the delivery guys leveled the tank for me, which took most of the time. You can't tell from the picture, but the front door is just off to the right...so it was an easy delivery for them. I definitely did not want to do it! So the dudes did forget the sump....it was a little funny, I asked the guy about it, he looked in the stand and walked out to talk to the other guy without saying a word. Then they came back in and said it was still at the warehouse. Which was kind of a bummer, it slowed my roll a little for setting up, I drove to go get it a couple days later. 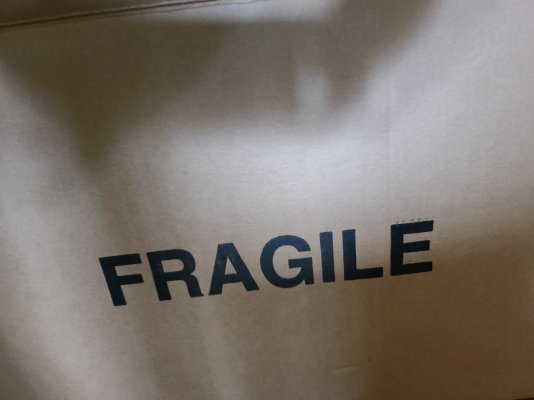 Must be Italian....name the movie! 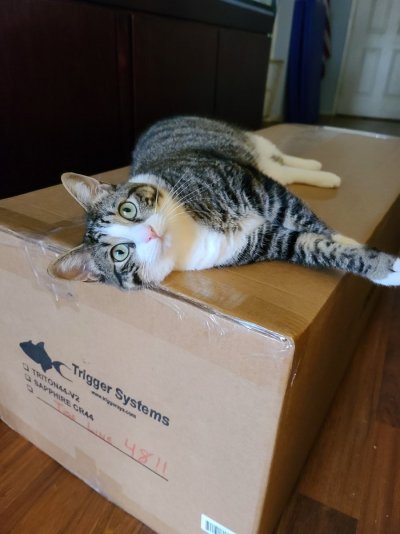 Then the cat decided I couldn't put the sump in the stand.


Awesome tank. Can't wait to see it come together

heck yeah! I have looked at those tank online sweet to see a build on it.

Wow! That’s gonna be a heck of a tank! Following along

Super exciting! Which LFS did you use?

Looking forward to the build.

Whew what a week, I had forgotten how much work it was to set one up. What made matters worse is when things don't fit like you want them to. Unfortunately I did not take very many pictures during the process, I was too busy cussing. ha! In fact, the skimmer was the biggest culprit of it all....so much so I started day drinking. 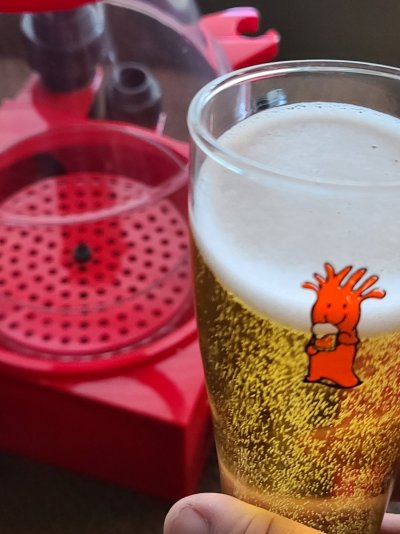 So the sump. What is kind of nice about the stand is all of the front supports are removable. Take out a couple screws and a rubber hammer and they pop right out. I would definitely not take them out if the tank had water in it, but it sure made it easy to slide this sump in there. The doors are also removable....sort of. That's one of the things that kind of bugs me about the tank. They put this nice quick detach hinges on the top hinge only, the bottom is still held in by a screw. This is probably done to save some space as they do stick into the cabinet a couple inches, but what's the point of a quick detach hinge, if I still have to go get a screw driver?

I also made a real quick controller board. I could have mounted it to the inside of the cabinet, but I had a random piece of plywood. Nice thing is it leans against the side and is held in place by one of those hinges I was complaining about. It's about 3 feet away from any water and 7 feet away from anything that splashes. 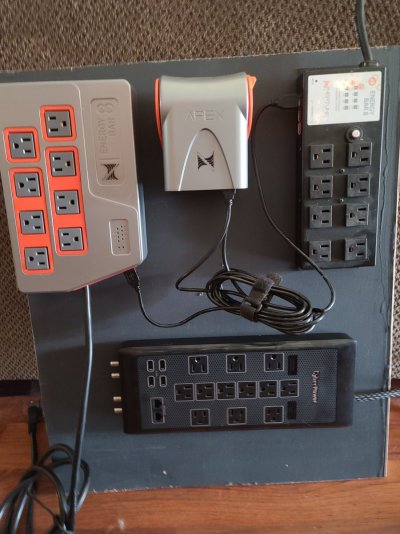 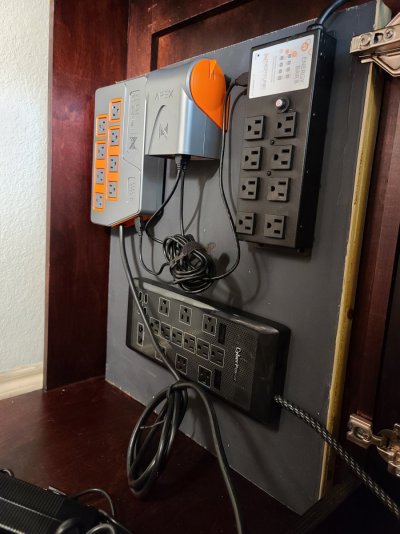 So the skimmer debacle. I bought a Regal 250-ext. I got sold on the one pump to mix the air, one pump to feed it water deal. I knew I was going to have to run it externally..hell it's designed for it. What I didn't realize is the cabinet was not going to be high enough to get the skimmer high enough to drain properly. so I thought, I'll just drill a hole in the sump, attach a bulkhead and run it through. Then I glued the output pieces all together and it shrunk, by a lot, which meant the base had to go even higher for the bulkhead idea to work....and then the stupid thing was too tall. 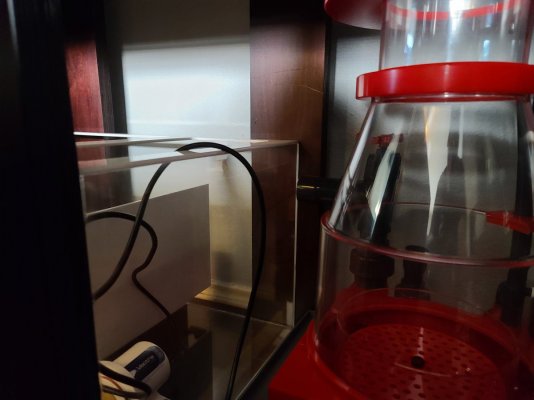 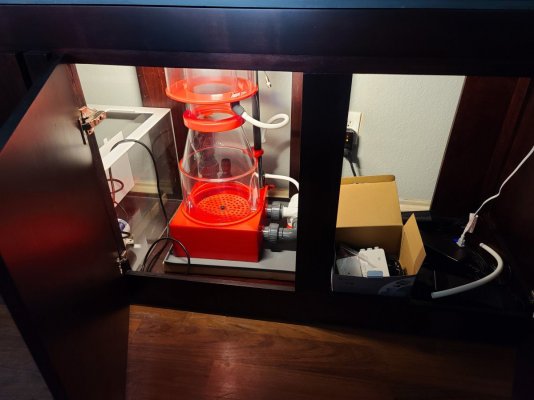 At this point, I really just wanted to send the stupid thing back and get something that would fit internally. Then I realized, I was past the 30 days where BRS would take it back and parts were glued together already. They may have worked with me had I called them, but I decided not to. I did what every 40 year old American father would do...I summoned all my Dad anger and said, "[expletive] I am going to [expletive][expletive]make it work"

So I cut a hole in the wall.

Right behind the wall where the tank sits, is our utility room. We had discussed putting the sump in there but decided against it. Didn't want something random falling from a shelf into the water causing an issue. At least the skimmer is an enclosed system for the most part. So I made a quick little box....which the cat thought was hers again.... 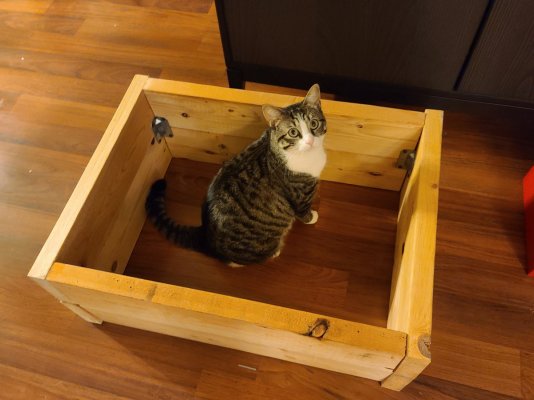 In the mean time, started filling the thing. 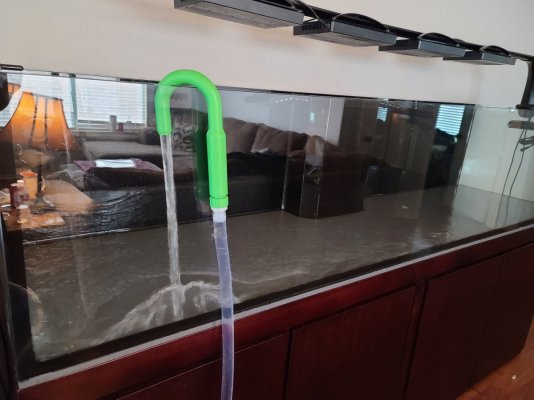 Very nice I just picked up that stand to put a cpl 60gallon frag tanks on. Cant imagine the beast of tank that goes on top.
Great to see comeback story.

What are the dimensions of the tank?

Beautiful set up, how many radions did you go with?
OP

DaneGer21 said:
What are the dimensions of the tank?
Click to expand...

I've got 4 G5 blues. Already had 2 from the previous tank. My plan is to let things start growing in and see how the shadowing is and maybe get something to help fill it out. Maybe 2 more g5 blues, maybe some reefbrite strips. We'll see thats probably a year or more out before corals shadowing themselves is a concern.

Shameless_Dood said:
Whew what a week, I had forgotten how much work it was to set one up. What made matters worse is when things don't fit like you want them to. Unfortunately I did not take very many pictures during the process, I was too busy cussing. ha! In fact, the skimmer was the biggest culprit of it all....so much so I started day drinking.

Is that a Fire Rock Brewing Co glass?
OP

Well it's been running for about a week. So far so good, no major issues. I did play whack-a-mole with a very slow leak on the return line. Ended up replacing one of the bulkheads, the seal just wouldn't stay water tight. Every time I touched it, water would seep out. And no matter how much threadtape I put on one of the connections it would seep out.

Anyway, first tank shot, I was sleeping on the couch (not because I spent way too much on this) and forgot I had set up a lunar cycle and the thing just looked amazing. 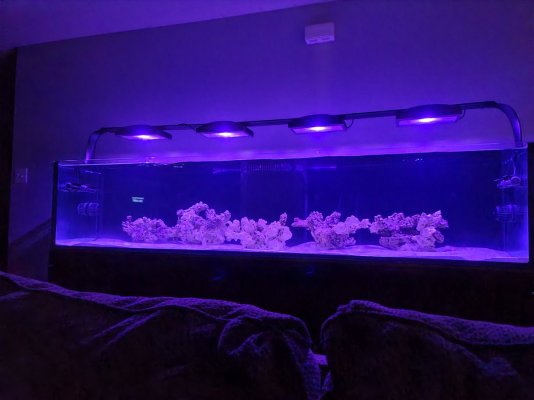 Also had a shipment come in from TSM Aquatics. I have decided, I am only buying fish from places that fully quarantine their livestock. I don't like for taking care of multiple tanks, the medications, the paranoia of accidentally transferring something. In fact, I had a bunch of fish already waiting in another tank and that's what happened. Eventhough I treated, flukes made it through and I didn't get it diagnosed quickly enough. Saved a couple, but they aren't quite healthy enough for me to justify releasing yet.

So this group was supposed to be batch #2 going in the tank, but instead it's batch 1. It was oh so much fine acclimating so many fish....had I thought ahead I would have pulled out a 20 gallon and done a drip acclimation. 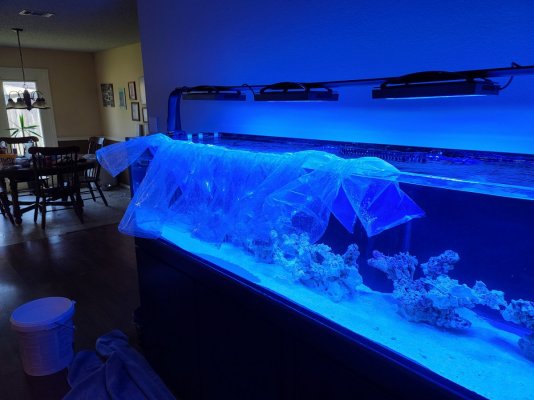 So far they are doing great. The blenny disappeared into a rock when released for a few days, but I saw him yesterday darting out of his hole to grab some food. The Wrasse and the Tang were fighting the other night my wife said, the Tang has definitely been acting like he got his butt whopped and staying to the far end of the tank.

If they cooperate, I'll get some pictures next time!

Congrats on getting some fish in there!

Congrats! I have the same exact tank, it’s odd that you didn’t get quick disconnect hinges on all doors as I have them. Looking good!
OP

Hydrored said:
Congrats! I have the same exact tank, it’s odd that you didn’t get quick disconnect hinges on all doors as I have them. Looking good!
Click to expand...

Well they are on all the doors, just the top hinge on all of them. I think they did that to save room for the sump because it would cut into the space down there, I don't know....but it is odd.