Started dismantling the tank at 0730, 8 buckets full of rock and livestock loaded into the wife's car, the 4 with livestock had the addition of battery powered bubblers (other 4 just rocks and water), plus one bin of loose corals in Tupperware. The tank and stand loaded into the back of my truck with tools and firewood. Combed through the sand for snails and ditched it at the old house, have 80 lbs Bahamas Oolite ready for the rebuild. 2 totes loaded with tank supplies and hardware on the truck back seat. About 12 hours later we had everything loaded into 2-30 gal totes at the new house with pumps, bubblers and heaters, coming back up to temp, where everyone is currently living temporarily for a few days while we bring in the tank, clean everything with citric acid, and rebuild.

Everything went fairly according to plan, except I didn't get the Melanurus wrasse out early enough and he buried himself and it took some time to gently locate and dig him out of the 120 lb sand bed.. Hoping he makes it unscathed.. Otherwise I was able to gently remove rocks and livestock a few at a time without clouding up the water.

Also no sign of our yellow Watchman Goby, he had been MIA for a few weeks, now Pistol shrimp is officially single (for now)

Only 2 surprises otherwise, 1 was about a 10" bristle worm that jumped out of one of the base rocks, holy mackerel! He did not make the cut for the trip lol. The second was a freakin' 4.6 earthquake epicentered about 15 miles from the house right in the middle of dismantling the tank, as if things weren't nervous enough. Can never get used to the quakes here, no issues from it though.

Otherwise, I forgot how heavy I made the stand lol, bit it a pain to man handle that thing myself into the truck! Wife tried to lift one end to help and said "Nope" lol..

Anyway, welcome to my new disaster of a fish room!! Build thread part deux to commence 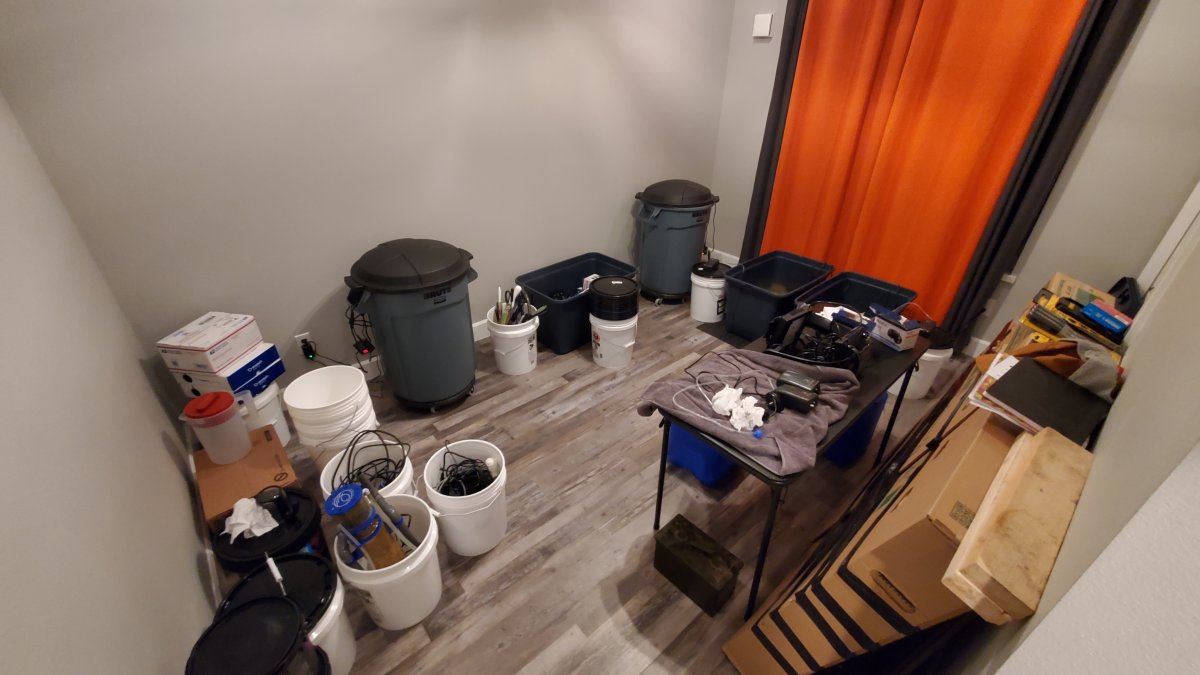 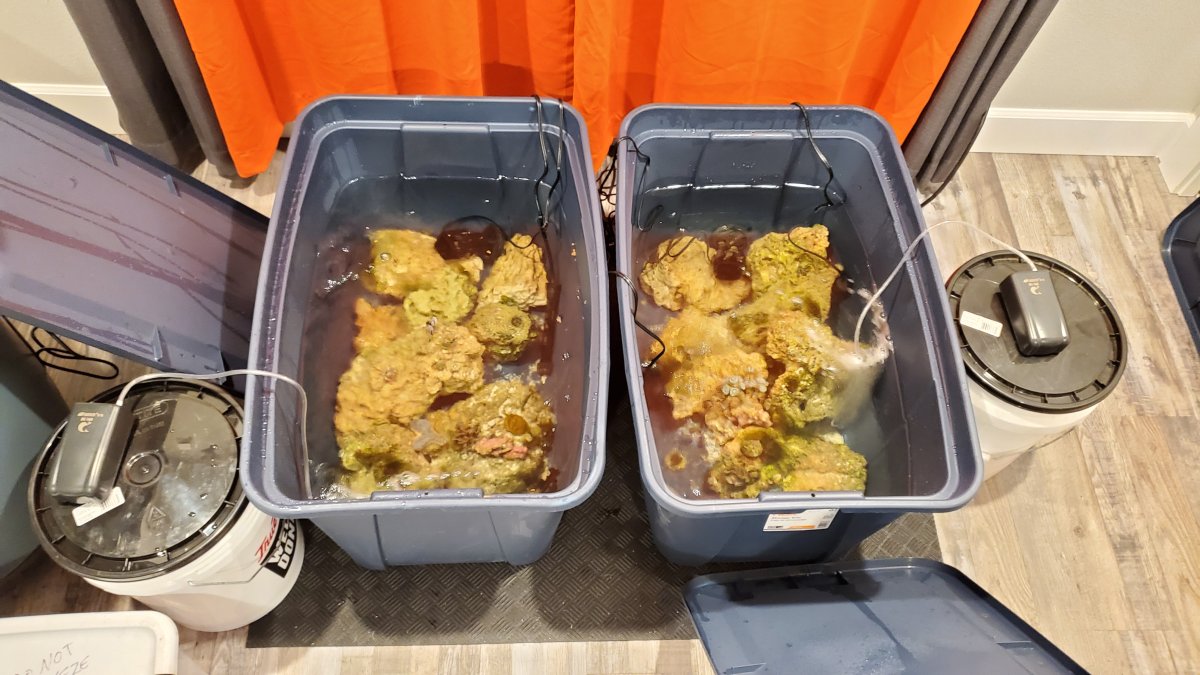 Everything is cleaned, tank is leveled and in place, ready for setup! Powerheads, heaters, wavemaker and frag rack all got a 48 hour soak in a citric acid solution (1 cup/gal) with the skimmer running on the side of the bucket as well. Only issue was knocking off an internal deflector on the skimmer when brushing it, not sure I'll be able to get that back in place.. Posted a quick thread on it:

Cleaning my HOB Eshopps skimmer today, I bumped this deflector piece that sits above the outlet pipe and it popped off. Definitely no way I'm getting it back on there.. Should I be concerned? TIA!

In preparation I'll review my SW brute further today, we have some sallt precipitate in there. Of the few weeks it has been mixing with a heater and pump, the pump had shut down with an error code for a bit, while unattended at the new house. When I found it there was precipitate on the heater and pump - I'm wondering if the pump has been running hotter along with its shut-down issues.. I rinsed it and it restarted, although did suffer another error and shutdown yesterday. Brand new Jebao return pump, bah..

The battery bubblers we have lasted 2.5 days on fresh D batteries - I did not put them back in after that since we have the powerheads creating a good amount of surface agitation in there, figuring we'll be fine..

Otherwise the happiest campers in dark totes have been the Tubastreas, everyone else is ready to be home lol. 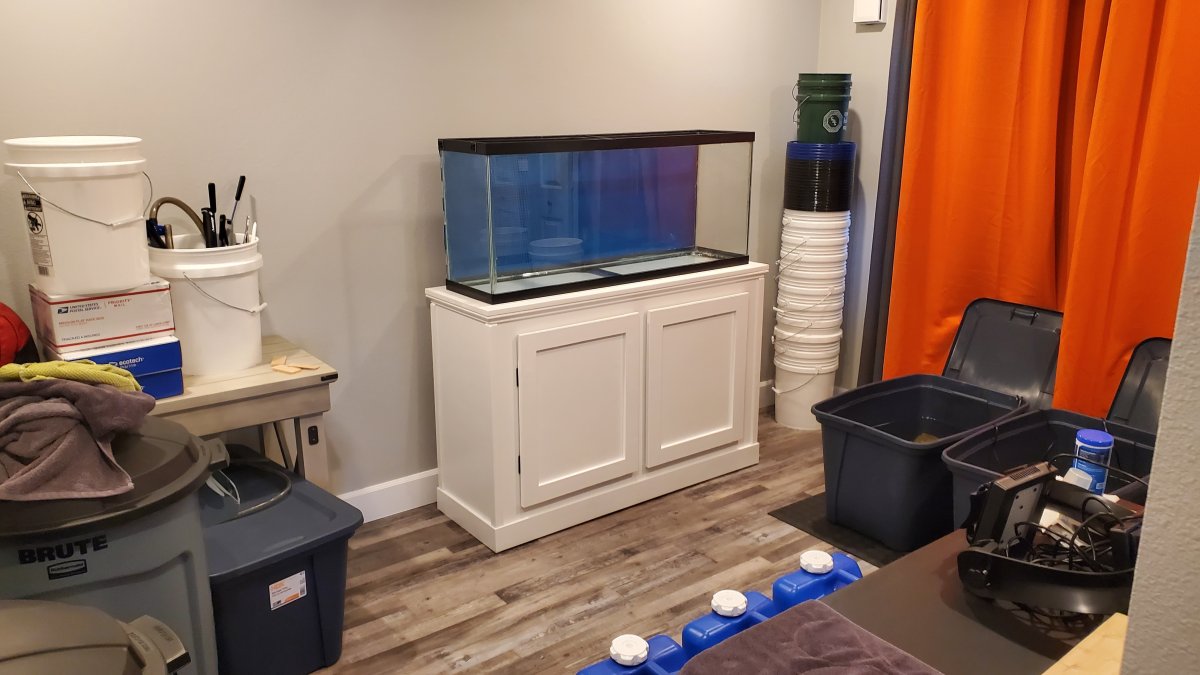 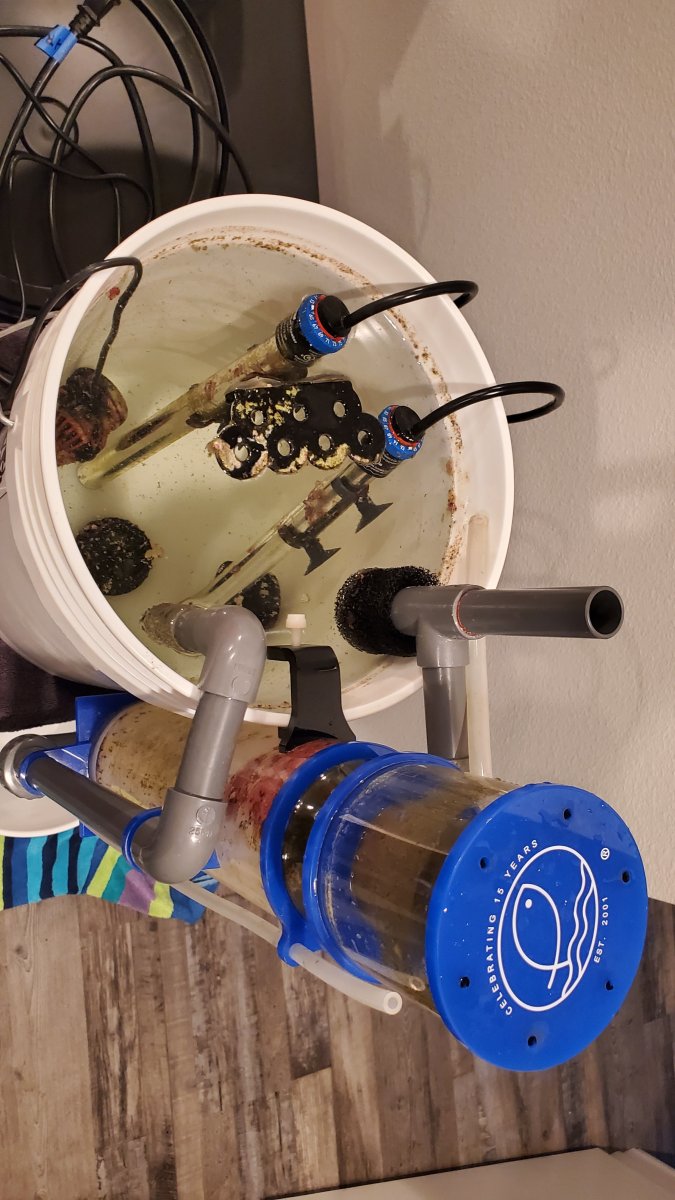 Rating - 0%
0   0   0
Unrelated, reposting these in my own thread - northern lights from our house (I promised more Alaska stuff in here!) 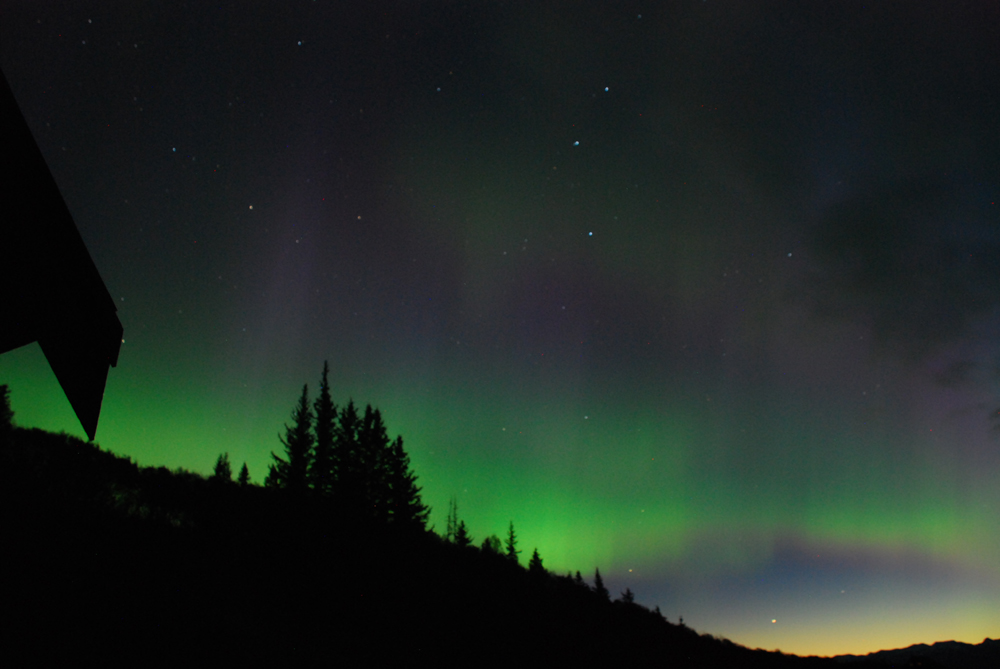 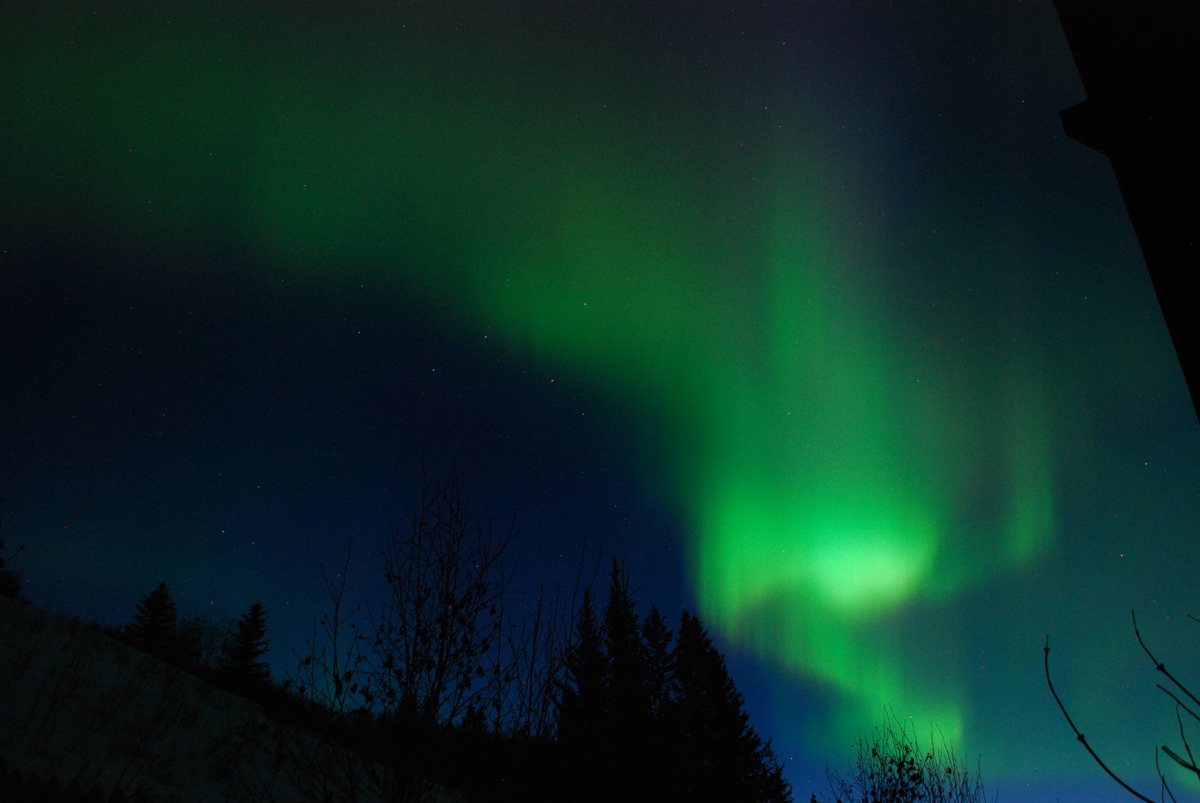 Rating - 0%
0   0   0
I don't know anything about battery bubblers but I'm thinking of having some on hand for emergencies. What kind do you use?
OP

jmatt said:
I don't know anything about battery bubblers but I'm thinking of having some on hand for emergencies. What kind do you use?
Click to expand...

RESUN DC-160, they're in the $10 range on Amazon so I picked up 4 for the journey. Come with air line and air stone. I'm also thinking definitely good to have a few on hand for emergencies! 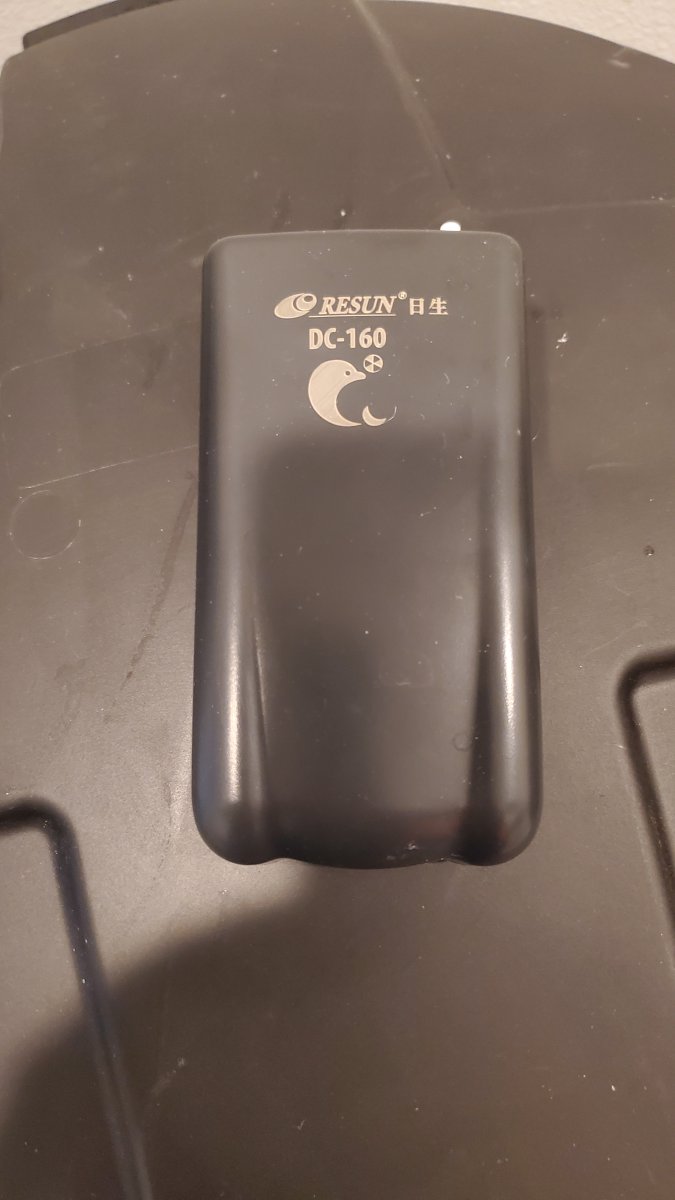 907_Reefer said:
RESUN DC-160, they're in the $10 range on Amazon so I picked up 4 for the journey. Come with air line and air stone. I'm also thinking definitely good to have a few on hand for emergencies!

Just ordered a few. Thanks for making me think of it.
OP

Rating - 0%
0   0   0
Progress for yesterday, all hardware installed, and the tank is online! Got about half of the rock moved in to get things going, with about 50% water from the prior setup and 50% new SW. I had intended to get all rock in, but it's so cloudy working with fresh sand we figured let's do half until it settles, leave 1 of the 2 totes online with the second half and then finalize tomorrow (today), when we can actually see to aquascape.

We used 80 lbs new Bahamas Oolite live sand, the original 120 was ditched at the old house. I'm liking this sand bed MUCH better. It seems a reasonable depth now lol.. 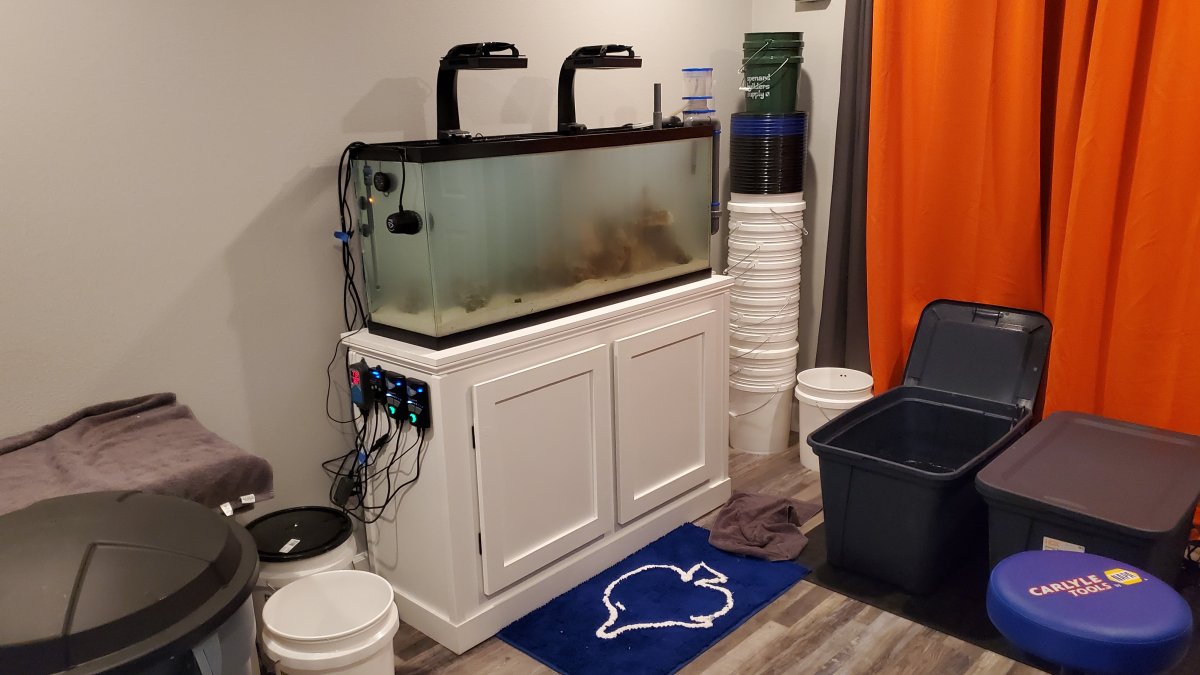 As we shut down 1 tote, the inhabitants from it were moved into the tank - Pistol Shrimp, Melanurus Wrasse, Royal Gramma, assorted snails and hermits, tiger cowrie and turbo snail. They ain't thrilled, but all alive and kicking. In tote #2 remains our clown pair and Lawnmower Blenny, more snails/hermits and the remainder of rock.

The tank cleared up this morning, pistol shrimp is a little out of sorts without his Goby buddy to hang out with (MIA before the move), he will have to be replaced as soon as we can get to the LFS (which is now 300 miles away).. 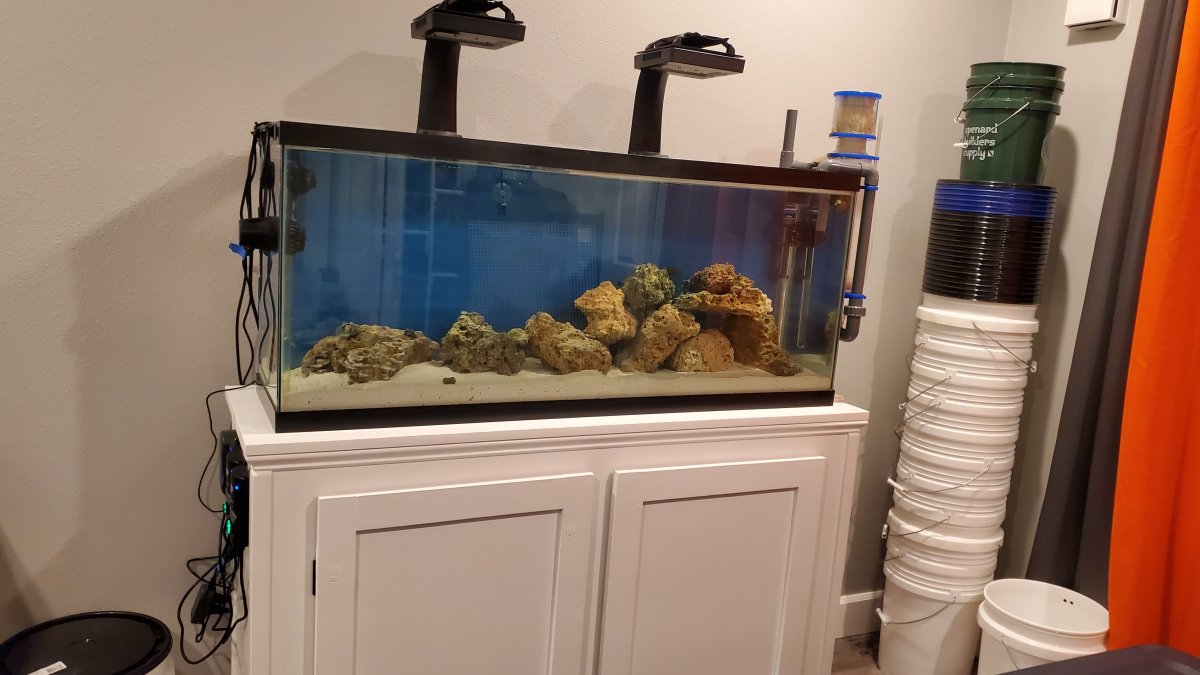 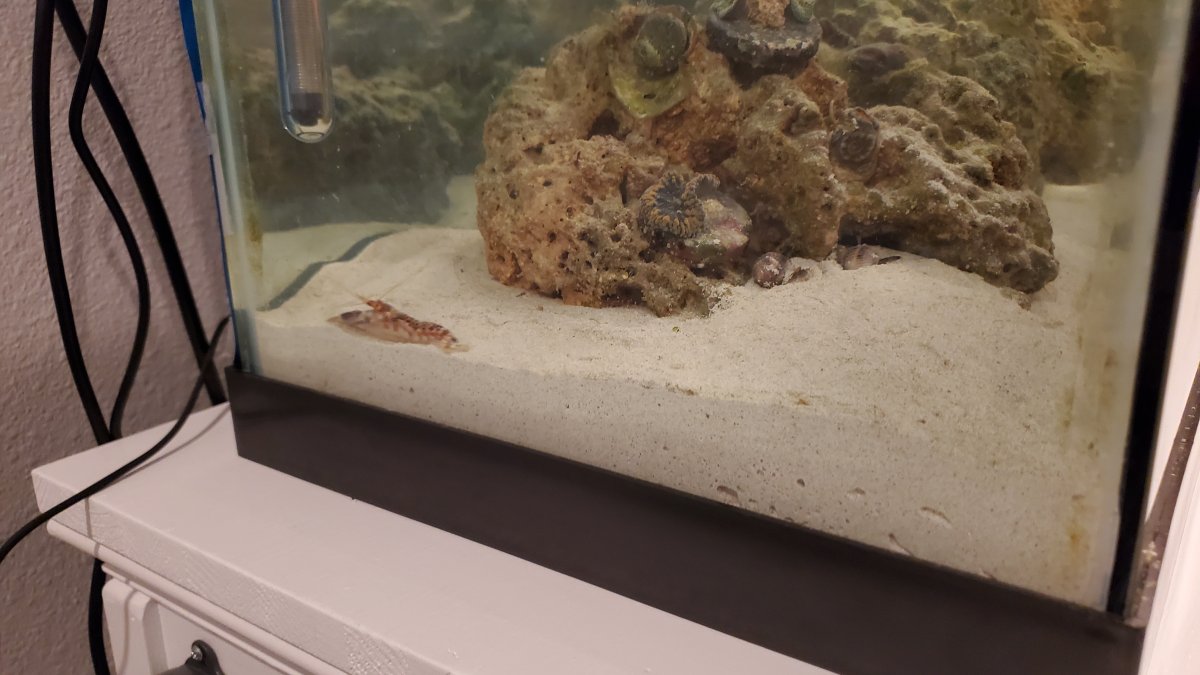 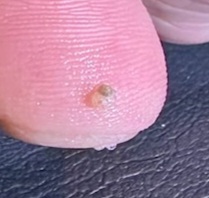 Mr. Wrasse was NOT thrilled to be moved again, spent the first little bit in there stabbing at the sand and breached the top of the water once - we were about to create a makeshift cover out of towels for the night but he settled down after a while, probably buried himself.. 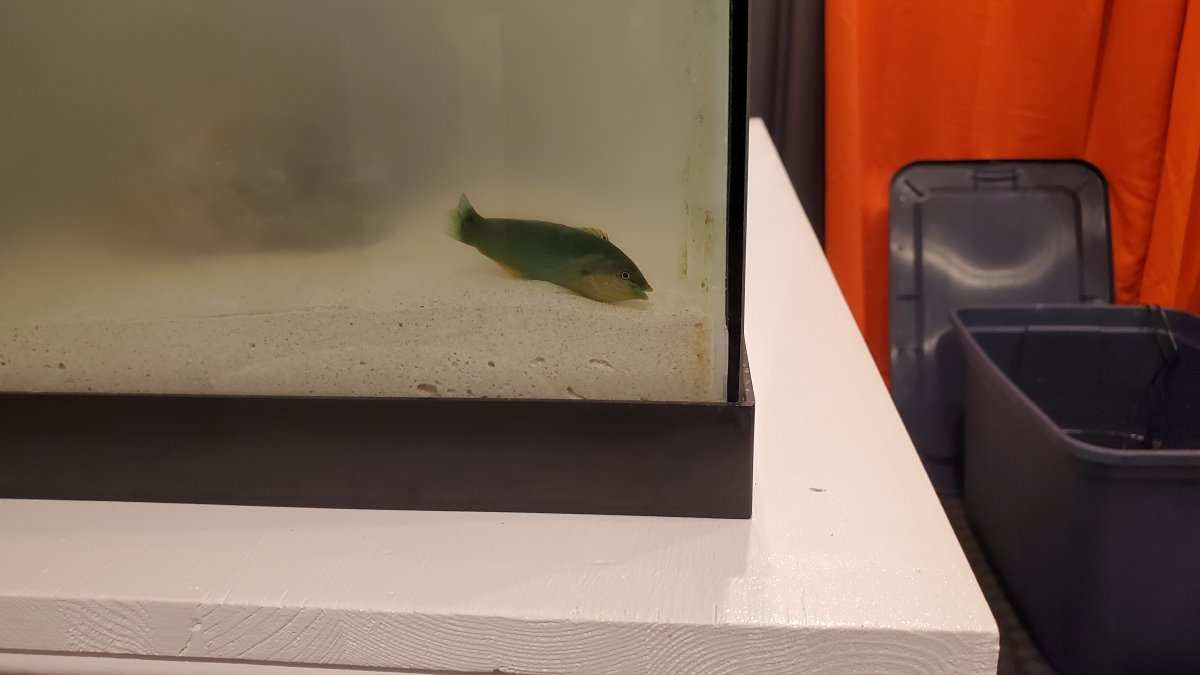 One other note, we have pods!! As I'm picking rock from the totes and giving them a quick algea brushing, I flip one over and see a number of the little guys scurrying around back into crevices. No time for photo ID but that's what it looks like to me!!

Coffee now, then back to work on the tank

Rating - 0%
0   0   0
Now I just have to figure out my plan with the lights.. Leave off for 1 more week? Start sooner but 10% schedule and ramp up slowly? We were at 33% schedule at the prior house. I feel like the corals are ready for lights, all the fish know how to hide other than the Clowns who don't care about much . But I don't want to rush things.

One thing I know I'm doing is reducing the light duration, once it comes on. I had initially increased the AB+ schedule by an hour or so, little over maybe. Will be cutting that back to help battle algae in this setup for sure.

I guess Alaska makes one rethink the definition of "local".
OP

jmatt said:
I guess Alaska makes one rethink the definition of "local".
Click to expand...

It's a big state! 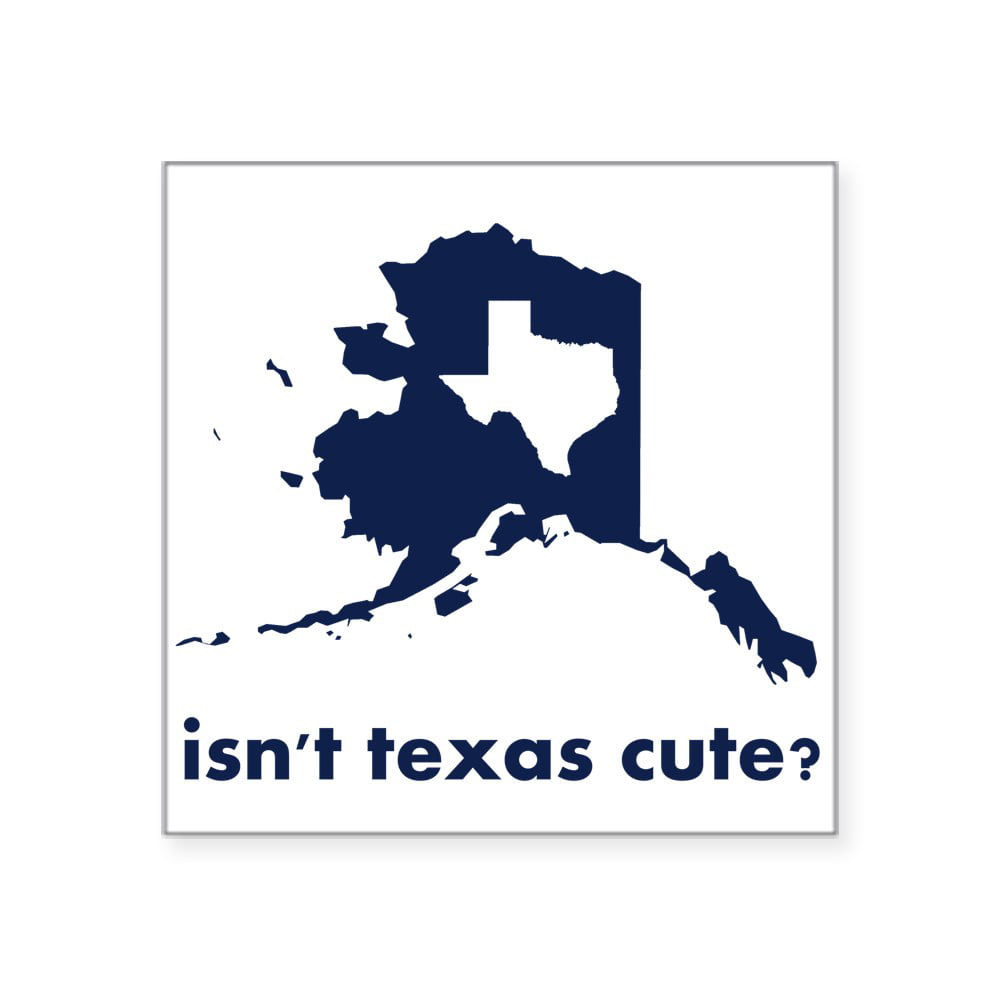 Rating - 0%
0   0   0
Completed setup yesterday, everyone is moved into the tank and even the wrasse settled!

This project was stressful lol. But, it was really nice to have a second shot at configurations, sand quantity and particularly aquascaping. I've been reading a lot of awesome threads here (I should link to some..) about focal points yadda yadda and we ended up as below. I'm loving the result, way better than our original setup of just piling 90 lbs of rock in there. More caves, more swimming space, etc 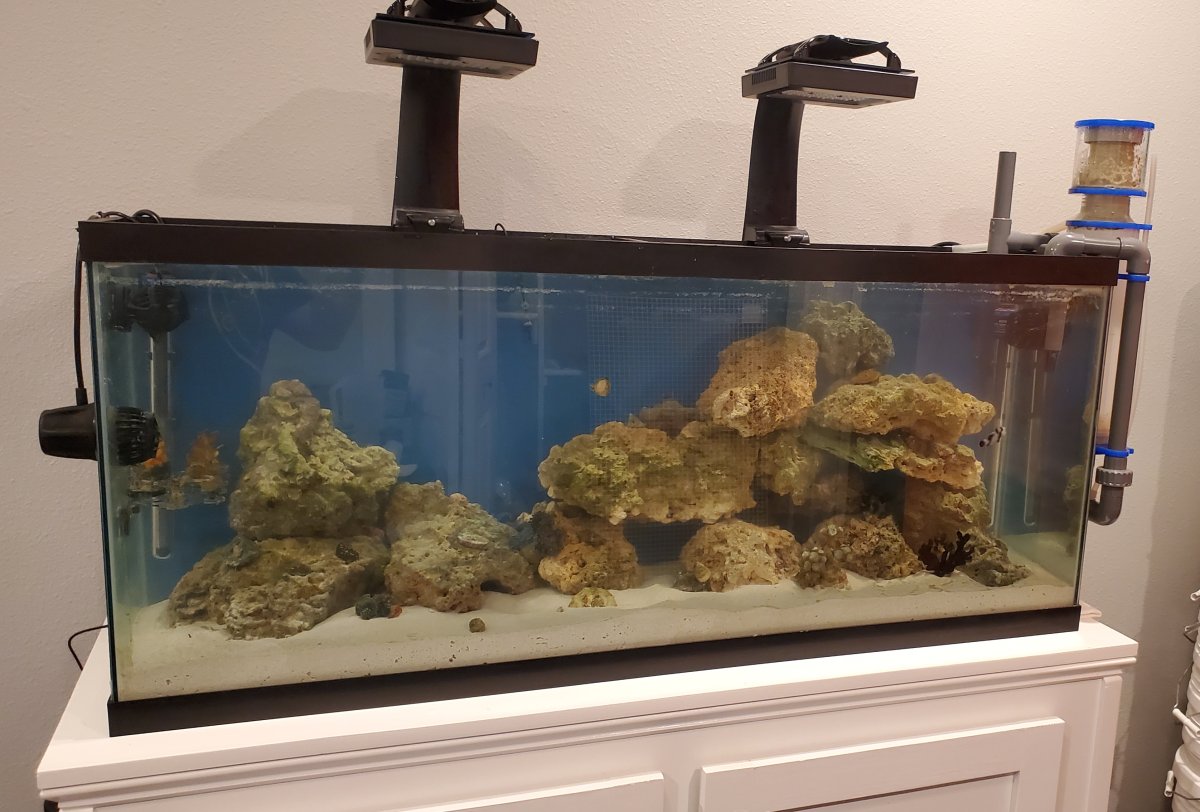 The Clowns took no time locating their frogspawn! Now to get some light on it and the other corals shortly.. 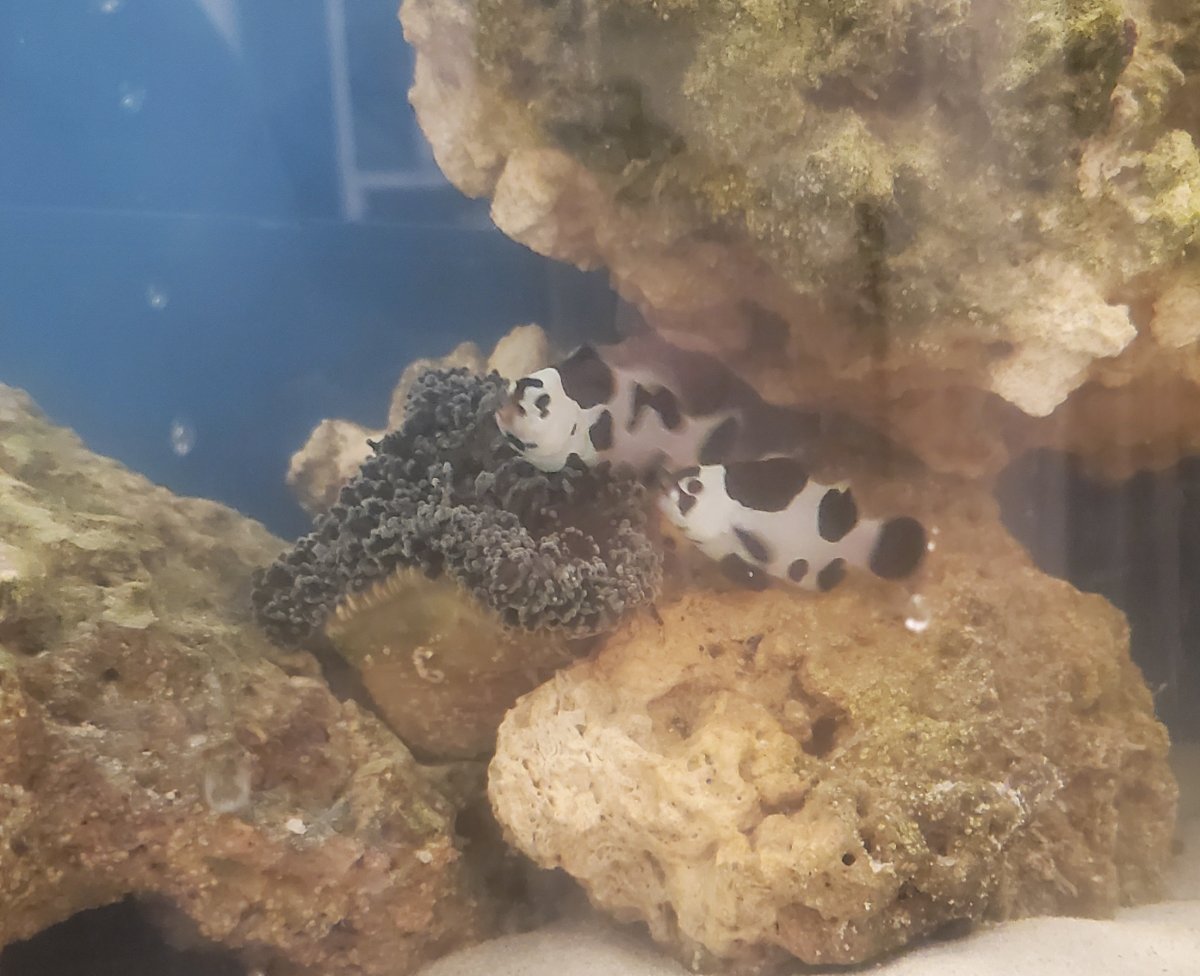 I had picked up a Reefing Art frag rack off Amazon as well, installed yesterday. This thing is nice! The magnets are super strong, I had one loose on the table and it snapped in from about 6" away, so hard it knocked the glue off the back piece. Dab of BRS super glue and we were off and running. 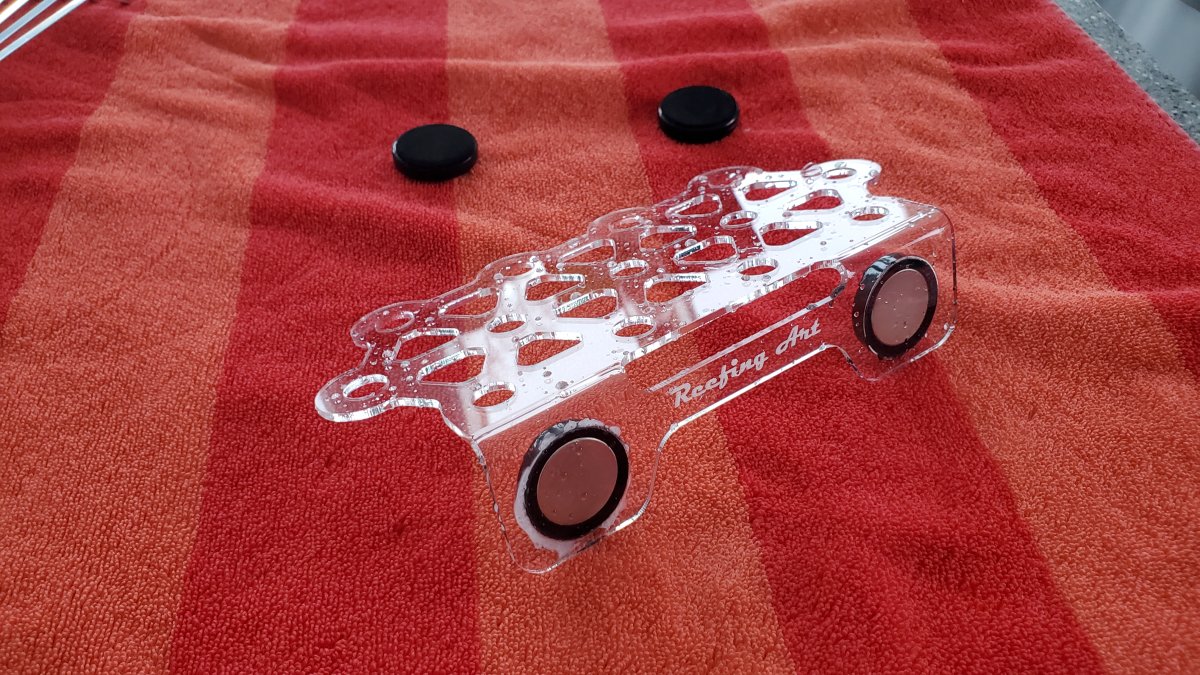 Pardon my sad frags which haven't seen light in a week! And the cloudy water from aquascaping. The Tubastreas are thrilled with the darkness though lol. 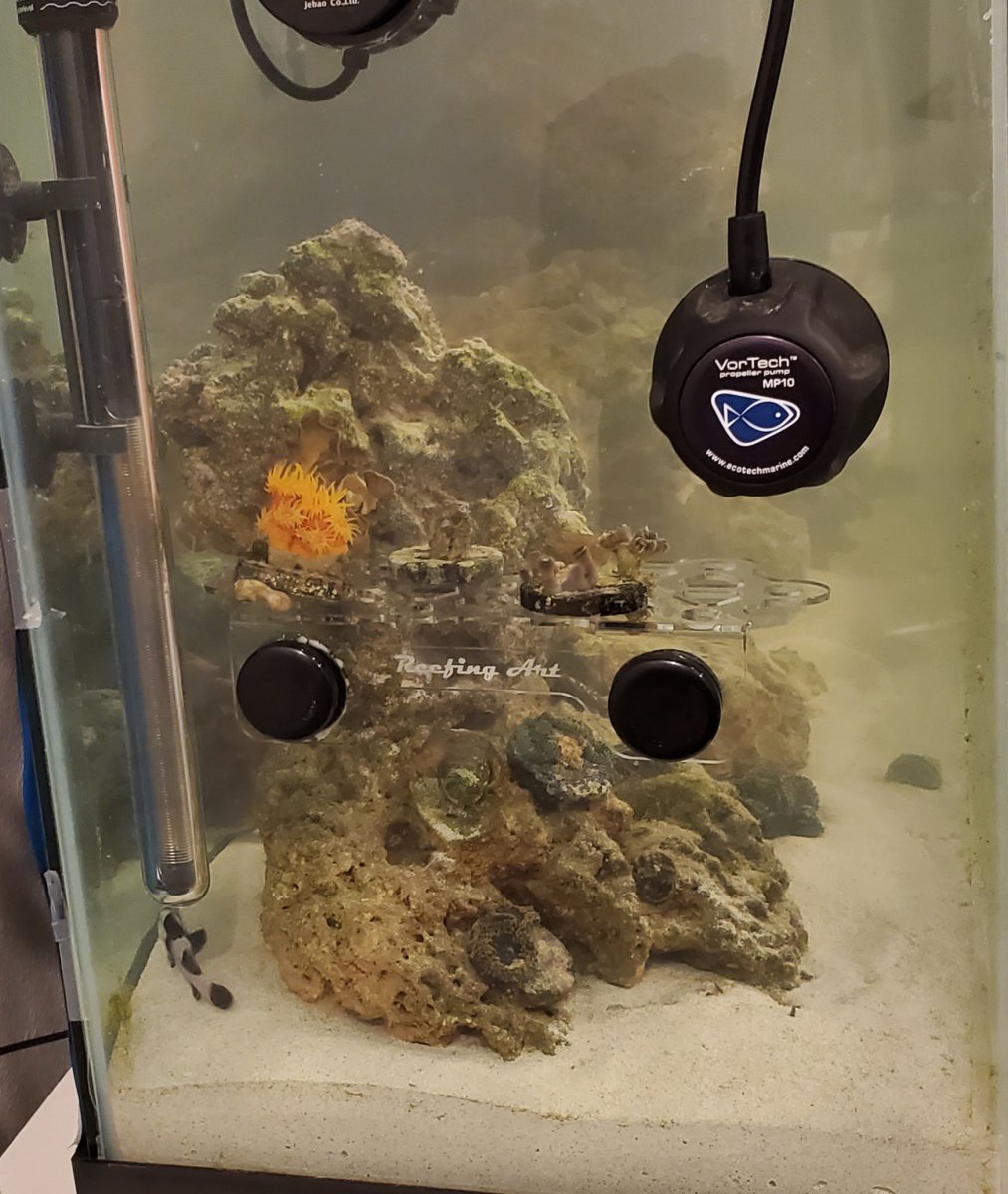 I think I'm going to get the lights fired up today or tomorrow. Otherwise, have a bunch of cleaning to finish outside of the tank, install the Tunze ATO, wire management, and then I can play with the new Avast Marine Plank Feeder
OP

Rating - 0%
0   0   0
Lights on, AB+ schedule with lighting duration reduced and 10% schedule. Corals immediately happier lol. Now if I could just find my camera filters... They're in one of these piles of stuff from the old house.. 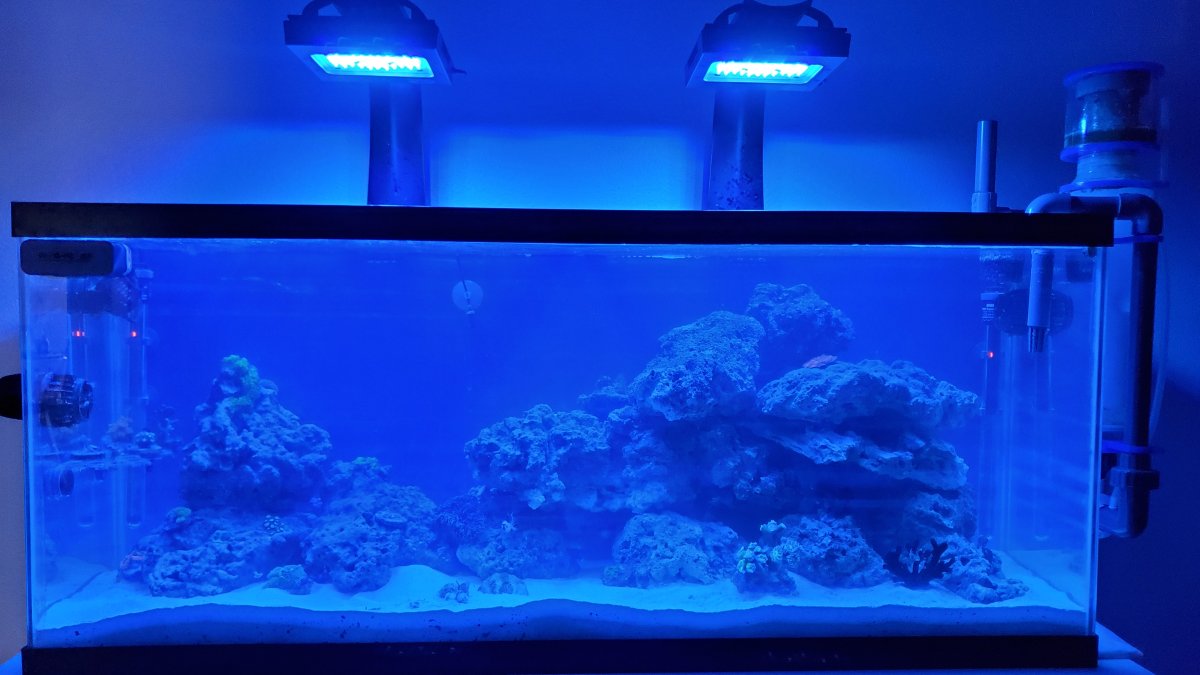 Also had posted a separate thread for ID of this Babylonia snail, seen here joining in with the nassarious on a margarita snack. They're super hungry, tank will be getting over-fed shrimp and flakes for the foreseeable future.. 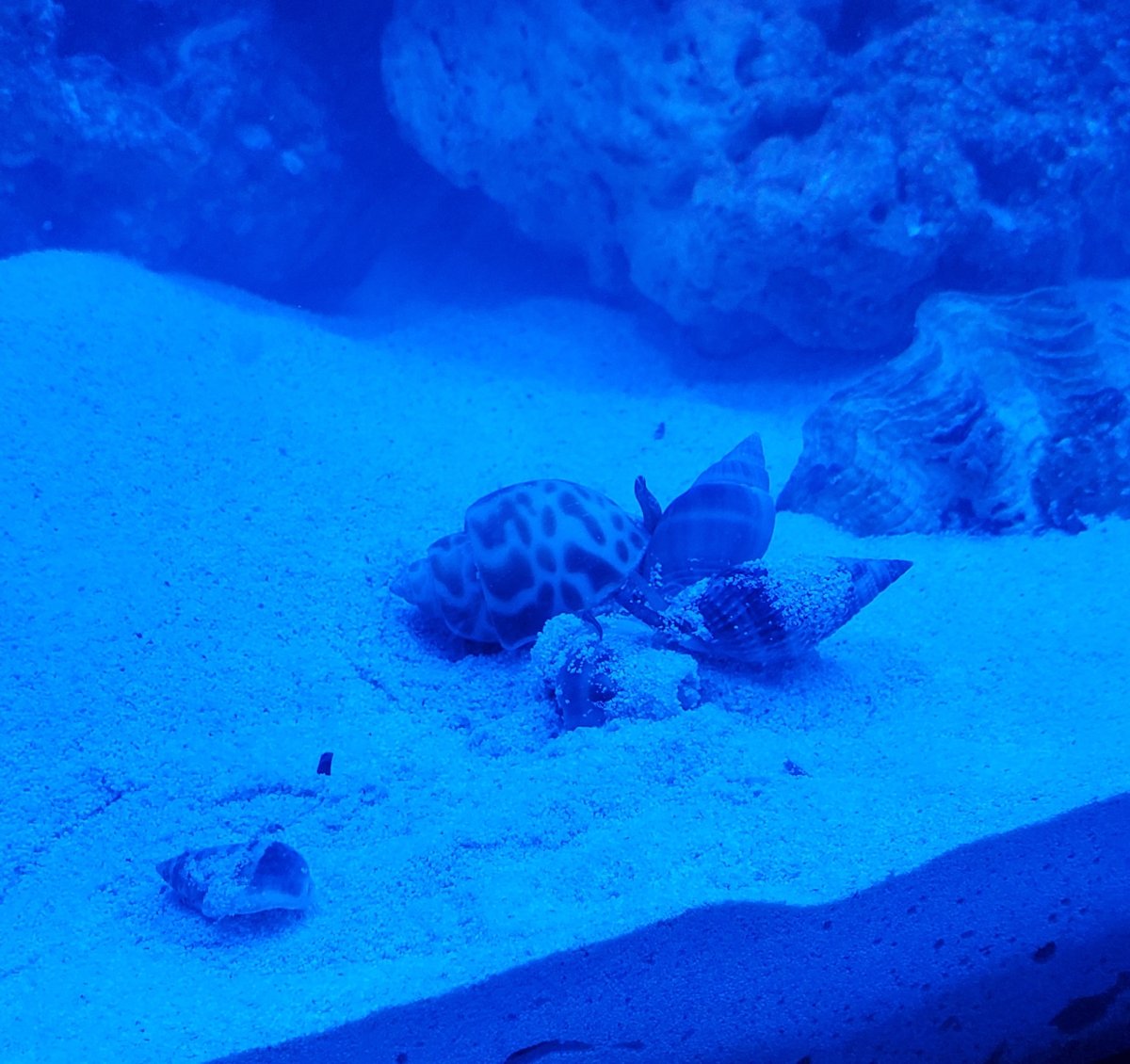 Rating - 0%
0   0   0
Didn't post this yesterday, but we suffered one loss on the first night of the new setup being online. After allll the moving shenanigans, in the middle of winter in Alaska, and getting everything finally settled back in the tank 7 days later, our lawnmower blenny jumped out overnight

Projects with Sam said:
oh bummer! he was Scott free!
Click to expand...

I know right!! We are bummed, he was a super cool dude. I was only worried about the wrasse jumping, when he settled I figured all was good. Never thought the lawnmower would be a jumper. 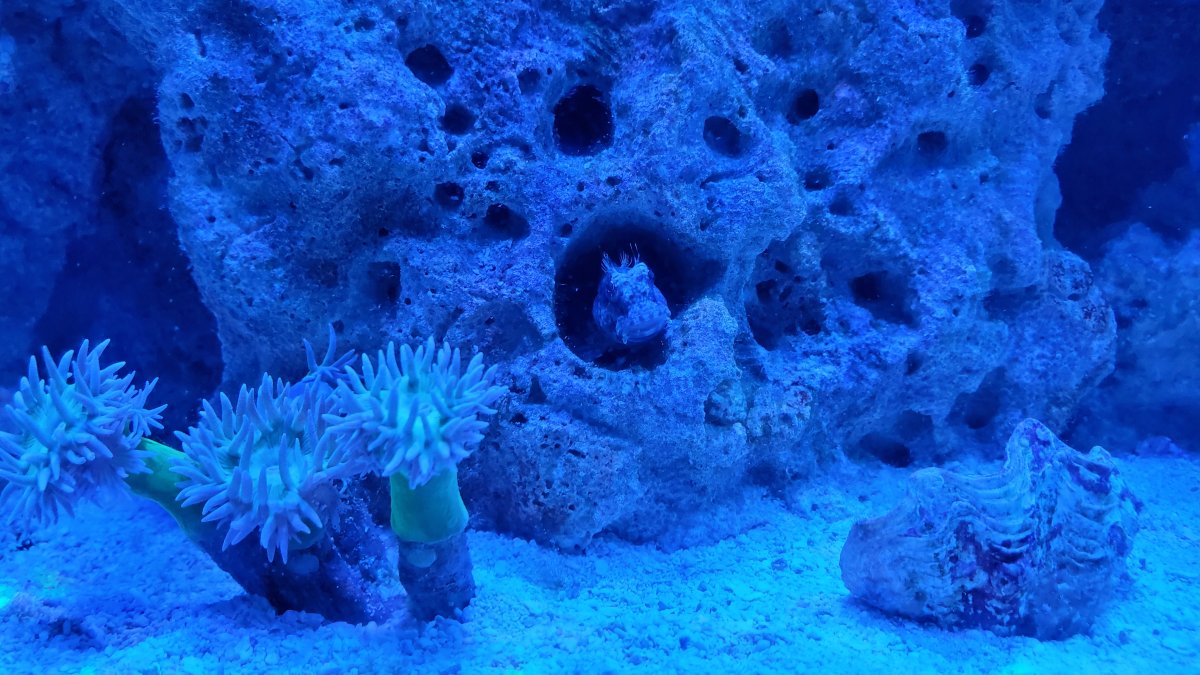 Rating - 0%
0   0   0
More cleanup today. One grapefruit sized rock didn't make the cut, wanted to keep as many as possible but the ~93 lbs we started with is too much unless you want nothing but rock in there. Re-used all but 1.

At any rate, it had been cooling in a separate bucket for a few days, room temp, no pump. I open the bucket to pull it today and found a number of micro brittle stars had jumped out and were still alive! Rescued and added back to the tank after a temp lukewarm period in tank water. 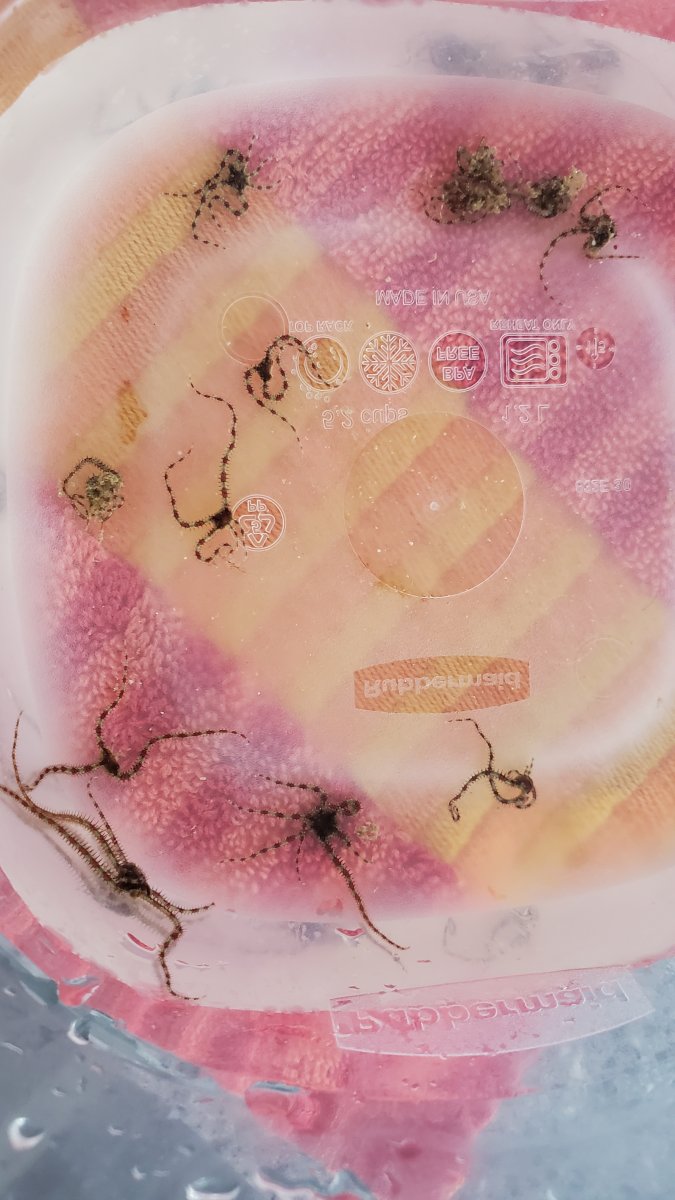 Alive and into the darkness they go 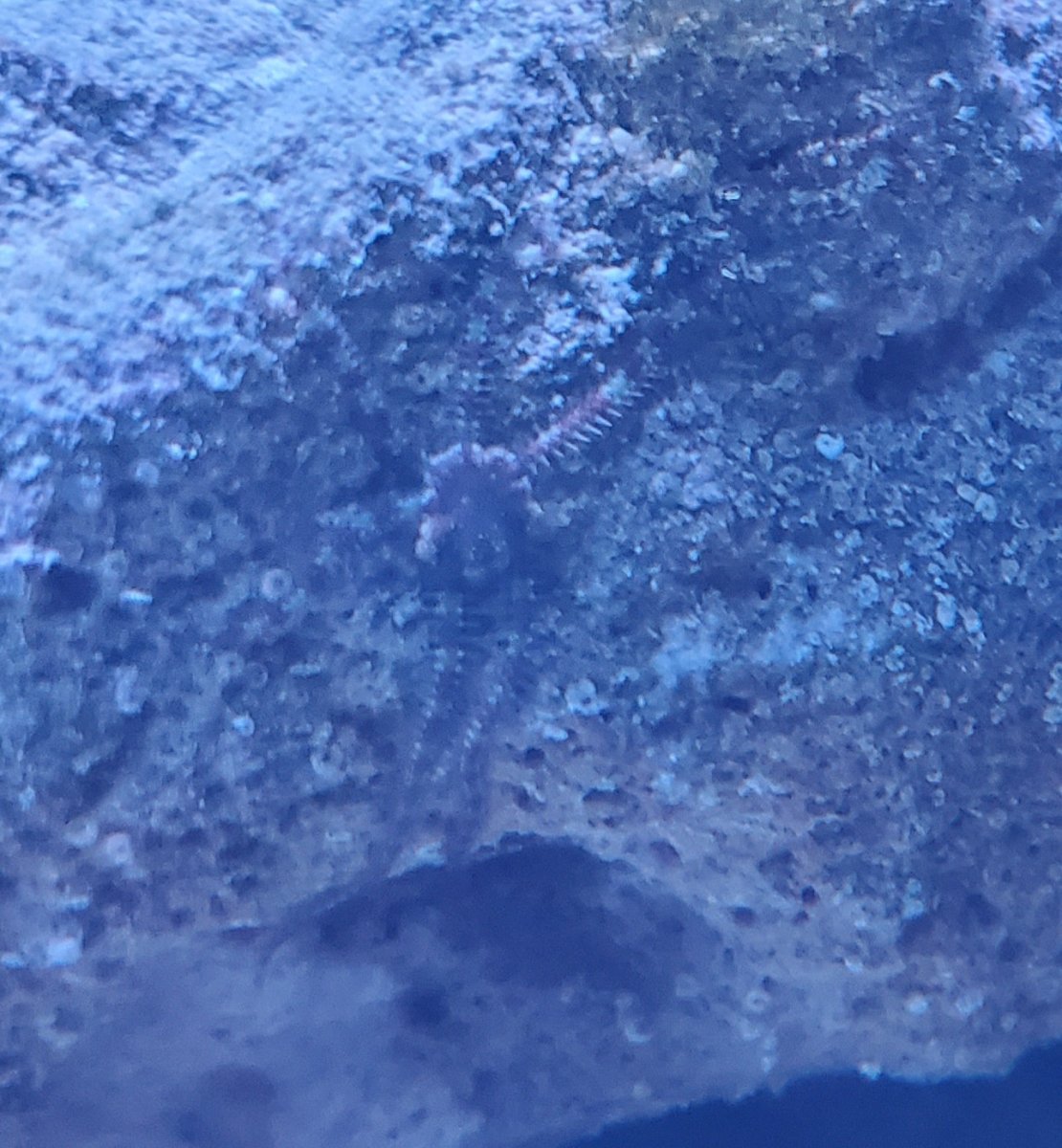 G
Build Thread Upgraded to 55 Gallon - anything i am missing.