I'd stick with the BRS pharma and just by the Part C to be dosed alongside.

Use the Balling A & B until your out, and then switch back to the BRS Pharma.

Maxx said:
I'd stick with the BRS pharma and just by the Part C to be dosed alongside.

Use the Balling A & B until your out, and then switch back to the BRS Pharma.
Click to expand...

Have you had similar results with it the Part B?

No. I'm just getting back into the hobby again after a few years .and have not used Tropic Marin balling light yet.
My plan was to go with the BRS Pharma and Part C because it seems to be the most cost effective method based on a couple of video's I've seen.

If you've had good success with BRS Pharma in the past,(and based on your tank, it looks like you have), I dont know that I would switch to something completely different.

Just my take on it.
OP

Today's project was getting the dosing pumps hung, plumbed, and primed. Waiting on GHL to deliver another powerbar so I can get the other three connected and operational but they're still showing a status of processing after three days. I'll start tidying up the wiring while I await its arrival. 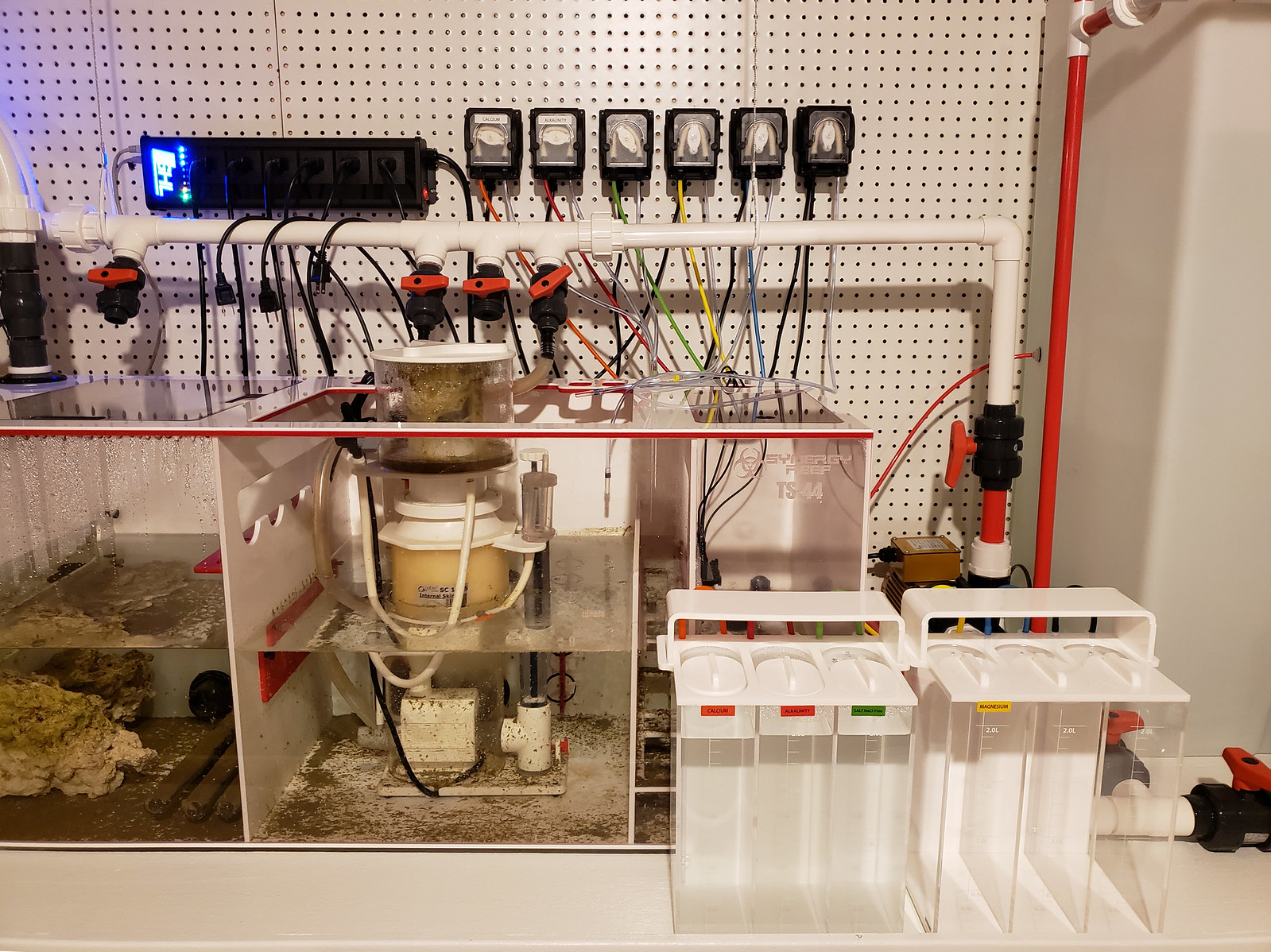 You're getting alot accomplished here.

Been a bit of a learning curve coming from the Reef Angel but I'm getting it, slowly LOL. Operationally, it has been flawless thus far but it also isn't really doing much right now.
OP

Diatoms or dinoflagellates popped up in our 150g a few days ago. The tank has been up and running for eight months now but it didn't have any corals (tried some test frags a few months back that all died). The tank was started with dry rock (had one or two pieces of live rock from our 75g to seed it) but on Jan 31st, I decided to snatch a couple more rocks from our 75g that also had a couple acroporas that I was willing to sacrifice (main colonies were still in the 75g). After a week, they looked normal. On Feb 7th, I decided to transfer most of the corals from the 75g to this 150g. For the first few days (four I believe), everything appeared normal and the tank was consuming about .3 dKh per day (negligible prior to the corals being added).

For lighting, I run six T5s (B+, ABS, P+, B+, ABS, B+) and four Kessils A360s. The Kessils were running at 25% intensity and 50% color but I changed the intensity and color to peak at 15% around Feb 11th (wish I had documented the change). I started getting some diatoms or dinoflagellates forming on the rocks approx Feb 15th. They die off (for lack of a better term) but return a few hours after lights on.

Lastly, alkalinity consumption dropped significantly when the diatom/dinoflagellates showed up (dosing went from 60ml per day down to 15ml per day). I'll revert the changes to the intensity/color channel on the Kessils and observe. I expect the nutrient levels to continue to rise as things balance out with the increased bio-load so it will likely remain impossible to attribute anything to a single source.

So there are a number of things that happened at once so it's impossible to narrow down a causal factor. The fish load had been low (three small fish for about seven of the months the tank has been up) so the NO3 and PO4 have largely been too low to measure. The tank now has 18 fish and obviously gets fed a lot more. As of Saturday, NO3 was approx 1ppm and PO4 was .006ppm. I also sent in a Triton ICP and N-Doc so it will be interesting to see what is shown there (Triton results typically show about 1/3 of the PO4 my Hanna comes up with so I'm expecting the ICP to show 0).

How are you treating the Diatoms and Dino's?

Maxx said:
How are you treating the Diatoms and Dino's?
Click to expand...

I wont; I'll let the nutrients come up and let things work themselves out. I've never had a tank where this remained an issue for more than a couple weeks and I doubt this will be any different.
Last edited: Friday at 4:59 PM
OP

ICP results are back and the only surprise there was phosphates were higher than I've been seeing via the Hanna; every other time I've had results from Triton, their results were roughly a third of what I was measuring.

Still waiting on the N-Doc results