Barebottom Reefers vs Sand Bed Reefers: Which one are you?

Sorry bout the typo . I meant to say
* I like HOW it looks

I like my BB and would be hard pressed to add sand. If one likes the animals that need sand or the aesthetics it creates particularly with negative space then that’s a solid reason. Can run whatever you want with success as plenty of examples out there.

for an sps reef though bb is so much easier to keep clean and to mimic a reef crest…. It’s rock bottom, not sand. While exceptions exist if you have shallow water acros sand looks very unnatural to me.

Crushed coral and sand so voted other. Mixed sized substrate is more natural than a single particle size sand. Oolitic sand is a pain. So I settled on a mix of fiji pink, local beach sand, and crushed coral
S

I voted other.
I've done crushed coral
Minimal sandbed
Deep sandbed (both 4 inch and 13 inch)
No sandbed
2-3inch sandbed.
On my current 400g I've got a black pvc floor, no sandbed. Plans are to let chalice ect cover it.
When I fill my 330g which will be in the same system, I'm probably going to add a sandbed to it since it will be mostly wrasse in it.

I have sand in my tank, it's a great filter that hopefully won't nuke my tank some day. Plus I love the melanarus wrasse so it needs somewhere to sleep.

Went Bare Bottom long time ago and never went back. What plagues alot of reefers, especially SPS dominated tanks are random STN and RTN from bacterial infections due to poor flow and dead spots. I use to think it was seasonal, when I use to get minor outbreaks and move acros around to remedy it, which was fine. I dont know if anyone actually have noted the same. I am experiencing somewhat the same now, which I am getting die offs and minor STN due to my colonies being so large in my 2.5 year old 600g system. Sure, it maybe shadowing and warfare, but poor circulation due to very large colonies will cause stagnant areas, which will allow bacterial build up in certain areas. I have 6 MP60's that are firing at 100% from 3pm-6pm, I did have to move them around to navigate the flow, but come to terms to chop up a few of my over grown colonies. If I had sand in the tank, it would be a sand storm in there. I believe sand is more harm then good long term and short. 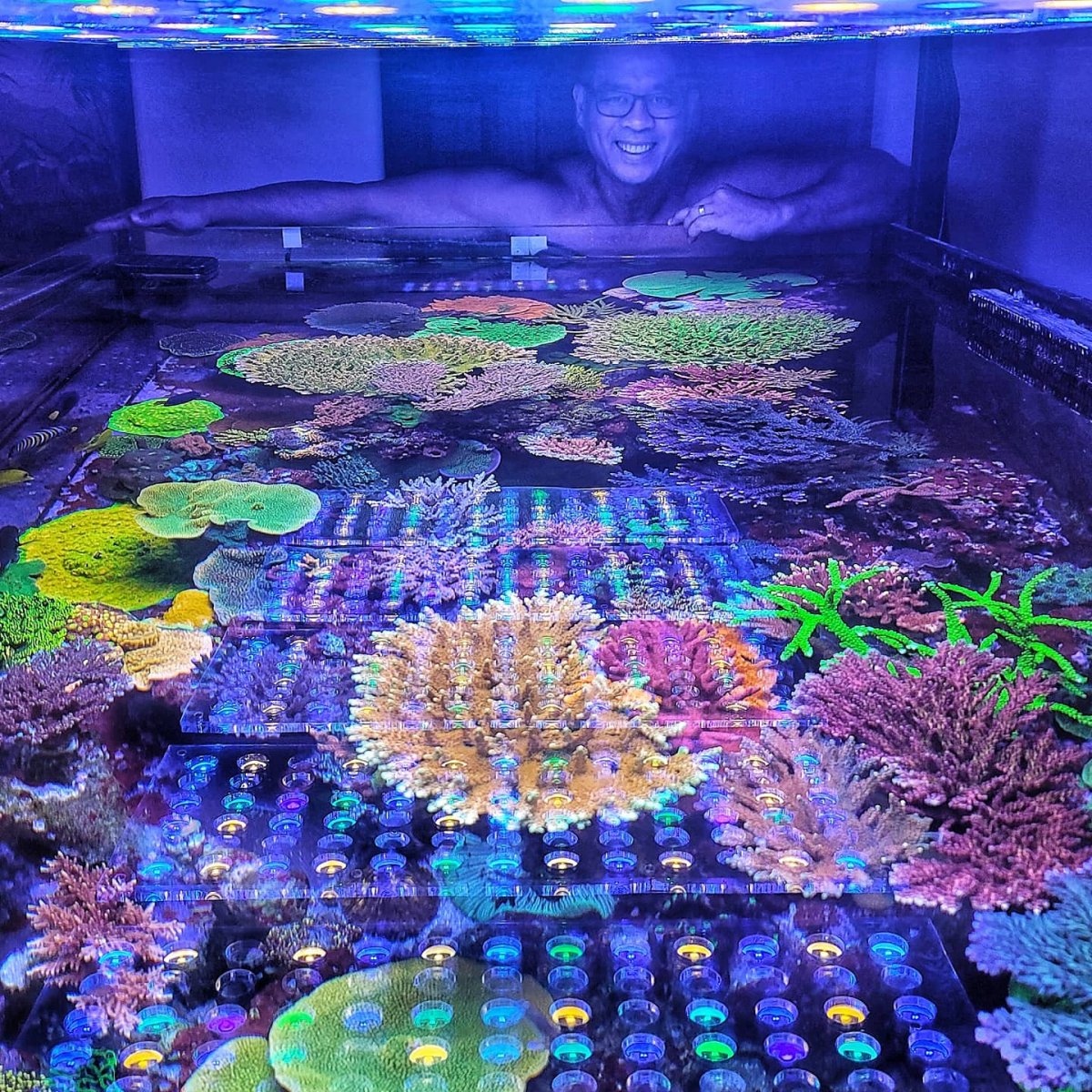 I have a 250 gallon with shallow sand bed and a single sand sifting starfish.

I’m very happy with this combo.

I really wanted to go bare bottom for ease of maintenance but got scared off after hearing how difficult it really is to get the tank up and stabilized so I added sand.
C

Bare bottom is the equivalent to putting a plastic pirate ship in your tank or neon signs on your tank. I mean its your tank feel free to do what you want but all of those look hokey to me

I have seen some amazing BB tanks, but I like sand in mine. As I am trying to replicate a reef setting I just feel sand has to be a part of it. Plus I like the additional bottom/sand dwelling inhabitants it allows.
E

I like the bare bottom with Green Polyp and pink purple coralline algae. Looking good for me and almost zero maintenance. My tangs love the coralline algae and keep them in check

2. Why do you choose one over the other?
My tank has TONS of flow for Acro domination. Sand would blow everywhere. BB is so easy to keep clean.

I have a 4" of fine aragonite sand in the back corners but pretty much bare bottom in the front center thanks to the flow pattern in the DT. That works for my Wrasses and gives other critters a place to live. I think sand provides a place for those critters to propagate. This allows for more organisms that recycle nutrients, and contribute to the food web.

For me the whole aim of having an aquarium is to try to replicate my small world as complex as possible. There's so much stuff thriving in the sand I could never give up on!
C

Prefer BB. Been very frustrated with substrate ever since I started the hobby.
B

I'm a scuba diver and I haven't dove an ocean with a bare bottom. Sand is the way to go!

Both. Always had sandbed in my tanks. But just started a new bare bottom office frag tank just to try bare bottom.

If it's a display tank I like having sand as it looks natural, but for a frag tank I think bare bottom might work well
Last edited: Oct 13, 2021

Sand. I have only had tanks with sand beds. Mainly for the natural look, and the inverts.

I can understand the appeal of not having a sand bed. Bare bottom tanks clearly have a maintenance edge as many here already attest. Of all of the ocean's properties we can replicate in our home aquarium sand (and rock) are givens for me. Never mind the critical functions they serve, many of the animals in my tanks would seem out of place and/or starve. Bare bottom tanks don't look natural [to me].

1. Are you a sand bottom or a bare bottom reefer?

2. Why do you choose one over the other? 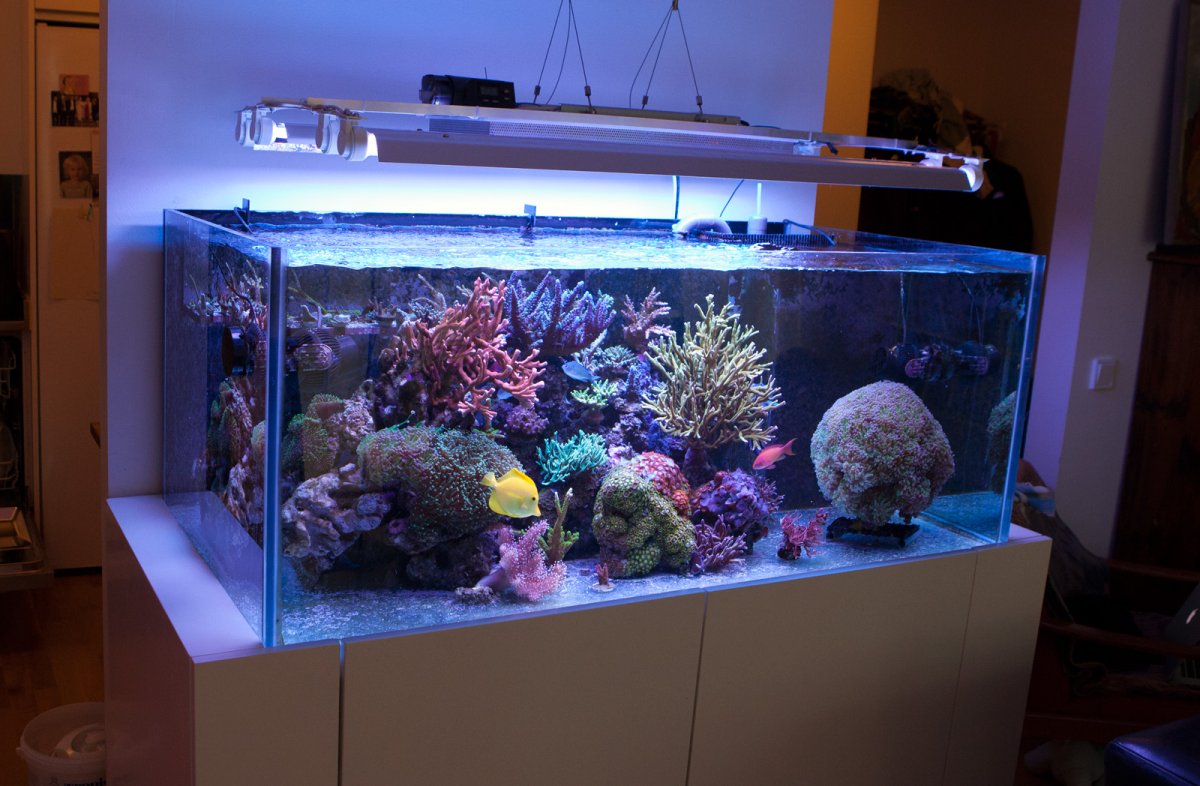 Definitely Sand Bed it’s the Natural thing to do plus benefits out weight the negative plus it’s so much nice.

QUESTION OF THE DAY The advantages and disadvantages of a bare bottom tank. Would you go BB?
5 6 7 8 9

QUESTION OF THE DAY How many LIGHTS are you using and your FAVORITE brand?
4 5 6 7 8

QUESTION OF THE DAY What's your favorite reef sand and why?
2 3 4