HI all
I started a 32 biocube beginning of January with 30lbs of dry rock and 1to 11/2 lbs of live rock. The cycle went well and lasted till about January 24 th . Started with a clean up crew of a couple snails and a few blue leg hermits . Purchased a fire fish who unfortunately passed away for none determined reason . Waited for about 2 weeks till I got a Royal Gramma then in a mother 2 weeks got a cardinal fish ,they were both doing great then add a pajama cardinal who apparently either had ick or velvet. I was not prepared and by St Patricks day all the fish had passed . I did have a small frag of zoas, duncan ,hammer , and cleanup crew and a cleaner shrimp.

I decide at that point I needed to leave the tank fish less till the end of May which is what I did. I picked up a 10g tank setup at the end of April filled added a couple of dry rock rubble I had left over from the tank build (never in that tank) . The qt tank cycled out by the end of may did a small water change . I got a purple firefish around mid June and it was doing great in the tank eating well no signs of any issues . I added to the DT july 8 th ish he is loving the tank and is the king of the reef for now . Five days ago purchased a Springeri Dottyback and it is currently in the QT eating well and not looking like it has no issues (will keep in qt for at least another week or 2 ) .

The corals are doing well and have added a second duncan (different coloring )and a blue mushroom . The first duncan has grown 6 new head all at once , hammer really not growing that much but seems happy always extended .

Clean up crew is doing okay have had some losses and added 2 nerite snails. The nerve snails seem happy as they have egg casings all over the tank . I have had these snails for about 3 months and just noticed 2 weeks ago the both have barnacles growing on them (i think is cool).

I am starting to get coralline growth on back wall ,glass,&rock .

Please give me feedback good or bad all advise is welcomed .
Will try to get some photos posted soon .

Sounds like everythings going well now! Good decision going fallow and not getting discouraged but the early losses.

What are you running for filtration in that back of that 32?
OP

Scurvy said:
Sounds like everythings going well now! Good decision going fallow and not getting discouraged but the early losses.

What are you running for filtration in that back of that 32?
Click to expand...

Right now Im using floss change every other day and bag of carbon changed every other water change so I change it twice month .
OP

This is the Way the Tank Started 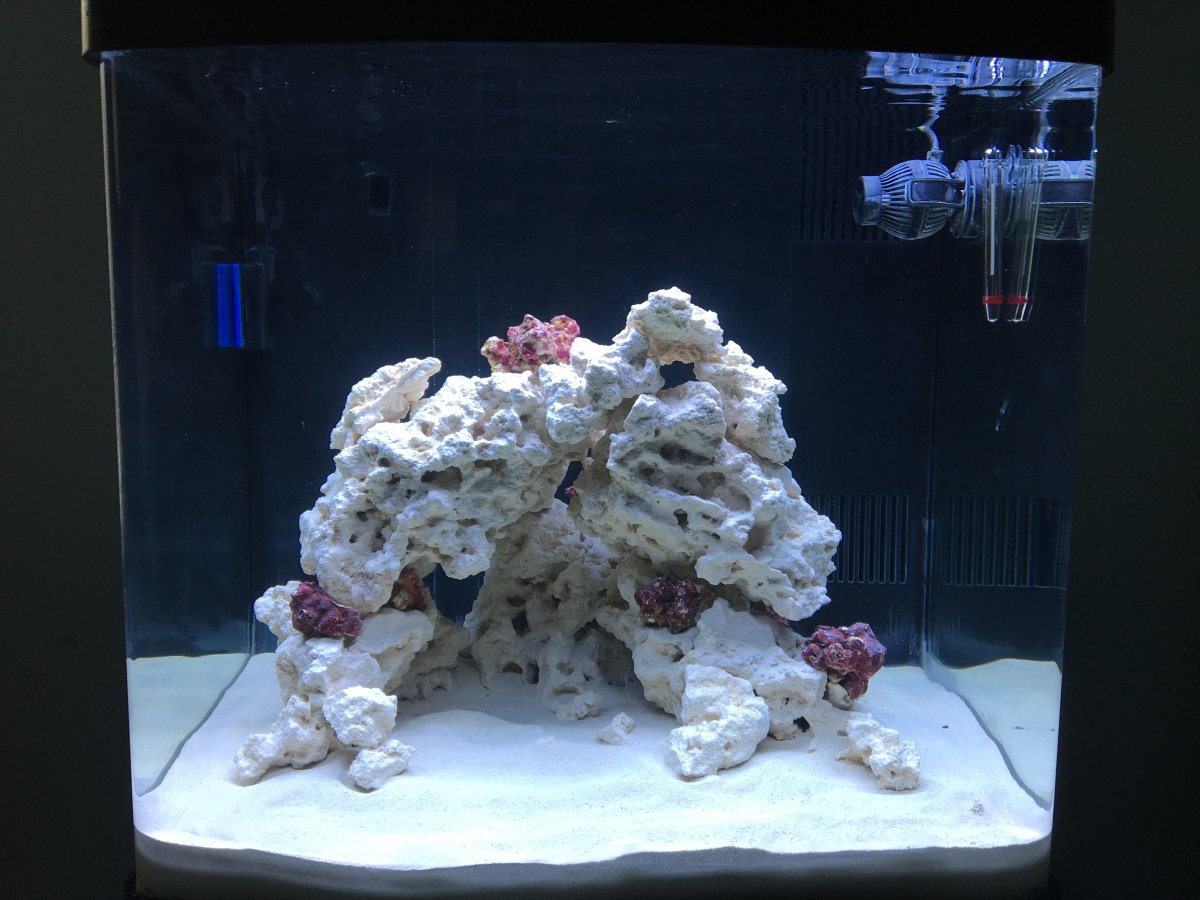 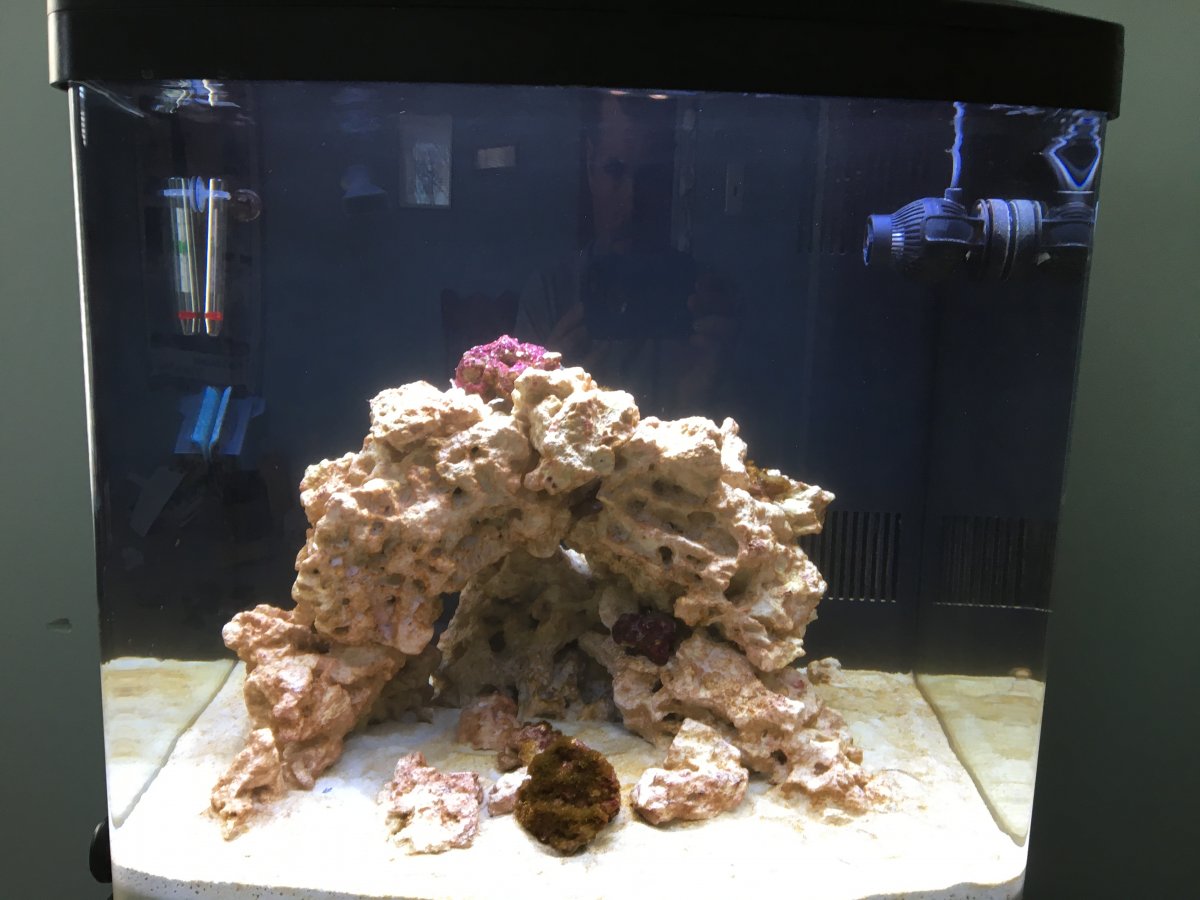 This is how the tank looks like as of this morning. 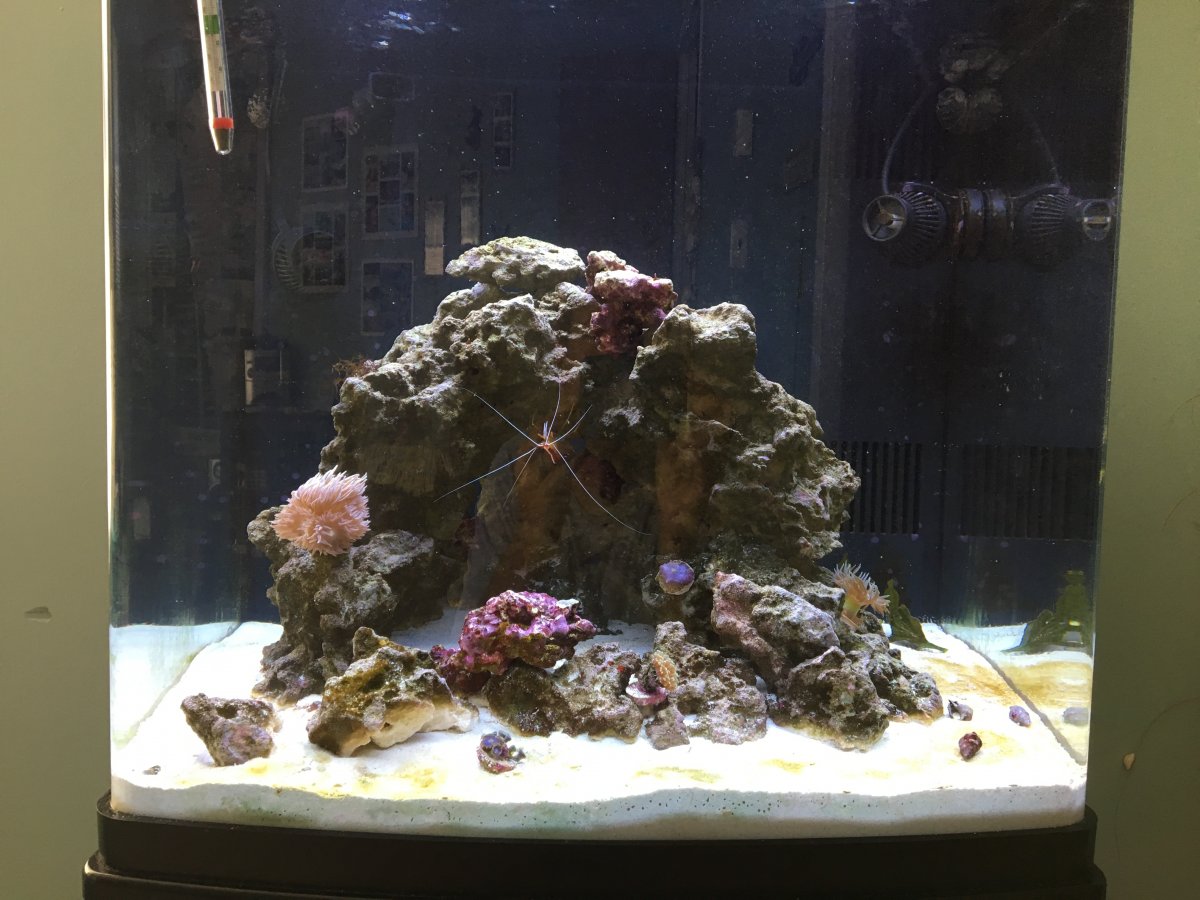 Cool! Similar to the scape in my BC.
OP

I'm hoping this turquoise color stays around and spreads 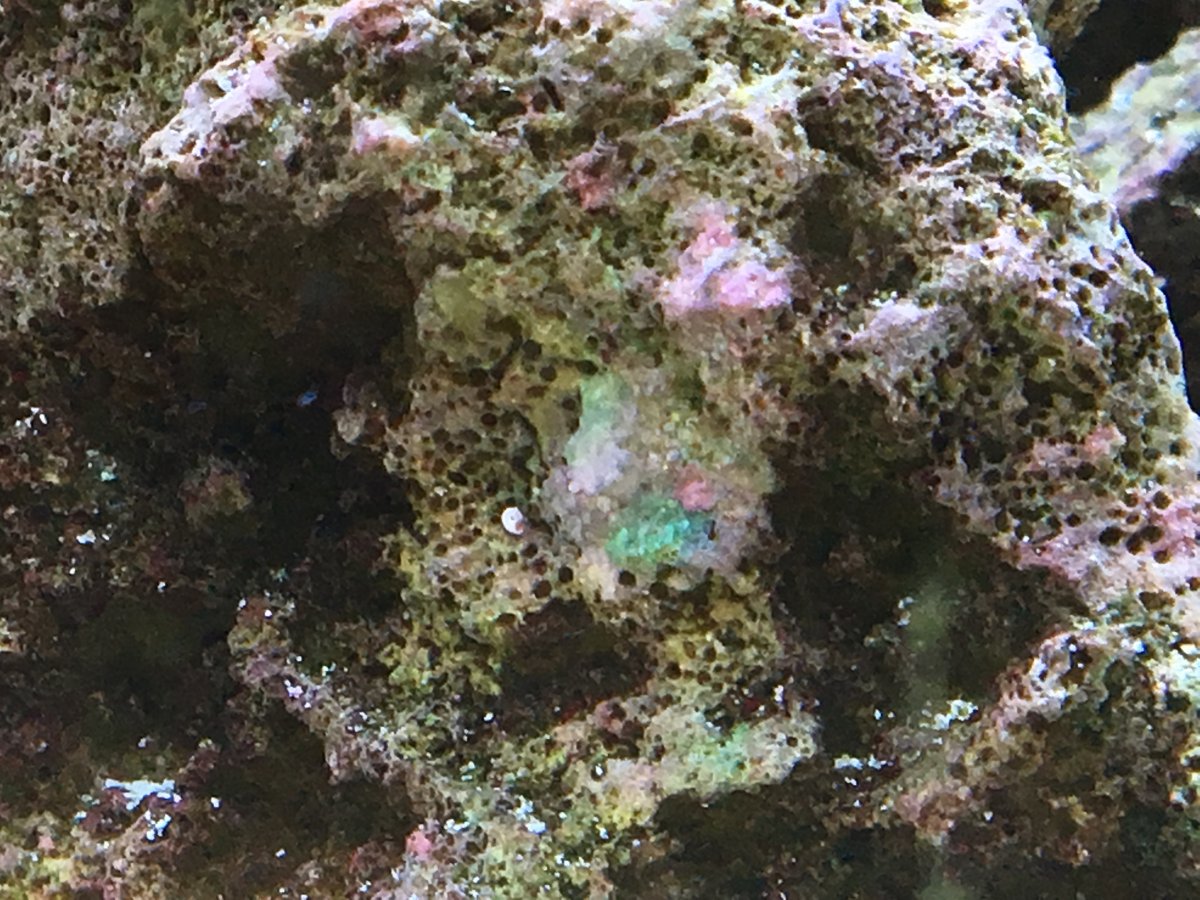 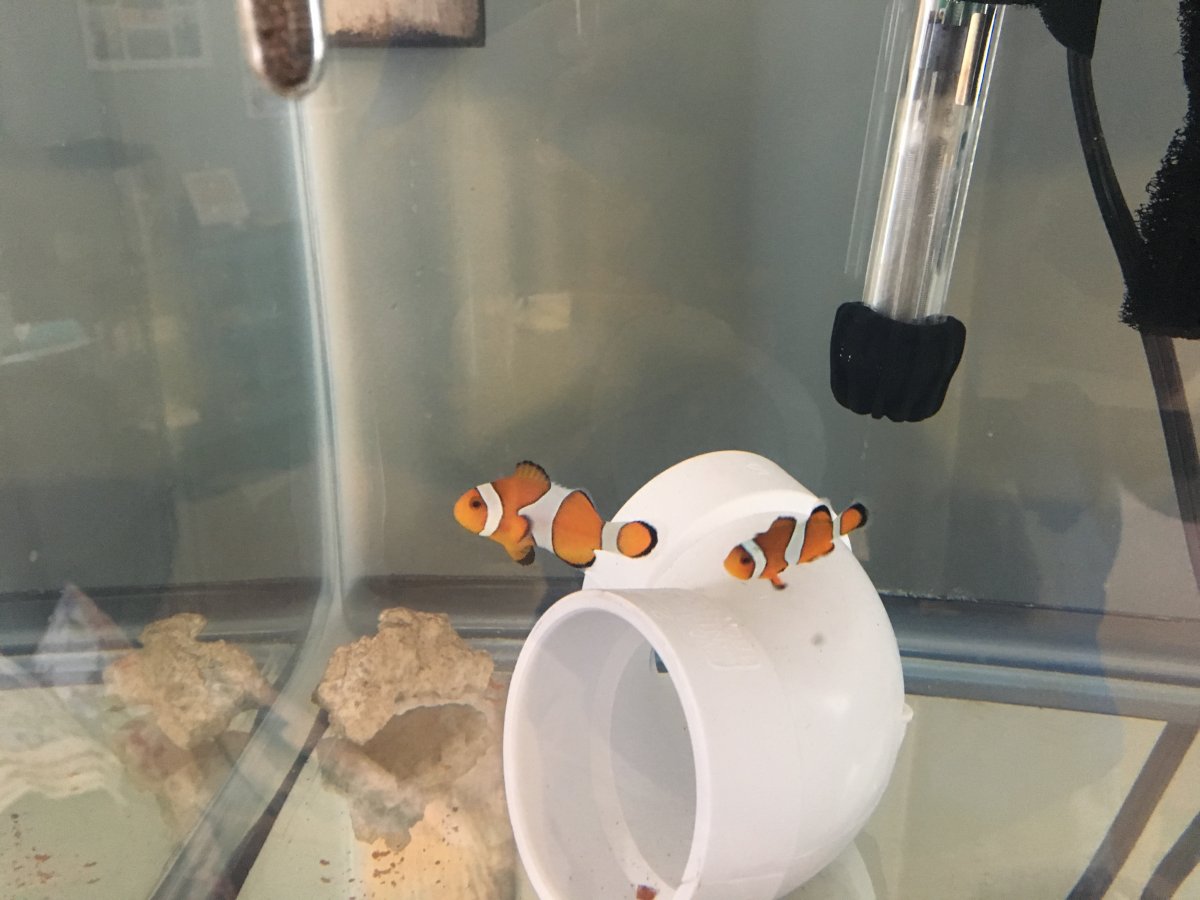 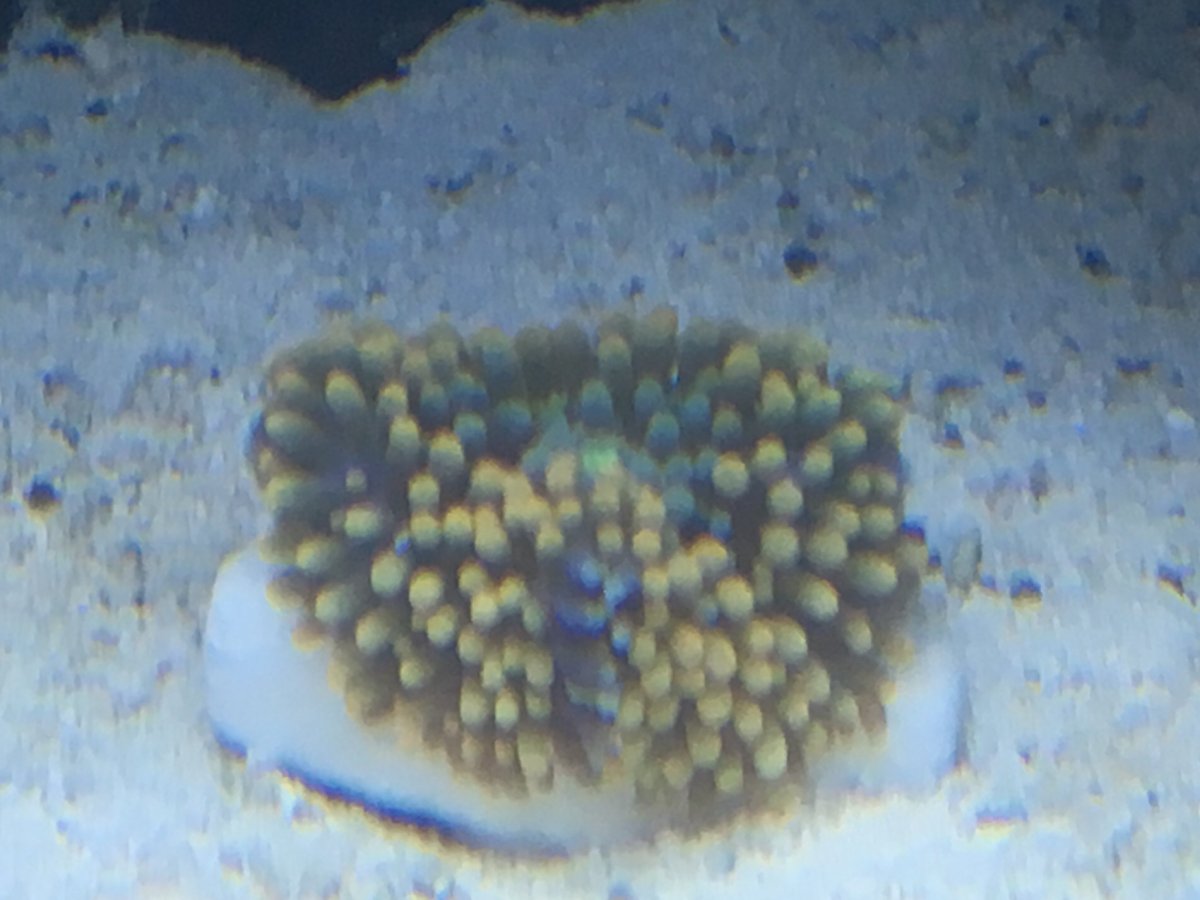 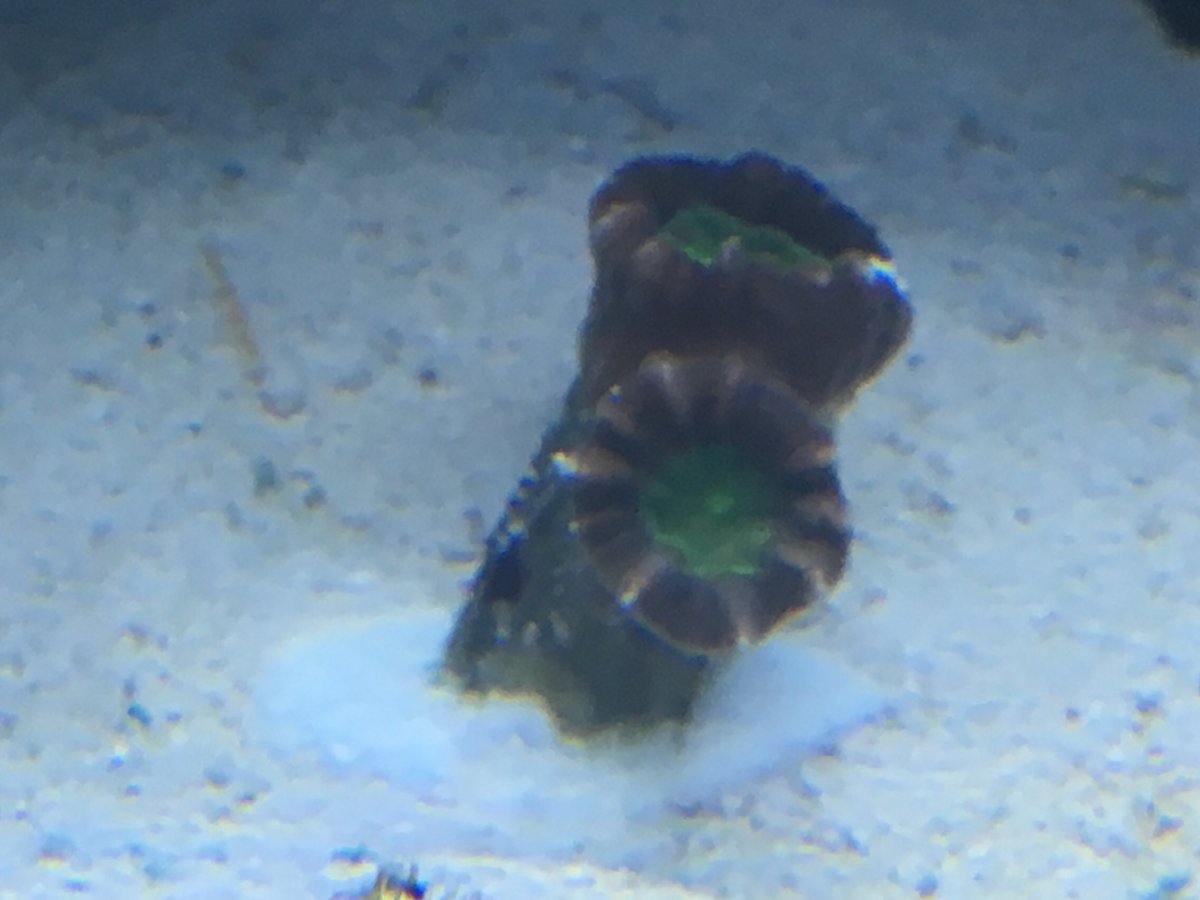 The Springeri is now in the DT and getting along with Firefish .
This morning picked up a pair of clownfish and they are in the Qt for observation they ate a little flake food .I also got a small Florida ricordea and a 2 headed trumpet coral , acclimated and dipped coral rx . Put the coral in lower light and will slowly move to there final location .Next up tank clean tomorrow.
OP

This was not a good week that just passed . Monday 1 of the clowns passed for no reason I could not find any visible issues ,so tested the water salt 1.025 , ammonia 0 ,nitrates 0 ph 8.2 temp 79 . took fish back to LFS as they do have a return policy brought a water sample it tested just as it did at home . They examined the fish and also found no signs of anything replaced the fish .
Acclimated the new little guy put him in the qt swam around all was well both were getting along fine swimming near each other . Skip ahead to friday the bigger clown died again no signs of anything parameters tested fine . Friday is normal water change night so changed the water in both tanks .

My qt tank is a 10 gallon as stated before which started making me think it could have been a oxygen issue I added a air stone . I dont know though as from all Ive read they did not show any signs of low oxygen . With all of this said the remaining clown is doing fine from what I can tell swimming ,eating . My qt I use for observation it has never been treated with any medication .

My plan is as of now wait till next weekend and if all is going fine maybe getting another little clown . If things go bad I'm tearing down qt cleaning it out completely and starting it up again. I know this would start the qt clock on the 1st fish again . Would it be better to add this clown to the tank after observation period then get a new littler clown ?

Im looking for some feedback on this .

Did you have anything for water movement - filter, powerhead - in the QT prior to adding the air stone?
OP

CindyKz said:
Did you have anything for water movement - filter, powerhead - in the QT prior to adding the air stone?
Click to expand...

Yes has a hob filter. I could probably also get a small powerhead
OP

I ended up putting in a Hydor K 240 power head on Tuesday and kept the air stone going as well (I really starting to think it was not a oxygen issue ). Yesterday went and got another small clownfish they are both about the same size . Acclimated and there was some chasing going on for about 5 to 10 min then they seem cool with each other . Swimming near each other at times then separate both eating fine and seems like no issues . time will tell and the qt clock reset .

So the clowns have been added to the Dt . All is going okay no aggression from the other fish a little this is my area so move attitude (mostly the Springeri) . Hoping they will find and host in the Duncan Coral but that's up to them . Updated picture . I will be taking down the QT tank in a couple of days just want to keep going for a few days just in case a issue arises . Going to hold off on adding any more livestock for a bit (Coral, or additions to the CUC) .
Want to let the tank settle in more also have a little hair algae I want to work on 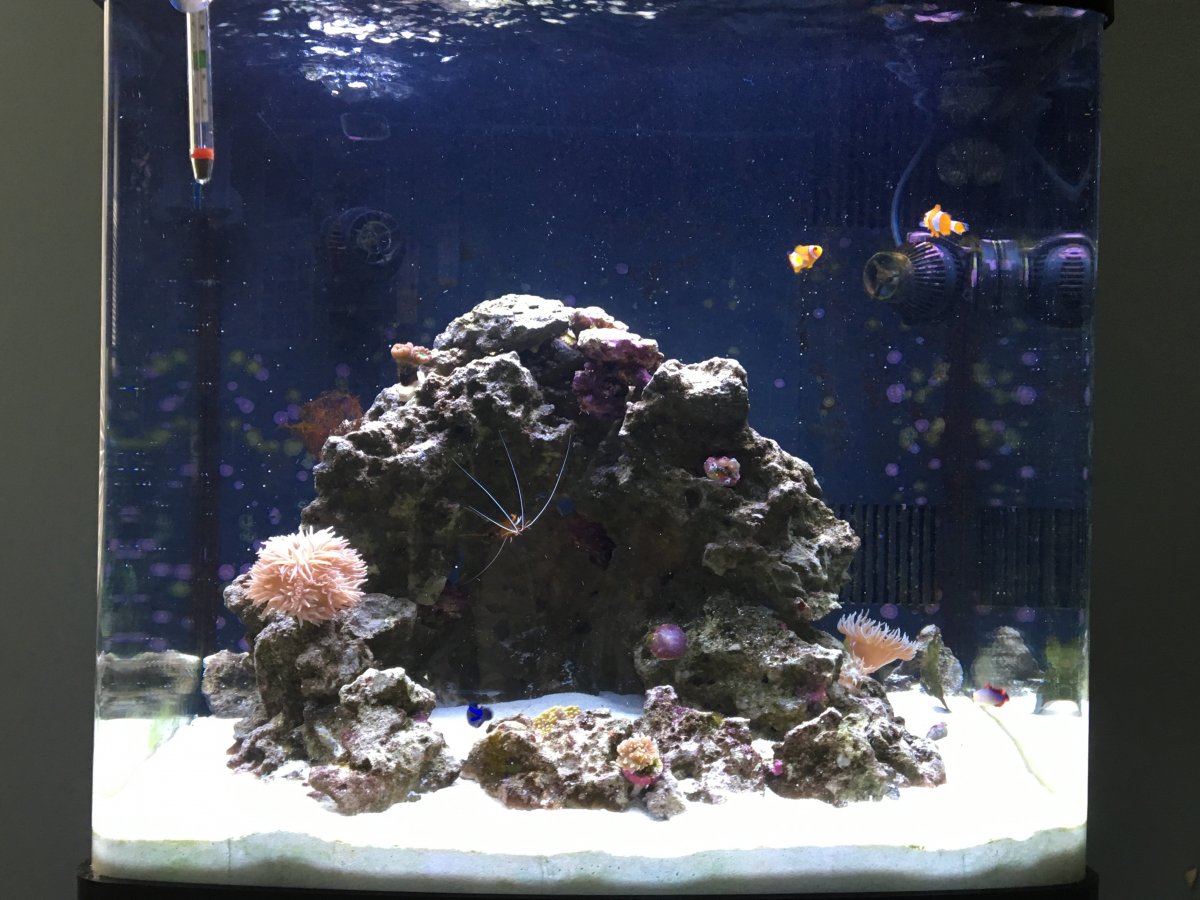 Chances are they won't host in the Duncan. It's possible but not likely. If they do it'll probably stay closed most of the time. I definitely like your rock scape and it seems the shrimp does too.
OP

Thanks about the rock scape and yes the shrimp does like it . With the clowns I kinda figured they would not and I have seen pics online with clowns in duncan's open with clowns in them .
OP

A Little update all is going well the fish are getting along ,corals growing nicely . Still dealing with GHA but slowly taking care of . Im also still holding off on adding anything else till maybe next month .
OP

Well my firefish died while was away on an overnight trip which is a bummer . All was fine when I left no signs of sickness eating and doing its normal swimiming around tank . The other fish seem to be acting fine no signs of any issues . Now I have to figure if I want to get a new fish now or hold off for a bit . Looking for suggestions for the future Have 2 clowns and 1 springer pseudochromis.