Help! I recently got this coral and after a few says the base has started to turn transparent and it has gotten progressively worse over a few days. Its a newer tank. Also if anyone can identify it for me that would be great, for the life of me i cant remember what its called. 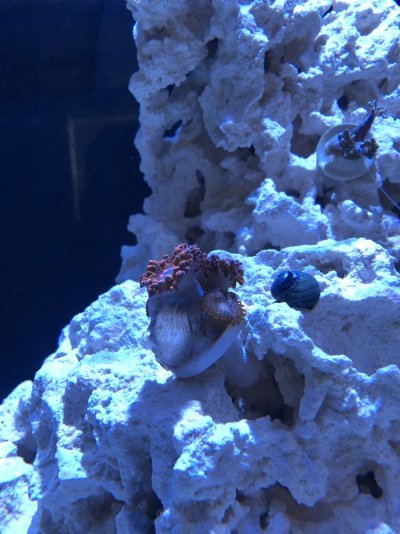 I see a Zoa and possibly a Duncan(?). What I definitely see is a tank that is WAY too new for any corals, or CUC.
OP

Definitely not a Duncan or a zoa, i have had a test coral that is a Duncan in the tank for about 2-3 weeks and it is doing great, i also have some cloves that are perfectly fine and happy. I tested the water and the perimeters have been consistent.

I've circled the Zoa in the pic for you. 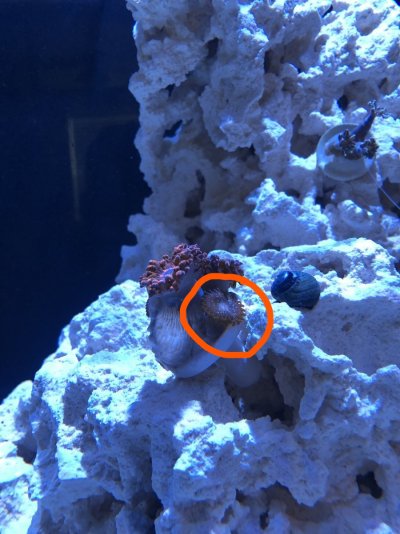 Yea but thats the one in question

I would simply just like to know why the coral is doing this and how i can fix the issue.

I'm a newb so can't help with your specific questions. But I know everyone is going to ask what your parameters are. You say you've tested, can you share the details? How old is the tank?

Gedxin said:
I'm a newb so can't help with your specific questions. But I know everyone is going to ask what your parameters are. You say you've tested, can you share the details? How old is the tank?
Click to expand...

Im also a newb, the tank has been going for about 3 1/2 months, i started it with media from an established tank. 1 month with no livestock. Fish were in for about 1 month before I added the test coral. Then 2-3 weeks later I added the new corals. I have been testing at least once a week and the test results havent changed much. I have also been dosing 3ml of Tropic Marin All for reef every day along with 5ml of Aquavirto fuel once a week. I am going to pick up some live rock from a friend to put in the tank since it is still pretty new.
salinity 1.028
Calcium 430
Alk 142ppm
Ph 8.0
Ammonia 0
Nitrite 0
Nitrate 1
Phosphate 0

Increase Nitrates and Phosphates. With such a new, and small tank, you shouldn't need to dose All for Reef. Waterchanges should be handling everything.