I figured sharing my tank build with the group would be a good way to introduce myself to those who I'm sure I will rely on for advice in the coming months.

Backstory, I have been an aquarist and reptile keeper for over 40 years, along with a dive instructor, surfer, etc., etc. To say the least, I love this stuff. So when my 11 year old daughter took an interest in snakes, I knew it was time to get her involved. As such, we've created our own Youtube channel to help inspire other daddy-daughter duos to enjoy this hobby together, while teaching her the science that makes this awesome hobby work. I get to go all-in with my hobby, and my daughter gains a better understanding of science, how to run a organization/marketing/social media, and a new life-long passion for cool glass boxes. It's a win-win. So far we keep two dart frogs in a bioactive vivarium, cats, these aquariums, and a ball python.

The concept of our current build is to do twin aquarium, side by side, one a Amazon biotype (ish) and the other a mixed reef. We started by building a custom stand that's 6' x 18" and sits 40" high (because commercial stands are WAY too short!). This will hold the twin 40 gallon breeder tanks, but can also hold a 125 or 150 in the future. 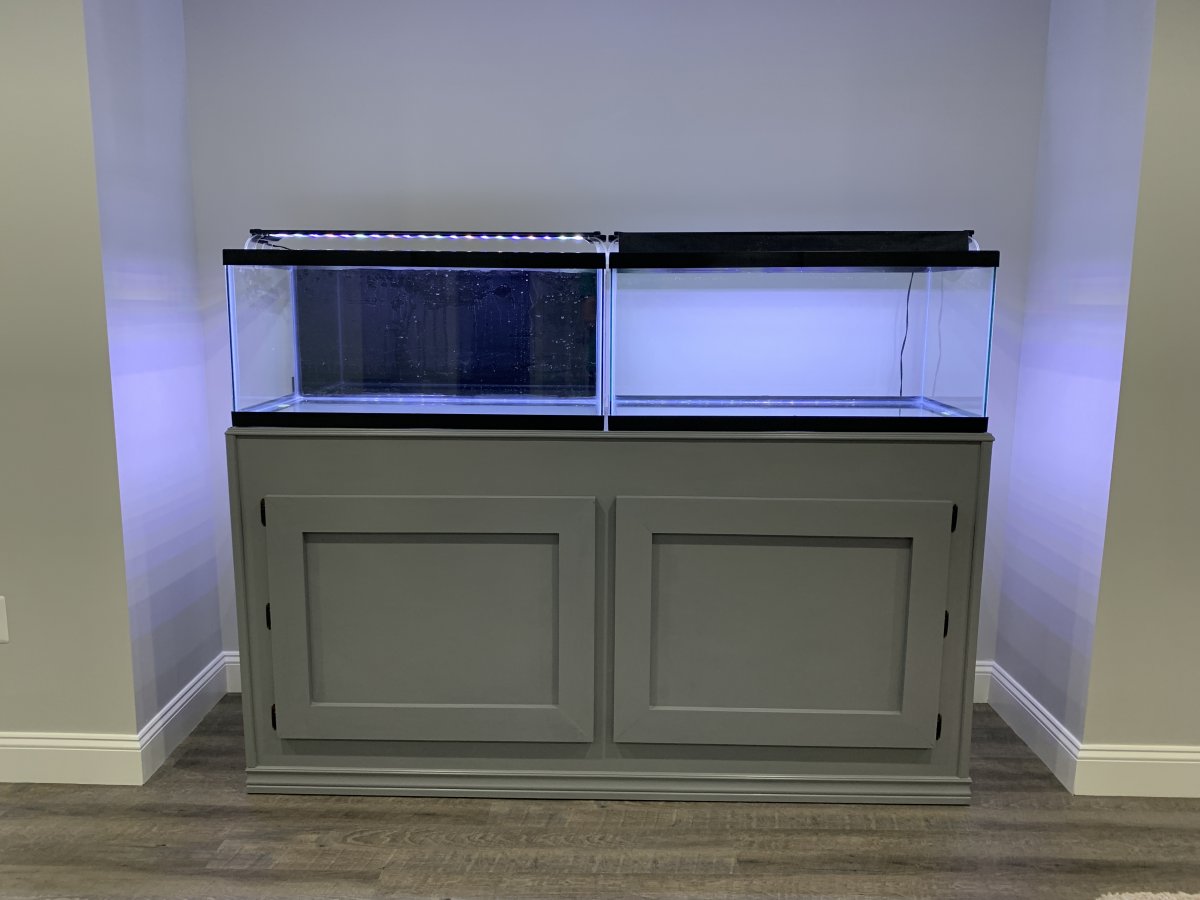 The freshwater part of this build is loosely inspired by the Amazon tributaries (albeit, mostly with the fish), with a mix of wood hardscape and plants (which admittedly, come from all over the world). This is a mid-tech build with pool sand, lost cost LED lighting and for now, root tabs and DIY CO2. The CO2 is "controlled" by having the bottles sit in a bath of water, which is heated 4 hours before lights-on, and is allowed to cool again 4 hours before lights off. The ramping and slowing of the yeast's metabolism does a good job in maintaining a steady CO2 level of about 20 ppm 24 hours a day. I can increase or decrease the CO2 levels by adjusting the concentration of sugar and yeast in the bottles. I run two gallon sized bottles of mix, each being changed once a week, one on Saturdays and one on Wednesdays. Right now, we've got cardinals, glowlights, embers, ottos, bristlenosed plecos, and loads of cherry shrimp. A lot more growing for the sparse plants in there now. 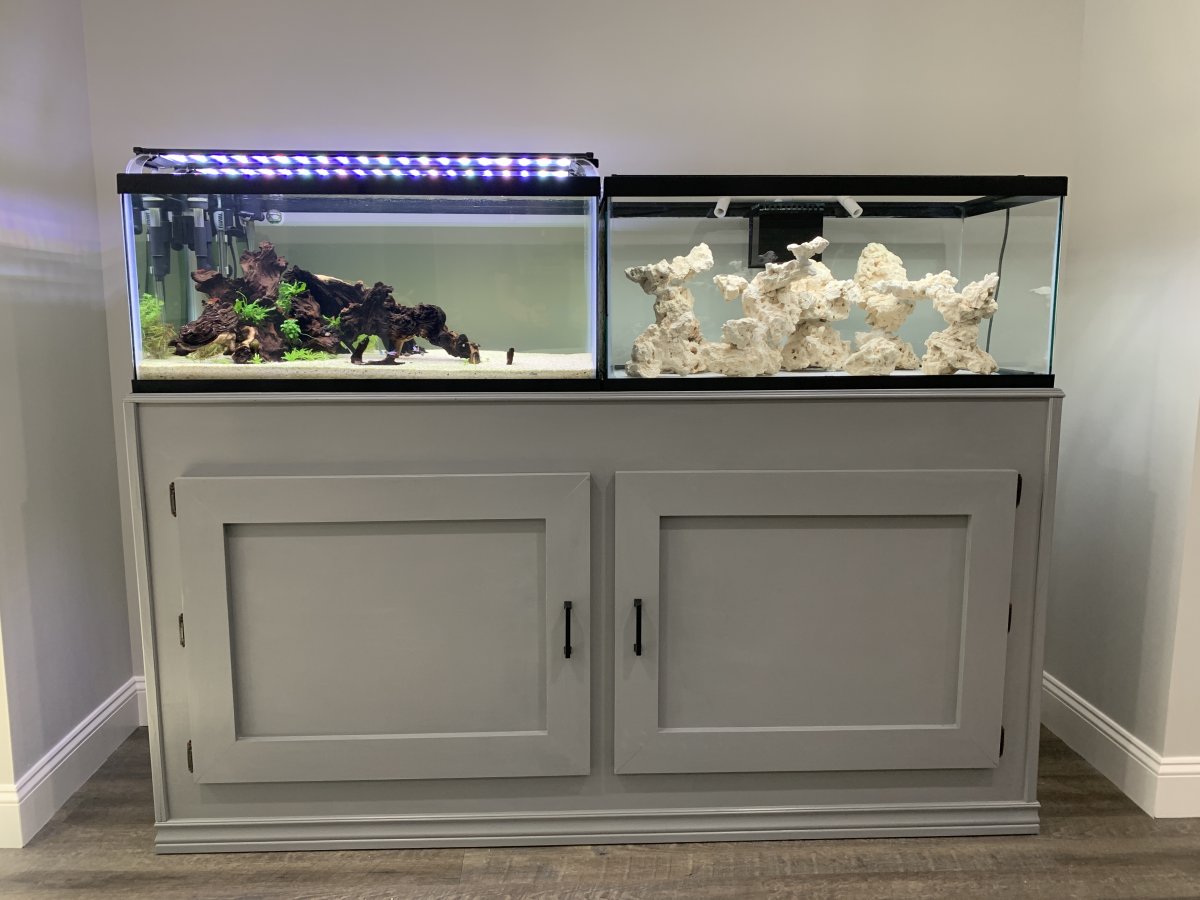 The reef is cycling, however it's got a modest sand bed of about 1.5", about 40 pounds of dry rock which was smashed, and reconstructed into something that resembles a reef. We drilled the tank in the back, and I'm running an internal box, herbie overflow. I have a pond-master 1200 pump I inherited, and it's (I'm guessing), putting about 300 gph through the overflow. I control the flow by allowing a portion of the pump output, to be routed right back to the sump which we custom build out of a 20 long, so I have another 200-300 GPH that can be routed to a reactor in the future. 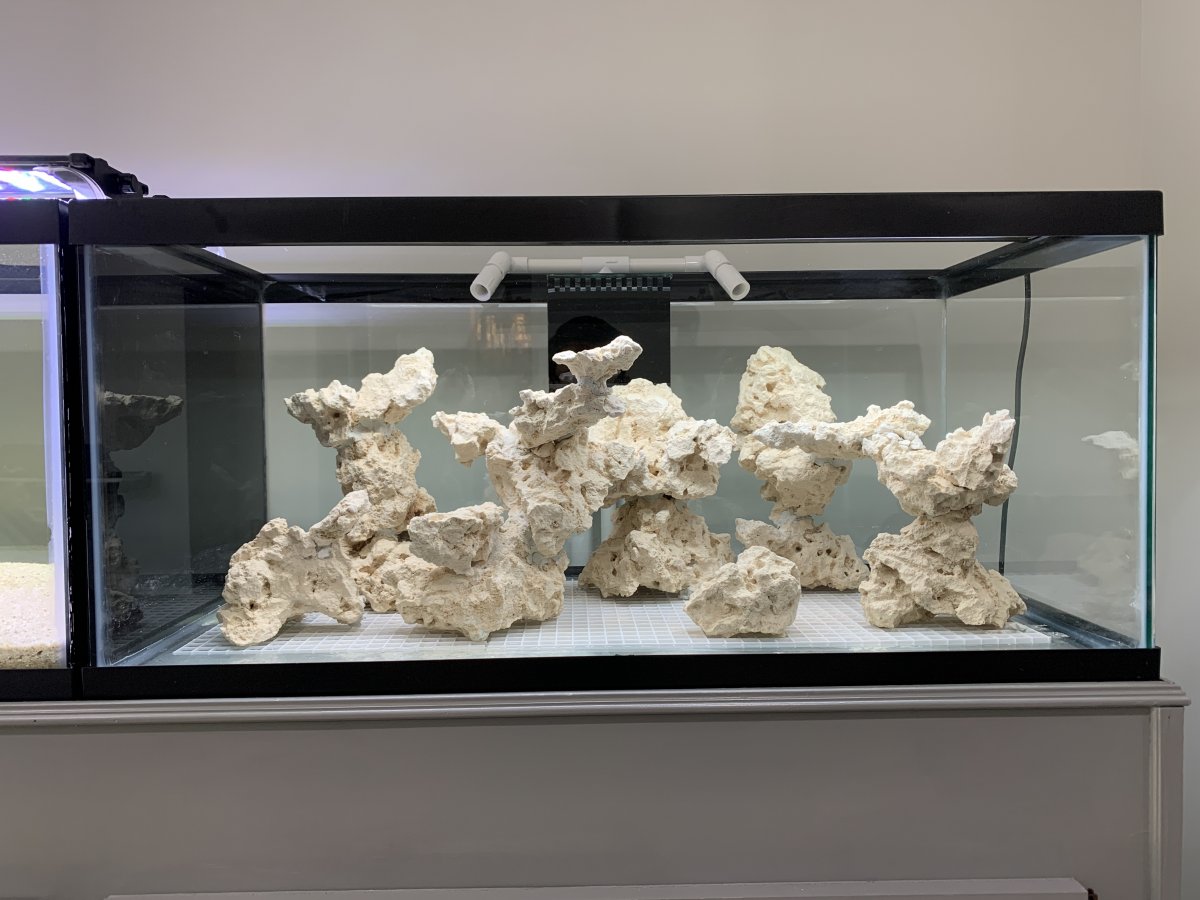 The lights are still up for debate, but one of the lessons I want to teach my daughter is how to build things herself, so a somewhat DIY, or at least "low-cost with some ingenuity" solution is the way we'll go. When things get good and dirty, we will populate the refugium and at some point, I will show her how to build an ATO, and other components for future projects/posts/videos. The best part is the rad backlighting we installed. 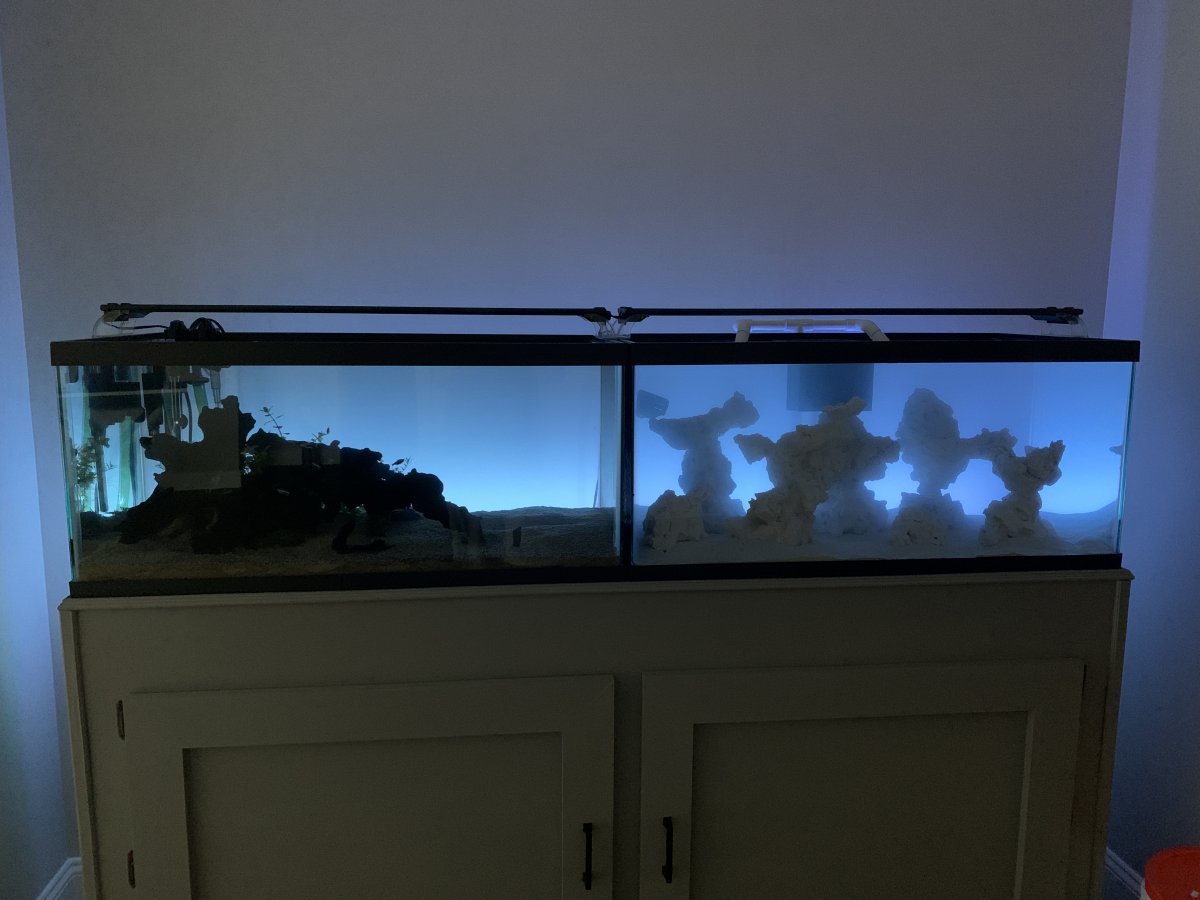 Anyway, we're planning on populating the reef with a clown (dad wants a Clarkii and she wants Nemo), a royal gramma, and perhaps a blenny or goby or two. All TBD. She likes the way softies and LPS moves, and I like the lower cost and ease, so that's the ticket for us.

To that point, can someone direct me to the rules regarding YouTube links? I want to be sure I’m on the up and up. Any stocking suggestions would be great too!
OP

Since I can’t leave well enough alone, I rescaped the tank and went with a two islands style. I like that it adds a lot more horizontal space for corals. We started the cycle about 9 days ago with ammonia and Fritz 9, and while it processed the ammonia quickly, it’s been stuck with nitrites at 250 for the past 5 days with no movement at all. We dumped some Dr Tim’s in there to give it a kick. My daughter and I can’t wait to get some fish in there! 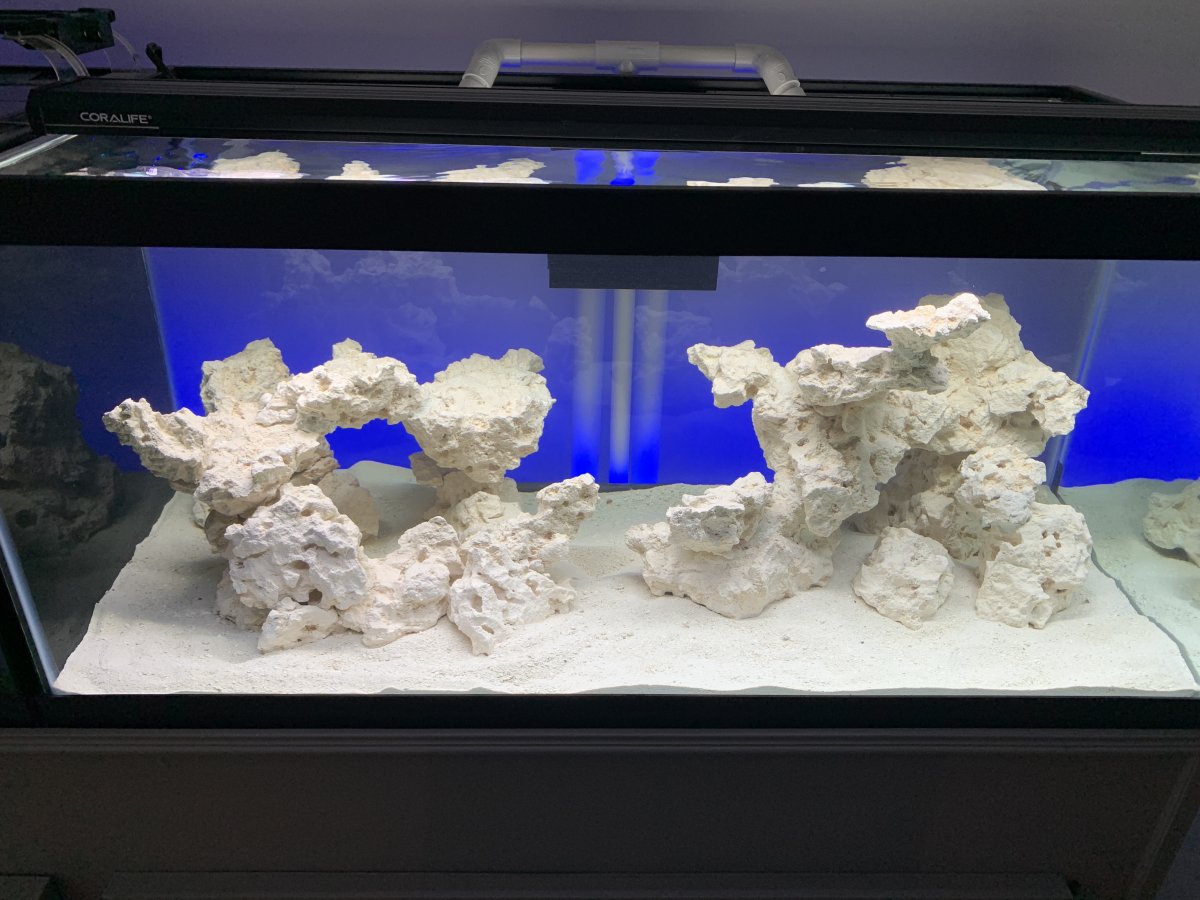 Here’s another update. Reef is cycled and the freshwater is doing well and growing in. The reef got a Yellow Watchman Goby, and a couple of tiny frags last weekend (GSP and Duncan) and all seem to be doing really well. We also put on the Current USA IC Pro lights and I’m really impressed so far. Being only a 40 breeder with plenty of coral spots within 8” of the surface, I’d venture to say that I’ll be able to pull off a nice mixed reef with those lights. The thunderstorms are cool but useless, but the spectrum seems adequate, the adjustability is impressive and I LOVE the low profile. No light spill!!!! Cheap too. 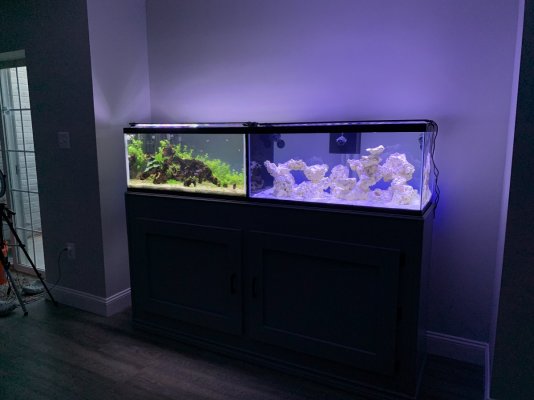 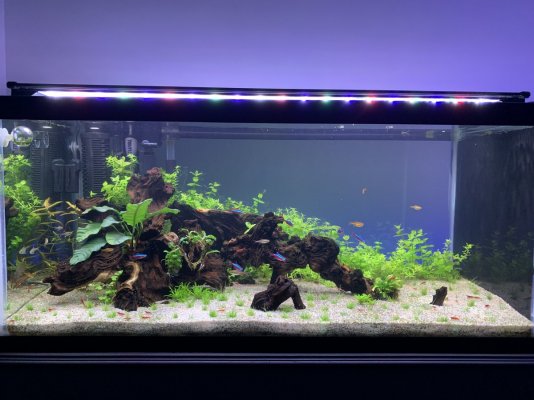 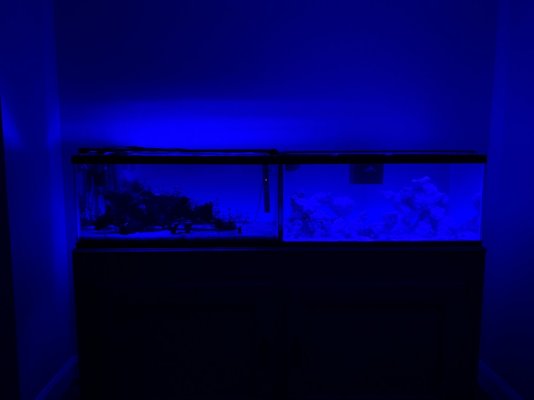 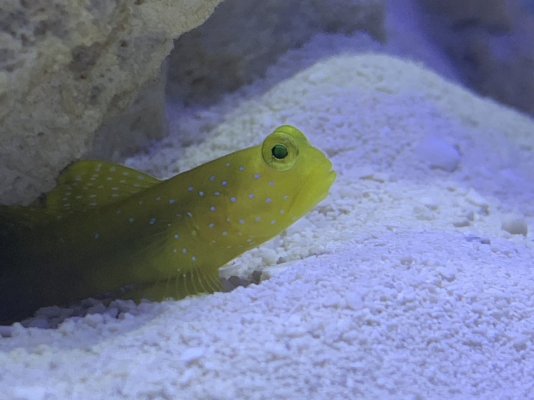 Let me know if this is contraband, but here is a link to the videos of my daughter and I doing the aquarium build. So much fun showing her the ropes!!!! 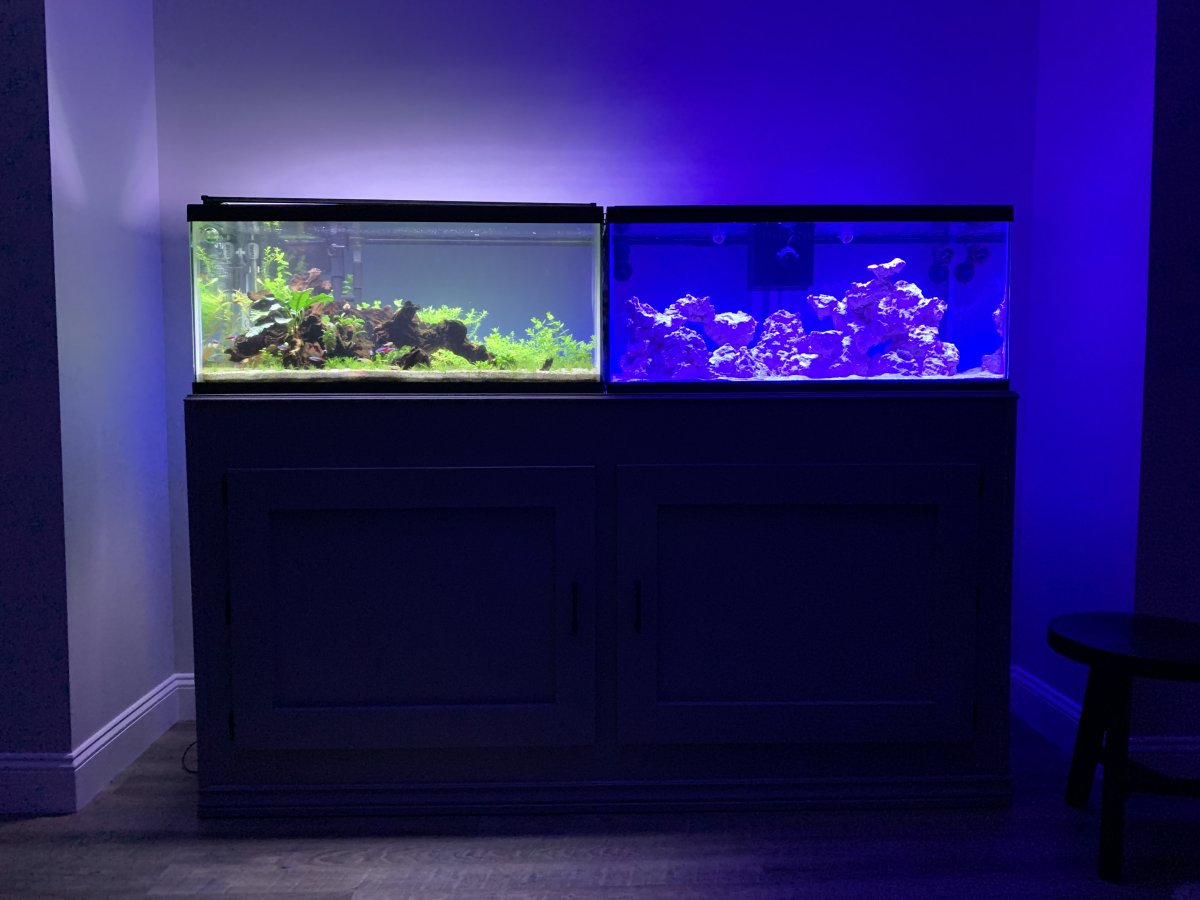 Build Thread Njordr'sSecretReef- Our First Builds and The Journey's We will All Take!