Doing this kinda backwards because the tank is up and running but I figured I'd still share the process.
Back in August I won the give away for the IM AIO 50 Lagoon. Crazy thing (besides winning) was I just bought a used IM 25 Lagoon and was a week away from starting the cycle. 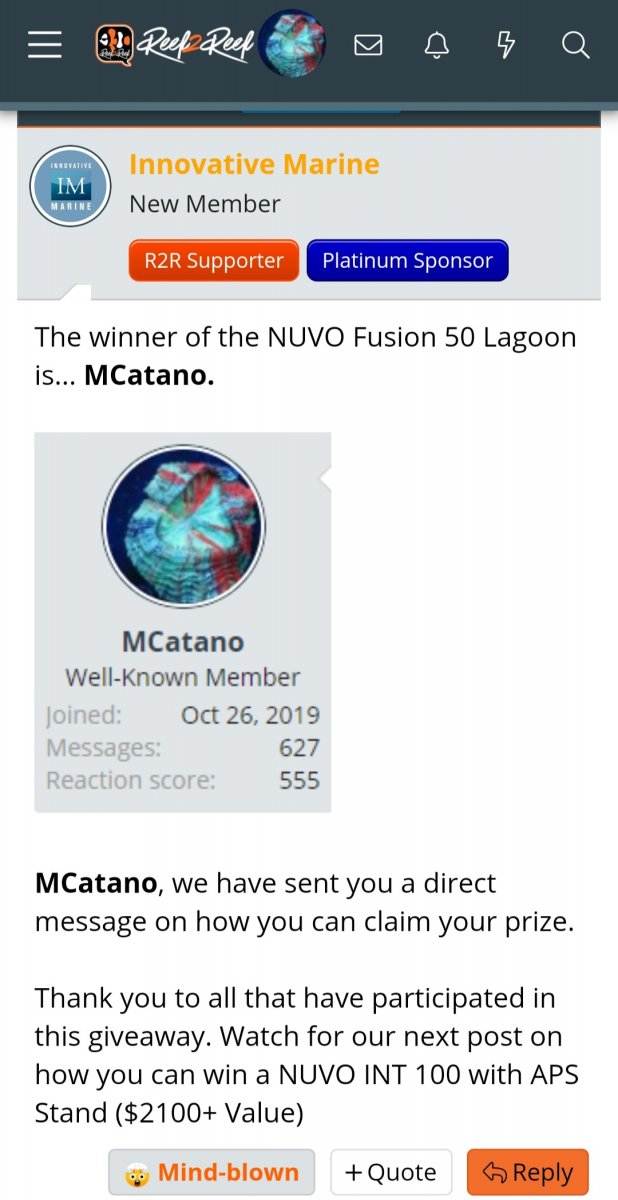 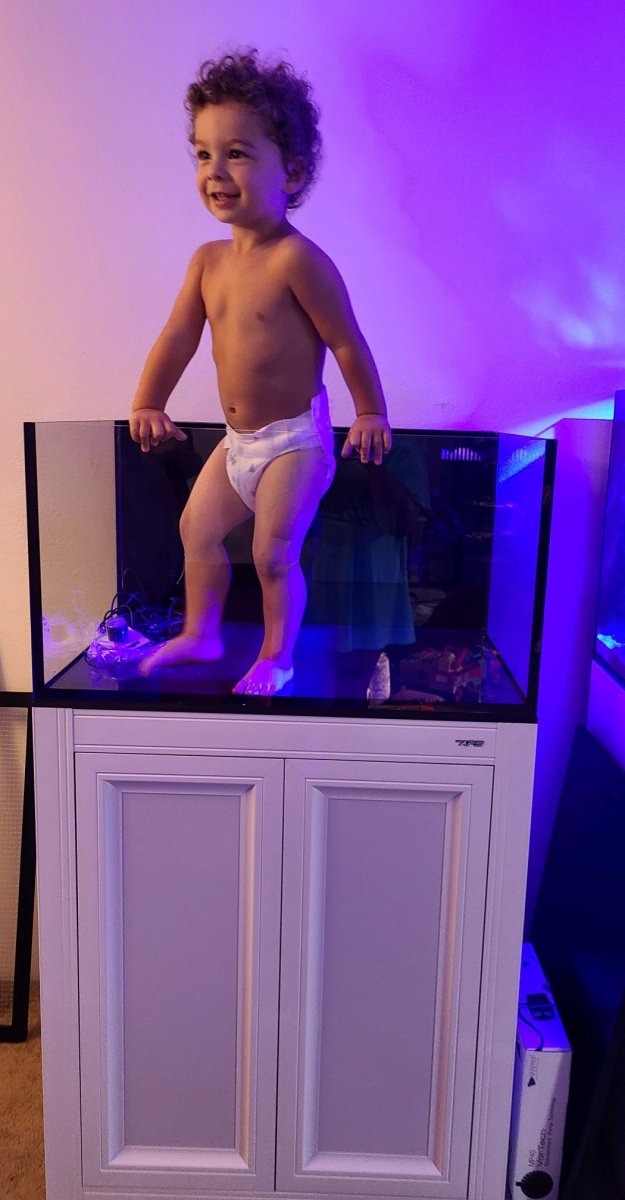 Equipment:
(1st compartment on each side)
1st idea was skimmer on one side and caddy with filter floss on the other. I wanted the Tunze Skimmer but couldn't find the DC Model. Tried the Icecap but didn't like it. Finally found the Tunze DC 9004 a 2 months.

(3rd/center compartment)
I was contemplating on switching the pumps because of reviews and that's just the thing to do... right? Well, I didn't! I kept the stock pump to give it a try and have not ran into any issues.

Shocker Alert!! I went with 125W Eheim Heater and the fit was nice.

For ATO I was considering Auto aqua smart mini or the Tunze 3152. Found the Smart Mini used from another R2R member and it was like new for a steal.. Winning!!

Lighting: I already have another setup with RedSea lighting and wanted to try something else. The RedSea lights work great but everyone raving about the Radions and Kessil lights made me want to stray. I was torn between the Kessil AP9X or the Gen 5 XR30 Radions. Do to the strong love for the AB+ light setting I got the XR30 Blue. I can say it is louder when the fans turn on compared to my RedSea lighting but not an issue for me personally.

Wavemaker: I love LPS and wanted to see if I could get away with not having extra flow besides the return pump. Thinking the coral will be fine with the low flow. It was fine for a while but now with more livestock in there and a heavier Bio load, I need to do something. Tank and water are getting dirty fast. I am thinking of taking the MP40 off my Reefer 425, replacing it with the RedSea Gyre and using the MP 40 in the Lagoon (on super low of course). Thoughts on this?

Wanted to do minimal rock for a clean look and leave lots of room on the sand. Speaking of sand we went with Caribsea Fiji Pink. About 2" worth. Pics will be attached. We add water. 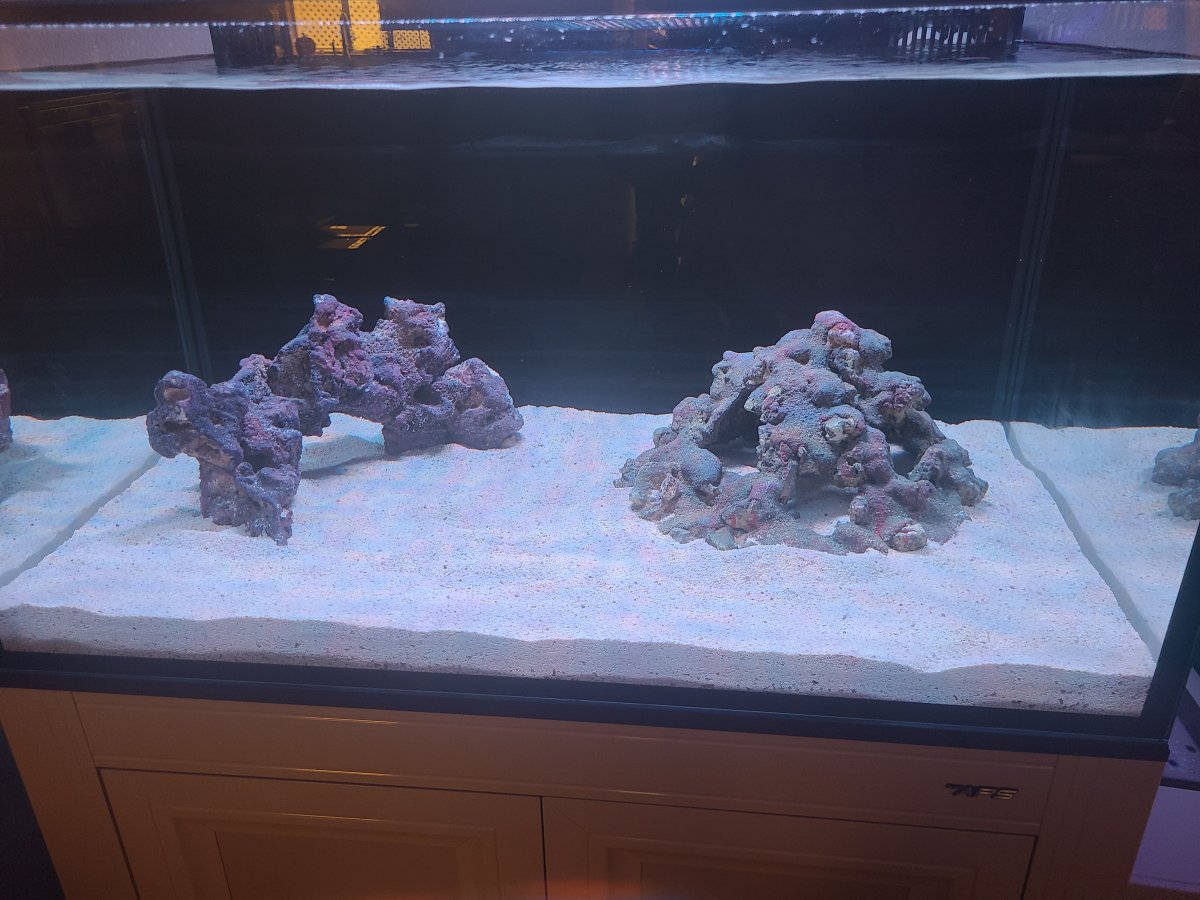 Livestock:
Everything! Just kidding but, I felt like I looked at everything.

1st thoughts were Blue Spotted Jawfish, Helfichi, 3x Blue Stripped Pipefish, fire shrimp, cleaner shrimp, 2x Conchs, red leg hermits and some Trochus snails. Wasn't sure from there. Planned on moving 3 Blastos and a Welso from my other tank.


Listen to this... The Blue Spotted jumped and became a chip on the floor (Insert sad face). Not anything crazy because we all know they jump but, I couldn't figure how he got out since it has a lid!! The lid 100% seals the tank with no way of getting out. Thought about it and only conclusion is that after I fed the tank and walked away he jumped out when the lid was off. Dummy me, didn't see him on the side of the tank, slapped the lid back on and walked away.

A few weeks later the Helfrchi went MIA. Since the "jumper", I was extra careful to replace the lid before looking any other direction lol. So we know it didn't jump. I looked everywhere with no luck (Yes I checked the floor to just in case).

After this 2nd "incident" my wife kicknamed the tank the Suicide Tank. She thought she was hilarious. I decided to let it slide and keep her around.

Since then, I have added a trio of Blotchy Anthias about 1.5" big. Plan on moving them to bigger tank when time is right. Also added 2 Red Rooster Waspfish and 2 Staghorn Crabs.


I am open ears if you have any suggestions. I will add more pics below for those that would like to see. 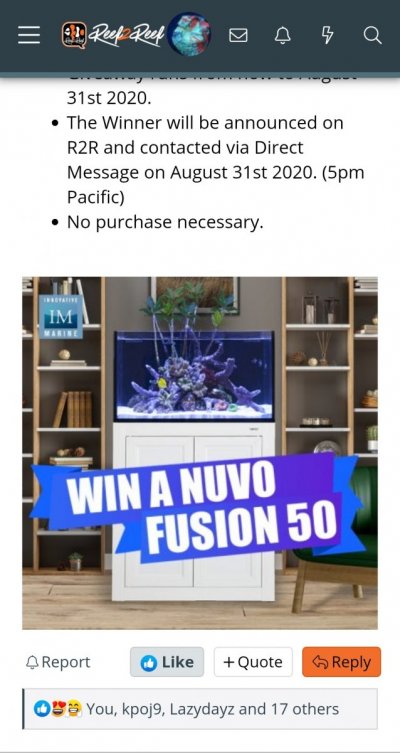 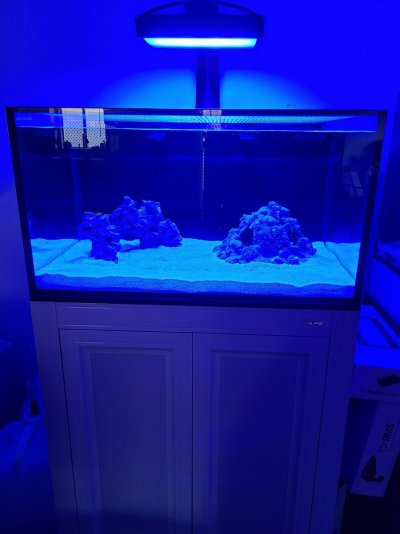 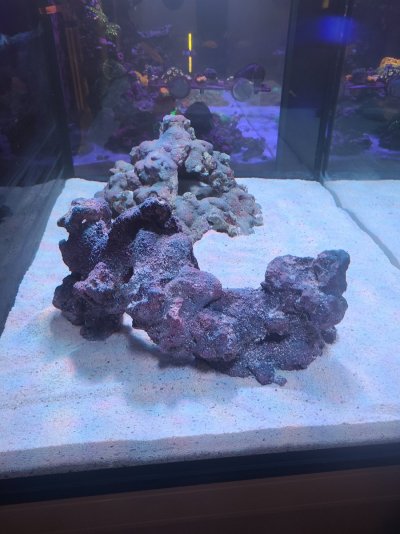 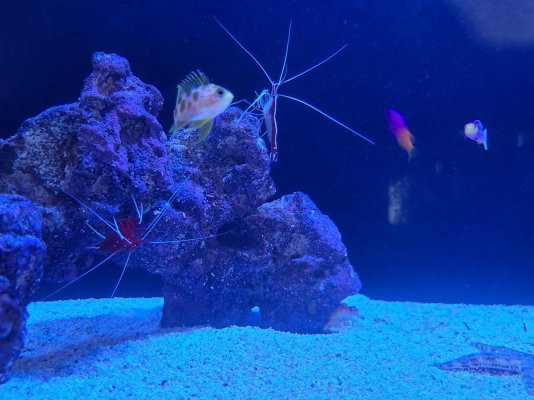 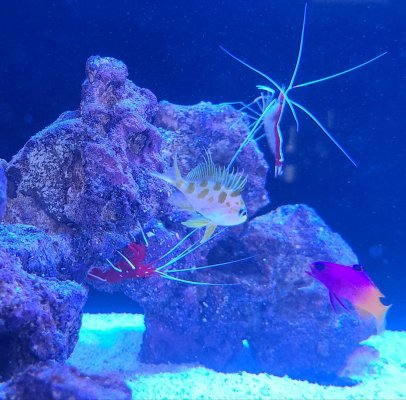 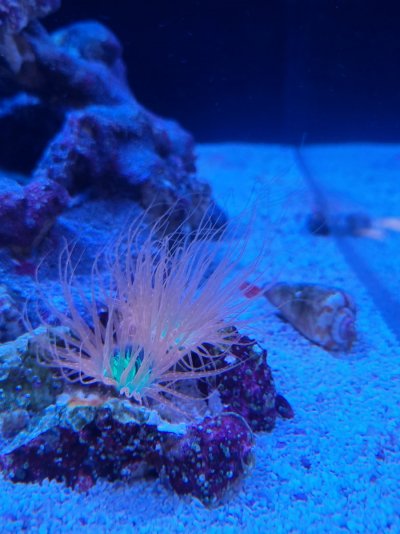 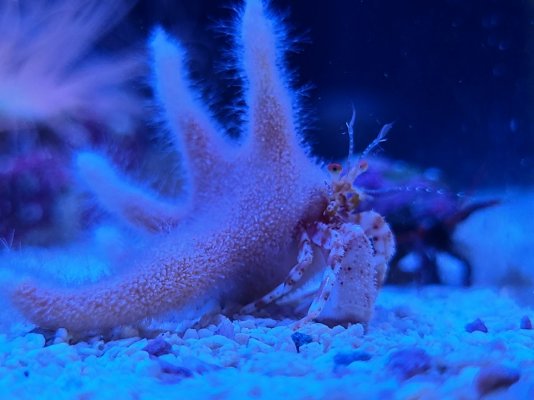 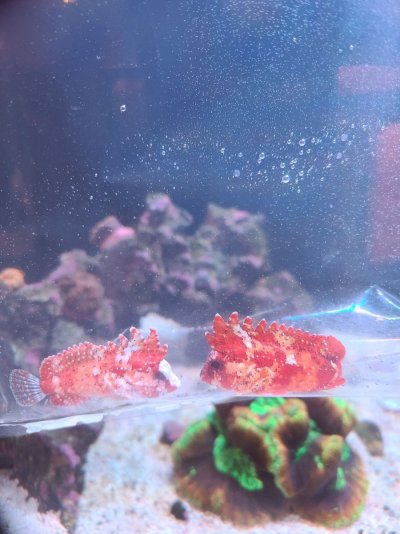 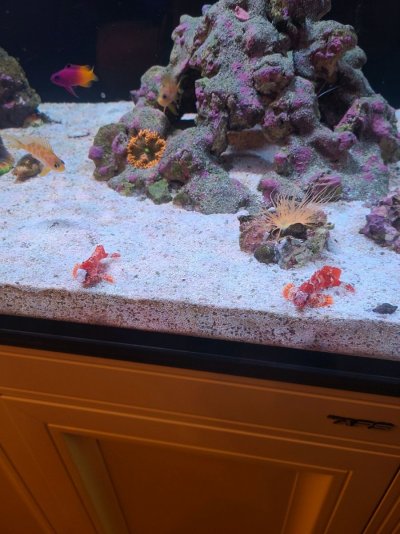 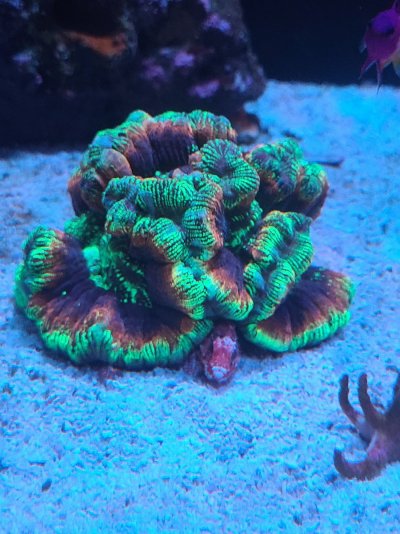 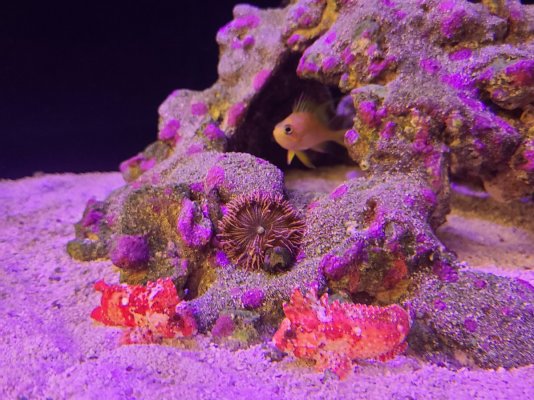 Congrats! Tank looks awesome! The baby pic cracked me up.....looks like a giant baby! The wife loved it too!
OP

HD_Reefer said:
Congrats! Tank looks awesome! The baby pic cracked me up.....looks like a giant baby! The wife loved it too!
Click to expand...

For anyone curious on why I never did a build thread on my RedSea 425 Reefer.. I didn't build it. I bought the display tank from RedSea at Reef-a-palooza 2019 in Anaheim. The tank was fully done by Chris from LAX Aquariums. Maybe you saw it there? 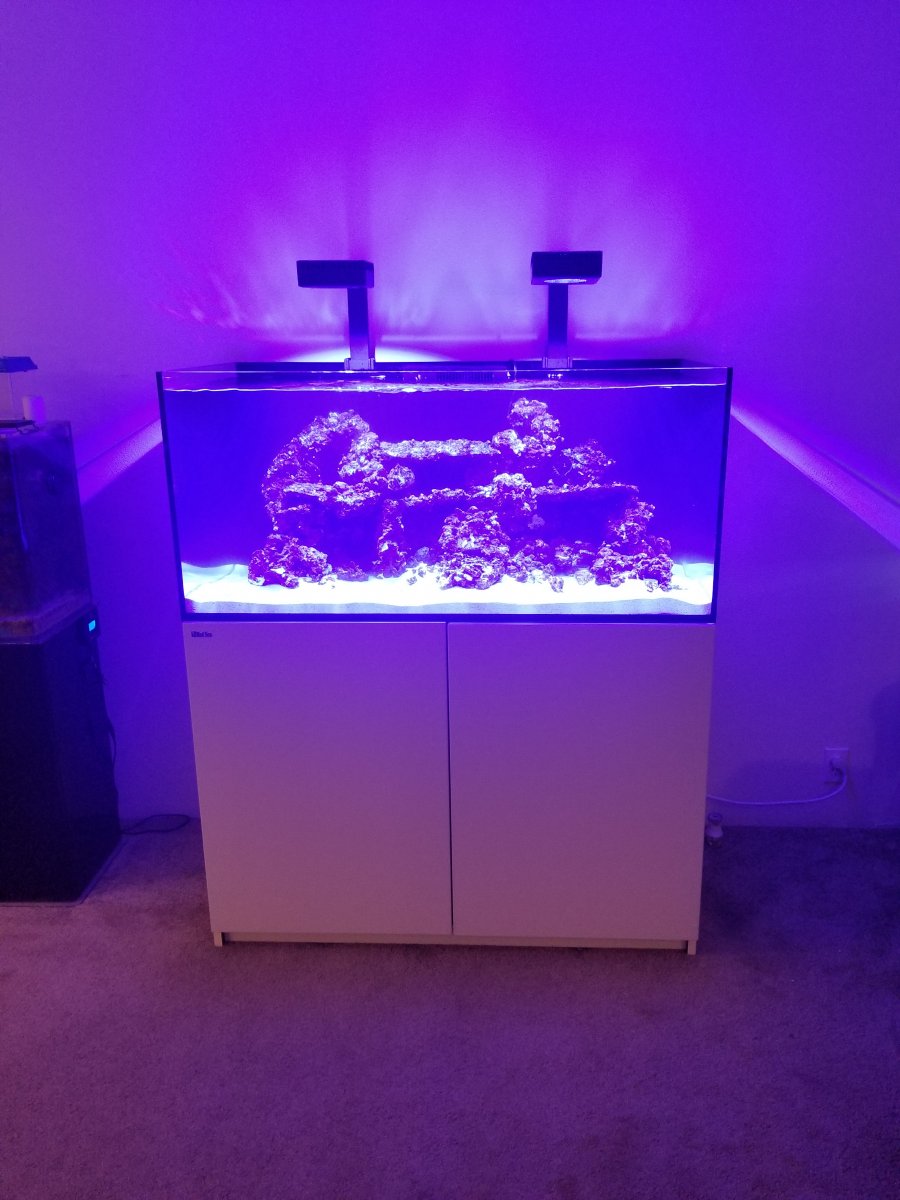