Shipping
Pick Up Only

I am looking to sell my fully quarantined interruptus angelfish. I believe it has turned to a male by now since it’s been without its mate for some time now. I have had it since February of 2019. Bought it as a juvenile (about the size of a quarter) to pair with the male I had. Unfortunately, a year later I lost the male due to a freak accident. He jumped and hit my screen so hard he flipped it and I found him on the floor the next day. Now that he is older he is becoming aggressive to my other angels . So after much deliberation I am looking to rehome him and keep the other angels. The price I am asking is what I paid for it $2200, and that was not quarantined. And it is fully quarantined now using humblefish method. At this time I am not comfortable shipping this fish so pick up only please. 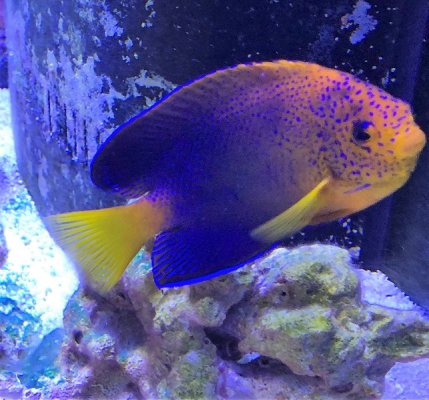 This thread is for the general discussion of the classified ad Interruptus Angelfish. For more information about this item, please click the link or ask a question in this thread.

Please add to the discussion here.

Beautiful fish, hope you are able to find him a good home!

Free bump for a gorgeous fish!