First post on this forum, and a new reefer myself.

Its been a good learning curve, only about 3 months into this tank and saltwater so I am being patient and trying not to make any mistakes that will bite me later.
I started with dry rock and Dr. Tim's ammonia to cycle, added a few pieces of coral and pods, and i'm amazed at the variety of life in this little while.

History with me is I've kept 100+ Gallon freshwater and high-tech planted tanks in the past, so why not try something completely different. I like the challenge and idea of learning new things.
I initially had planned on a 30x30x15 rimless planted shrimp tank, since I had the CO2 tank and reg already. That's on the bench for the future at this point.

I discovered the Red Sea tanks while I was searching for cubes and liked the rimless and beveled edges, and the fact that it comes with a herbie style drain.
The stand is also nice, clean look and surprisingly good quality considering it has to ship flat.
It also fits perfectly in my office.
I have to say the tank as it's configured now is nearly silent. For comparison, I can hear the tiny aquaclear filter on my QT tank over this cube tank.

Pro's for this hobby to me
-Calming
-Educational for my kids
-Suits my lifestyle, compared to say a Dog.

Tank seems empty, but i'm more growing a tank than I am into having an instant tank in 6 months or a year. I will add new corals as I learn about them.
Frags seem a little easier to control hitchhikers than say a big colony would be. Just my opinion.

Onto the livestock and gear. Photos with comments at the end.


Gravity feed from RODI water on top into the bottom.
Bottom tank has the heater and maxijet keeping the saltwater ready.
1/4" Bulkheads in the tanks
Rim under the cap was cut slightly to make room for the two power cords in saltwater tank.
Stand is 1/2" plywood, glued with titebond and pin nailed, hasn't buckled yet.
Double layer top, top layer is cut out so the tank sets recessed slightly.
No fancy plumbing here, but I did add a union.
Tanks are HDPE and needed a bit of silicone in the bulkhead fitting to seal properly. 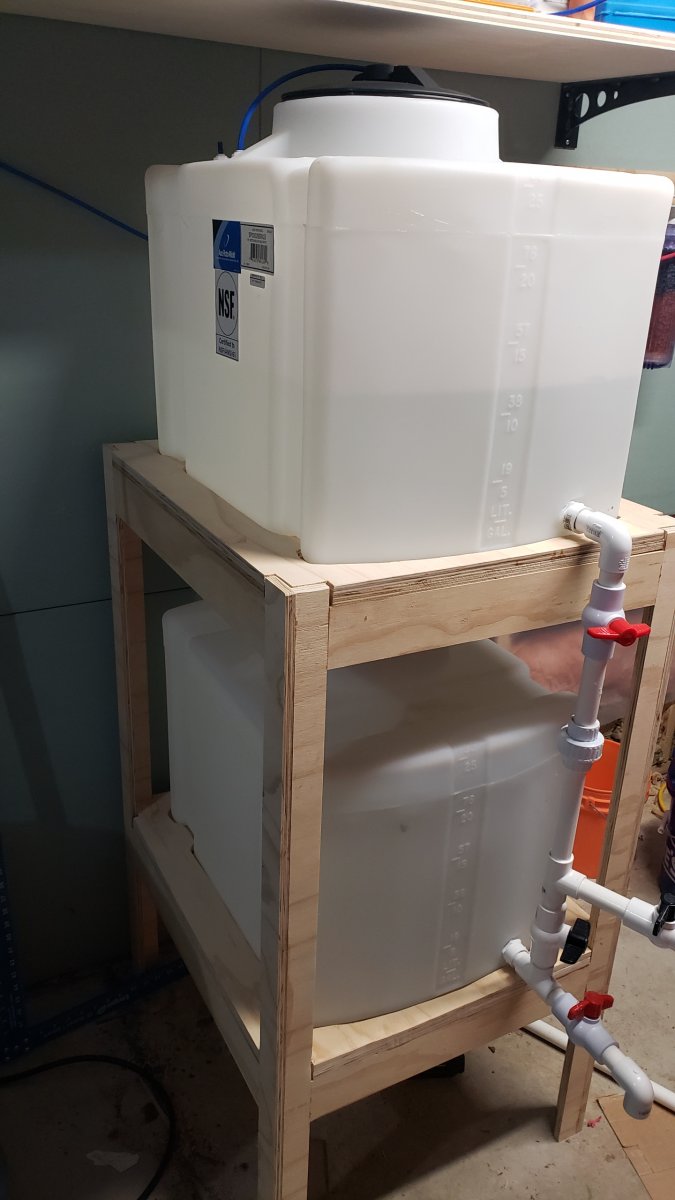 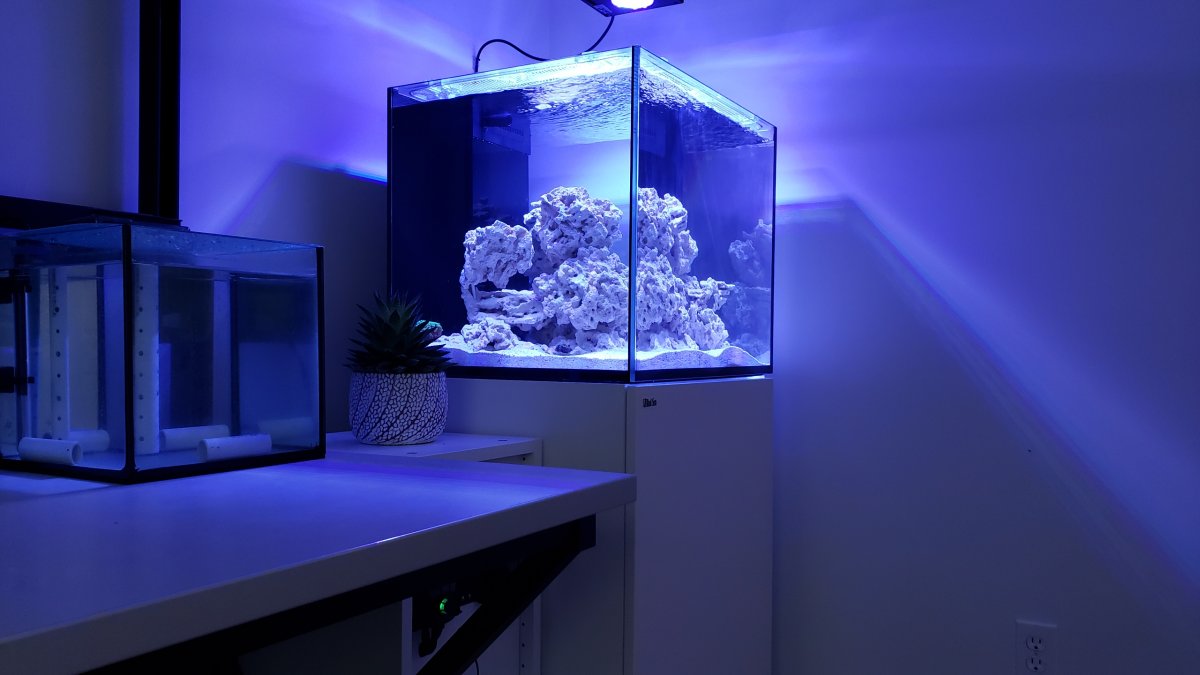 Fire Goby
Initially its fins were torn and the dorsal was much shorter. The fire goby coloured up nicely and has regrown the dorsal.
This is the reason I set up the QT tank initially, as this fish had flukes when I got it.
Extremely timid fish, so he's first into the tank.
Not expecting it to pair with the pistol shrimp, but I will probably add a yellow watchman goby later and hope they do.

Here's the mushroom in white light, at night mind so its a little closed up. Stunning color for a little thing. 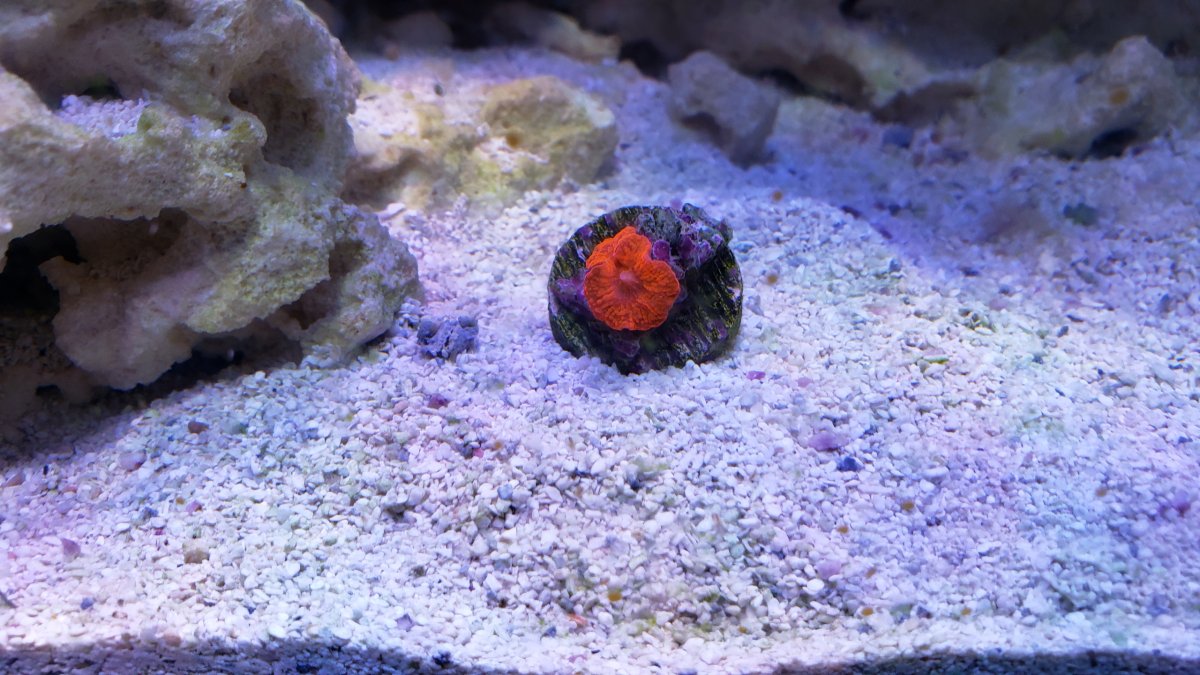 Another new addition, the torch. It's only about 1" across.
This guy has a tiny featherduster growing on the opposite side. 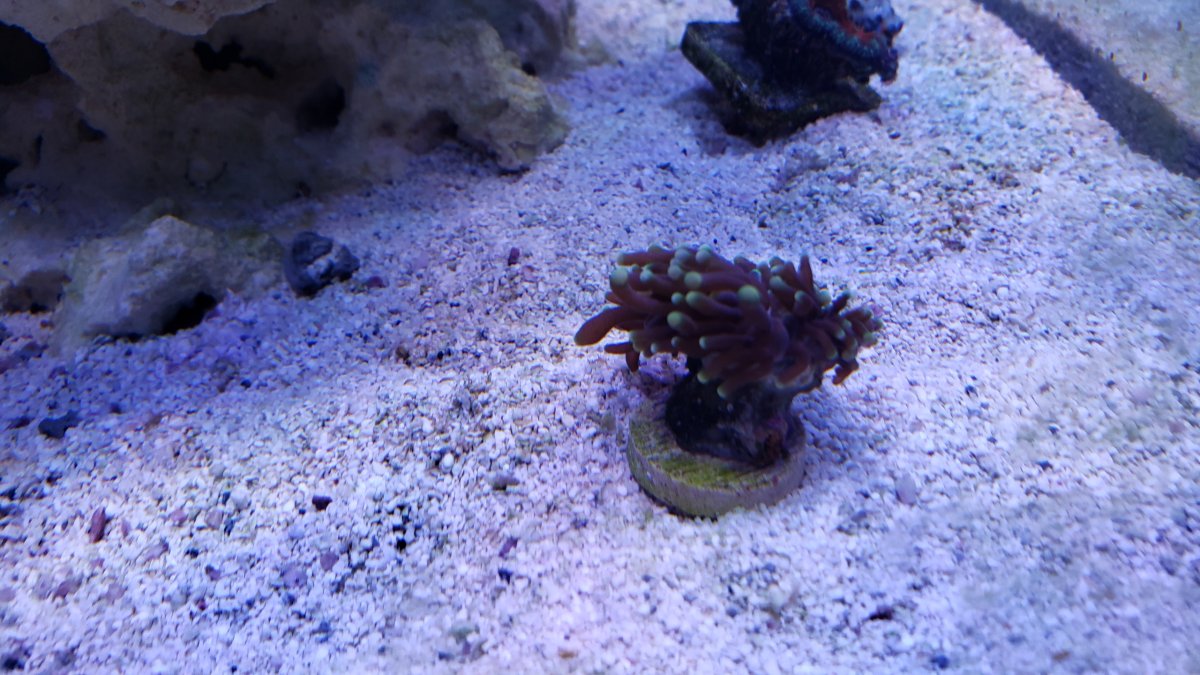 Radion hung from the ceiling with the Pisces Exo keeping my fire goby in the tank. Fire goby has hit the roof a couple times now, so well worth it. 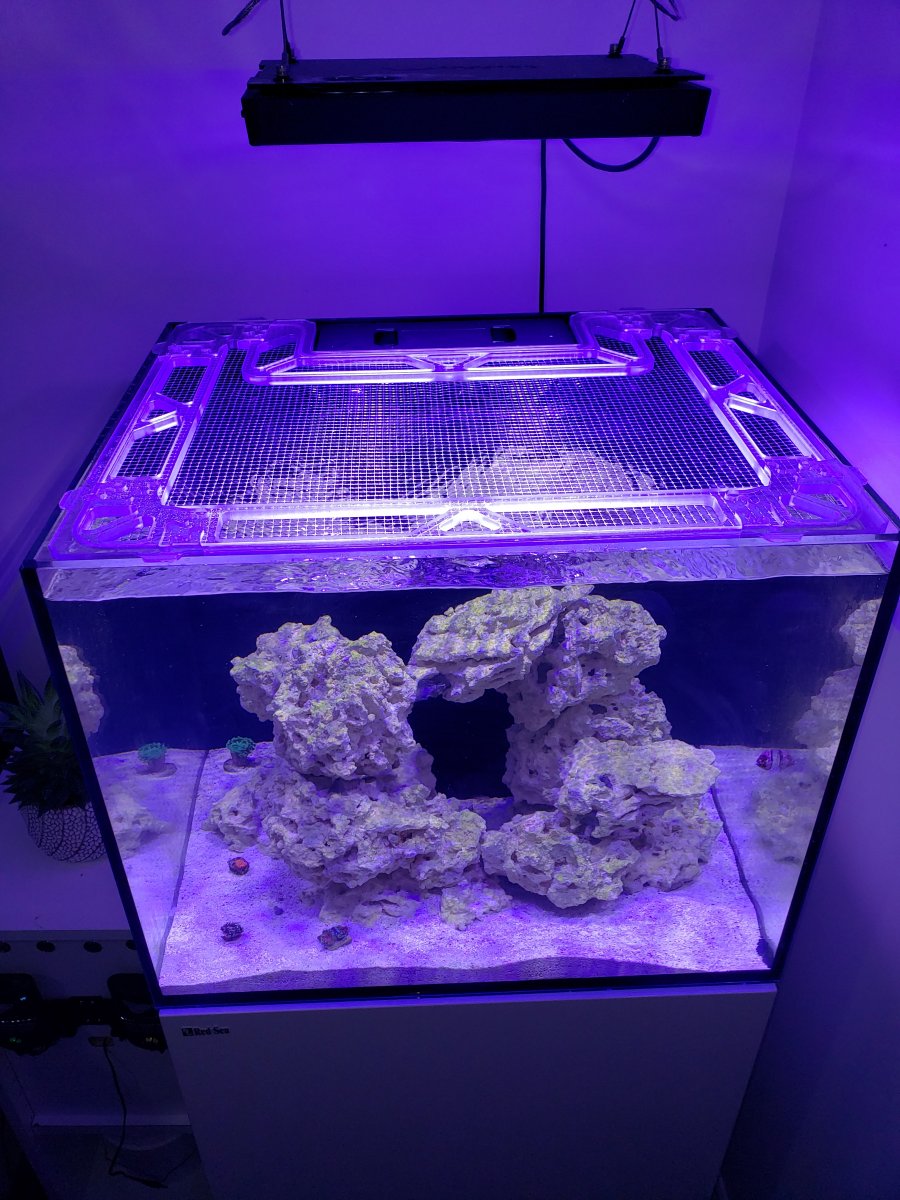 Front view. Corals are still down low and i'm going from 21% to 50% acclimation over 4 weeks with the Radion, using Deepwater Natural mode on the light.
MP10 on the right side, future plan is to put one on the right and have a reef crest mode. Currently I use lagoon mode. 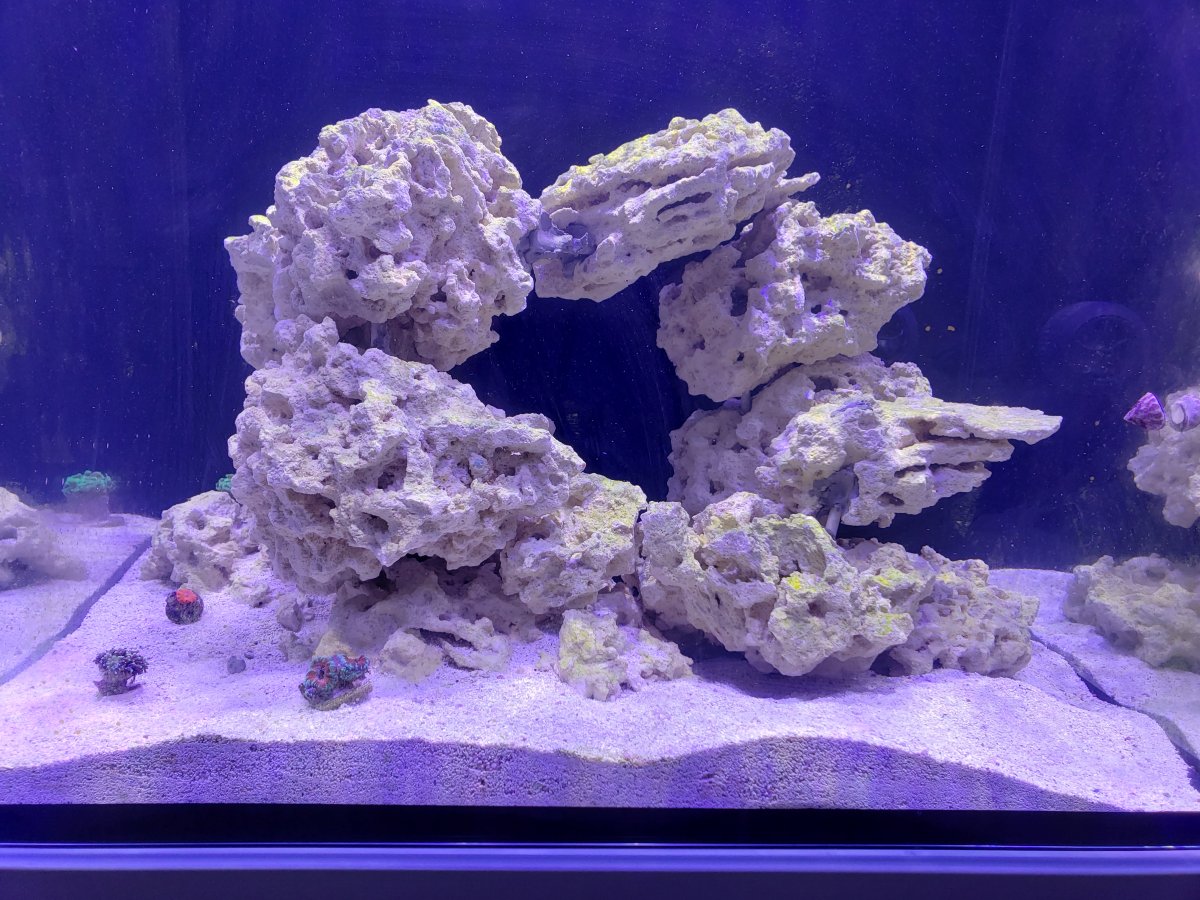 Side view, night time in daylight for the photo.
Hermit crab has been busy knocking the mushroom over. 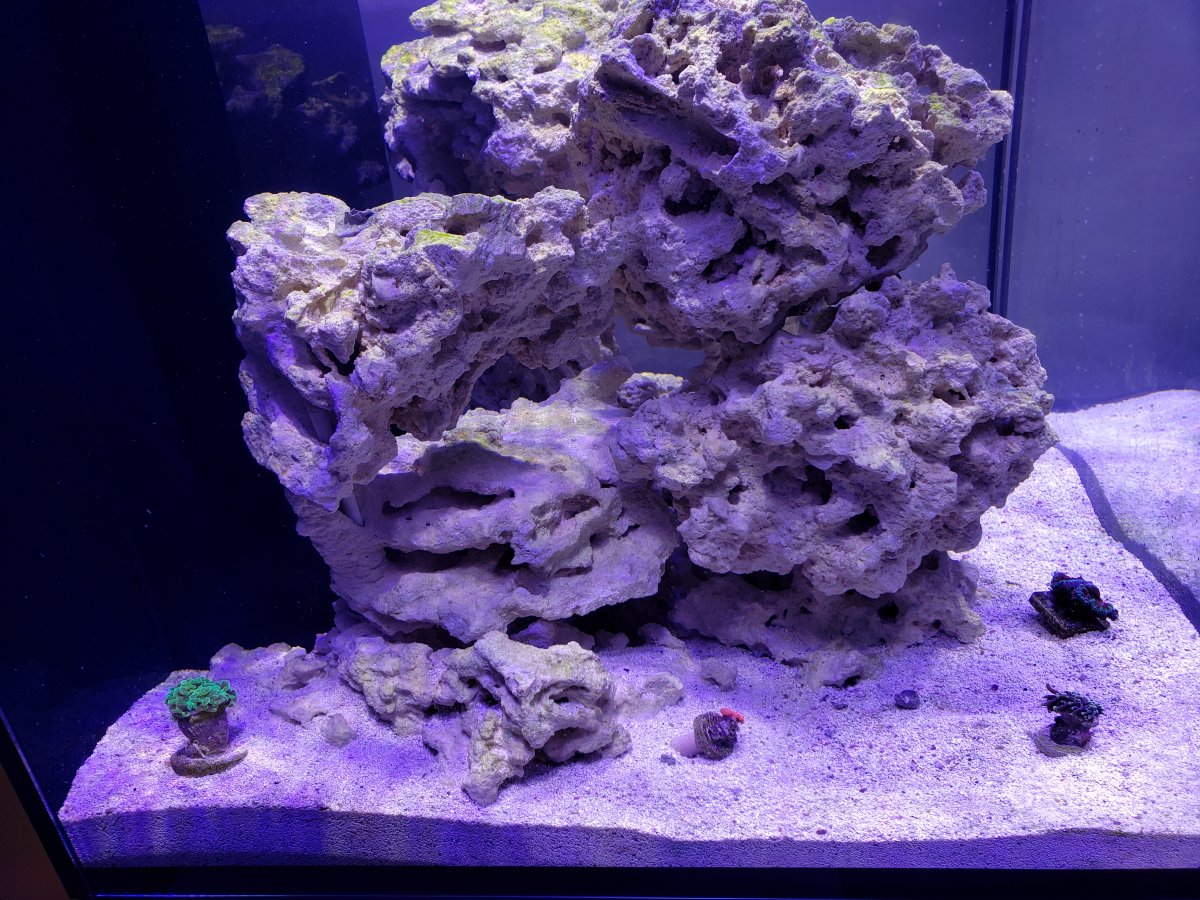 Here's the sump. Not much to look at. Nyos Quantum 120 front and center, the CDX isn't working that great as the skimmer doesn't pull that much air in this configuration. I'm working on a solution for that.
The medicine bottle is there to catch any condensate before it drips into the bottle of CDX media. 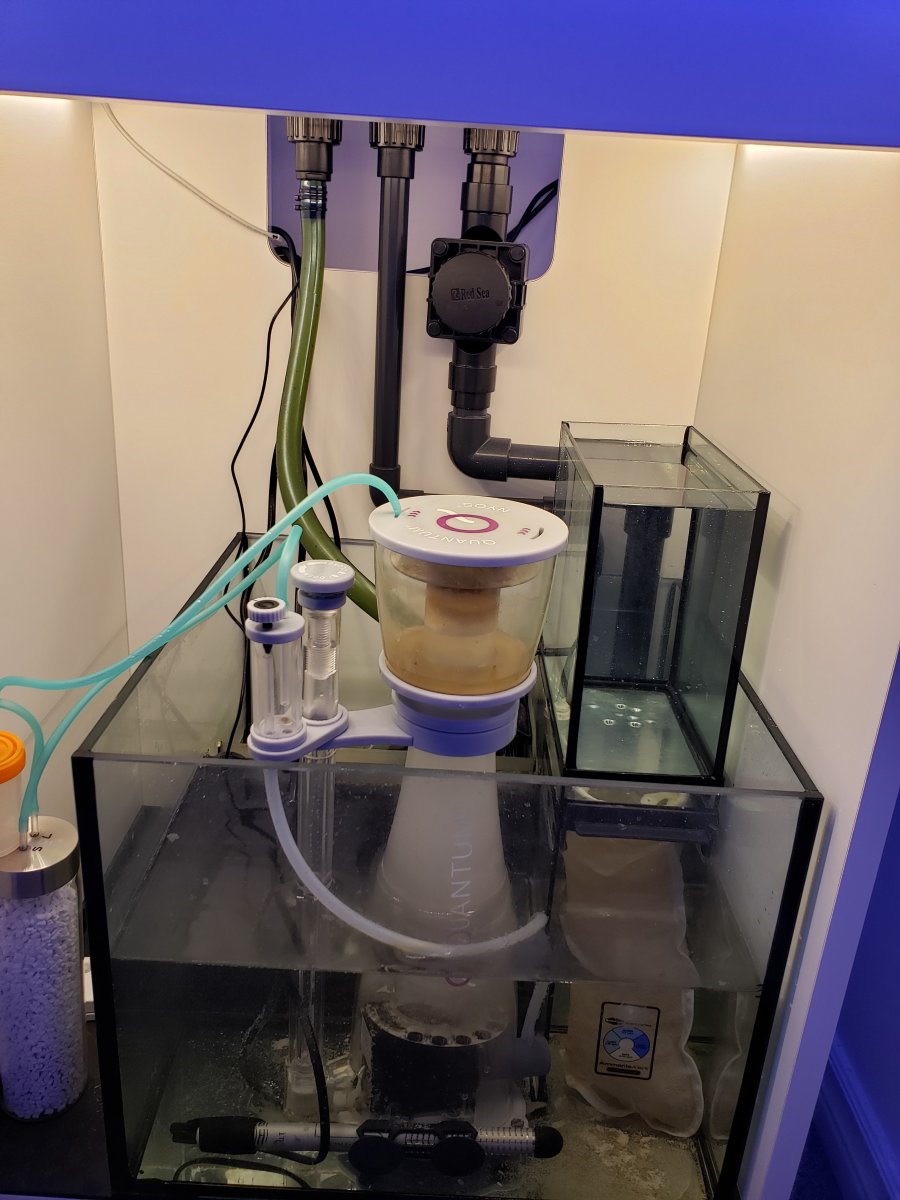 QT tank, had some PVC pieces in here that have been removed. Waiting for the next patient.
I have a piece of lexan for the top, just waiting on some tabs to hang it. For now this piece of face shield has been a good makeshift cover. 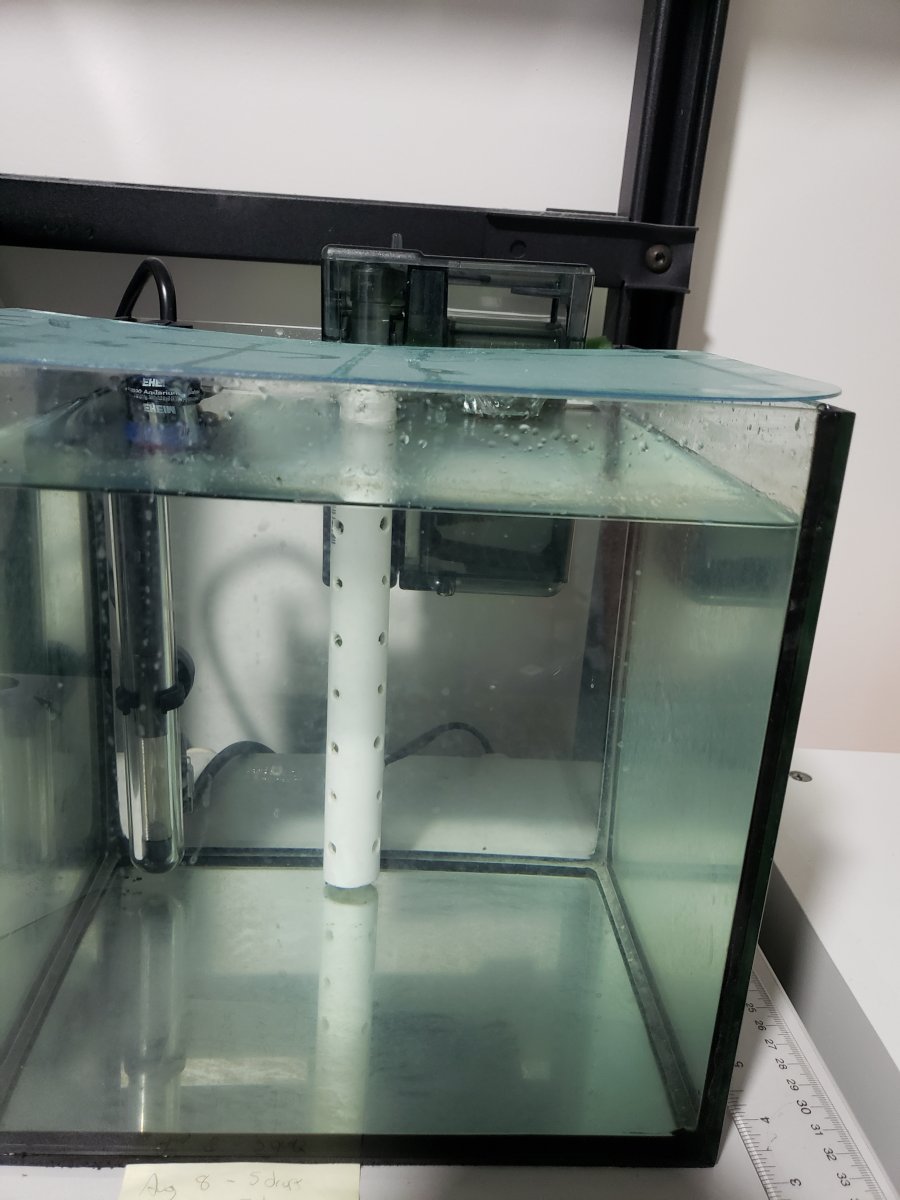 Here's the Sektion stand. I laminated a piece of 3/4" MDF for the front, and also used it to make a shelf.
It sits in there with the shelf pins, the front has a double row of holes so that worked out nicely.
Wires will be tidied up in the future once I add the Apex.
Open space in the middle is for a second MP10, battery backup is ready to go.

The buttons don't do anything yet, but they're white, blue, green, and red. Plan is to wire them to the PS2 style connection the Apex uses.
Haven't thought about the functions for the buttons yet as I don't know much about programming the Apex. 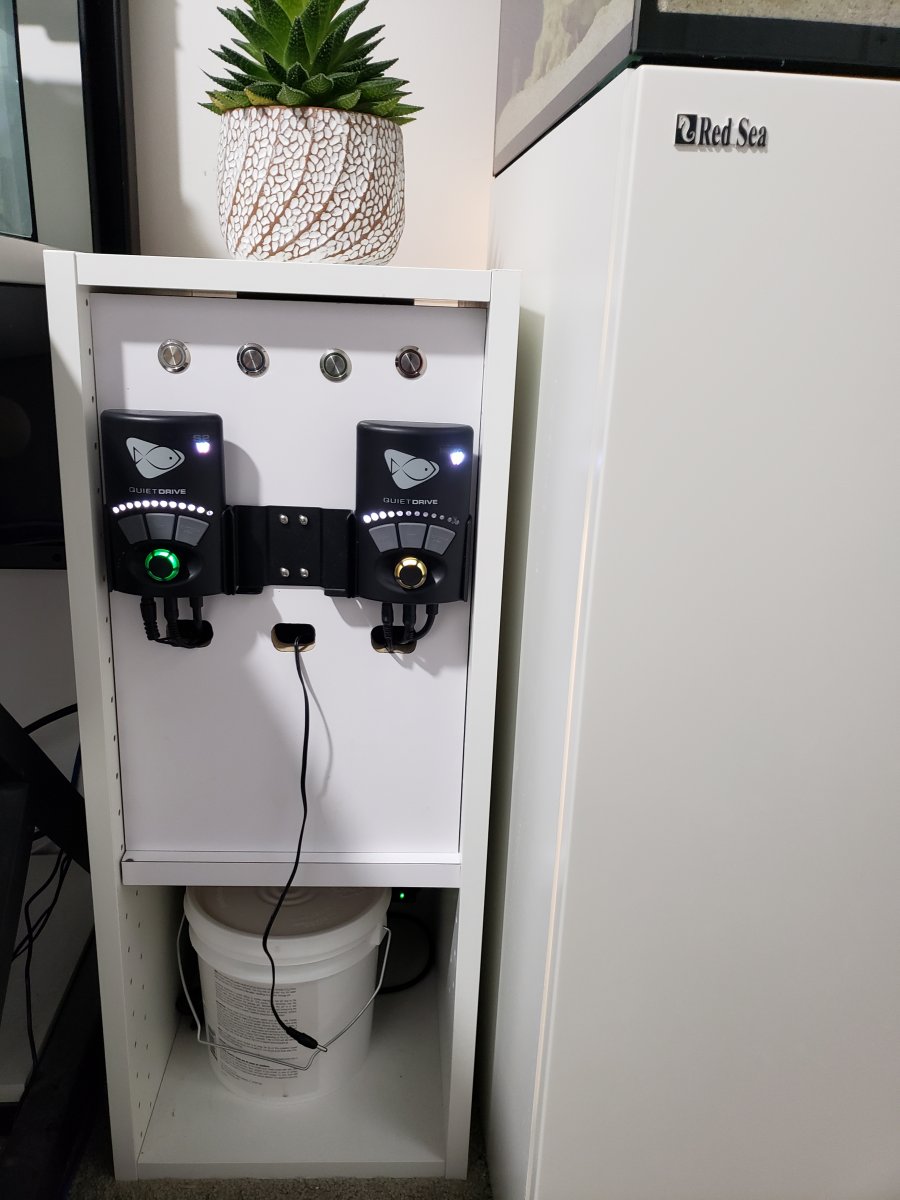 Fun little battery project. Little bit of soldering and heatshrink and its good. I'm not sure what the runtime is, but it should be enough.
I had a recent power outage and the whole system ran on UPS for 4 hours. Outages have been longer though in the past.
If UPS were to run out, I would lose the light and the heater and the battery will kick in for the Vectra and MP10.

On the box are 3 amp fuses for the Vectra and the MP10.
I have the Vectra calibrated for my tank, so i'm not sure if it will draw more than 3A on high flow, but seems fine.
There's a 5A main fuse inside the battery cover as well.
And I believe the Vectra adapter has its own inline fuse closer to the controller.
The jacks are Ebay special 2.5mm male for the MP10 and 2.5mm female bulkhead style connections I've mounted on the battery box.
Ebay special fuse box as well, and I got extra long (6' male 2.5mm) wires so slightly less work to make a male/male wire. 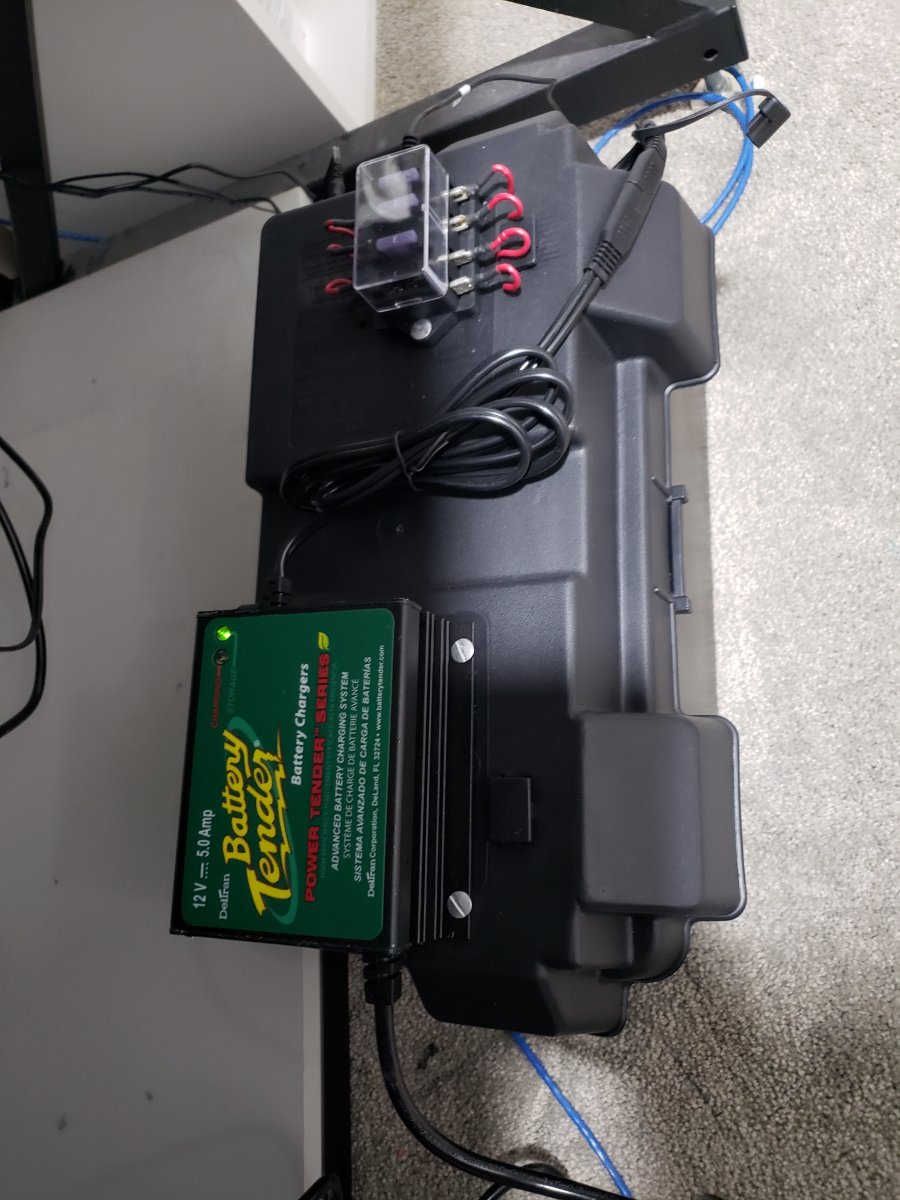 Welcome to Reef 2 Reef you are off to a great start!!

Got a Suregrip 50 magnetic holder for the maxijet 1200 that is in my saltwater storage tank.
Put zoo-med magnetic clips on the heater while I was in there.
The tank is never quite empty due to the bulkhead being off the bottom a few inches, but I will leave 5-7 gallons in the tank to make sure these stay wet.
These will keep things from floating away, as we all know suction cups don't last. 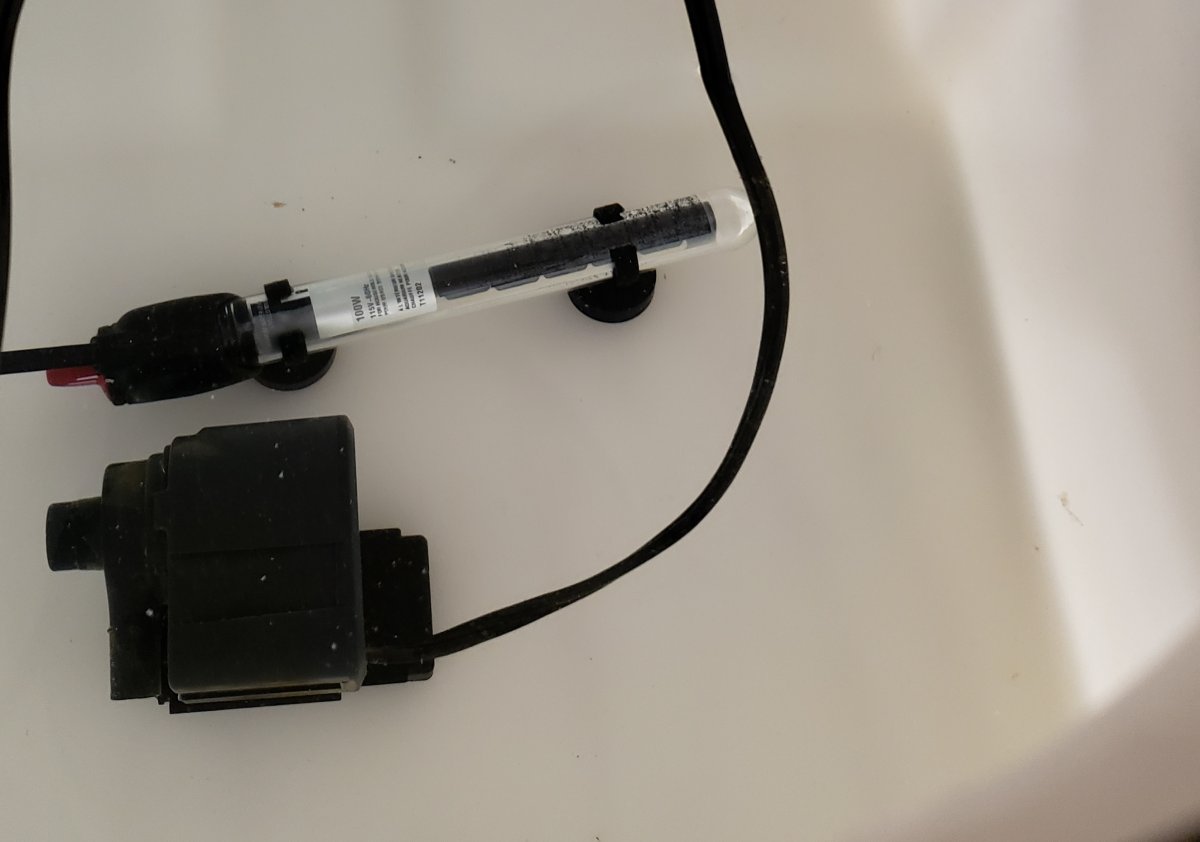 This is how I put the cords into the tank. The black rim is held in with stainless screws
From there I cut out a section of the white plastic, and re-attached the rim. 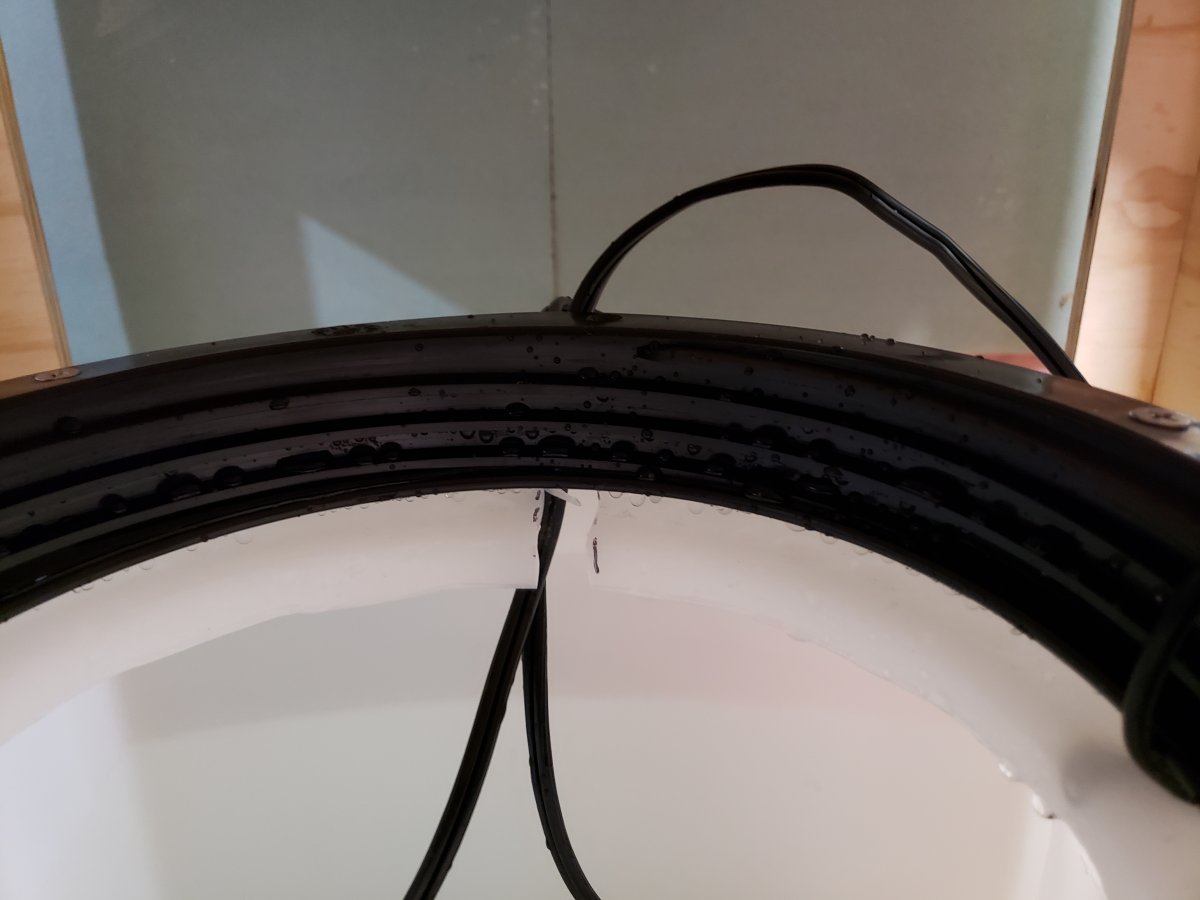 The outside magnets hold well through the 1/2" plywood.
Looks like some bracing may need to be in order on account of the crack supporting the storage tank bottom. 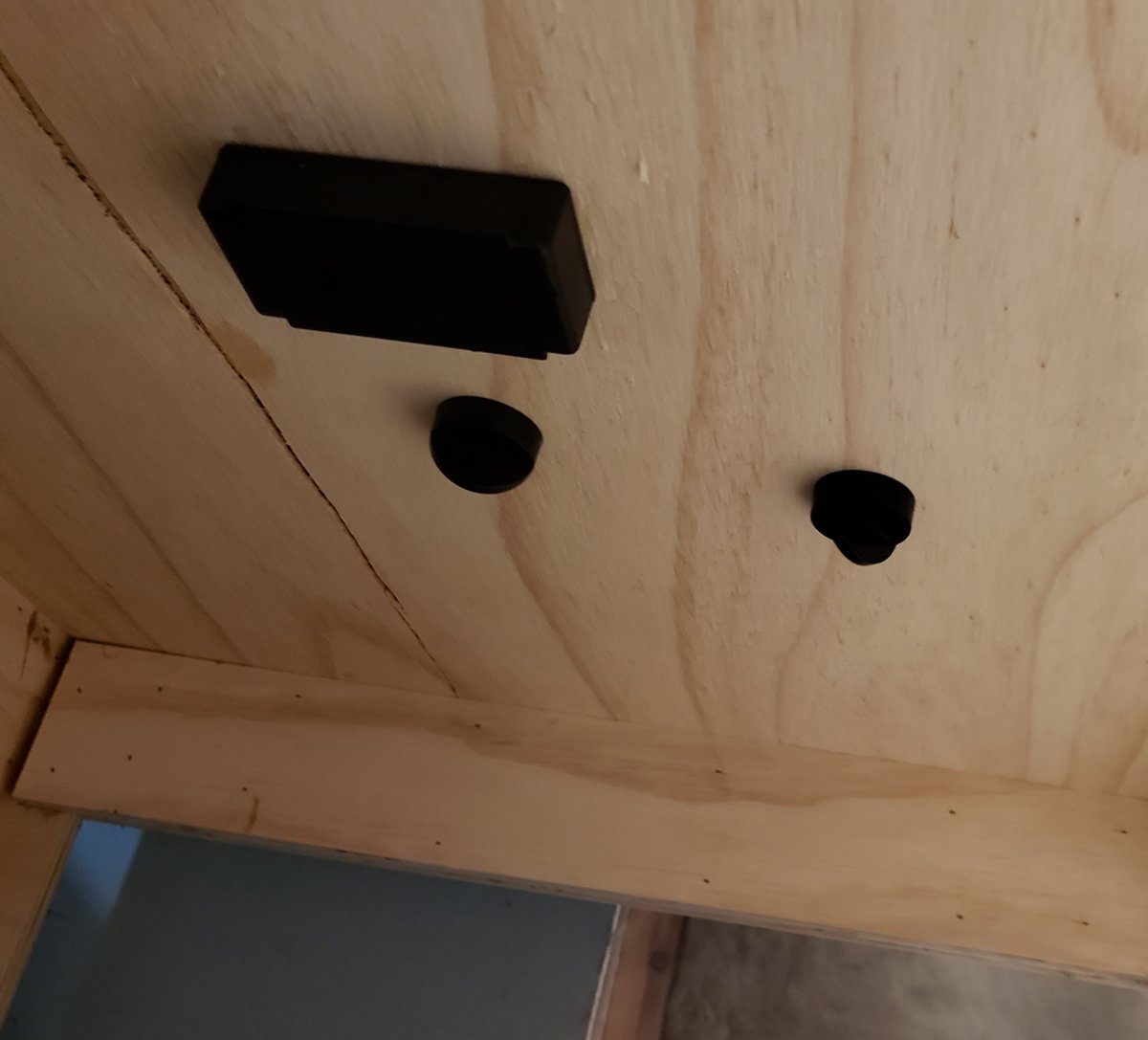 Soldered and heatshrunk these LEDs up and attached a 3.5mm female plug so I could use a spare 9v adapter I had kicking around.
The switched wires will attach to the aquarium monitor at some point in the future.

Also added a MP10 to the middle, now there is a Vortech on either side of the back glass in the aquarium. 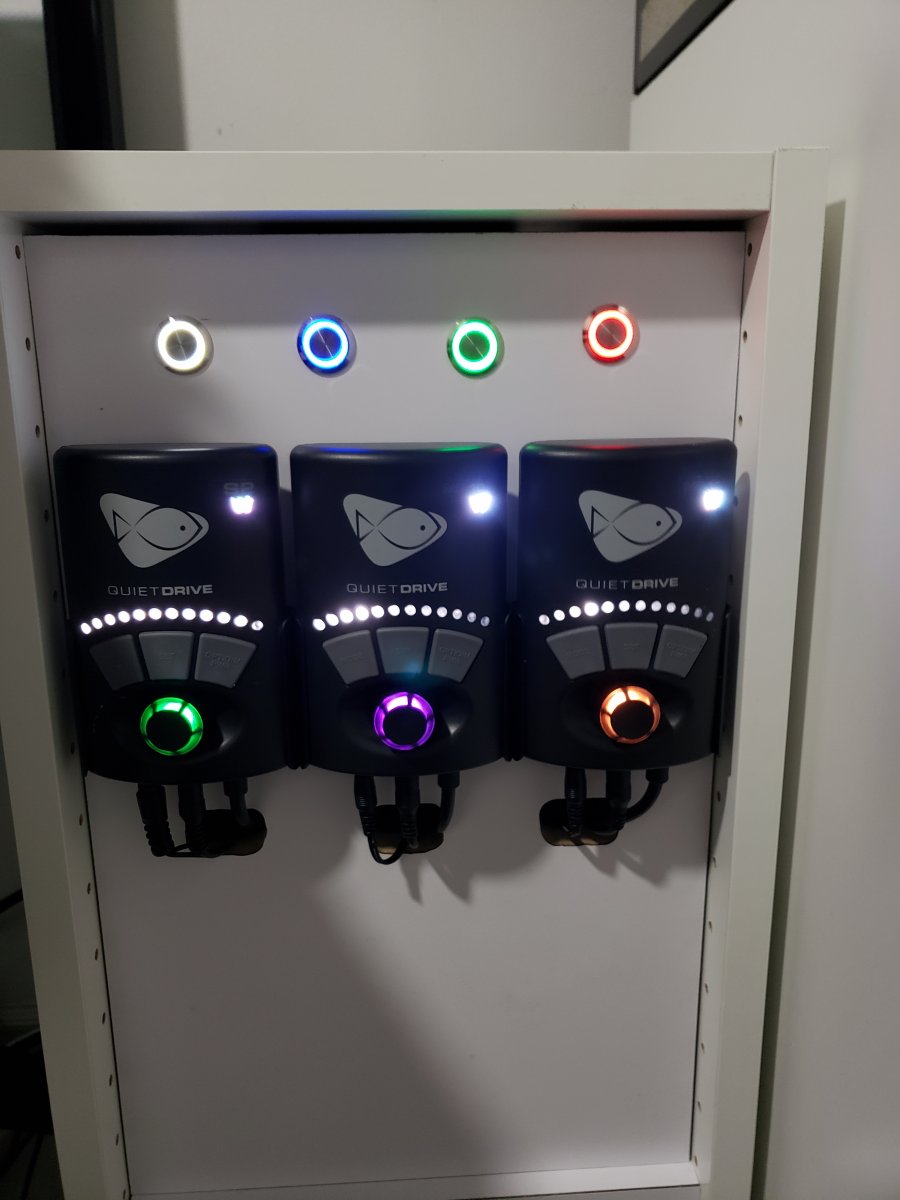 Spare wire off amazon for later on, same colors as the female connectors for the 19mm momentary switches. 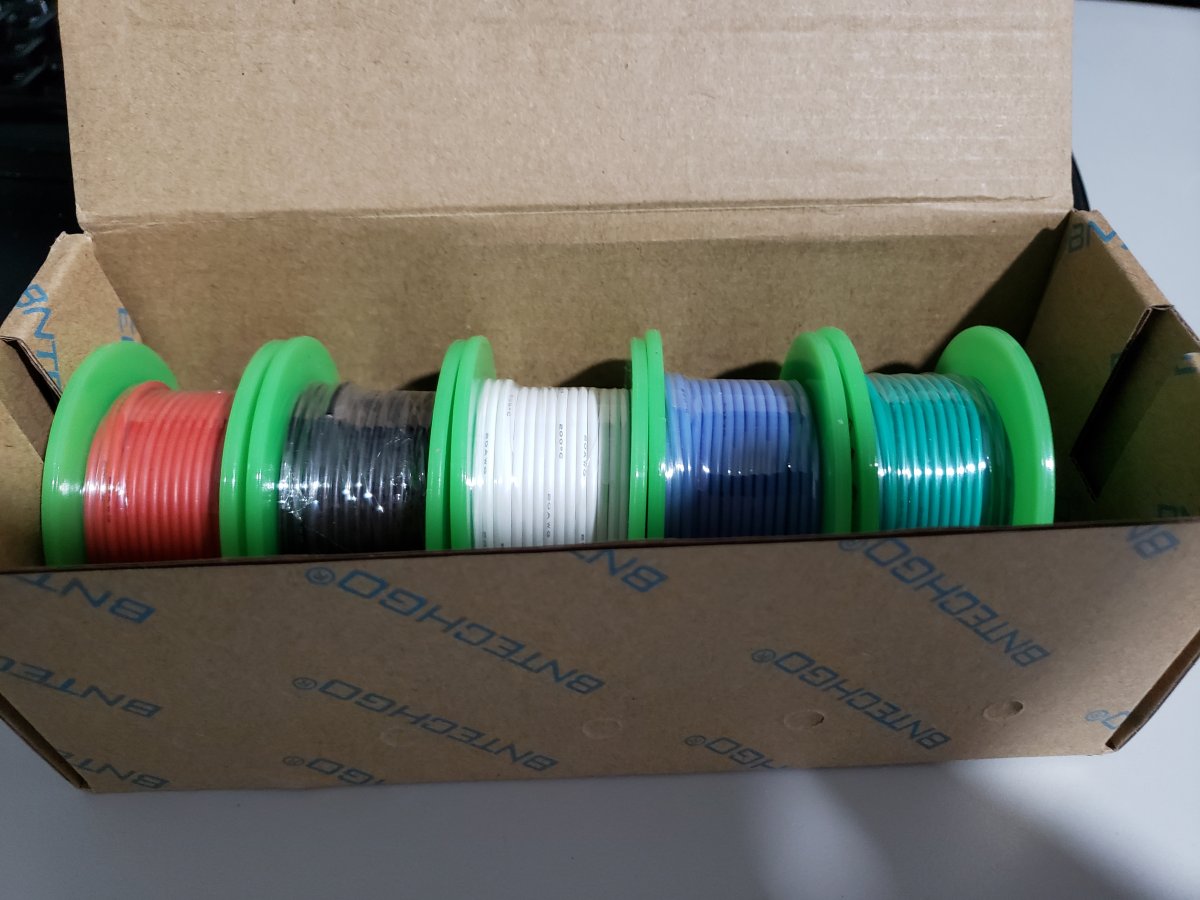 Looks awesome! Starting my 170 build this week. Any updates?
OP

Thanks @trace100, i hope you document it for a build thread.

A few updates but no big changes.

1) Ordered pvc tube and fittings to convert to hard plumbing with a manifold
I will set it up to run 2 aquamaxx reactors, a refugium and 1 spare line


2) Planning to go with GHL for monitoring. Part of the hard plumb plan is to put n 3 spots for GHL flow sensors, a 5000 l/h and 2 2000 l/h. My idea was to make a dummy insert then swap it out for the flow sensors when I get then.

I havent worked out what unions I can use, the 5000 being adapted to 3/4" plumbing and the 2000 using 1/2". There are metric to imperial unions but nobody lists the specs of the union nut thread, which needs to be a bspp thread.

3) i got a yasha goby on the weekend. In QT for now, it will be nice if the goby finds one of the pistol shrimp when I put it in the display. I was suprised the yasha goby is like half the size of my fire goby. I guess that explains why they can hang out in a pistol's burrow.

4) After fixing my PH issue I noticed my acan lord growth took off and alk usage went up. PH went from 7.6 to over 8 just by getting fresh air into the house. I've since installed a Tongdy CO2 meter onto my house HRV system to keep it in check.

5) I have a Nyos Quantum 120 skimmer, and I noticed the skimming performance was poor after being great for months. I added a piece of lexan where the bubble trap is in the refugium, and this raised the water level about 1". Now it is at the low end of the manufacturers recommended range instead of below it, and I am getting a good skimmate again.
OP

So I was able to work with a vendor to order some GHL gear, this isn't all connected yet as I am waiting for some PVC to arrive to hard plumb the measurement cell and flow sensors. 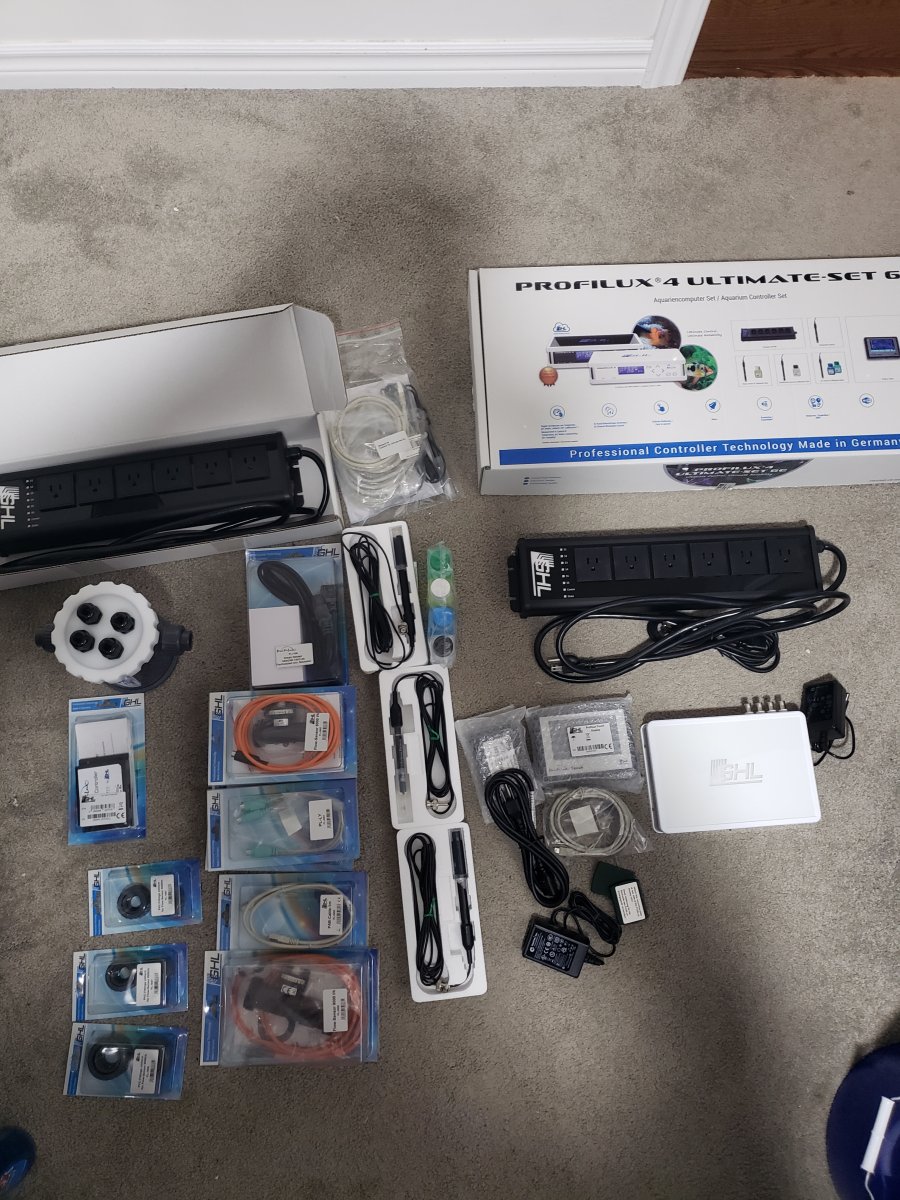 On my desk next to the tank, nothing much to see here other than the pretty blue GHL logo.
Have it connected via USB and WIFI 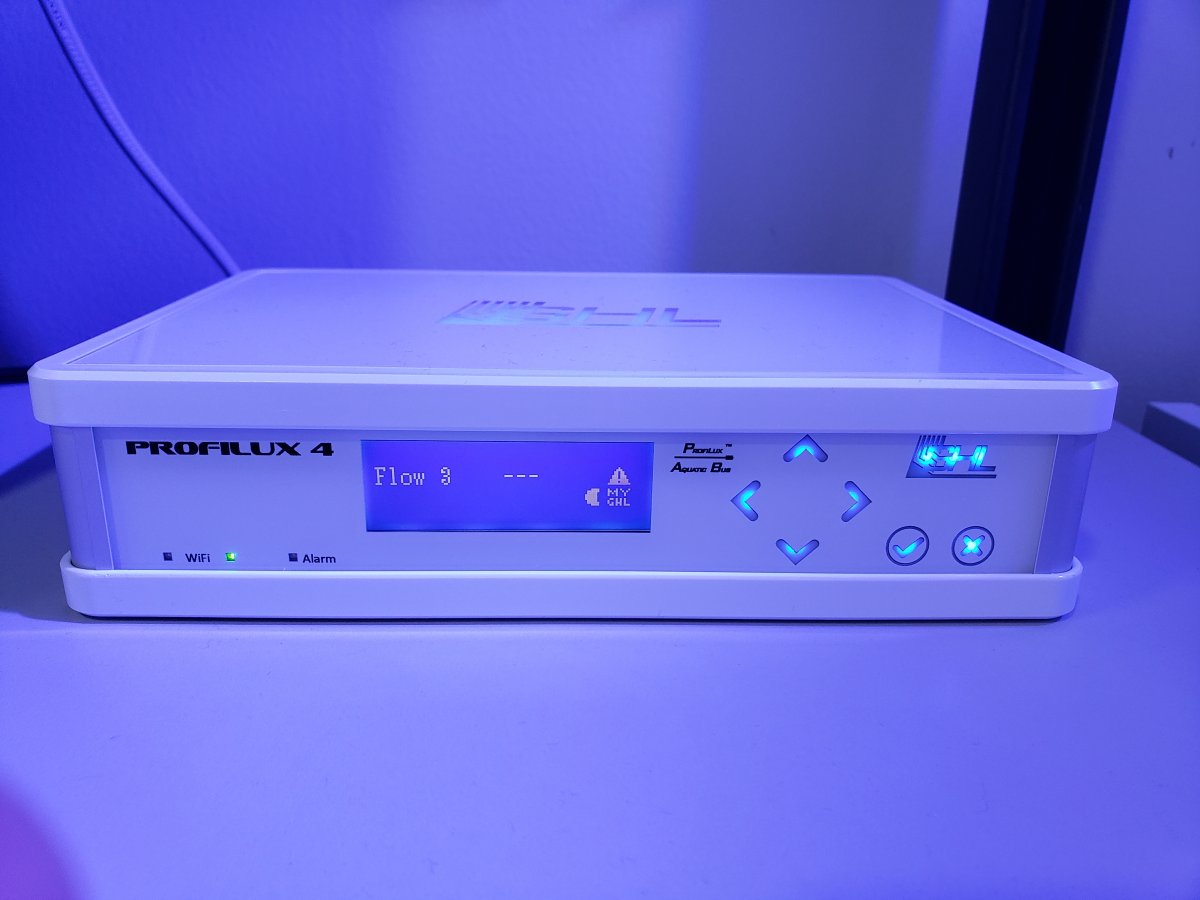 Ordered this custom refugium and picked it up a few weeks ago. Got the idea from another forum user who has a Reefer 170 - Lisa Page.

Took some measurements and it fit perfect as you can see by the picture. Door hinges did need to come off to slide it in.
The space at the front is for my CDX media 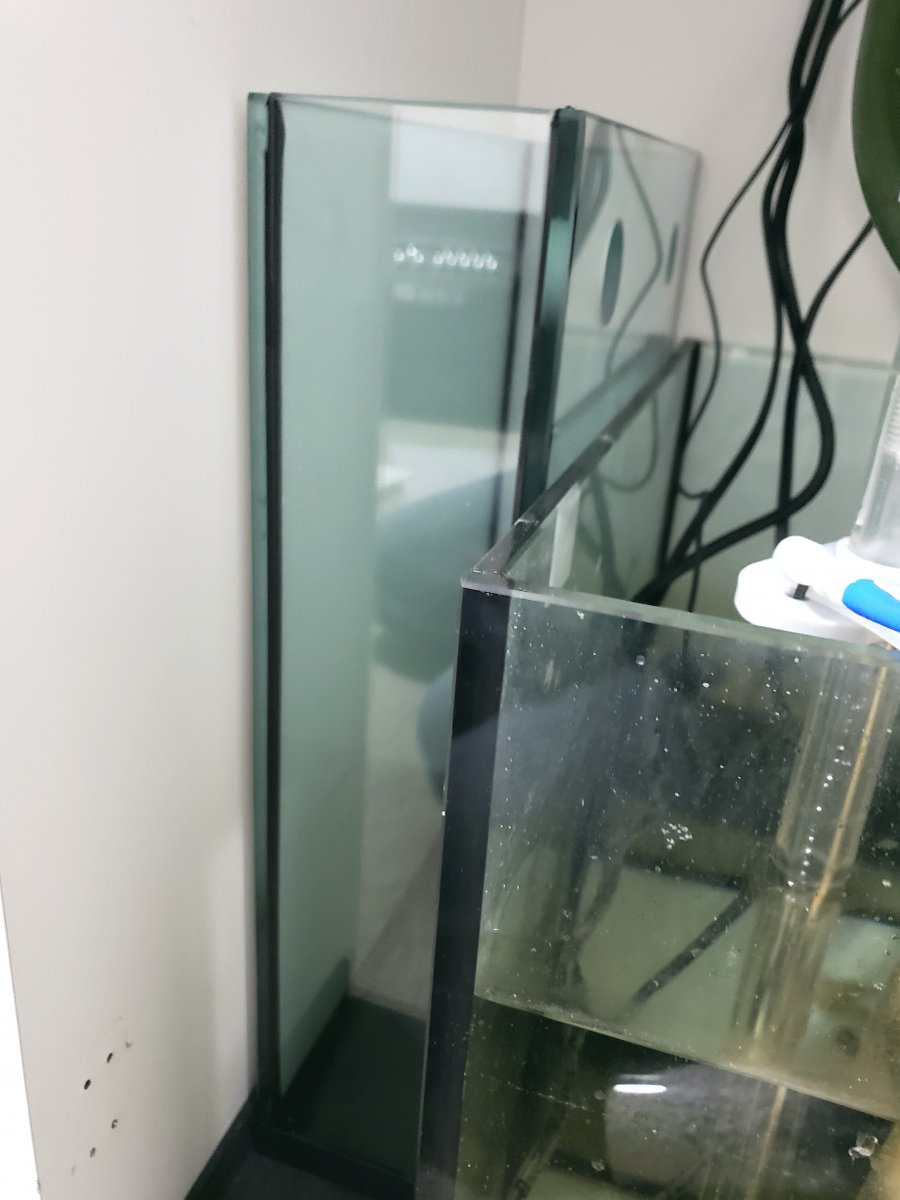 Powerbars plugged in, connected to the PAB ports and labelled. 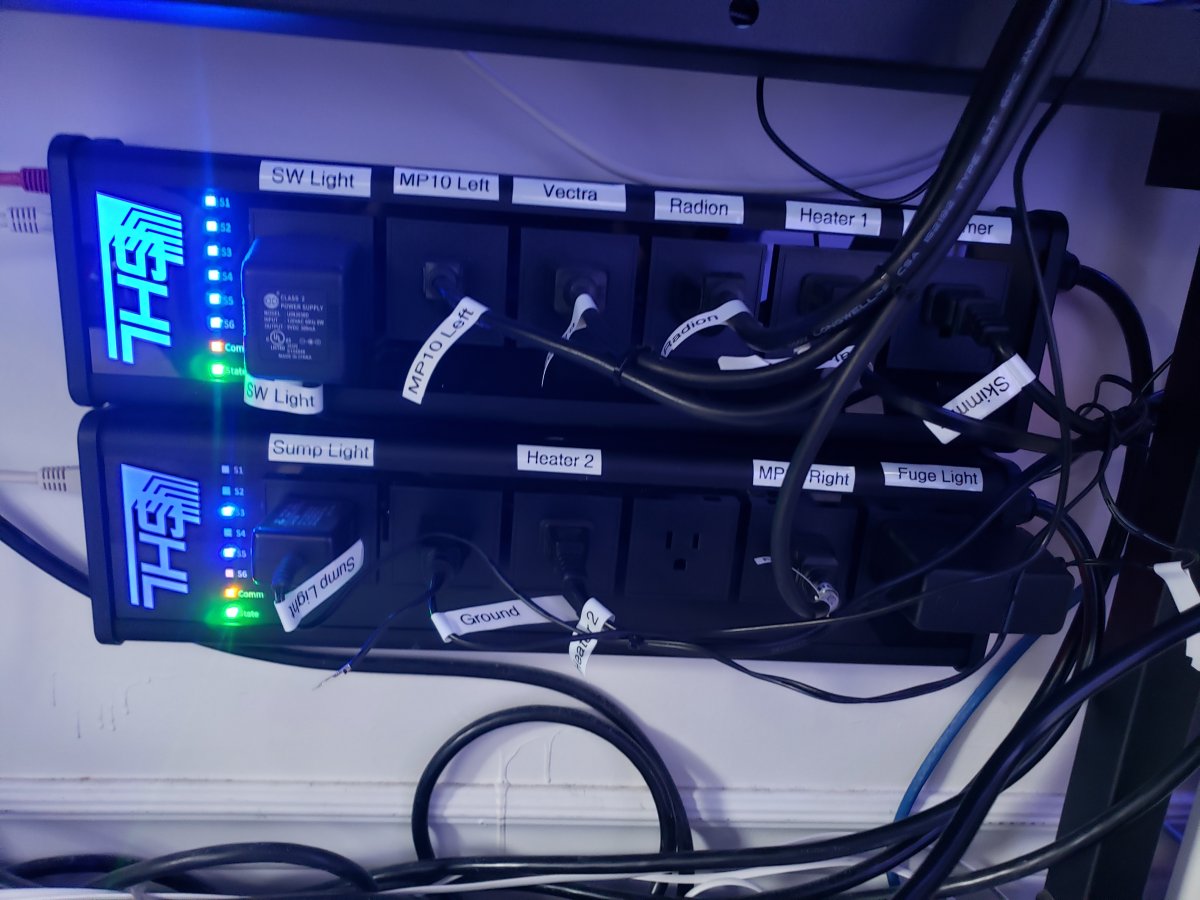 This is a 5v 4 relay board meant for Arduinos, the L-ports are not really designed to run relays, so should be limited to 10 or 20 milliamp output. This board has the signal inputs for the relays as well as the required clamping diode across the coil.

Thanks to a forum post I found the minidin6 pinout and was able to wire up relay control based on the Illumination ports. Not sure what to use these for yet as programming conditions for illumination doesn't seem to be possible. 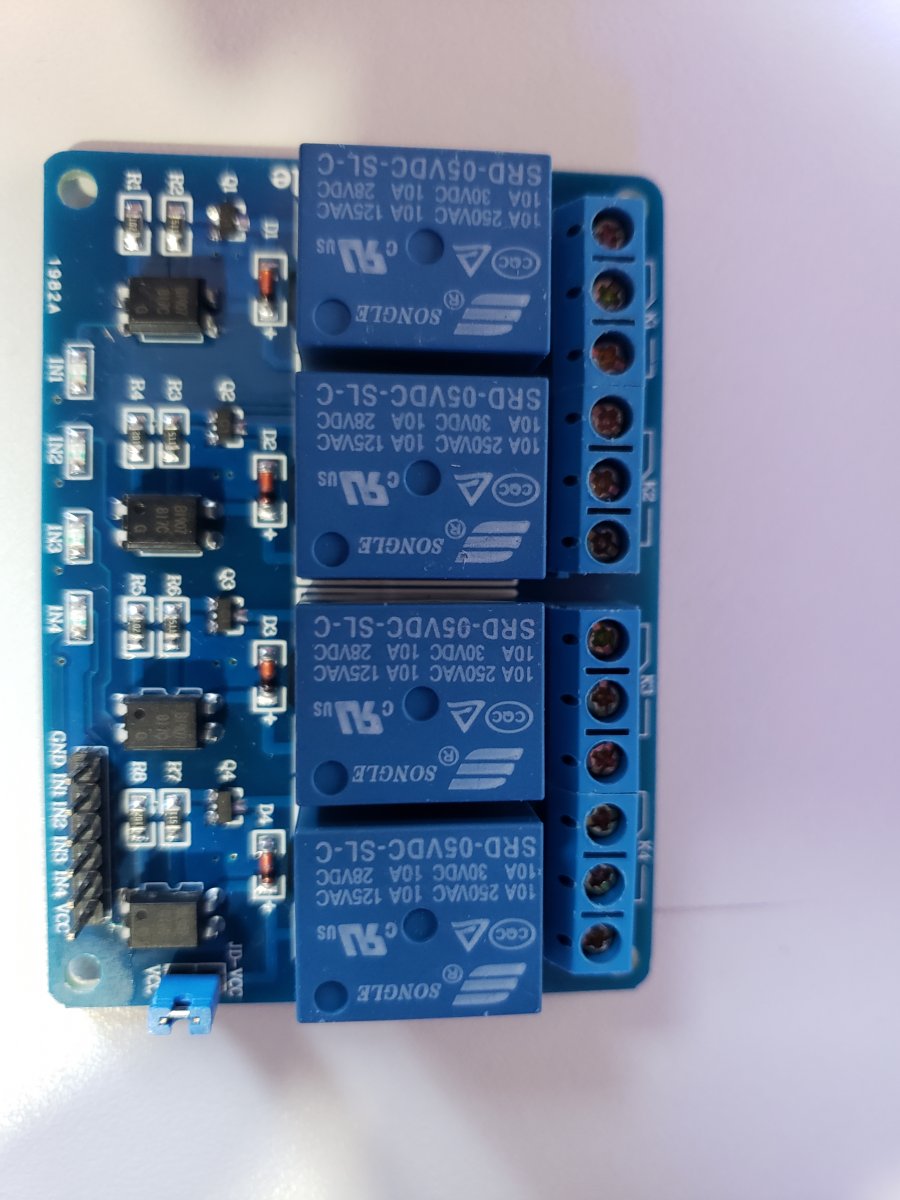 Similar board as above, but this will run off the S-port, and these relays use 12v signaling and power supply.
This will go into a project box and could run a few things -

May still add the GHL breakout box to clean up the wiring a bit.

Welcome to R2R!
Looking forward to the progress of your tank!
OP 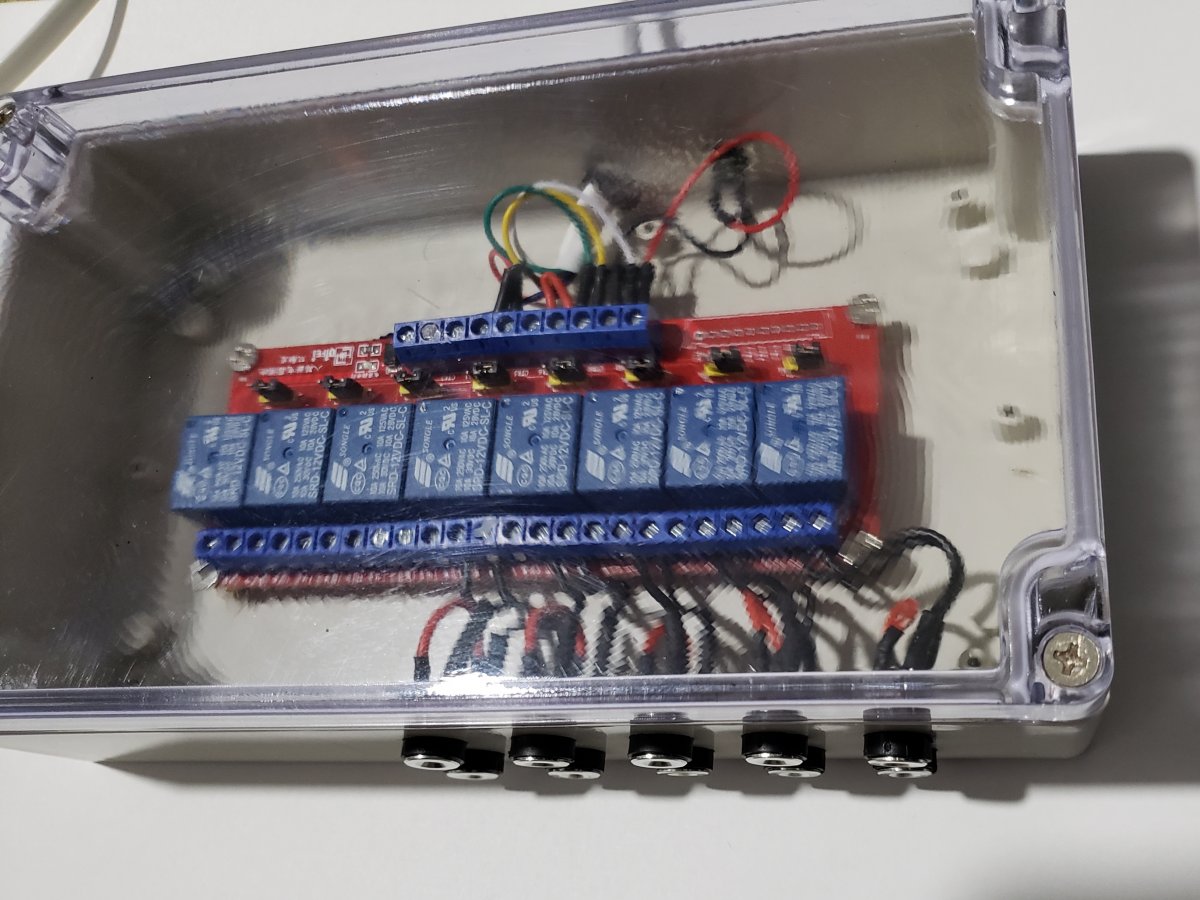 Hard plumbing progress. There is a spot for a second reactor and the GHL measurement cell

CDX media out front, and the 1/4" tubing will get cleaned up soon. 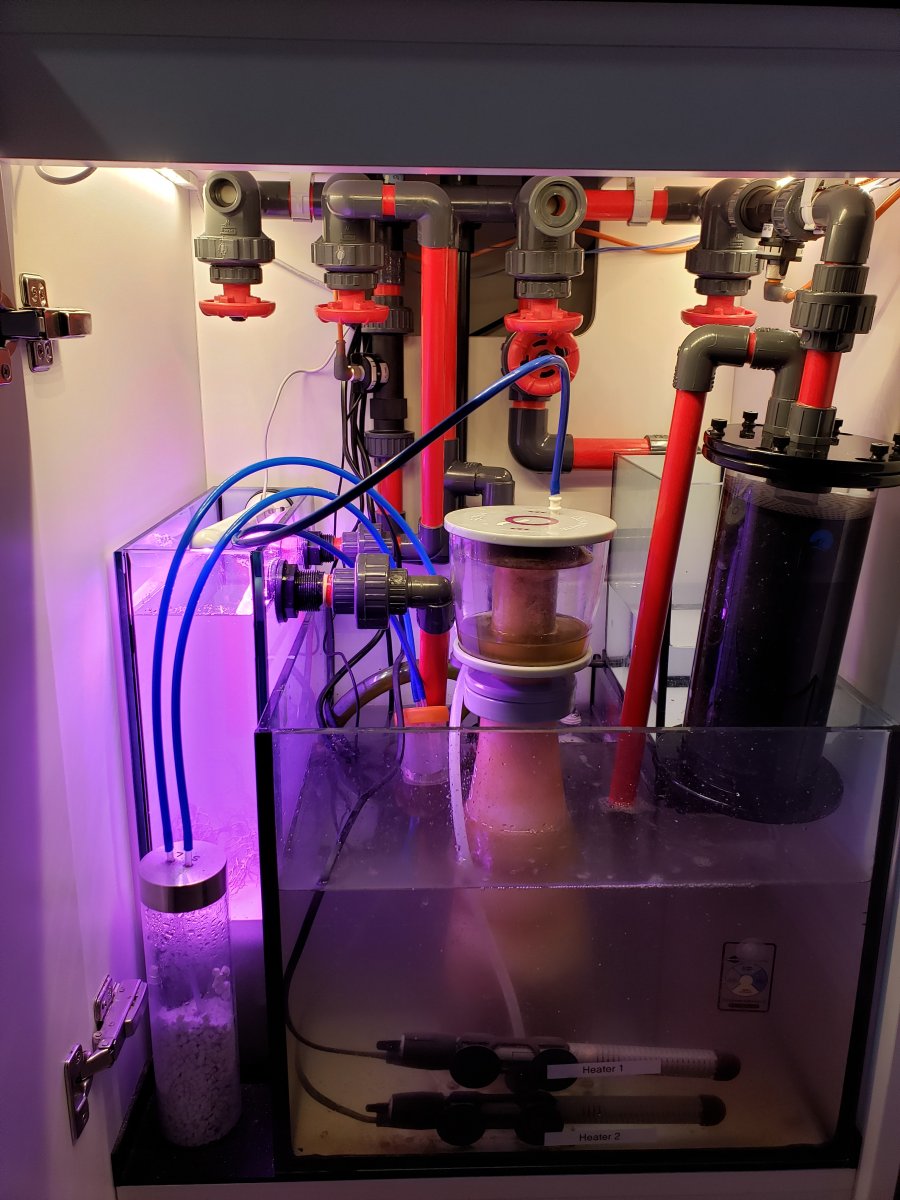