Start this off by saying the wife wants to do new carpet and hard wood floors in the house/possibly sell. Since my current tank needs to be moved to accomplish this, she has determined fish tanks don’t need to be in the house and the garage is mine to do with as I please. I currently have a 40g setup and am setting up a 80g shallow in the garage.

Tank is 4’X2’X16” with a wood stand. Custom tank that has a top and bottom brace and a middle brace that I’m honestly not sure is needed. I’ll keep it there since it was made to have it but there’s plenty of rimless 80’s this same size.

The sump is a really old oceanic but it’ll get the job done. Only has two chambers, one for equipment and one for the return pump. I plan on using some very course aquamesh to divide the equipment area into two for chaeto and the skimmer.

The rock I’m using is a lot of the brs reefsaver and some old pukani that’s been in a brute “cycling” for a few months. Honestly just put it in changed the water a few times and then forgot about it.

For equipment I have two gyre pumps but with the tank being peninsula style I’ll only use one and the other as a back up, unless I put one on the overflow which could be possible I’m sure. I have the icecap battery backup as well. Filtration I’ll be using and older style reef octopus 110 internal protein skimmer and chaeto grown with a Kessil H160. Brs reactor for carbon and the return pump right now is a jebao 6500 that I got in a trade and will be used until I upgrade. The return manifold has three valves that will be used to power reactors or whatever I need. The manifold also has a fourth valve that will be used for when I plumb in a frag tank.

As for lighting I have a few options to go with. My current tank has a Reefbrite mh/led 250watt pendant over it and 2 Kessil a160’s but I’m currently having a heat issue that was combated last summer with a fan over the surface of the water but isn’t doing the job this summer. This tank will be in the garage and not the cooled house. I do have a broken chillier that I need to try to fix that could help with this issue. With that being said I have the 250watt reefbrite pendant, 48” 6 bulb t5, 2 older style hydra 52’s and 2 Kessil a160’s that I could put over this tank and am having a hard time deciding what to put over it. Also possibly looking into the aquatic life fixture if I sold something else.

Thank has been cycling for a few weeks now and the parameters are looking good. I’ll be adding fish at the end of the week with 10oz of dr. Tims one and only really only to help things go smoother. Once the fish are added i’ll of course get another bloom of algae and I think once the tank settles again I’ll then add the chaeto, can be convinced otherwise of this though. After a few weeks I’ll then add the lights to the tank with whatever I decide.

Sorry like I said tank has been setup awhile so heres a bombardment of photos to catch things up.

Any input is greatly appreciated. I have another tank build for my current tank that I didn’t update but really plan on doing a much better job with this tank and want to have progression of it’s growth. Thanks in advance!
OP

Tough crowd! The tank has finished cycling, I added fish and once the tank stabilizes again I plan on adding chaeto and a test coral. Never owned a leather (pest) but whatever I’ll use one as my test coral.
OP

Almost forgot to add I threw the t5 light over the tank, it took me 5 minutes and it looks really good. I’m in Colorado and we’ve had some good heat lately, that has proven to me that halides will not work on this tank in the garage. I’m going to stick with the t5’s for now but may switch to an aquatic life 48” t5 with some kessils later on. 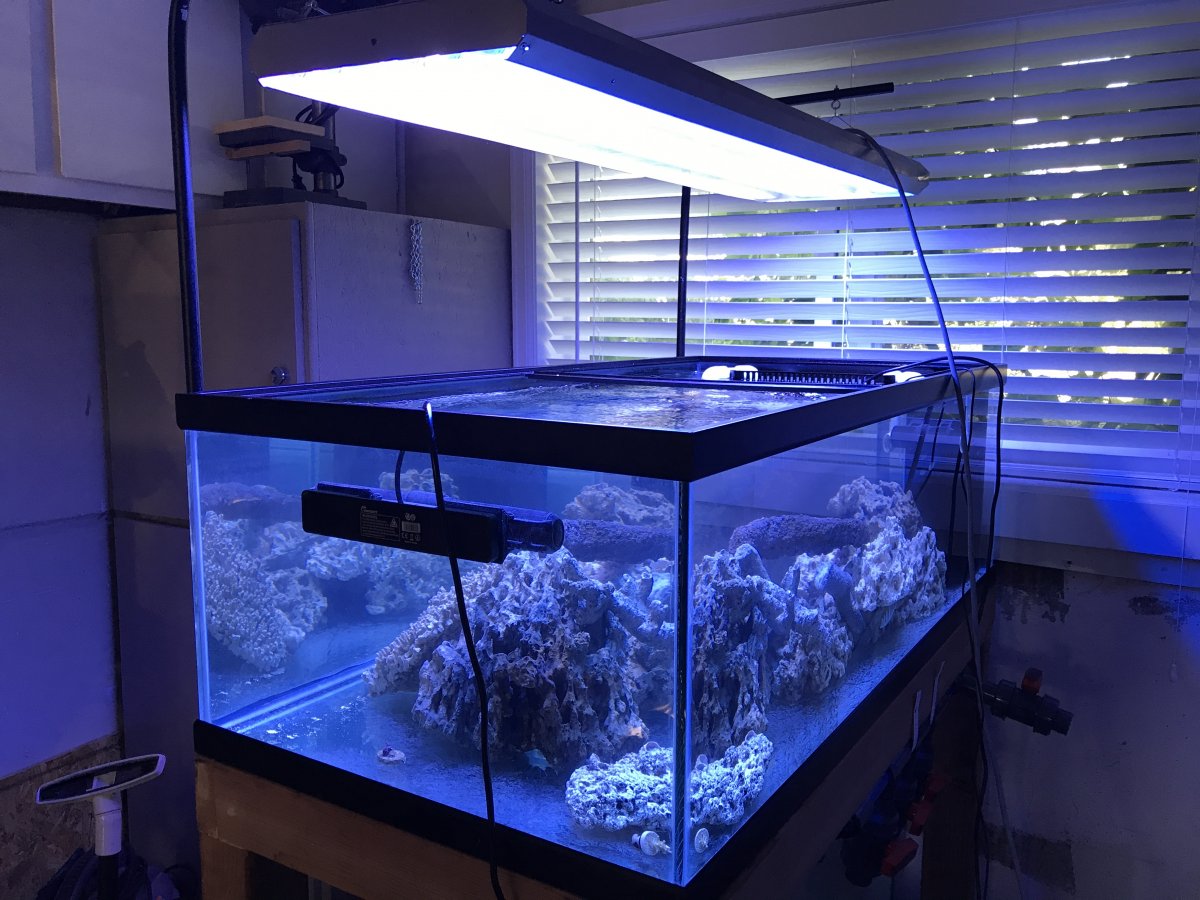 I wish I had a dedicated room for my tank! My garage has to much junk in it tho! I've always been a MH fan but the heat is the real issue. You could put a window AC unit to combat that?

cincyfishguy said:
I wish I had a dedicated room for my tank! My garage has to much junk in it tho! I've always been a MH fan but the heat is the real issue. You could put a window AC unit to combat that?
Click to expand...

I could probably do that but I can just hear the wife asking why the *@%# I’m cooling the garage haha. I’ve never used t5 so I’m actually okay with not being able to do MH and trying something new. I don’t know if I brought it up but I have a broken chiller that I need to try to fix, if I’m able to fix it I’ll have that to use but haven’t torn into yet.
Nice to have a room I can do whatever I want in it but majority of the garage is wood working equipment and a home gym. It works though.

Perfect! Was really hoping that 6 would be enough and thank you, still along ways to go but it’s coming together.
OP

So I started the tank with a fishless cycle. I added 4 fish 2 chromis, tomini tang and a square tail bristletooth tang. Now that the fish are added I start a 10hr light cycle. Needless to say I’ve had a huge spike in diatoms and tanks is doing a mini cycle again. I expected this and am just going to let it play out. Once it equalizes again I’ll add some chaeto and hopefully more fish and some more corals. Was given a free red mushroom and toadstool. Never owned either before for some reason so thought why not. 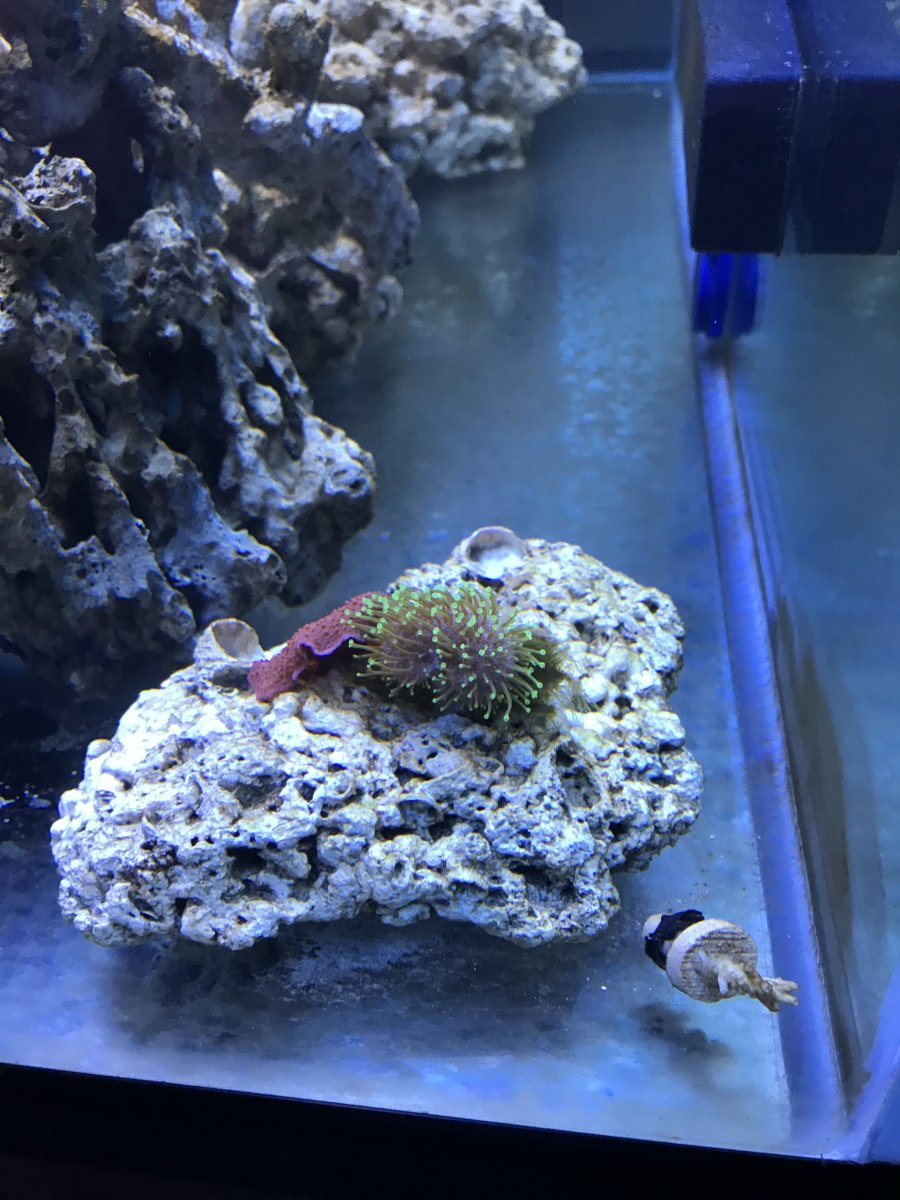 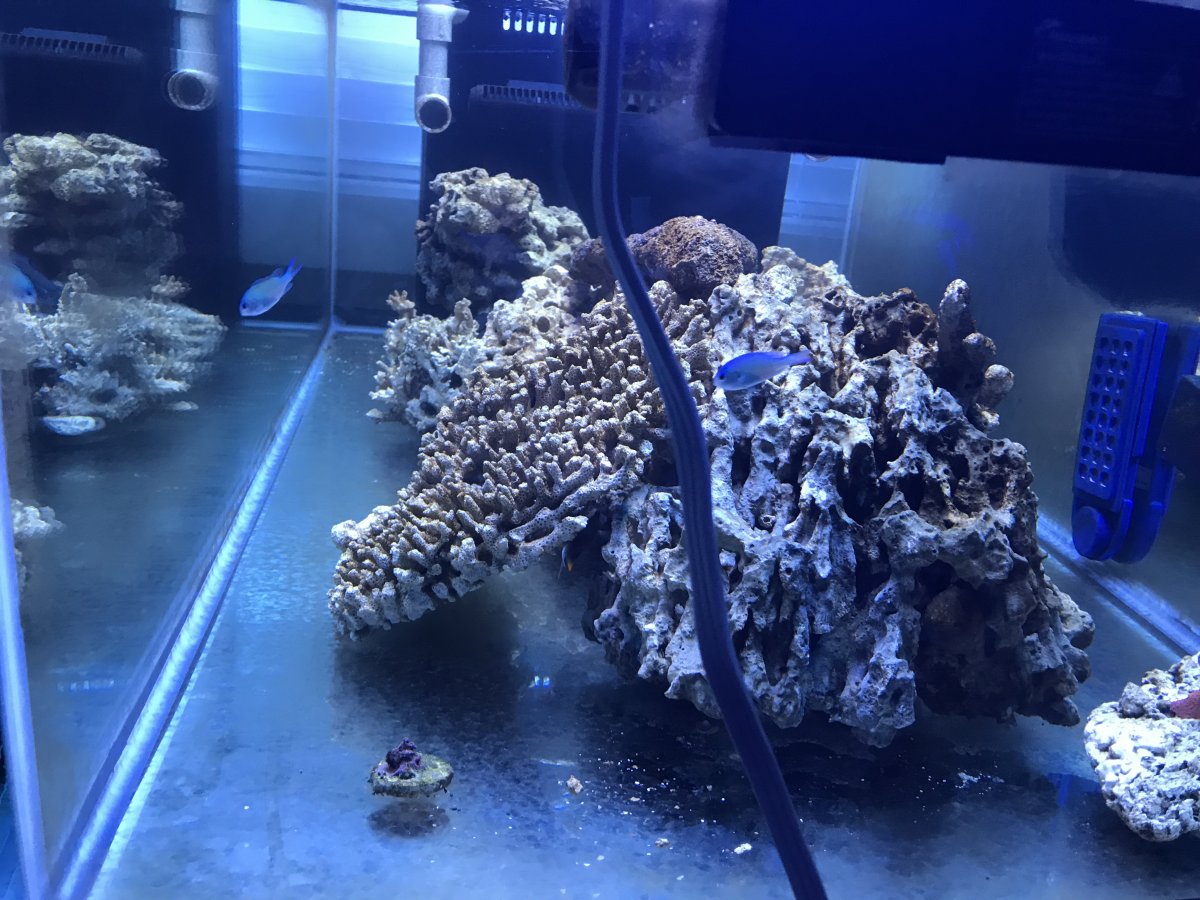 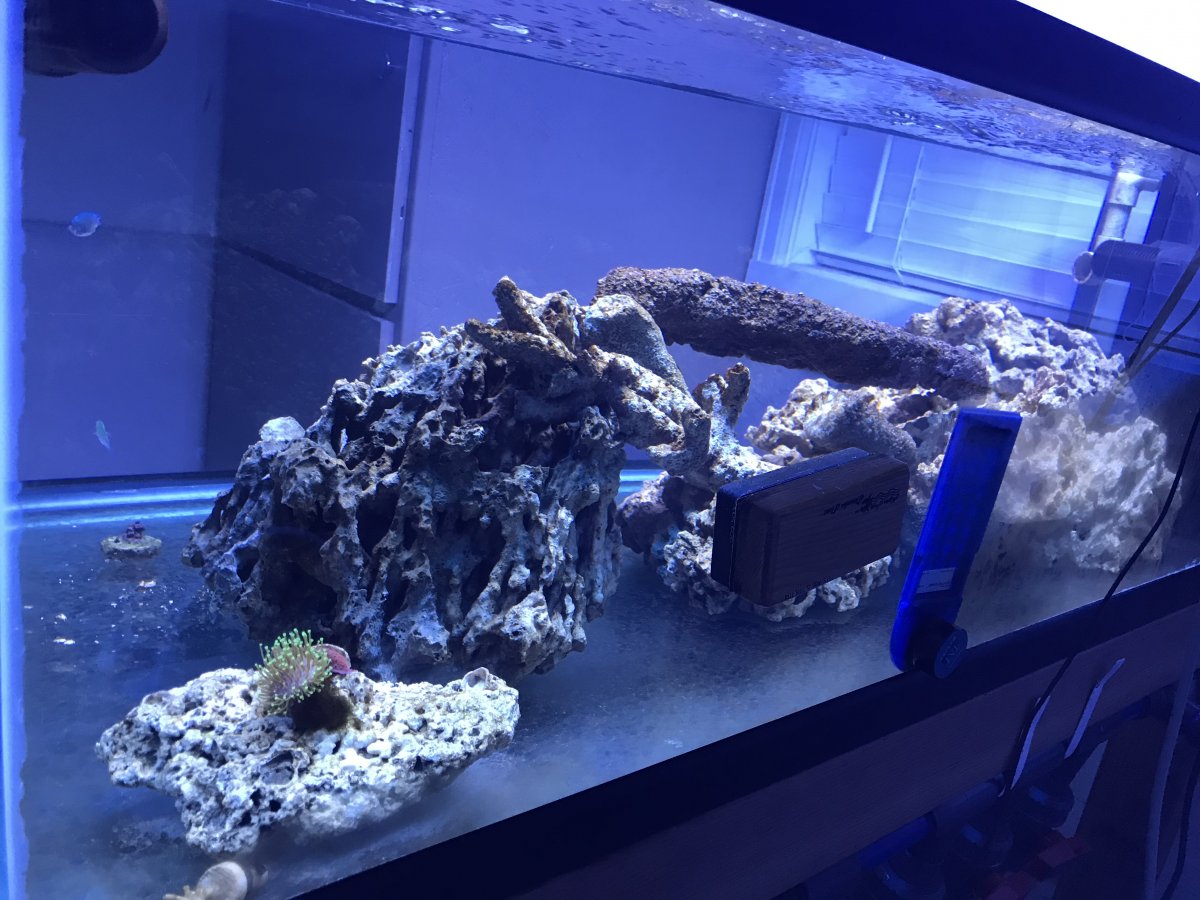 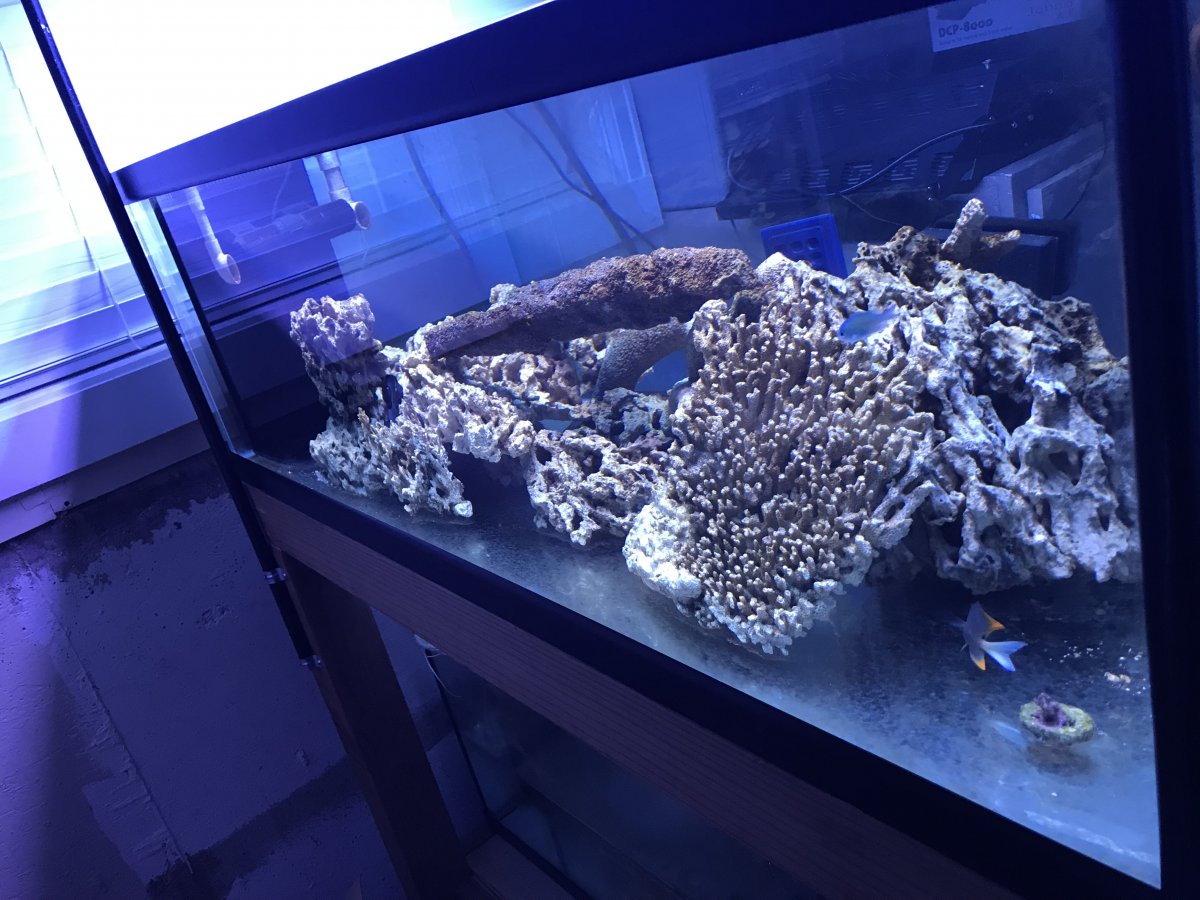 Started to get a huge algae bloom and with water changes and skimmer I couldn’t get it to go away. I went ahead and bought a UV sterilizer and it cleared up in two days. Skimmer went crazy as well.
I also found a little aiptasia connected to the corals I got so I cut it off. Thankfully I have three peppermint I know eat aiptasia so thankfully I’m not too worried about it but hopefully it didn’t spread...

If I can get anyone to reply I’d love to know what this is. Bryopsis or hair algae? Never really had bad algae. This bottomless tank is a lot tougher of a cycle. 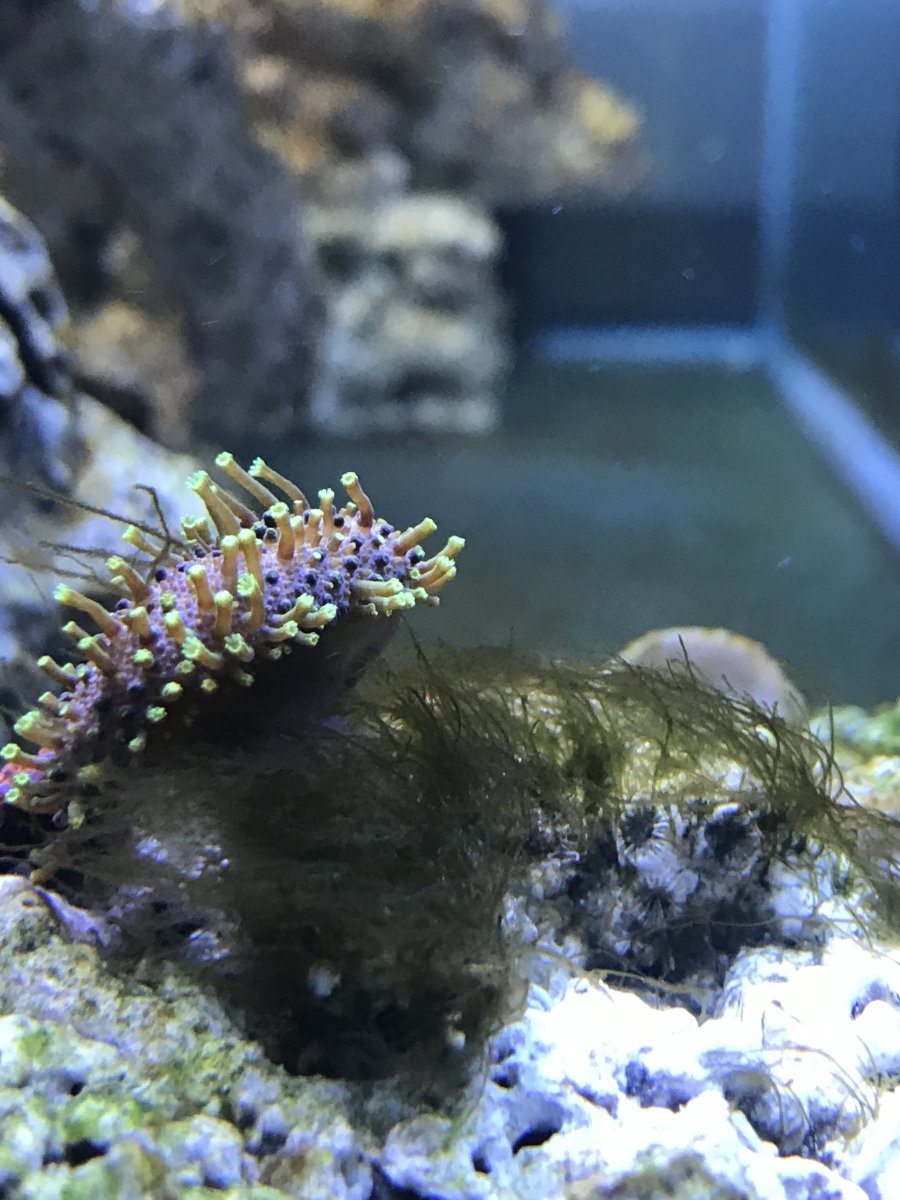 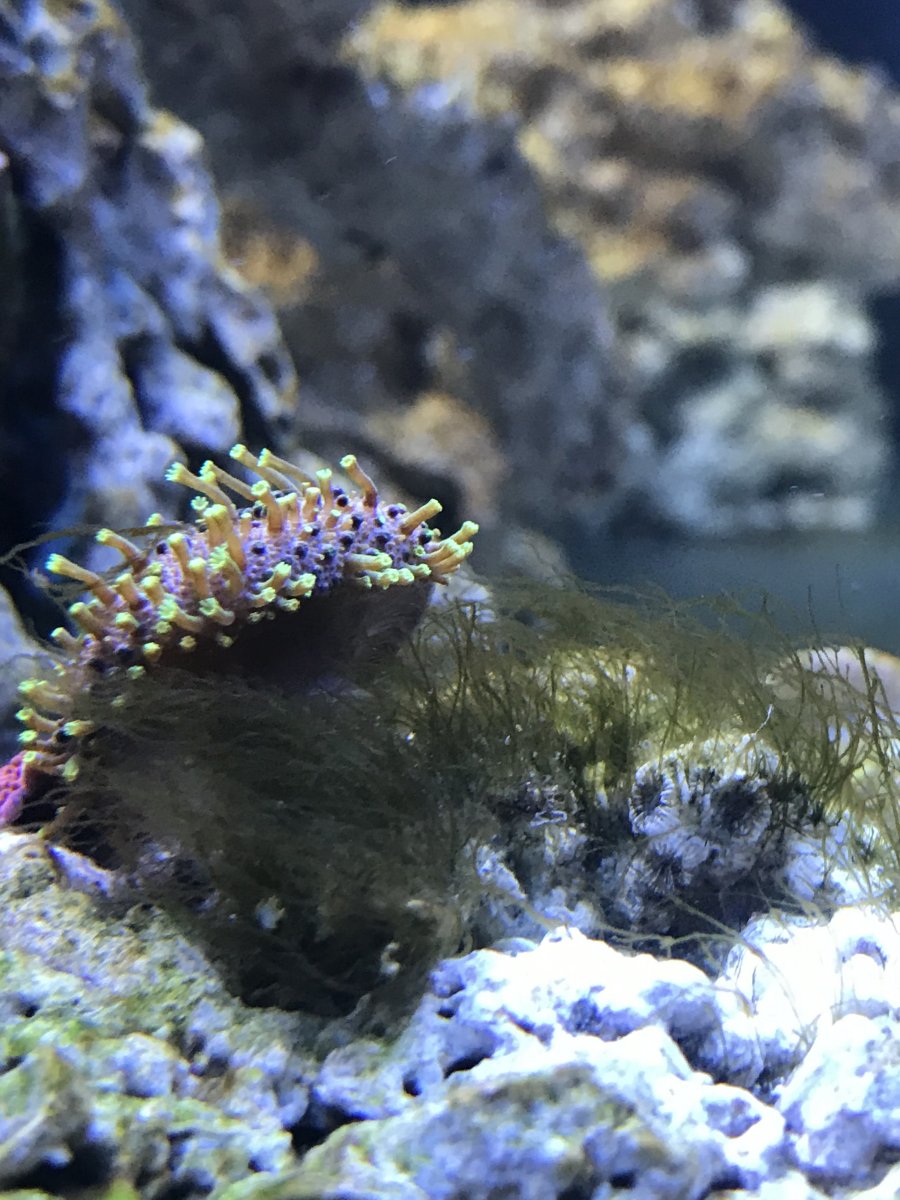 Looks like hair algae to me. Bryopsis has more fern like fanish growth if that makes any sense.
Love my 80 shallow. Same footprint. Have the deep blue with corner overflow myself. Lookin good and looks like took your time and did it right. I run an 8 bulb t5 with the middle bulbs removed (so 4 blue+ and 2 purple+) and orphek or120 bars in center. 1 uv and 1 blue sky. Couldn’t be happier!

Good snag on the UV. Which one did you opt for? I run the Jabeo 36w on mine. Added as a last resort to remove Dino from bottoming out nutrients. Should have been my first play as it beat it in 48 hrs and never came back. Probably would still be in the sps boat. But, I lost waaaay too many pieces and went back to LPS and zoas

Here’s how my lights are arranged. 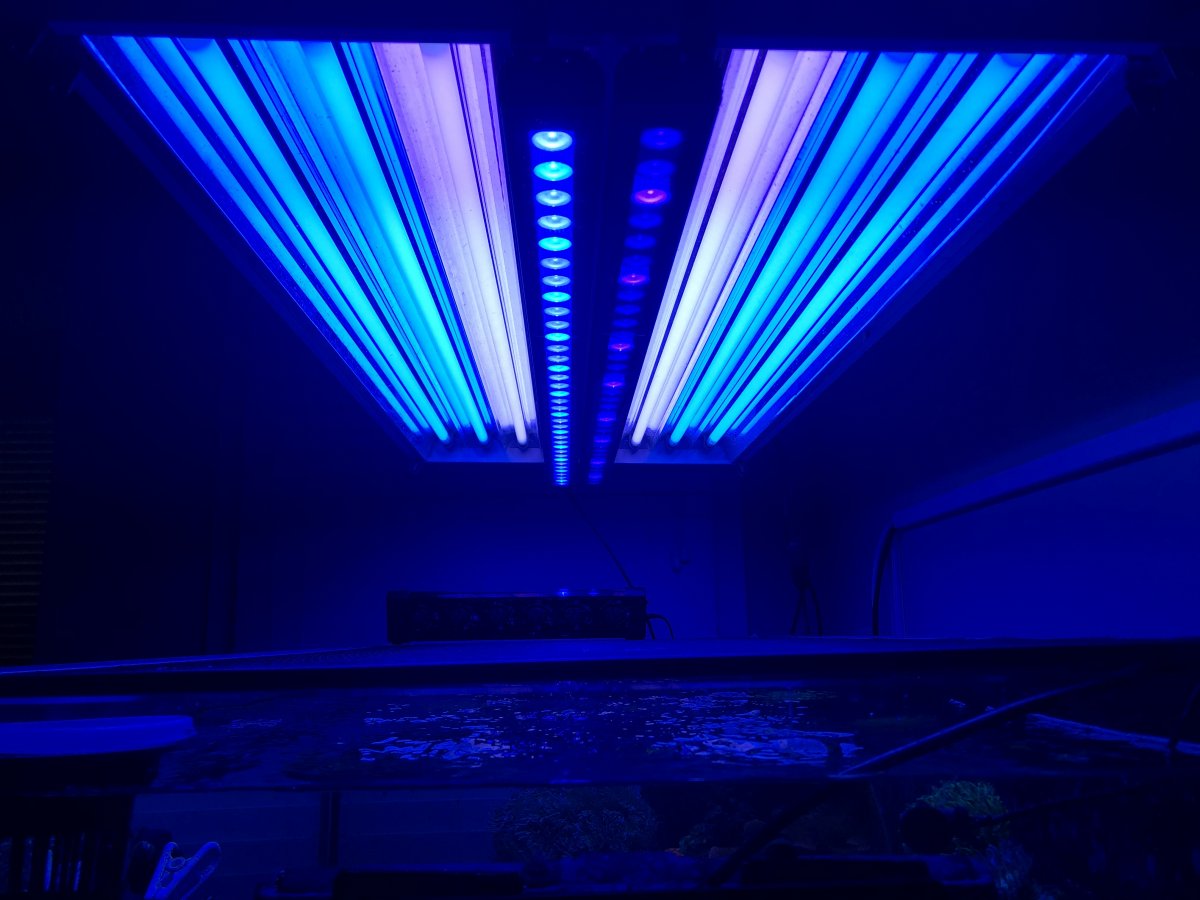 And one more question, whatcha got under the tank for filtration?
OP

ReeferMaddness843 said:
Looks like hair algae to me. Bryopsis has more fern like fanish growth if that makes any sense.
Love my 80 shallow. Same footprint. Have the deep blue with corner overflow myself. Lookin good and looks like took your time and did it right. I run an 8 bulb t5 with the middle bulbs removed (so 4 blue+ and 2 purple+) and orphek or120 bars in center. 1 uv and 1 blue sky. Couldn’t be happier!
Click to expand...

I know exactly what you mean, I couldn’t see any myself but my fangs aren’t touching it and not sure if fans come with maturity or something haha. Glad you love the footprint, I’m really happy with it. I’m thinking about keeping the 6 bulbs and some how incorporating 160 kessils later on for shimmer. Then again I love how I can pull my phone out and take perfect pictures. Right now I have a 110int reef octopus skimmer and the jebao 36watt I’ve sterilizer! I have a a160 algae light but I’m waiting to put the chaeto in till the tank can handle the bio-load. Maybe that’s bitting me in the butt though.
I just switched my main tank from CaRx to 2 part and lost a lot of my sps. They are starting to normalize but I’m worried about transferring everything over... wife is pushing me to do it ASAP and I’m trying to delay it as long as possible haha.

Tank is going thru a real bad ugly phase. This shift has been a lot busier then normal and the tank hasn’t been touched much. Spending the weekend resurfacing our hardwood floors so after that I plan on getting some chaeto for the tank and killing the main lights for a few days to hopefully let the chaeto take ahold of the nutrients. Clean out the skimmer cup that’s gone crazy and do a big water change. I’ll try to get photos of it’s ugliness tonight.
OP

I’ve done horrible at updating the tank and in general just tending to the tank itself. Prepping for a baby is a lot! Took awhile but refinished all the hard wood floors and new carpet installed throughout the house. Now that this is done the wife as told me I’ve only got a few small things to do. Hopefully that’s true and I can start to really pay attention to this beauty. Part of doing the carpeting was tearing down my old tank and transferring it to this tank. The tank is not ready for the bioload and all the corals. To help with this I’ve been dosing amino acids and and transferred some of the love rock over. I really didn’t want to do this due to bubble algae but I gave while transferring corals and realizing I couldn’t get it all off. So now the tank has all corals transferred in and everything is looking great as of now. Now for some pictures! 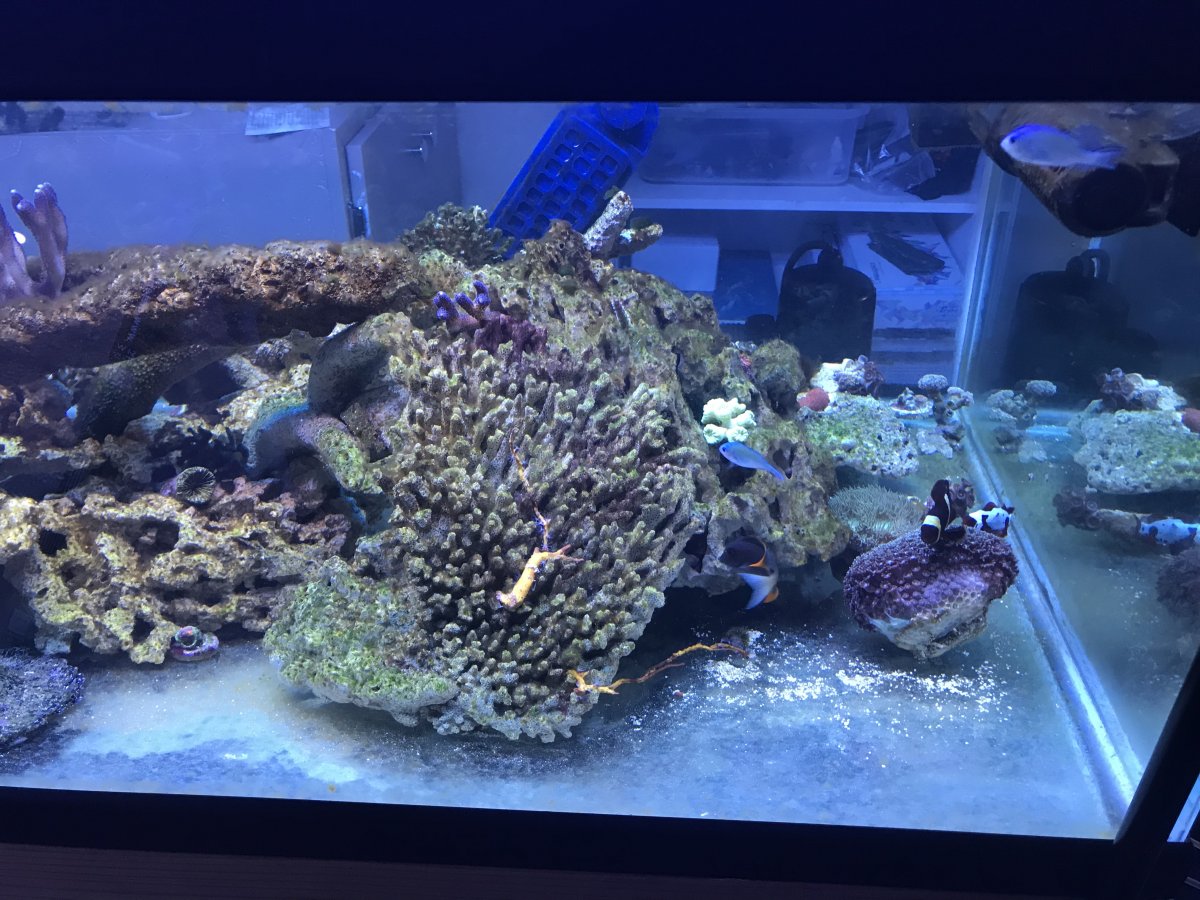 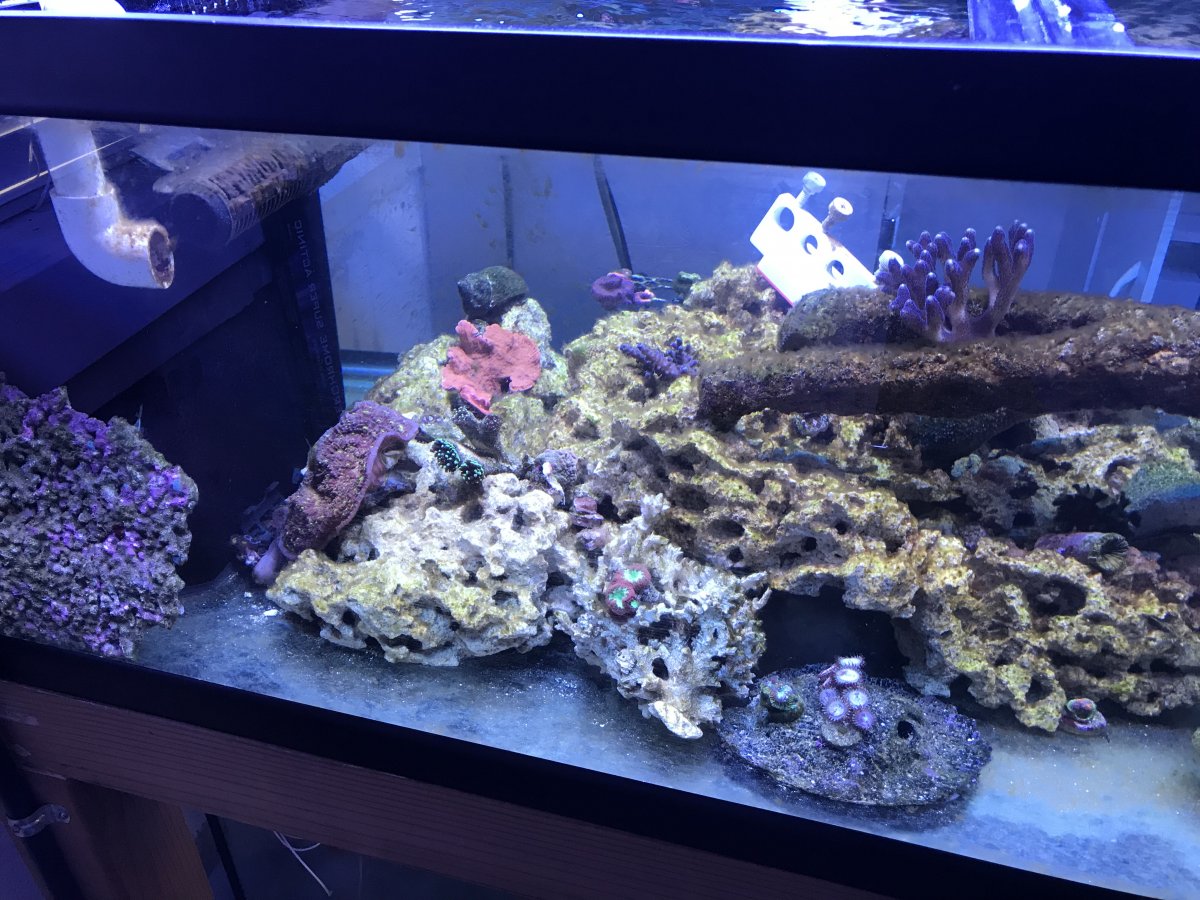 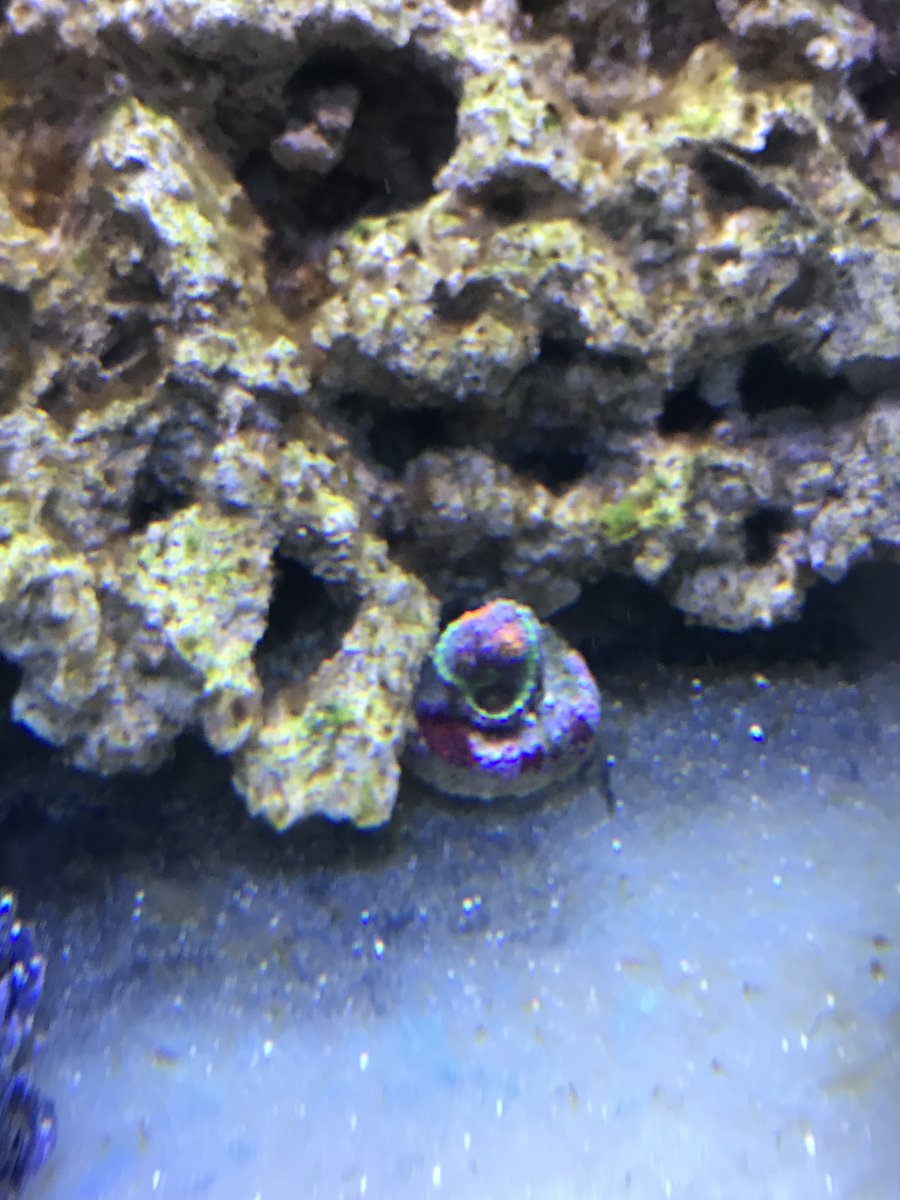 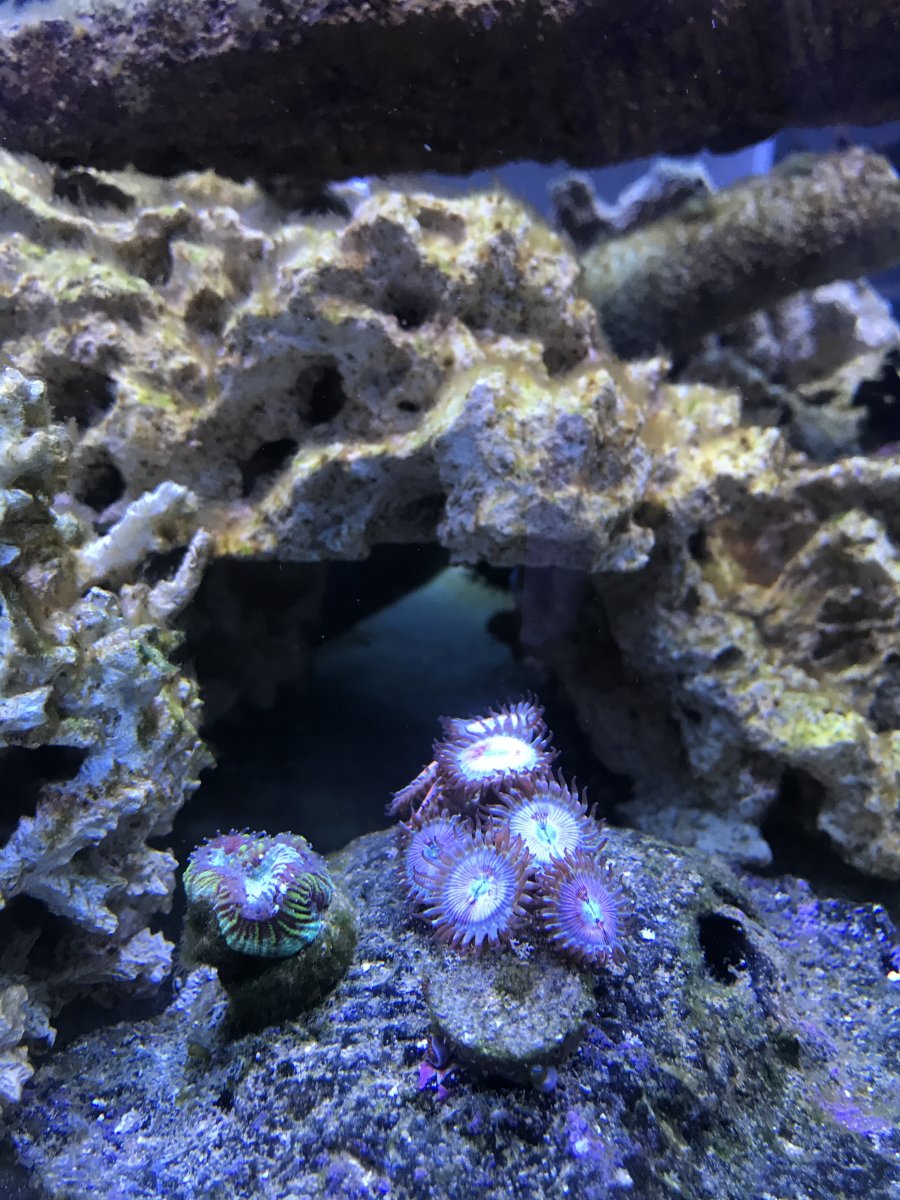 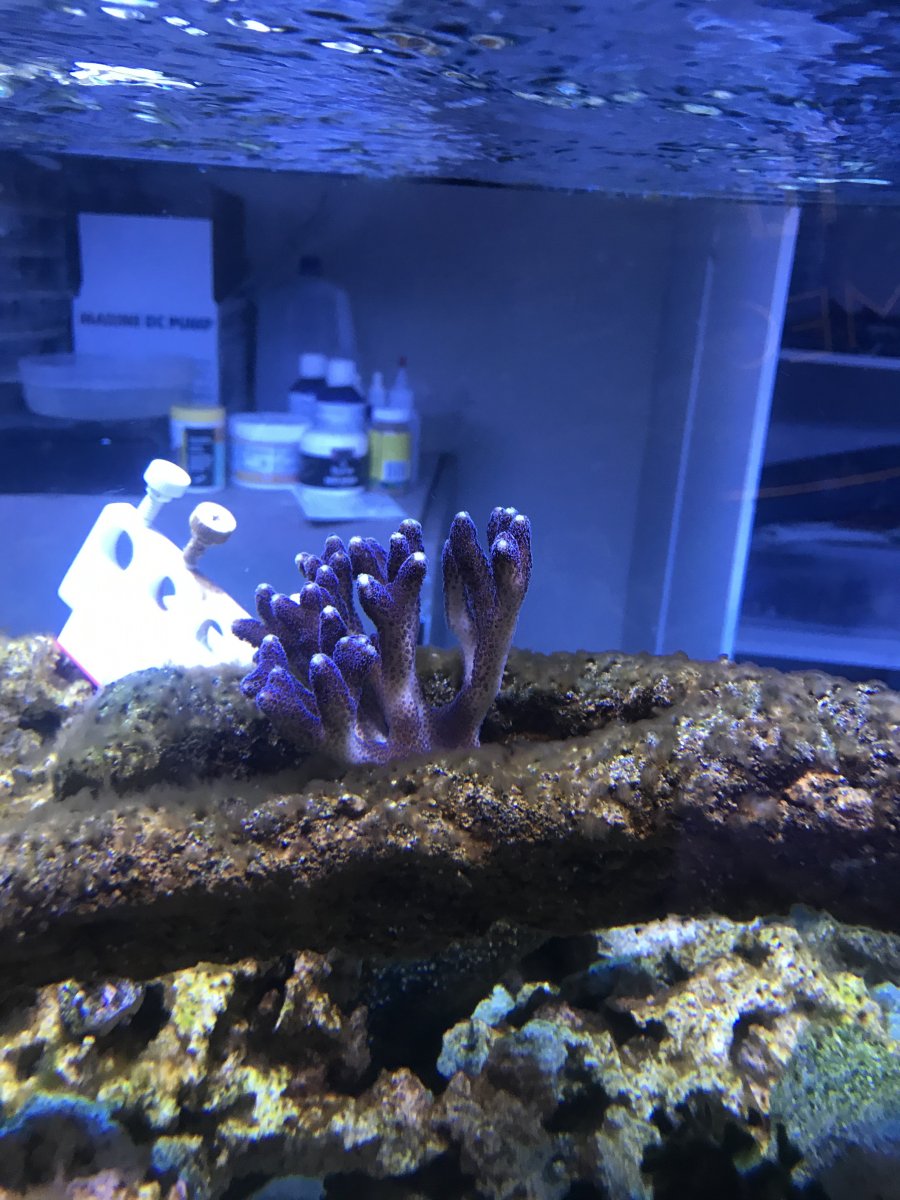 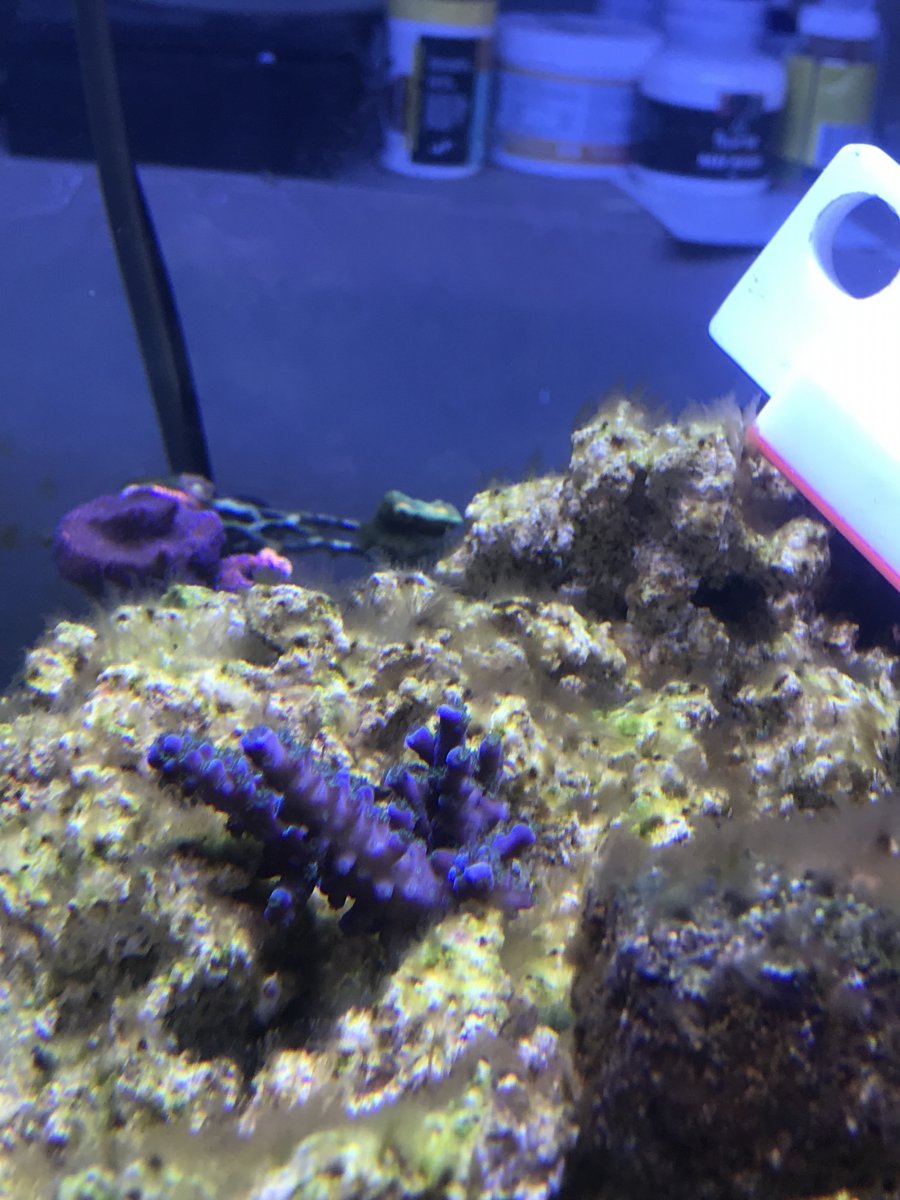 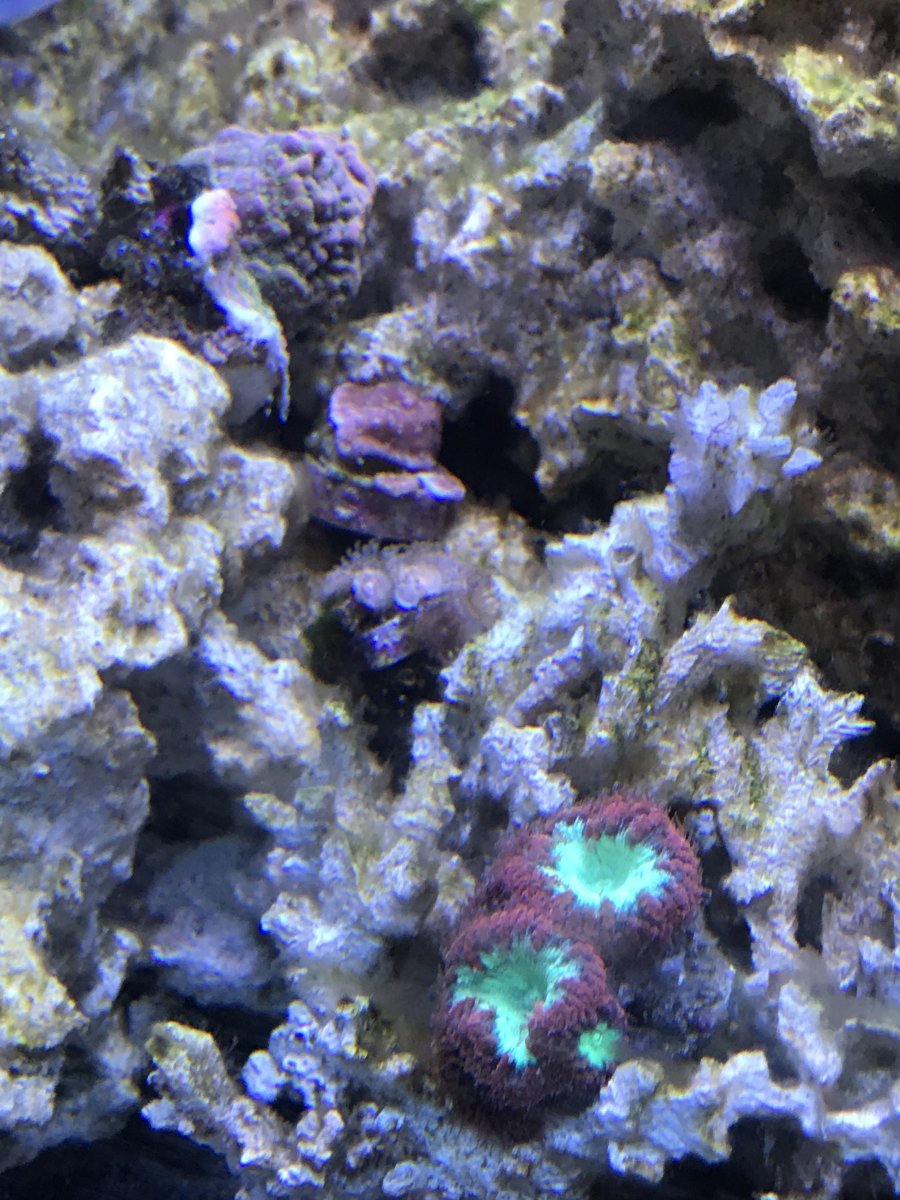 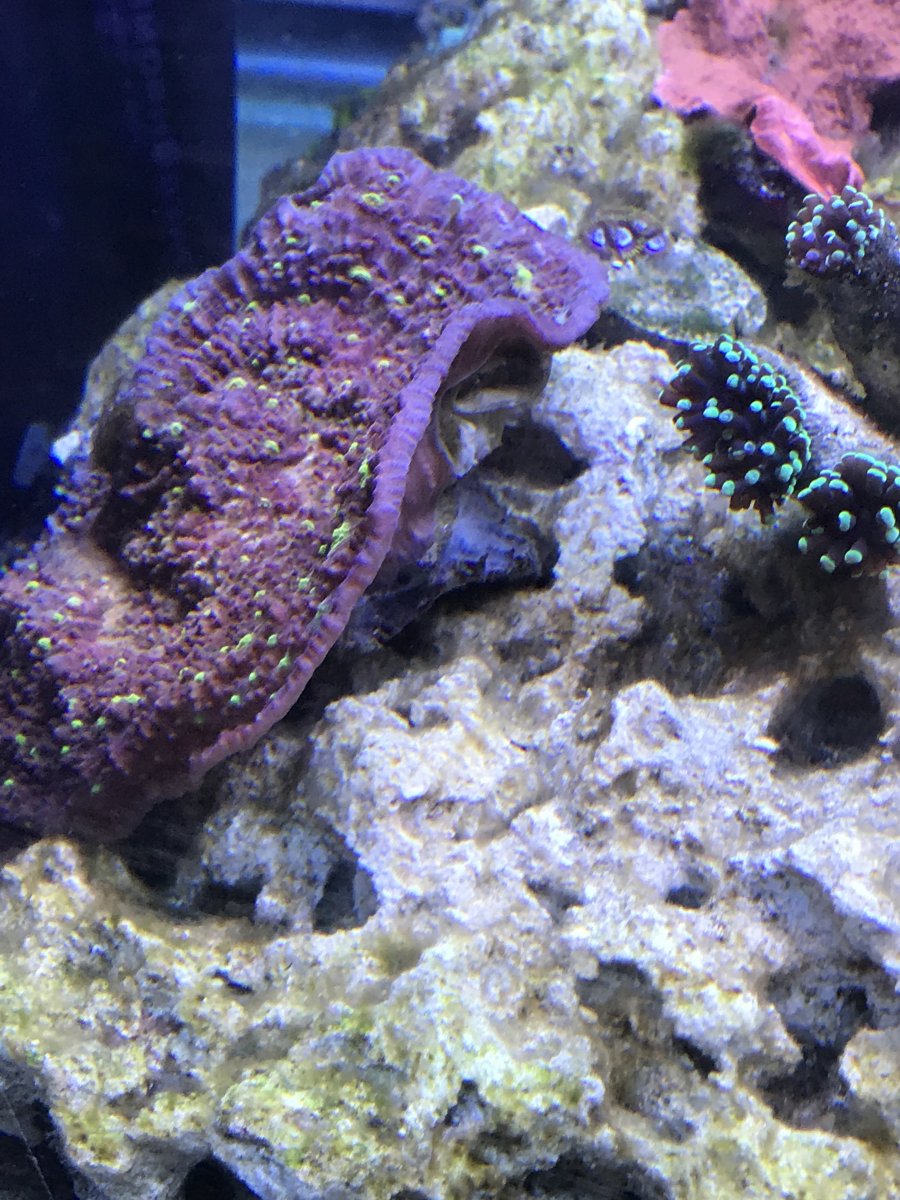 Guess I should explain why the probe holder is just thrown in the tank haha. It was in the sump and covered in micro brittle stars and pods so I just threw it in to let them come off when they pleased.
OP

This is an example of the rock that I transferred from the old tank. 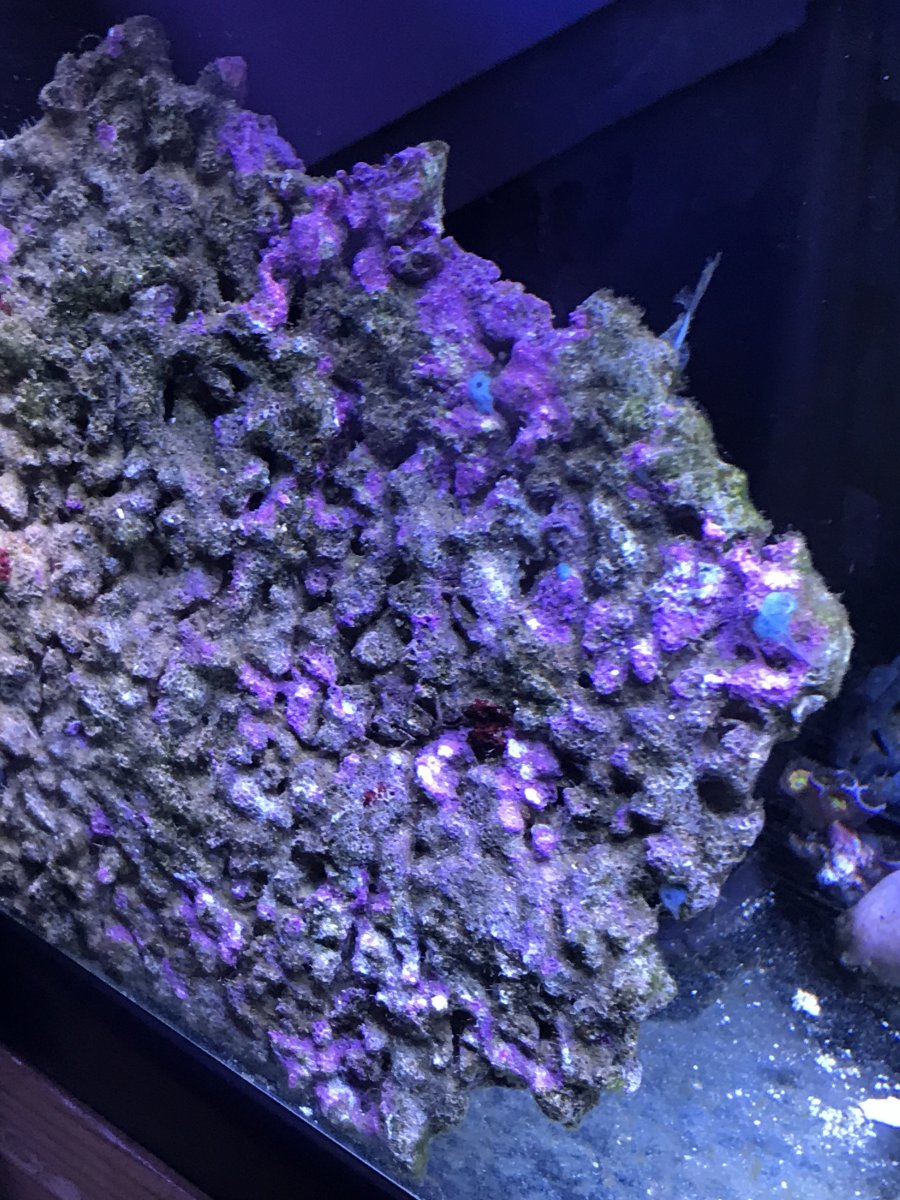 These T5 bulbs are amazing for pictures. It’s the truest color I’ve ever been able to get without editing or filters. 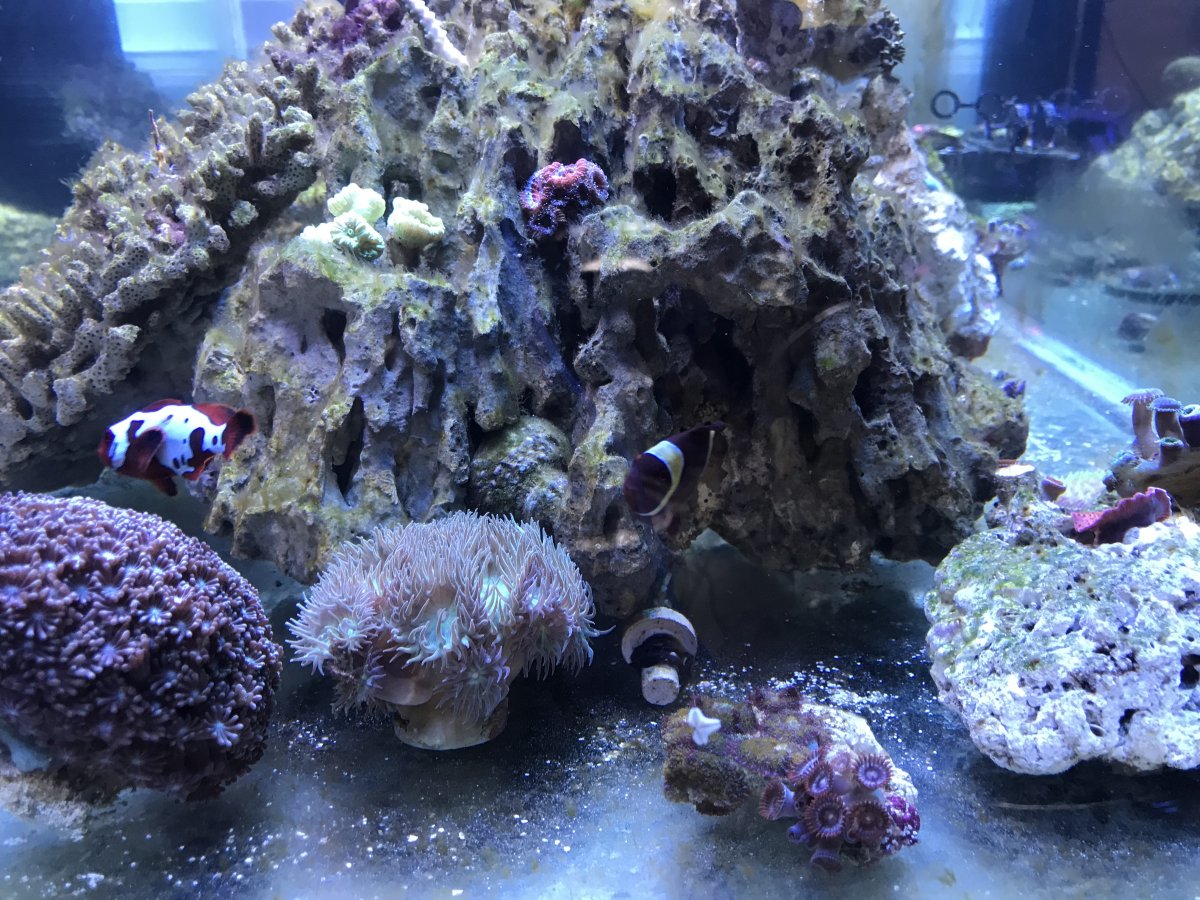 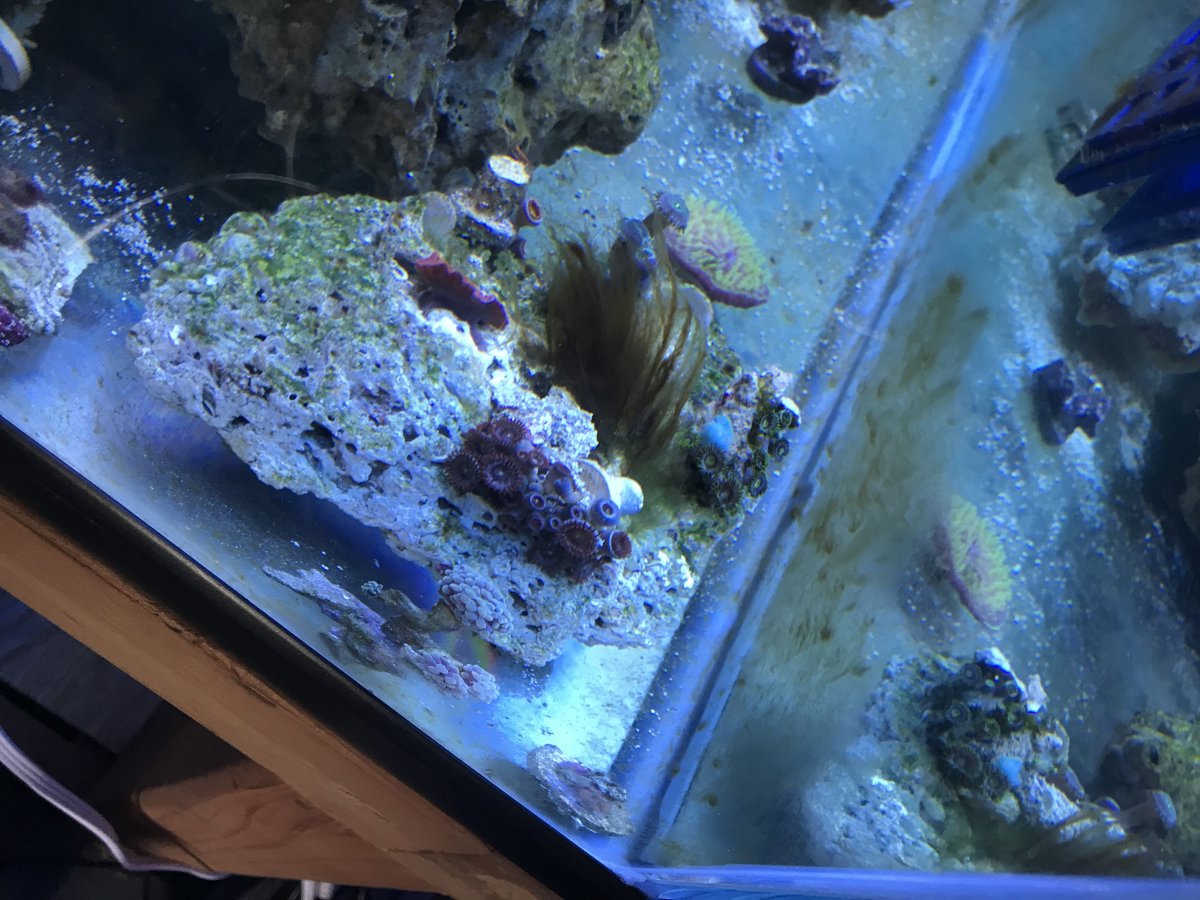 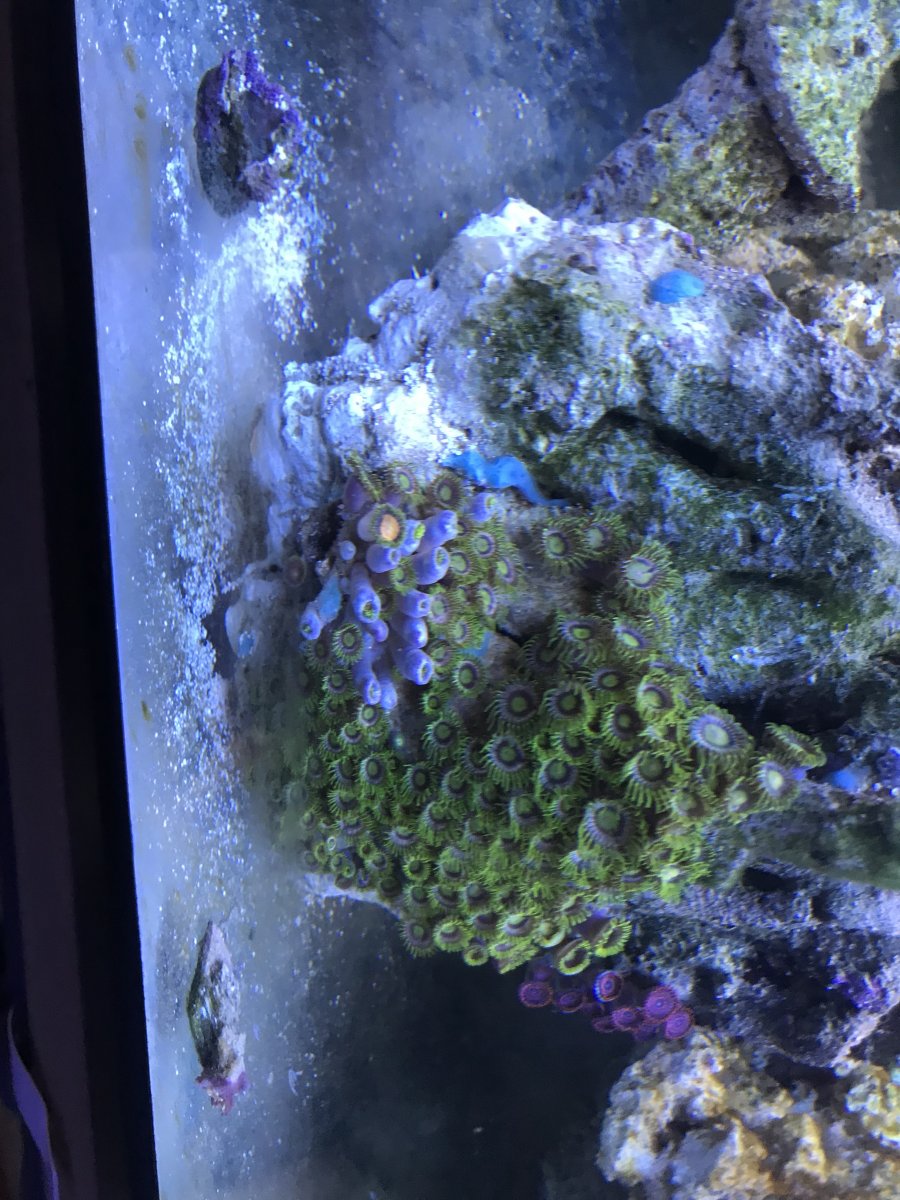 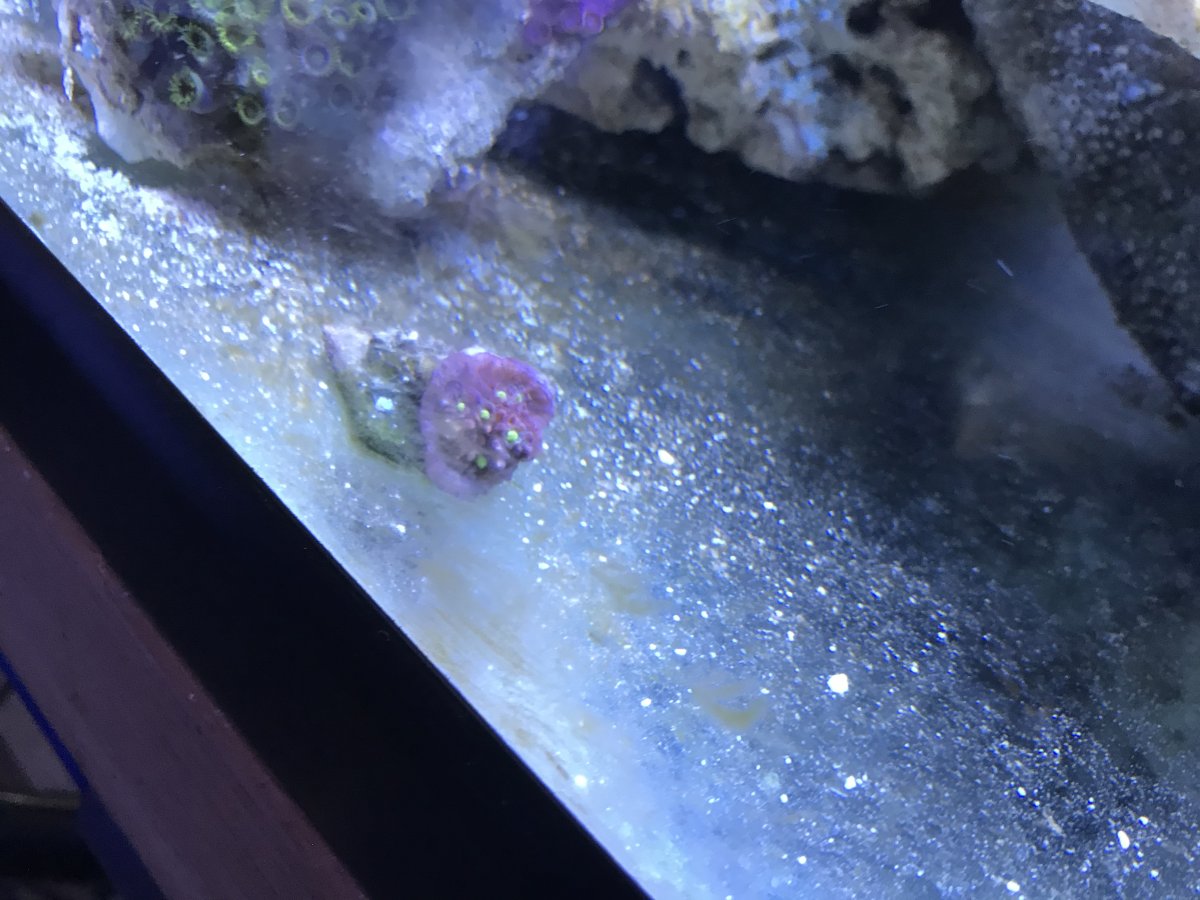 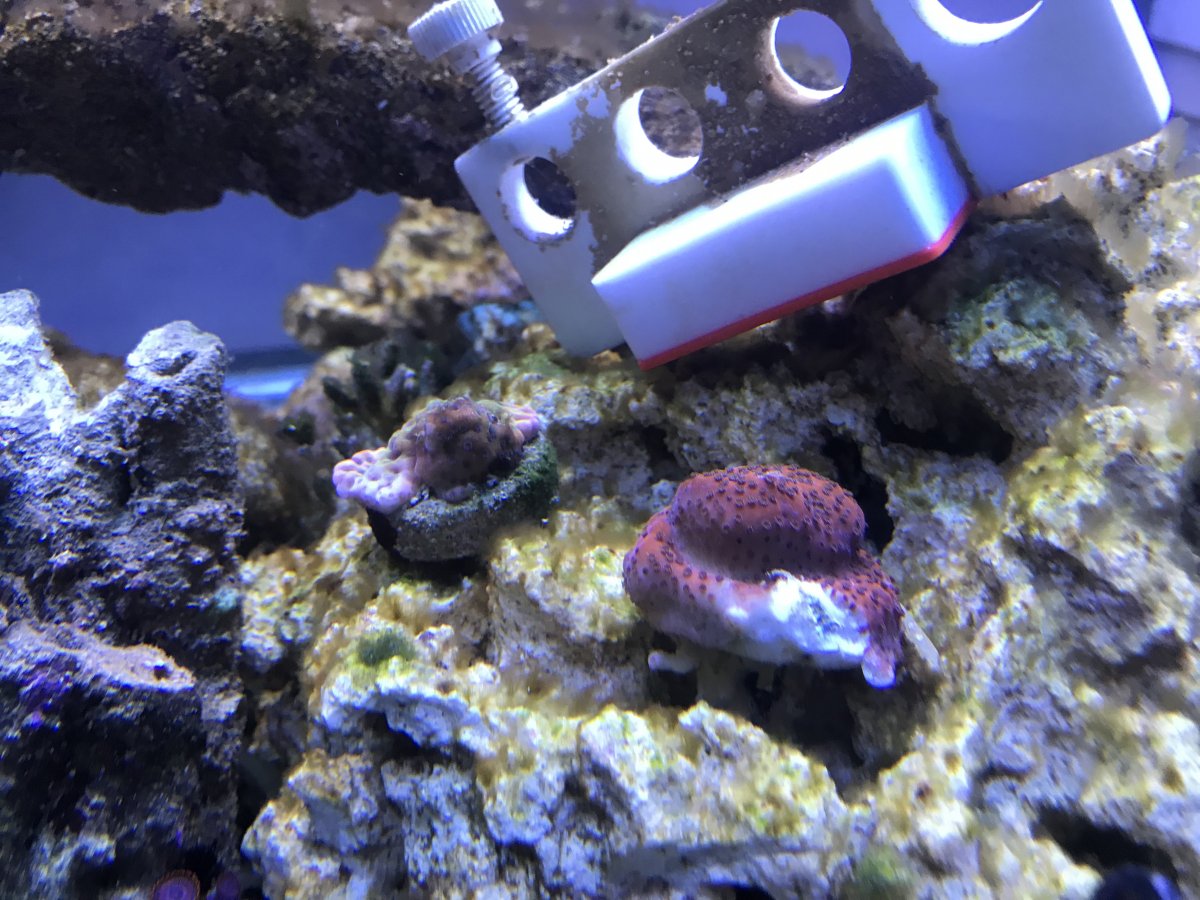 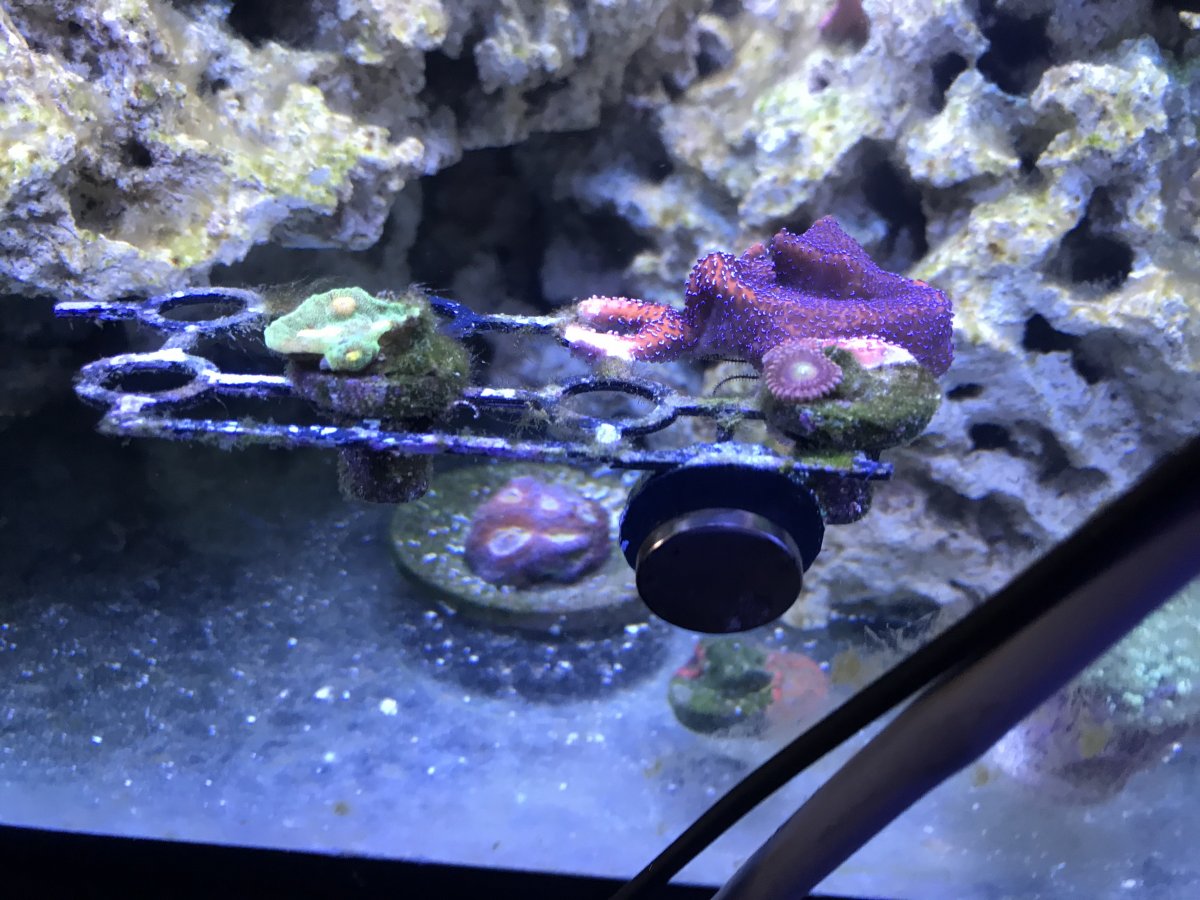 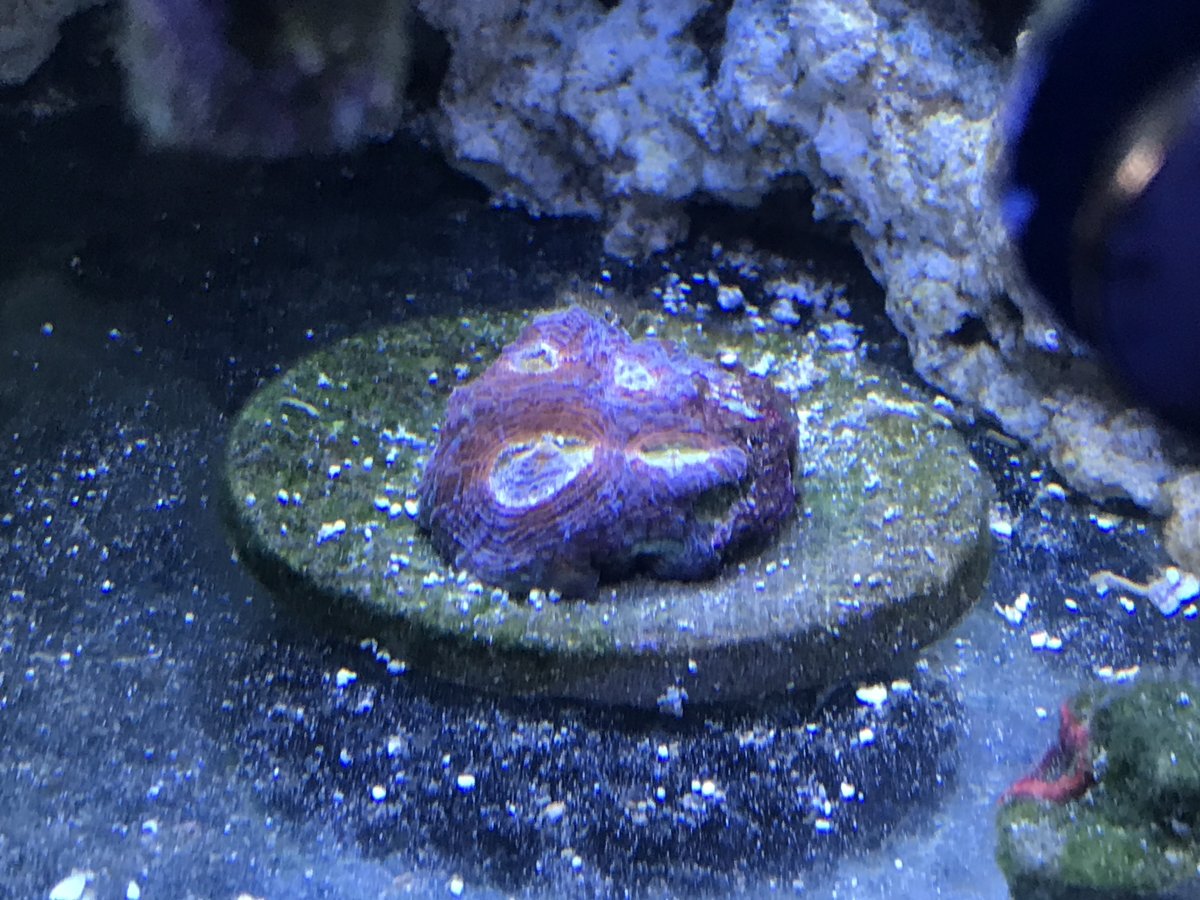