I have been planning to add on to this system for a while now, to give me more room to separate things. My current frag tank kinda developed into a BTA tank anyways and I need somewhere to grow out some other things.

Picked up a used lowboy locally this weekend. Currently deciding how to plumb this into my existing system. Lots of ideas going around still. Original plan was to place it under the window, but there are some caveats:
Equipment planning (subject to change -- as always):
No filtration needed as I'm going to plumb into the existing -- somehow. Kind of want to add a large fuge under the frag system too. Maybe a Tuff Stuff stock tank or Husky tote. Or a 40 breeder. I prefer to use a rubbermaid stock tank, but sadly it's just too big for this area. I'm also considering consolidating my return pumps, as this current plan will end up with 3 separate returns. 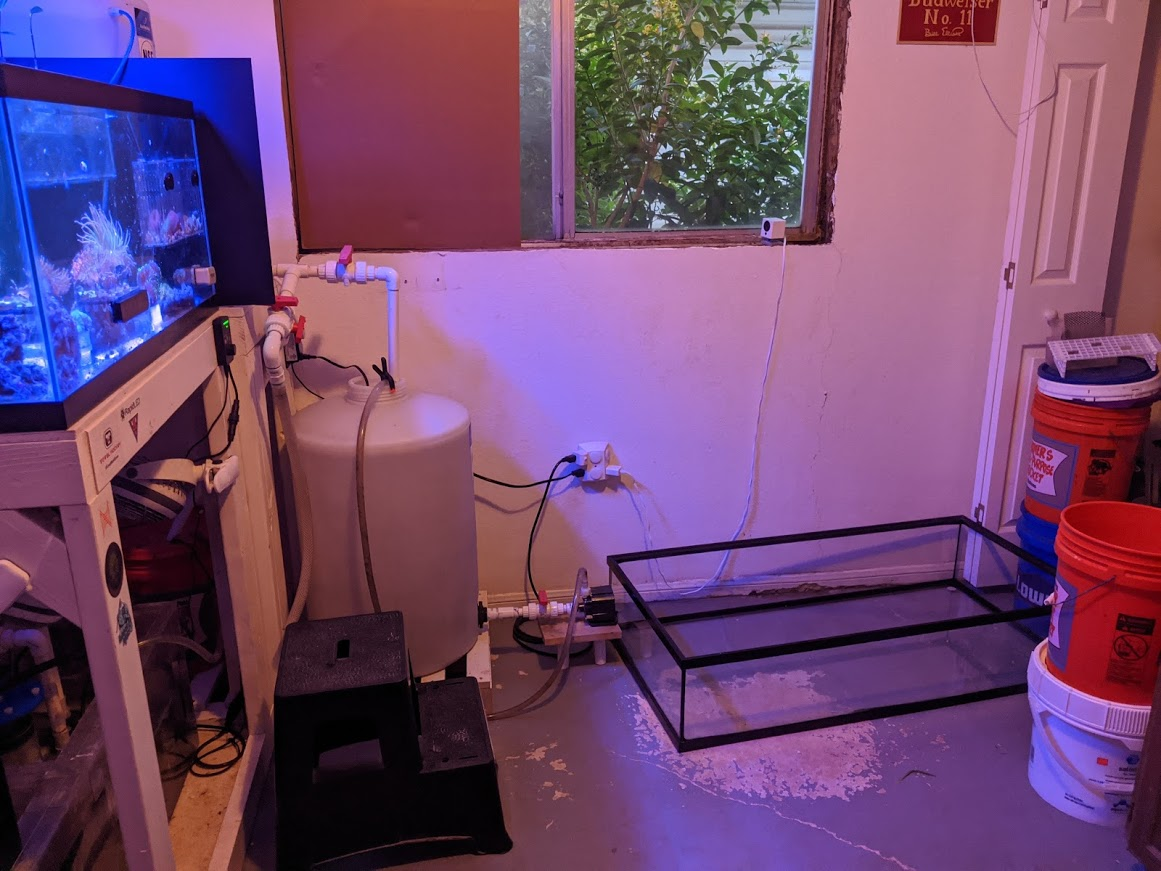 Existing setup, plus display on the other side of the wall: 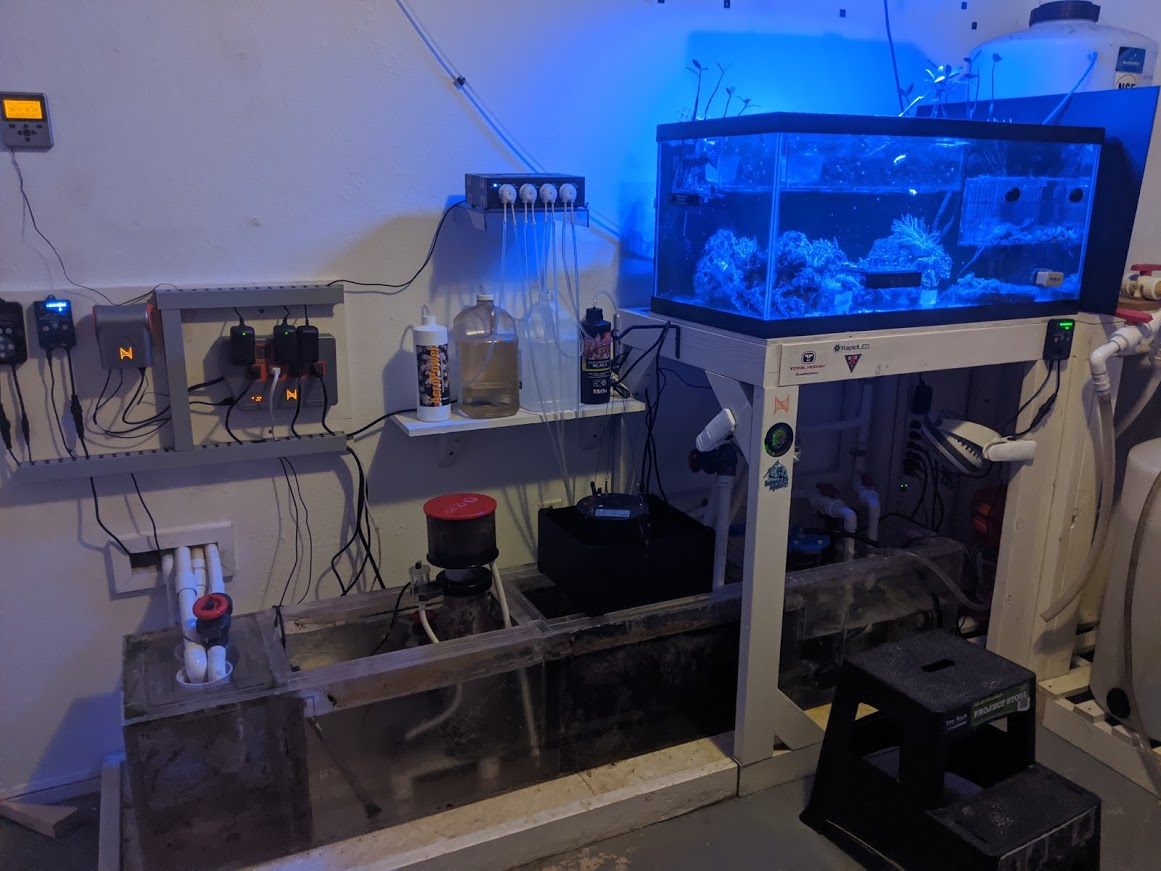 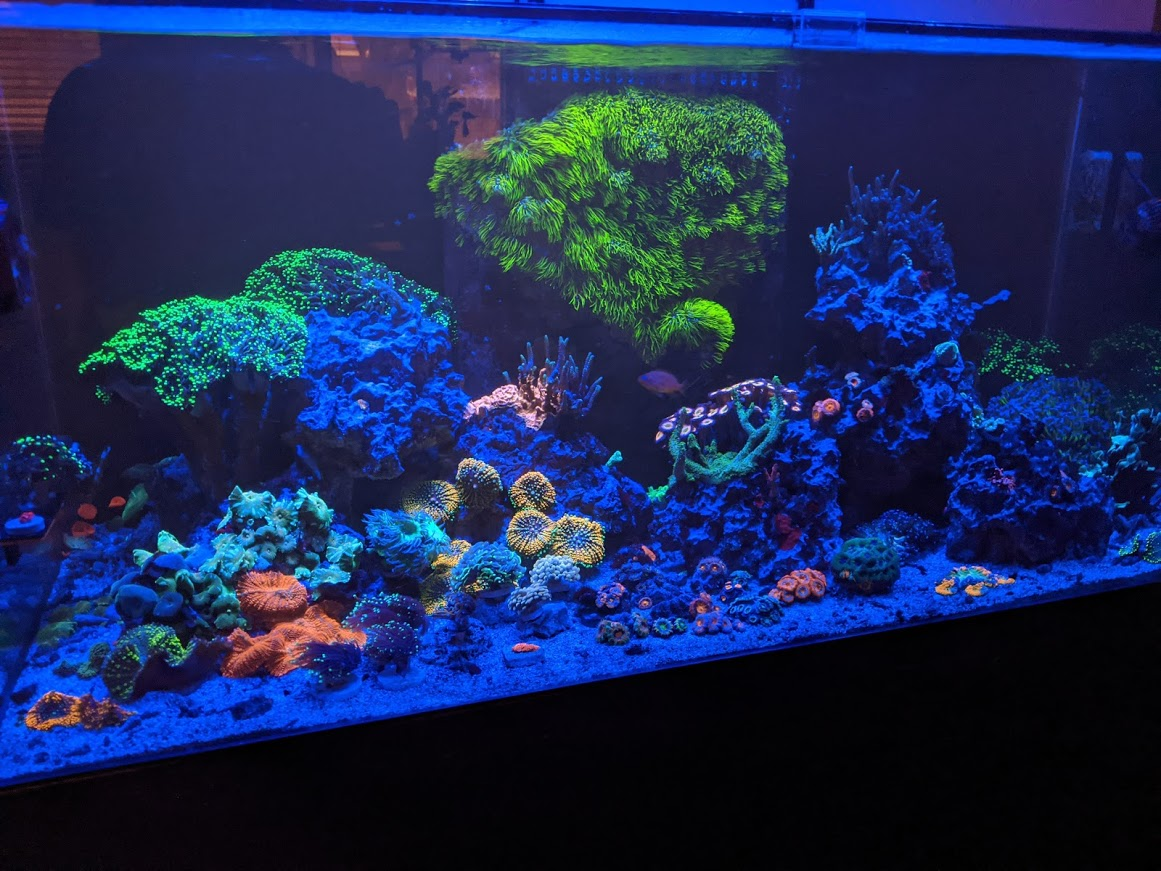 I don't have much progress to add to this yet as the exterior wall of my home needs to be rebuilt first. I am planning that now so I can get my lagoon setup!

In the meantime I was in need of new lights for my 40 breeder and unfortunately ALSO for my 105g display. I had purchased a pair of noopsyche k7 pro for the lowboy but decided to put them up over the nem tank. Good color, shimmer, and most importantly output.

Here are some PAR readings - at no more than 50%! I have not tested full power on these yet. They have a good punch and the spread is noticeably better than my old fixtures. So far everything has responded favorably. 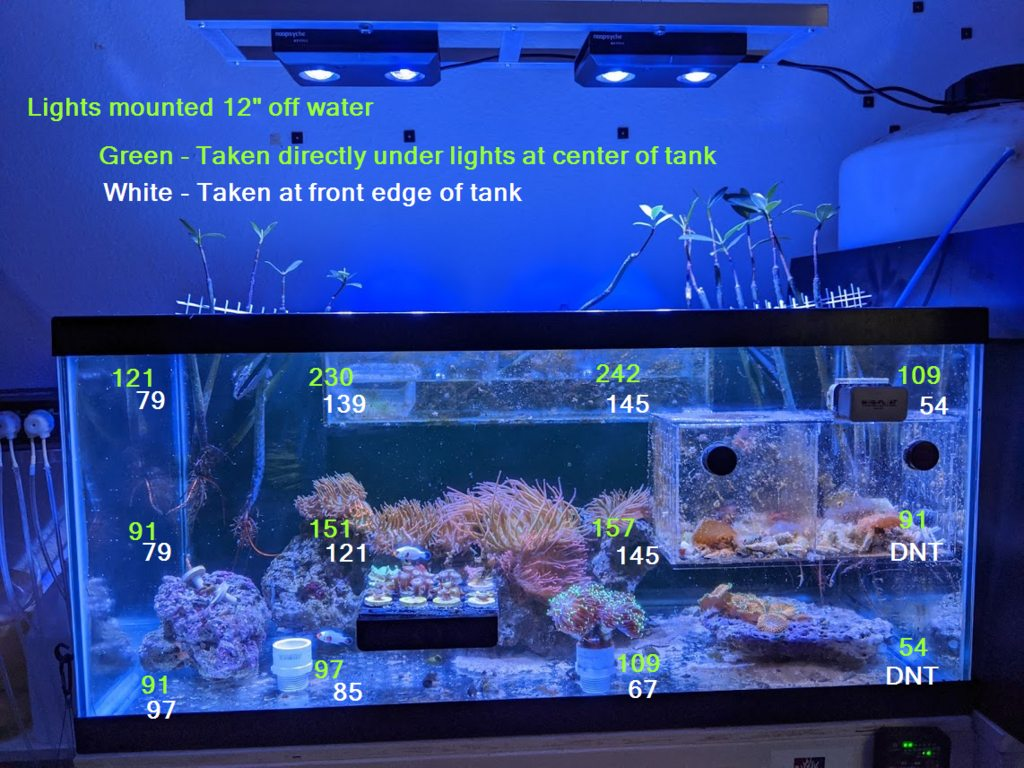 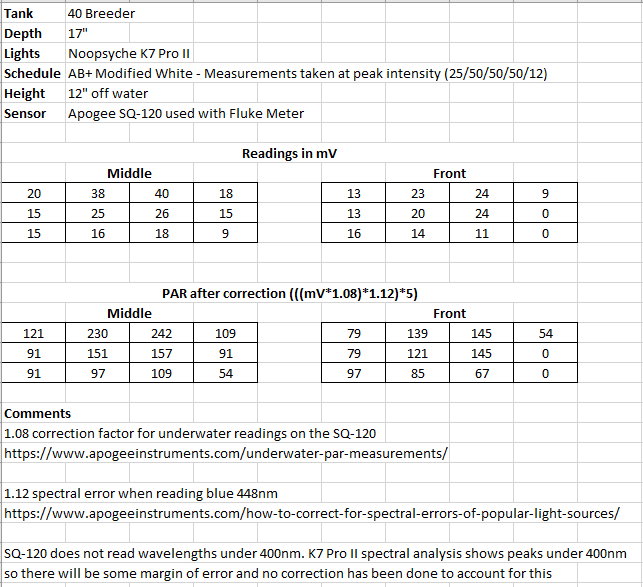 I will be redoing the siding on the rest of this wall probably next year, but for now I addressed the critical part which was the reef room wall.

Sump/frag tank in quarantine too 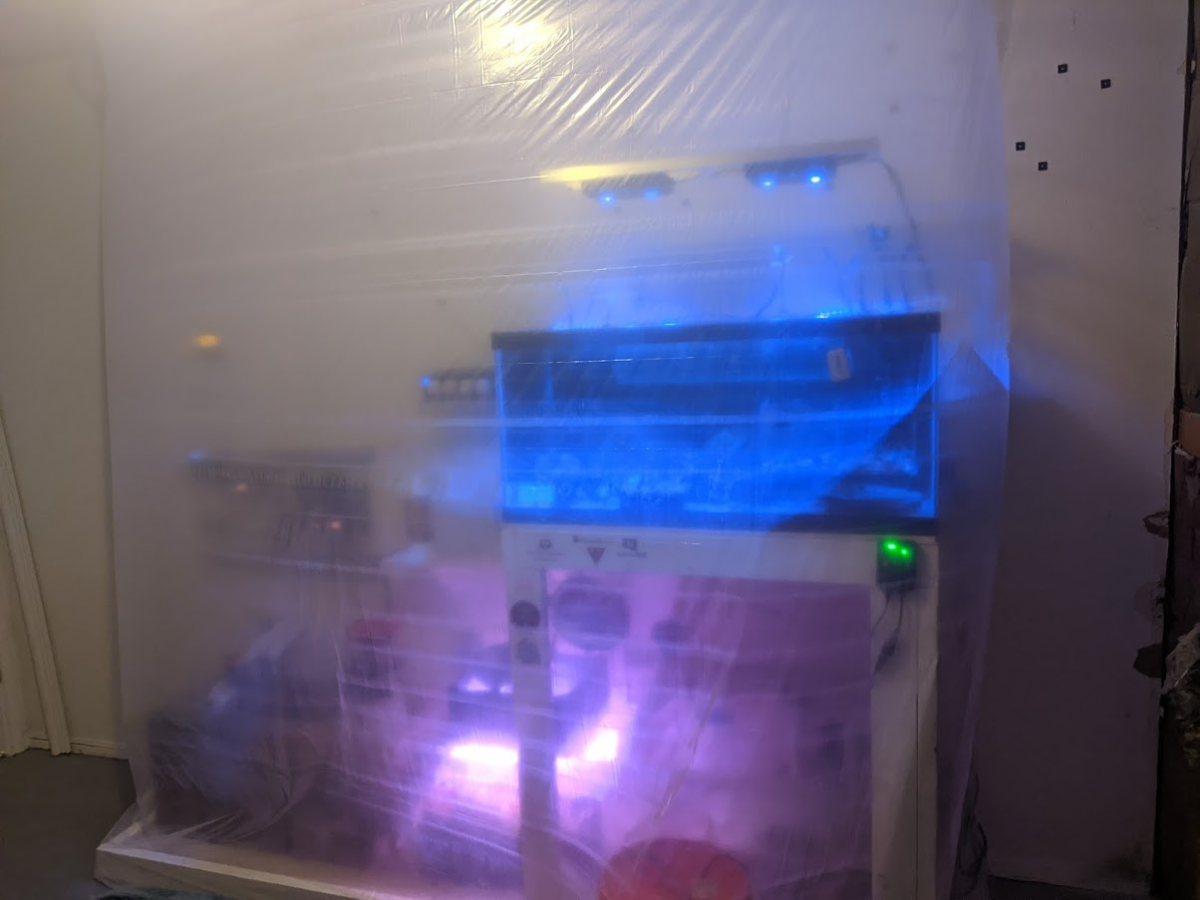 The best before pic I had...my wife had already started tearing things off 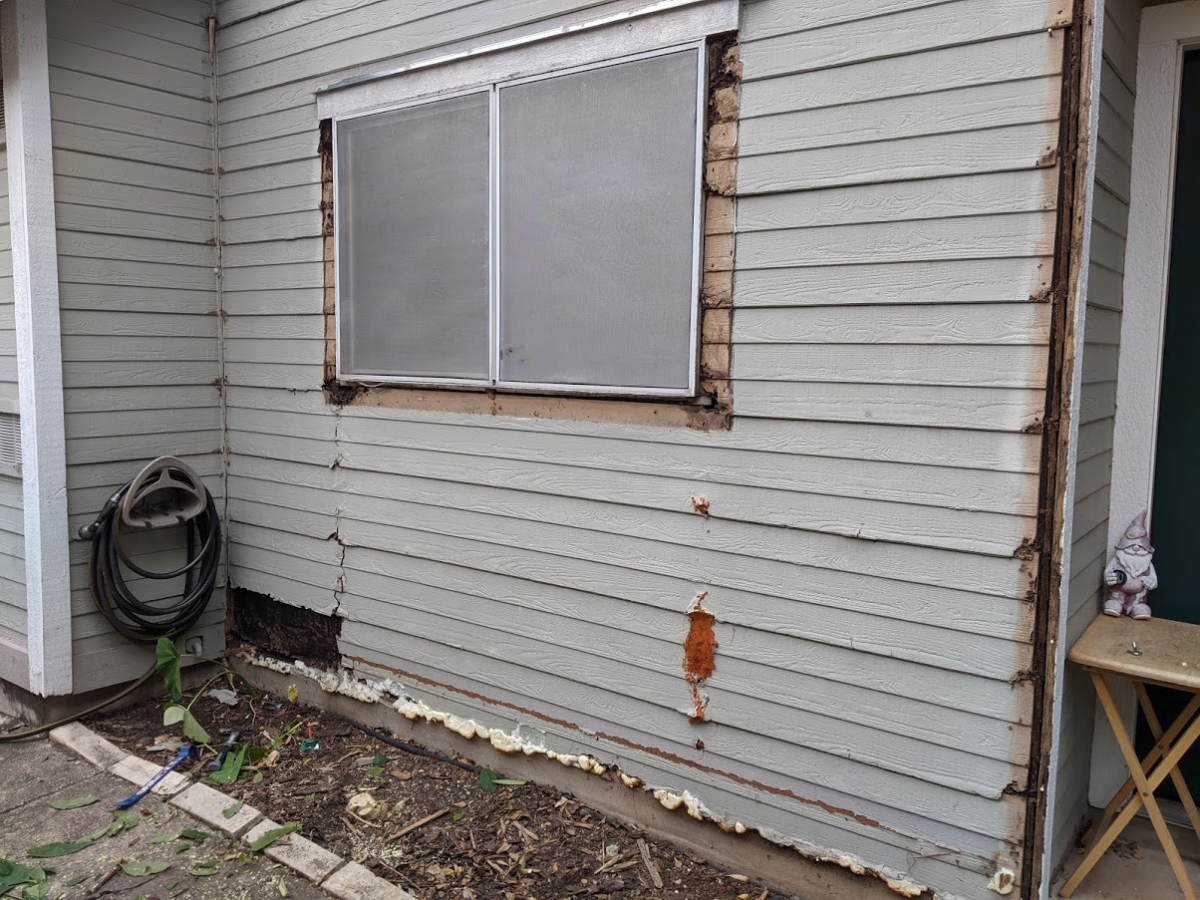 Hey where did the wall go? 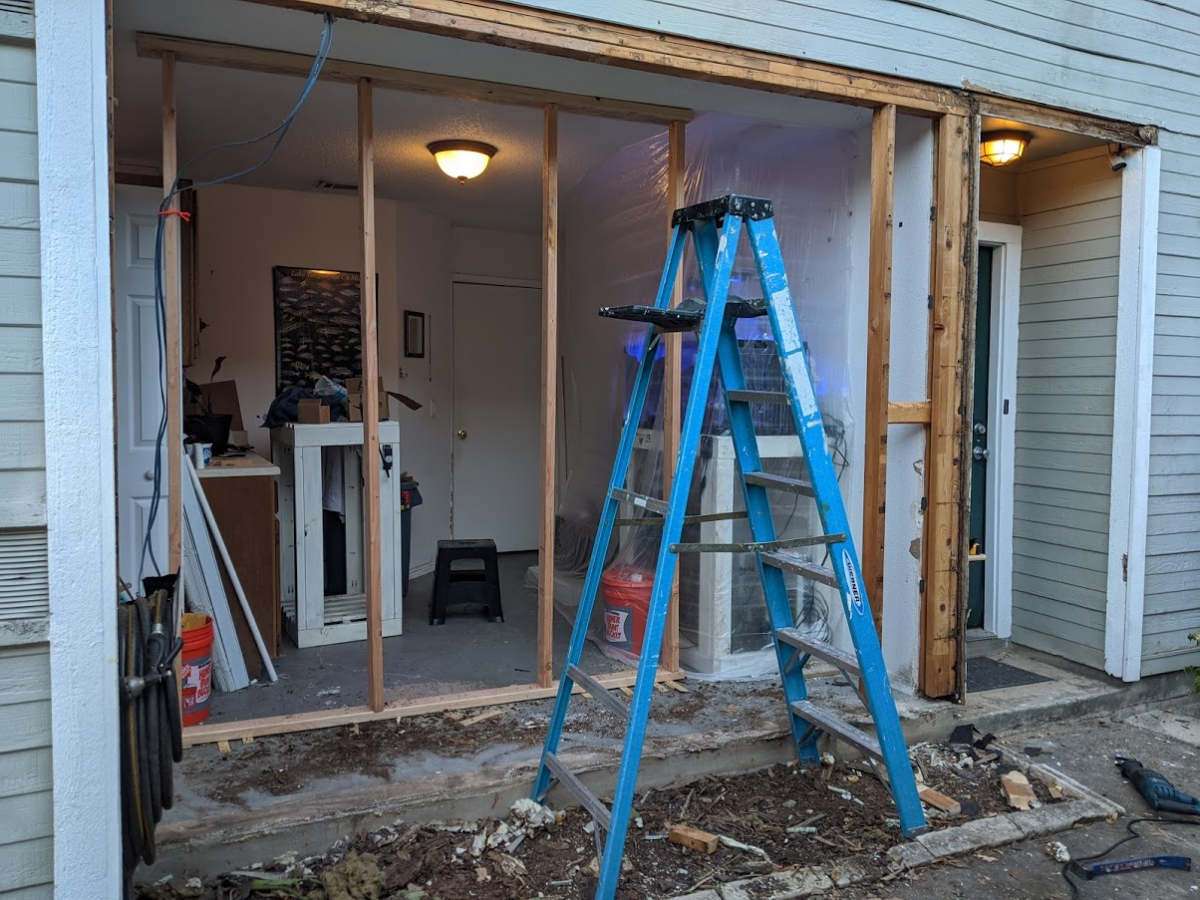 Ran out of time on day #1..club reef is open for business, one day only 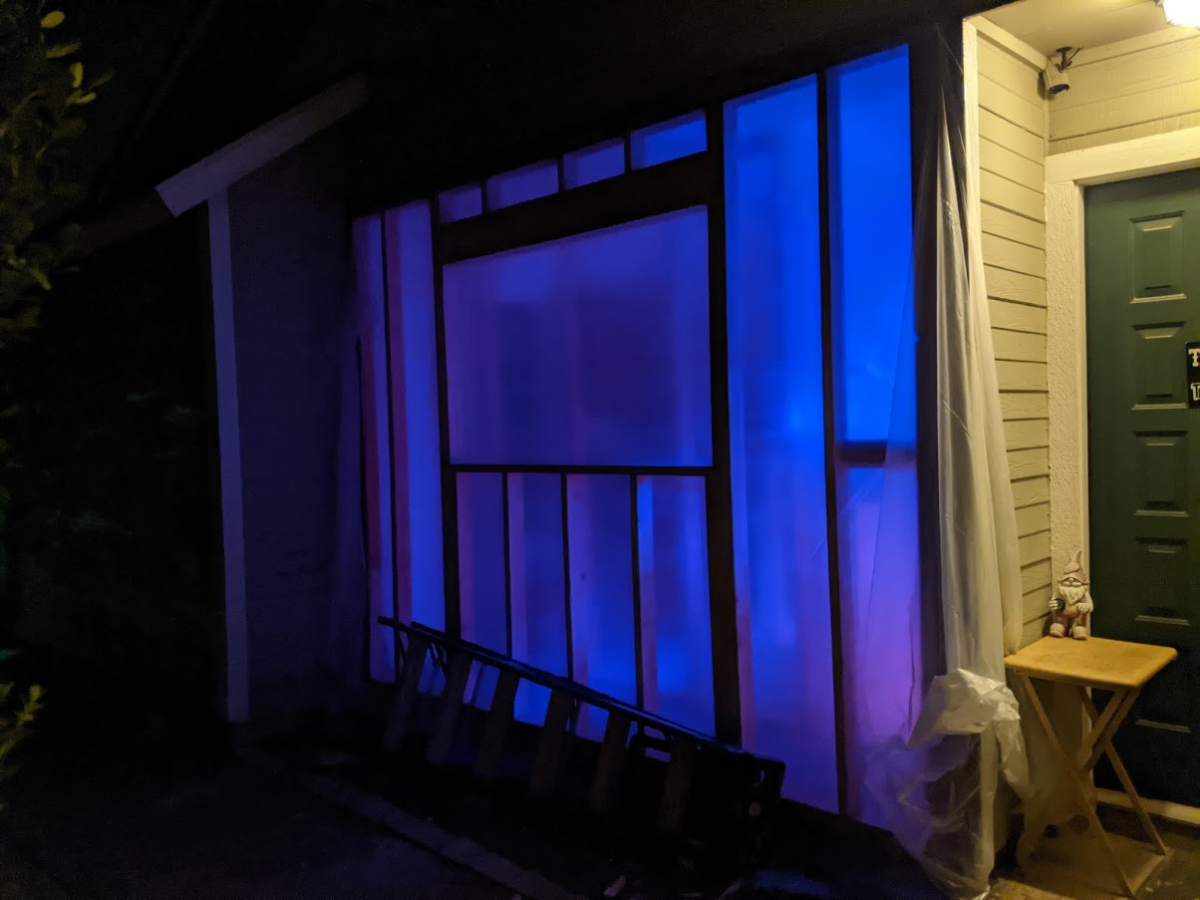 And then a day or two, or three later after sheathing, house wrap, a new window and of course the siding (hardie) 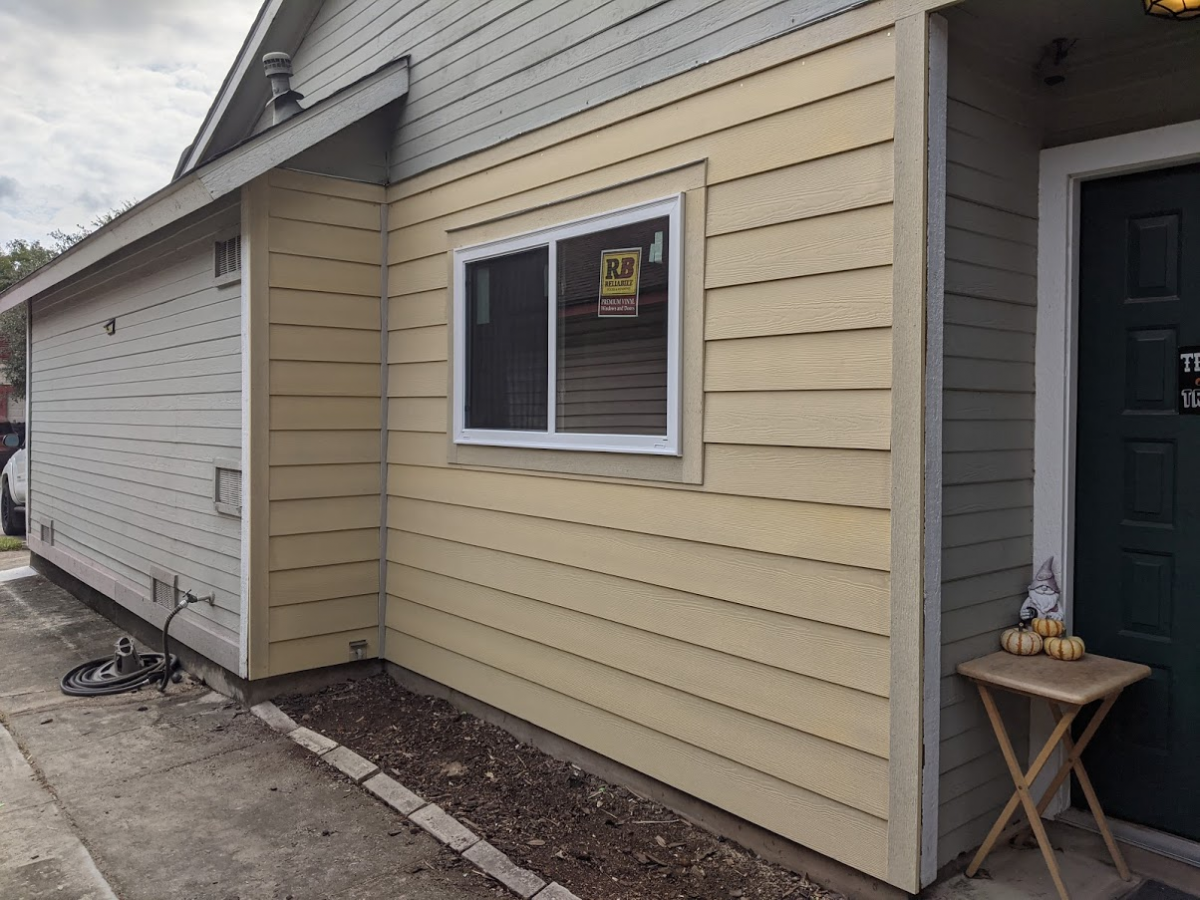 I'll spare you the progress pics on the internal build...but about a week later. Decided to paint it "ocean" colors. Went with 2 different tones, one for that deep water feel and one a little lighter 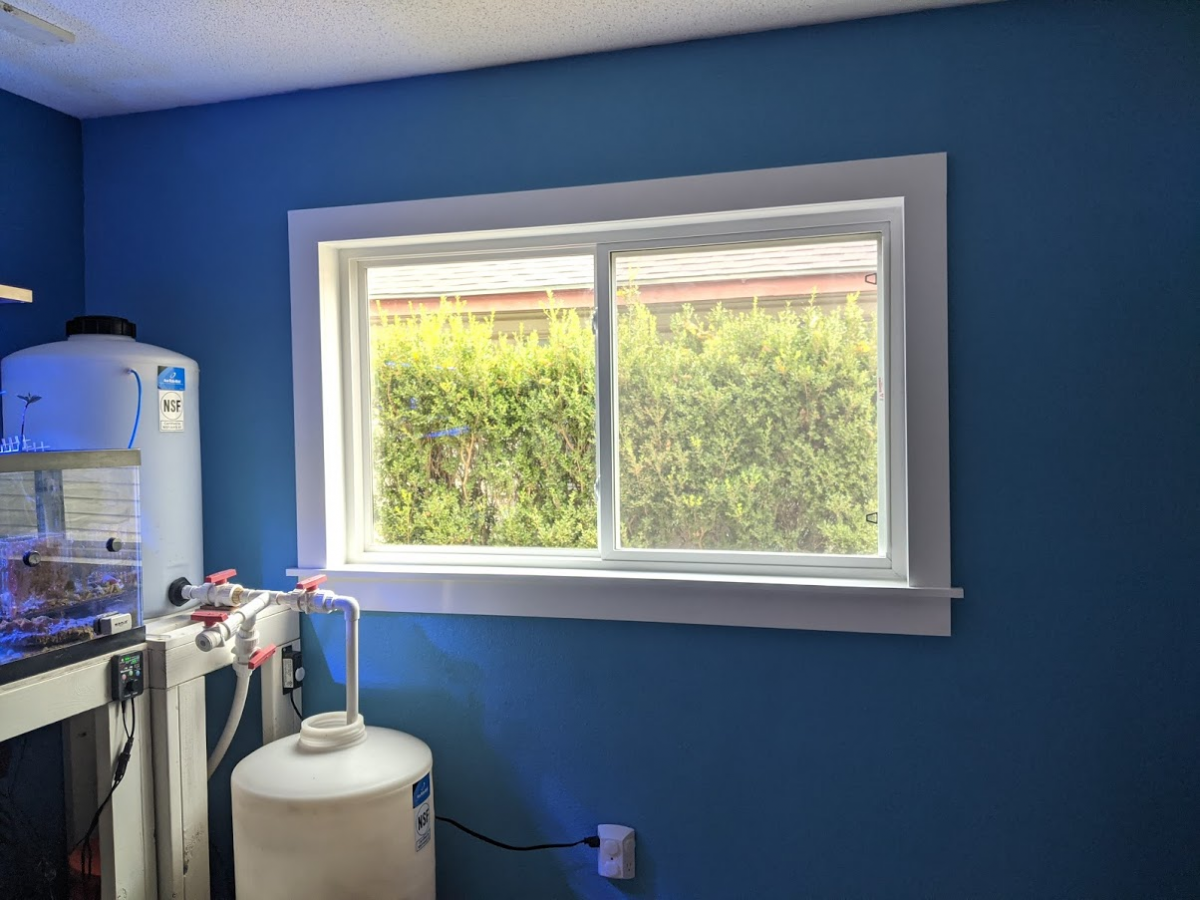 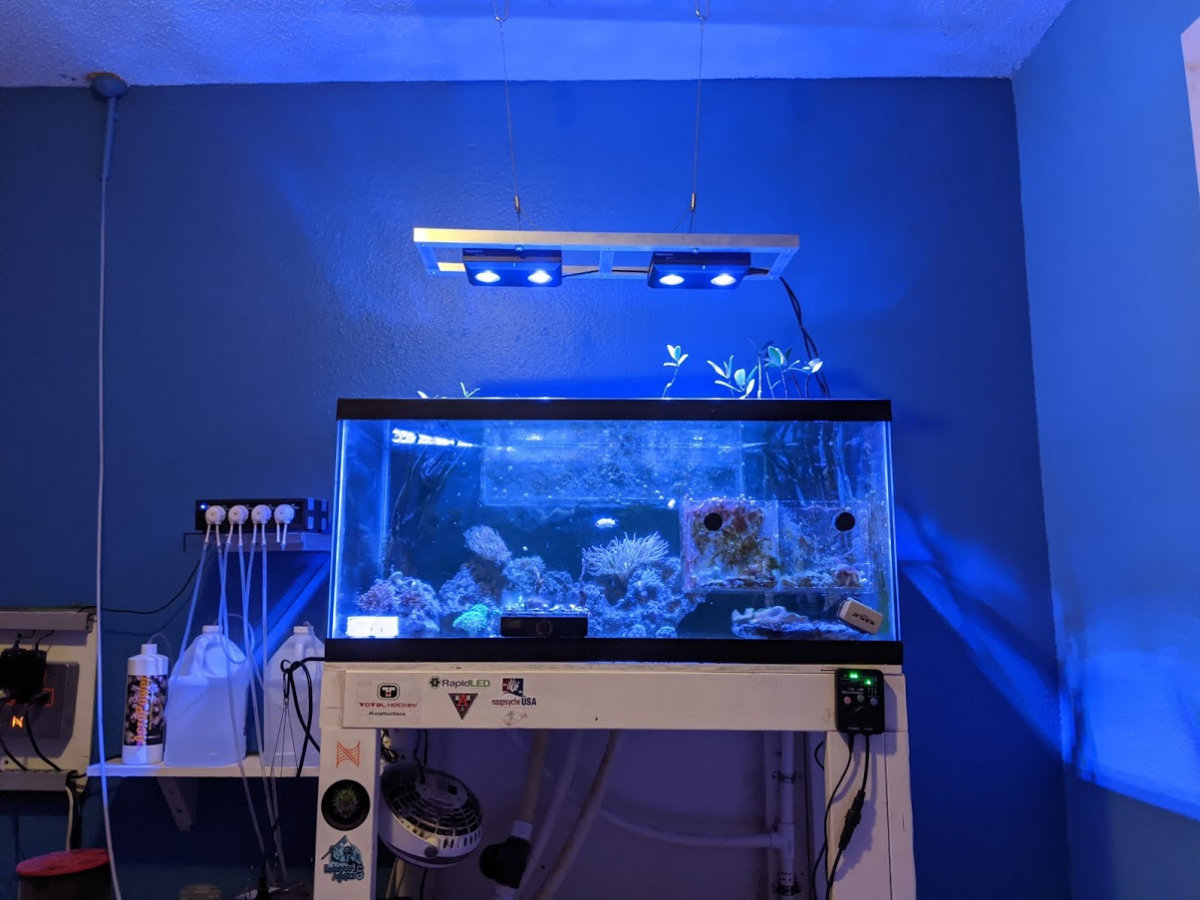 Since the reef room was back in operation I then did a large water change (75 gallons). I was wanting to do this anyways to "reset" the system. Things have been funky and throw in the construction dust, etc...thought it would be beneficial. 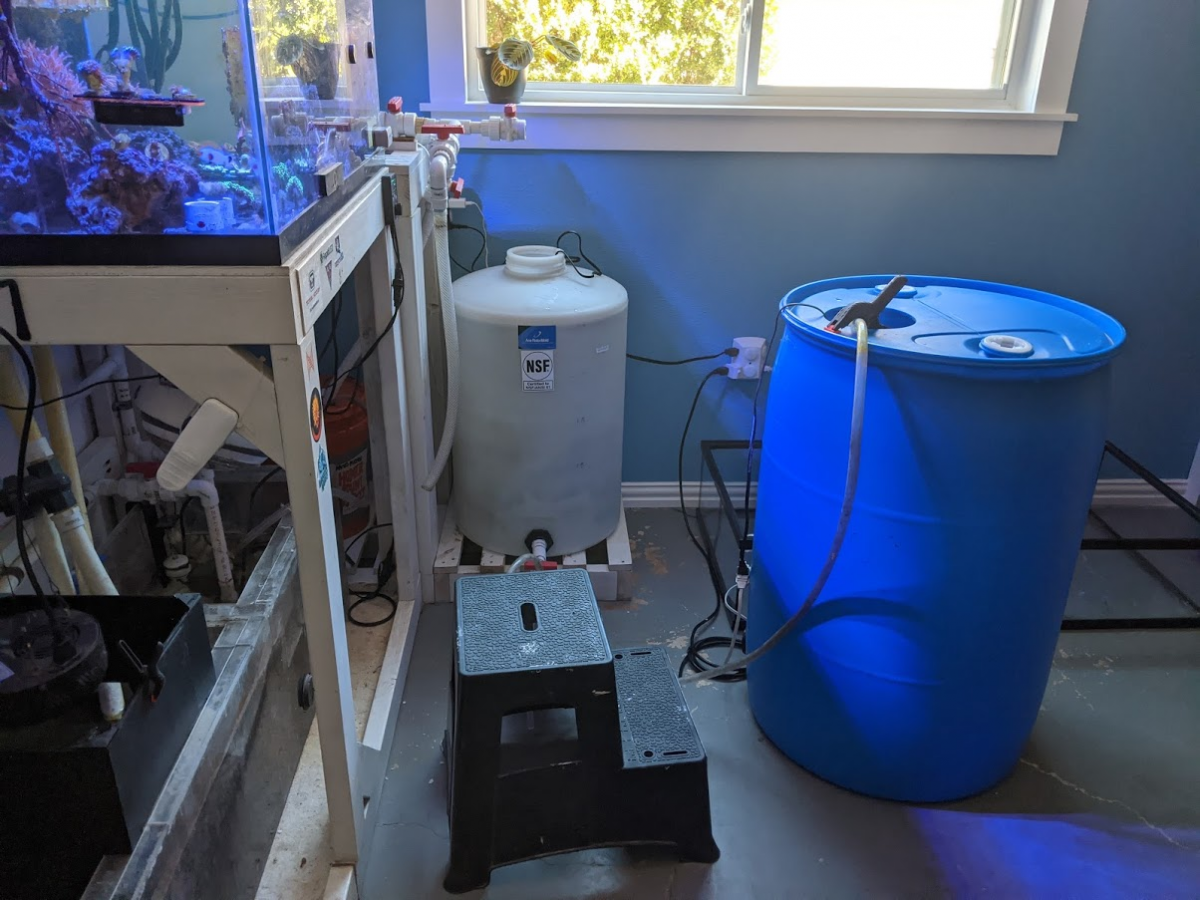 So at this point I started planning the lowboy addon. Basically planning to do something like this. The sump/fuge will be a 40g tub from tractor supply. Not a rubbermaid because the dimensions didn't work for me. Will be using uniseals instead of bulkheads on it.

Have most of the parts on order and really the only thing left to figure out will be the lights. So far I am really liking the noopsyches color and quality. I may be getting another pair for the lowboy.

That's a clean install. Looking forward to seeing 50g go up. Also, glad to hear the Noopsyches are holding up well. Based off the diagram, the 50 is going under the window with the sump/fuge?

spideybry said:
That's a clean install. Looking forward to seeing 50g go up. Also, glad to hear the Noopsyches are holding up well. Based off the diagram, the 50 is going under the window with the sump/fuge?
Click to expand...

Yes sir, that is the plan. Since I plan to move my mangroves into that tank they should benefit from the window light.
You must log in or register to reply here.