Hey everyone! This is going to be my very first build thread here, and probably my only for the next 4+ years as I will be in university and the dorms only allow pretty small tanks. Anyways, let me explain this build. I went with the Mini Complete Tank as I thought it was super cool for such a small tank. The total water volume is around 1 gallon, so that is what I will be basing most of my info off. The coolest part is it has a little sump that also works as the stand for the tank. The sump is super simple, white cotton filter, 2x black bio filter media, a heater and a return pump. I will attach a picture of the assembled sump.

Once I got this tank in, I assembled it as the product instructions described. The sump had a little warp when I first received it. After a bit of research, I found that the sump is made out of ABS, a common 3d printing material. I also found out this material is super simple to unwarp. I filled it with some boiling water and let it sit for awhile with the tank on top in order to 'lock' it into place. That worked somewhat, but not perfectly. However, the baffles that separate the different filter media ended up doing the trick to keep the sump in a perfectly stretched position. Now with a little bit of force, the display tank fits onto the sump perfectly.

One other issue I didn't see was that the stock heater was not even close to hot enough for my needs. I live in northern Ontario, and nights get pretty chilly here. After running the tank for a day or two, I realized that overnight the tank was dropping from 79 all the way down to 69. This would obviously be super unhealthy for any coral and will not cut it. So I ordered in the aqueon 5W flat beta heater. That should come in the next few days, so hoping that it heats up my tank a little more consistently.

Final big thing that I've done is begin my cycle. I stole some 3 month old sand from my girlfriend's 55 gallon tank, so that should help speed along the cycle. Additionally, I seeded my tank with dr Tim's One and Only. Hoping that dr Tim's along with the pre established sand will seed my rock and cycle the tank nicely.

In terms of plans, I know I am relatively restricted because of the size. Once I see some significant algae growth, I plan on reaching out to my LFS and seeing about some sort of a baby snail, maybe relocating to my girlfriend's 55g once it has grown a bit. Along with that, I'd like to run a few nice zoa's, maybe an acan or two, possibly a mushroom and something to fill in space later down the road like a pulsing xenia or green star polyp. These are just ideas though, and really stocking will be based on what's available and what is in the budget at the time.

The biggest challenge is going to be transporting the entire tank to university and home once or twice every year. I have some plans in mind, using a large bucket, fresh saltwater, and good insulation, I am hoping to make some sort of a 'temporary' tank for the 5-6 hour drive. We will have to see how that goes when the time comes, anyways. If anyone has any experience with a similar situation, let me know!

Finally, here are some pictures of the sump, tank, and the stock light (which is really bright, I'm super impressed) 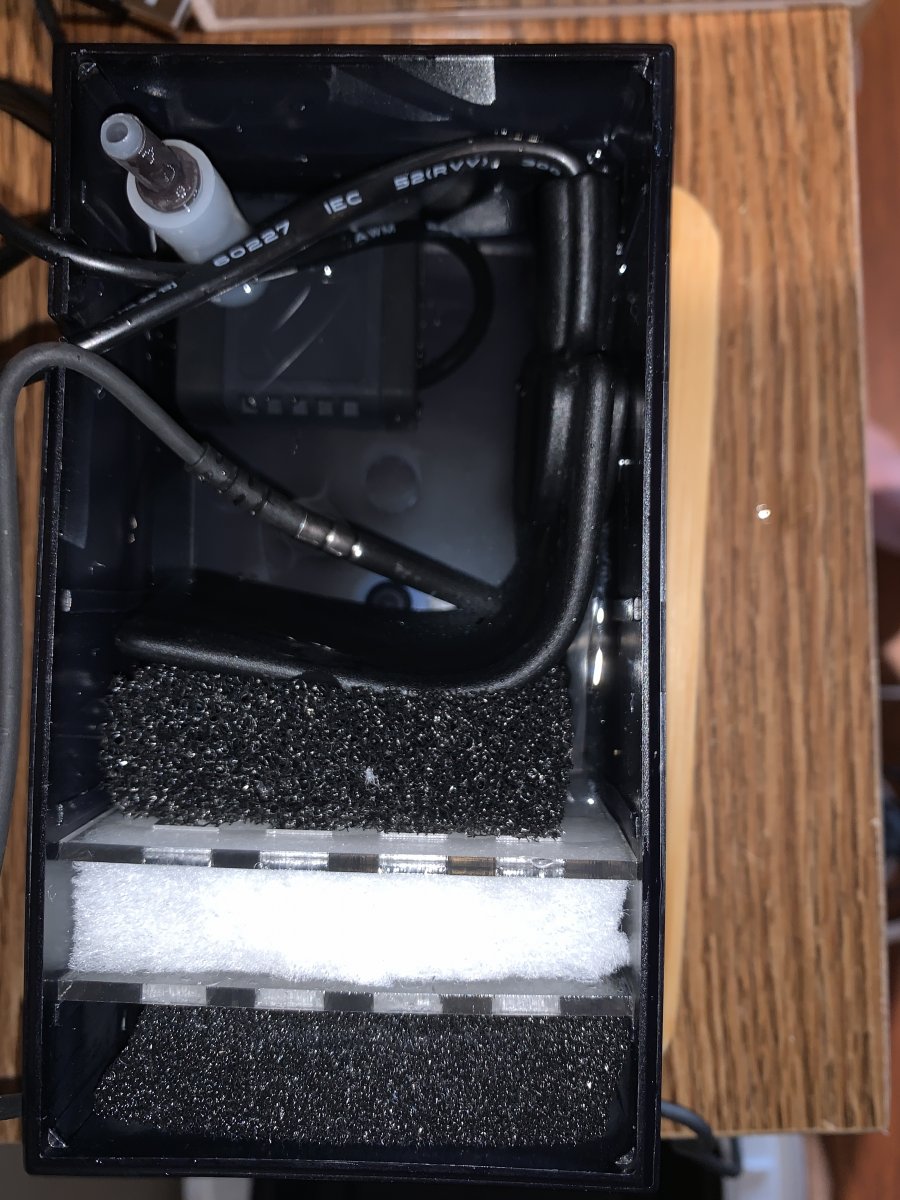 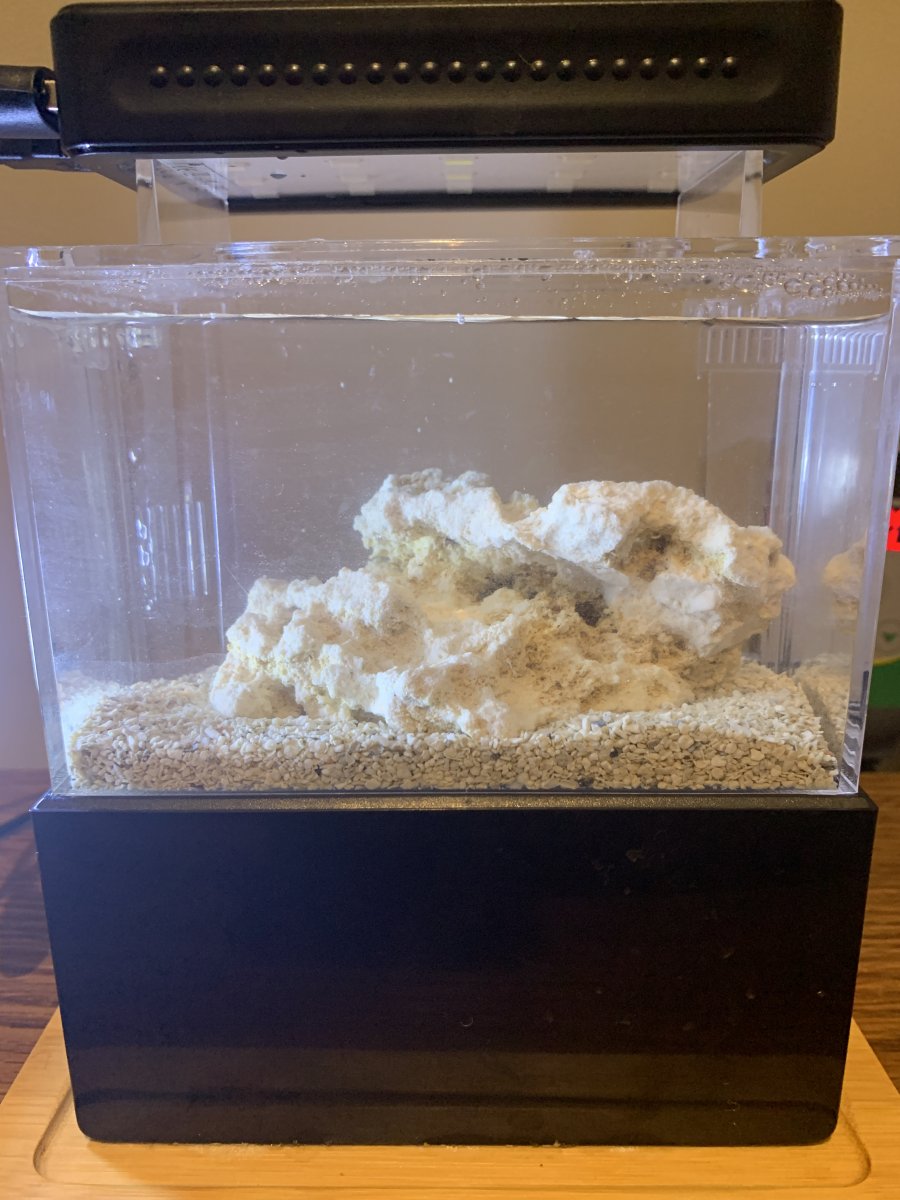 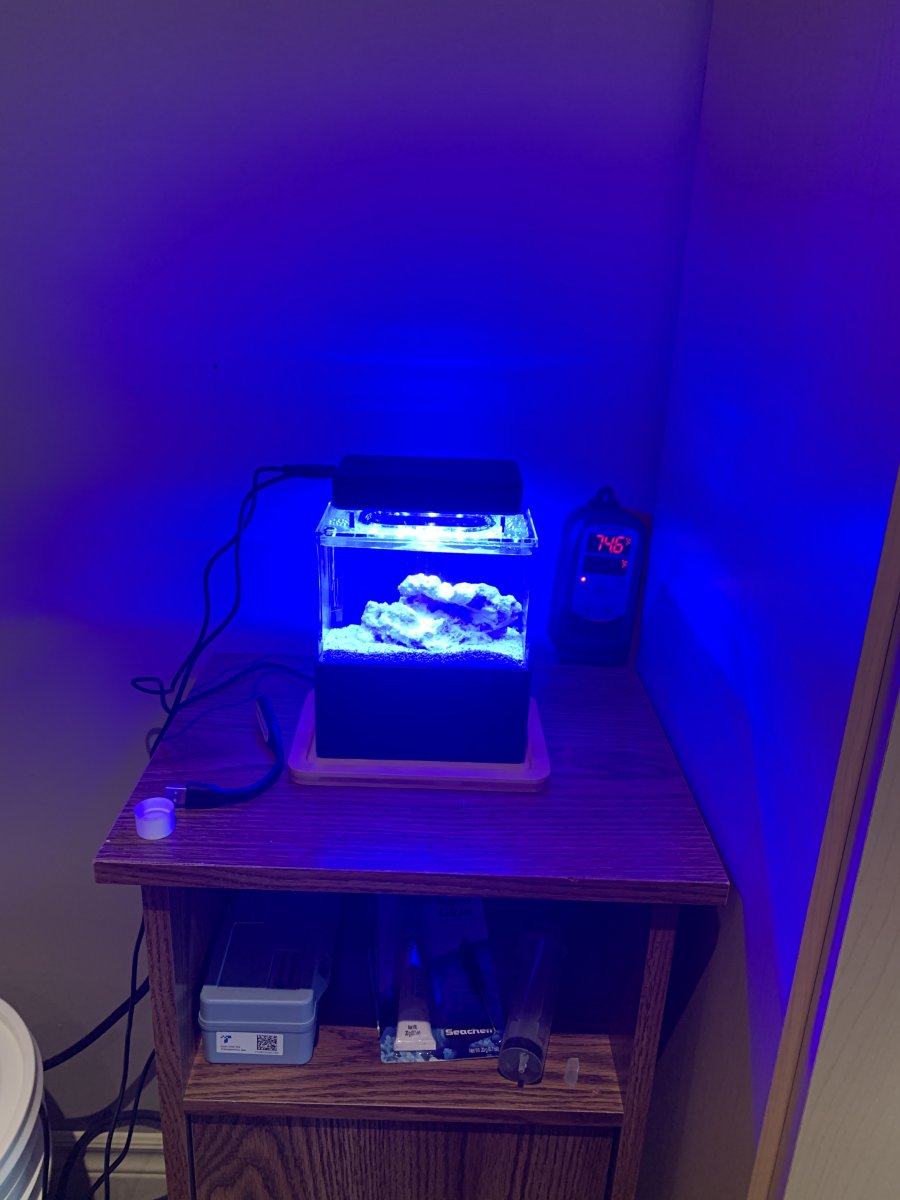 I will definitely keep this thread updated, hopefully for the next 4 years if all goes well! Can't wait to stock this up and hear from everyone. Let me know any stocking suggestions or tips with the whole transportation situation. Would appreciate any advice since I am only really 3 or 4 months into this awesome hobby.

I'm curious how you are heating something that small, if at all.
OP
L

I'm curious how you are heating something that small, if at all.
Click to expand...

Hey! Definitely heating it as nights and winters get super cold where I live. When I bought the tank, it came with a stock heater. It is the little bendy thing in the sump. Unfortunately, the heater was not even close to powerful enough. My tank drops down to below 70 overnight. So, I ordered this heater off amazon.


I reached out to some other people that own this type of tank and they say this heater works awesome. So I plan on laying it flat on the bottom of the sump, and hopefully that will heat this guy a little better. It should come in tomorrow, so looking forward to testing it out!

So cool! This system is on my buy list for sure

Small Update for anyone interested! I am about 10 days into my cycle. I have not been actively testing params, so not entirely sure how smoothly the cycle is coming along but will be doing some testing on monday to find out. Dr Tim's claims to be able to cycle in 14 days, so hoping that I can add some hardy pioneer coral to this tank in the coming days!

The reason I'm updating everyone is because of the heater situation! The stock heater that came with this tank was a complete flop, only got the tank up to 74 degrees on a hot afternoon, and dropped below 70 at night. These fluctuations were obviously not sustainable, so I had to replace the heater. I went with the topfin flat betta heater (5W) and this thing works like a charm. Fit perfectly into the sump thanks to the super small size, and gets my tank upto a constant 78 degrees easy. Will most likely try to run the tank around that temperature. I'll attach a quick picture of how the heater fits in the sump. Really does fit perfectly. 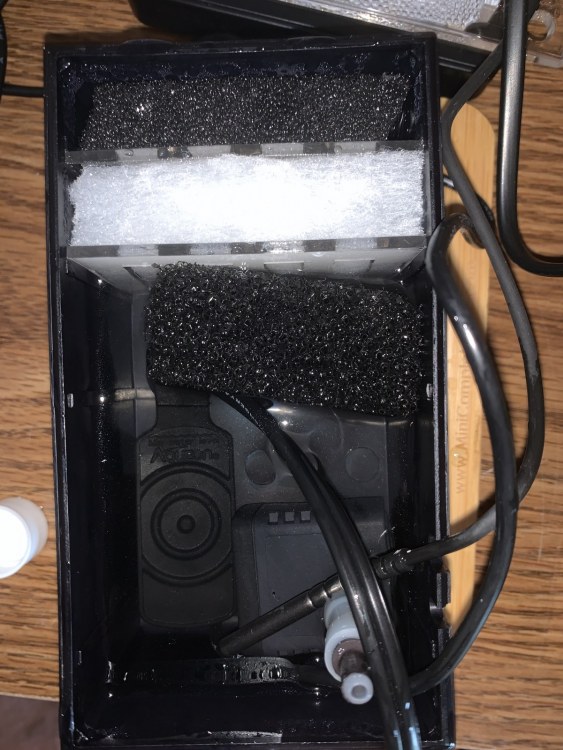 I am hopeful that the next time I update this thread it will include some coral in the display. In terms of stocking, based on what I've heard from others and what I have read, I believe I will either throw a zoa or a mushroom in there. This is because they are a bit hardier, cheaper (depending on the frag...) and will serve as a great guinea pig to make sure I am able to safely keep coral healthy and happy. I certainly don't wanna load this thing up and kill everything off. I really love euphyllia type coral, so if I am lucky enough to find a super small hammer frag or something similar, that may end up in here early on as well. I just love euphyllia lol. Let me know what you think, if you guys have any good coral ideas that I haven't found my hears are always open. Thanks!
OP
L

Alright, today was the big day! I got my hands on my first coral for this little reef tank! I am a big sucker for lps, specifically euphyllia. I called up my LFS and they were able to cut me off a head of a beautiful anchor hammer frag. I asked for one head, but it kind of looks like I may have gotten two, so I cannot complain! I'll attach a pic of the beauty as he was about half way extended while he got acclimated. This pic only shows the front head, but there is another behind the head shown. I am still getting used to photography with the LEDs, so definitely some room to improve in terms of photo quality. Hopefully that will improve with time lol. 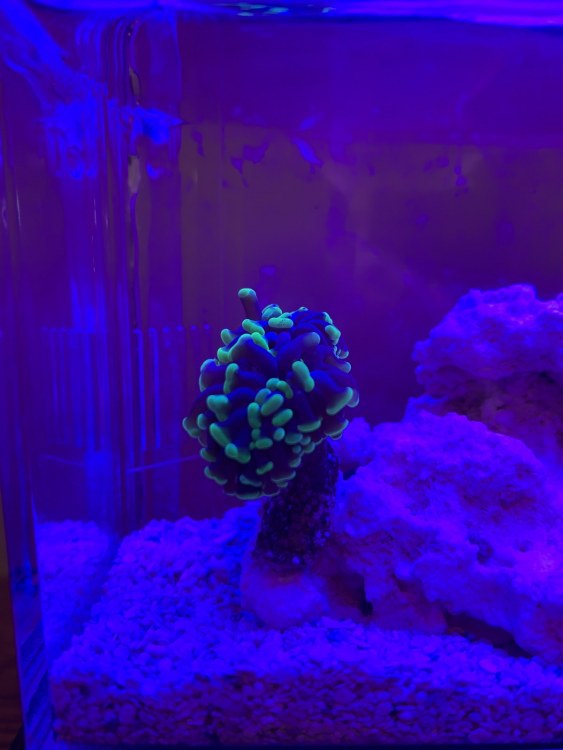 I am still relatively new to the scene with keeping coral, so I wanted to ask here about my lighting schedule. As of now, the stock light that came with this tank turns on at 10am and off at 8pm, giving it a 10 hour period. For anyone familiar with the mini complete, this is on the lowest light setting due to how the light turns on after being turned off. I was wondering if this will be enough light? I do not have a par meter unfortunately to get some numbers on this, which is why I wanted to ask around here. Thanks in advance!

This looks awesome, keep us updated! How are things going now?

Build Thread Figuring out a build