Introduction
Hey everyone! I thought I'd start a build thread to track my progress with my newest reef. I had about 7 active tanks running simultaneously when I was 13-15 years old, but then lost interest in the hobby and got rid of everything. I'm older now and haven't been working as much due to the state of the world (LOL) and have rekindled my interest in keeping aquariums. Things have changed a lot since I was last in the hobby. I started a little JBJ Nano RL-10 mid-2020. It's now kind of going to be my experiment/catch all "junk drawer" tank haha!

Anyways, on to this build! I slowly accumulated the equipment for this one over a period of months and finally set up the aquarium on 31 May 2021.

Equipment
- AI Prime 16HD light
- Sicce Syncra Silent 1.0 return pump
- Tunze DOC 9001 skimmer
- Finnex HMX Titanium 100W heater
- Hygger Mini Wave maker
- JBJ Nano ATO (which I have turned off because I can see the green light through the translucent back wall glass - so far the only thing I'm not digging about the Waterbox)

Aquascape
As far as aquascape goes, I went with CaribSea Life Rock and Special Grade Reef sand. I used epoxy and stuck a few Life Rock Nano Arches together, then secured those to a base rock. I then wedged a piece from another Life Rock underneath the back of the arches portion to give more support and kind of rotate the whole structure forward. I then threw another broken piece of rock in an empty spot near the back glass. The result is this hardscape: 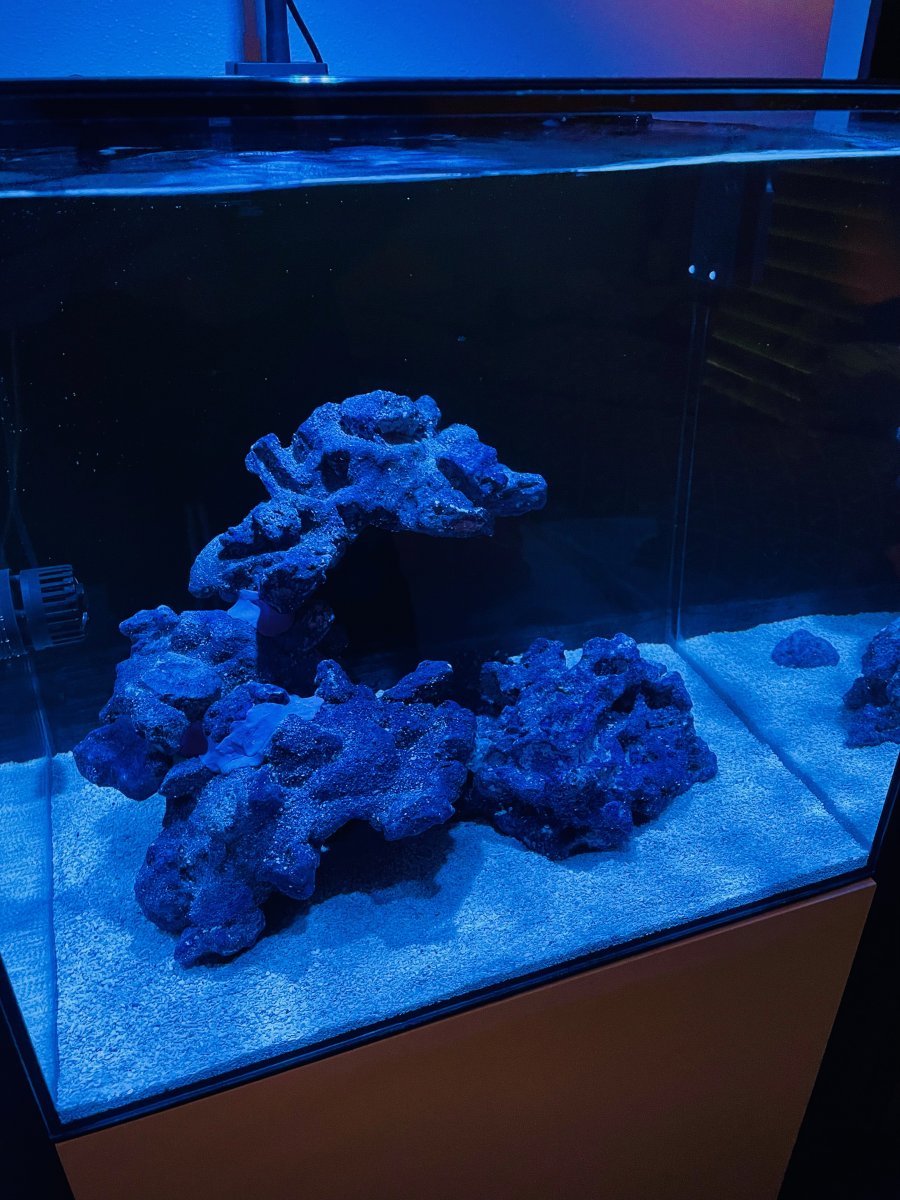 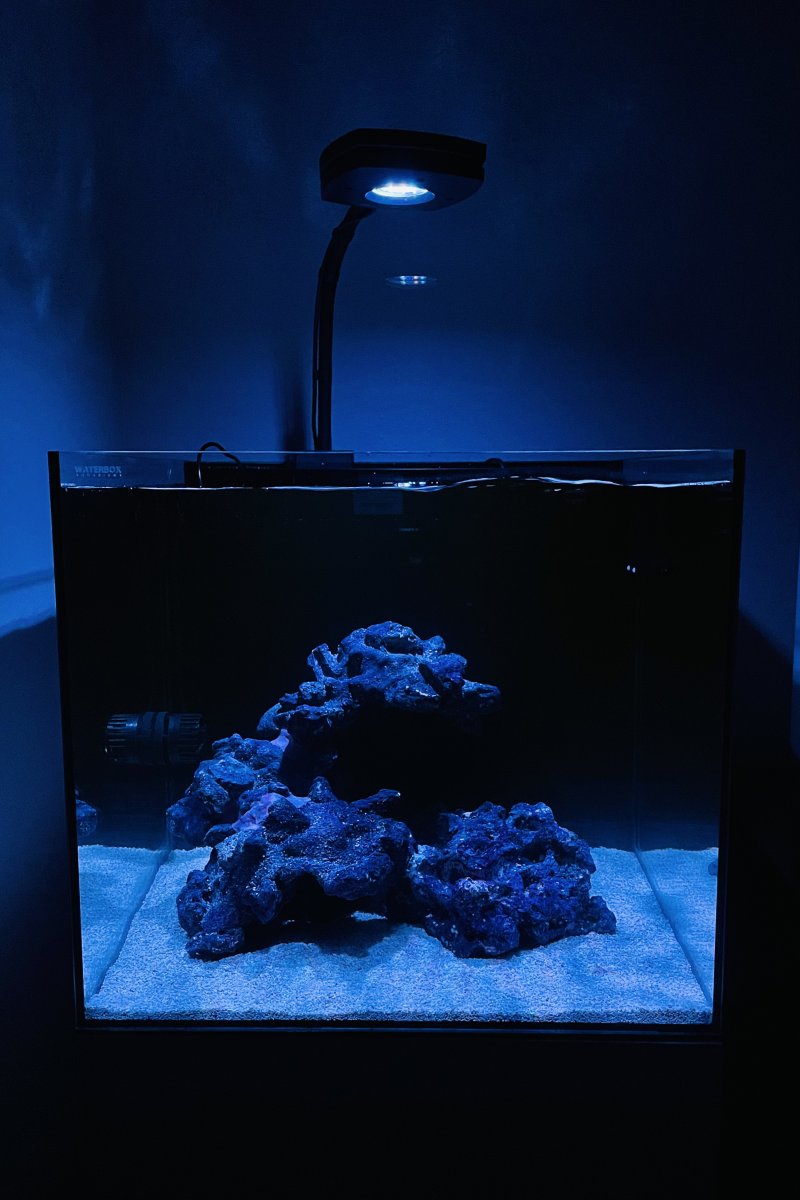 I really dig the disconnected arch ledge look and there's plenty of flat space for coral placement of varying heights throughout the tank. What do you think?

Flow
All the flow in the system is provided by the return pump and the Hygger Mini Wave Maker. I have the return nozzle pointed straight toward the front glass and slightly downward to avoid too many bubbles being created by the breaking of the surface, while maintaining plenty of surface agitation. I have the wave maker positioned in the bottom and rear halves of the aquarium, with flow going up and over, through and around the back of the rocks. Plenty of flow everywhere.

Filtration
Currently for filtration I'm utilizing the included filter sock and a handful of activated carbon in a mesh bag under the filter sock in the first chamber. I put the included bio-balls in the centre chamber but I'm not sure if I'll keep them. What are your opinions on bio-balls? I've never used them before. I'm concerned they may trap escaped debris? Maybe I'm paranoid haha! I also have the Tunze skimmer running in the second chamber but it's not doing much other than aerating the water since the system is so fresh.

Livestock
Before introducing any lifestock, I added a 1oz. bottle of Turbostart. I then introduced two Euphyllias from Seattle Corals. One being a blue and green branching frogspawn and the other being an orange hammer. Both BEAUTIFUL specimens, whose polyp extension just after shipping and dipping was impressive. 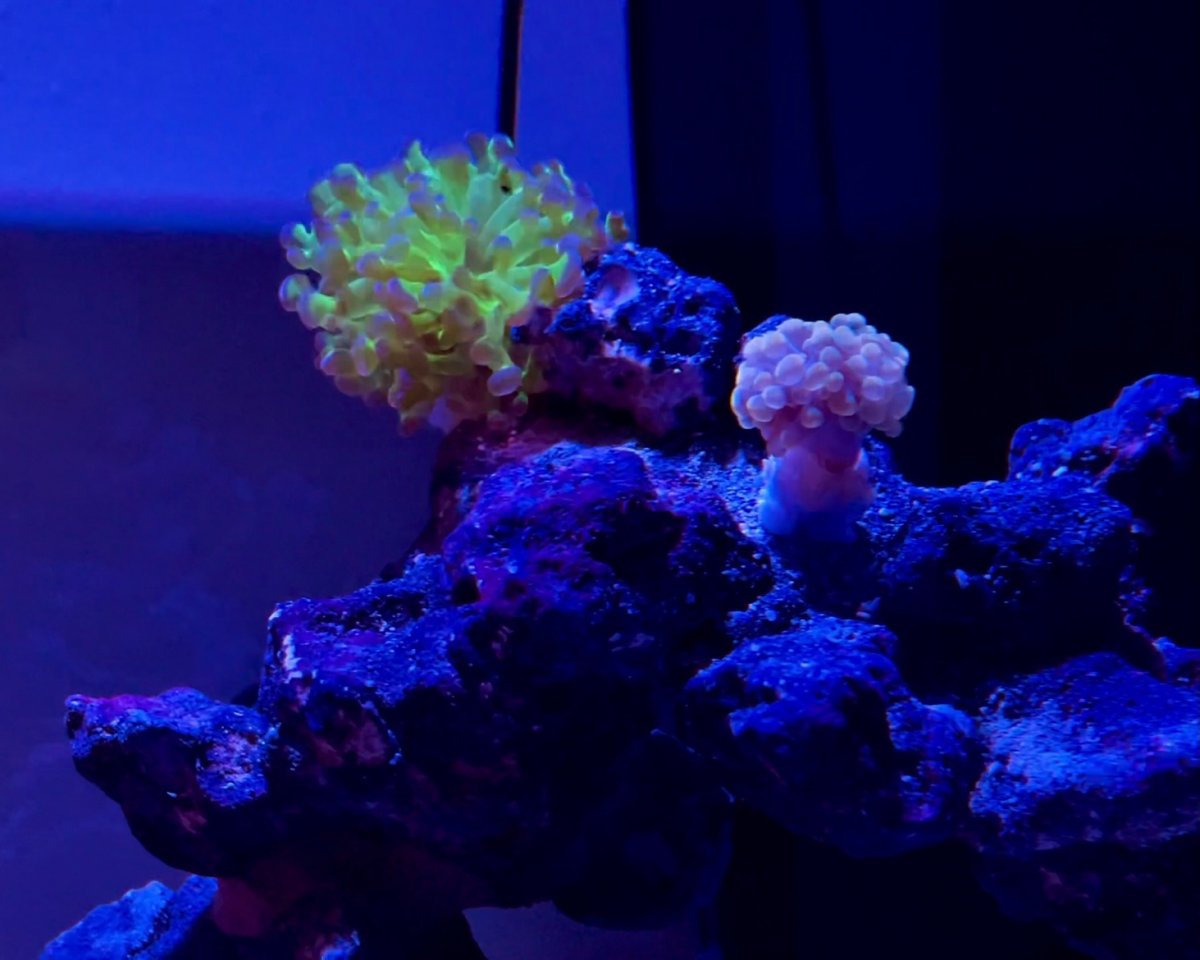 They've opened up even further since this photo was taken! They're little but gorgeous!

I also added some GSP but after getting it home from the LFS, it appears to be a branching variety of GSP. Do you know if I'll get the back wall coverage I'm desiring with the branching kind? Or do I need to get the standard GSP? 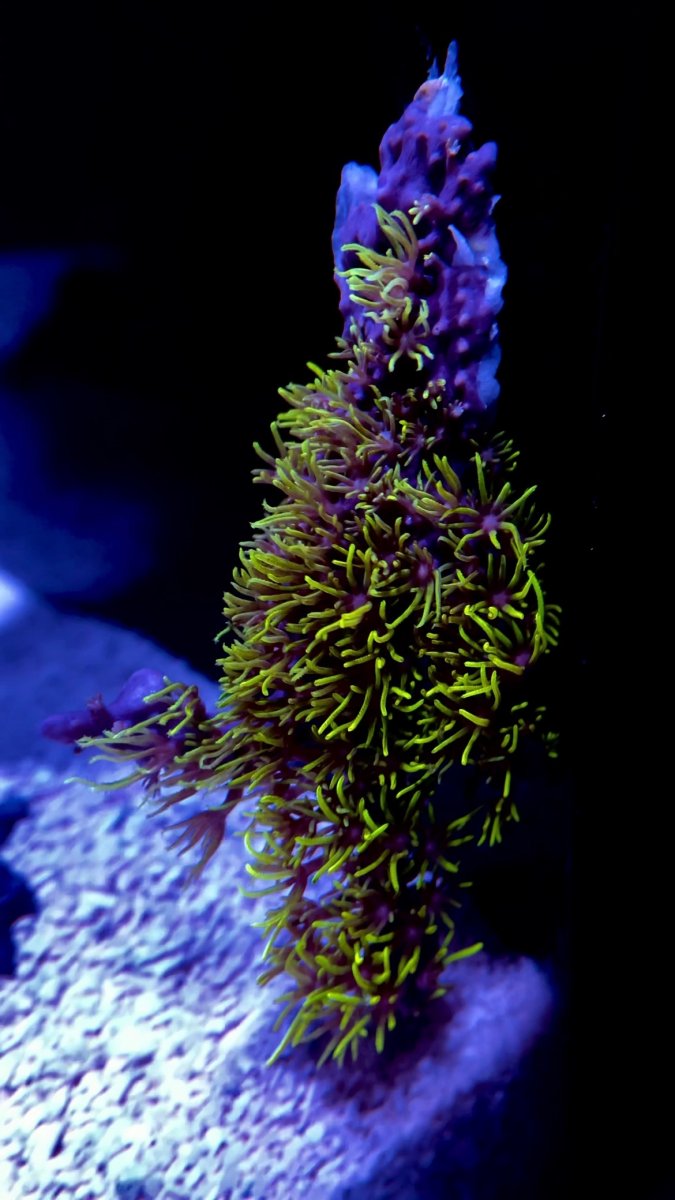 Nonetheless, I love the look of any GSP! I just want the whole back wall covered.

A few days after adding these corals, I received two Indo Pink Skunk clowns and a cleaner shrimp from Sustainable Aquatics / Coral Reef TN. I added another half ounce of Turbostart with the fish and the shrimp just because it made me feel better LOL. 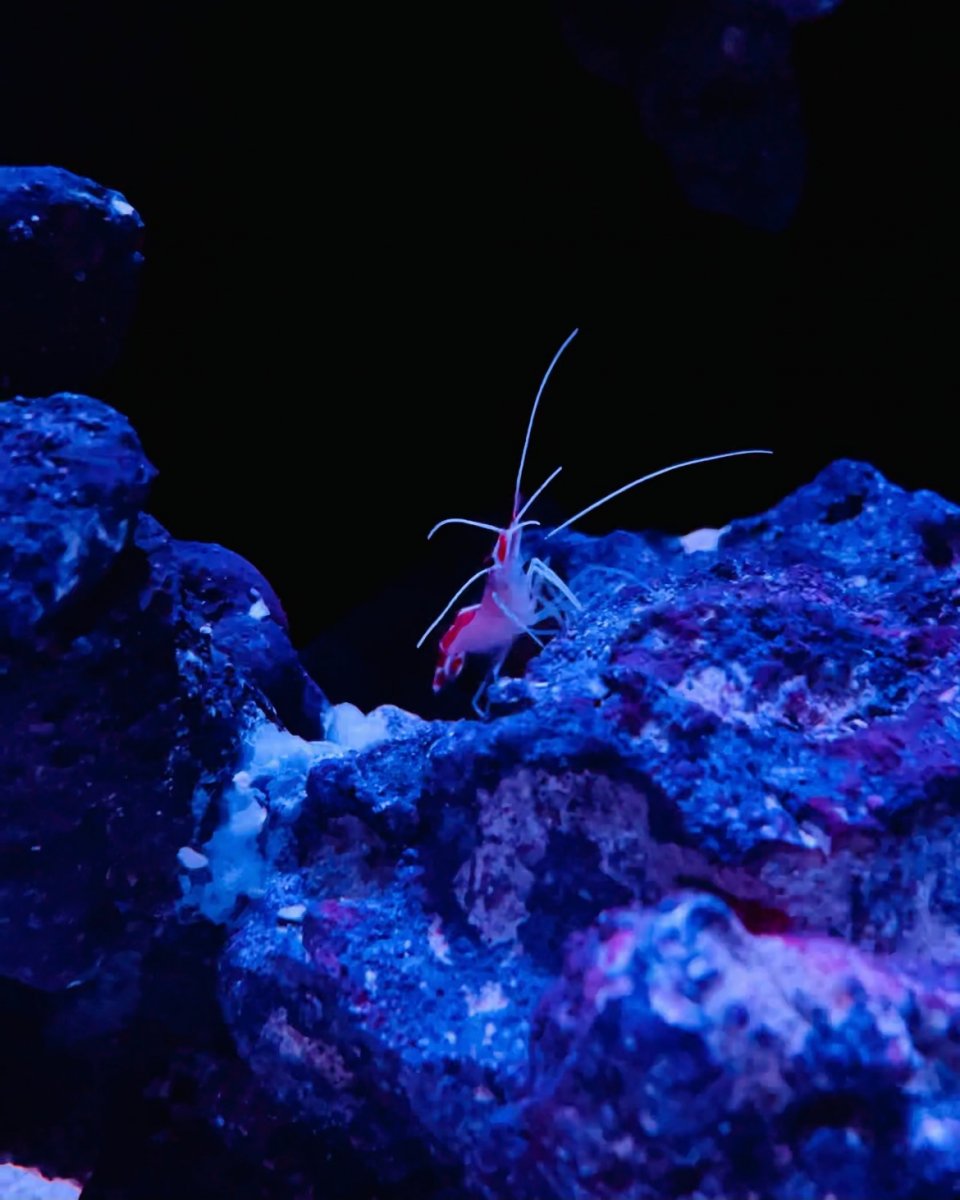 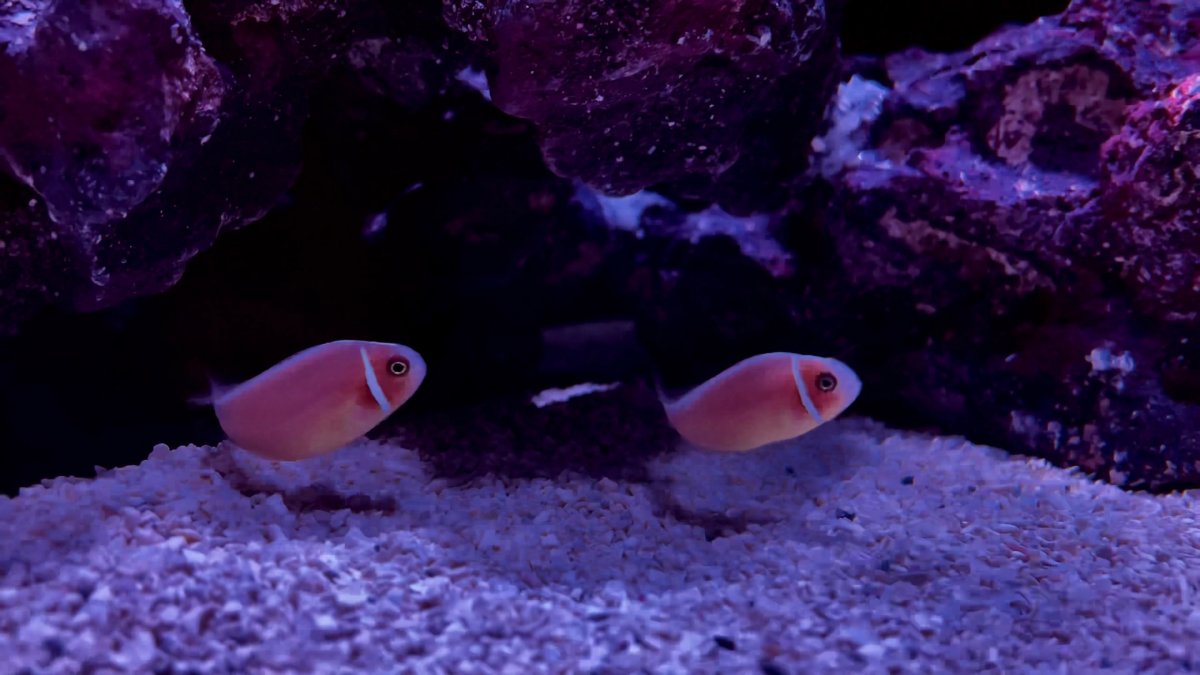 The skunk clowns are so different from the Ocellaris I've kept. They're very shy and seem very gentle with each other. It took them a few days to come out of their little cave home they've made for themselves. They're very interesting to watch as their behaviour does seem vastly different from my other clowns. Beautiful colouration too! Drop those naming suggestions!

Plans
Plans for the future of this tank are honestly fill it with the "plague" type corals. Kenya Tree, Xenia and shrooms and let things run wild. Perhaps zoanthids or palys in the future when things are established as well. I'll be getting an order of shrooms next week. Hopefully they look as good in person as they did in the photos haha!

Any ideas for future stocking? Other comments? Let's hear it! 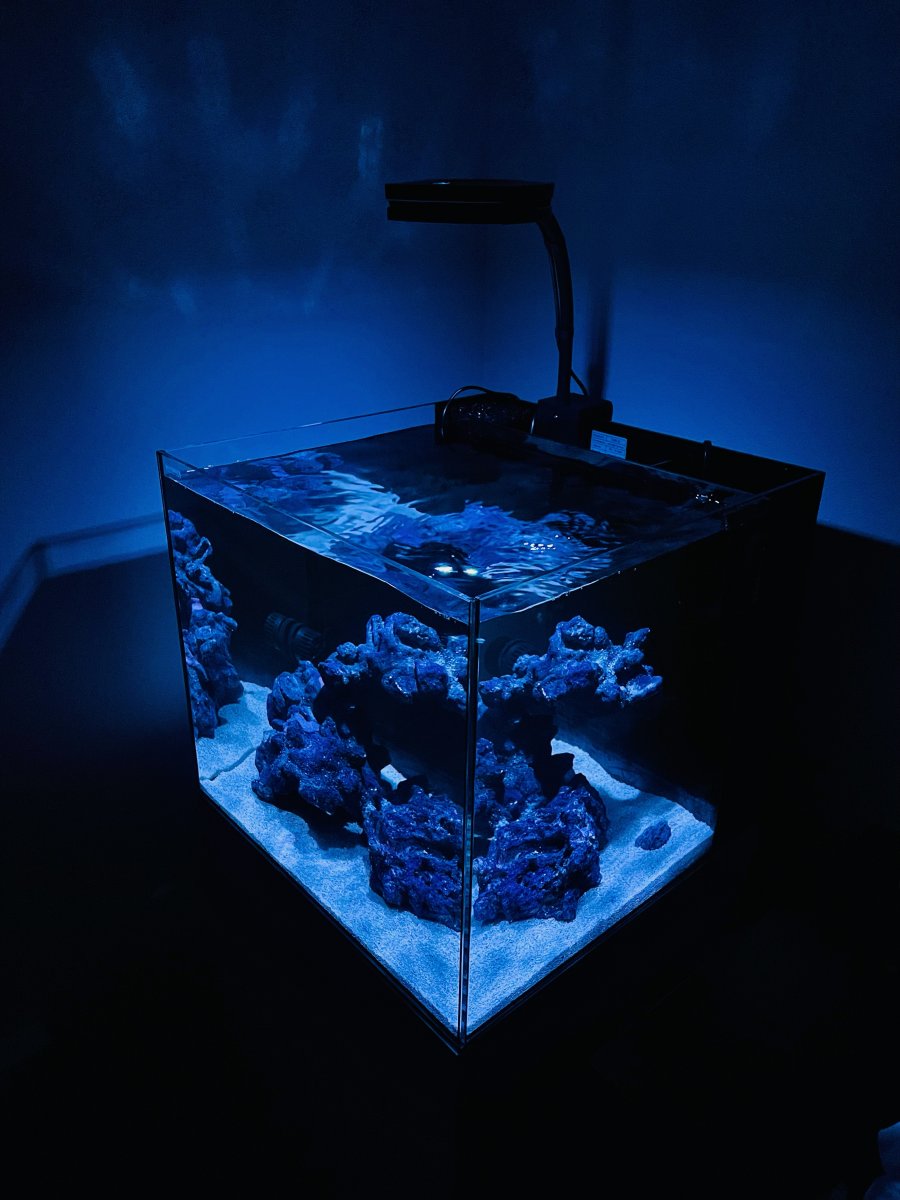 Wow. You added corals after 2 weeks? Did you use sand or live rock from your other aquarium?
OP

mudjawd said:
Wow. You added corals after 2 weeks? Did you use sand or live rock from your other aquarium?
Click to expand...

The frogspawn and the hammer were introduced on day 4 of the aquarium's existence. The clowns were added on day 5. I didn't use any cycled media, sand or rock. However, I did use about twice the recommended dosage of Turbostart (one portion when the euphyllias were added and the second portion with the clowns).

Looks good! Those clowns are adorable.

Thank you! I love the clowns. I wanted something a little different since it seems everyone has the designer clowns now. They're very sweet fish.
OP

Well, this tank has been set up for just over a month and things are going well so far - even with my somewhat rushed style for this build! I've added many more corals and aside from switching out filter socks every week or so, filling up the ATO reservoir and cleaning the glass every few days, I've done zero maintenance. No water changes, no dosing and no testing. All the livestock is doing well and I'm seeing good polyp extension and growth from the corals. The toadstool seems a little unhappy, perhaps getting too much light on the top of the rock. The GSP is, unsurprisingly, doing very well and is rapidly spreading up the back glass. I'm making it a point to keep my hands out of the tank as much as possible, only having messed around with things one time to make room for the number of frags I received. Otherwise, it's hands out and hands off!

Plans
As far as corals and inverts - I'm definitely fully stocked in this regard. I would like to add perhaps two more small fish but I'm going to let things go for a bit longer with just the current residents. 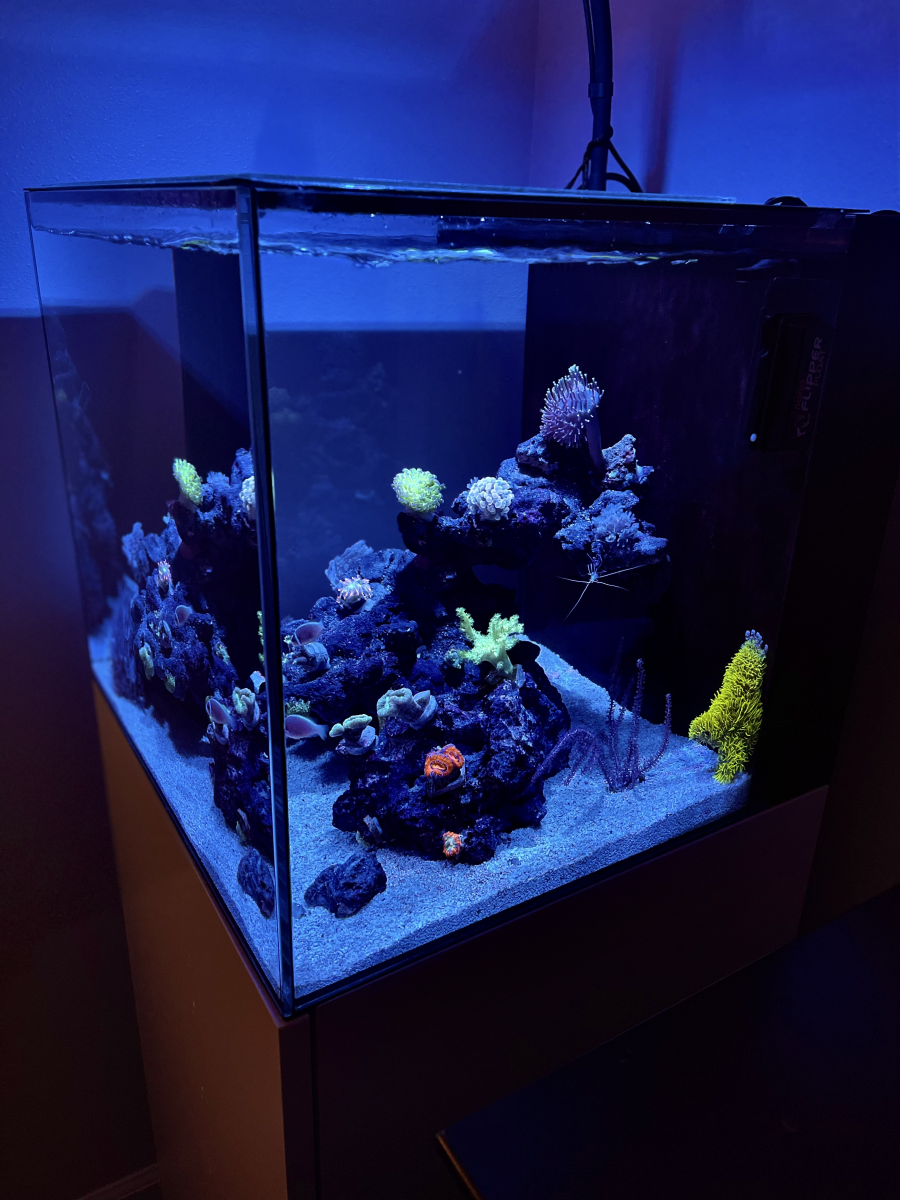 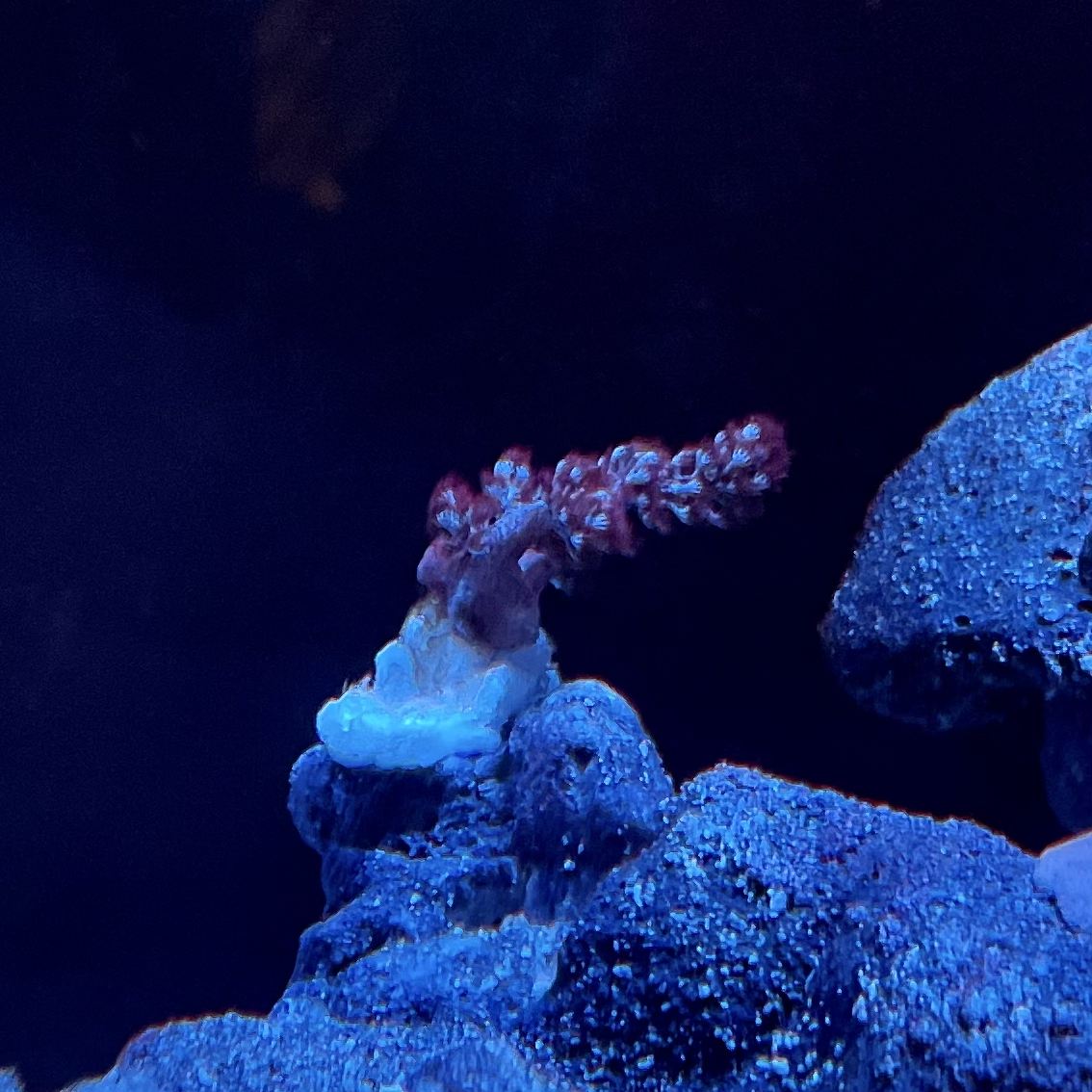 The Kenya Tree is rather ...flaccid... because it fell off the rock and just swirled around the tank for like a week haha 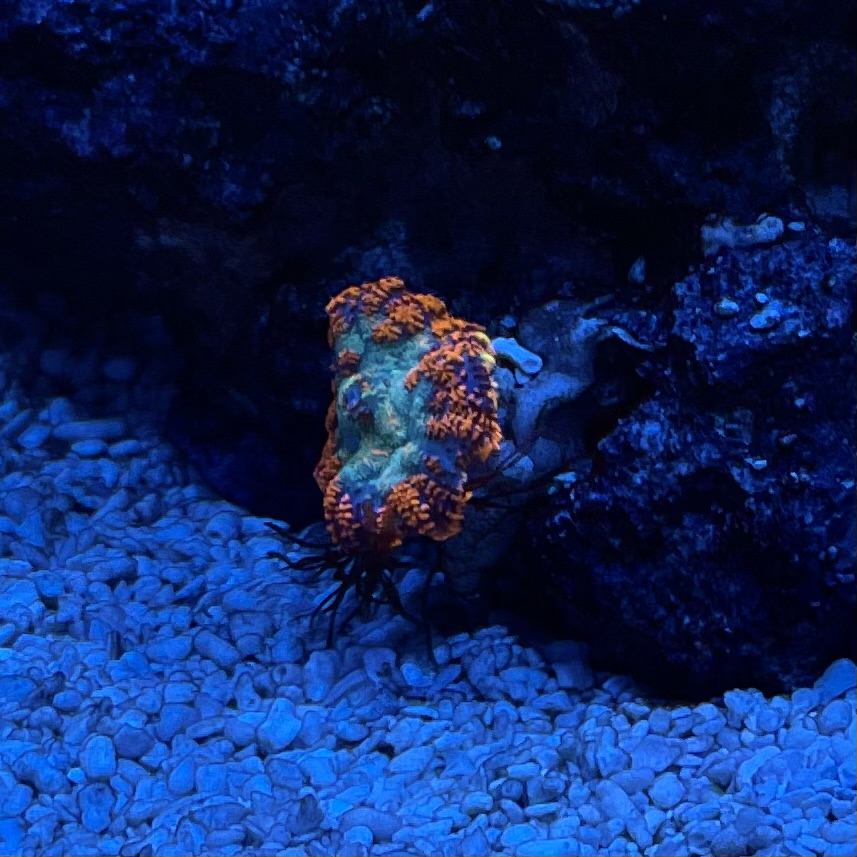 This shroom has some sort of algae growing out from under it. It doesn't seem to be upsetting it too bad, so I'm just kind of rolling with it. 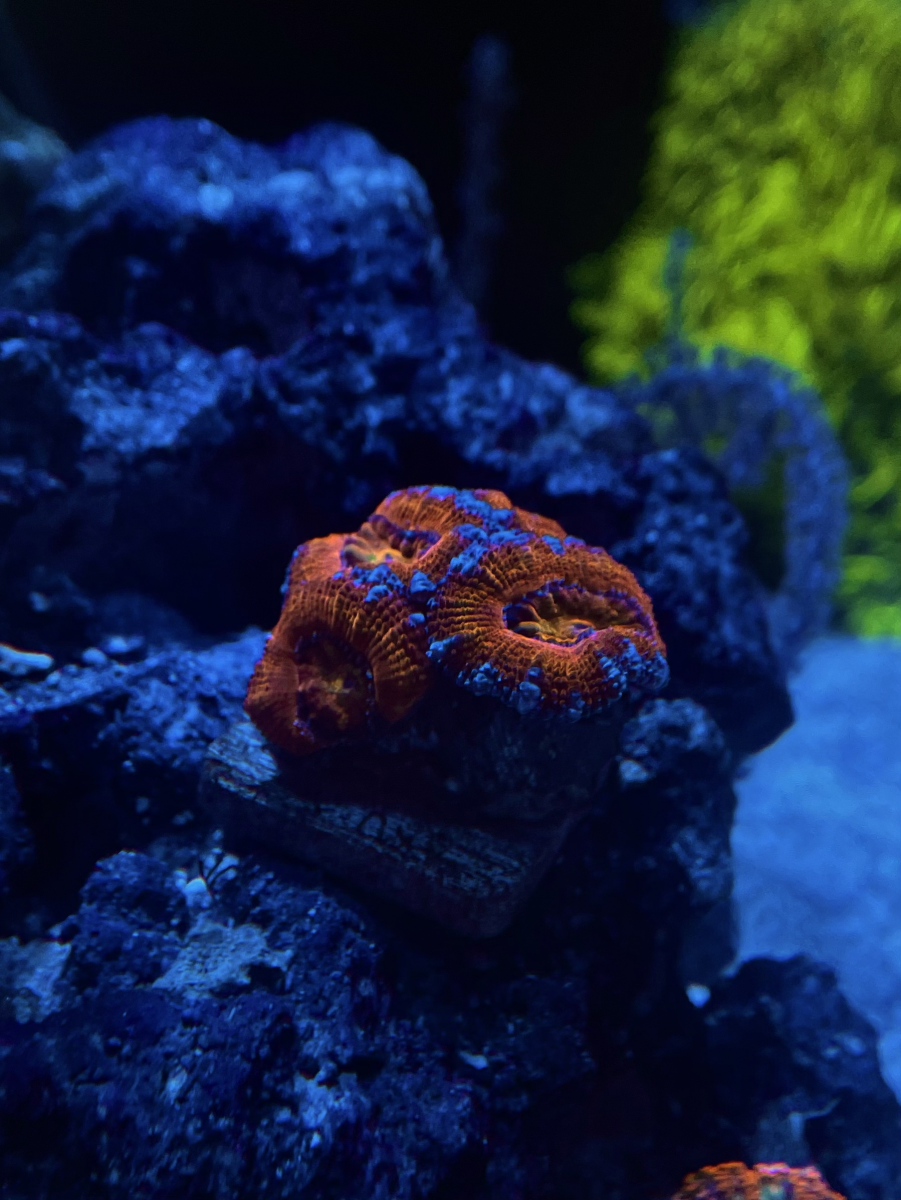 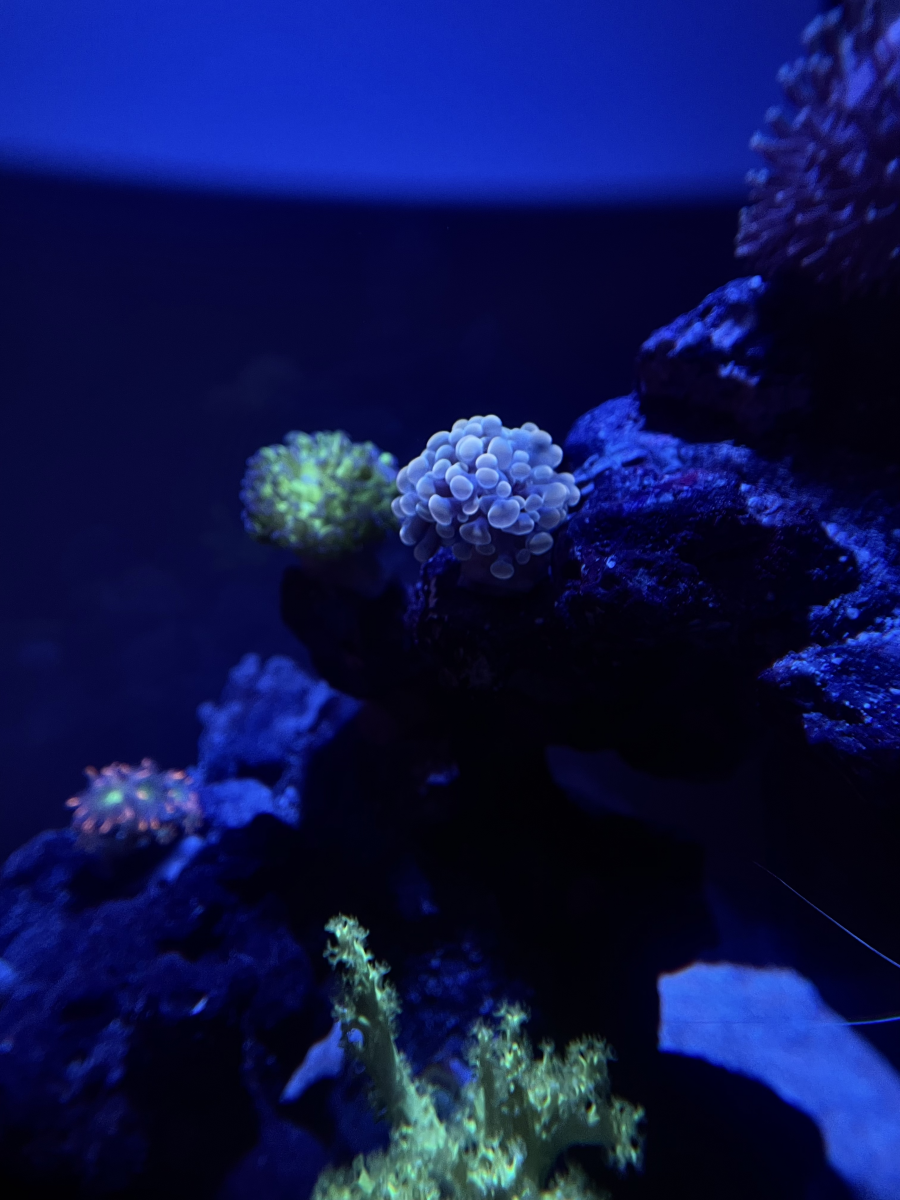 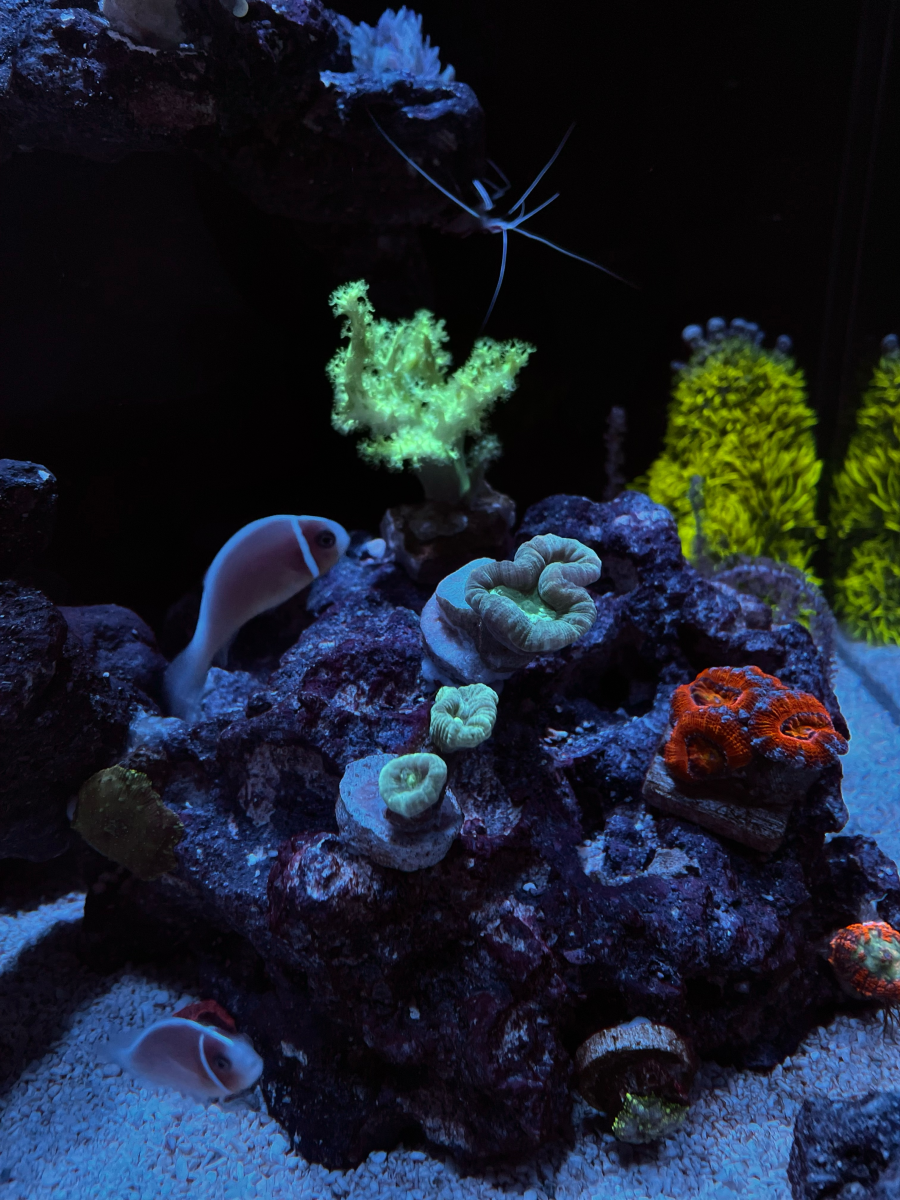 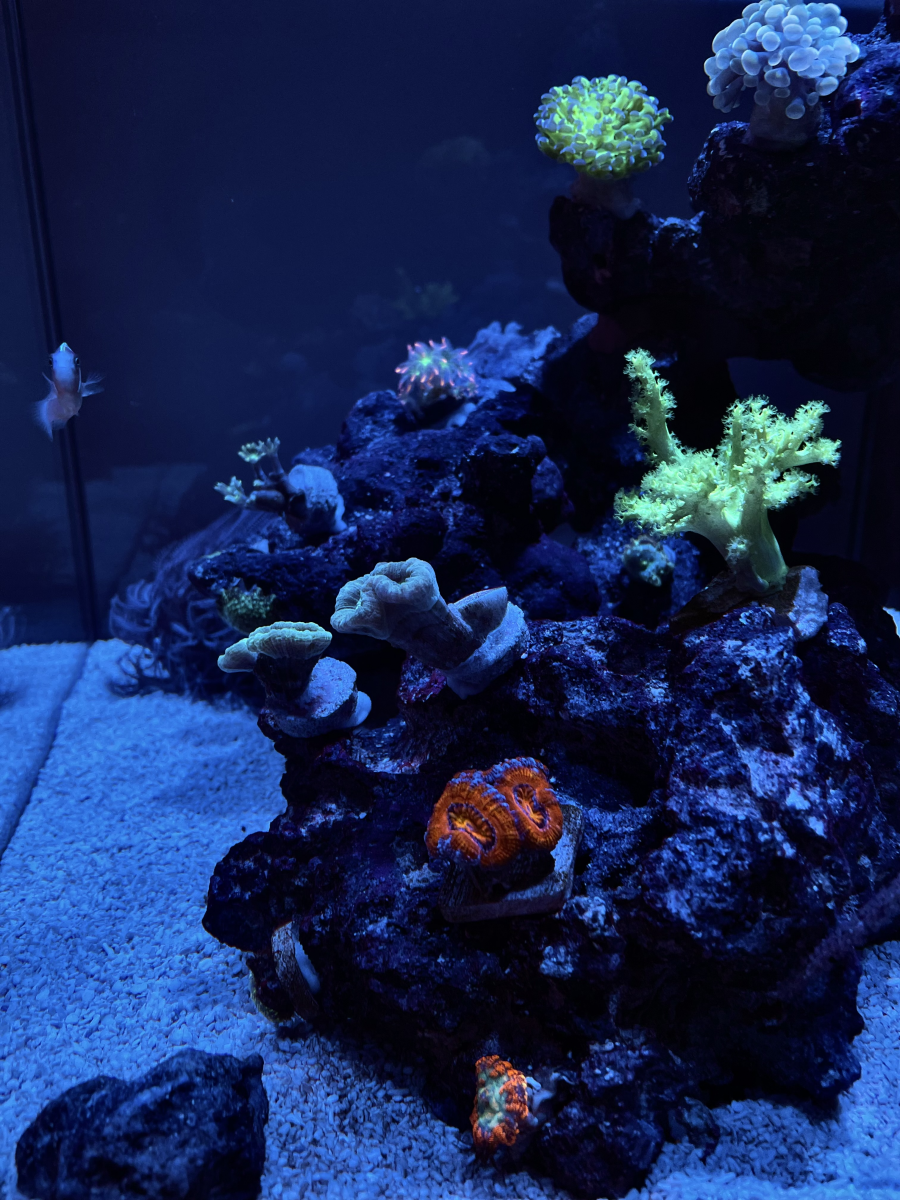 I forgot to add, I removed the wavemaker! So all flow in the tank is provided solely by the return pump. Simplicity is the name of the game in this build!

Awesome tank for it being so young (gives me hope for mine!) What's your feeding schedule like? Are you broadcast feeding your corals or spot feeding?
OP

Gedxin said:
Awesome tank for it being so young (gives me hope for mine!) What's your feeding schedule like? Are you broadcast feeding your corals or spot feeding?
Click to expand...

I feed pellets to the fish almost daily and some days I throw flakes in. Once in a while they get frozen mysis as well. I have not fed the corals at all in this tank so far. 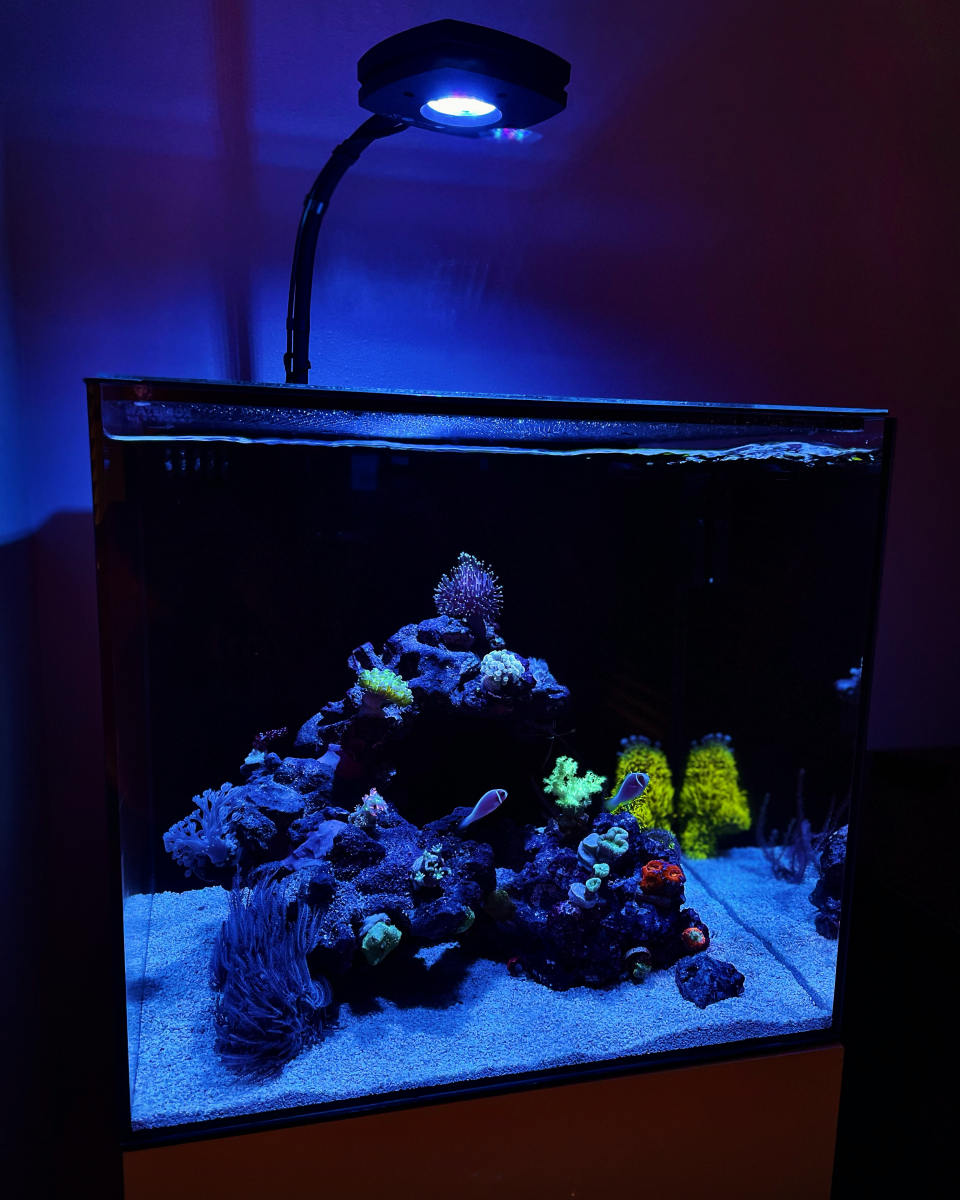 Just a quick update shortly before the two month mark! The tank is doing very well in my humble opinion. I appear to be in the beginning stages of some sort of an algae bloom (maybe even dinos?) but there's not even enough to get photos for identification. Whatever it is seems to mostly be on frag plugs that all originated with one specific online retailer, so take that as you may. About a week ago I did a 2 gallon water change because my GSP, toadstool and Kenya tree were looking a little upset, so I thought why not, considering the tank had coasted for about 1.5 months without a water change. The GSP is starting to open back up again but the toadstool is being temperamental as is the Kenya. Everything else seems very happy!

I did not do any testing before the water change which I regret as it would have been interesting to see where things stood after that amount of time without intervention. But today I tested so this can be the new benchmark. Parameters are as follows:

I have done no dosing of any sort and have only done 2 gallons worth of water change for the nearly 2 month lifespan of the aquarium.

Thanks for following along!

Such a great looking tank! I'm two weeks post cycle and just saw the first indications of algae on my sand (where light is the brightest.) Already done 2 water changes as well. You've got a golden egg there!
OP

Gedxin said:
Such a great looking tank! I'm two weeks post cycle and just saw the first indications of algae on my sand (where light is the brightest.) Already done 2 water changes as well. You've got a golden egg there!
Click to expand...

Thank you! Your tank is pretty sweet too!

Thank you! What coral are you liking the most? I'm debating on picking up something during WWC's sale this weekend and am paralyzed by the plethora of choices.
OP

Gedxin said:
Thank you! What coral are you liking the most? I'm debating on picking up something during WWC's sale this weekend and am paralyzed by the plethora of choices.
Click to expand...

I genuinely can't answer that question because they're all my faves in one way or another. I'm super easy to please though and my all time faves are Xenia and GSP. Much to everyone else's dismay I'm sure haha! I've been really impressed with the amount of growth I've seen from the Cespitularia though.

Very, very nice. If you can get a full GSP back wall that would be awesome. I know you are going with the return pumps only for flow, but maybe just one tiny wave maker that is hooked up to an Icecap battery backup, just to break the water’s surface if the power goes out when you are away? (Possibly not a concern where you live.)

JumboShrimp said:
Very, very nice. If you can get a full GSP back wall that would be awesome. I know you are going with the return pumps only for flow, but maybe just one tiny wave maker that is hooked up to an Icecap battery backup, just to break the water’s surface if the power goes out when you are away? (Possibly not a concern where you live.)
Click to expand...

That's what I'm hoping for with the GSP! And yeah I definitely need to come up with a backup plan of some sort for flow and heat, especially before winter gets here.
OP

The good, bad and ugly! As mentioned in a previous update there was some sort of funk growing on some frag plugs. Any thoughts on ID? I took each frag with whatever it is and dipped in H2O2 to get rid of it. Very strange stuff, some of it is soft and hair-like as you'd expect algae to be and some is stiff and feels basically like fish bones (if you've ever eaten salmon, the small bones). That's the best way I can describe it. 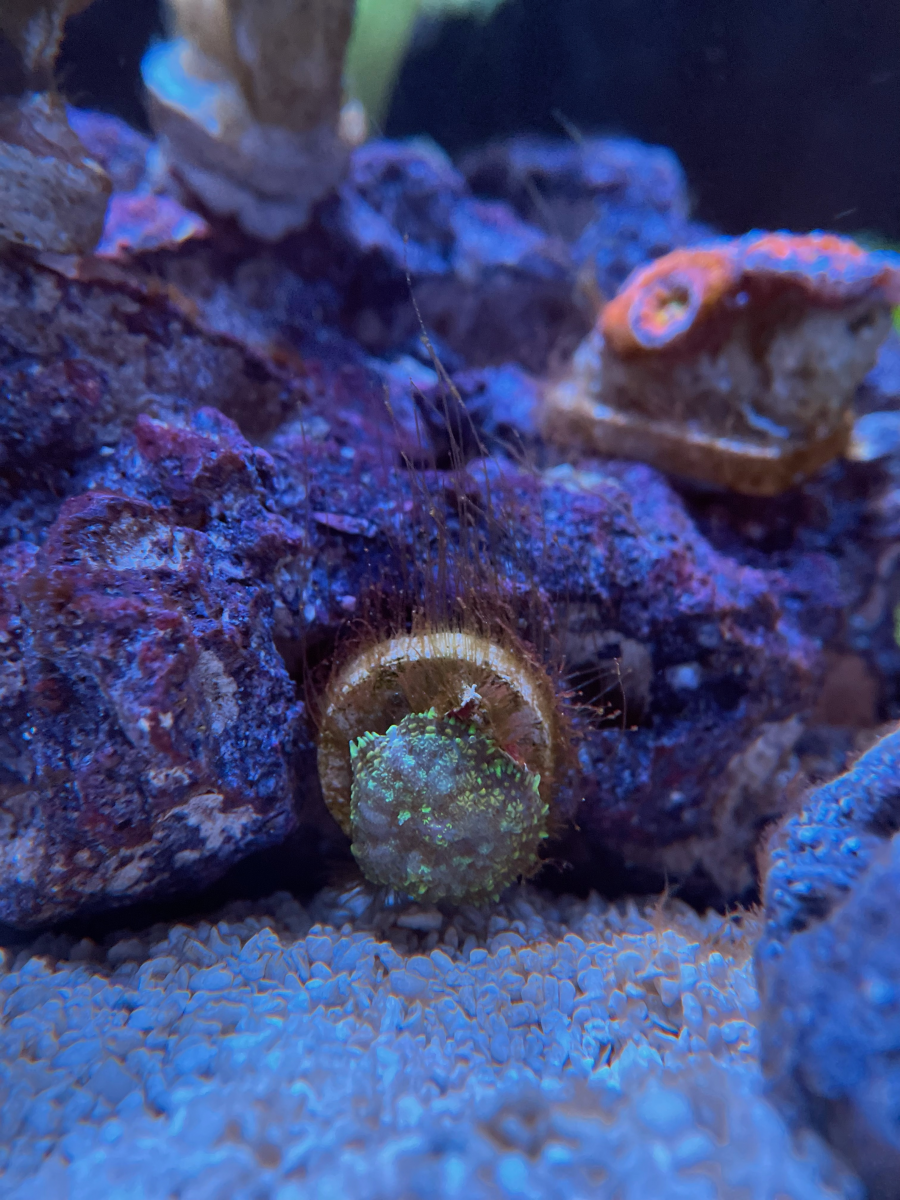 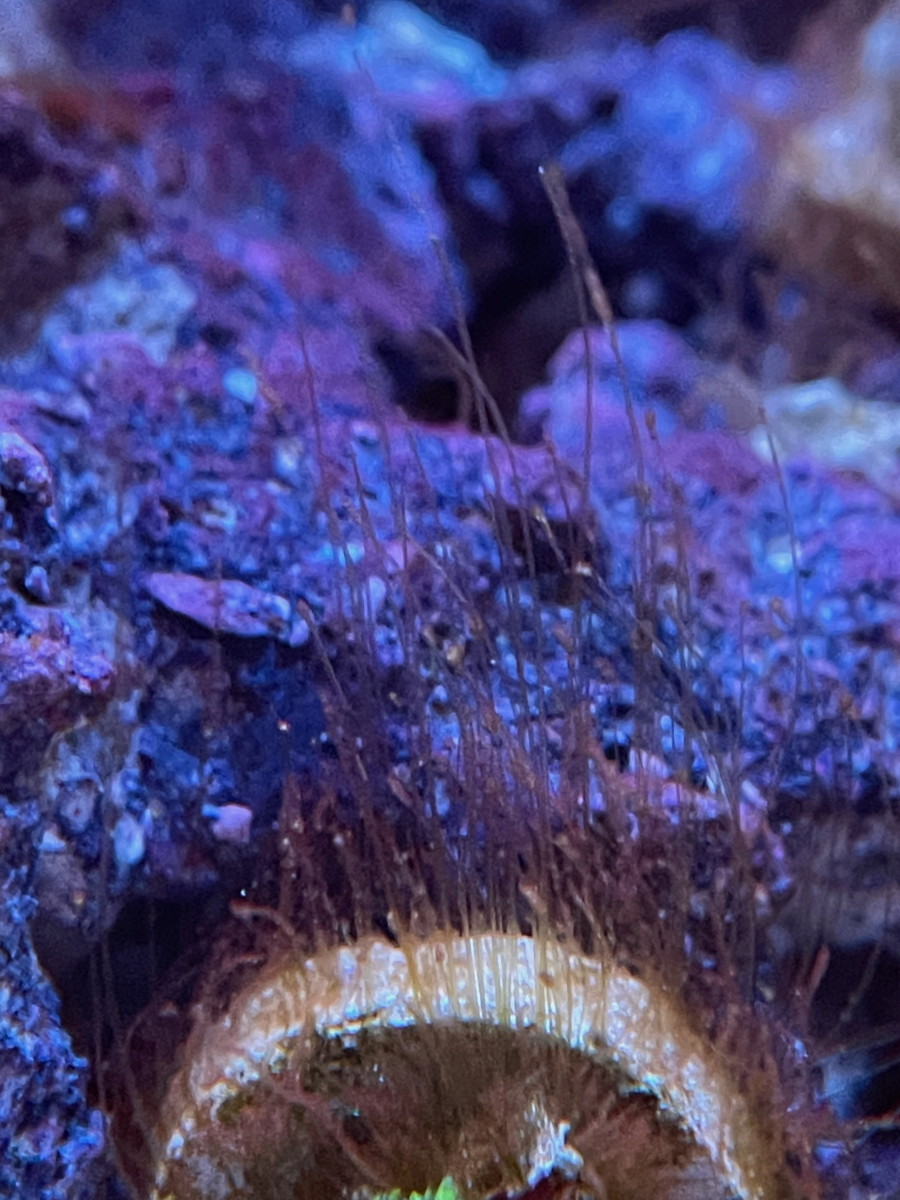