After being a silent member of R2R its time to start posting myself.
so lets start my build tread!
a few hours of fondling with SketchUp and there you go a brief idea is born. 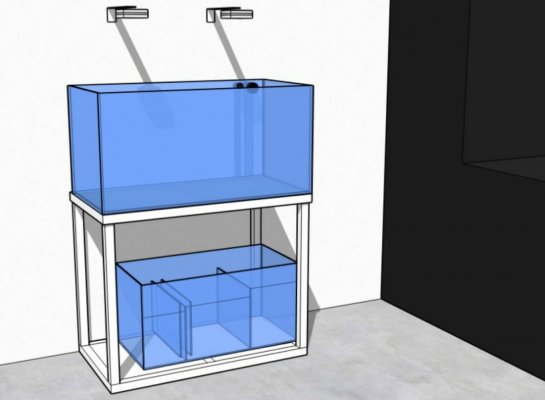 Dec 2020 - Its time to BUIDL! so my old Freshwater Puffertank was due for a change, after selling my waterpuppies the stand for the Reeftank had to be build.
starting with some 40mm (3mm wall) tube steel, cut it to size, get some nice 45' angels and lets weld her up. 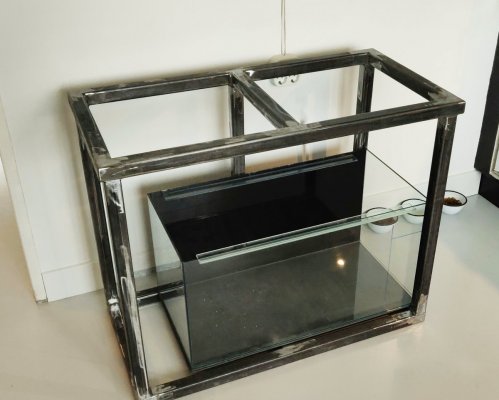 quick mock up with the sump in it, and off to the powder coater it is.
i've choose for a all white setup to keep it clean indoors, so the frame is coated in RAL 9016
and one week later i received a message with a picture to come pick it up. So of course another land speed record has been set picking it up (Joking). 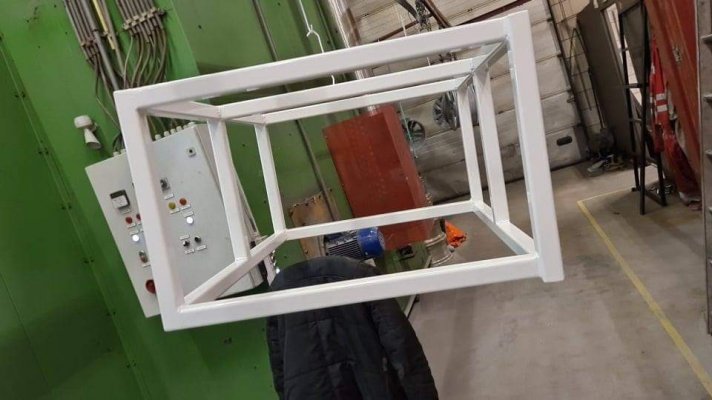 so now it was time to set up the tank, and scape it all!
first I started with putting a frosted film on the back of the glass to get the whole clean look.
added the overflow and started scaping, and here we go! 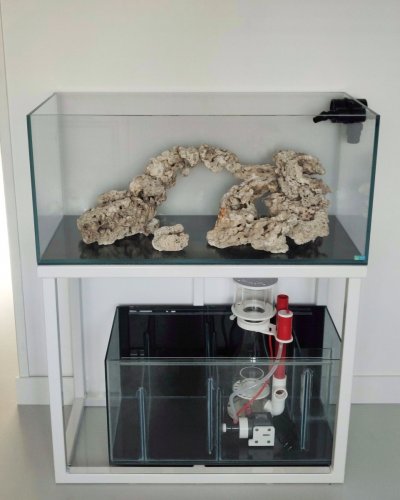 Could not have been happier!

Mixed up a whole lot of RO/DI water and filled her up to let the cycle start.
while waiting on the water I've started to dunk in two bags of Caribsea reef sand.

filled her up and lets start cycling!


Gotta do some work, so the story continues!

So the cycle has started, put in a piece of frozen shrimp to decompose.
I've waited a week or maybe two, not sure, before adding 3 kilo's of Caribbean live rock (order took some time). 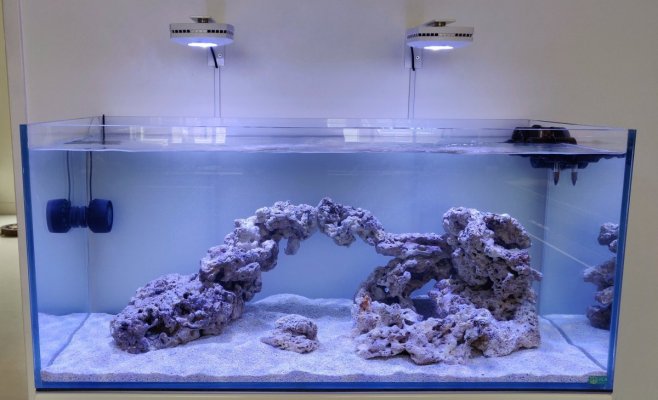 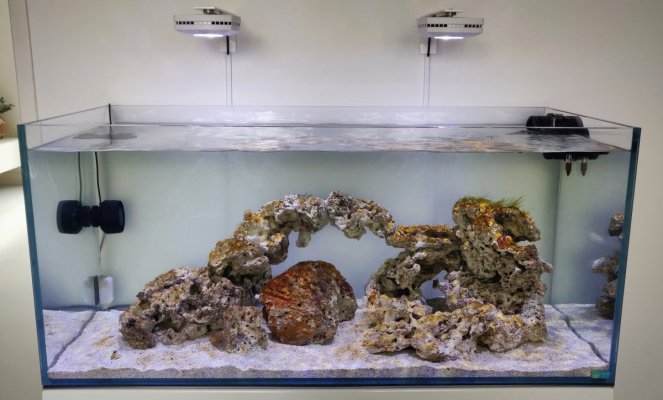 the difference you can see after only two weeks or so,

all the uglies have started to grow and the tank really started evolving.

One month has passed and the cycle was completed no measurable ammonia and NO2. NO3 and PO4 were measurable so it was time to have the first fishes.

So say hello to, Wobke and Ritse (named by my girlfriend, native Friesland names) 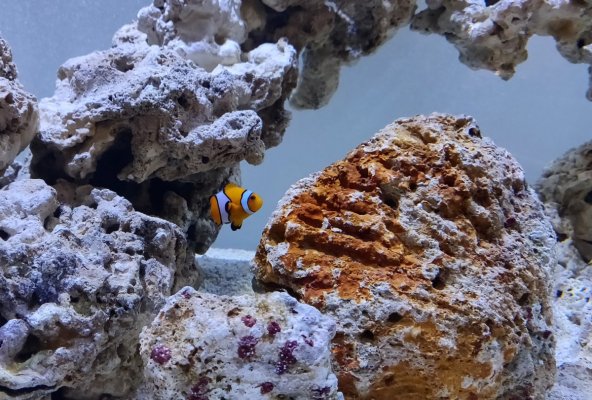 A pair of Percula clown fishes.

the ones with sharp eye will most likely also spotted my first corals, Zoanthids!
I've bought the following:
and of course like every reefer once you see corals under 100% blues your hooked and have orders coming in weekly.

so my zoa garden has grow pretty much, the following weeks I've bought:
and my tank was getting filled and growing happily.

next order was a bit of a bad luck one..
unfortunately the dragonsoul torch had damage to the skeleton due to i guess a drop during delivery, the box was damaged. had some good hopes to save it, but it got brownjelly within 12 hours of being in the tank.. and at the same time the chilipepper monti started browning and i knew something was off.

and yes it was, measured PO4 and it was at 1.0ppm! yes i knew it was a bit up due to algae growth but not that much. so this is where i paused my purchases of corals and started the long course of lowering PO4.

During this Cyano swung by, 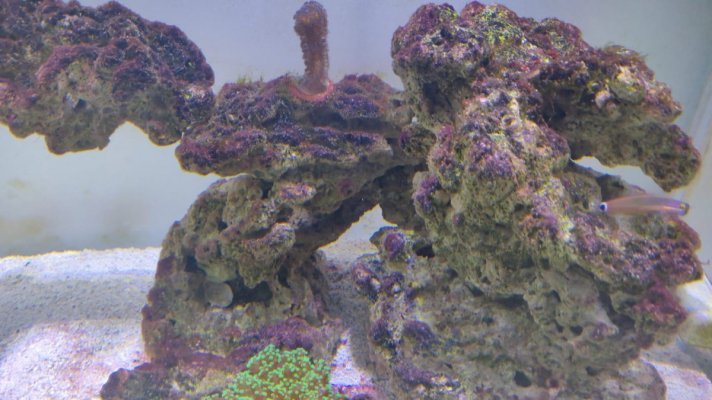 most likely due to the high nutrients. So i started doing 20% waterchanges every week and vacuuming off the cyano. but after 1,5 month I brought out the bigger gun, Cyano RX. and this worked like a charm, after 2 days it started dying off and the tank is now clean!

PO4 is currently at 0.45, yes, yes, I know still to high. i have a filter bag of GFO in the sump witch is slowly taking out the PO4, hope to have it at the desired level <0.1ppm after lets say 1 to 2 months.

So i guess this is where i stand now, love the hobby and cant wait to see how it all evolves futher

thanks! yea already learned a lot, just need to get the algae in check and the new corals will follow

I’m a fan of the aquascape. Tank has a clean open look to it, well done.
OP

SchrutesReefs said:
I’m a fan of the aquascape. Tank has a clean open look to it, well done.
Click to expand...

Thank you, exactly what I was going for, clean and simple but appealing to the eye.
OP

So this has kept me busy the past two days. Right before I had to leave house for a 5 days vacation I just did a few tests. My Hanna alk checker read 71ppm aka <4 dKh..

I know the cause, with my water change I changed my gfo and maybe by a bit more than the last time. I'm afraid I stripped my alk this way.

Now my plan is, once I get home Friday, do a large water change asap and start dosing more kalkwasser.

Quite stupid of me, my sps wheren't extending polyps at all but said well my shrimp love to munch them.

Some more I could do?

Also really like the scape! Can't wait to see this filled in

Build Thread My new to me 150g build thread.