Need ID of infection for Rabbitfish

I know we're not supposed to have favorites, but my Scribbled Rabbitfish is just my guy. He was the first fish I bought for my most recent tank, I got him as a juvi and he's grown so big now. I just love him, but I've also been fighting dinos for months and he's borne the brunt of the negative impact. Most my other fish seem unphased by any of it, but this guy, he's always stressed and requires a bit more care.

As part of the my treatment I've been dosing bacteria and a month ago he got an infection, fins were frayed and tattered, his eyes completed clouded up and blinded him. I was easily able to catch him and treat him in QT and get him back to the DT. I'm still continuing to treat with bacteria but at a much lower dose, about two weeks ago I saw his eyes getting a little hazy and his fins started to get a little tatty as well.

Thinking this was the start of another infection, I got my nets with plans to just have him stay in QT until I was done dosing bacteria. However he wasn't completely blind, and dang if he's not greased lightning in the tank. I look like I'm moving in slow motion when I go after him and my nets get caught on the rocks, it's a joke really. So I decided to get a fish trap, we're a week into it and he's just too smart for it. While I'm sure he'd love the frozen food he can subsist off the algae on the rocks and thus far refuses to eat out of the trap. I'm going to give it more time, as I've heard it can take weeks for fish to ignore the fish trap.

My concern is his current state. Thankfully his vision has pretty much all but cleared up, and his fins are actually healing now. If I'm honest the fins damage may be from a Starry Blenny who's been nipping at him while he's been unwell, could be the bites or just the stress. But either way in that sense he's doing much better. Clear eyes, healed fins, he's still got lots of energy, no labored breathing, and a HUGE appetite, guys eats all day. HOWEVER.. he's developed these dark blotches all over his body. 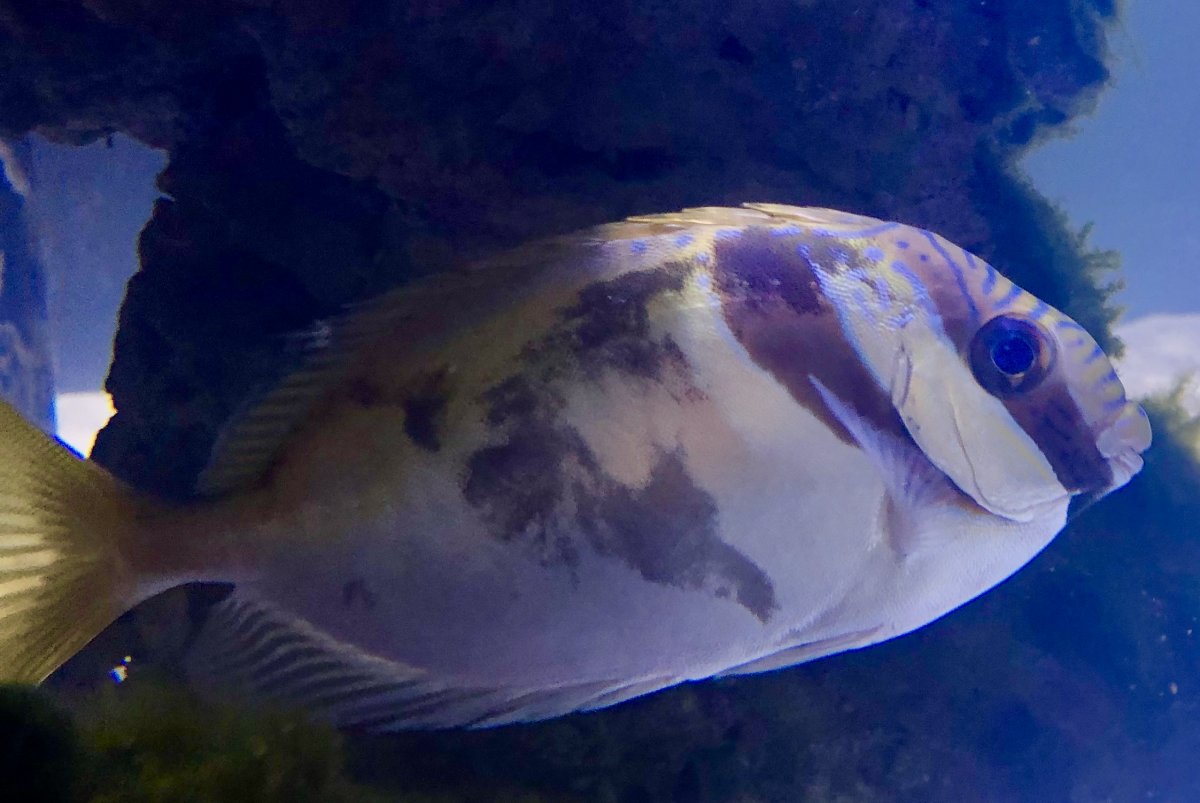 They don't look like bite marks, he hasn't been rubbing on the rocks or thrashing, they're not raised, as far as I can tell they don't really seem to be bothering him at all. But he just looks rough as ****! My questions are A) does anyone know what this is and B) what should my level of concern be? Am I overreacting, if his eyes and fins are healed is this something cosmetic that will just pass in time and the fish trap is only stressing him out. OR is this something I need to treat ASAP. Because as much as I don't want to I'll drain my 4x2x2 down to a few inches of water, pull all the rock out, and get him if it's what it takes to save him.

Any advice is welcome, also yes I've tested, all params in normal range mildly elevated PO4 at 0.2ppm and NO3 at 8ppm, but everything else is in line, even tested for ammonia which was not present. Also worth mentioning aside from bacteria once a week, I'm doing 3% H2O2 1ml per 10 gallons, so 10ml every 12 hours.
Last edited: May 23, 2020

Does he eat any seaweed that you may put in the tank? Also, do you have corals in the tank? I am thinking that you could try neoplex and focus (or just neoplex) )or maybe kanaplex) if its a bacterial issue.
Last edited: May 23, 2020
OP

The dinos have decimated my corals so currently the only pieces I could save are living in my frag tank.

He will eat seaweed, but are you saying you think this is a bacterial infection?
OP

@Humblefish
I know you’ve got quite a wealth of experience with fish disease. If you’re around I’d love to get your feedback.

Looks like some sort of a skin condition that needs some help. I'd get it into a QT and dose with Sulfaplex + Neoplex. Both wide spectrum antibiotics. Neoplex is of the same family as neosporin. So it works really well with skin conditions and healing.

Catching the fish. Wait until the tank and room is dark for at least a couple of hours. Using a small flashlight, find the fish and shine the light into its eyes and keep it there. It will mesmerize the fish, usually making netting much easier.