New to the hobby, but I read too much and now I'm paranoid

Im surprised this hasnt been brought up yet, throw out the API test kits. They notoriously have false positives and inaccurate readings, I wouldnt ever trust the results of one. If you want better results go for salifert, red sea, or hanna checkers.

To reiterate what I posted before, denitrifying is a one way chemical process that depends on several species of bacteria. The fish waste and decaying uneaten food produces ammonia. Certain bacteria then turn the ammonia into nitrite. Other bacteria turn the nitrite into nitrate. Finally, yet more bacteria, turn the nitrate into nitrogen which is a gas and bubbles out of the tank. Your spike in ammonia is worrisome. A nitrite spike may follow. If I read correctly this is only day 5 of the tank which I think is the problem. The cycling time is too short. Your options are frequent water changes, adding more bacteria, trying a commercial ammonia binder (there are several and can probably get at your local fish store), limiting feeds and frequent testing. It will take some effort but once the system is stable you can relax. Please don’t add anymore livestock until your numbers normalize. Watch your fish. If they start swimming in an odd discoordinated manner or stop eating they are then showing signs of toxicity. Don’t feel like this is a never ending battle. Once your tank is properly cycled you will likely never deal with high ammonia or nitrites and only wrestle with nitrates (unless the tank is rapidly overstocked or over fed).

Just to test 0.5 or even 2 says anything about the toxicity of the free ammonia gas (NH3). API test total ammonia (NH3+NH4) and the pH says how much toxic NH3 you have - please see this calculator

A quick tool for evulation of total ammonia measurements

Most aquarium ammonia test kits measure the total concentration of NH3 (ammoniac) and NH4 (ammonium). It is only the NH3 concentration that is toxic and the presence of each N species is depended on pH, temperature and salinity. The tool in the excel file is adapted for 25 degree C (77 F). At 27...

a fast check with total ammonia at 0.5 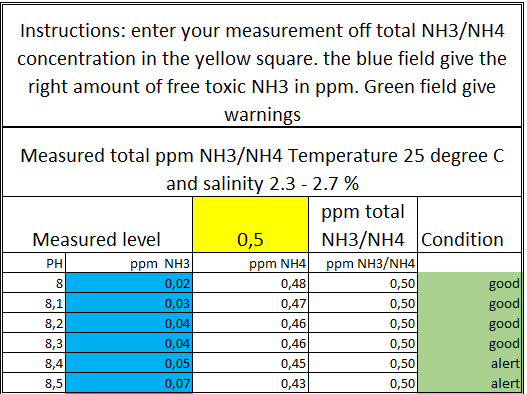 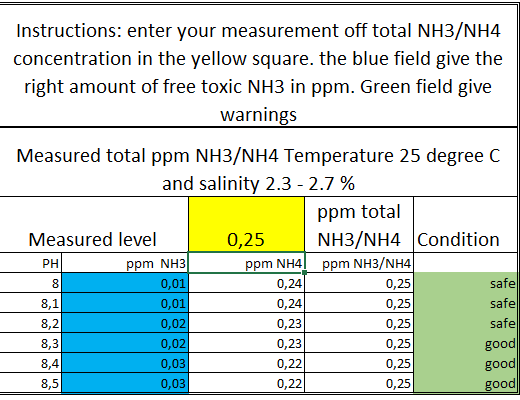 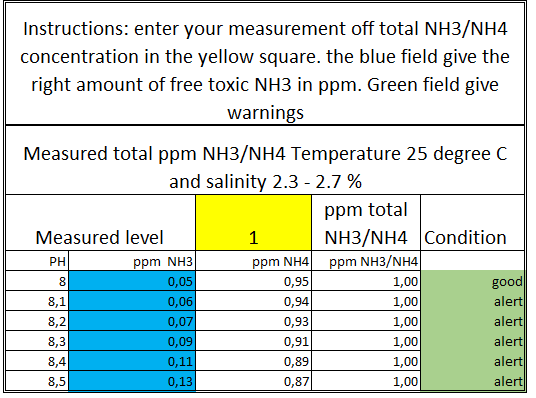 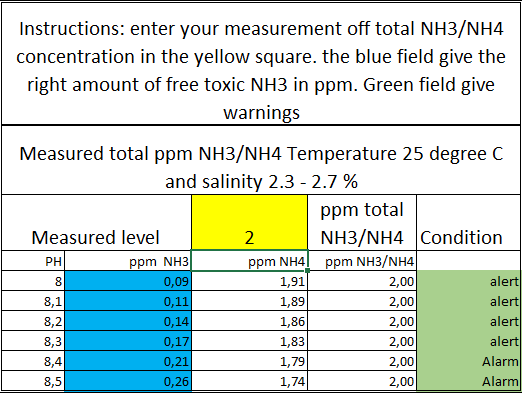 So using Lasse’s conversion charts and assuming by the posted tests that pH is roughly 8.2 and tested ammonia between 0.25 and 0.5 the tank is still in safe zone if I am reading this correctly

I think a good reference to get you through the early stages of the hobby is Brightwell’s “Nano Reef Handbook”. It’s for small tanks (15 gallons and under) but the principles apply to larger tanks as well. I read this cover to cover (it’s not too long a book) when I started and found it very helpful. It will demystify a lot of what has been discussed so far and help you going forward

My tank this morning started having a browning to my live rock. Thank you so much Lasse!! Your information is giving me a plan of action!!

dedragon said:
Im surprised this hasnt been brought up yet, throw out the API test kits. They notoriously have false positives and inaccurate readings, I wouldnt ever trust the results of one. If you want better results go for salifert, red sea, or hanna checkers.
Click to expand...

I have a Sow-4 wavemaker 1/3rd the way down running at half speed creating flow around the tank.

painfullycurious88 said:
I removed it since google said they're bad. It's still cool my tank is supporting life.
Click to expand...

google lies! I have had them for over 10 years and they are cute little clean up crew.
D

Yea dont trust google really but not necessary for the tank and sometimes can overpopulate fast and maybe eat some softies (not sure if thats true). Snails do a better job anyway

Tamberav said:
google lies! I have had them for over 10 years and they are cute little clean up crew.
Click to expand...

Update: there is a browning on the rocks

looks like diatoms, normal. though, congrats i guess because you wanted the ugly period lol,

May I suggest that to get a more accurate reading on your API tests, have the light over your shoulder, not towards your face as it is in these photos, hold the vial a couple of centimeters away from the chart and look through the center of the vial only. The light needs to be going straight through the vial, not at an angle. Read against the white background first. Then pass the vial over the color bars. The color that is least visible through the center of the vial is the right one.

I'm still confused after reading so much lol

O
New to the hobby

Jul 28, 2021
onlyfans
O
Z
Going crazy with the different things I need/don't need the more I read. Can anyone clear things up?
2