Hello! Ever since my old Macro Algae / NPS Tank ended up cracking and breaking (Bottom panel started leaking, and you can probably guess what happened from there ) I decided to pull the trigger on a new UNS 60U. Started this tank up on Easter and this will be updated constantly as I have some awesome additions coming for the tank
This tank is focusing on Macro Algae, NPS Sea Fans, OddBall Inverts, and some of the rarest nano fish in the hobby (To come this Summer

Equipment:
-UNS 60U (20 Gallons) 23.6 x 14.2 x 14.2
-Hygger Nano Wavemaker (1600GPH at max)
-Oase 100W Controllable Heater
-Aqueon OptiBright+ (Just a temporary fixture since the light that was on the old tank that I was going to use on this tank didn't fit since the glass is too thick, although it is pretty bright and has provided some excellent growth so I might get one that fits the dimensions)
-UNS Mini Delta Surface Skimmer

Current Corals:
-Porites
-Unknown Purple/Pinkish Sea Fan (Most likely a Plexuarid after talking to @cristata.reef on Instagram)
-Unknown Red, kind of curvy, with yellowish polyps Sea Fan (No possible ID on this one, but I didn't ask yet so I'll provide an update once I do)

I got both of these in a LiveAquaria Variety pack that was meant for Dendros and Sun Corals, but these were added as substitutes. I've had success with Red and Yellow Finger Gorgs in the recent past, in the last tank to be exact, but these are a whole new challenge. So far they've been holding on with 1 feeding per week in the past, but now I've been upping to a 1-2 time per day schedule in the 60U since moving them as I'm pretty sure it's a lot more beneficial for them, but the increased nutrients help feed the Macros. From coming in, in quite bad shape, to accidently destroying 80% of the tissue off the Purple-ish one by rubbing it against a paper towel while dipping on accident, this has been a wild ride but I think I've found out a stable schedule. There will be a lot of updates in this thread one these 2, especially the healing process of the purple one, so it'll be interesting to see how they recover.

Inverts:
-Christmas Tree Rock
I've had it for about 2 months now and it's been a joy! No hermits though, sadly but the worms on this "rock" are a different species than the other bismas that look like actual Christmas Trees pointed out by KingTideCorals which was a shock to me, but I still love them the same. There's roughly about 14-17 different worms on here, no die offs so far, and it seems like they're doing awesome. (P.S. If you're looking for similar Christmas Tree Rocks, Seattle Corals get's them almost frequently now so check out their website! I got mine from them and it's been doing splendid (Granted, I am local so I didn't do shipping but it should be fine)

Fish:
-Hector's Goby
Just moved this guy in for now from my Frag Tank since I've got a tad bit of Hair Algae (No infestation though due to the Macro's out competing it) and also have some Diatoms on the sand starting to appear so he should be a handy helper

Food:
@Reef Nutrition Phyto and Oyster Feast for the NPS / Bisma Worms and then Frozen Mysis / Live BBS for the Goby.


I hope for everyone that sees this that they enjoy this thread, and hopefully you follow along since this is hopefully going to be one banger of a tank 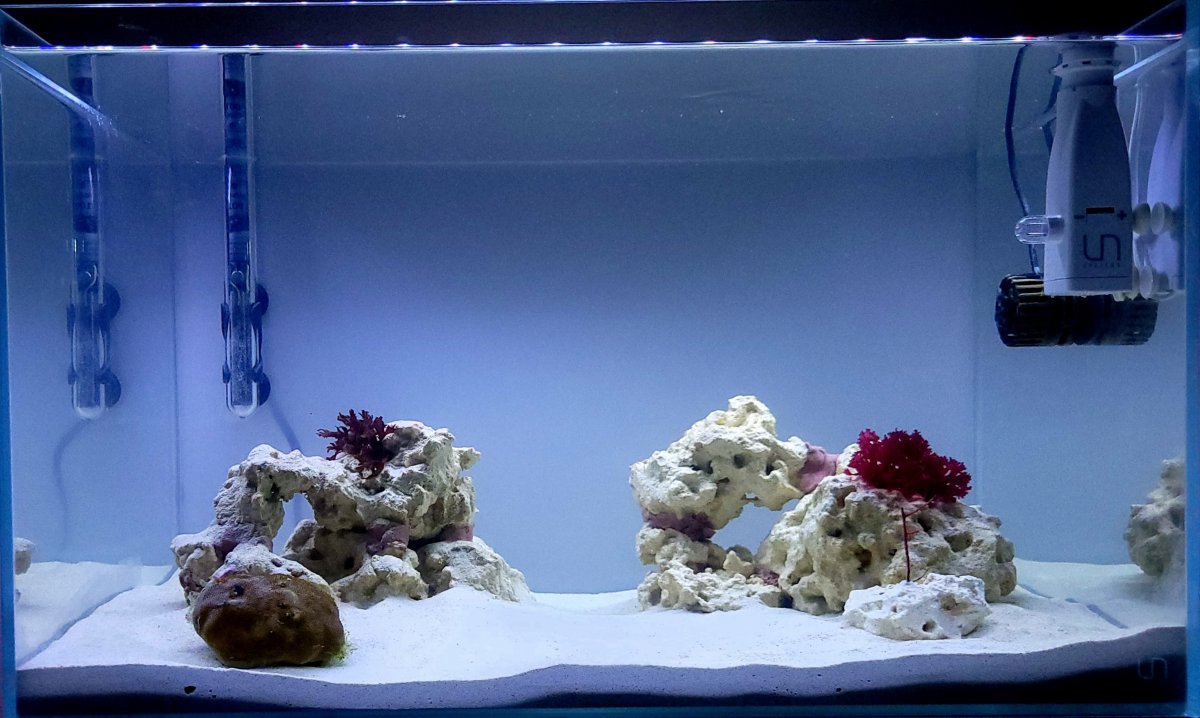 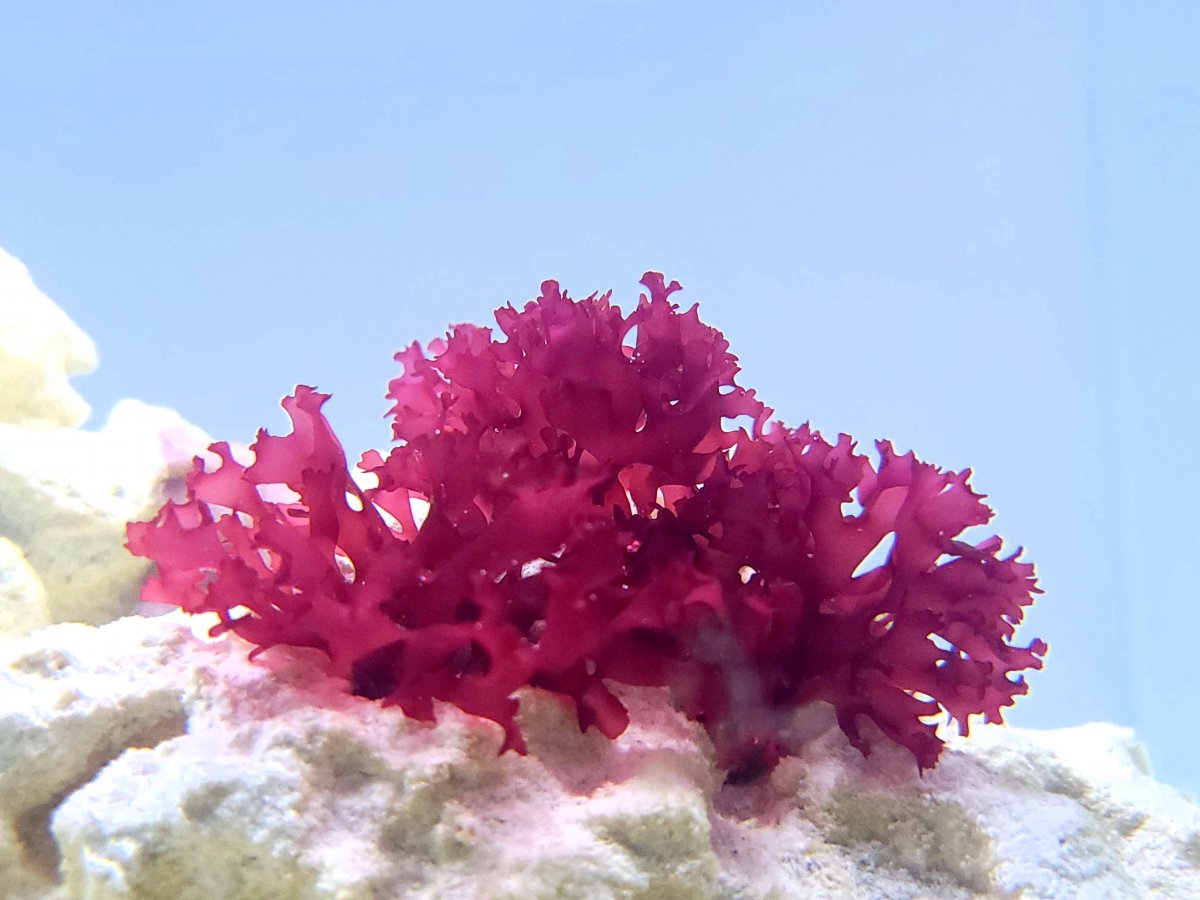 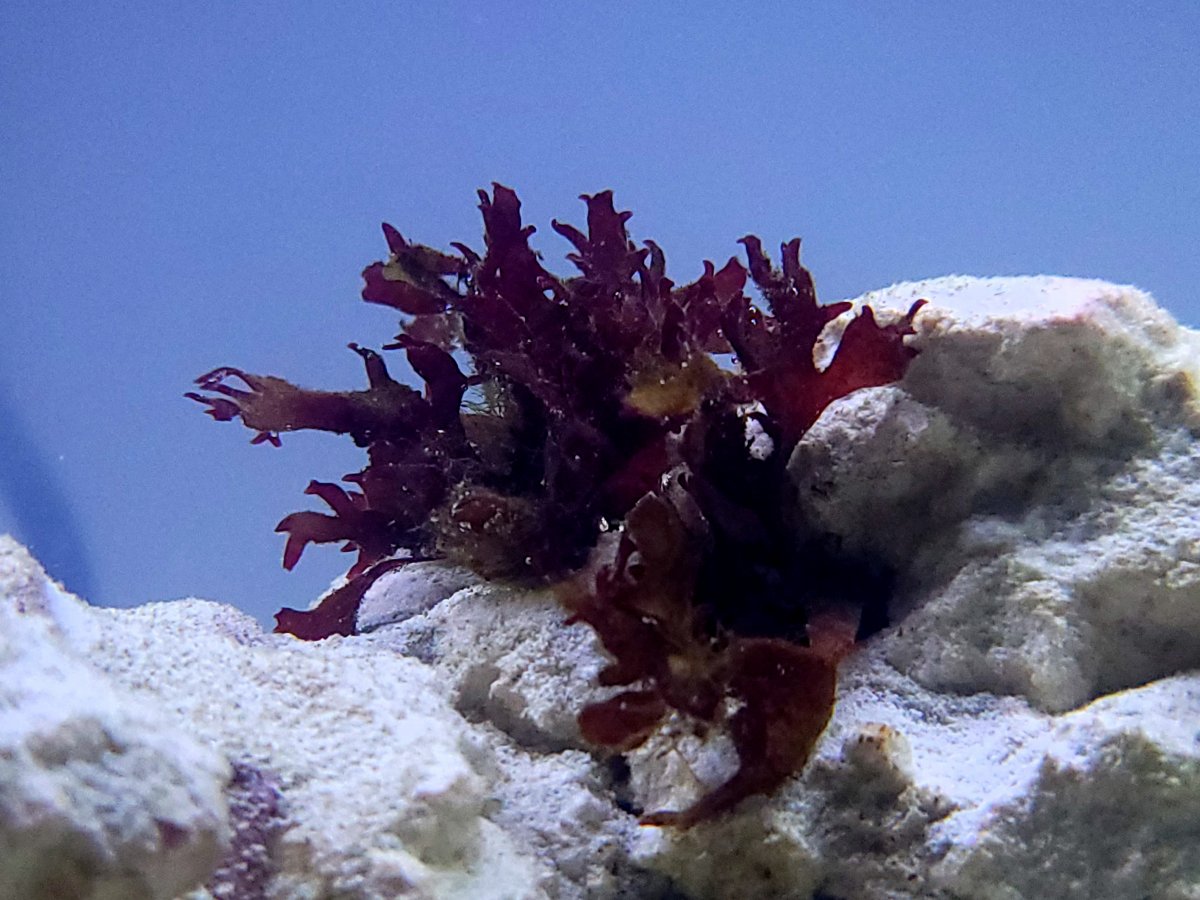 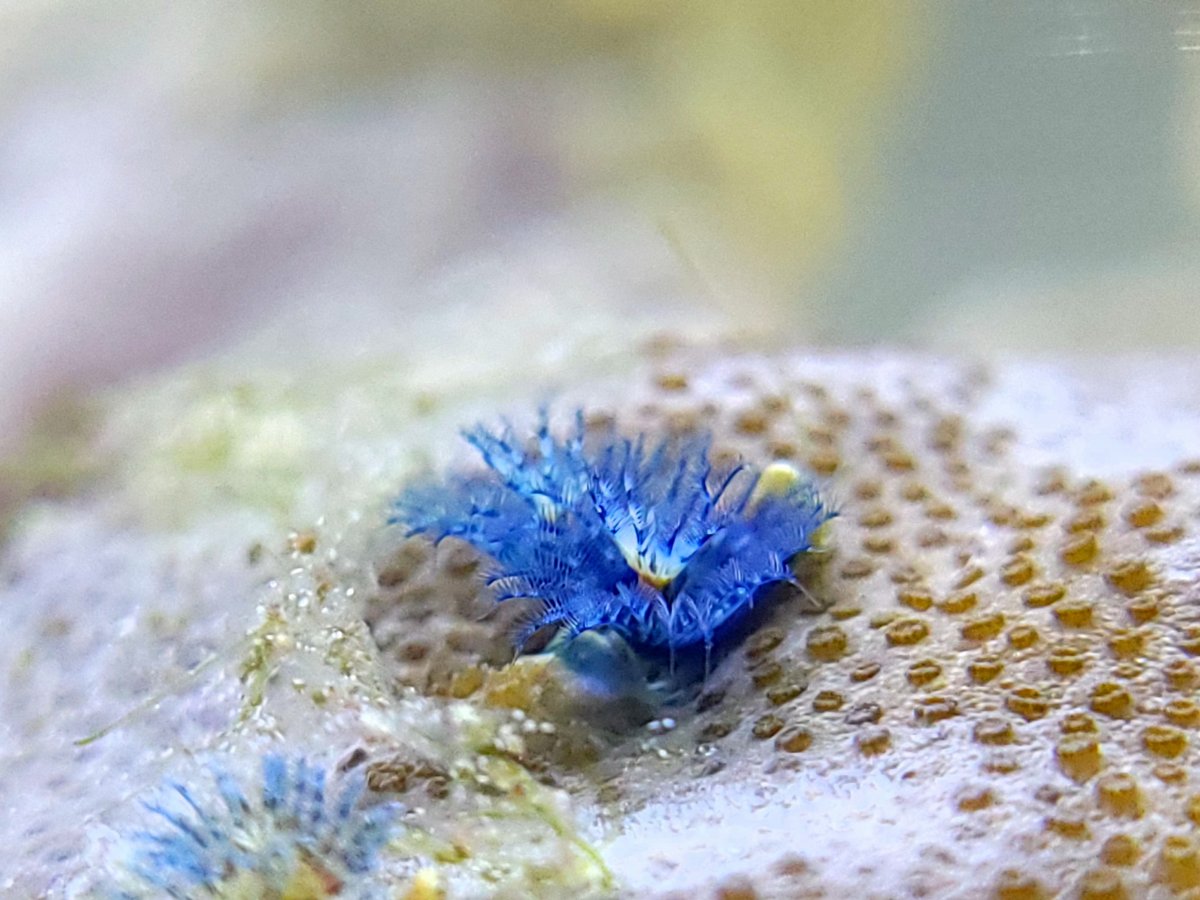 Mystery Red Sea Fan (This is how bad it came in, literally 85% of it is skeleton) But this is the most polyp extension I've seen from it so far so I have high hopes for it 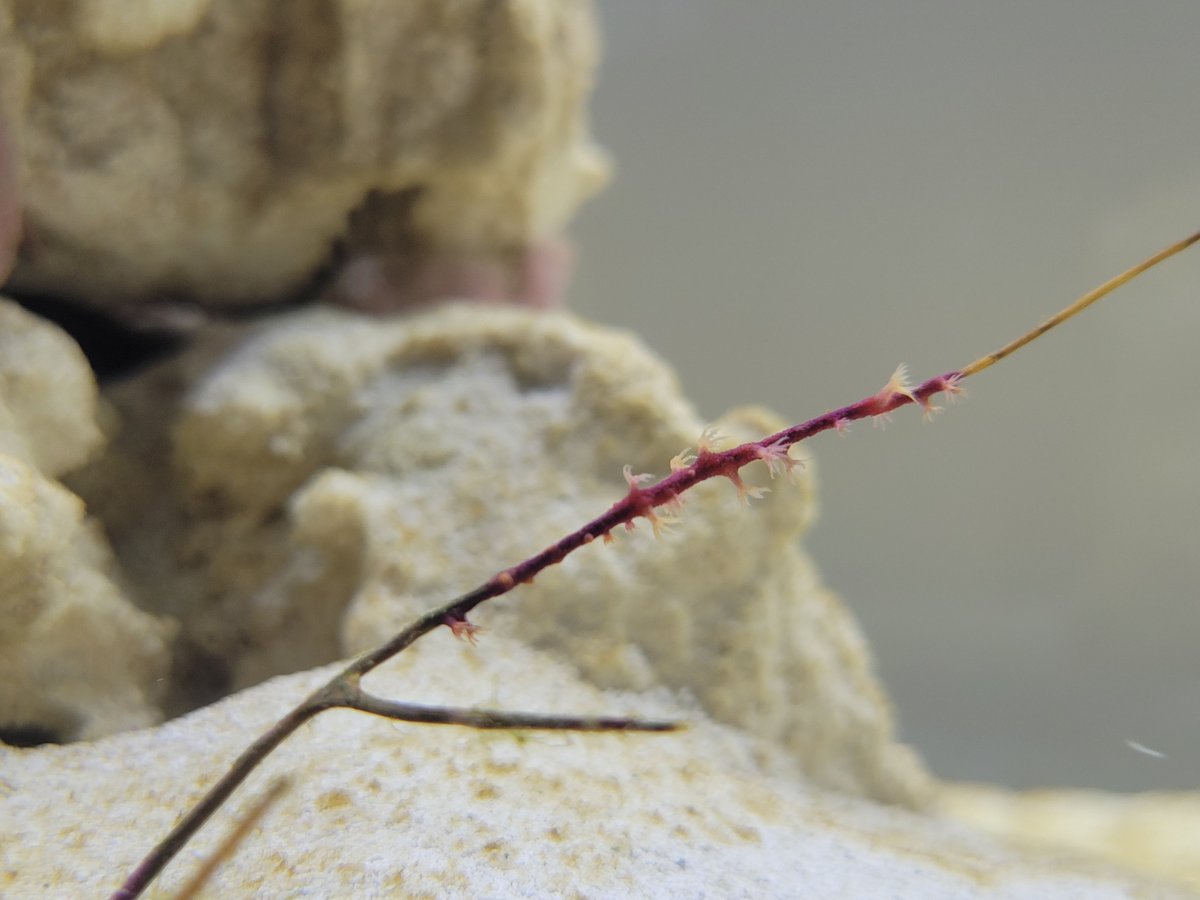 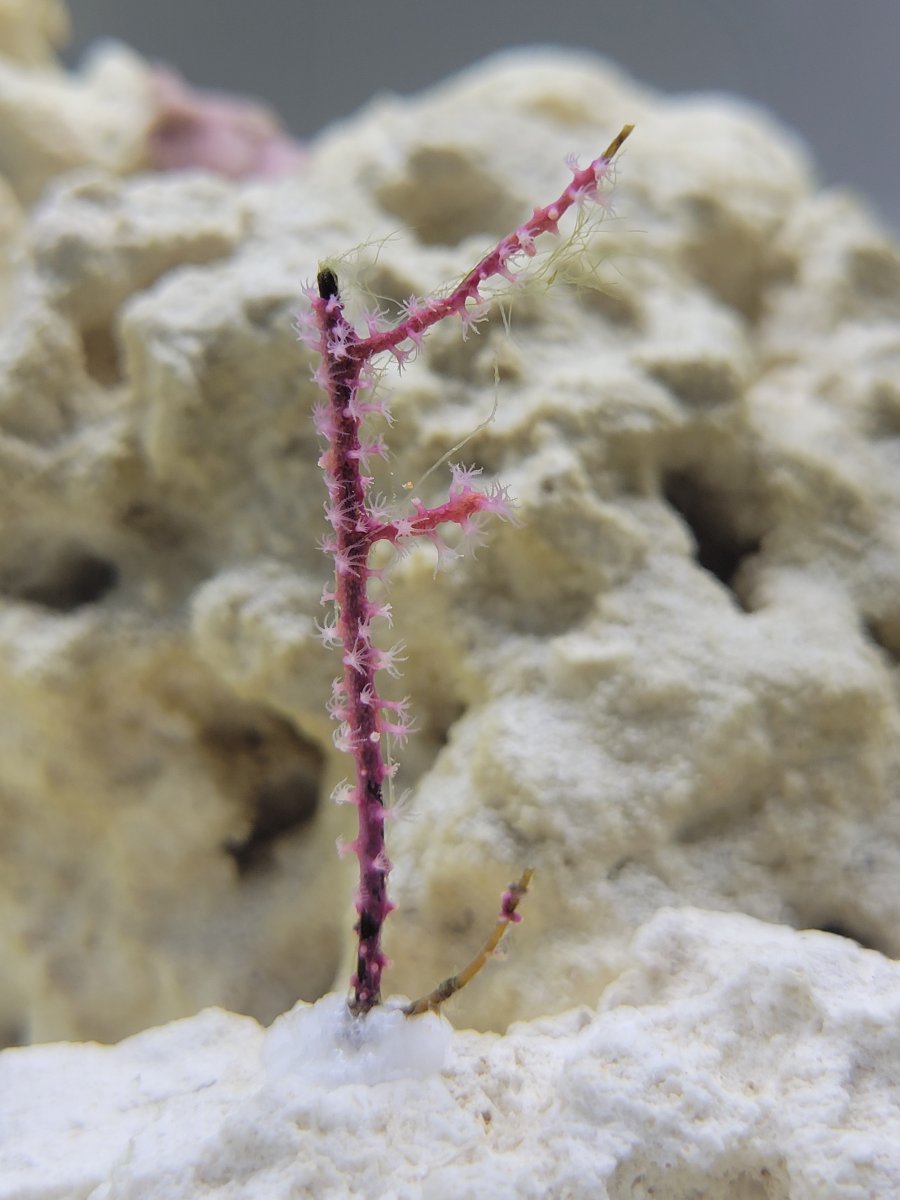 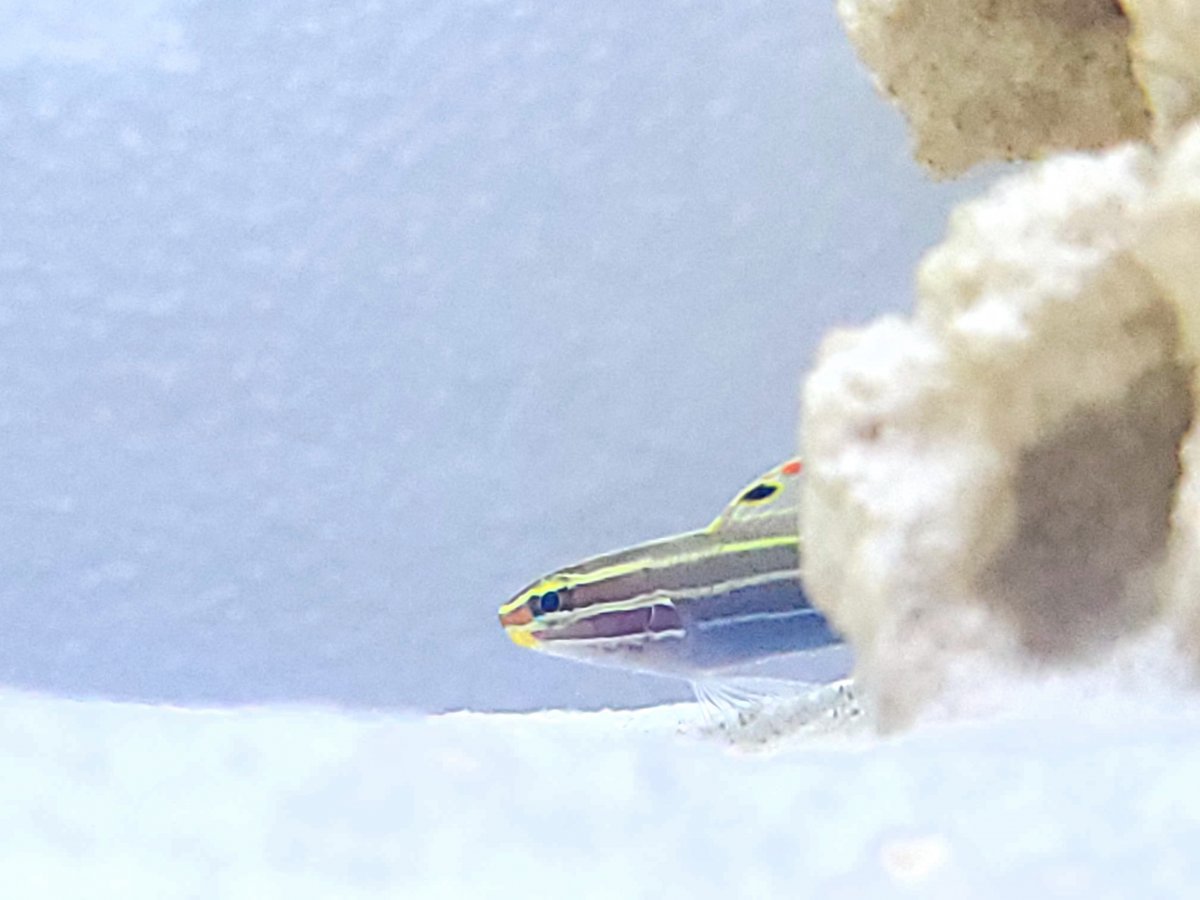 BEAUTIFUL! You know my deep love for all these things in your system!

Loving this thread so much, cannot wait to see continued updates on this one!
OP

Hi Blaine! Thanks for the support on R2R too haha
Speaking of updates, I might have some stuff coming this week (not in time for Macro Monday tomorrow though unfortunately) but It should add some nice texture to the rocks! Also the diatoms are hitting hard now so I'm bringing in some help with that shipment too

nice! I'll fallow for sure I do love a good macro tank. I hve a 20L maybe 5 years ago now ...wow time flys by eh? anyway I would love another if there was not a 2 tank rule in the house. was thinking of drilling the ATO res of my RS 650P for a macro display still might IDK.

Devaji said:
nice! I'll fallow for sure I do love a good macro tank. I hve a 20L maybe 5 years ago now ...wow time flys by eh? anyway I would love another if there was not a 2 tank rule in the house. was thinking of drilling the ATO res of my RS 650P for a macro display still might IDK.

anyway keep the pics and updates coming!
Click to expand...

Thank you, and I for sure will! I feel you with the "tank rule" (thankfully my parents eased up on it) but a display fuge would be cool for sure!
OP

The Diatoms have settled in and started their brigade onto the glass (which is why it's looks weird) I also took off the frosted background unfortunately, for some reason it just kept falling off and it was a pain to reattach every time. I can't tell if it was the brand I used or if air was getting in somehow, but I'll probably try again with another brand of film or a paper cut out close to the same color (excuse the clip on late on the back, I tried something new but thats not the light being used) 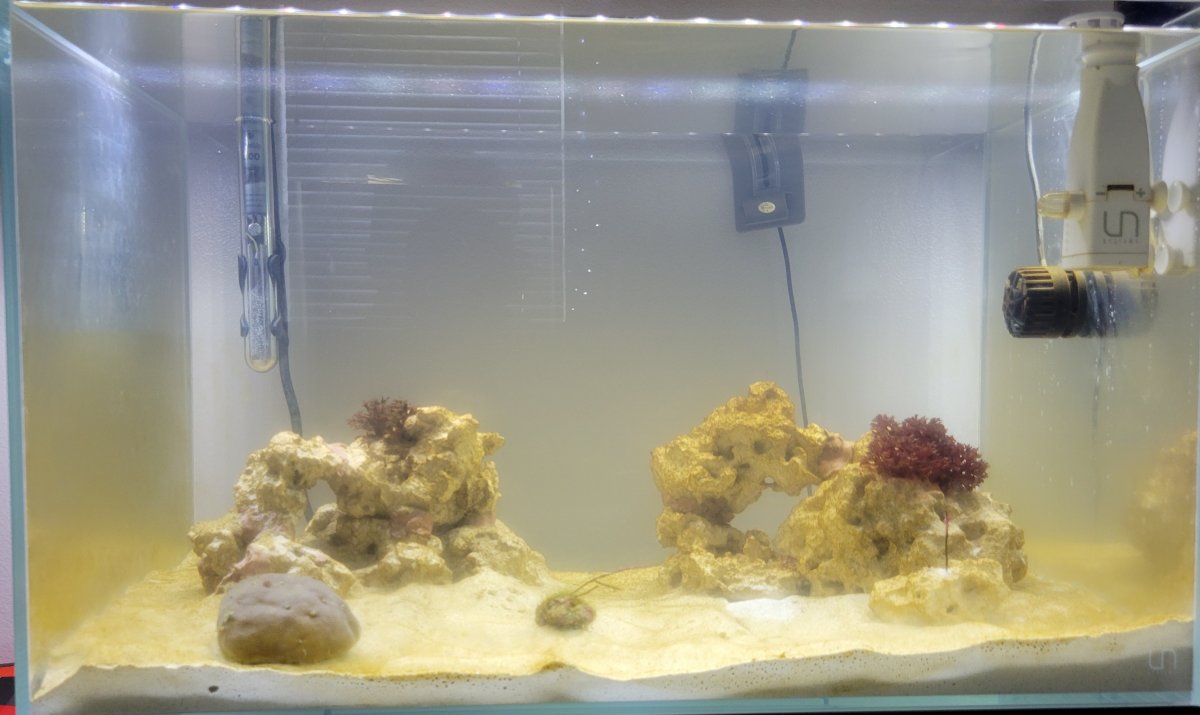 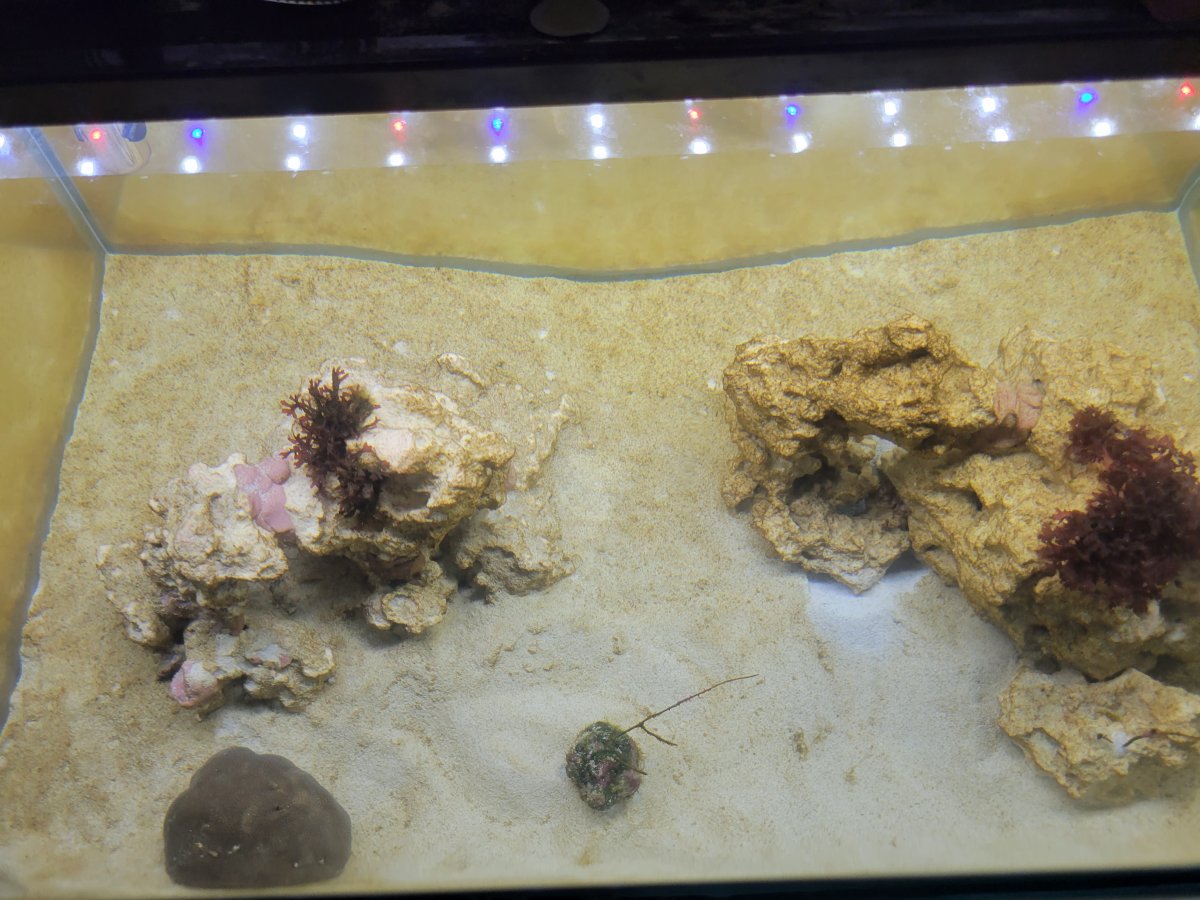 In better news, I have some new stuff coming (possibly today, more likely tomorrow) that should help with the Diatoms on the Rock and Glass so we'll see how that turns out!

I liked the frosted film look. you might need to drain the tank to get the new one on. IDK maybe not but if no tht would be a pretty easy task for that size of tank.
OP

Devaji said:
I liked the frosted film look. you might need to drain the tank to get the new one on. IDK maybe not but if no tht would be a pretty easy task for that size of tank.
Click to expand...

Yeah, I could probably get my Dad to help turn it around. I could try to stick it on the way it is since it semi worked last time but I think the the former is a better choice

Hi! It's been a while since I've updated anything on the tank so heres some words since a lot has changed!

Starting off with the bad:
•I moved the Sea Fans back to my Frag Tank, while they were doing "ok" in the tank, I moved them back to a more established system for the time being, my fault for moving them so quickly to a system that's less than a month old.
•And that's about it!

•Equipment Changes: Moved the UNS Skimmer out, it also got Diatoms and I'm only skimming once a week so It's only going in once a week.
•WaveMaker was moved to the back of the tank, I found a dead spot between the rock structure and now everything is so much better!

As for the new additions:
•Galaxaura 4/22
•10 Astrea Snails 4/22
Both from Gulf Coast Ecosystems (Live-Plants.com) Although they sell the Astreas in groups of 10, I ended up getting 13 so I moved the other 3 into the frag tank.
•Tiger Conch 4/25
•Skunk Cleaner Shrimp 4/25
Shoutout to Seattle Corals again for the sales! I ended up picking up the Connch for $10 but while their they also had the cleaners on sale for $21 so I saw my chance to get an invert I've always wanted

Also when I was adding the Galaxaura, I accidently split up the clump of Gracilaria Curtissae, so I ended up placing the clumps in a bunch of cracks but it looks nice!

Diatoms are still here, although the clean up crew is making quick work. For now, I'll be letting everything grow out for May. Might be adding 1 or 2 more things here and there, but im saving up my money for now for the BIG part of the tank for June, the fish. If you read the beginning post, yes, these are some of the RAREST gobies In the hobby, and I have big plans for them besides just being inhabitants of the 60U. 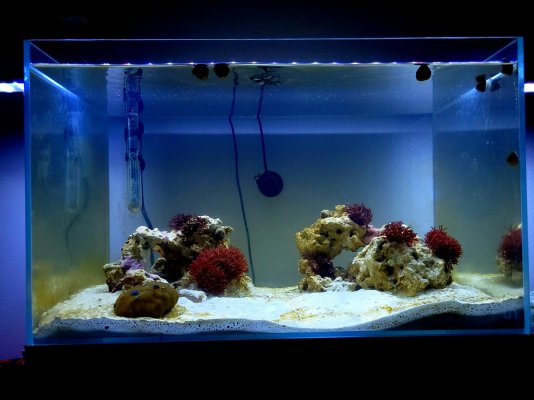 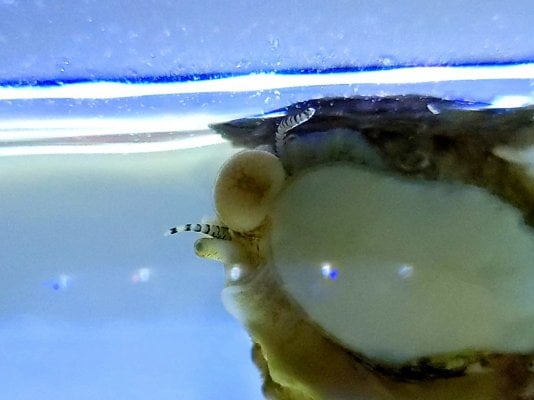 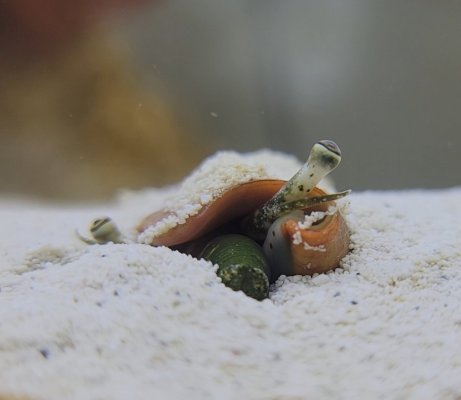 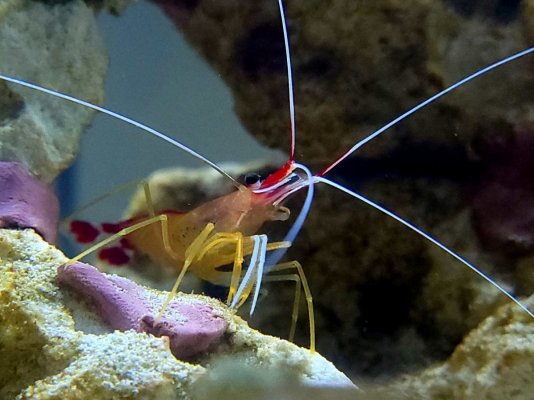 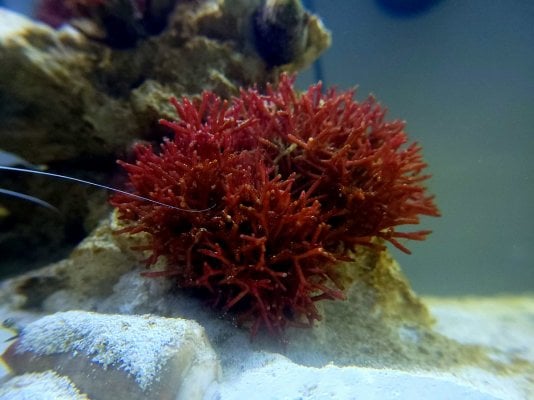 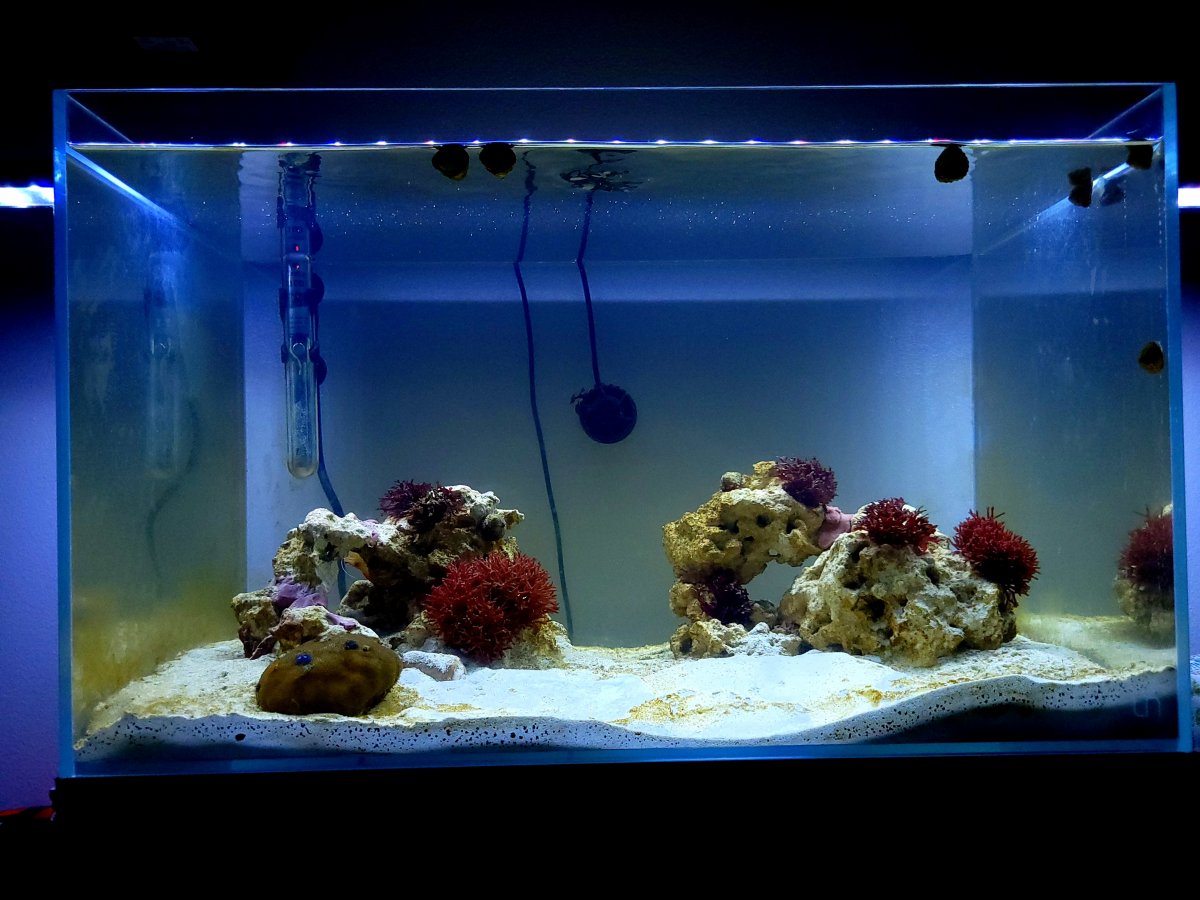 Hey everyone! Nothing new so far, although I do notice some new growth on the G. Curtissae and Galaxaura. I did make a video on the new updates that goes more in depth + a sneak peak at the plans I'm going to do with the gobies Click here
OP

Ok so going back on my word, I couldn't resist the urge so I got the Red Sampler pack from Gulf Coast Ecosystems, they don't have it in very often so I had to take the shot. Time to see what I get in a couple days! (Guaranteed 3 different species)

Single / Pair of Orange Spotted Filefish in a 20g?