Putting more fish in my 240

I have an 8 foot 240 gallon. I am on the fence about putting any more fish in it because or aggression and crowding.
Right now it has
Koran and emperor angels
Yellow, clown, tomini, sailfin and kole tangs
FoxFace
2 clowns
Filefish
6 green chromis
Starry blenny
2 pajama cardinals
Niger trigger

I had a bicolor angel, 3 lyretail anthias and 4 blue reef chromis in the tank but they all died in a single night when an electrical fault shut down my system overnight. That was months ago now. It somewhat broke my heart and I have not placed anything else in the tank.

The fish I have all went in the tank small and have grown up together and do well with a little tail smacking, fin flaring and chasing once in a while. My aquascape is such that they all have somewhere to go if scared and at night.

Some options I am considering. I am sure there are many I have thought of.

Another dwarf angel in with the large ones? I miss the bicolor a lot. The koran had muder in his heart for about 3 weeks when I added the emperor. I dont want to watch that again.

A group of 6 Vanderbuilt chromis

A wrasse, doesnt have to be reef safe, several fish already aren't. I do not have a deep sand bed.

A larger goby, I have a crushed coral substrate that is coarse in the tank though.

A different kind of anthias. The lyretails did not do well and I was losing one every 2-3 months. They just disappeared except for the last 3 that went in the disaster.

Or let it ride it's full. 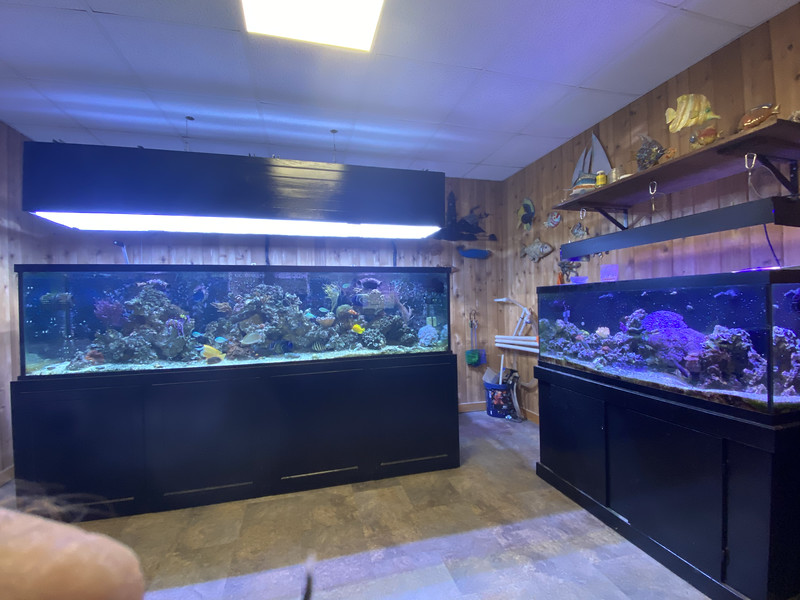 The 75 has 2 snowflake eels, 2 dwarf lions, a CBB and a two spot tang. Even though I feed a lot and throw squid/shrimp/silversides in every day. My filtration is fine, nitrates and phosphates are low so that isn't an issue.

@OrionN had a great technique that you might find useful. Print out full adult size pictures of all of your fish plus the ones you want to add and tape them all to the glass. How does it look? Too crowded? If not and if your nutrients are in check I say add some fish! Bicolor angels are very cool, I had one for a couple years a long time ago and really miss it

You already have some really nice looking and interesting fish in your tanks. If everything is getting along together, it may be best to resist the urge to add more fish for now.

I would recommend passing on the Vanderbilt Chromis. I’ve had them for years they’re quite timid and don’t do well with boisterous fish. Both of your tanks look great.

mixing a juvey koran and a young adult emperor?

Room for another large fish?