I am considering picking up a rainbow chalice frag for a decent price but it only has 2 of the colors present. It's a linnneaged pieces from a reputable source, but I am curious what the odds are of the other colors developing over time.

Is it necessary to start with a frag that has most of the colors present or do Rainbow chalice grow out true if only a couple of colors are present on the starting frag?

It's a crayola meltdown frag. I don't hacexa pic bc it's a local friend, but the frag has blue and green, but very little orange or pink.

stephj03 said:
It's a crayola meltdown frag. I don't hacexa pic bc it's a local friend, but the frag has blue and green, but very little orange or pink.
Click to expand...

Og Mummy Eyes ie Crayola Meltdown are different than what most refer to as a rainbow chalice. Those can developed the other colors as they grow out.

JaimeAdams said:
Og Mummy Eyes ie Crayola Meltdown are different than what most refer to as a rainbow chalice. Those can developed the other colors as they grow out.
Click to expand...

I am so glad I found this thread! I think I made a big mistake last night on a ebay bid! I saw the auction last minute so I went with it! The price was good but not good if it isnt going to grow the colors later! I got to thinking about it after I bought it! Does it just grow into a bigger piece of what you start with? Not like a jawbreaker for instance that develops colors later? I paid 199 for one that has a few colors but the other two I paid 92 and 84! One is a jelly bean and the other two are cb rainbow crush! I am going to attach a pic of each of the frags I won and the mom next to it and can you tell me what the chances are of it growing into a nice colorful piece like mom or just a bigger piece of itself?

I dont get how people frag these if all the color have to be in the frag! Especially as little as they sell them! How are you able to do that if you chop it all up? I doubt that you would be able to get many good pieces! I don think you can just take chucks out of it or can you and the rest grow back into a nice round piece! I have no experience in fragging but sure would like to be able to frag up the one I got! I may ask if I can exchange the two plain ones for something else. He sold some nice panty droppers that were 7 polyps a while back! If I cant I guess I wll try to sell it them and keep the nice one but not really sure if its that nice if its going to grow into a larger version like it is!

Do you think the second pic of the nicer one is just growing to grow half blue with green rim and half red with orange rim? If it is the that wont even be very nice! Dont even know I f I could frag it and get many good pieces later on! I know of a local one with lots of colors for 200 a piece but I i only got this thinking I could have 3 nice looking ones for less then buying 3 nice ones not even considering they may not grow into rainbows!

JaimeAdams said:
Og Mummy Eyes ie Crayola Meltdown are different than what most refer to as a rainbow chalice. Those can developed the other colors as they grow out.
Click to expand...

Are you tell me that a crayola meltdown is the same thing as a mummy eye? I am in the process of buying a craoyla meltdown now! 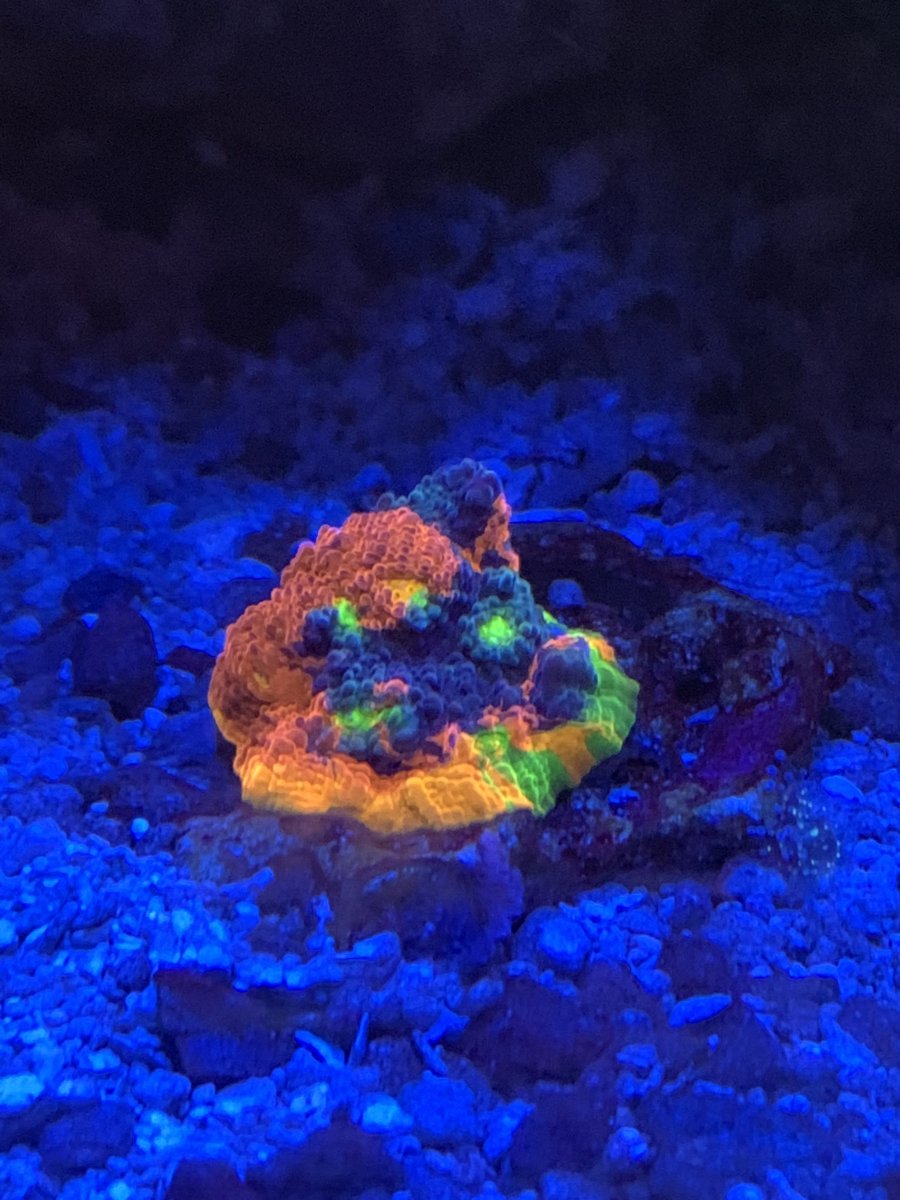 Is this for sale who is TCK

nano reef said:
Are you tell me that a crayola meltdown is the same thing as a mummy eye? I am in the process of buying a craoyla meltdown now!
Click to expand...

Yes, Crayola Meltdown is generally a piece of OG Mummy Eye with all of the colors represented.

Thats crazy> this the mother of what I got. Really not that pretty. I do see th e colors of the mummy eye but how do you account for the colors in the middle? After i read this I id some reseach and someone was selling a mummy eye that had been stung and develop some crazy colors with the regular mummy colors! Maybe thats all I bought is a stung mummy eye. lol He was asking 250 shipped and sold them all in a day! do mainly wants it as an investment piece and the cb fireworks was only qoo! cam with it for 100!

Is this going to make a colorful rainbow chalice? Do RB chalice just stay colors they are but get bigger or do more colors come in?

D
OG BPC Flamethrower, anyone still have one?

Recommendations on some classic must-have acros around $50