Readings during a Cycle. 0 no2

For anyone who can help. It's been many years. So I'm rusty here. I dosed Biospira 4 days ago(tank set up day before). Added 2 clown fish and some small amounts of fresh mud from the salt water marsh behind my house. I've been monitoring Ammonia, nitrite and nitrate
today it appears at a .2 Ammonia, 0 nitrite, and 5ish on the nitrate. What is this showing me? Yesterday ammonia was at .6, then then .4 the day before
here's tests today (red sea) 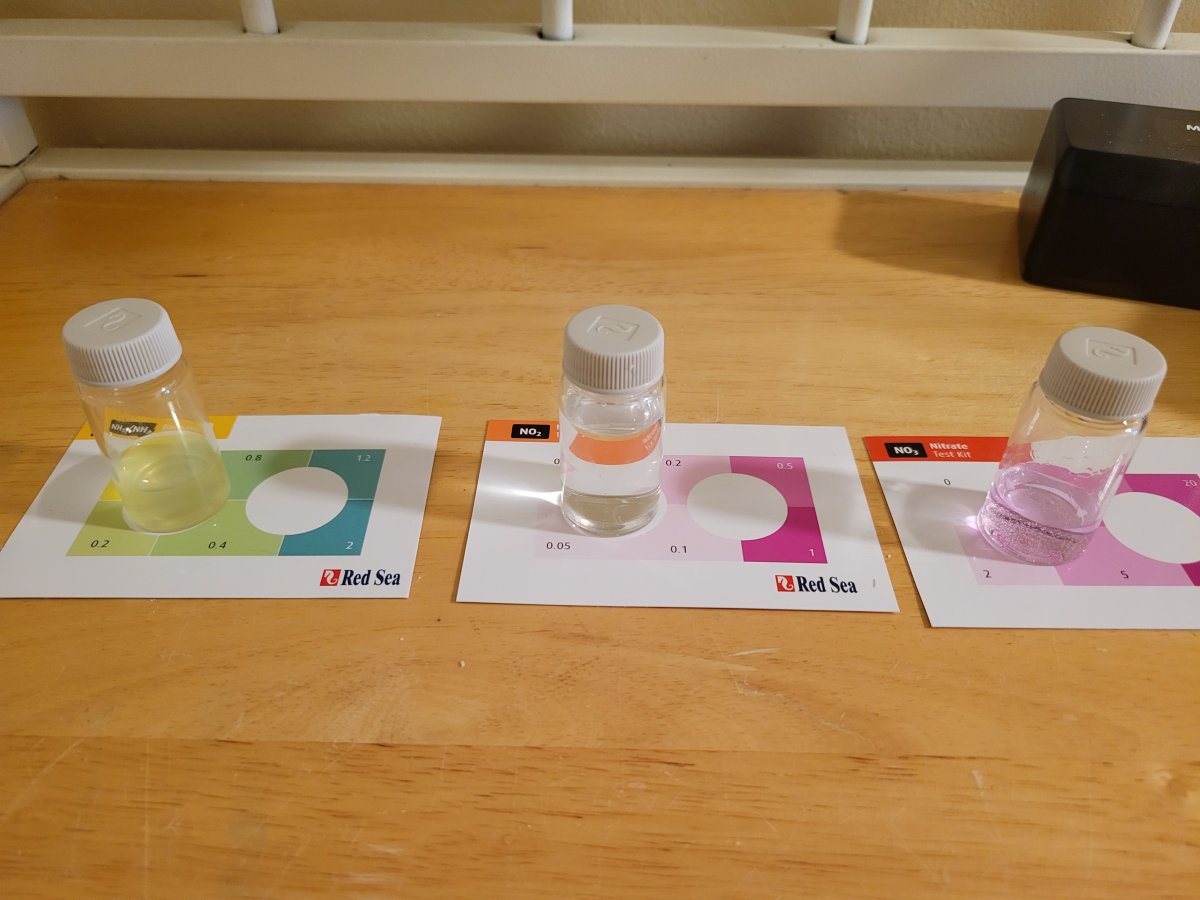 you dont need to, nitrite isn't needed to know in updated cycling science.

here's why your cycle is done: you are day 4 and could carry a whole tank of bioload day 1

a ready cycle is defined as the allowed start date an intended bioload can be carried...even if you changed your water there are enough bacteria adhered in 4 days to remain, and the filtration remain active. you arent planning on doing a full water change, so there's no risk anyway.


read this thread, see how he worked his tank far harder than you did? your fish are fine because ammonia was controlled as soon as you added the bottle. stop measuring for nitrite, it will cause you only doubt and repeat purchases of bottle bac to no benefit. your cycle is ready, its already in use in fact. if you put two clowns and fed them in an uncycled tank, within 4 days all the water would be cloudy and they'd be dead.

I just started a new tank a little over a week ago. I started with all dry rock and new sand. I added a bottle of Bio-Spira and put fish and coral the same day. Never saw any ammonia and fish and coral seem healthy.

That's fine. So is what I'm seeing then that I'm able to process ammonia to nitrate but not at the capacity to which the clowns and feeding create?

your tank is processing ammonia and it doesnt matter to what degree the throughput is nitrite or nitrate, only ammonia control matters in updated cycling science which always has a clear start date for any tank inquiring and never considers nitrite at all. the ratios that happen after initial ammonia conversion simply don't matter since we're not in freshwater tanks, or it would tremendously. nitrite is expected to be high here for a month or two, with zero consequence because nitrite is neutral and can't harm anything in a reef tank.

that guy above built a whole reef in one day off one dose of biospira. you are asking far less work for the initial job here. a second handy benefit in updated cycling science is that direct example links using other people's tanks are available to proof claims, he's literally got what you have and you can see how your tank is about to unfold over months coming, especially dependent on your fish disease protocol selected.

your test kits aren't accepted as correct anyway, who knows what your nitrite really is unless that's a digital hanna low range nitrite meter. I figured it was a color tube assessment kit.
T

Little c big D said:
That's fine. So is what I'm seeing then that I'm able to process ammonia to nitrate but not at the capacity to which the clowns and feeding create?
Click to expand...

No. That ammonia test should be interpreted as clear.
You saw it decrease from a higher value to that color, and these total ammonia tests react a small amount with organic N in the water such as proteins, amino acids Etc.