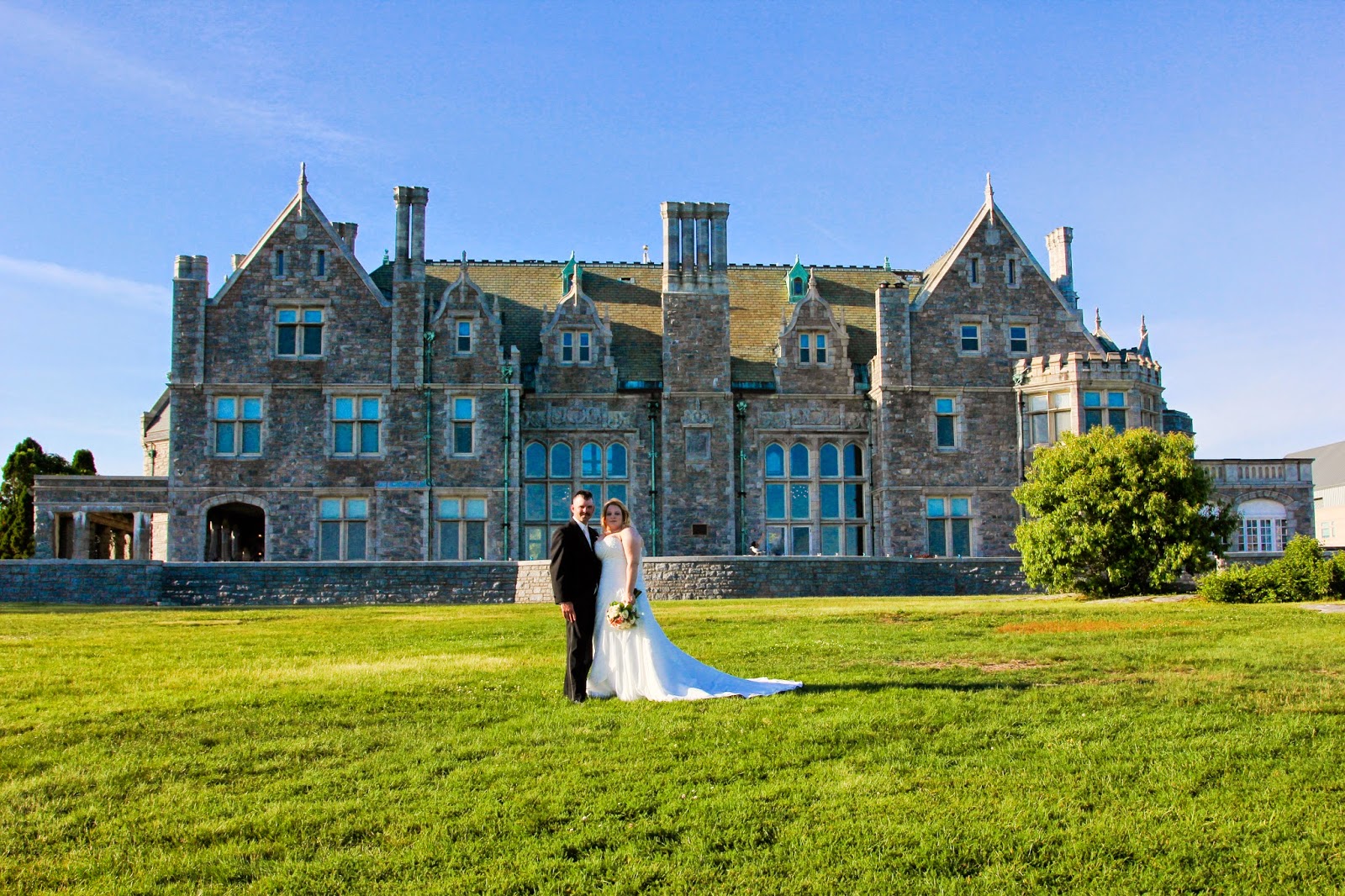 The wedding cake and the tank underneath was one of the most stressful projects of our wedding. Before we even began our planning...before we even got engaged, Chris had already planned to have a saltwater tank under the cake at our reception after seeing it on someones post on one reefing site. Of course ours would have to be different in some way, and by god, I knew for sure the cake was going to look far different.

I picked out the cake early on and one of our friends, fellow reefers and club members, Amber offered to make the cake for us. She is a pastry chef and was excited to take on the task and use the cake as part of her portfolio as well. 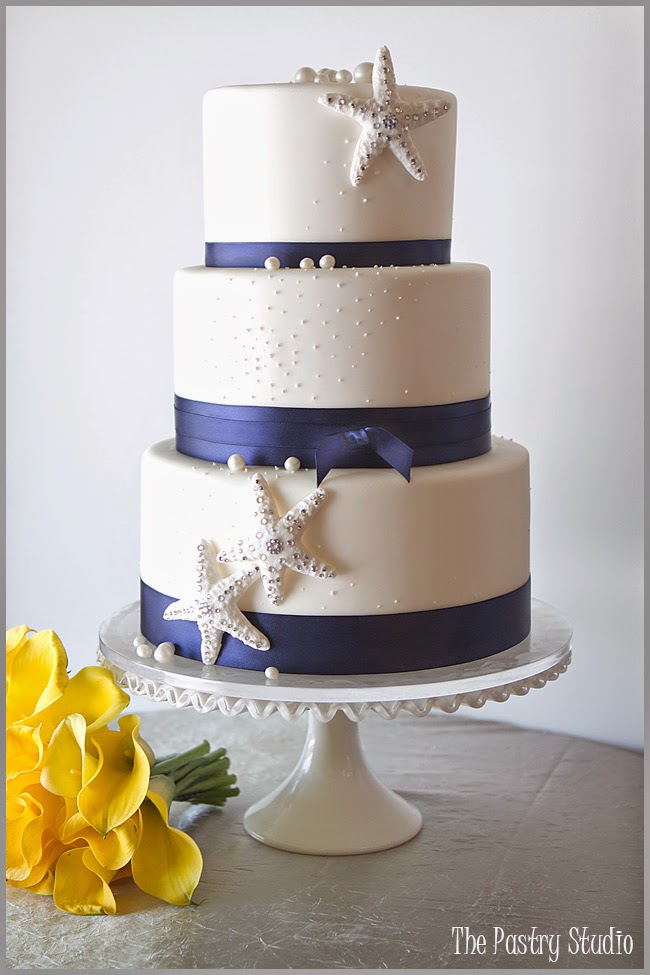 The cake I picked out​

Going to wedding expo's and even talking to my caterer, most were angry when I told them about the idea and that I already had a baker...the caterer especially. The catering came with a cake already which meant I was paying for a cake I wasn't getting and she reminded me of this often...

Chris, who would be named Groomzilla once we started the cake planning, decided at some point that the cake couldn't be a normal size for the guest count of 100-125 people, it needed to be approximately 20 stories high to match the tank. Yes, I'm exaggerating a tad...but, seriously, not by much. 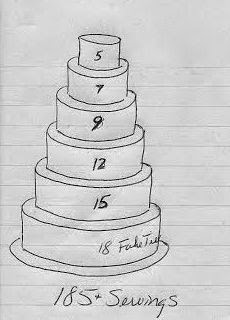 We would send Amber text messages with the size of the cake on a weekly basis for a while. For some time, it was looking like we might go with the caterer because Groomzilla was getting frantic. Finally, Amber said everything would be fine.

I had decided I didn't want cake toppers, I instead wanted my 'toppers' inside the tank. While strolling through the internet I found the cutest starfish with just a top hat and veil. Since our wedding had somehow turned into a starfish themed wedding I thought these were perfect and decided I would make them myself. I found some ceramic ones at a store and used an earring of my grandmothers as the bouquet that the bride starfish held. Although no one else would know the sentimental value of this tiny element, I would and that's really all that mattered. It wasn't until the night we were setting everything up that Chris informed me that we wouldn't be using sand in the tank and he epoxied some live rock to the bottoms of each starfish.Then there was the tank itself. This is where the term, too many hands in the cookie jar comes into play.

We had Chris' father, Emery build the main part of the tank and put it together to his and Chris' specifications.

When it arrived at our house, Chris finished off the edges with a blowtorch.

A good friend and another fellow reefer and club member, Jas provided the rest of the led lighting we needed. The lid of the tank had been given to him to wire together and pop in all the led lighting. 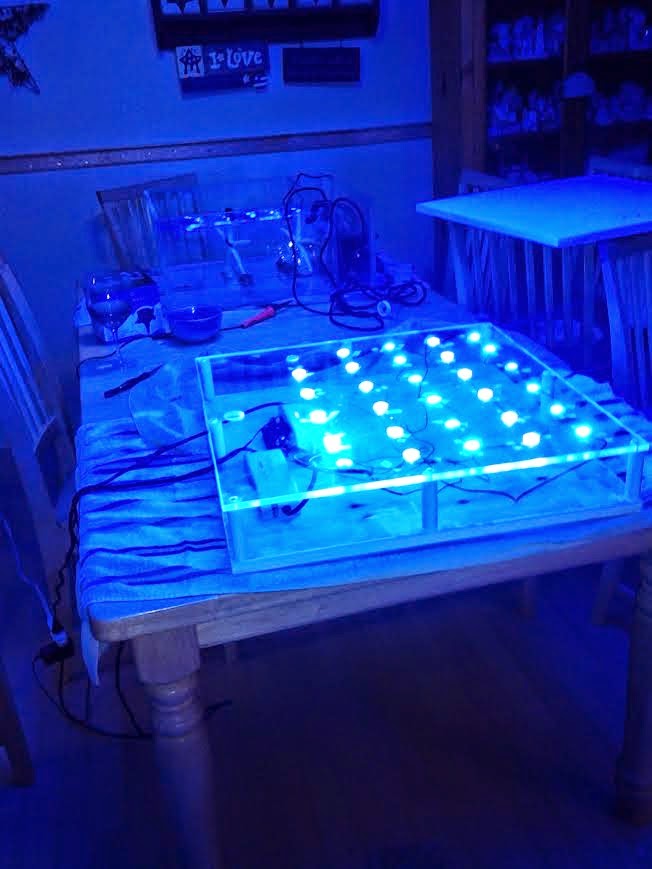 The top of the tank was made of wood which was told to me last minute (days before the wedding when every good bride is already on her last nerve) so, I had to come up with a way to cover the thing and make it look pretty... 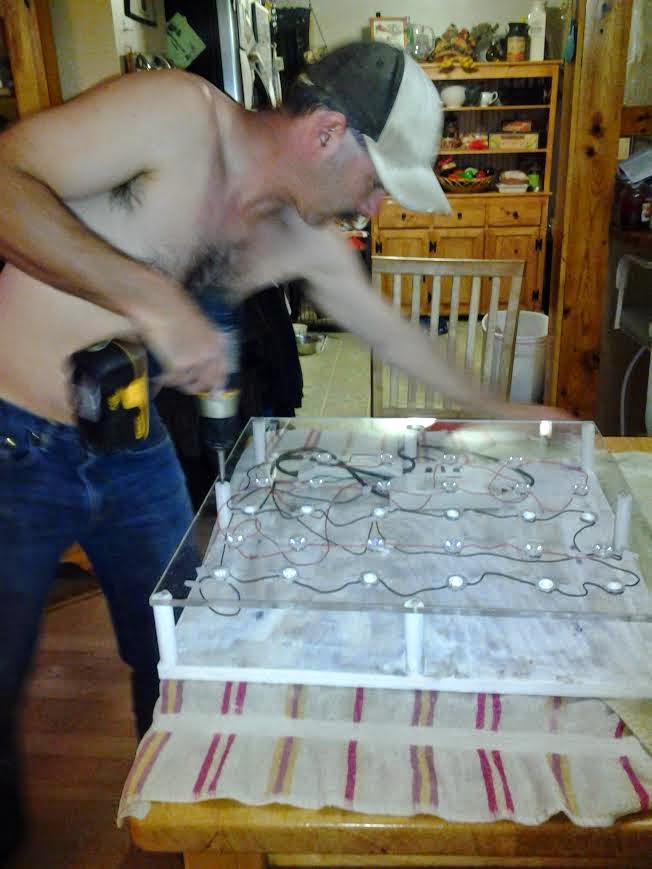 Chris attaching the lid of the tank to the top 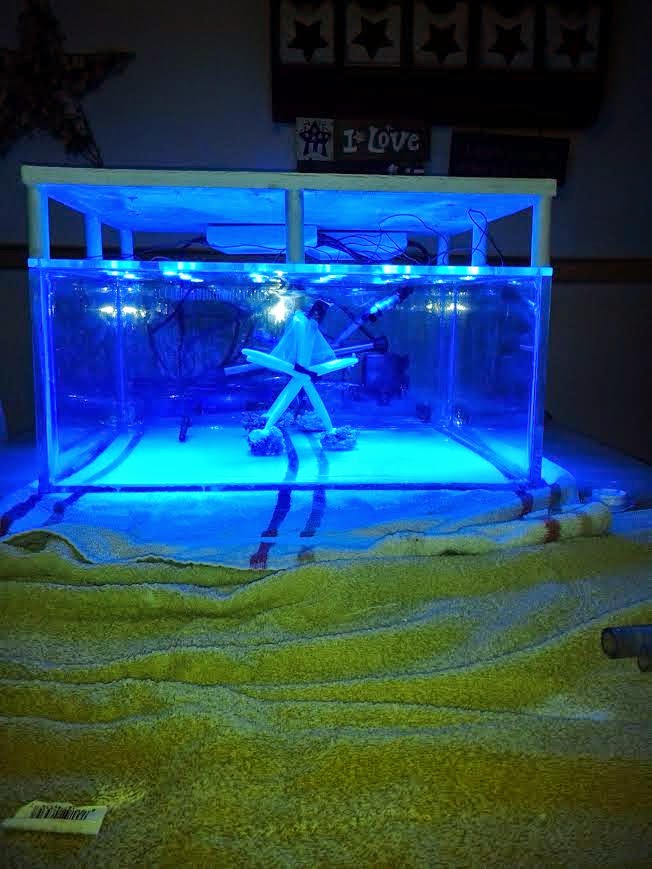 Chris painted it and I went with my maid of honor (god bless this woman!) to JoAnn Fabrics and bought some white fabric and tacks and made the thing look like the bottom of a cake platter in one night. It actually came out really nice and allowed the lighting to keep from getting too hot which was perfect. 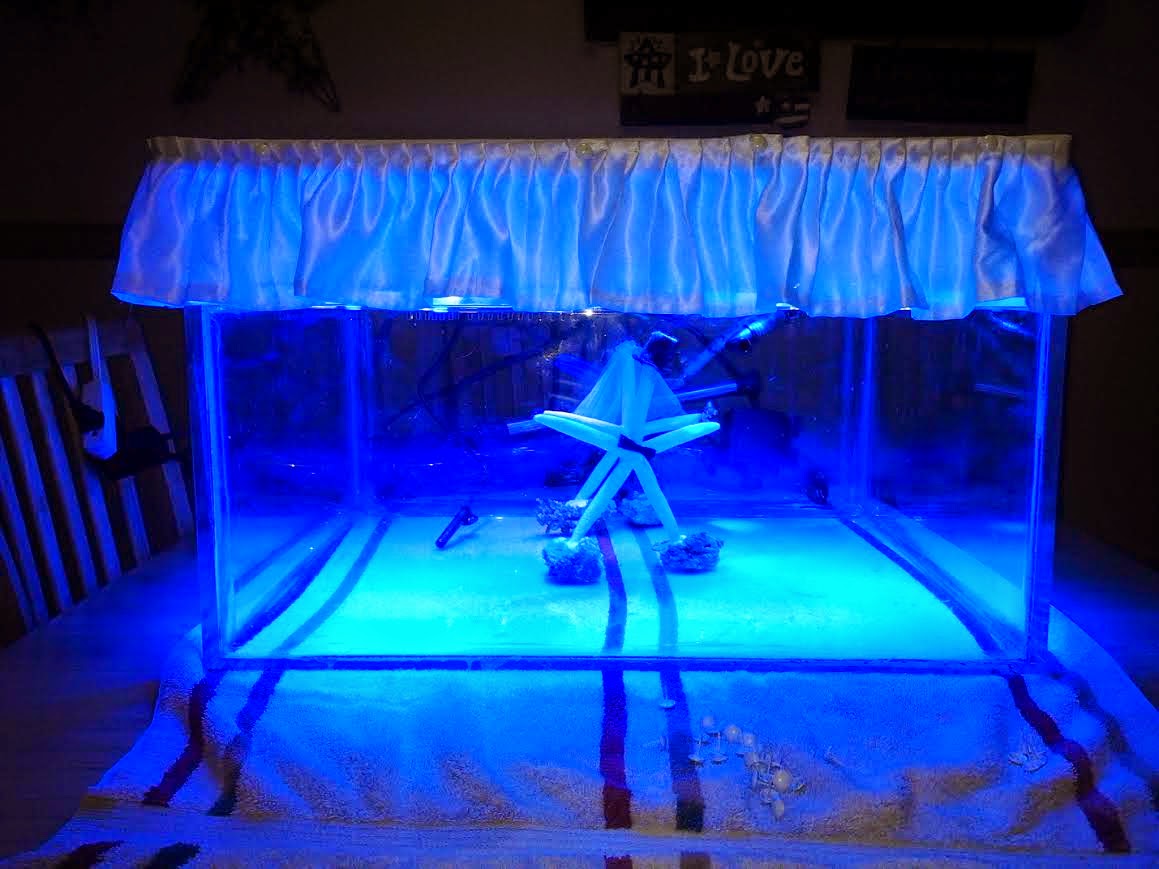 Now in the meantime, we had set everything up with a local fish store in Connecticut to provide us with the coral for the day of the wedding only. The store in Stratford had worked with us for quite a few months in what coral would go in the tank, who would be bringing the coral, so on and so forth. I had personally delivered their invitation to the wedding and the one owner had been ecstatic about the whole thing. We talked for nearly an hour about the different LPS that would go into the tank, I was more into flowing things because most people don't like colorful sticks like Chris when they aren't into reefkeeping. They want bright colorful things and things that move.

Then I get their rsvp back in the mail and it states that they regretfully decline less than three weeks before the wedding....

So, I ask Chris to call one of the workers we know to ask him if he is aware of the situation and if they are still going to provide the coral for the tank. The response is pretty grim. Not only are they not going to provide the coral but they have known that they weren't for a few weeks! One of them felt that we were taking advantage of them even though we had offered to pay for anything that may perish during the day and/or rental of the coral.

Okay, bridal breakdown! Are you kidding me?!

Chris tells me to calm down, we know plenty of store owners. He tells me to call Ryan and Bob over at Bob's Exotic Fish and Coral in Milford, Connecticut first. We've known Ryan for a long time since he worked over at Puppy Center and Bob is a great guy too. I take a moment to gather myself and call over to the store.

Ryan answers and without sounding like the crazy woman I most certainly am at the moment I explain the situation and ask my huge favor of the store. Ryan explains that Bob is out of the store at the moment but, he thinks that he won't have a problem with it. He'll send him a message and when he hears back he'll let me know. I'm breathing a little better at this point but, until I know for sure, I'm terrified.

Chris and a few of the reefers that now know the the situation are coming up with a list of what everyone can pull from their tanks to make this work...

A little while later my phone rings. It's Bob on the other end and this man is totally overwhelmed that we asked him for this favor...and I'm finally breathing again! Bob was even ready to build us a tank at the last minute if we needed it!

He didn't want any compensation for the coral. As a matter of fact, he wanted to GIVE us what he put in the tank. However, we declined he incredibly generous offer. He was very excited and picked everything out himself and made the rock with the mushrooms and polyps that were showcased in the tank. The clowns were black and white clowns, dressed to match the groom! We placed the whole thing on a metal serving cart guaranteed not to move or buckle under the weight of the water (or the enormous cake).

Kris, another club member, picked everything up from Exotic and showed up early to start setting up the tank. Ryan was able to show up for a little while to help and get a few pictures. Unfortunately, Bob was unable to attend even for a photo op which disappointed both Chris and I but, he had a shop to run for the day! Kris also took everything down at the end of the night and returned everything back to Exotic the following day. 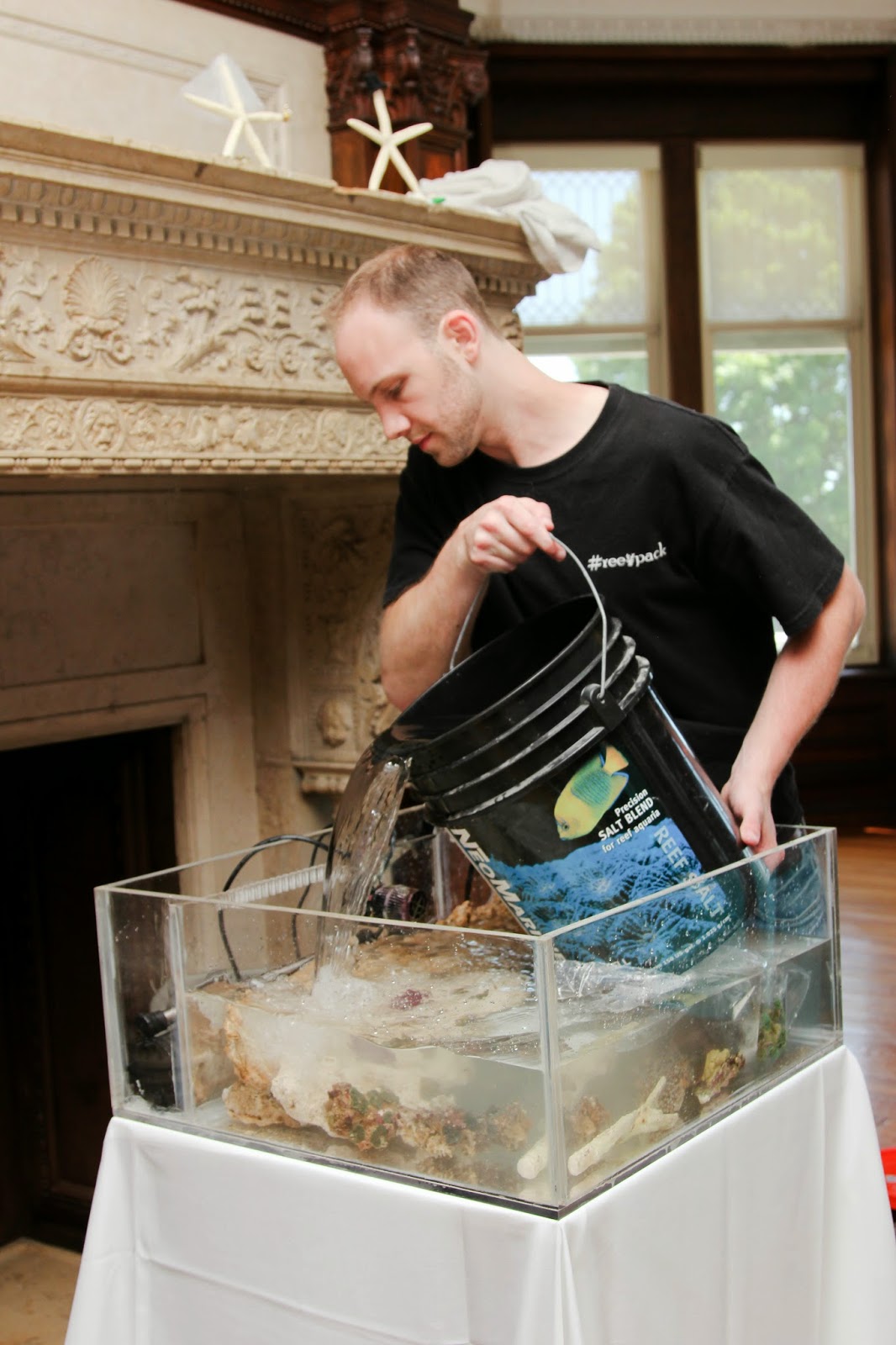 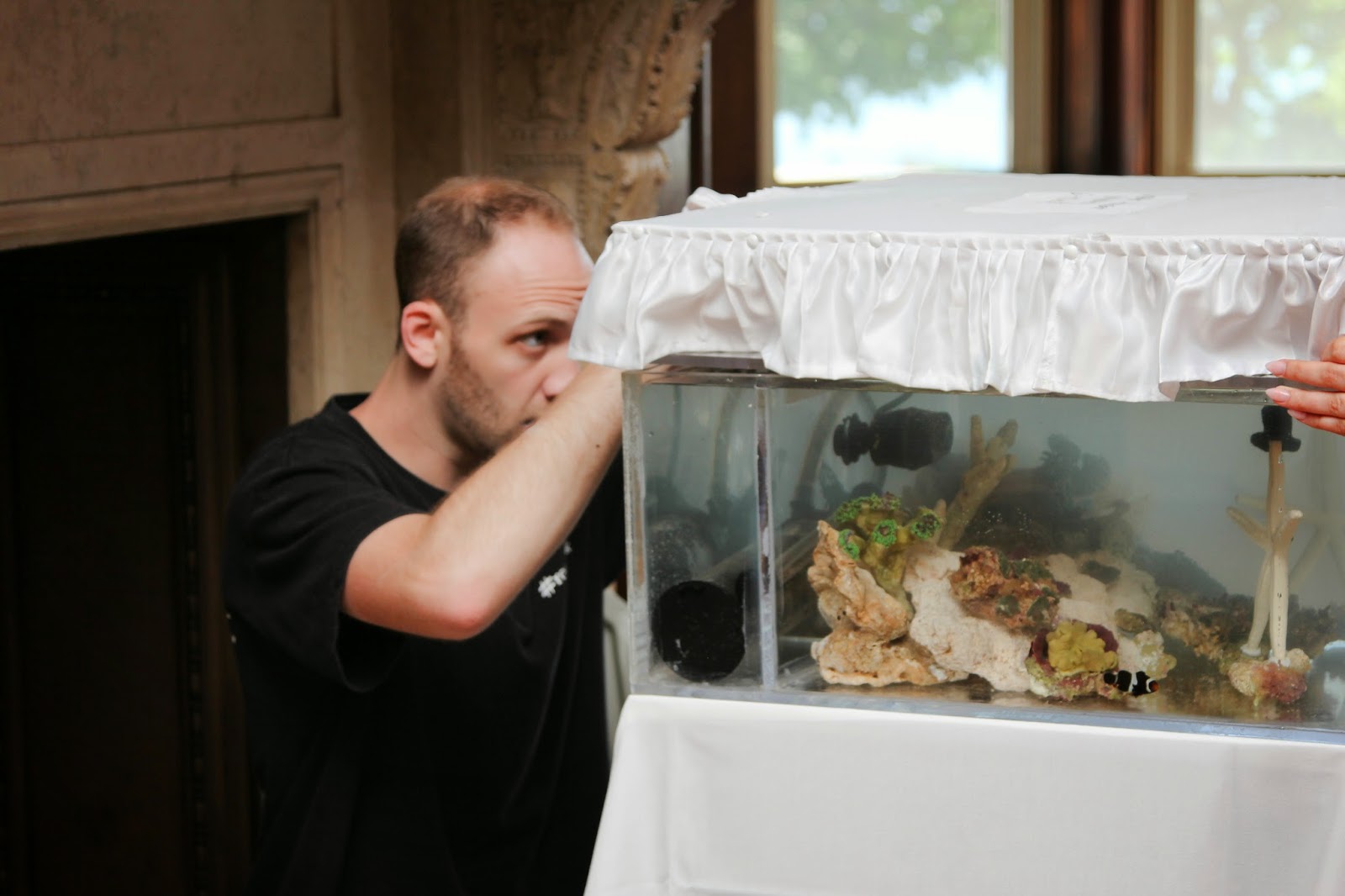 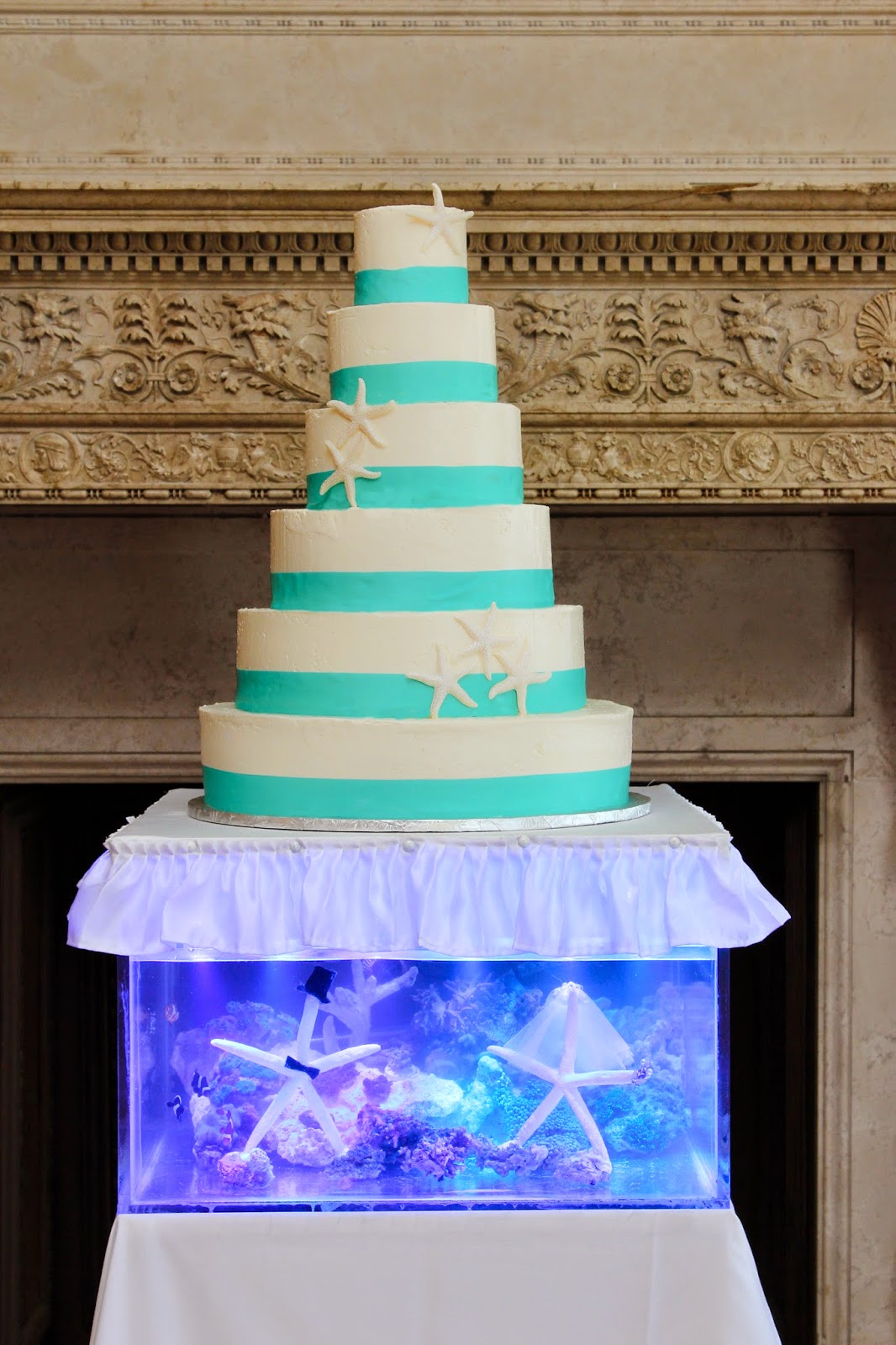 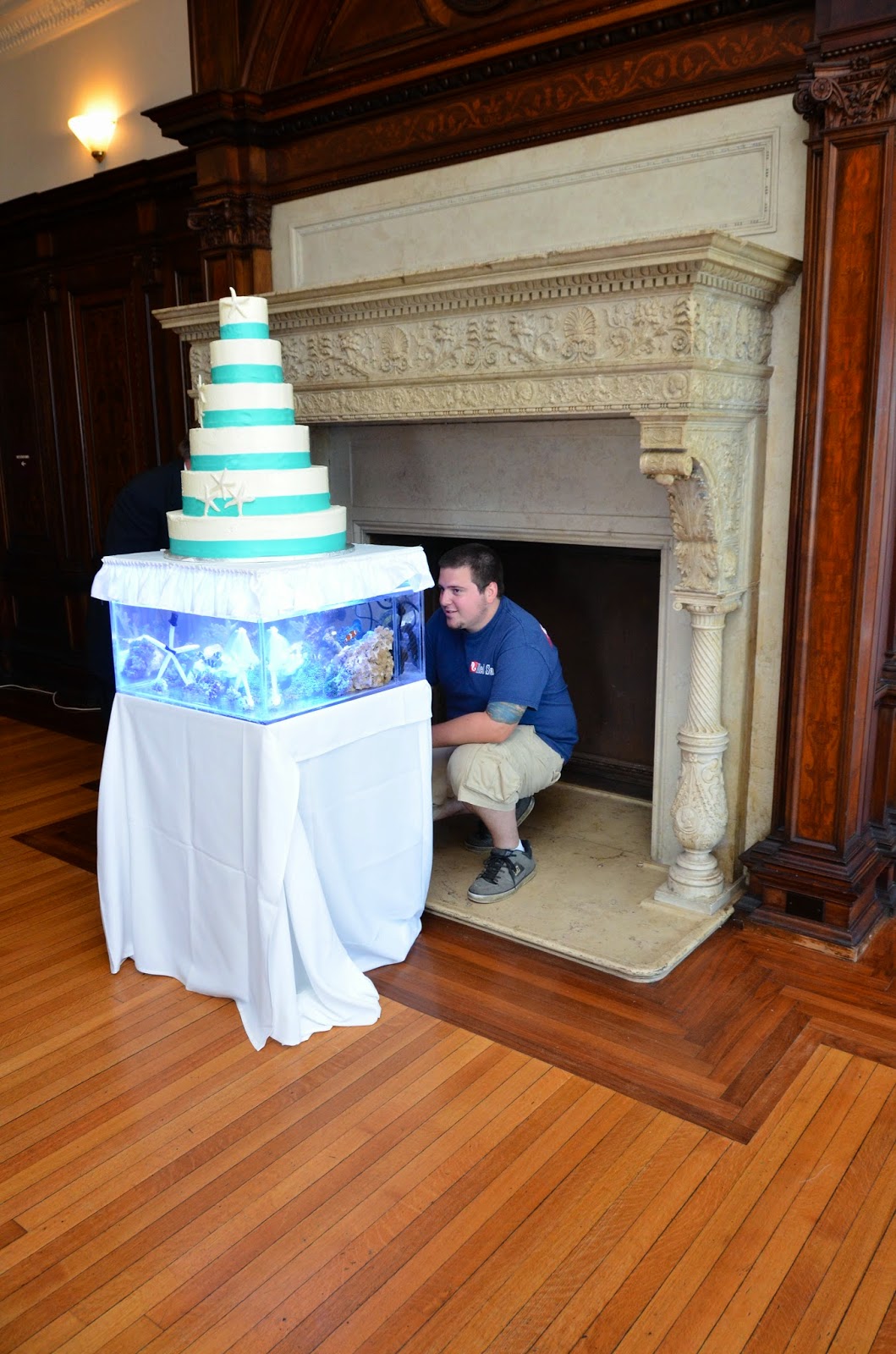 This was certainly a team effort. If I were to ever do something like this again there are a few things I would do differently:

1. Not have so many people working on the building of the tank...one piece was here, one was there it was insane! Or maybe not all at the same time...
2. Have it done weeks before the due date! It got done too close to the wedding date which for me was waaaayyyy too close for mistakes to happen!
3. Don't work with crazy local fish store owners. The minute you notice these people acting nutty, find a different more established store to work with.
5. Remind the photographers to take photo's after all the polyps have come out because they have no clue! All of our photo's were taken right after the tank was put up...

So here goes...
A HUGE thanks to Kris for picking everything up, setting up and breaking down the entire display. You were amazing! Ryan, thanks first and formost for listening to my panicked phone call and then for relaying the message to Bob! Bob at Exotic Fish & Corals in Milford, Connecticut for stepping up after the other store bailed out on us just before the wedding. You were an absolute lifesaver and Chris and I could never express our gratitude for your generosity towards our special day! Thank you, thank you, thank you!!! Thanks to Amber for the giant cake and for having to put up with my groomzilla when it came to having to build it to his specifications lol! Thanks to Jas for the lighting help. Thanks to Emery for building the tank and for getting us the cart. Without everyone's help, this project would have never happened the way it did! 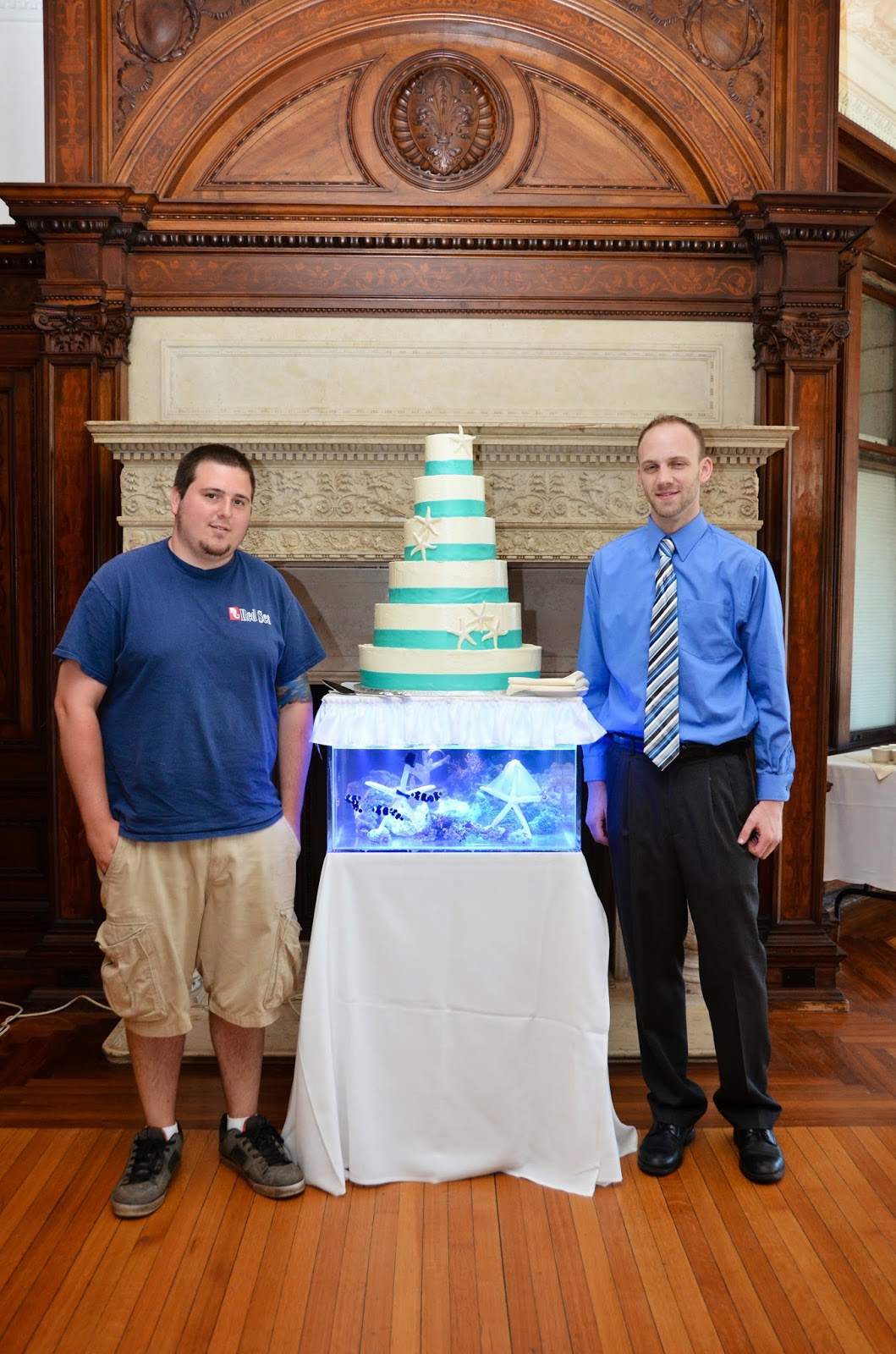 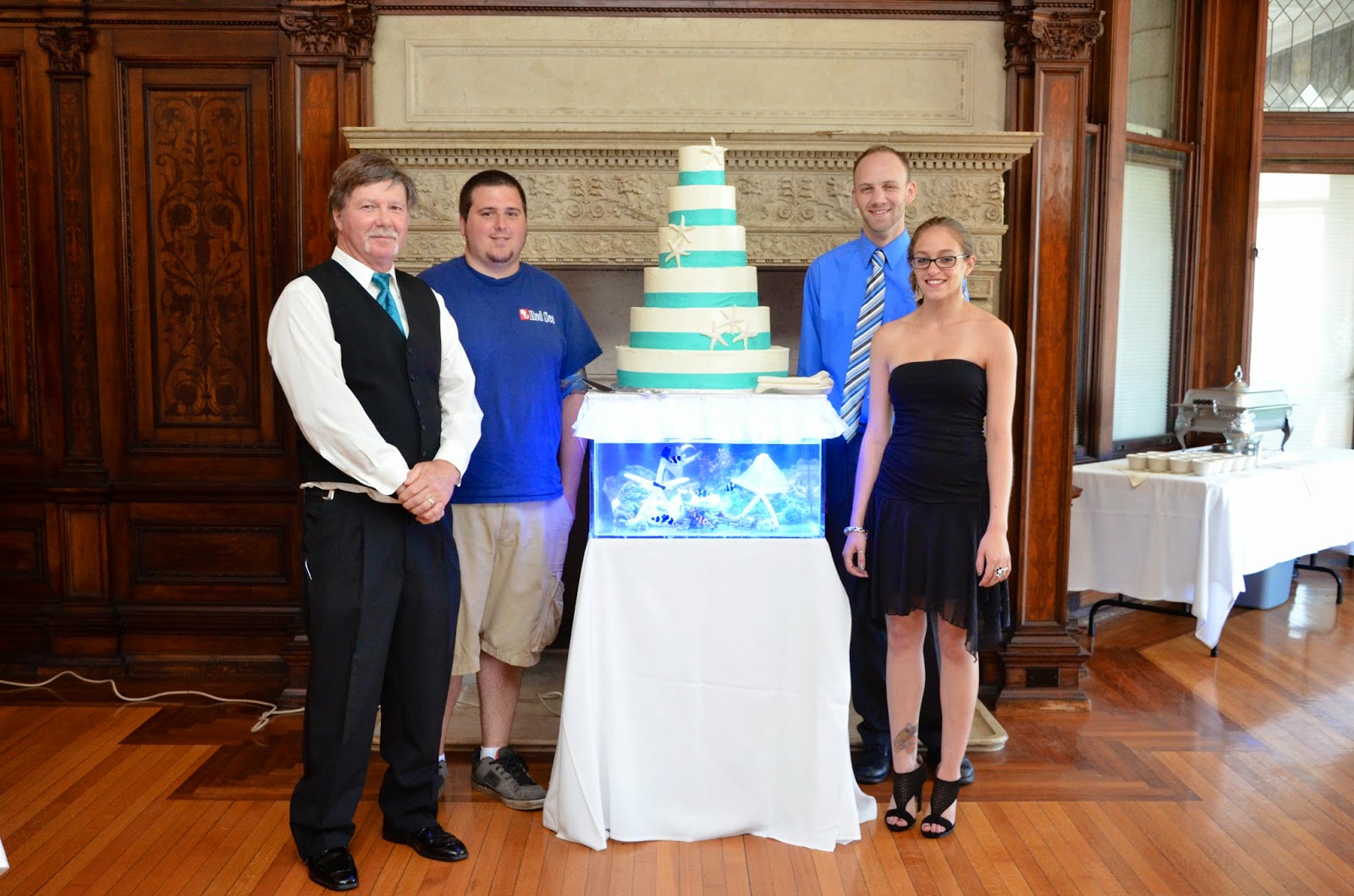 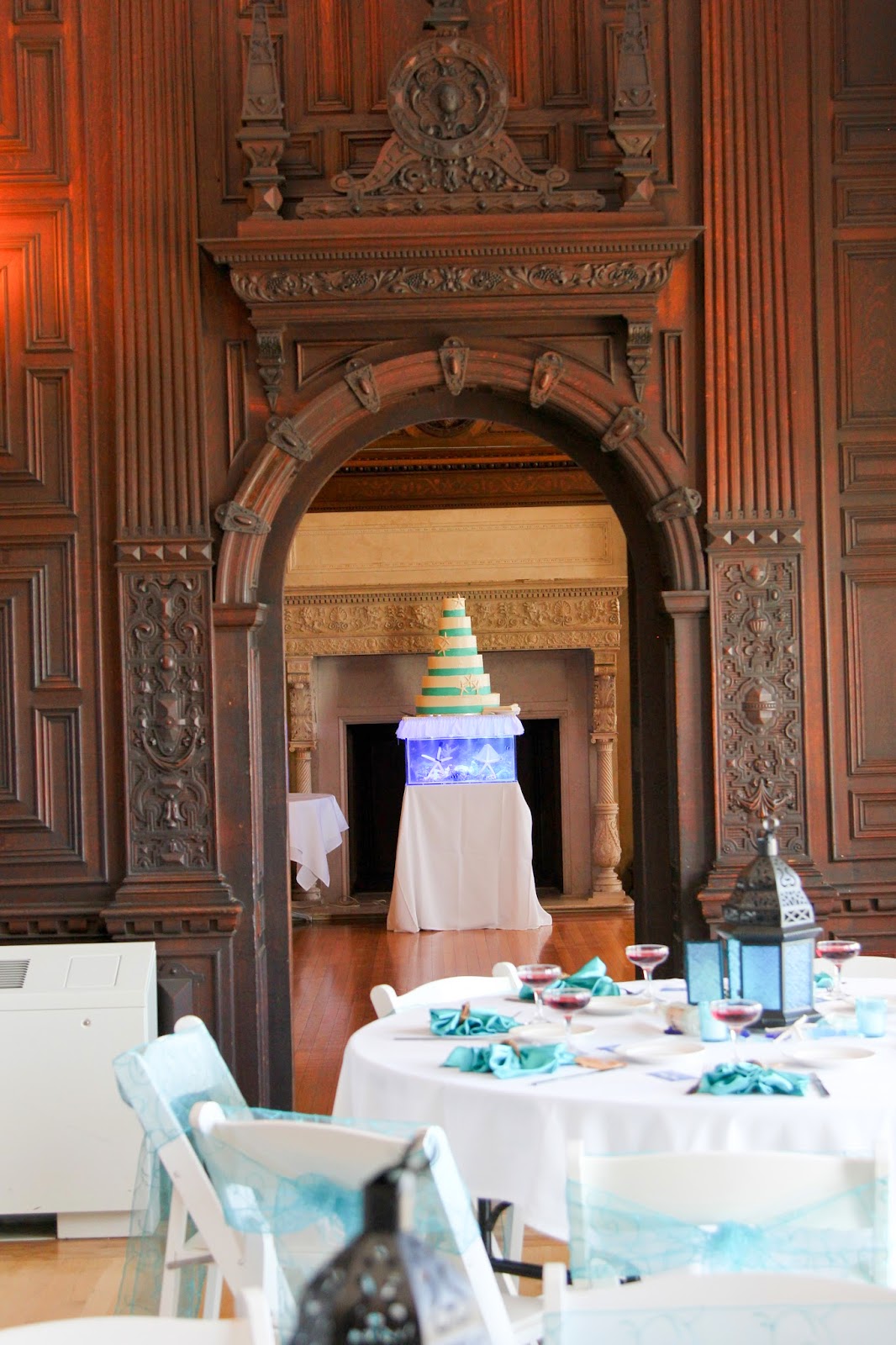 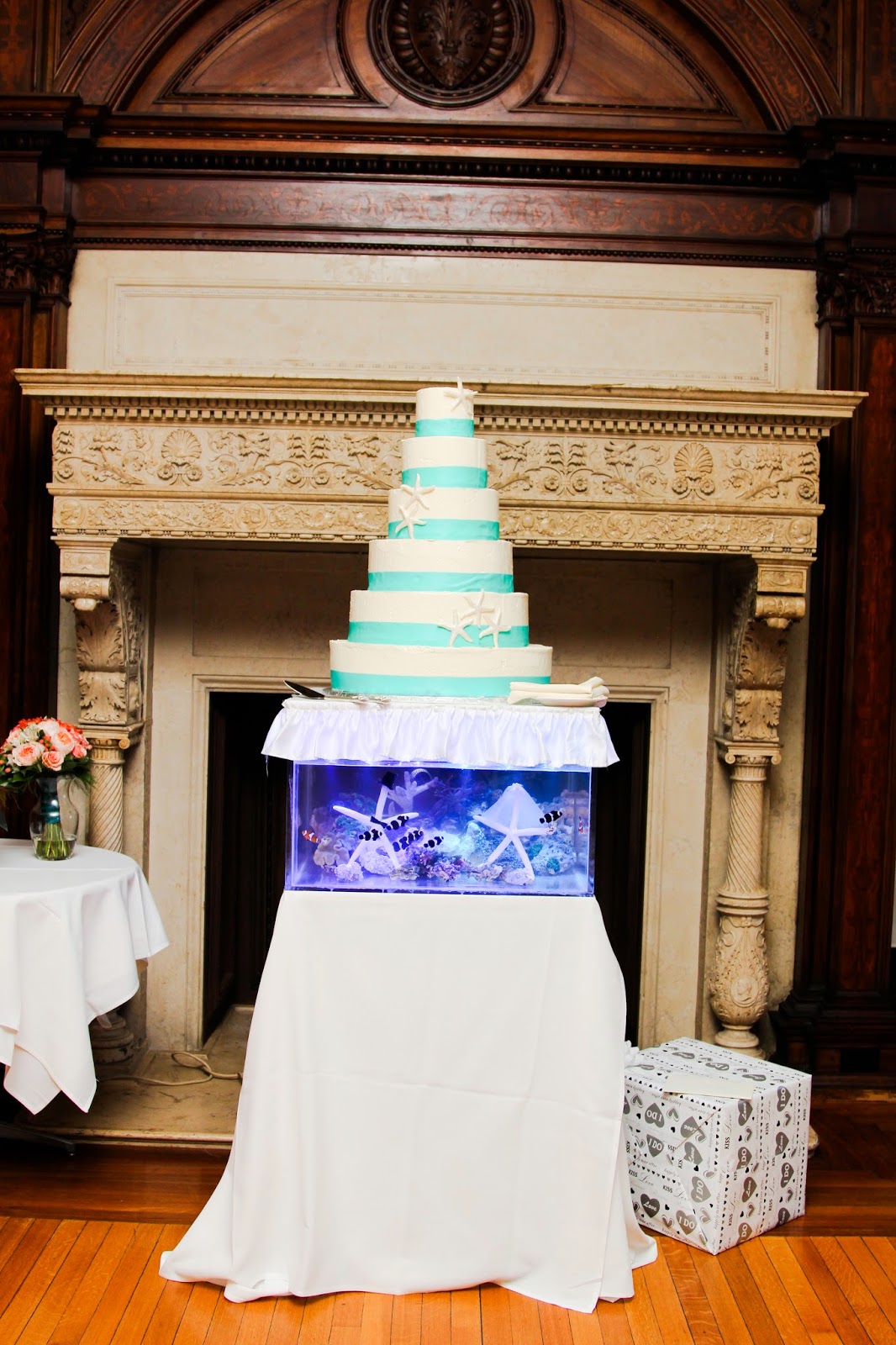 In the end, friends are your best resource for everything and you never know when the best ones will be there when everything seems to be looking the worst. Thanks to all of you for being there for us! Someday I hope to be there for you as you were for us! 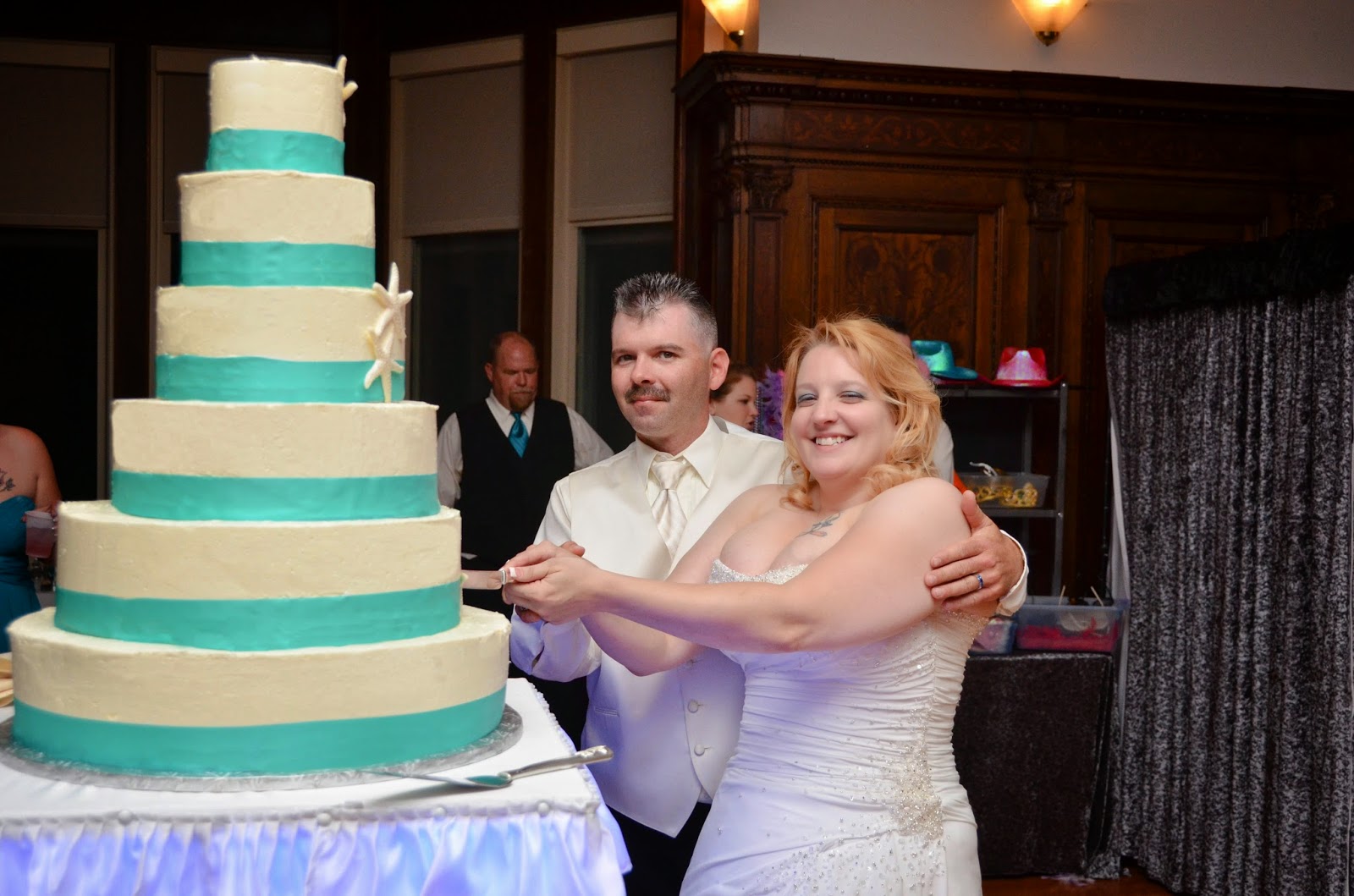 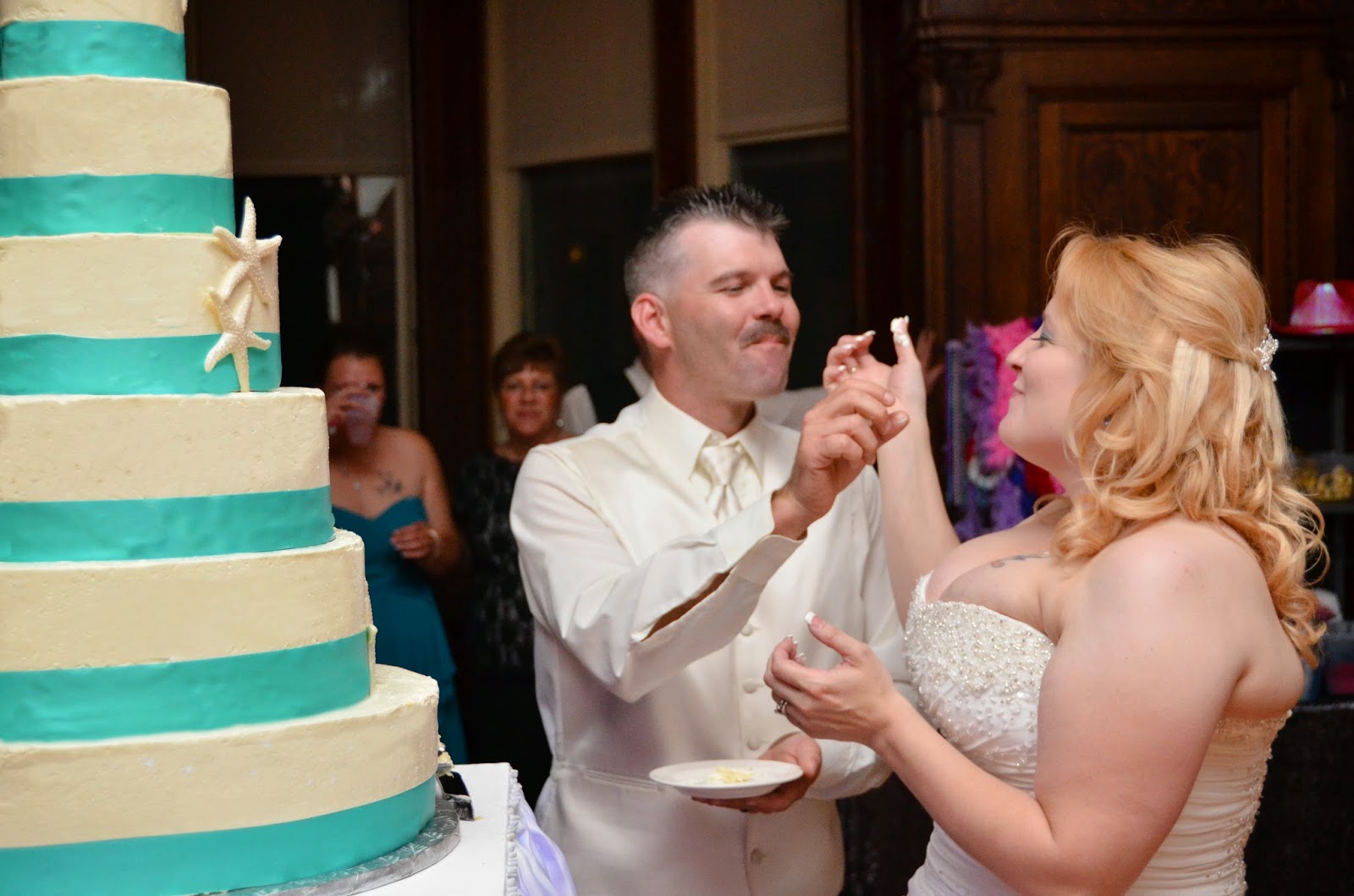 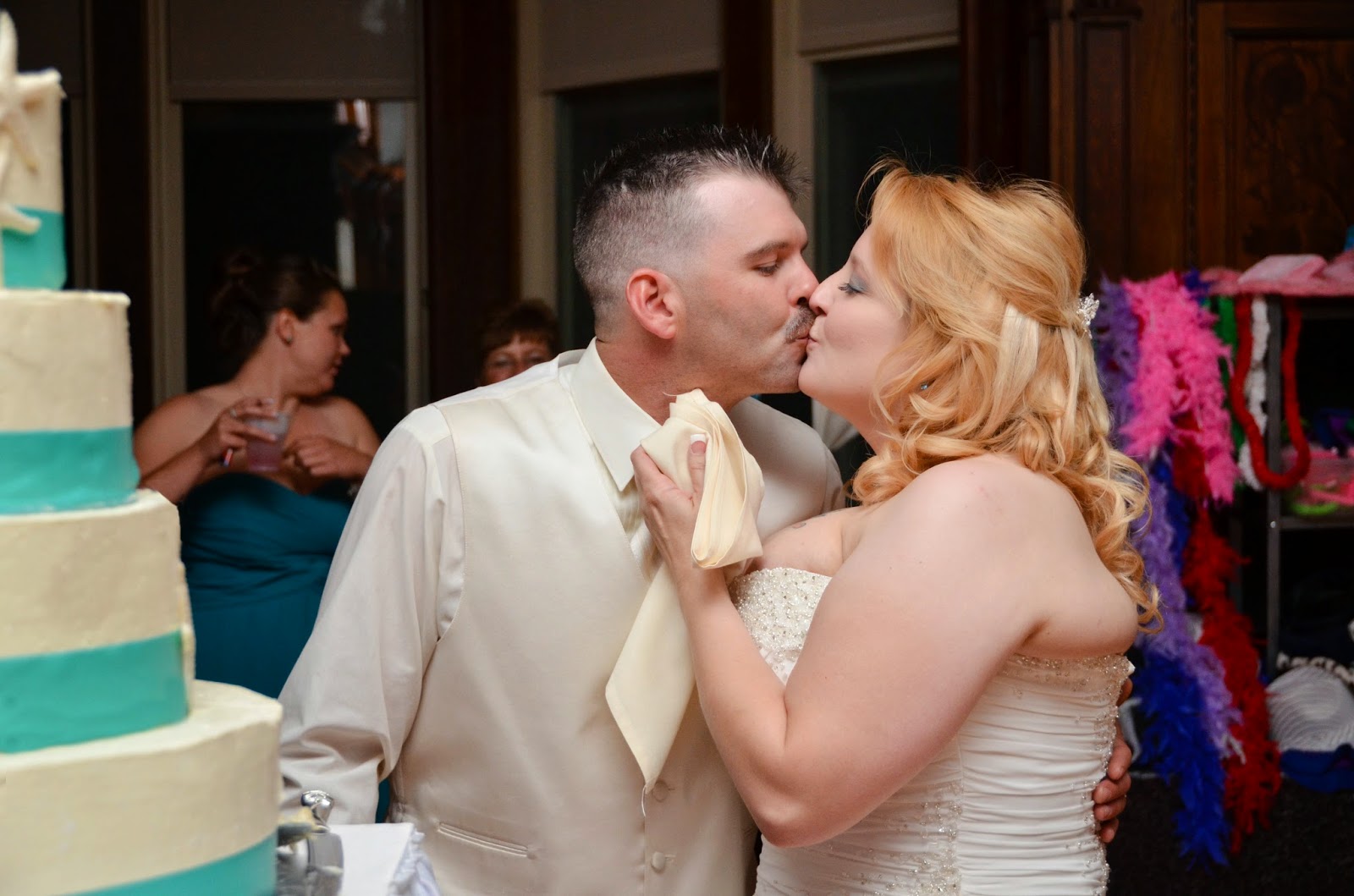 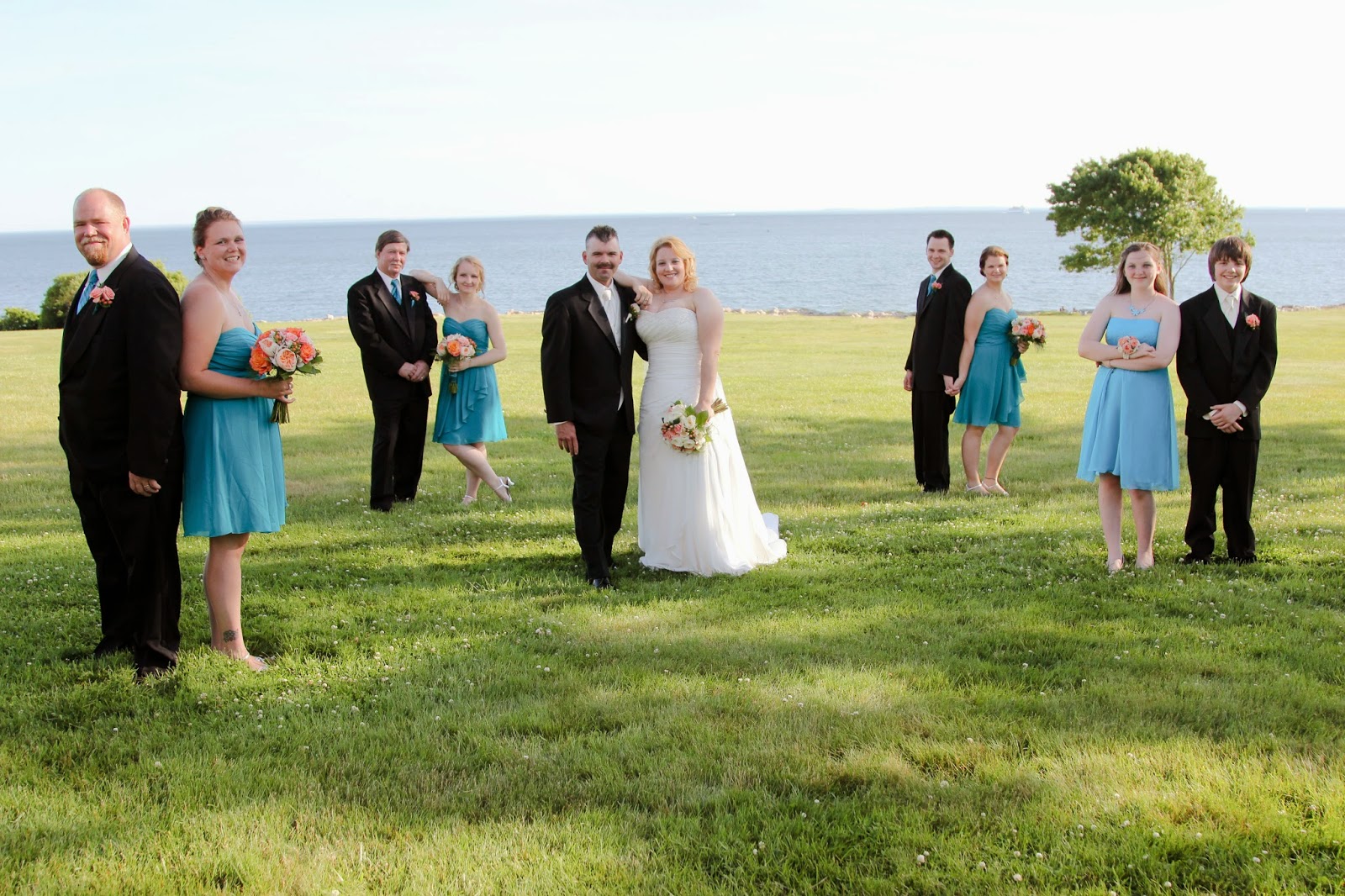 (In case you were wondering...only the bottom tier of our cake was real, the rest was fake!)

To see additional pictures check out my blog Saltwater Dreams.
Last edited by a moderator: Sep 10, 2014

Thank you for sharing! And CONGRATS!

Aw! What a wonderful cake and tank/cake stand! It all looks SO beautiful. Congrats!!

That's a really creative cake stand. Really like the mansion in the background from the first picture. :smile: Congrats to both of you as well.

Haha. Love it and congrats!

Great idea and excellent job on the build!

That's got to be the most AWESOME cake EVER!!!

Wow! Happy endings are the best!

I love it. Congrats
X

AWESOME....... wants me do my whole wedding all over again, this time with a reef cake.

Congrats you two!
You must log in or register to reply here.

M
To Use or Not to Use? Caked-Up Salt Mix

QUESTION OF THE DAY TOP 3 Ingredients for an amazing Reef Cake...tank! What's yours?
2 3