Researchers discover a probiotic that protects corals from disease

I recently posted about the ongoing disease outbreak (SCTLD) that threatens to wipe out many Caribbean reefs.

Today I've got another story from the microbial world, but this time instead of an apocalyptic plague story, it's more like a superhero origin story. We often talk about negative effects of microbes (pathogens) because disease and death are easily measured. Here is an example of a marine microbe with strong positive effects.

Some of the researchers involved in the study that identified bacteria associated with SCTLD have identified another marine bacteria that shows great promise for preventing and even treating this disease. There is a great article on the Smithsonian about this, that I think does a great job of presenting many of the scientific details in an accessible way. I'll share an excerpt here but encourage the interested reader to check out the article itself for more details.

Dr. Blake Ushijima is doing pioneering work in this area, and the article gives you a first hand view of his results. Dr Ushijima and colleagues isolated a bacterium from coral colonies that killed other bacteria. So they moved on to test its effects on corals, and discovered strong evidence of a probiotic effect. Specifically, it appears to protect corals from SCTLD, and even halt the progression of the disease in infected corals.


the article said:
Testing the potential probiotic directly on samples of diseased M. cavernosa in the lab, Ushijima observed that adding the bacterium to diseased corals in aquaria was able to slow or completely halt the advance of disease.
Click to expand...

I find the results pretty compelling - here is the key figure from the article: 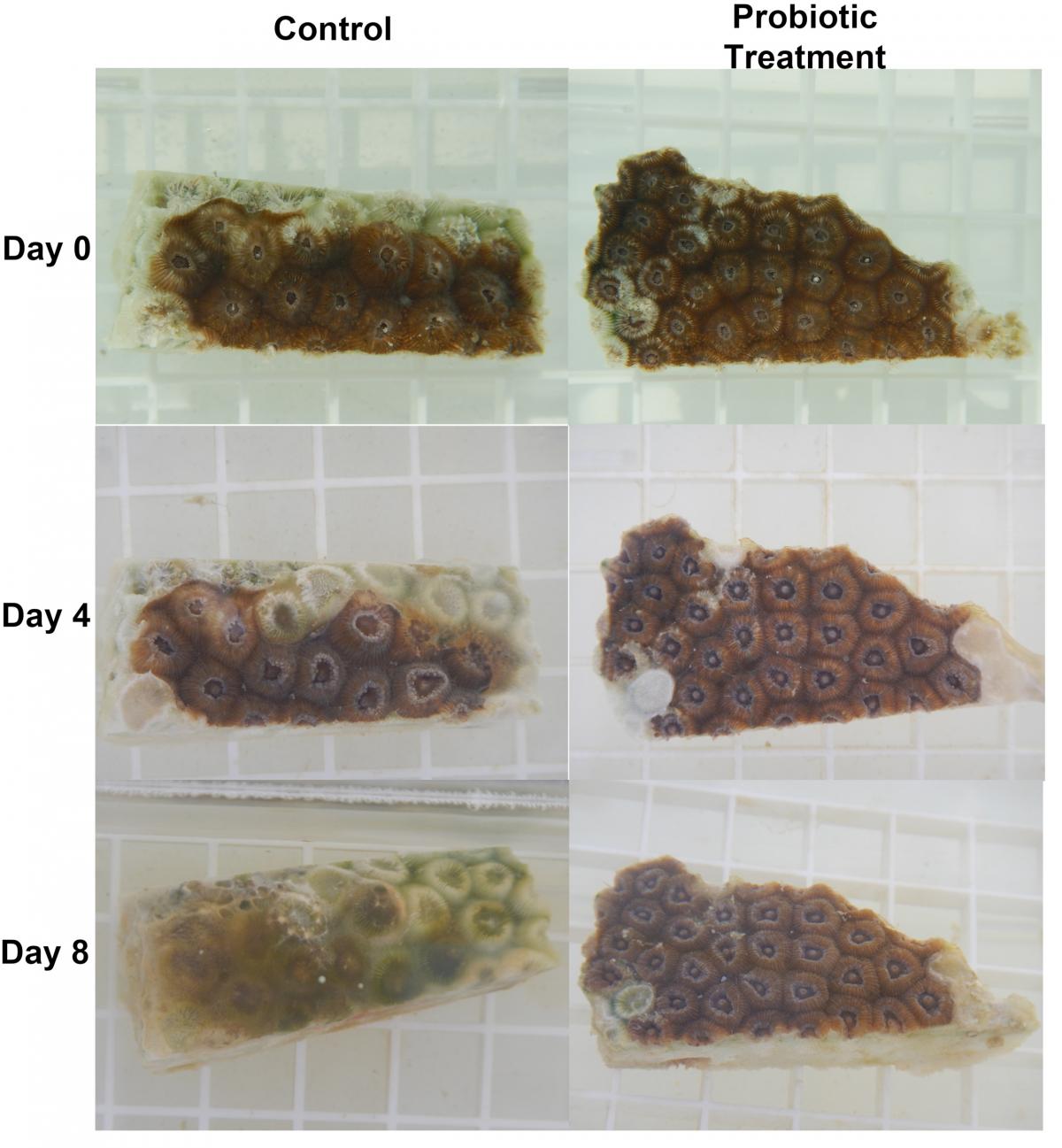 Compared with no treatment, samples of M. cavernosa treated with an experimental probiotic developed at SMS showed much greater resistance against disease. (Photo: Blake Ushijima)
Click to expand...

One of the coolest findings is that the probiotic benefits appear to be contagious.

the article said:
And when diseased corals are put in close proximity to healthy corals treated with the probiotic, the beneficial effects seem to “jump” to the diseased fragment, slowing or stopping disease progression there as well. The probiotic-treated healthy fragments also appear to be more disease-resistant, which could greatly benefit broader attempts to re-plant corals in areas where the disease has already ravaged Florida’s reefs.
Click to expand...

So what is this bug? The article doesn't name it, but I did a little digging. It looks like the results are not published yet but have been described at a scientific conference. Unless the team has identified multiple probiotics, it appears this work is based on Pseudoalteromonas tunicata. This bacterium was originally isolated from a tunicate, and has been studied extensively for its anti-fouling properties. Researchers have recently sequenced the genome, so this is a reasonably well studied species.

I think you know where I'm going next. I wonder if this thing occurs in reef tanks. So I checked the database ...

P. tunicata itself, the probiotic species? This occurred in exactly one tank. Only one tank, but its a convincing signal with this one species making up 0.3% of the water microbiome.

So the bacteria associated with SCTLD occur in a small fraction of reef tanks... and now we see that a bacterium with a strong probiotic effect that can protect corals from this disease are also starting to show up in a small number of reef tanks. So far, a very small number! It will be interesting to see how these numbers change over time...

The top question in my mind: how can we most effectively add this bug to aquariums, for those who would like to experiment with it? With n=1 tank it's hard to draw any conclusions about where this came from... but I will be re-sampling that tank in depth to try to identify the source.

In the meantime, since we know it was isolated by these researchers from a Caribbean coral, and the tank in question has had a lot of Caribbean input, I'll be especially interested to watch for this in tanks with cultured Caribbean live rock or similar material...

Fascinating! I look forward to hearing more as you continue to dig!
OP

I wanted to add my thoughts about where the probiotic bacterium P. tunicata in this one tank came from.

This tank at one time housed Montastrea cavernosa, the same coral from which the researchers isolated P. tunicata. This coral is non-existent in the hobby so if that was the source, it would make sense that it only showed up in this one tank. Problem with that theory is that the bug never showed up in previous samples from this tank.

Another possibility is that this bug came in on the live sand and mud recently added to this tank. Problem with that theory is that it didnt show up in the other tank the same material was added to.

The only clear path forward is to swab various corals in the tank and see if I can find the one housing this bug. But it would be great to find it in another tank so we could start looking for what the tanks have in common that may have served to introduce this bug.

If there was only one bacterium I could deliberately introduce to my tank, this would be it...

J
Corals from Tank that had fish disease..Velvet/Ich/Flukes

An example of our hobby affecting scientific coral research

S
What are these things on this coral ?