This build started off as an emergency response to a leak in my 32 gallon biocube a year and a half ago. There was a small crack in the back of my biocube that had progrfessed to the point where there was a severe leak and epoxy was no longer holding it back. So, I ran to petco and grabbed a 40g breeder and since they had the dollar gallon sale it was 50% off and I was bring this tank home within a half hour of realizing there was a leak for a mere $50. This tank is dedicated to my son Ryker. We live in NYC and I thought it would be funny to call the tank Ryker's island. When I first started the tank my wife was only a few weeks pregnant, but now he is almost 8 months old and loves to look at my corals and fish. 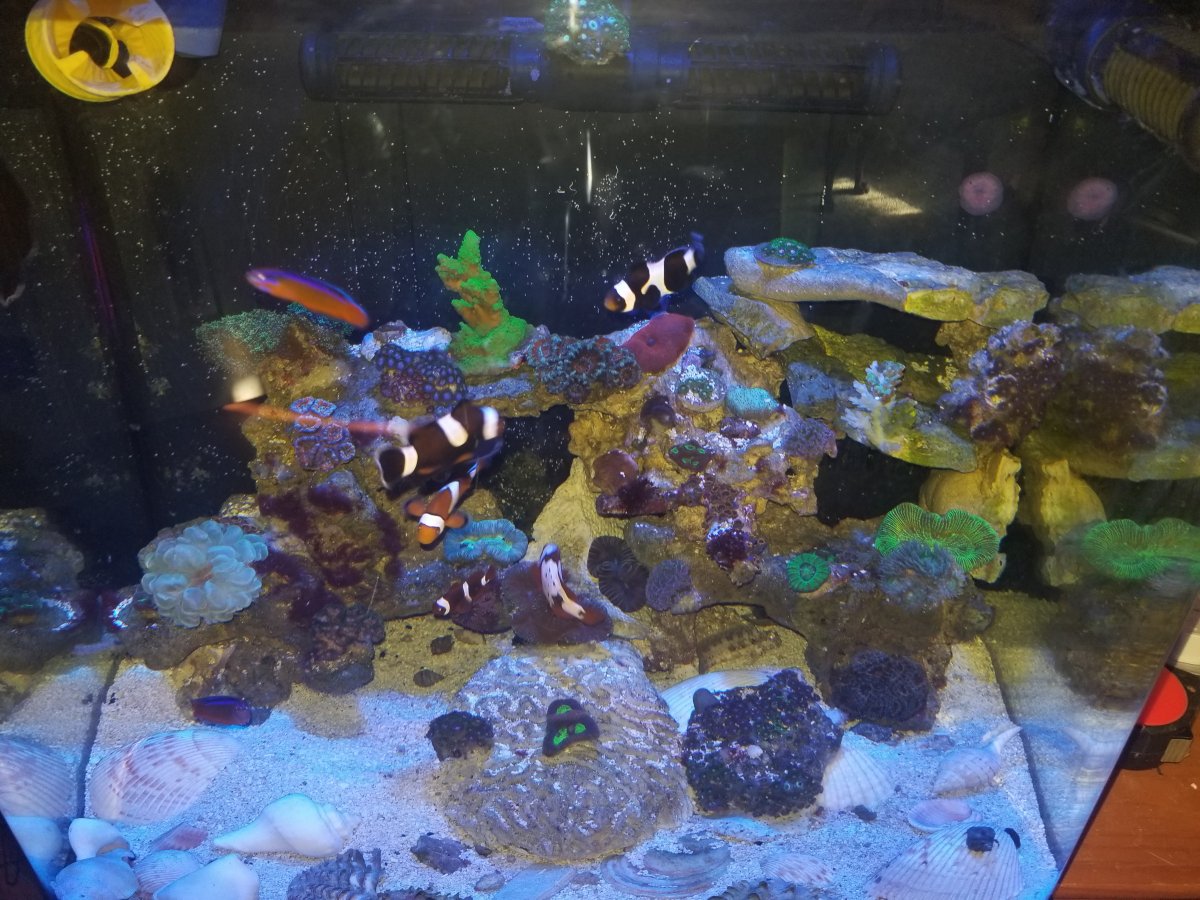 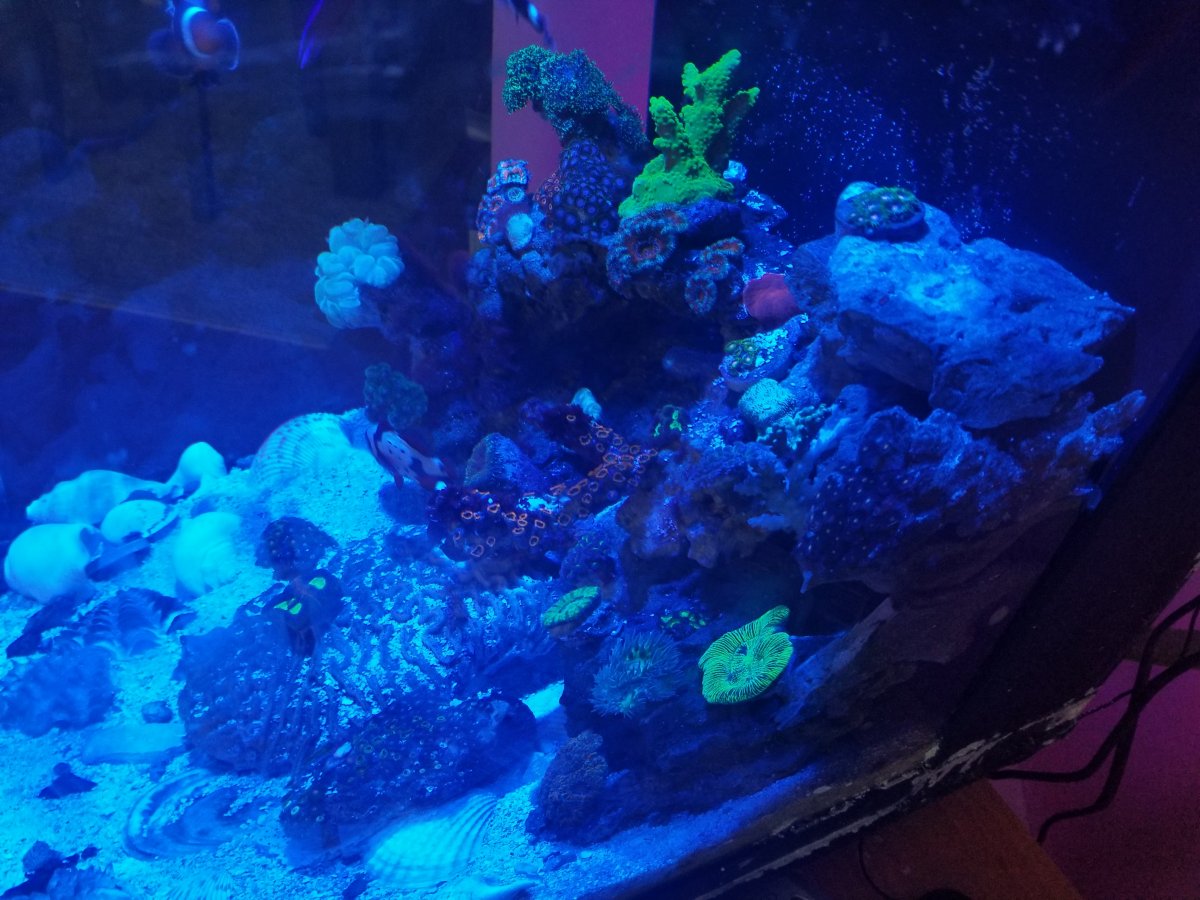 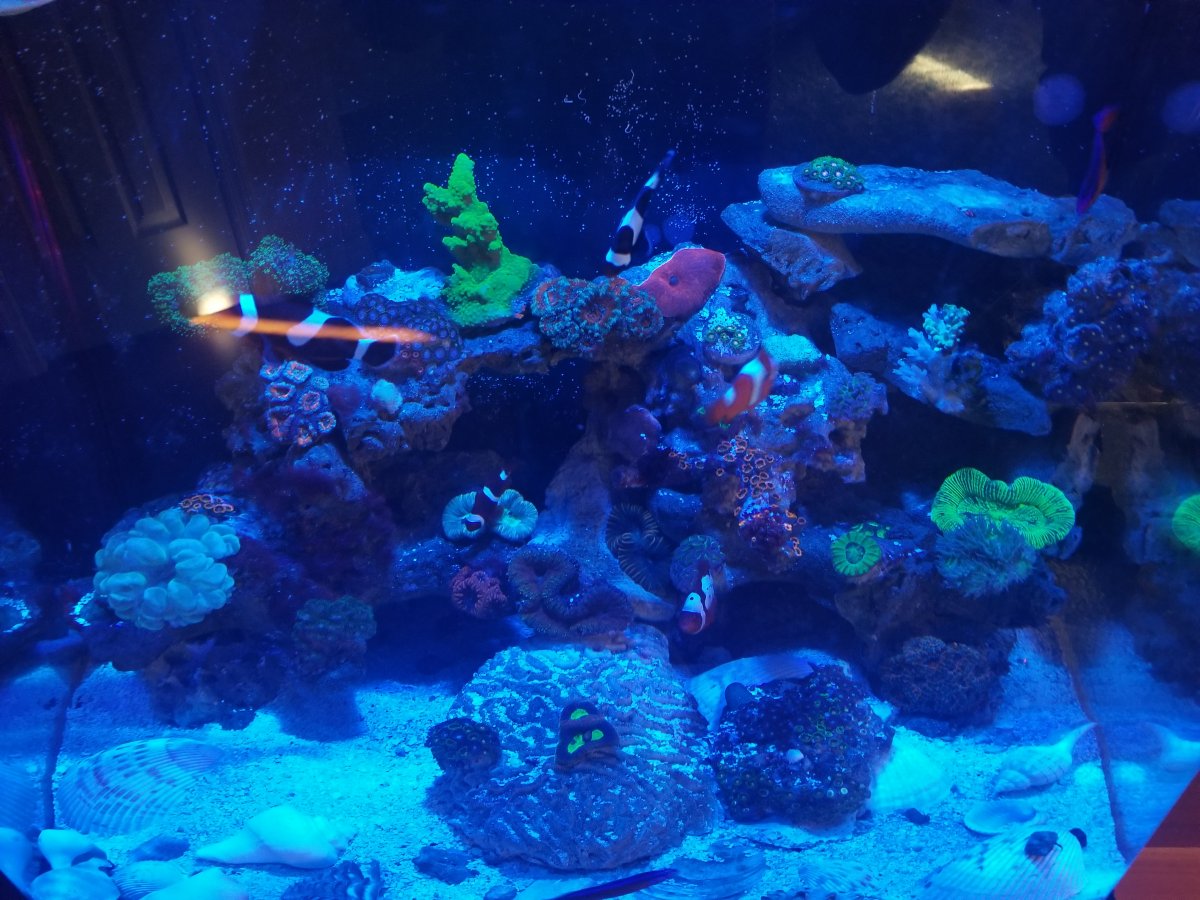 A little pic of the 40 g when the water was clear after the transfer. I had the tank on a desk, no sump, had a HOB skimmer and canister filter. No overflow or return drilled yet. I 3d printed the flow adductor return nozzle. 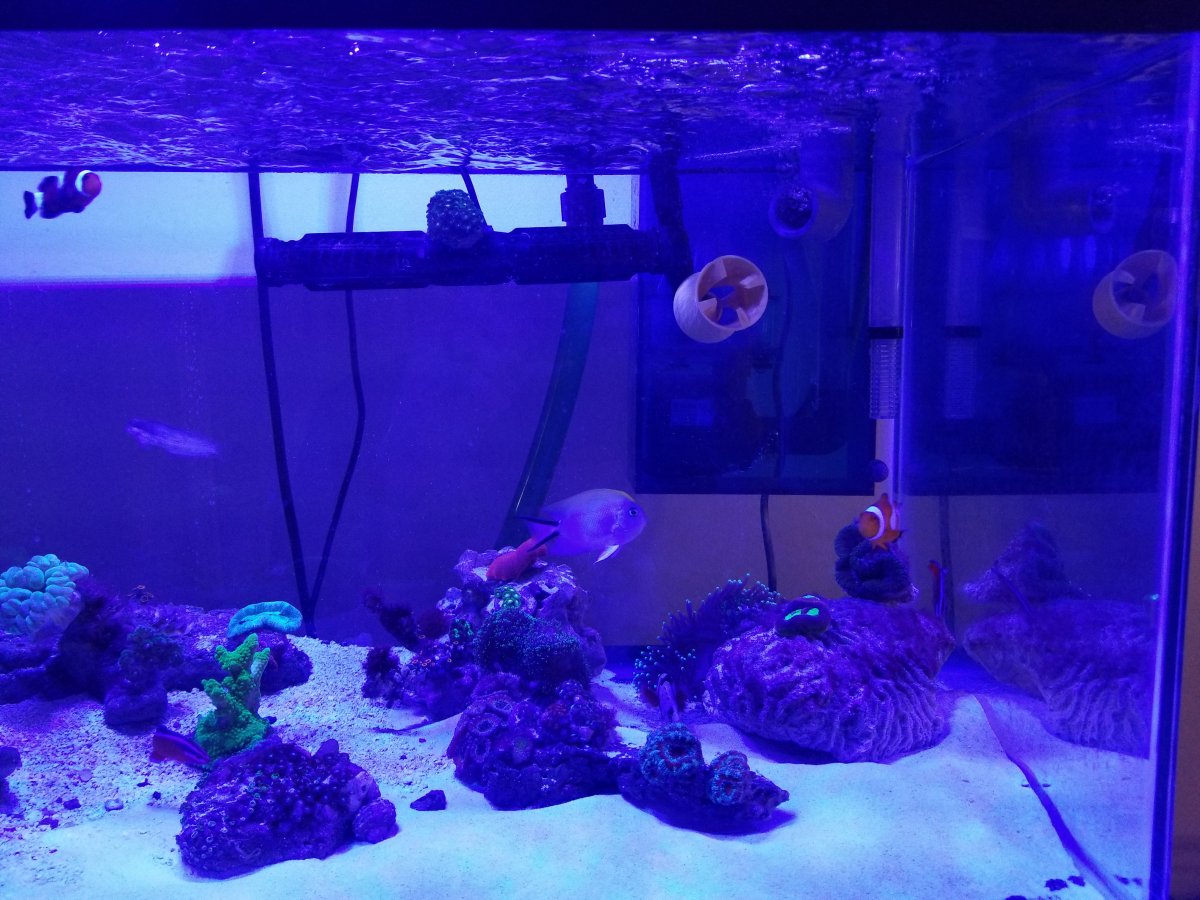 I needed to move the tank into the living room, so I built a stand our of a coffee table and some spare wood we had leftover from building a shed. I think it came out pretty decent. Its difficult to see but I had drilled the tank at this point and setup a sump. The tank was drilled while mostly full without any issues. 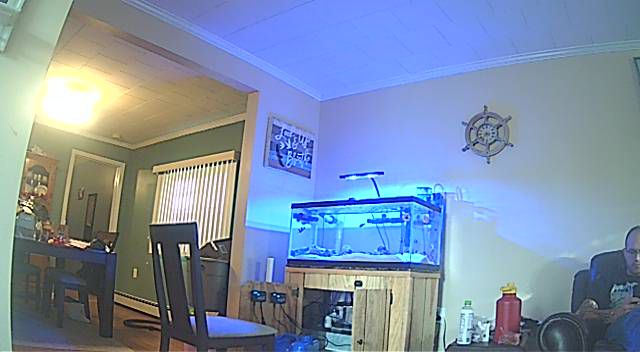 At this point I had realized that the nanobox duo was not even coming close to cutting it for lighting and that most of my corals were completely faded. I also realized that the HOB skimmer wasn't going to work for this application. So I added a few cree royal blues to my light and installed an in sump skimmer. In order to add the crees I build a floating canopy to house the lighting. 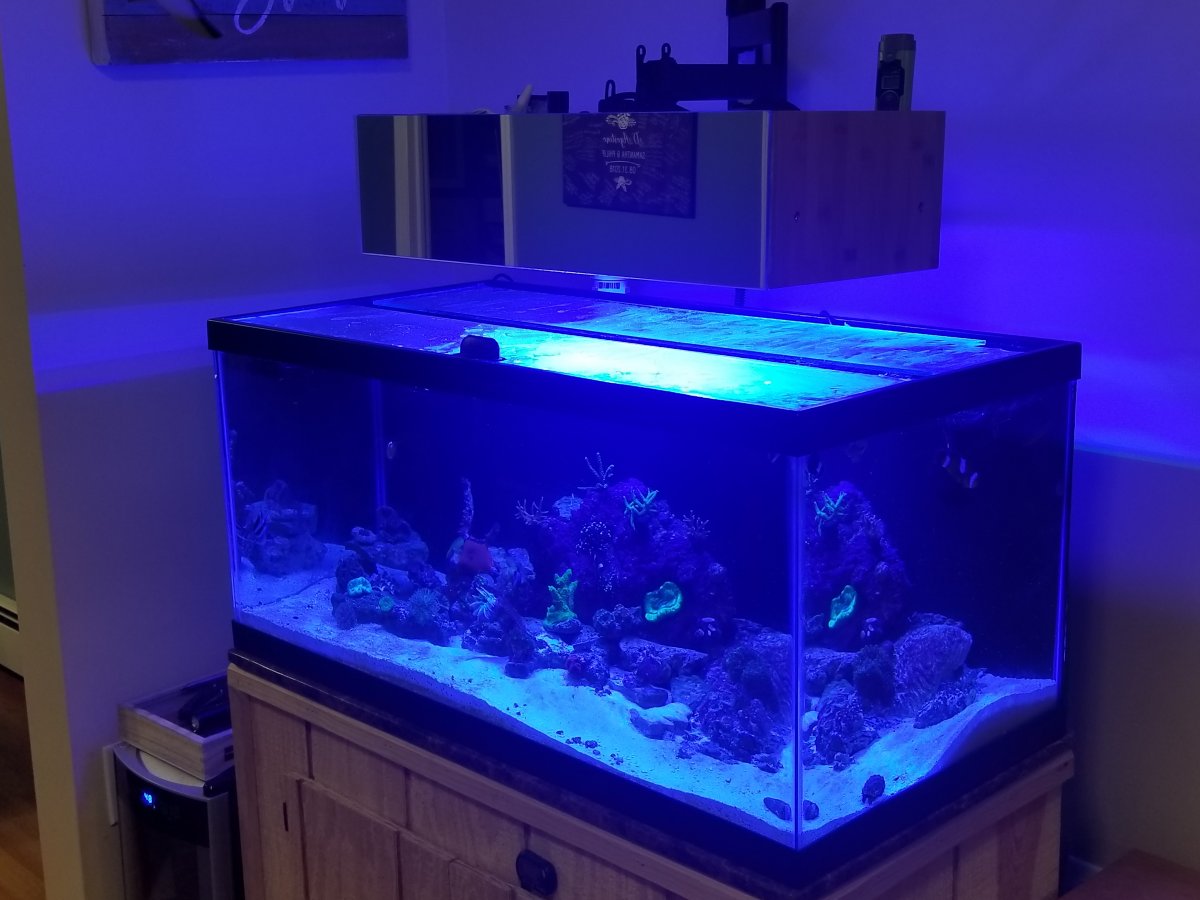 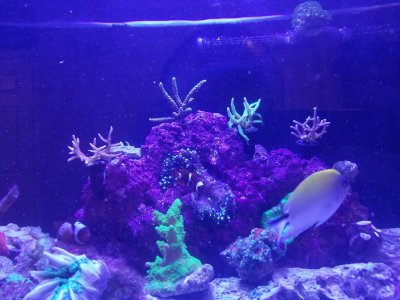 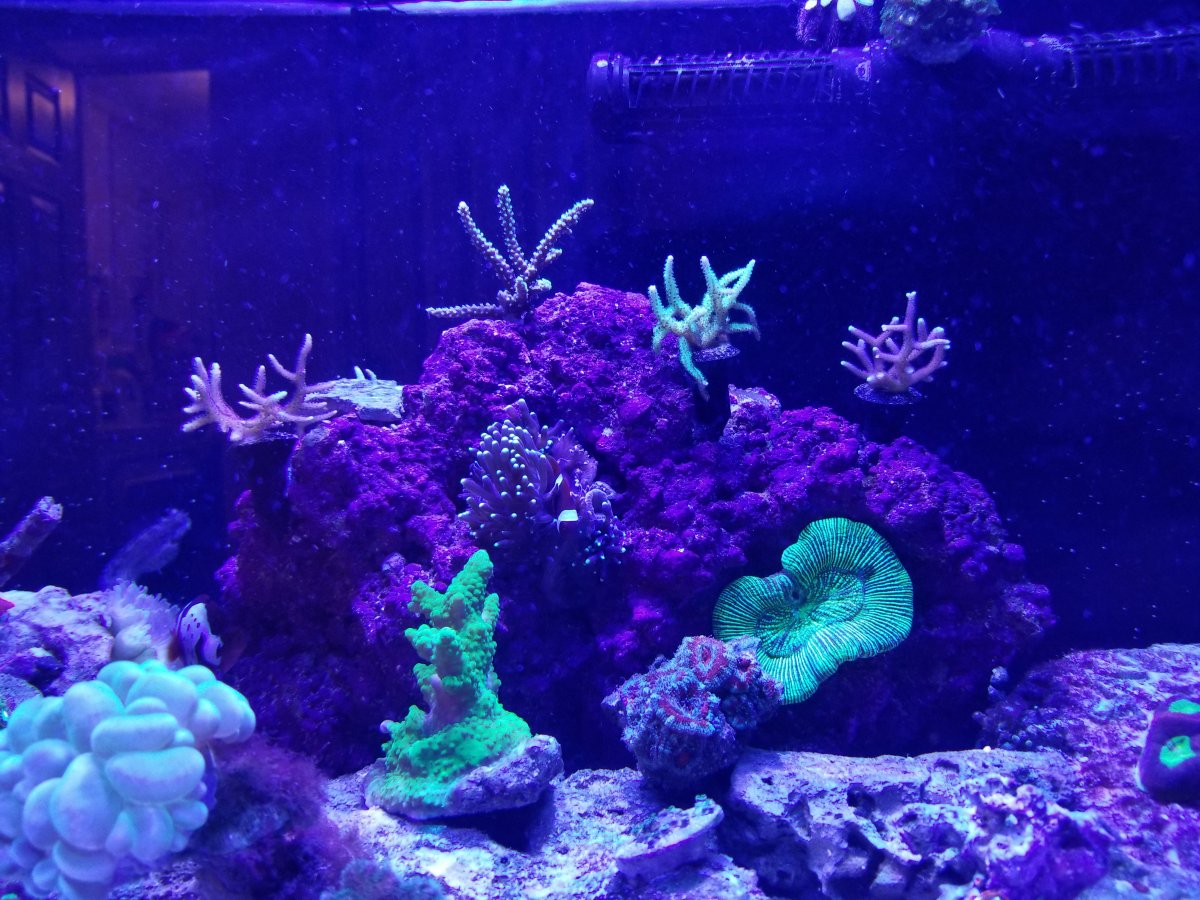 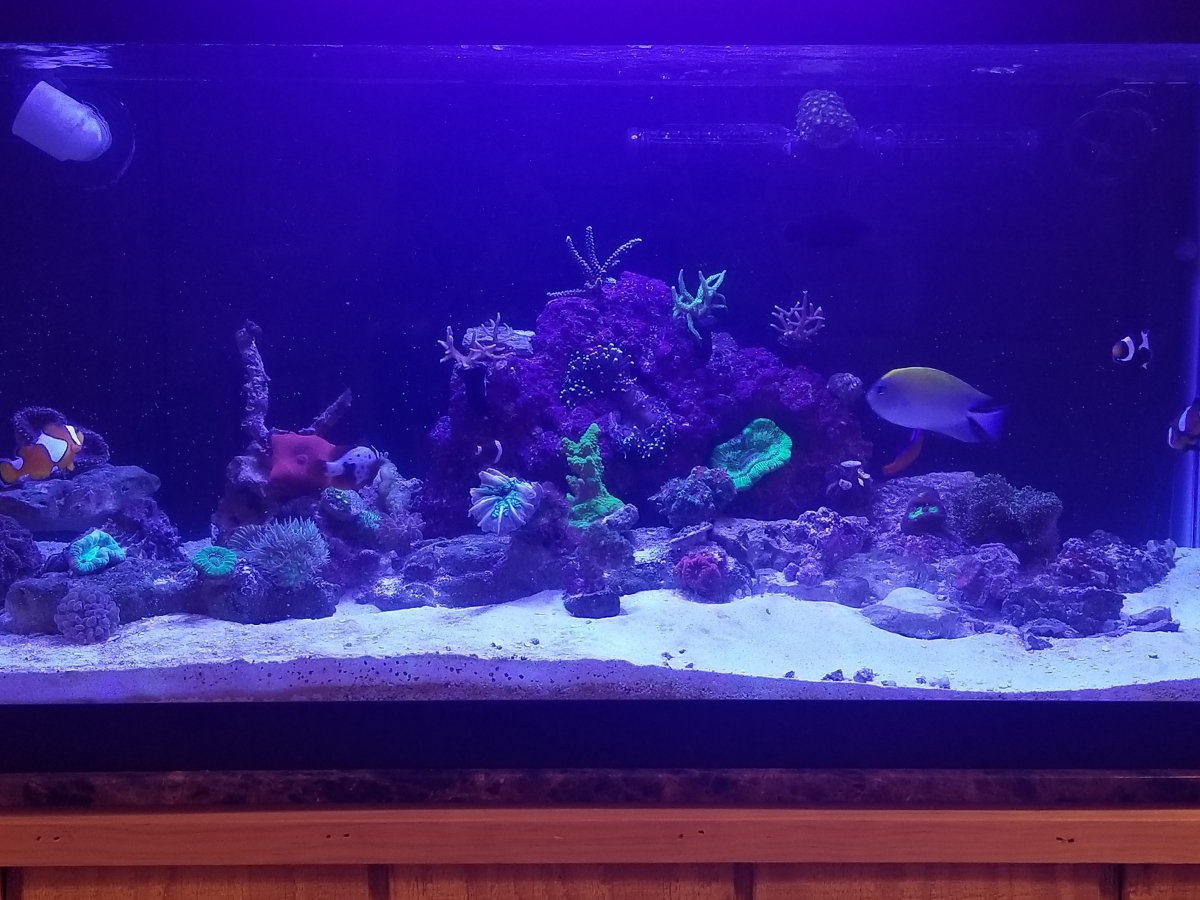 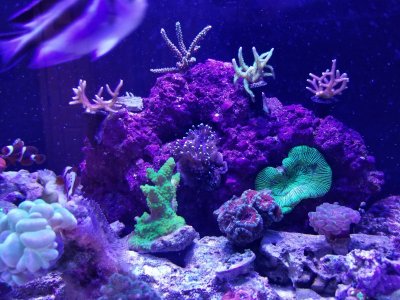 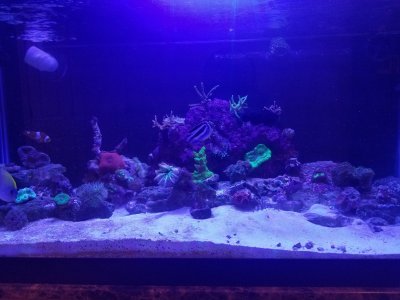 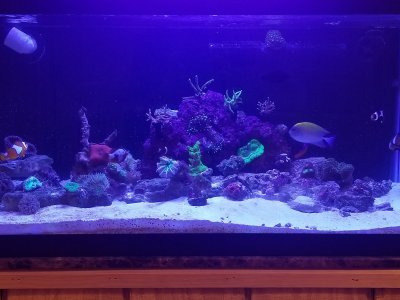 The light was still far under powered for SPS corals, so I build a 4 bulb t5HO fixture in my floating canopy and added a bunch more leds. It was finally proper lighting, but it was absolutely blinding. 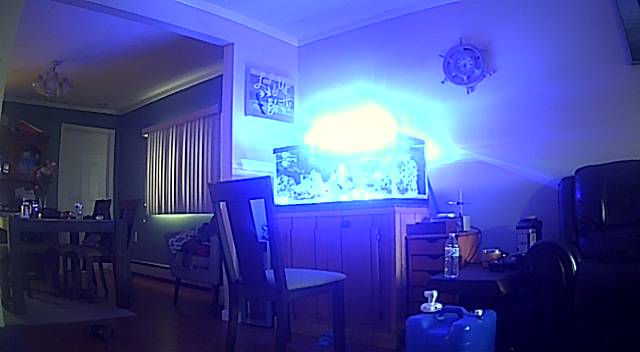 So, I built a canopy to shield us from light over spill. I don't have any pictures from the inside of the canopy, but I lowered the fixture a few inches and angled the t5s from the front and the back. 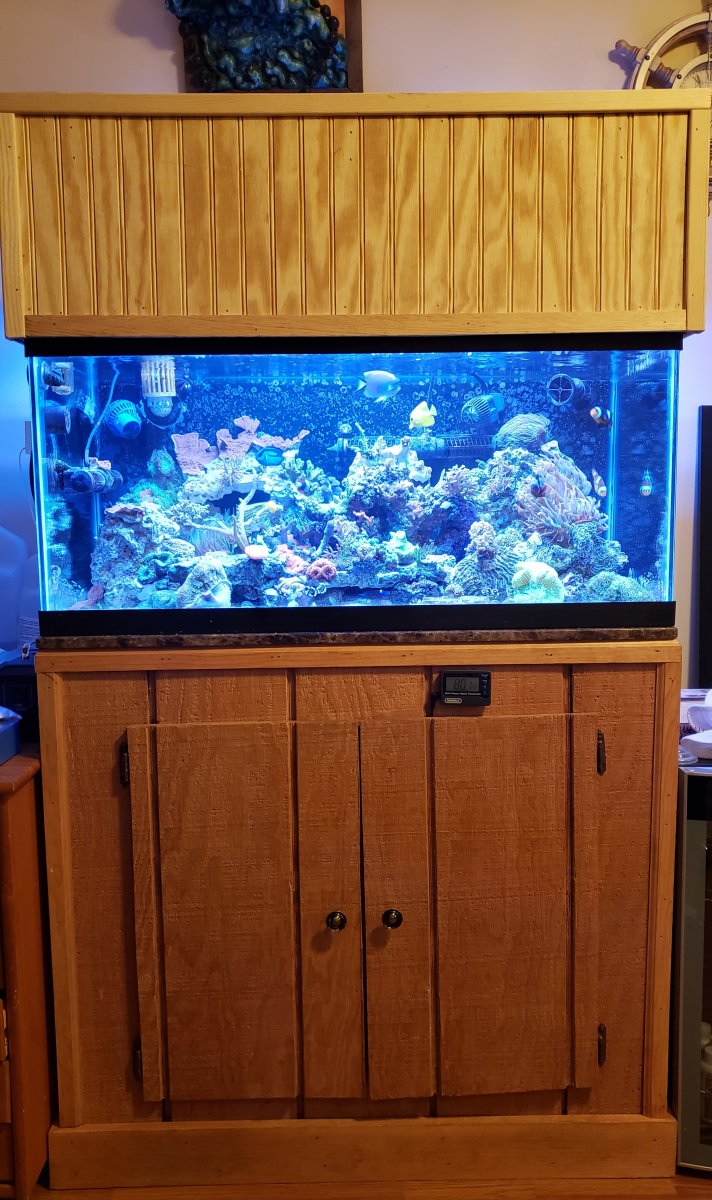 After 14 months of bulb use it was time to purchase new bulbs for the t5, but I decided against it. Instead I went with 4 radion clone pucks that I purchased on ebay for $30 a piece. I wired it up with my nanobox duo and used my recently built reef pi as the controller for the light.

Recently I ran into two issues. My nanobox duo failed on me again because its a piece of junk, then my driver board burnt out due to humidity in my stand. So, now I'm waiting for the parts to come so I can get rid of the nanobox duo, adding two radion clone pucks to replace it. Since this is my first experience building a light like this I made some mistakes that I'm going to fix when I make the switch. I plan to document this whole process and the complete new fixture.

The fixture will be a total of 6 radion clone pucks, an acrylic splash sheild, 3 large heat sinks, aluminum frame, and cooling fans. THis will be wired to a control box that I am going to setup to house my reef pi, power supply and light driver boards.

Your tank is really beautiful!

I wish I had your skills to set up my own lighting and reef pi. I love that your documenting everything to help others learn how to build like this. I'll be following along
OP

I wish I had your skills to set up my own lighting and reef pi. I love that your documenting everything to help others learn how to build like this. I'll be following along
Click to expand...

Thank you very much. I've come a long way from the GHA ridden disaster that my tank once was.

If you have any questions with reef pi or lighting I'd be happy to help here. I've made some mistakes in the past, but I've definitely learned from them
A

Title made me stop quick!! Born and raised in queens ny! Nice build!!

Slave to my wife's reef desires

I wish I had documented our tanks' progress more as we learned how to do things in this hobby. Prior to even buying our first tank I think my wife and I spent over 200 collective hours watching videos on reefing (especially the entire, and I mean ENTIRE BRS series of videos), read hundreds of articles, read hundreds of research papers (rather than just opinion papers), but am amazed at the TONS of stuff we still just don't know about the reefing hobby. Your journey in a few photos here show that learning curve as well. Well done, keep reefing!

Phildago said:
Thank you very much. I've come a long way from the GHA ridden disaster that my tank once was.

If you have any questions with reef pi or lighting I'd be happy to help here. I've made some mistakes in the past, but I've definitely learned from them
Click to expand...

WOW, Amazing transformation!
I guess there is hope for me
OP

Salinity is on point, alk is acceptable and CA is a bit low so I'll increase my dose to try and reach 420.
V

Have a link to those light pucks? I have built my own Leds before but I think for my next build I’m trying to avoid the draw to build and just buy something completed.

Vwluv10338 said:
Have a link to those light pucks? I have built my own Leds before but I think for my next build I’m trying to avoid the draw to build and just buy something completed.
Click to expand... 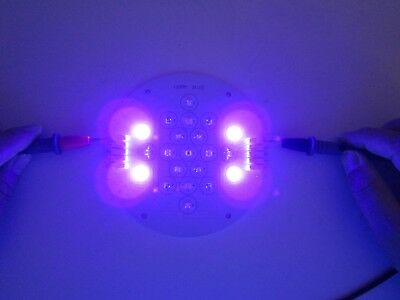 Theyre really great. They have the spectrum listed on the page, even the white channel is balanced well enough to run on par with blues
OP

I think my favorite resident is my swallowtail angelfish. Really beautiful and getting more so everyday.

Recently she started getting awesome yellow streamers on her tail. I'm not sure if this means that she is becoming a male, but either way I approve.

I just received a notification that my leda will be here soon. It says they've arrived in New York. I'm guessing it'll take another three days or so, but the planning begins.

I'm building a little shelf in the corner next to my tank where I will install all my reef pi equipment, power supplies and led drivers in a large old wooden box my sister used to use as a carrying case for the dolls.

The box is quite large, but will provide plenty of space for all 3 of the power supplies and the walls are thin enough to mount my wore connectors and easiest drill to mount the electronics.

I think this is a project for sometime next week. I applied to work pretty much everyday next week though (emt shifts), so we'll see what I get and how much time I can dedicate to this.

The whole project will consist of drilling the box, mounting the equipment, taking down my lighting fixture, removing the center lights (junk nanobox duo), cutting the aluminum to fit my new heatsink in, mounting the lights and the heatsink to a 12x12 aluminum sheet, mounting that new piece in place of the nanobox fixture, then wiring it all up and mounting it again.

Luckily, I think I'll be able to switch most of the wires to the new fixture and led driver boards so that should save a bunch of work.
OP

I mounted the lights on an aluminum plate with a heatsink mounted on the other side. I plan to mount this in the center of my current light fixture as the next step. When I mount this light I'm going to need to rewire everything, so lll be mounting all the drivers and power supplies in a box as well.

Yesterday I put my light together and wired it up with the new power supply and driver's.

I couldn't get too many picture because it was very complicated and I was too focused on getting it done.if anybody wants to see anything specific I can get a picture of it though.

These are the pics I did manage to get 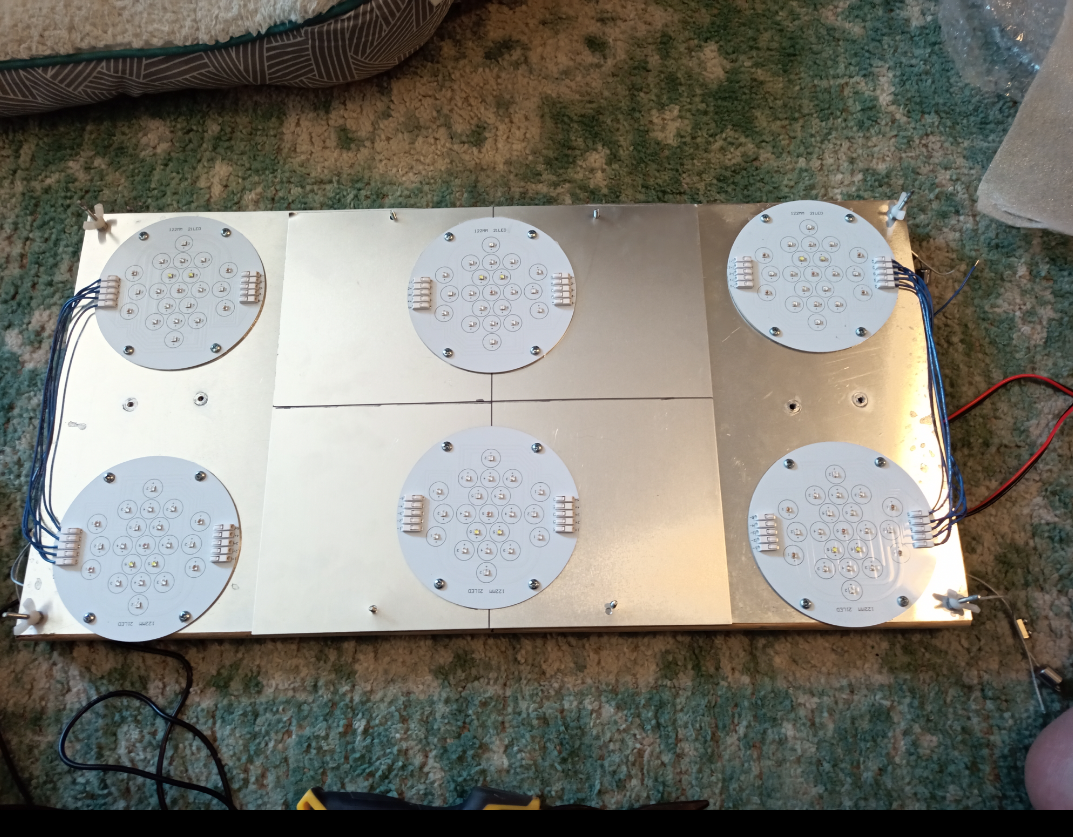 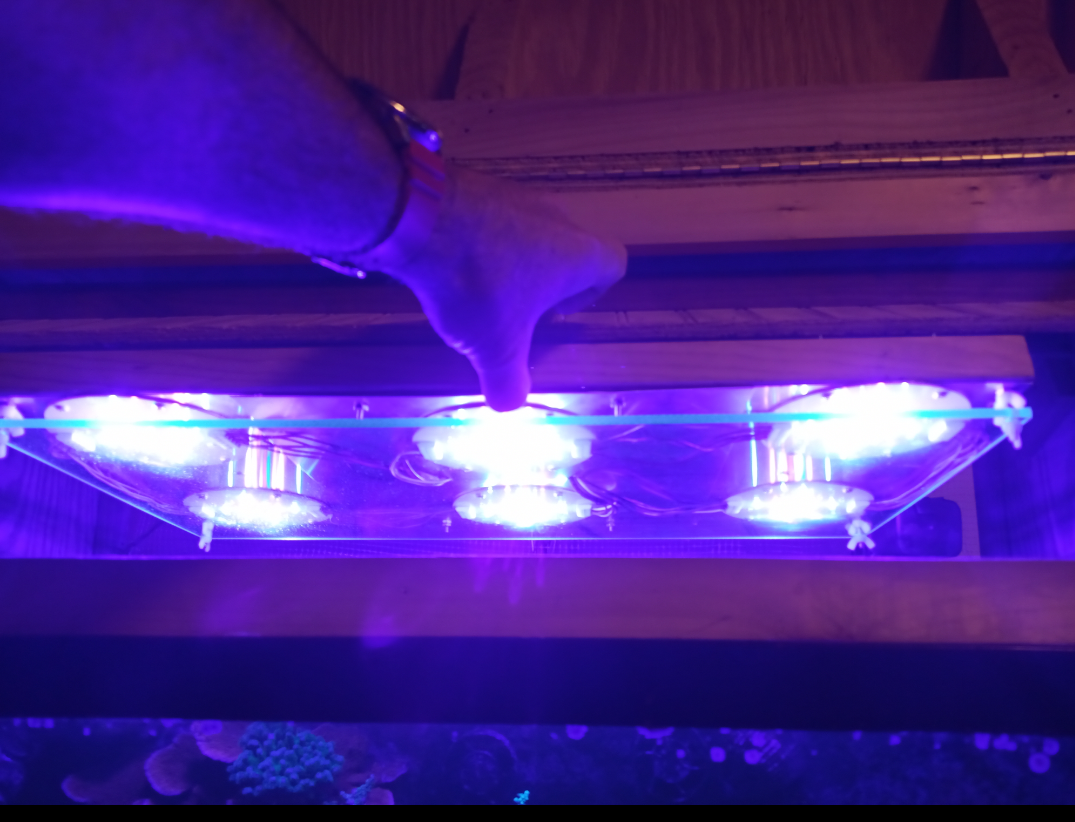 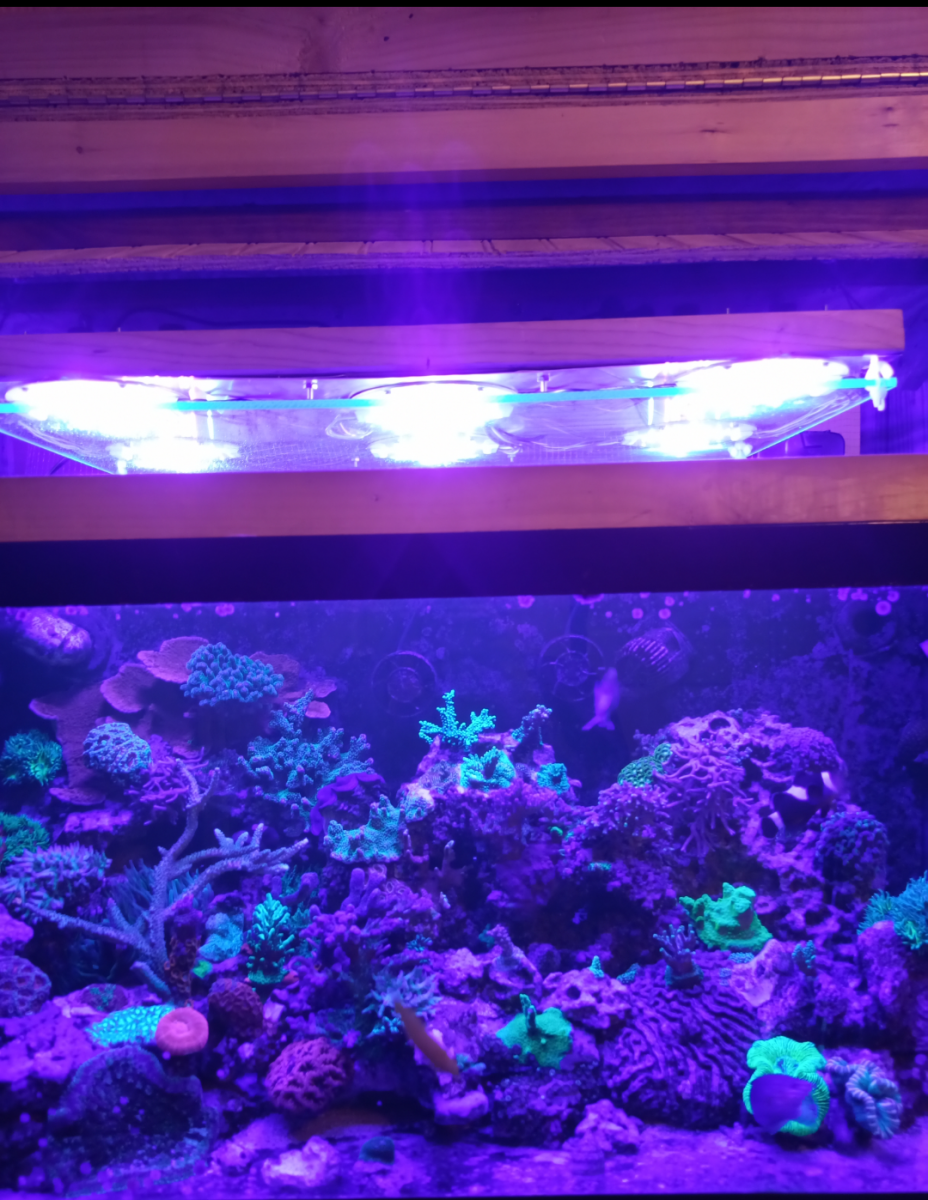 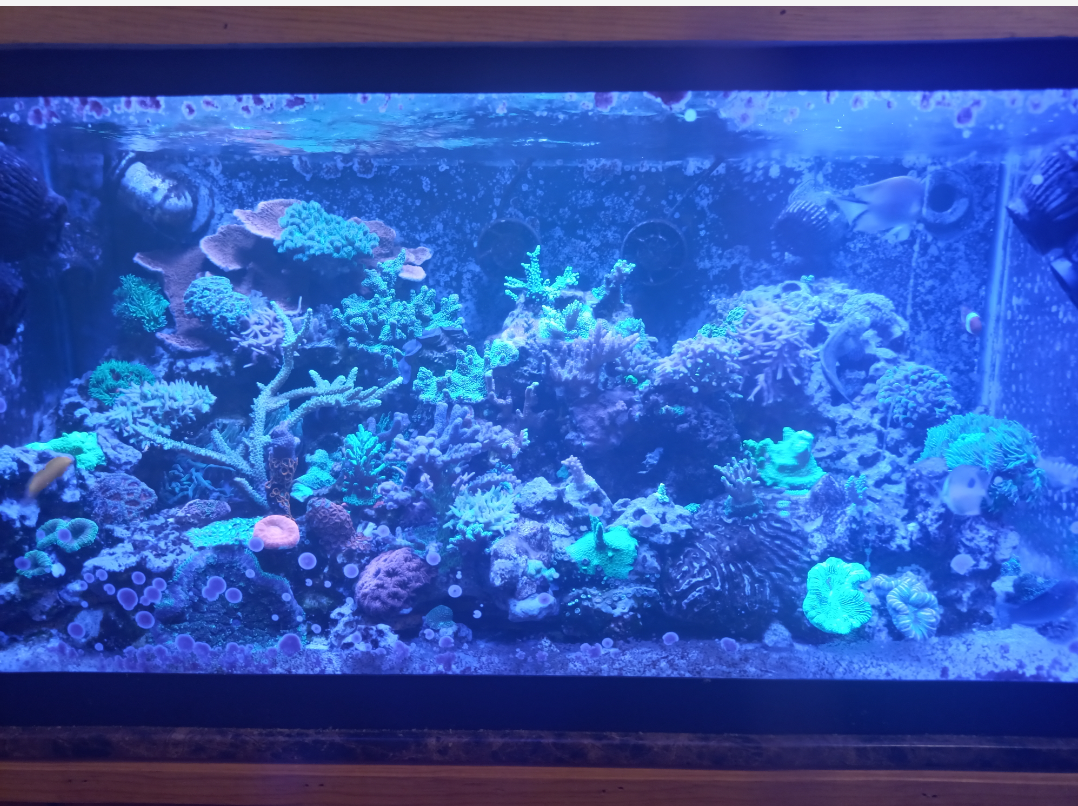 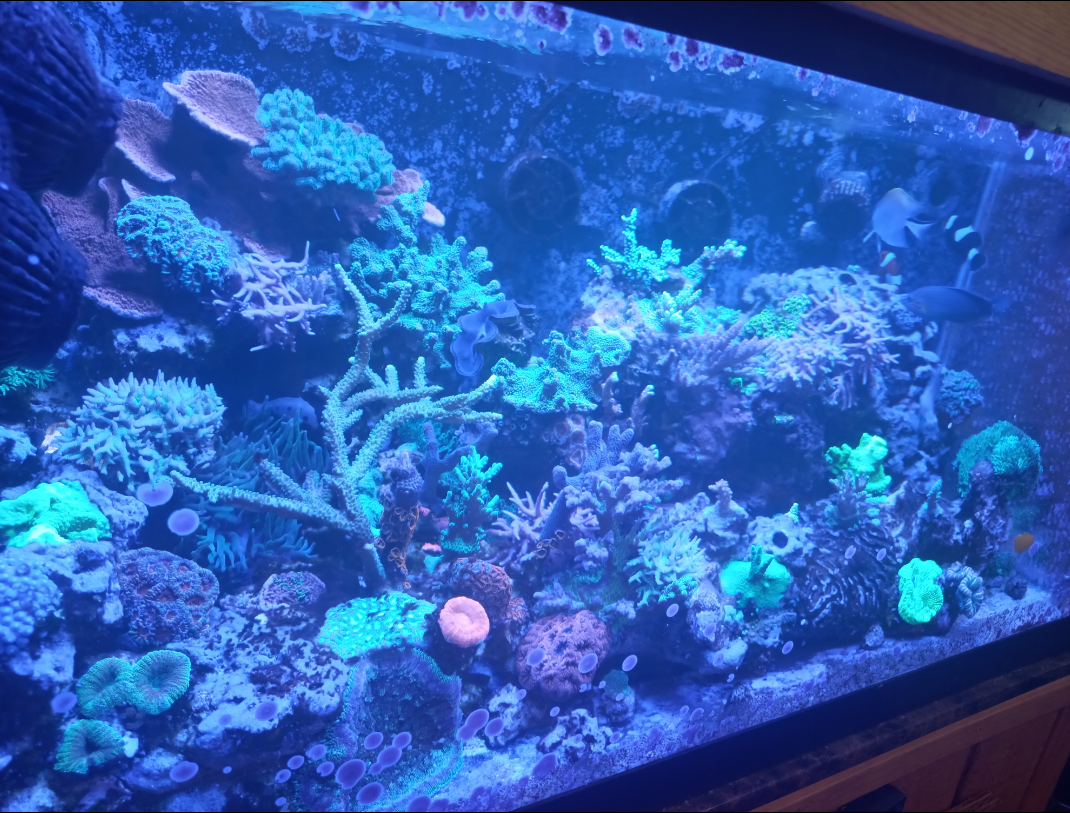 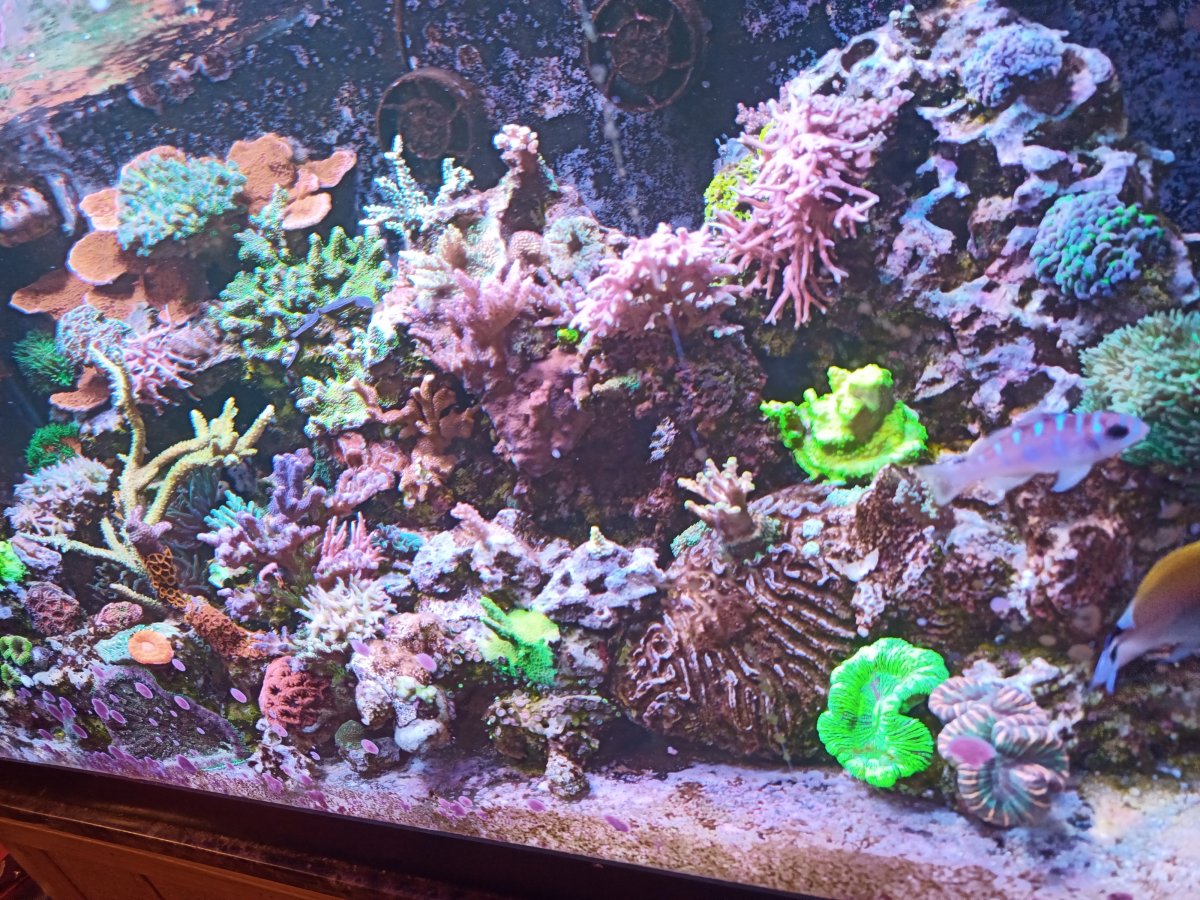 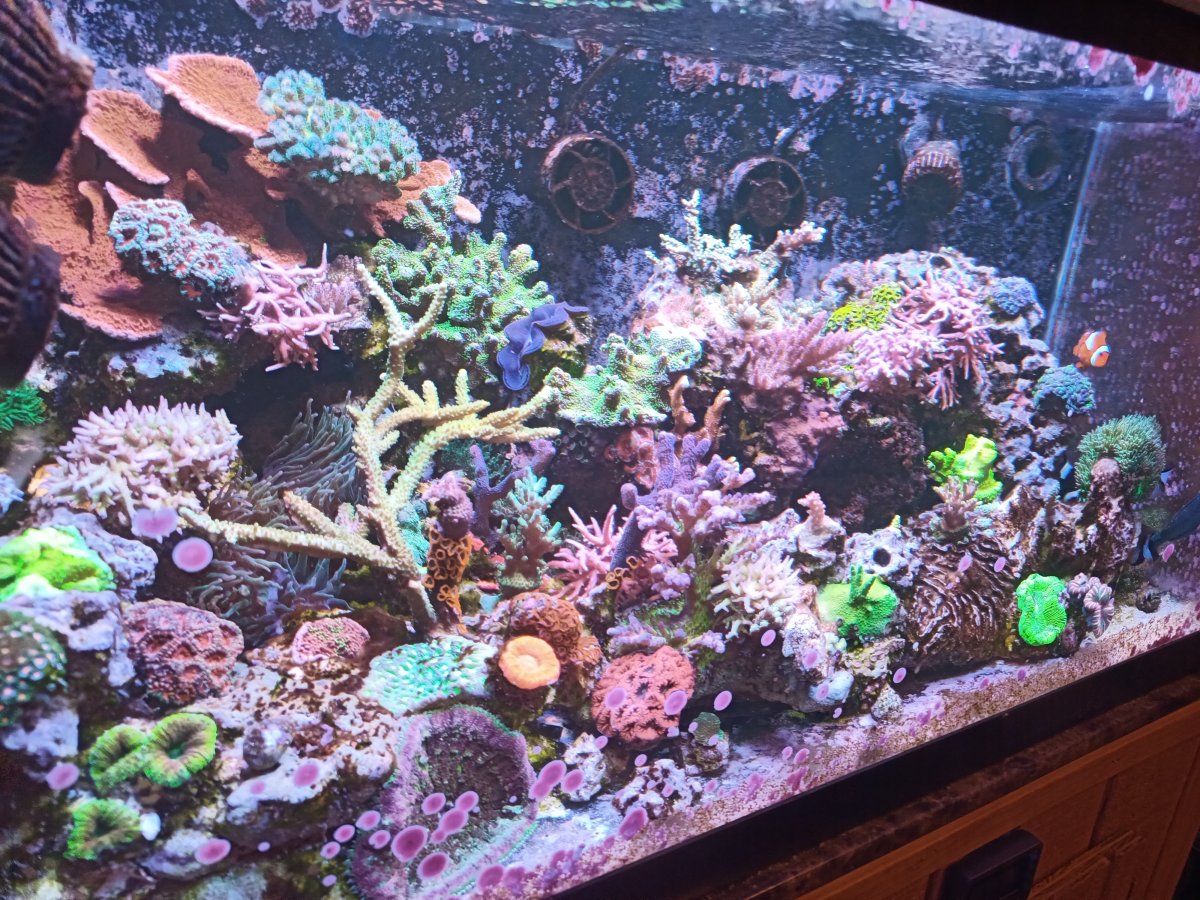 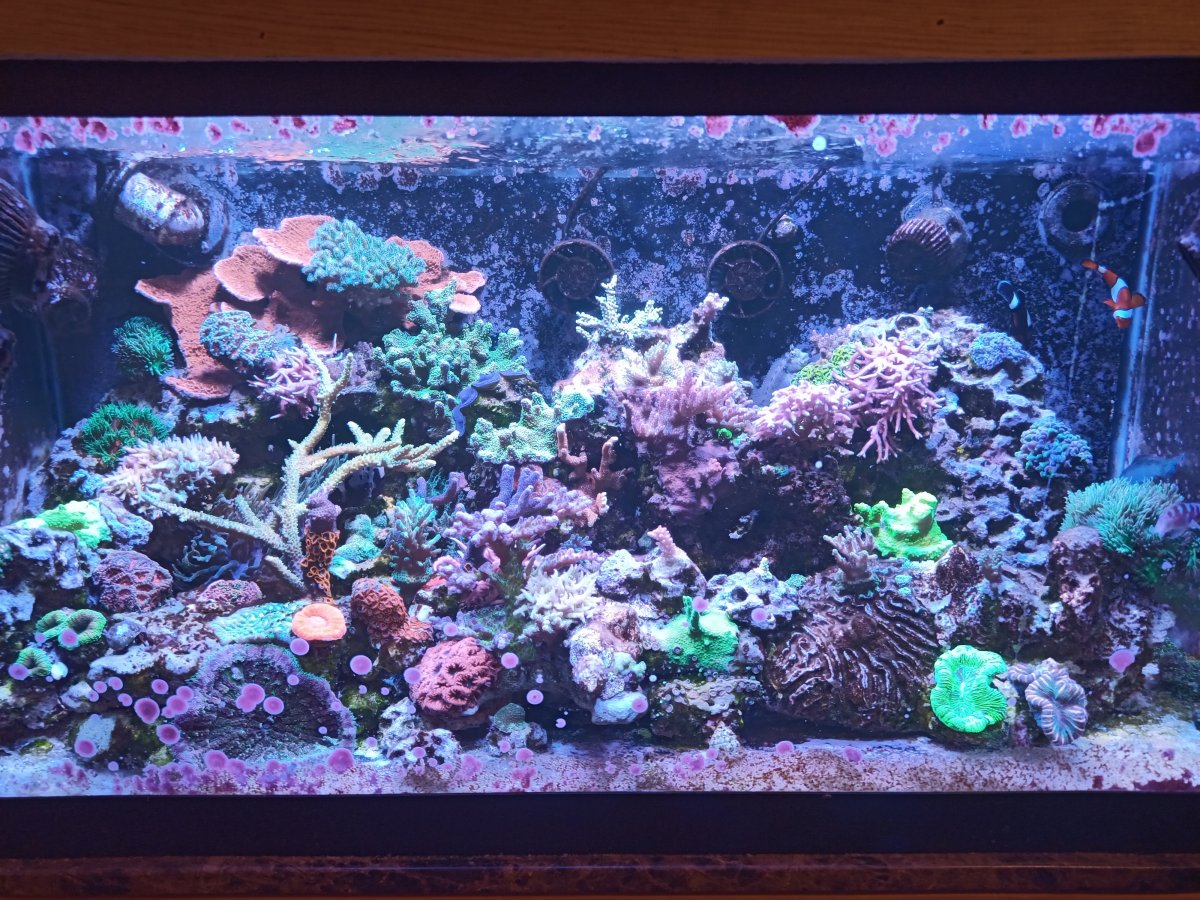 I've been practicing a keep your hands out of the tank method, so I haven't scraped the glass or done a water change in over 3 months.

I think it's just about time though, coralline is starting to obscure my view and the water could be a little clearer
OP 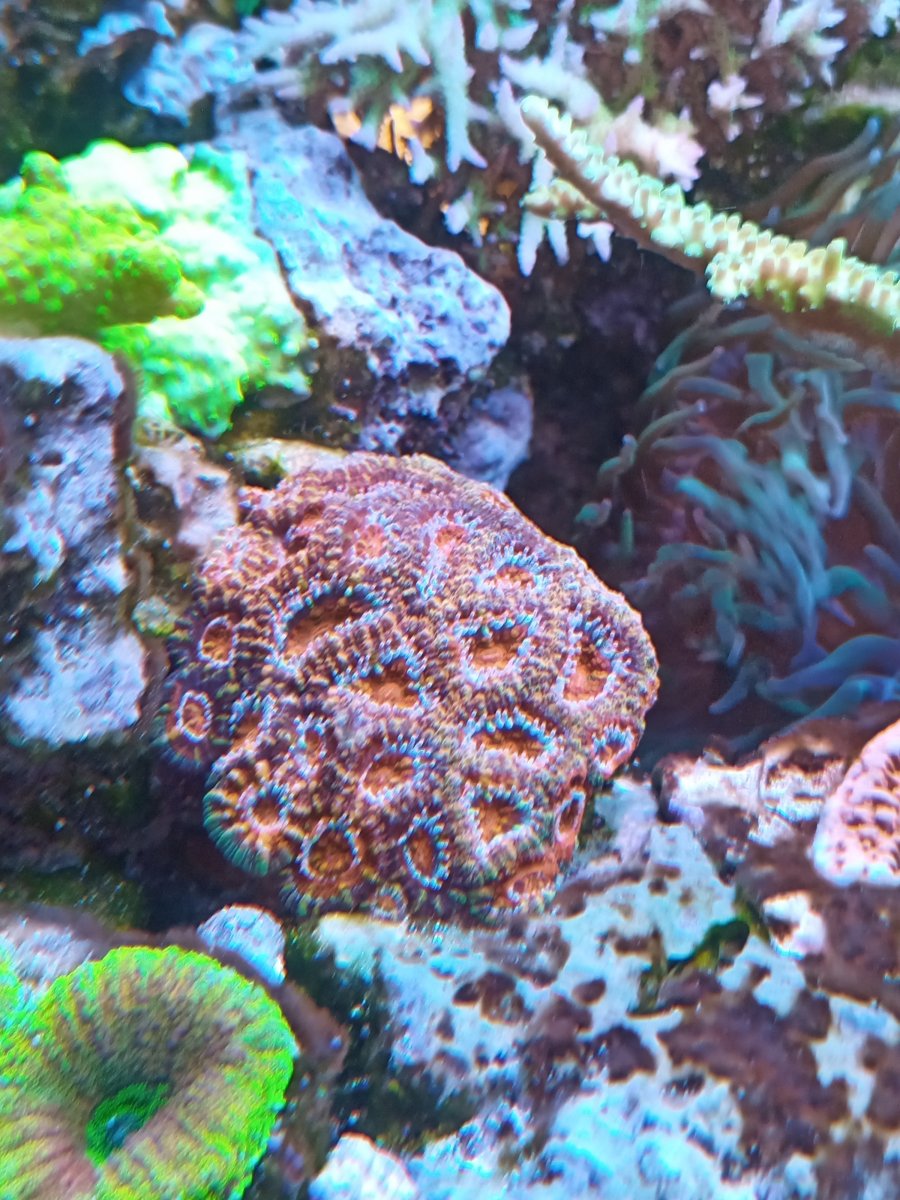 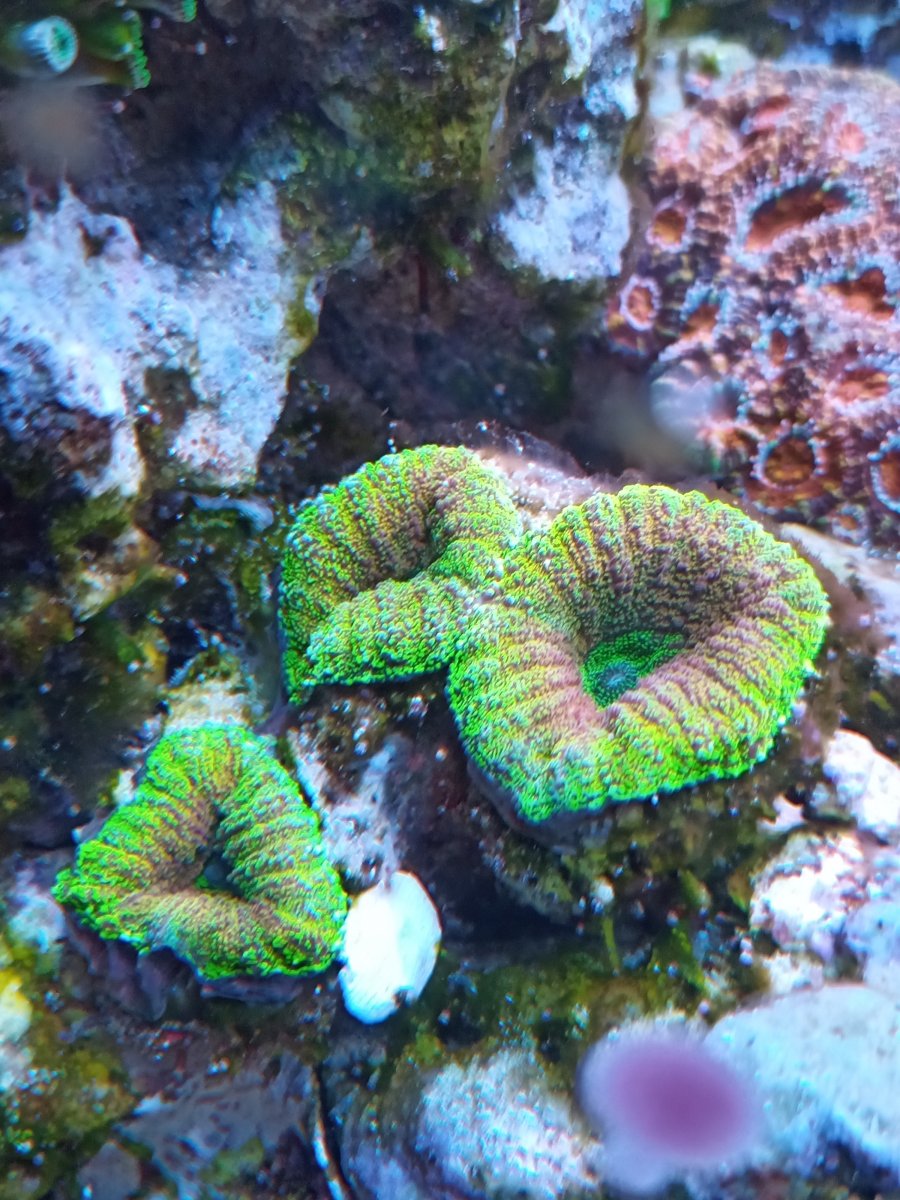