Decided to set up a SCA 50 gallon cube I've had sitting around in the garage.
The setup was purchased used a number of years ago as a Christmas gift for my son. It was setup but my son lost interest and eventually I tore it down and bought the setup from him.

I setup the tank another time and thought of doing a seahorse tank but a move put a stop to that
I now plan to go LPS and zoas, moving most of the LPS out of my 270 gallon SPS dominant tank. 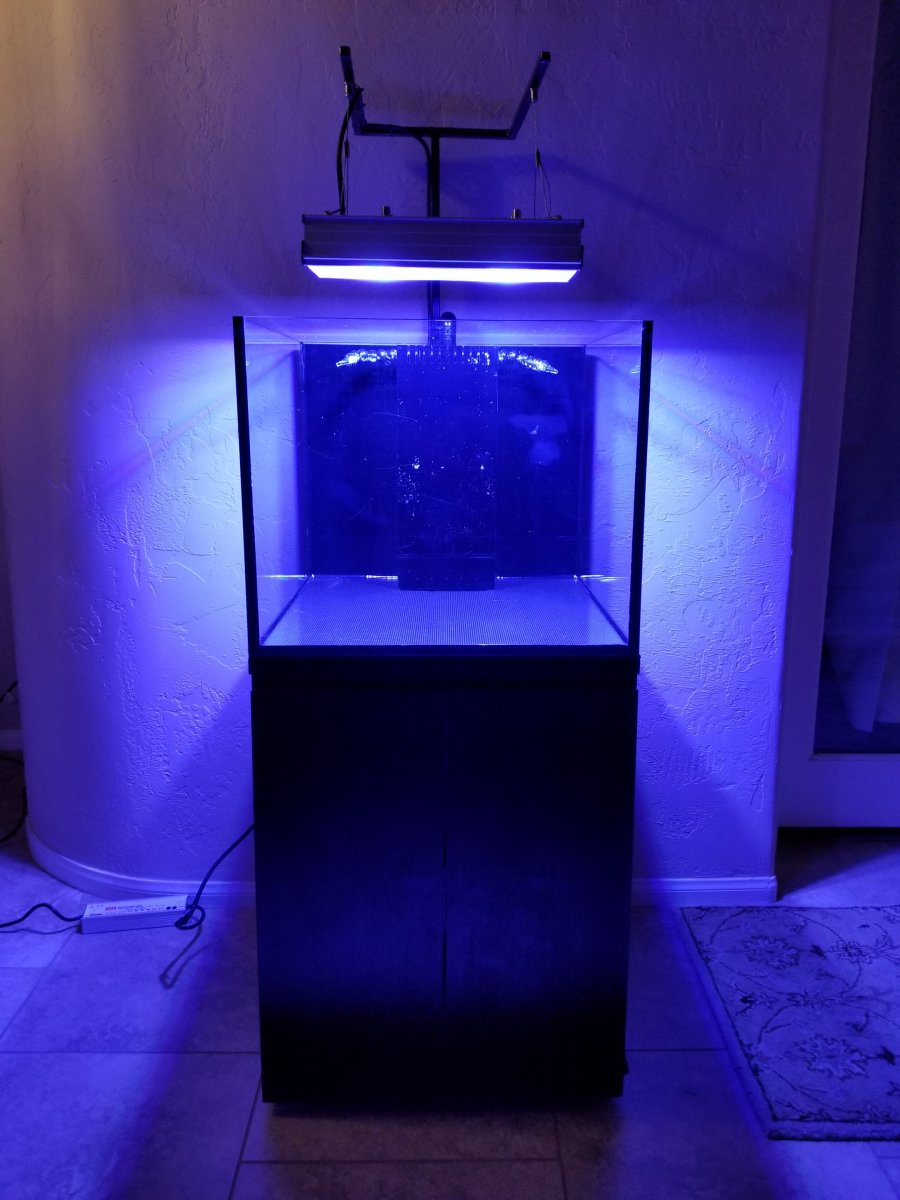 Here is the tank in the house. Light is a DIY I put together back in 2013 and should be good enough for LPS. Diodes consist of 3 ups ( 2 royal blue and 1 neutral white per), a mix of 410nm and 430nm violet and some OCW (Ocean Coral White which consists of 660nm, 495nm and 470nm diodes). Heatsink is a Makers.
Light hanger is made out of heavy wall 1" square tubing. 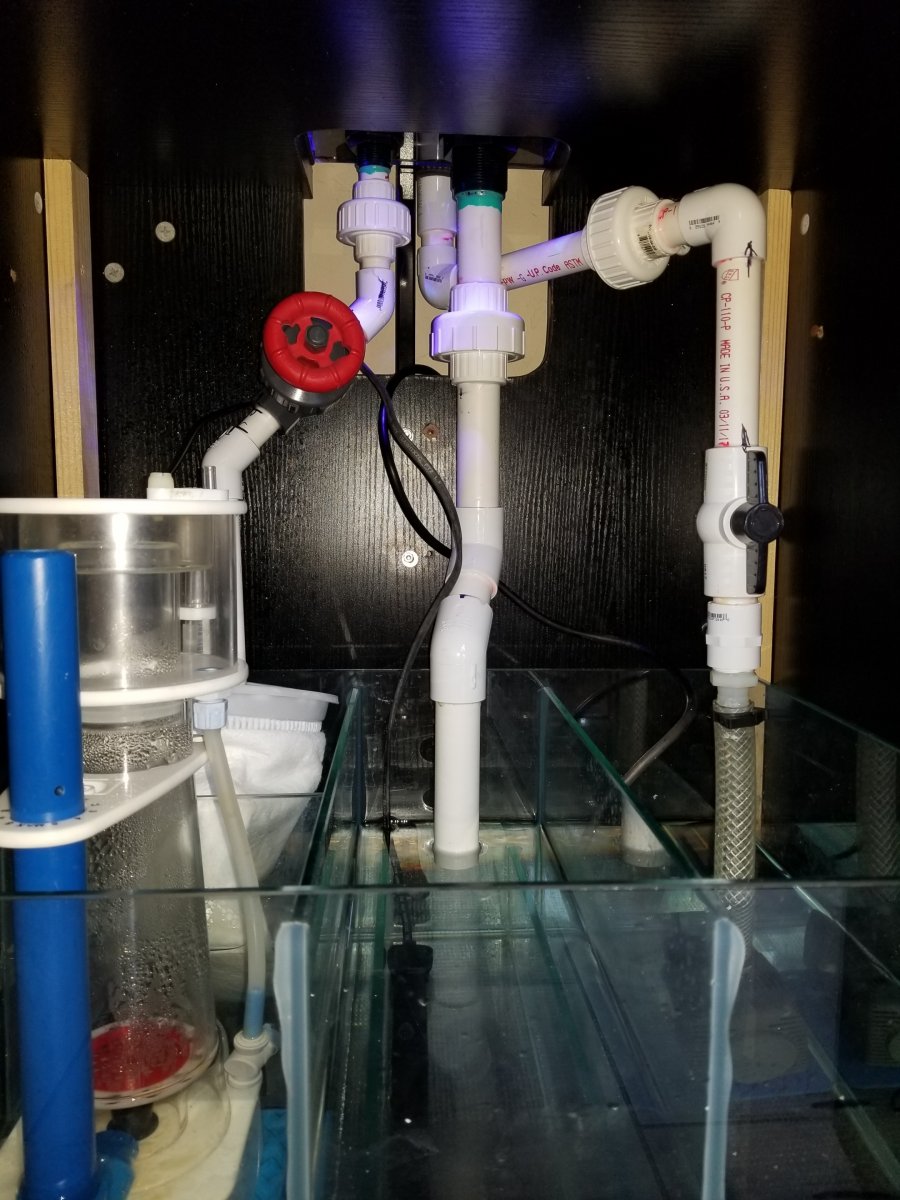 I did away with the stock durso plumbing and installed herbie drain. The filtersock (5 micron) is just in there temporarily until after I get the sand in the tank.

Tank is wet as of January 1st. I put together the rock structure with dry rock I have been keeping. I used epoxy to hold it all together. One piece is a rock from the sump of my 270g to seed the system. Rock was put in on January second and added some ammonia to begin the cycle this morning. Hopefully with the seed rock the cycle wont be too long.
Here are a few pics of the scape. 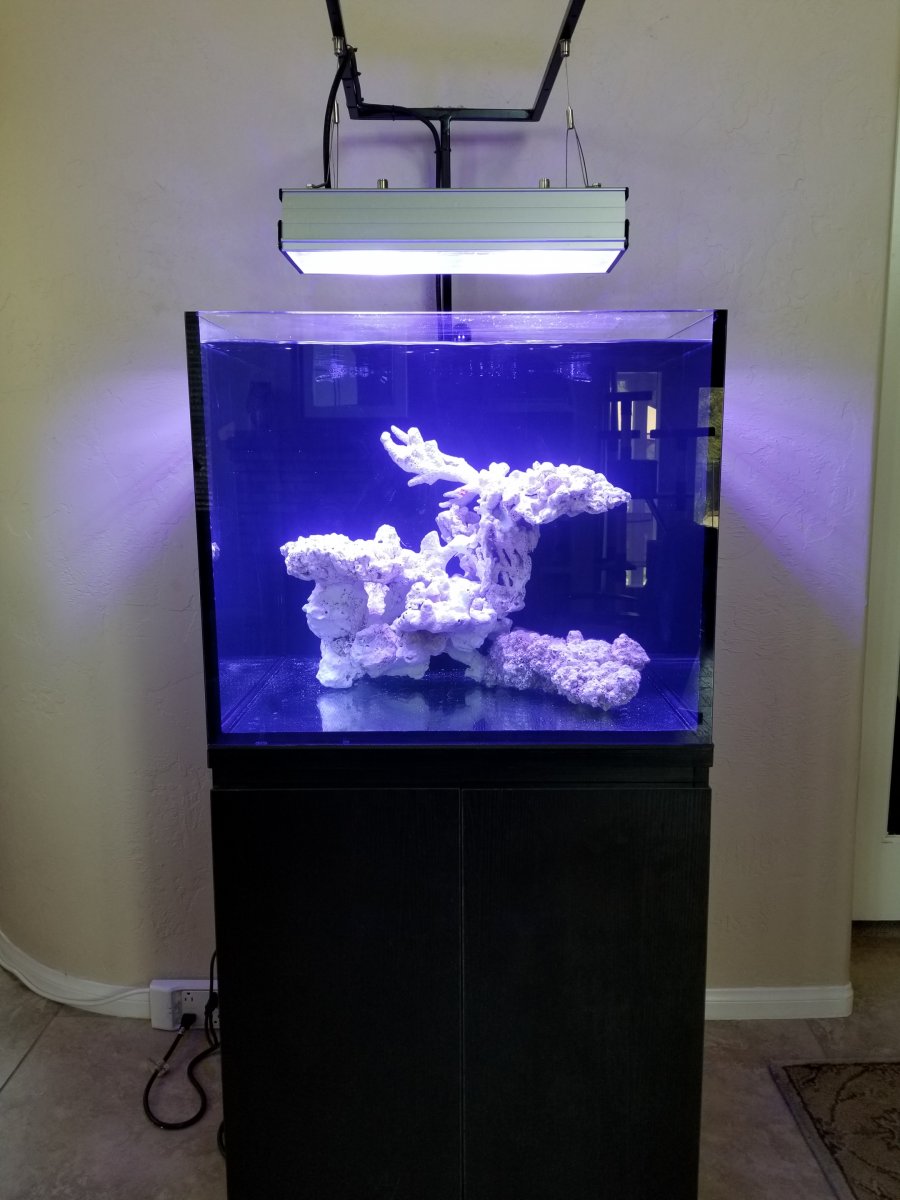 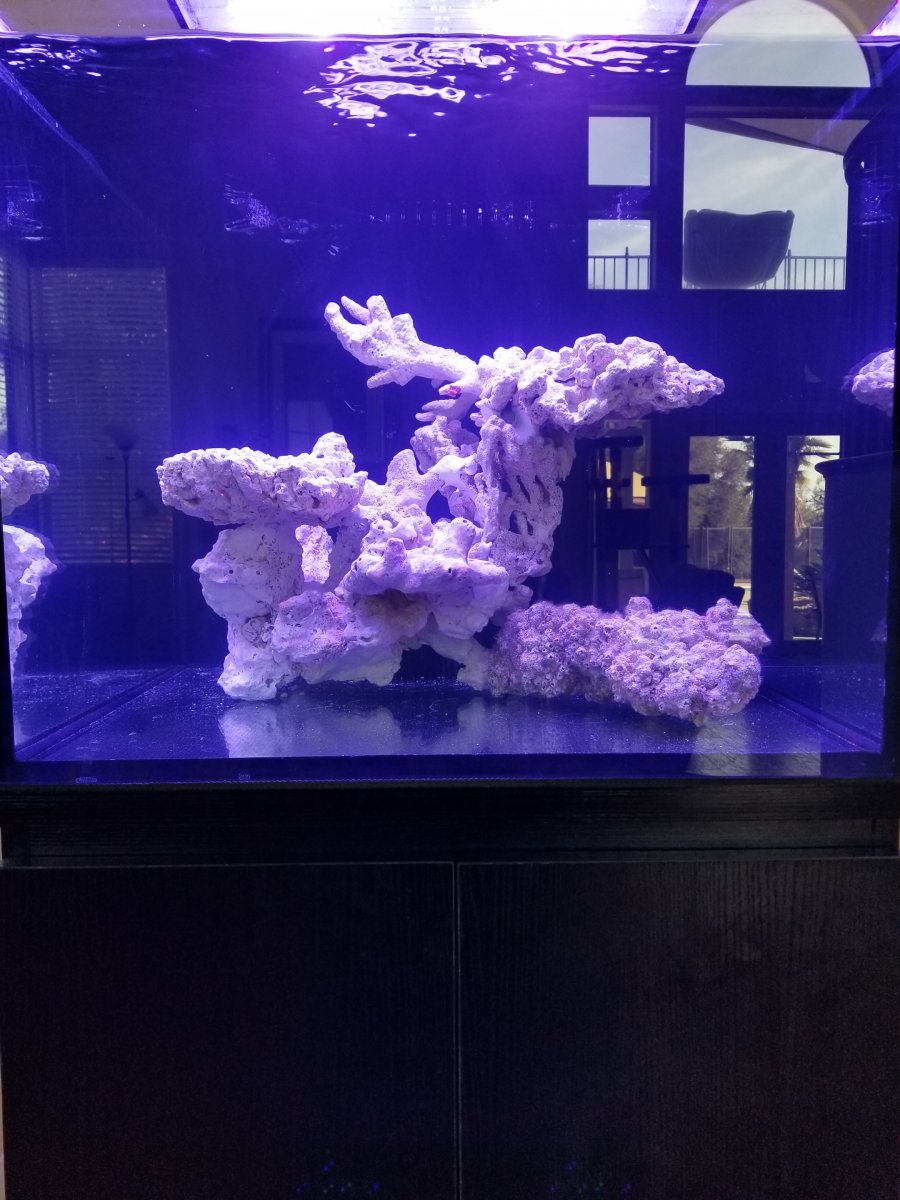 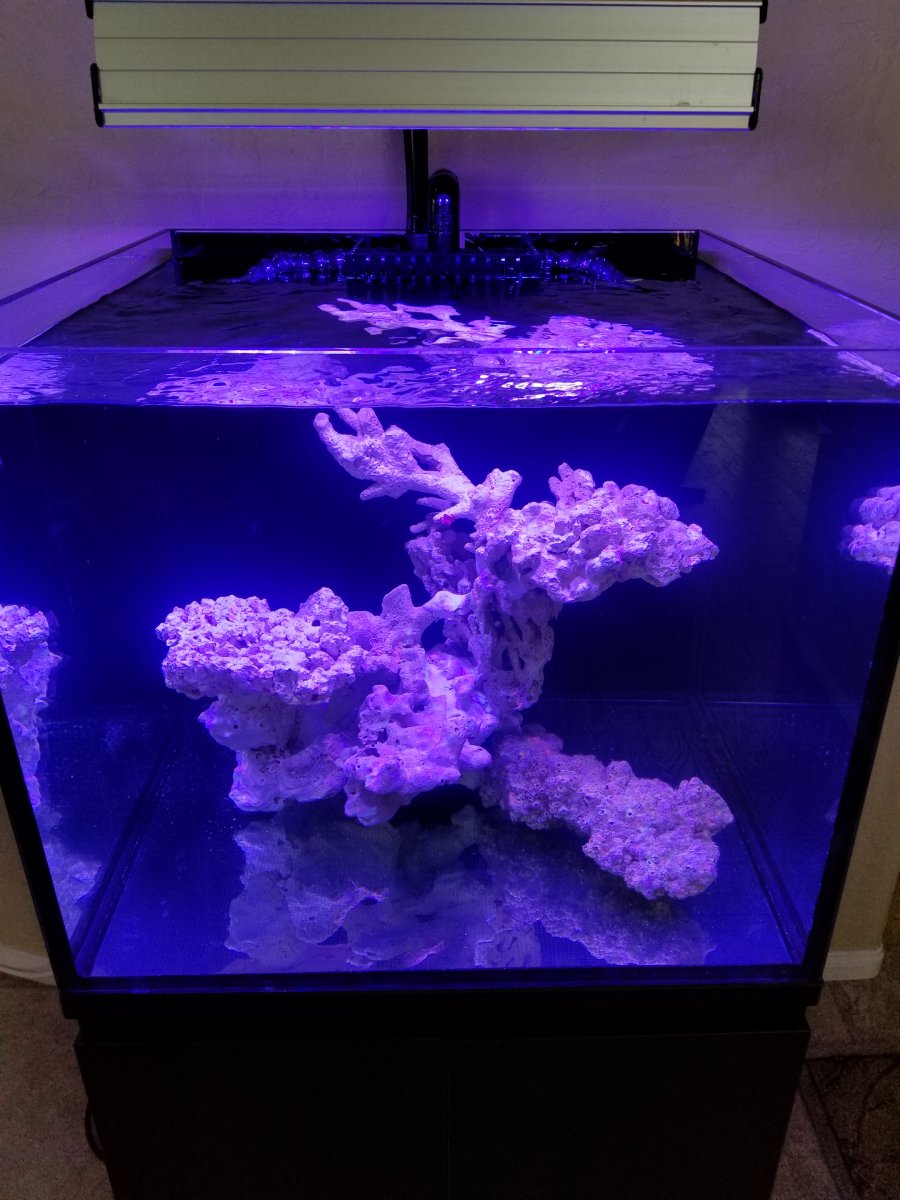 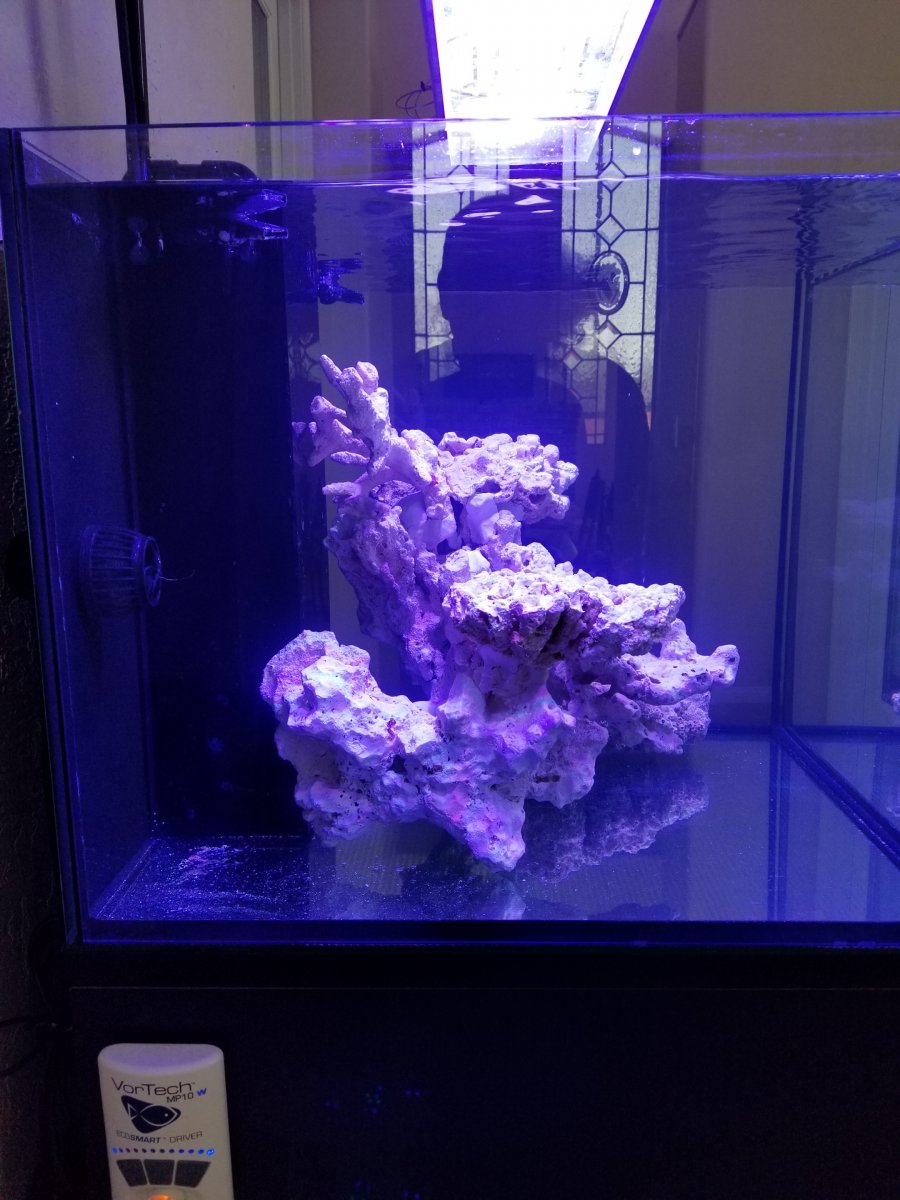 Sand isn't due to arrive until January 8th. Went with Caribsea fiji pink. Decided on the finer grain sand since the flow won't be too heavy.

Will update again once sand is in and the dust settles.

Good idea if you’ve got the time and space why not and good luck.
OP

Lorenzo Angotti said:
Good idea if you’ve got the time and space why not and good luck.
Click to expand...

Looking nice. I went with the Caribsea fiji pink and really like it. GL

S.Pepper said:
Looking nice. I went with the Caribsea fiji pink and really like it. GL
Click to expand...

Nice rock work, tank looks new how much was it?
OP

Thought it was time for an update...

A couple things on the equipment side; ATO was installed. The ATO is a Tunze Osmolator.
Flow is provided by an MP-40 and an MP-10. The MP-10 isn't currently installed as I found the wetside to be bad and need to order a new one.

Sand came on on 1/7 and added that evening.

Cycle finished on the 14th. I only tested ammonia and nitrates, not nitrites and they may have still been present.

Added some baby trochus snails that were in the sump of 270. Started with one then added a half dozen after a couple days.

Added a few zoas to test and no issues. 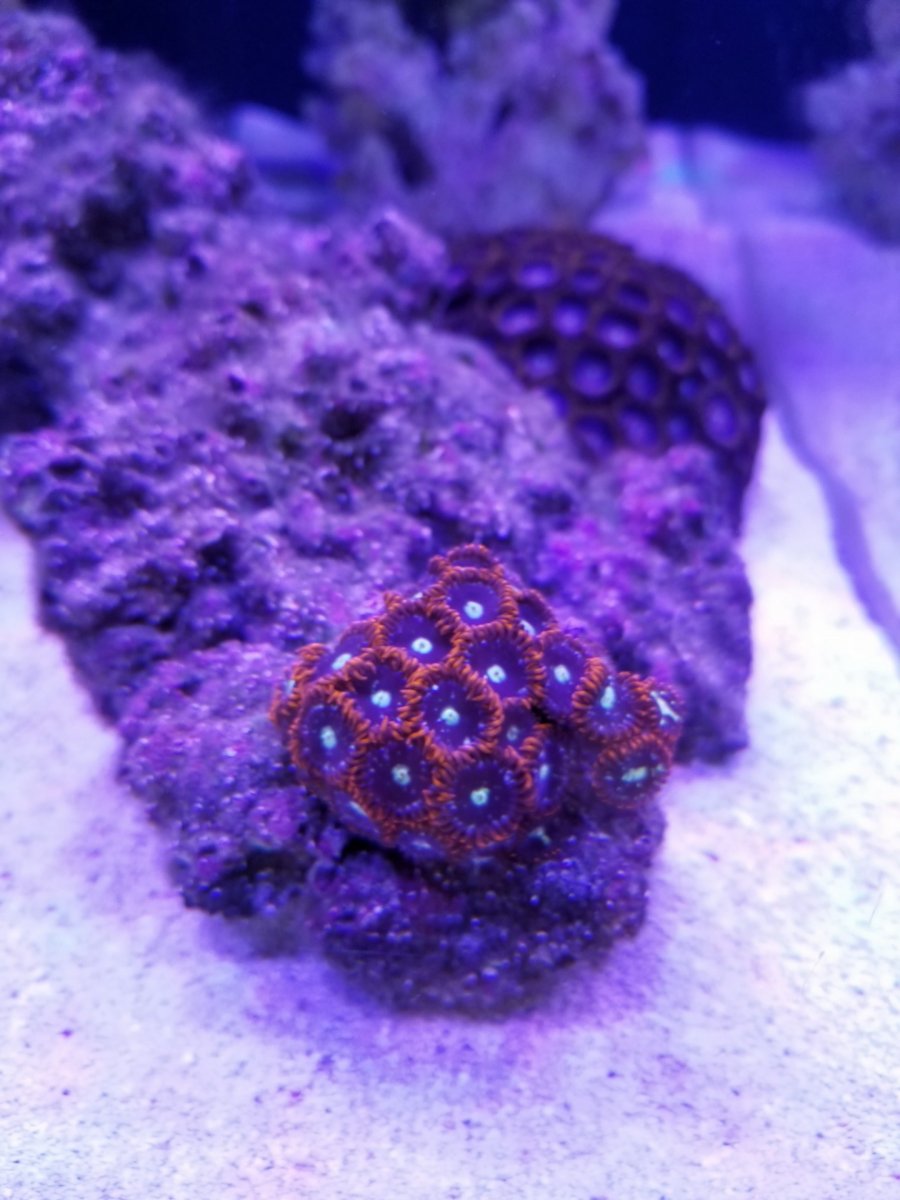 Went ahead and added my colony of red hornets. 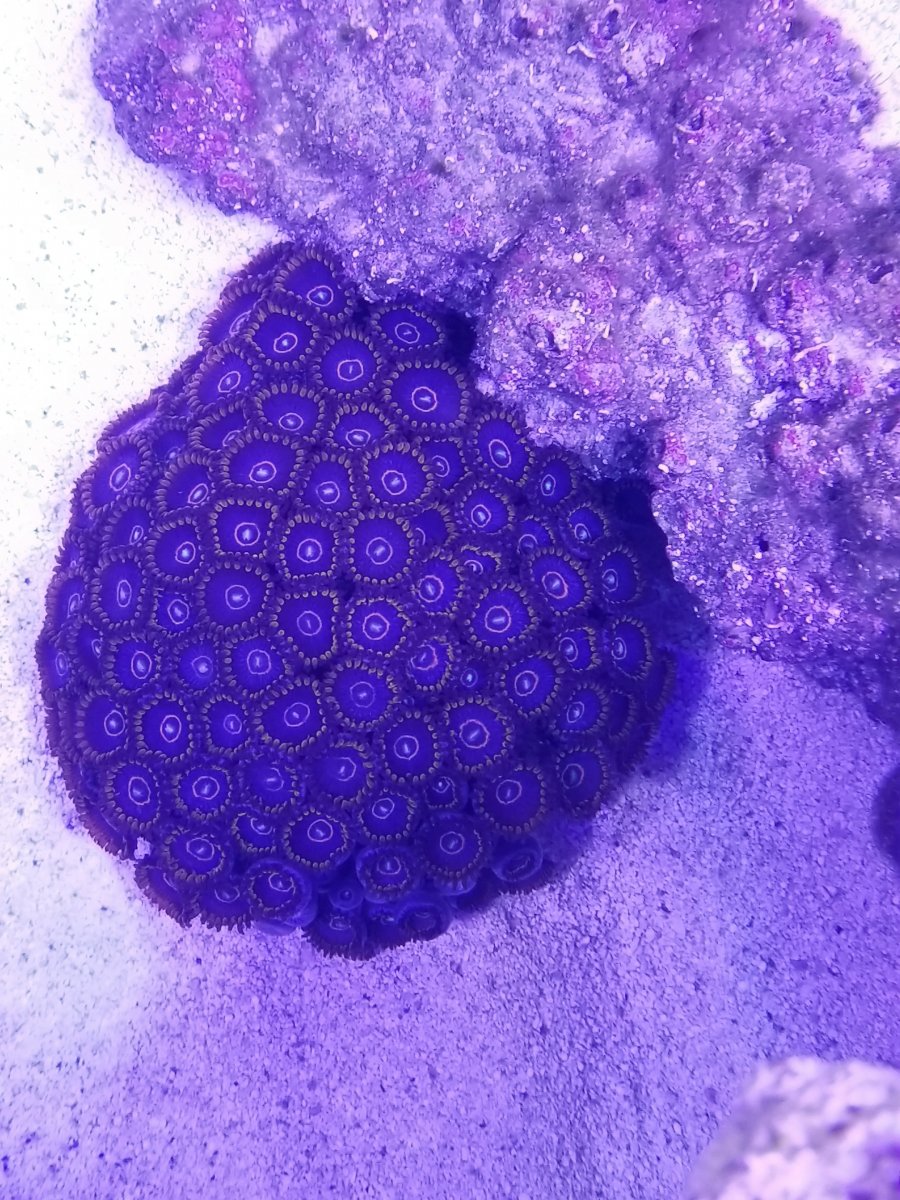 Waited a week (maybe a couple days shy) and all was well so added a few LPS (Blastos, Space Invader Pectinia and acan). The blastos and space invaded pectinia I had moved to a 20 long a few months back because of issues I was experiencing due to contamnination. I almost lost the space invader but has been recovering well. 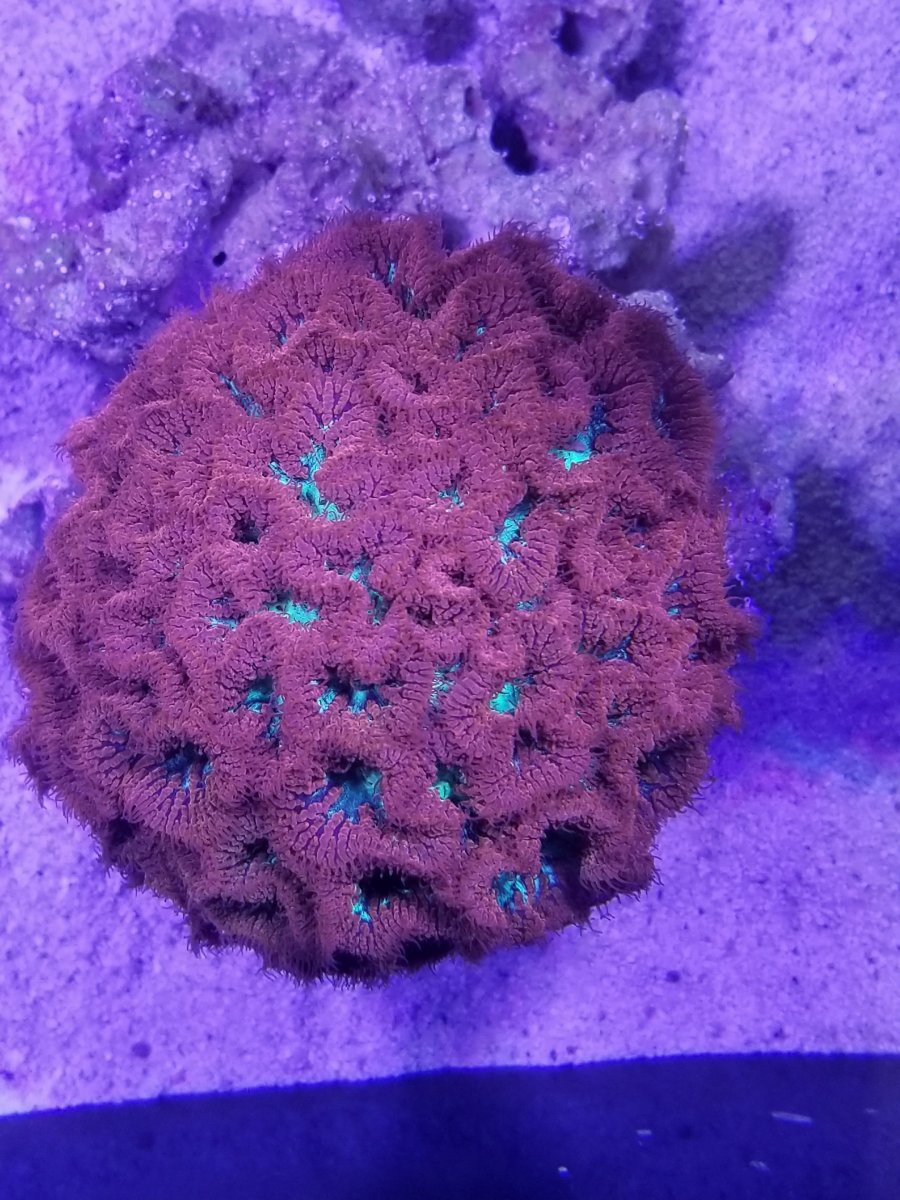 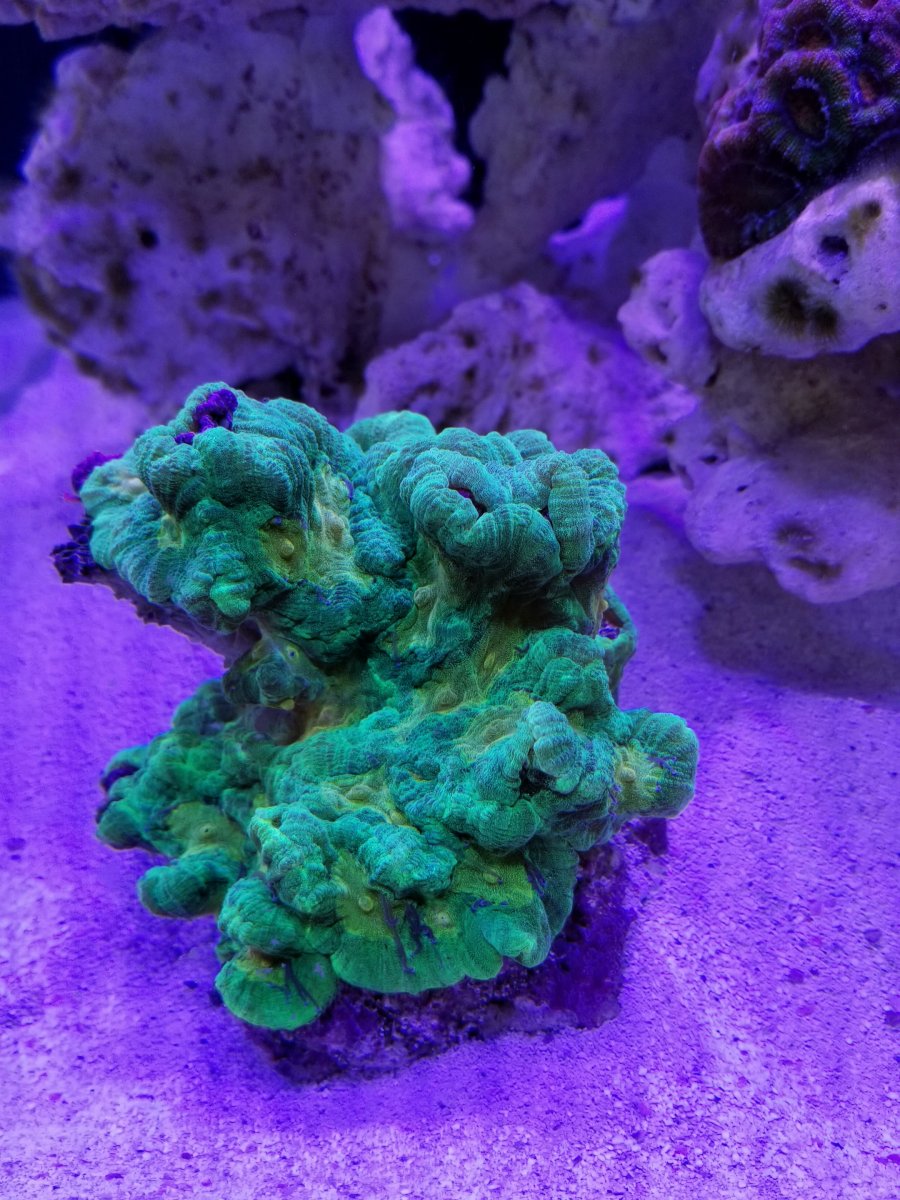 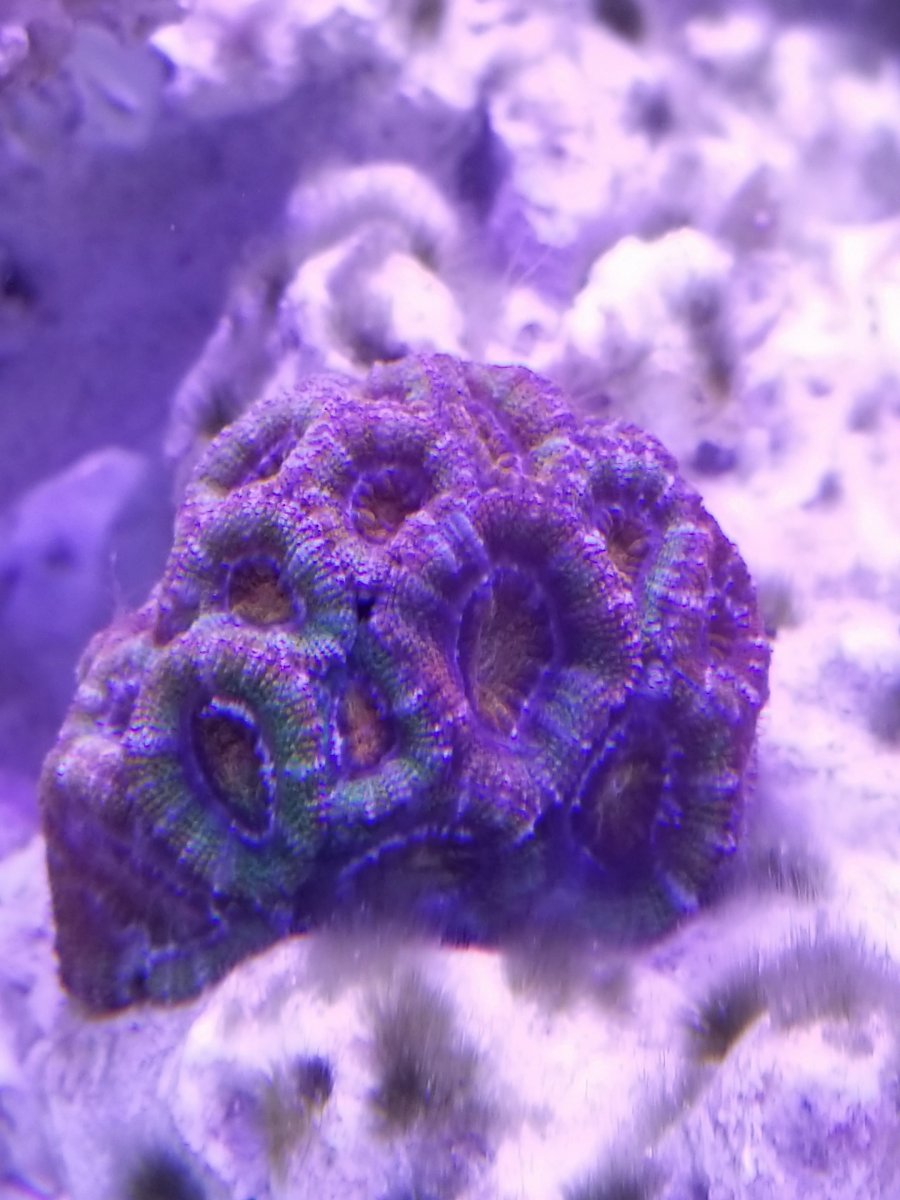 apologies for the bad image quality, the violet leds really mess with my phone camera. I need to break out my dslr sometime to grab some decent pics.

I will be moving over a branching lobophyllia in the next week and that will be it for awhile. I have shoulder surgery coming up and will be out of commission.
I will start adding a few fish and new corals in March/April.

Here is a full tank shot. Had a small diatom bloom that has cleared up quicker than I expected and now have some GHA. All and all things have progressed well. 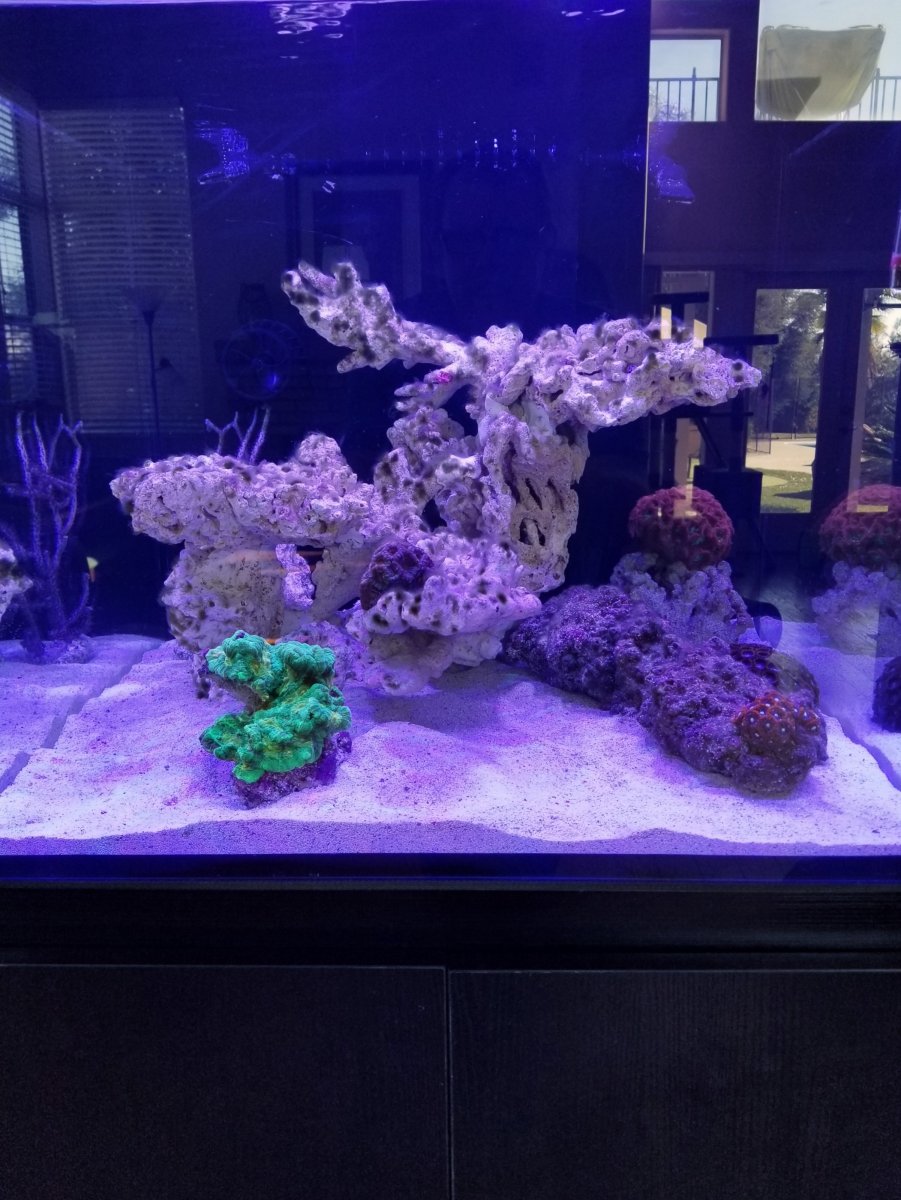 Well been deciding what I wanted for livestock and settled on a pair of gold bar maroon clowns. Maroons have always been one of my favorite clowns but never had them due to their agressiveness. I found this mated pair and pulled the trigger.
Will eventually add a bubbletip anenome. 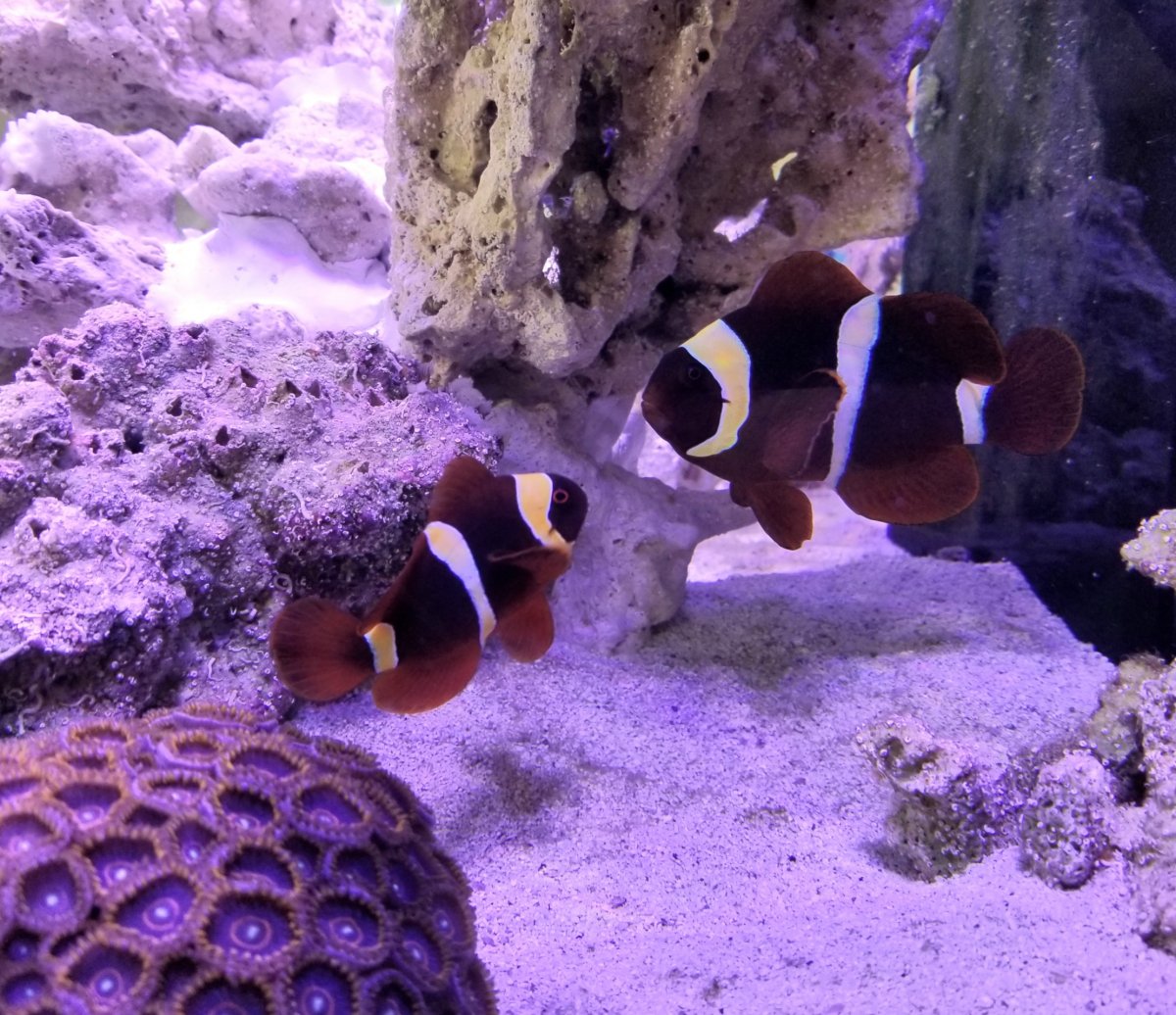