Posting this up as he's a tad bit celebrating- but this is the tank we recently designed and built (me and an old buddy did the building.) The tank has a 4" water level which is the same height as each of the tier's on the wedding cake itself, as we didn't want to have the tank overwhelming the cake's importance. a 1/2" acrylic "X" sits in the middle of the tank and supports the cake itself. a shelf/lid is supported by tabs mounted on the X which provides a cap to the water area and also gives a place to set the Ecoxotic stunner strips we used to light the tank. Koralia 2 provided circulation with a 200 watt stealth heater providing heat (with the small water volume, I was very concerned of keeping the temp stable, as is the sun provided a bit of an overheating issue, but things seemed to work out just fine.) A lid of blue tinted acrylic sat on top of the X as a lid, with strips of white opaque surrounding the blue lid to act as both a skirt that covered the lights and lights-shelf, as well as providing a fence to contain the brown sugar that covered the top to simulate the sand of a beach (the wedding itself was held on the beach with the guests facing the ocean, bride and groom stood under a cloth draped "gazebo" thingy that had a king palm (archontophoenix cunningham) planted on either side.)
All the coral livestock were from our collections and selected for being short but that would glow real nice under the LEDs. Borrowed a few damsels and a clown from a LFS, only problem was the clown went missing- small possibility he jumped, but I think the trachy munched him.
Anyways- photos were just taken with my droid2 and haven't done any touch up, so the tank is a little hard to see into because of the LEDs. And because I'm such a pro photographer (and was short on sleep) I remembered to live my whiskey & coke in the frame :nerd:

Setting it up in the garage friday night 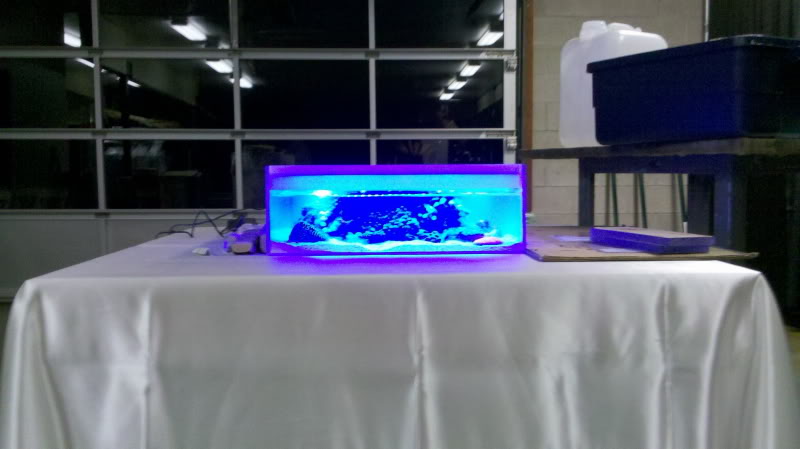 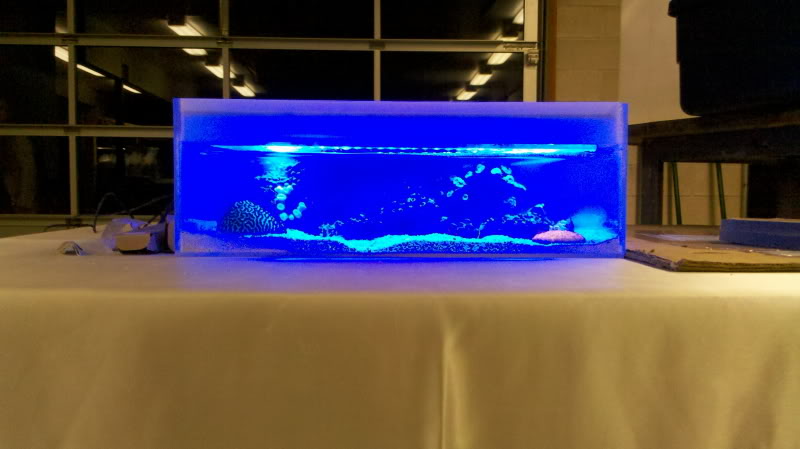 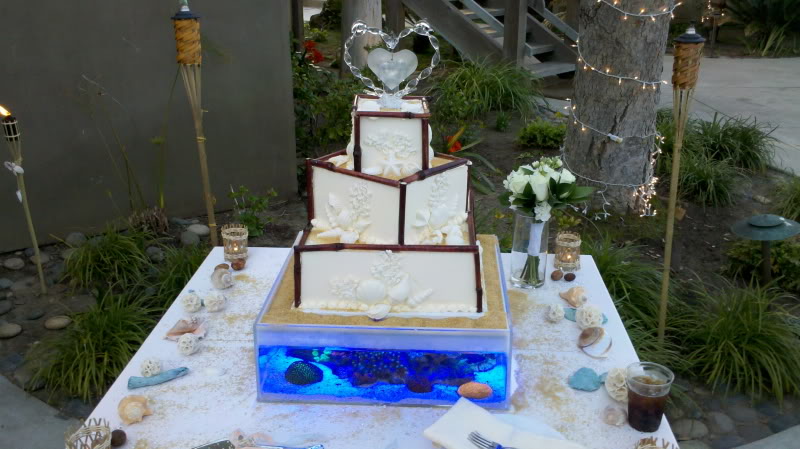 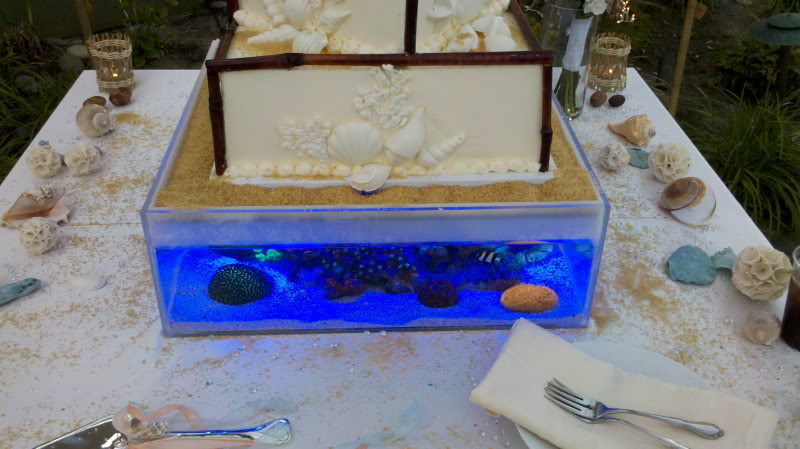 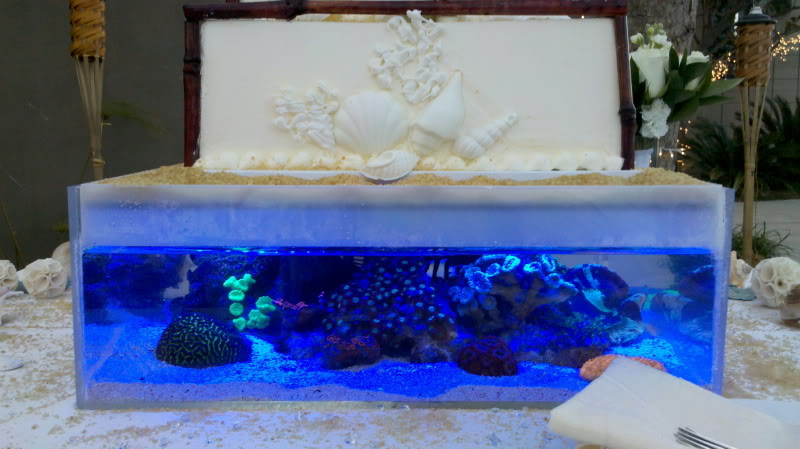 Pro photo's will be back in a couple/few months and I'll update thread with them, in the meantime, shoot Scubajay a PM with congrat's if you feel like :bigsmile:

Shaweet!!!! I should make my bday cake like that lol...

Dang!.. I want that for my wedding
... Oh wait, that was my wedding cake! :xd:
Huge thanks to my bro Brian (AKA - Drainbamage)! Long after people have forgotten about who's wedding this was, they'll still remember the reef tank the wedding cake was on. :bigsmile:

Thats awesome! You know you picked a good one to marry when she lets you put a reef tank under her wedding cake! Congrats man!

Brian congrats on the wedding!! Talk about a unique and one of a kind wedding cake! Looks amazing. I second Fragjunky's comment lol

Very cool and unique cake! Great way to think outside of the box. I bet you will never see anything like that on Cake Boss, or whatever that show is. Congrats on the wedding and best wishes for a long and happy life together. Oh yeah, enjoy your new wife too!! Lol

What a fantastic idea and a job well done! Congrats!

That has to be the best wedding cake ive ever seen bro congrats!

Wow! What an awesome idea. Brian nice job, and Scrubjay congrates on the wedding. Hopefully none of the cake fell into the tank when you all were cutting it up LOL!


Wy Renegade said:
Wow! What an awesome idea. Brian nice job, and Scrubjay congrates on the wedding. Hopefully none of the cake fell into the tank when you all were cutting it up LOL!
Click to expand...


No, we actually had a piece of raised acrylic that worked as a cake platform to allow the caterers to remove the cake for cutting up purposes (which was part of the program all along as the different layers were different types of cake.) So after the bride and groom did the first cutting and sharing, caterers removed the cake and then portioned it out and served to everyone. cake was amazingly tasty (not sure who made it, but they did good work!) Some of the sugar did fall through but not enough to be any issue- suppose maybe it helped fuel some of the bacteria for the day :tongue:
B

Congrats Scubajay! That is the coolest wedding cake I have ever seen! Maybe I can get my husband to get a cake like that for our anniversary, or maybe just another tank :tongue:

First off, congrats to ScubaJay! When we didn't hear anything more about this, I thought the project never took flight, but it looks amazing! If only I could go back and get a cool wedding cake like this...
Z