Jason, it's all well here with a couple of caveats.
Last night after we watched some inane show on TV my wife and I got off the couch and started to go to bed.
My wife started to fall, as she falls a lot and I turned to grab her.
So we both fell.
We are laying on the floor and we started to laugh.
This old stuff is really starting to get old. But if you can laugh about it, it is fine.

I think I am going to have to get her a walker. MS is not a fun disease.

At least you both still have your sense of humor. Laughter helps a lot.
Give Dale a big hug.
J

Like Rybren said, at least you can find humor in it. So if there's a silver lining, that would be it. Agreed about MS, horrible disease. My aunt was a dancer, now she has trouble getting around as your wife does. I'm sure your wife takes extreme comfort in knowing you're always right there for whatever she needs.
OP

I try to be, but unfortunately, I am not always there to catch her.

@Paul B I'm sure it's been asked a thousand times in this thread, but where are some places online to buy live white or black worms? Even if it's not a starting culture amount, I want to at least try some out and see how our fish like them. Just not sure where are safe/reputable places online that sell them.

I just Googled White Worms and got dozens of places. Even Amazon. https://www.amazon.com/s?k=worm+cul...v=c&hvqmt=p&tag=mh0b-20&ref=pd_sl_wi6hteypo_p

Thats how I got mine. As for safe, I don't know. Why wouldn't they be safe? They are in dirt, not likely to transmit any disease if thats what you are afraid of.
OP

My wife and I just got home from the Doctor. It's a good thing we are having a pretty huge storm here now because a bunch of people cancelled their Dr. appointment and we were able to get in.
We are friends with her Neurologist from our last neighborhood and he happens to be best friends with her neurologist here.

He called me last night and told me to bring her in which is great because normally you have to make an appointment 6 weeks in advance.
She saw the acupuncturist. (I don't believe in that Voodoo stuff like quarantine and acupuncture but it seems to work on her so what the heck?)

Then the Pain Management Doctor, who just happens to be a Supermodel came in and gave her a shot in her face. Not a pleasant feeling I am sure but it worked. The shot went into her trigeminal nerve and it is lanacaine and cortisone probably with some copper. It is temporary but may last a few weeks so we are very happy about that.

Then her Neurologist came in and checked her out. So three Doctors for the price of one.

It's like those Doctor shows on TV where the patient has a weird disease where they are scratching and exhibiting symptoms like ich or Velvet but their insurance won't cover Prizapro, Methothysolize or Calimine Lotion and all three of the best surgeons in the State are examining her.

Then they put her in the MRI machine, and because she has a paper clip stuck in her knee sock, the hospital goes on fire so they get the First Responders involved and it becomes a spin off series that lasts 8 years and some of the retired actors from "Star Trek" are able to be in it.

Anyway, while I was waiting for her I realize there is an LFS two blocks away. I go there and their prices are exorbitant, like you people pay in Florida.
I saw they had Sunburst anthius that used to be $60.00 and now they want $100.00 for. I get them down the road for $30.00 when they get them.

I also saw they had two moorish Idols. Both of them were covered in ich which is actually a good thing and I sometimes look for new ich parasites that will boost the immunity of my fish. But they also wanted $100.00 for them. I was born at night but not last night so I won't pay $100.00 for a $35.00 fish. I am not senile yet.

I want to get one to see if it eats my sponge that is taking over my tank like "the Blob." Movie, 1958, Google it. 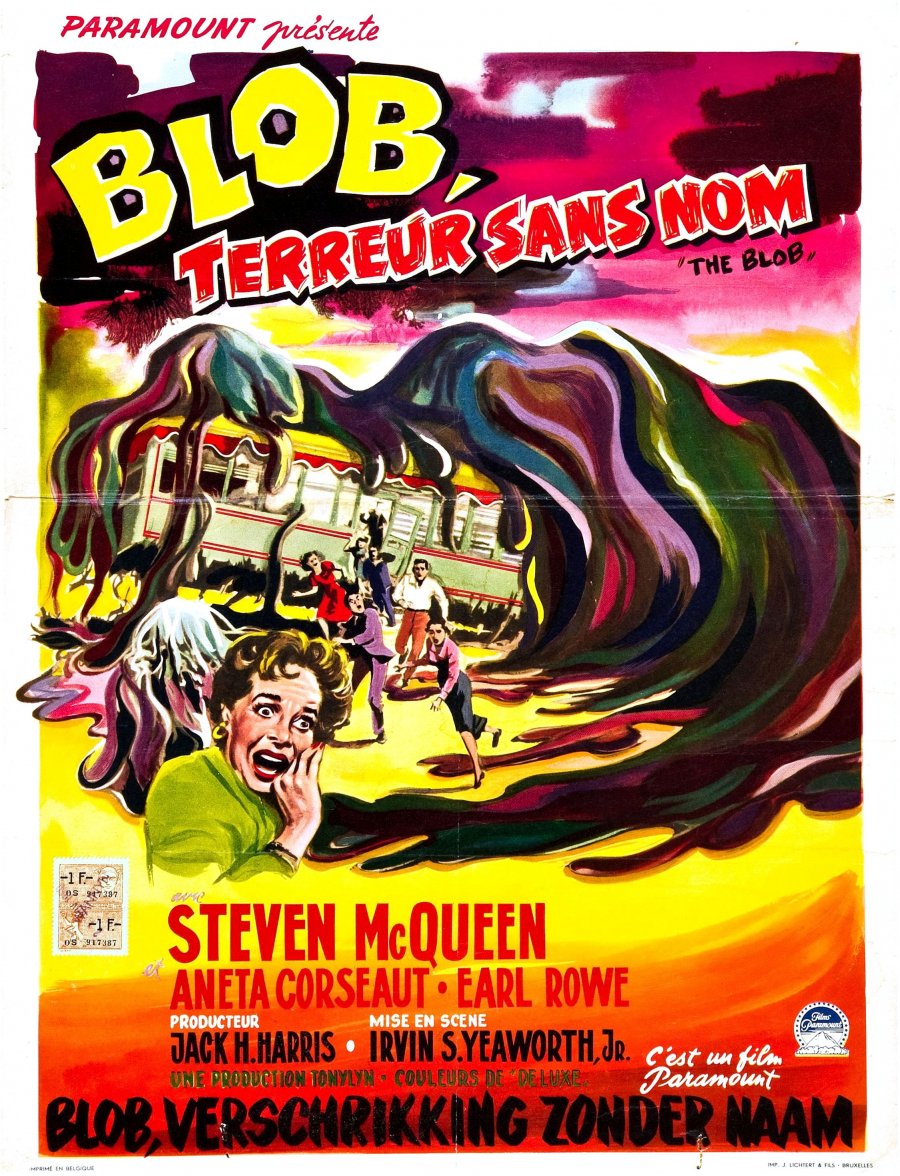 Paul B said:
I just Googled White Worms and got dozens of places. Even Amazon. https://www.amazon.com/s?k=worm+cul...v=c&hvqmt=p&tag=mh0b-20&ref=pd_sl_wi6hteypo_p

Thats how I got mine. As for safe, I don't know. Why wouldn't they be safe? They are in dirt, not likely to transmit any disease if thats what you are afraid of.
Click to expand...

Hope all is well with y'all!
OP

I don't know about the sellers. They are all about $15.00 so pretty cheap. I have heard of them coming dead because it was hot. Mine were not packed in anything insulated so you need to order them when it is cool.
J

Paul B said:
I don't know about the sellers. They are all about $15.00 so pretty cheap. I have heard of them coming dead because it was hot. Mine were not packed in anything insulated so you need to order them when it is cool.
Click to expand...

Yes I do. Whiteworms live for five days in salt water and black worms live about five seconds.

I don't know about the nutrition or either type but I like the fact that they have living bacteria in their gut.

I so enjoy reading your thread and following along. I don't always agree with your suggestions but quite frankly there is such a humble sense of honesty plus your many years of tried and true experience. Although you take a no nonsense approach, you are so wonderfully disarming and charming.

Additionally we share some attributes, I am old and I also appreciate super models. Continue sharing. Best regards, your fellow reefer, Mark
OP

Mark, nice to meet a fellow Geezer. Especiallyone who appreciates Supermodels. I was going for charming so I guess I nailed it. Of course many people on here just can't wait for me to croak. But being old, they may not have to wait long. But my Mom died at 99 so i may be around a while yet just to annoy those people.

Bridget Bardot when she as young was my favorite. 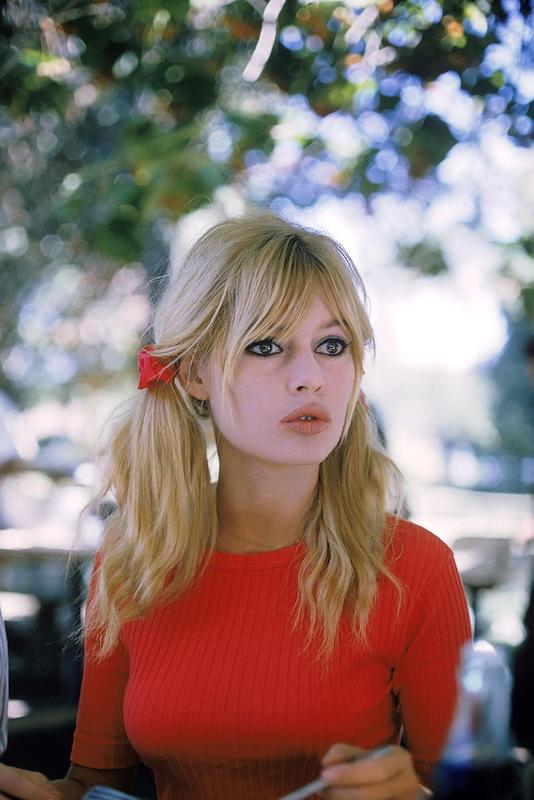 Now, at my age I have been looking at Supreme Court Judge Ruth Ginsburg.

Big storm here and my lights are blinking so I may end this in the middle of a word.
I have my generator all gassed up and ready. My fish are comfortable knowing I have them covered. They actually like blackouts and have been through quite a few of them. It is exciting.

They get bored swimming around the same 6' tank day in and day out. I mean how many times can you say hello to an anemone? 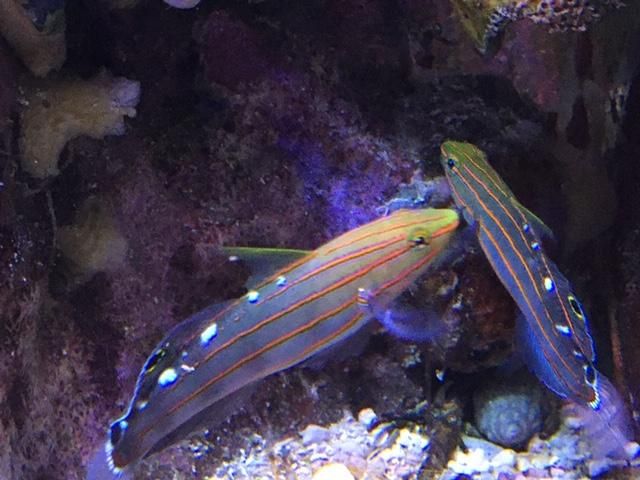 We are getting this now, it makes drinking Grand Marnier on my deck Interesting.

I need heavy prunning in my tank. My sponge is very happy but it is taking over and I don't have the time to keep trimming it. The stuff is like heavy leather and sticks to the rocks. Nasty stuff but I like the way it looks.
Thats what this guy is sitting in. 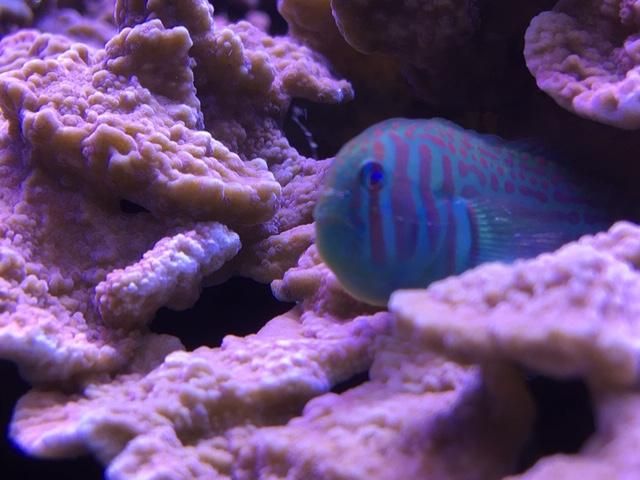 Some of my sponge seems to be dying and disappearing which is fine. I have way to much. Maybe it didn't like when my salinity went way down or as I just checked, my calcium is very low.
Interesting. 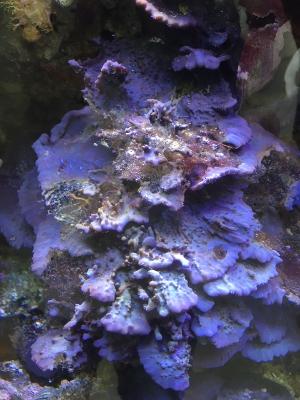 I like the look of your sponges as well... too bad it's trying to take over the entire tank.
OP

How did you survive your first year of reefing?
2

Razor caulerpa, apparently you are immune to death. (funny)