This project has been in the works for a while but kind of got mothballed due to other projects I needed to wrap up first. I ordered the tank back in March and after Estes not informing me they were delivering the tank I sent the tank back to the depot on the truck and ended up picking it up myself. 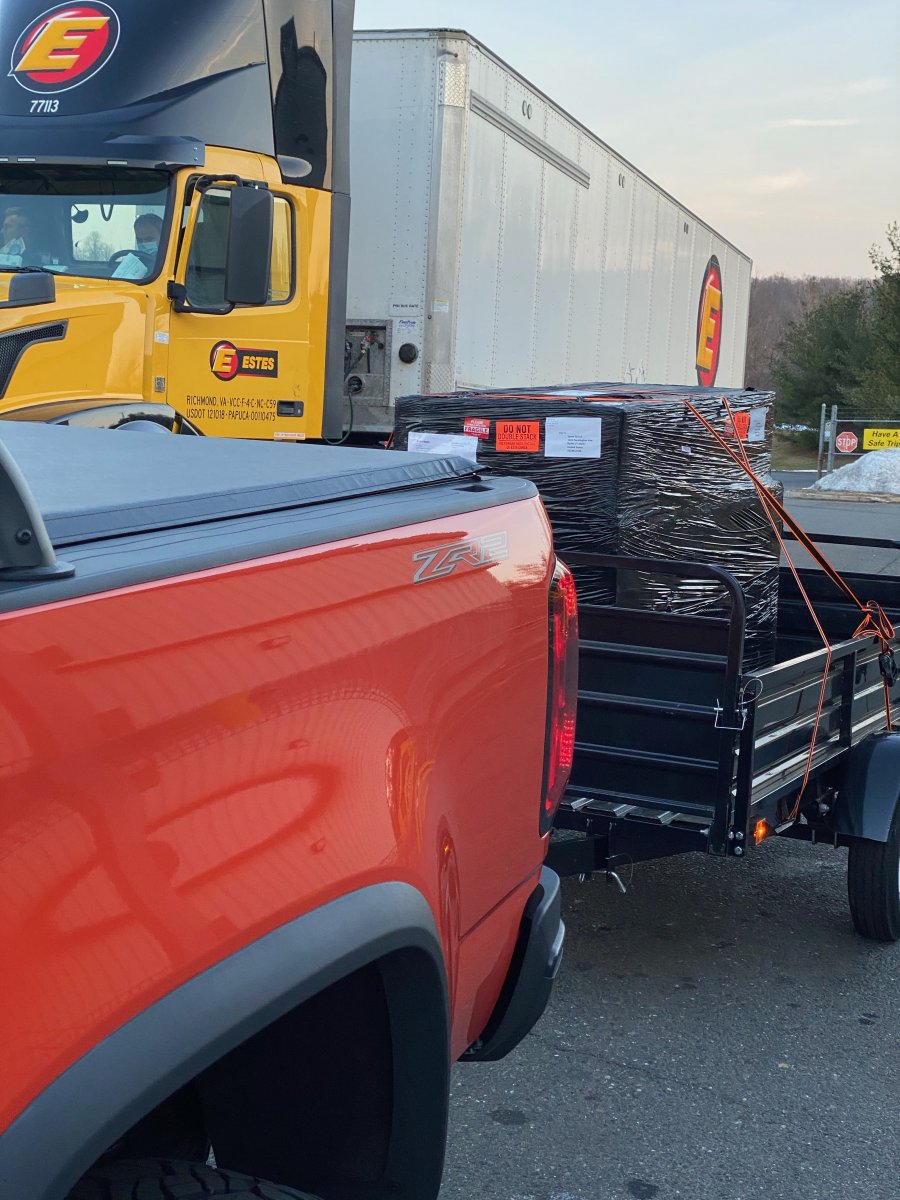 There it sat, in the trailer since the end of March. I finally got time to kick everything off and got the stand inside, assembled and leveled. Easier said than done because of how uneven the floor is in the basement but I got it done. 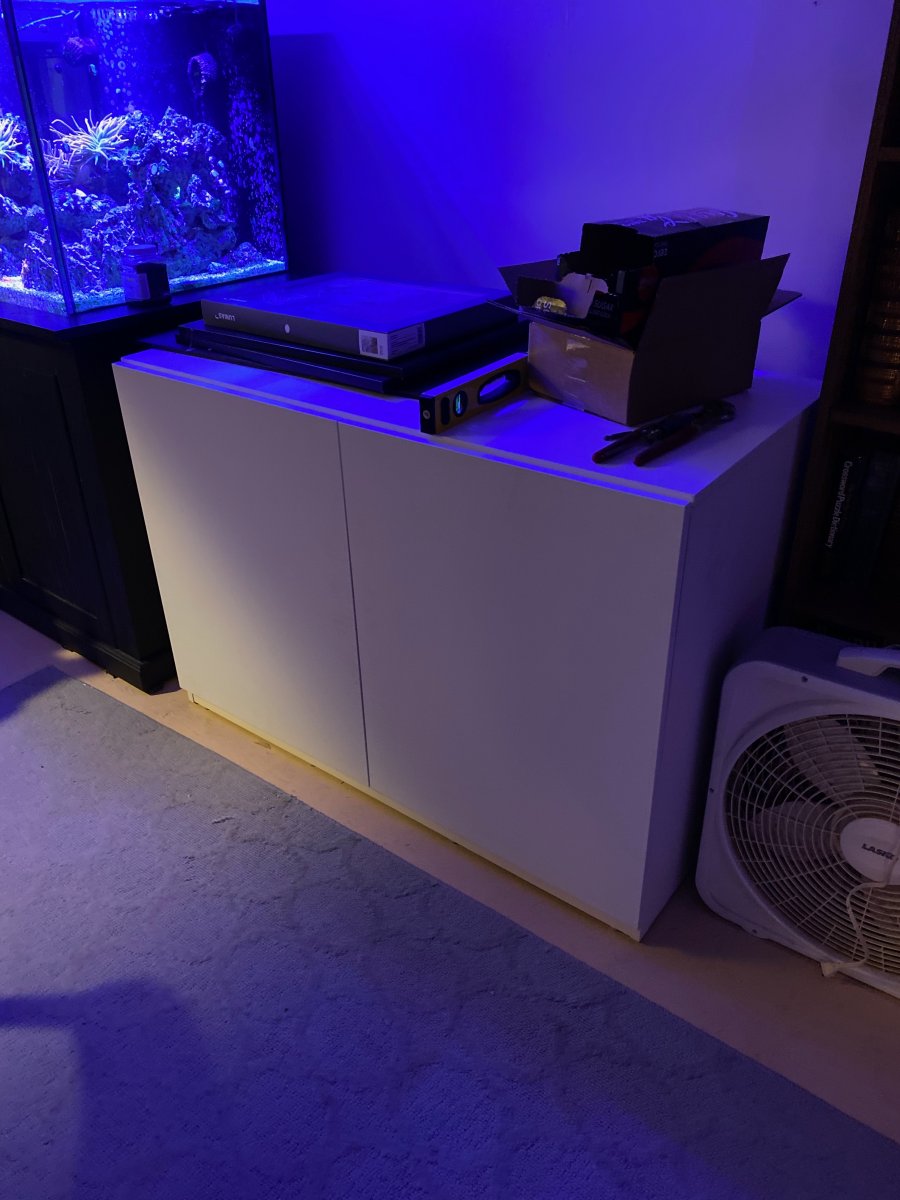 Next step was getting the tank in here. After failed attempts at coordinating help to move the tank in I ended up hiring one of the LFS to come and do it for me. The peace of mind and not aggravating my rotator cuff injury was worth the price I paid. Tank inside, now the real fun begins. 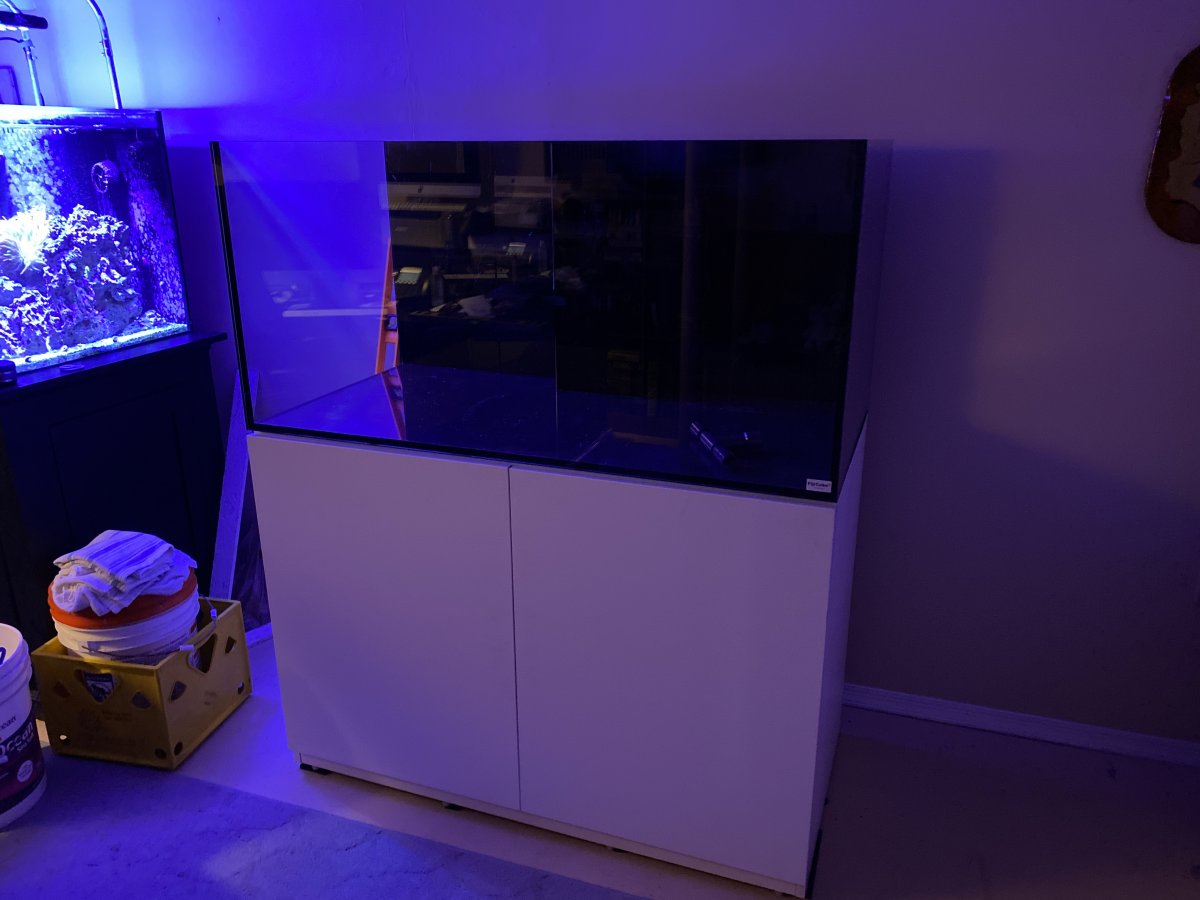 For lighting on this tank I went with 3 Radion Pro G5's. Probably going to order the diffusers for them since even at 40% power they light up the whole room. I'll circle back to that once the tank is filled up and see how bad it is. Loving the lights though. 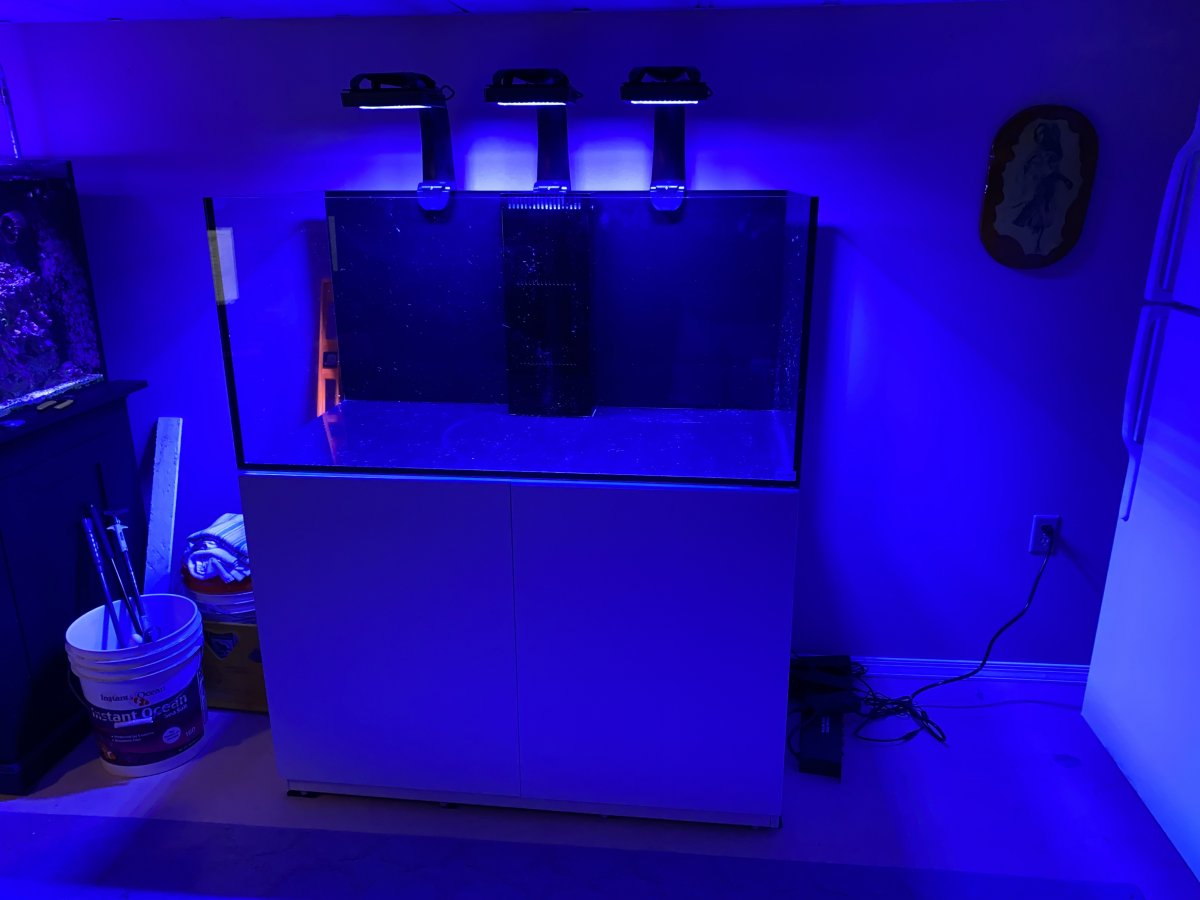 Work under the stand is progressing. DJ strip and sump LED lighting installed, sump plumbed and ready for the leak test: 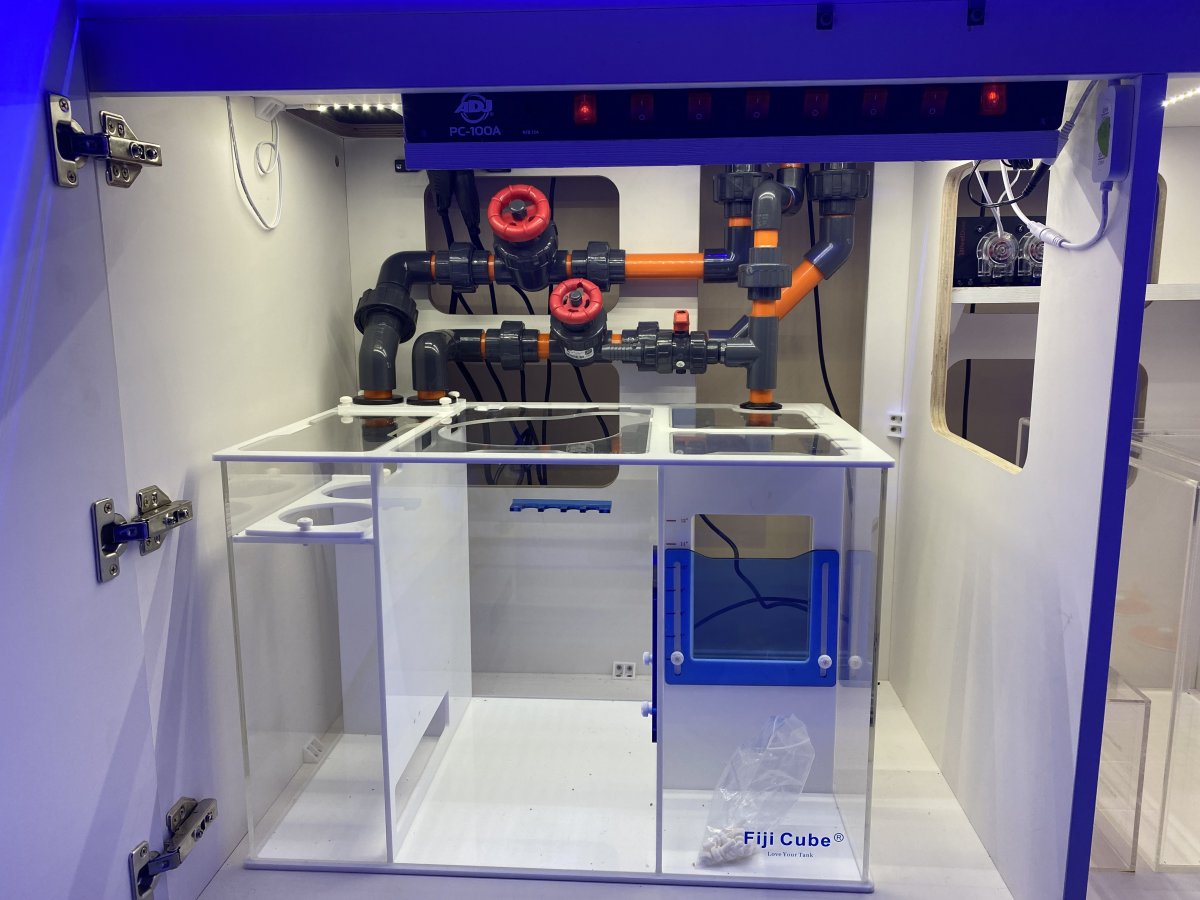 ATO container used is a Trigger Systems 10g as opposed to the glass 9g that came with the tank. The glass tank has a one piece lid which would be a hassle to fill up because of disturbing the lines to the pump etc. Dosing container I picked up on Amazon... 3 compartments that hold 1500ml each. Red Sea doser sitting on the shelf I made for it. 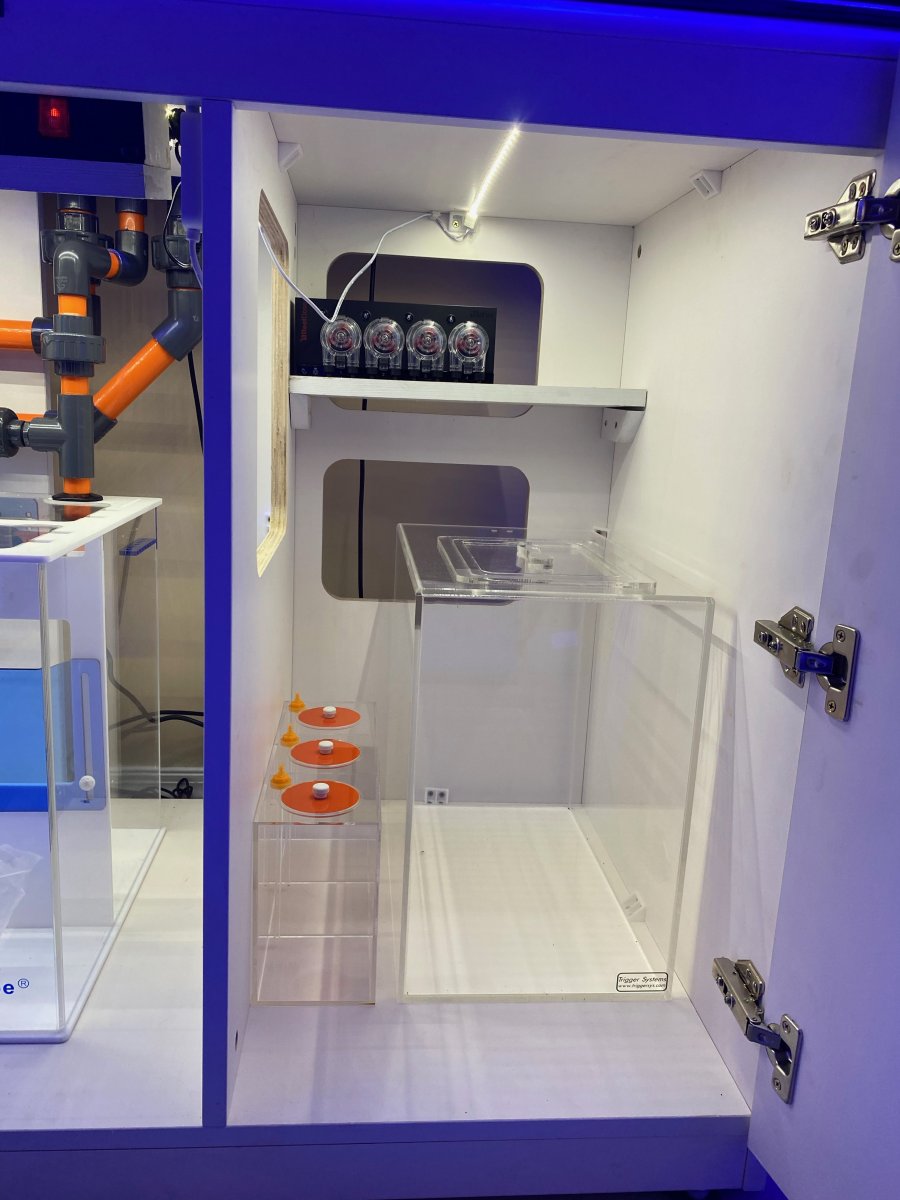 Still have a bunch to do but we're off and running.

To do:
I still need to get over and pick up salt and another bag of live sand. Possibly more rocks as well... deciding on whether I want to keep the 60 cube running or to move the contents over to the new setup.

heck yeah I have there 18.5 nano peninsula ( now the the 20 ) along with a large peninsula cool little tank. I have been looking at there 81ext and 108 for a while now.

i'll fallow along so keep the updates coming!
OP

Devaji said:
heck yeah I have there 18.5 nano peninsula ( now the the 20 ) along with a large peninsula cool little tank. I have been looking at there 81ext and 108 for a while now.

i'll fallow along so keep the updates coming!
Click to expand...

I went with the 108 with the internal overflow because I like the design. It has intakes at 3 different levels which is something I wanted. 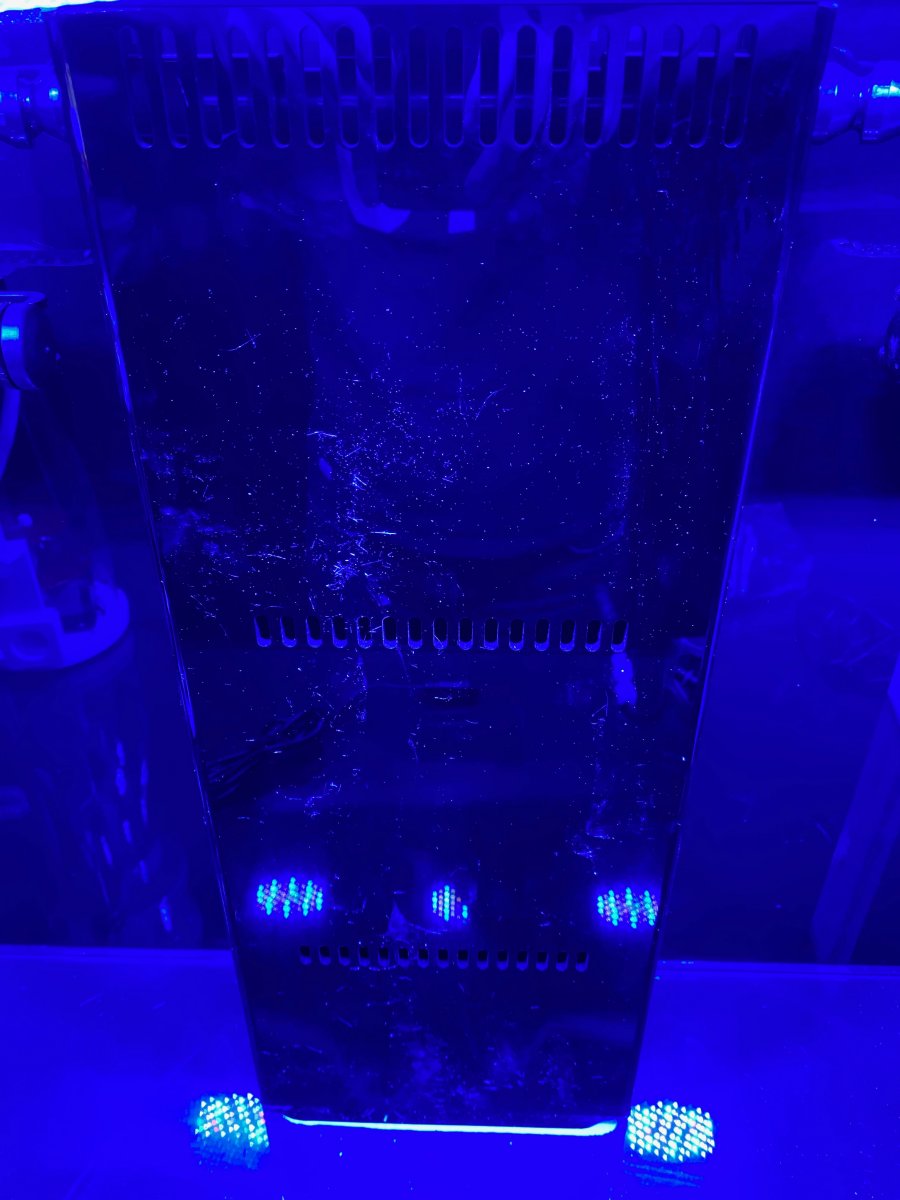 Main heater in. Skimmer stand and skimmer in: 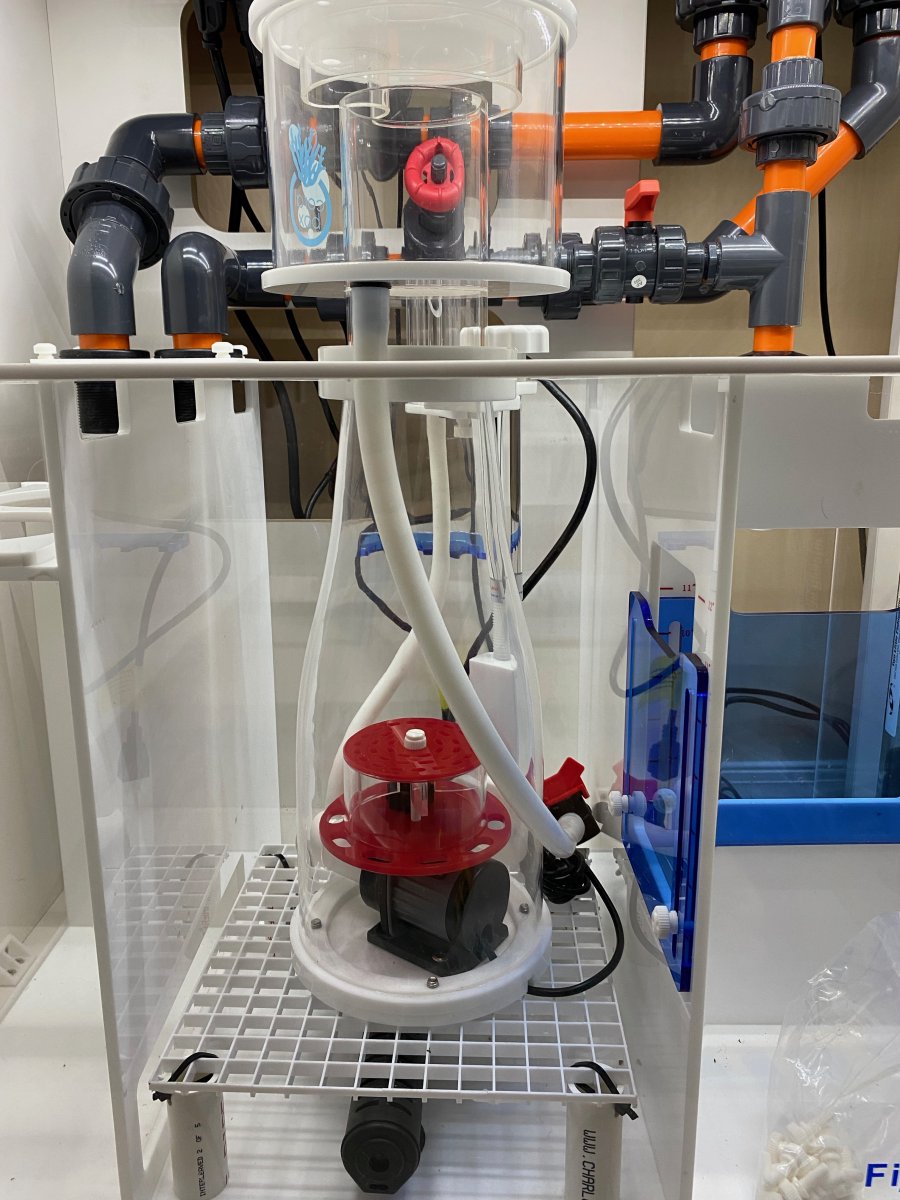 I think it was wise that you didn't take a surprise delivery if you didn't feel optimally-ready. Obviously you have great patience, which is showing in your whole project so far.

JumboShrimp said:
I think it was wise that you didn't take a surprise delivery if you didn't feel optimally-ready. Obviously you have great patience, which is showing in your whole project so far.
Click to expand...

Oh patience is everything in this hobby. Talk about patience... the tank sat out in my trailer for like 5 months before I got it in the house.

As for the delivery, I have a truck and trailer luckily. If not they would have dropped a 550lb crate in my driveway to deal with. They were supposed to hold the crate at the terminal and contact me. The freight terminal is only 5-10 minutes from my house.

Next up is fabricating the screen top. I'm waiting on a shipment for wire management stuff as well as a larger return pump and ATO gear. The UV I'm pulling off of the 60g cube and moving over. It's over-sized for that tank and if I keep the 60 running I can just grab a smaller unit and pop it in there.

Thank you. If anyone is wondering about the quality of the Fiji Cube tanks, don't... they're amazing quality and less money than Waterbox or Red Sea. Stand is great. Sump is great. Tank is outstanding.

BRS has Excellent DIY feeding ports, if you are going with screen mesh.
OP

JumboShrimp said:
BRS has Excellent DIY feeding ports, if you are going with screen mesh.
Click to expand...

I use these ones. Not sure if these are the ones you're talking about. I have one on the frag tank and it's been perfect. 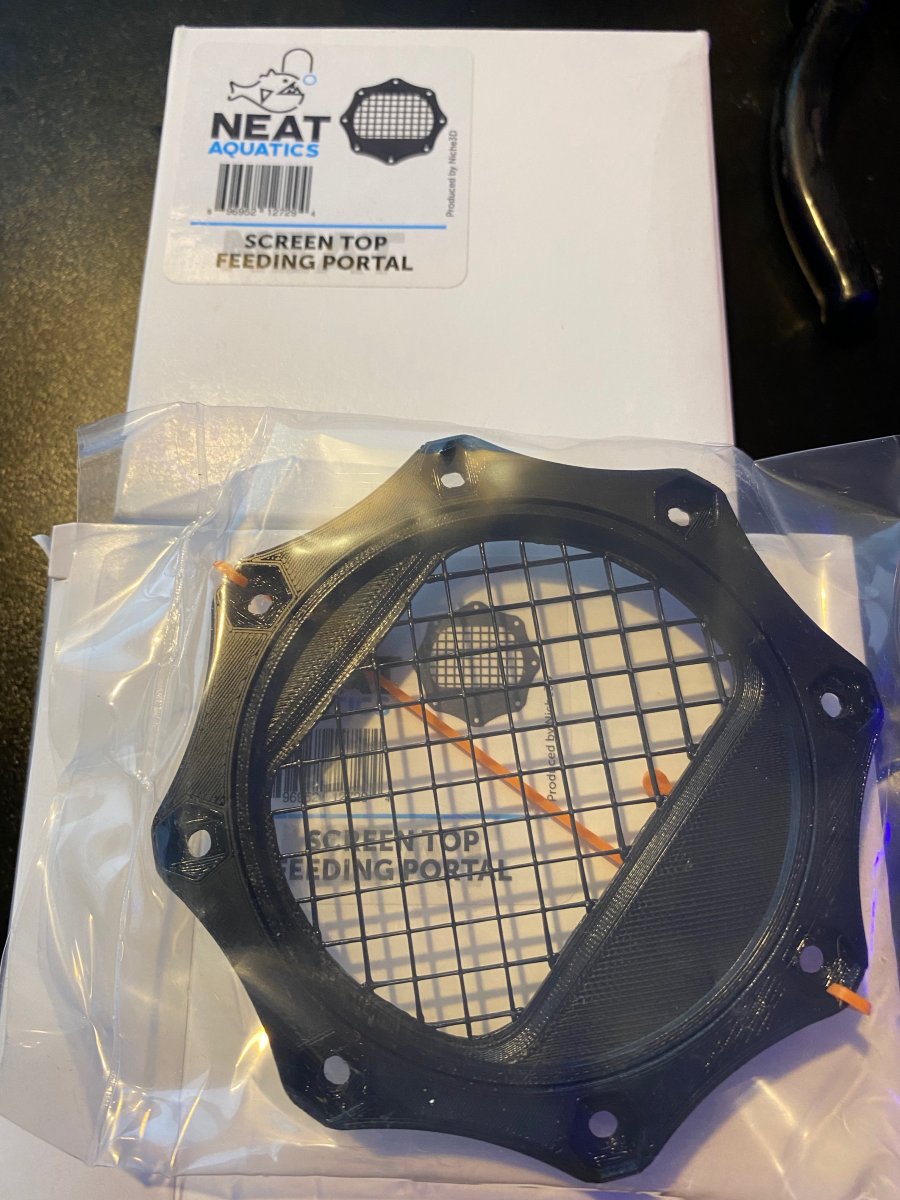 Yes— those. Top notch. I only cut a hole in the screen about the size of a postage stamp for maximum longterm stability.
OP

JumboShrimp said:
Yes— those. Top notch. I only cut a hole in the screen about the size of a postage stamp for maximum longterm stability.
Click to expand...

If you install it correctly and tighten down the screws before cutting the screen nothing moves. The screen top on the frag tank where I use that gets a lot of use and it's just as solid as it was the day I made it.

Nice looking setup! What lights did you go with to light up your sump?
OP

Ghost Reefer said:
Nice looking setup! What lights did you go with to light up your sump?
Click to expand...

I used the same lights I did on my 60 cube stand that I built from scratch. Just some cheap LED's from Amazon:

Thanks for the link!

Some wire management and ATO installed. Return pump comes tomorrow. Once that's in I can start mounting the controllers for the skimmer, return pump, gyres, etc... Then I need to calibrate the dose and run those lines. Getting there inch by inch...

Amazing how much work it is to setup a new tank the right way. And there's NEVER enough room. 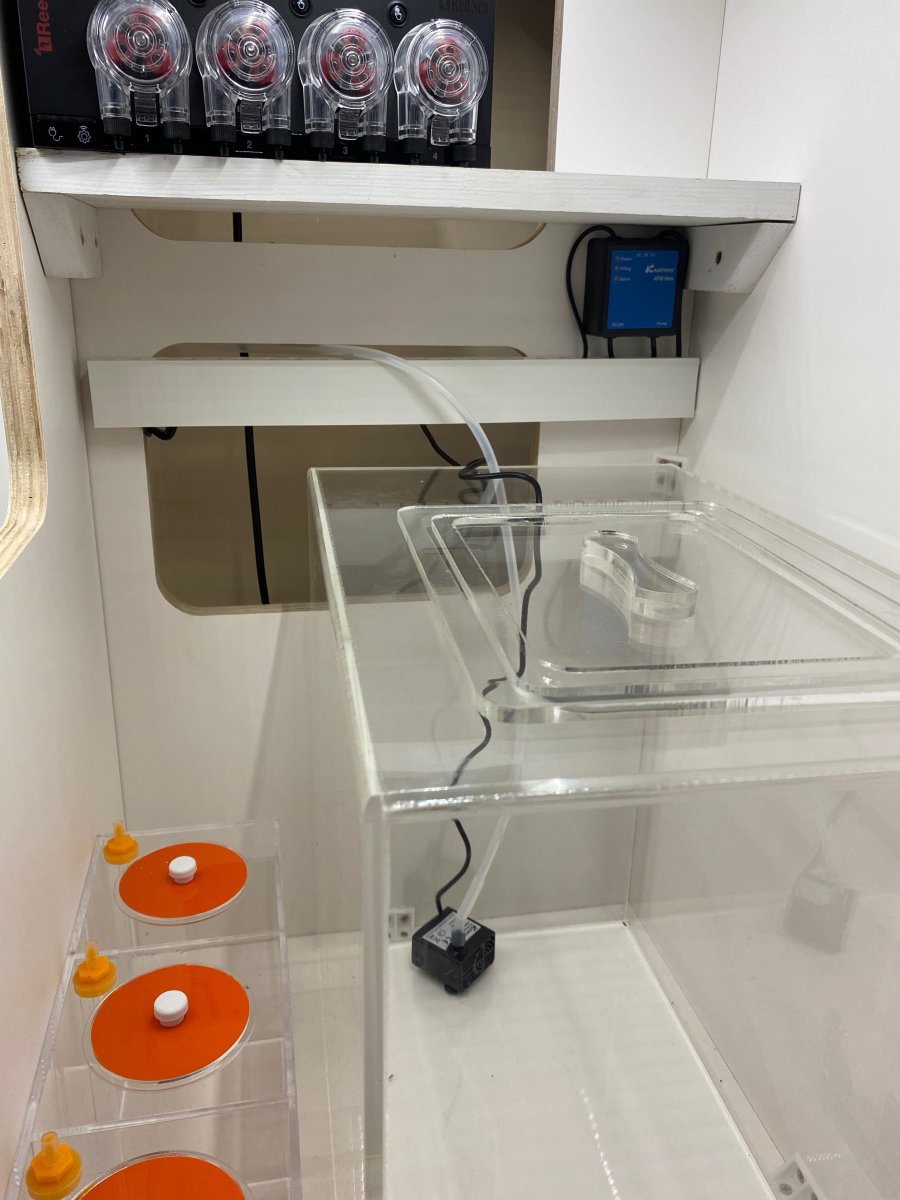 Rolling along... got more stuff from BRS and Mr. Bezos delivered.

Heater and skimmer controllers are mounted and wired in: 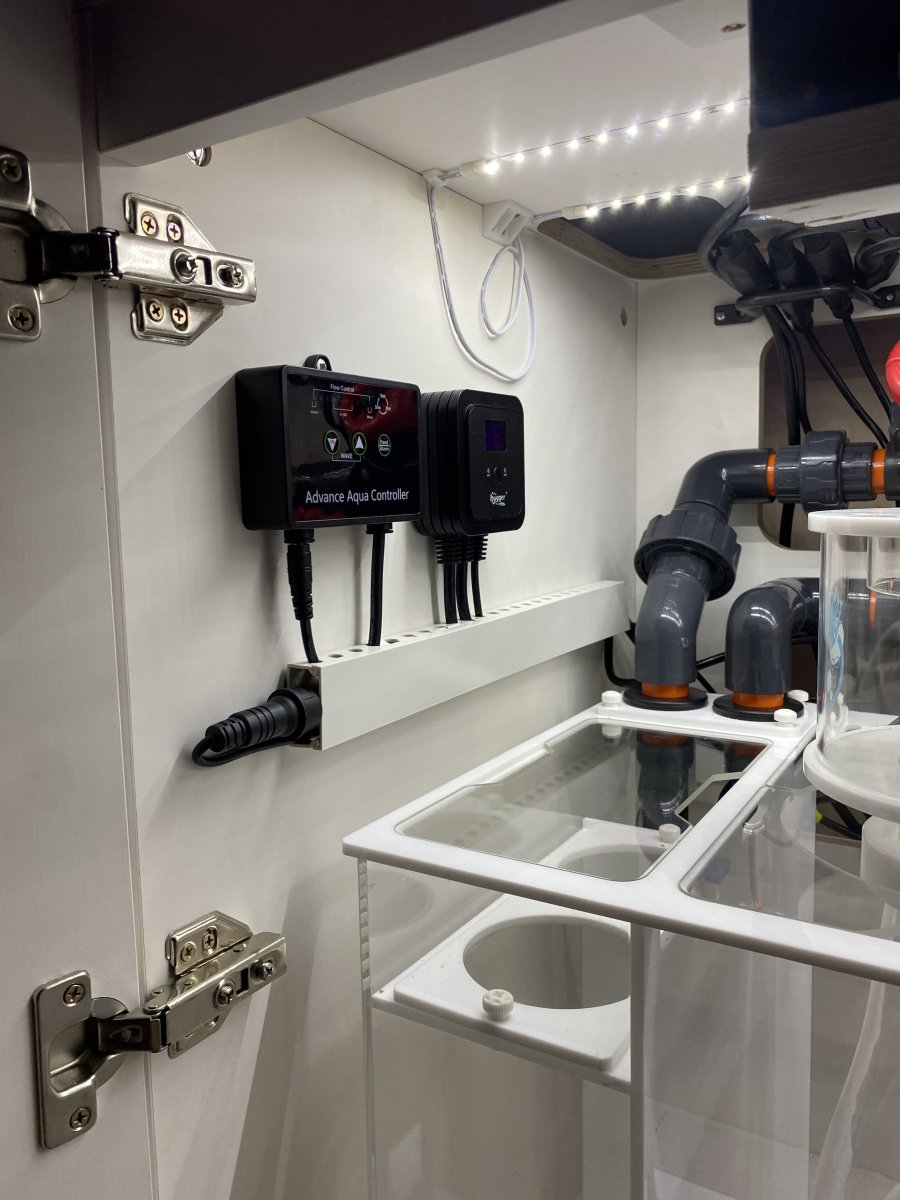 Controllers for the gyres and return pump mounted and wired. Also installed the return pump and tied it in. 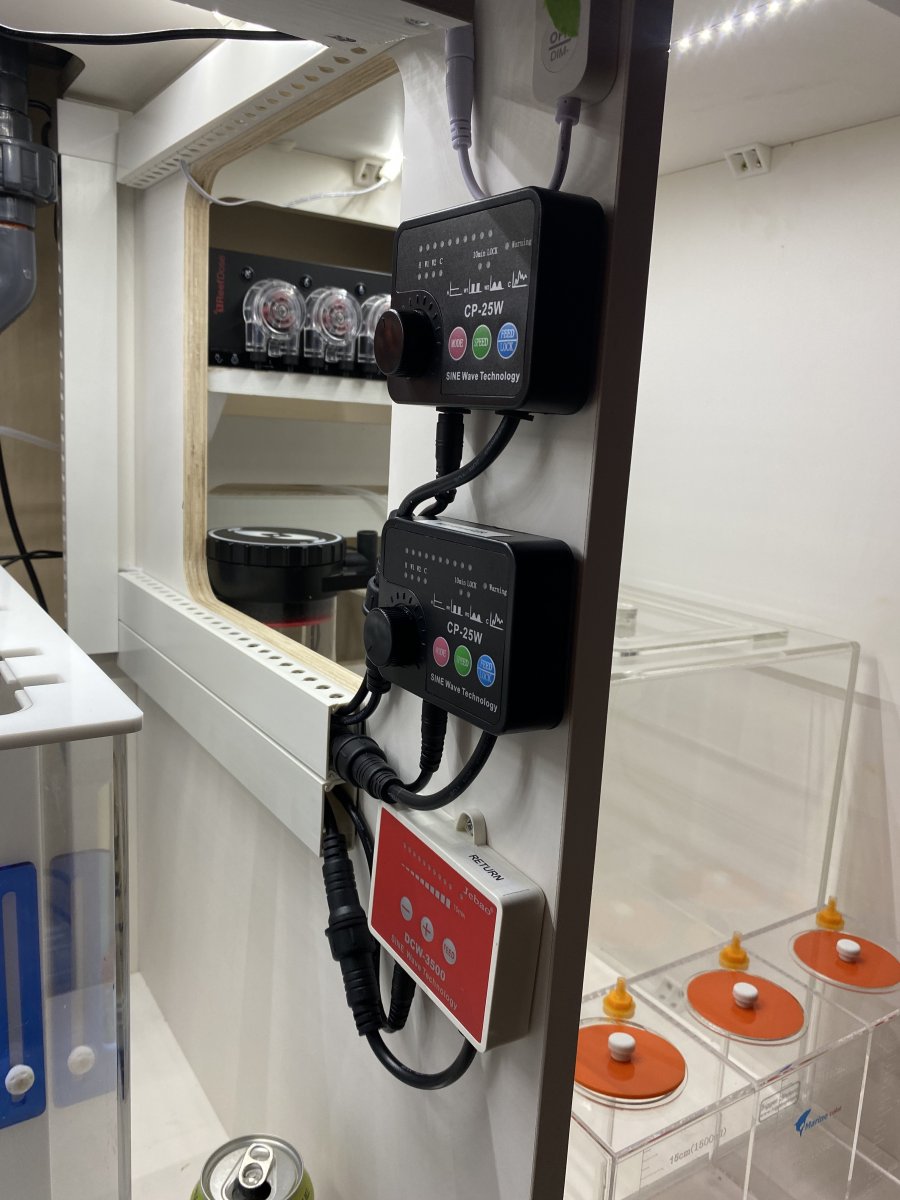 Rearranged the right side of the stand to make room for the CO2 scrubber and allow easier access to the dosing containers. 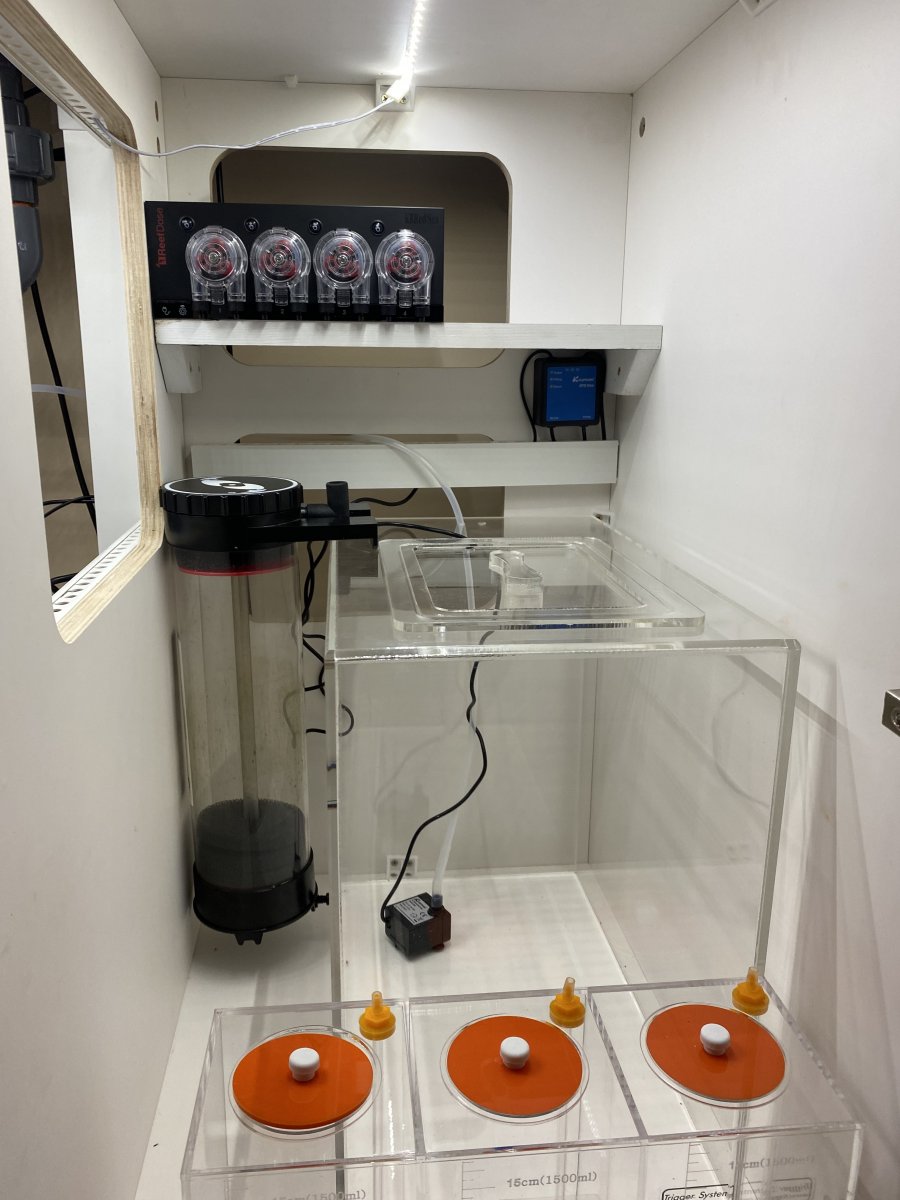 Label your stuff people! I do it as I go before I forget and have to crawl halfway under the stand to see what's plugged into which outlets. 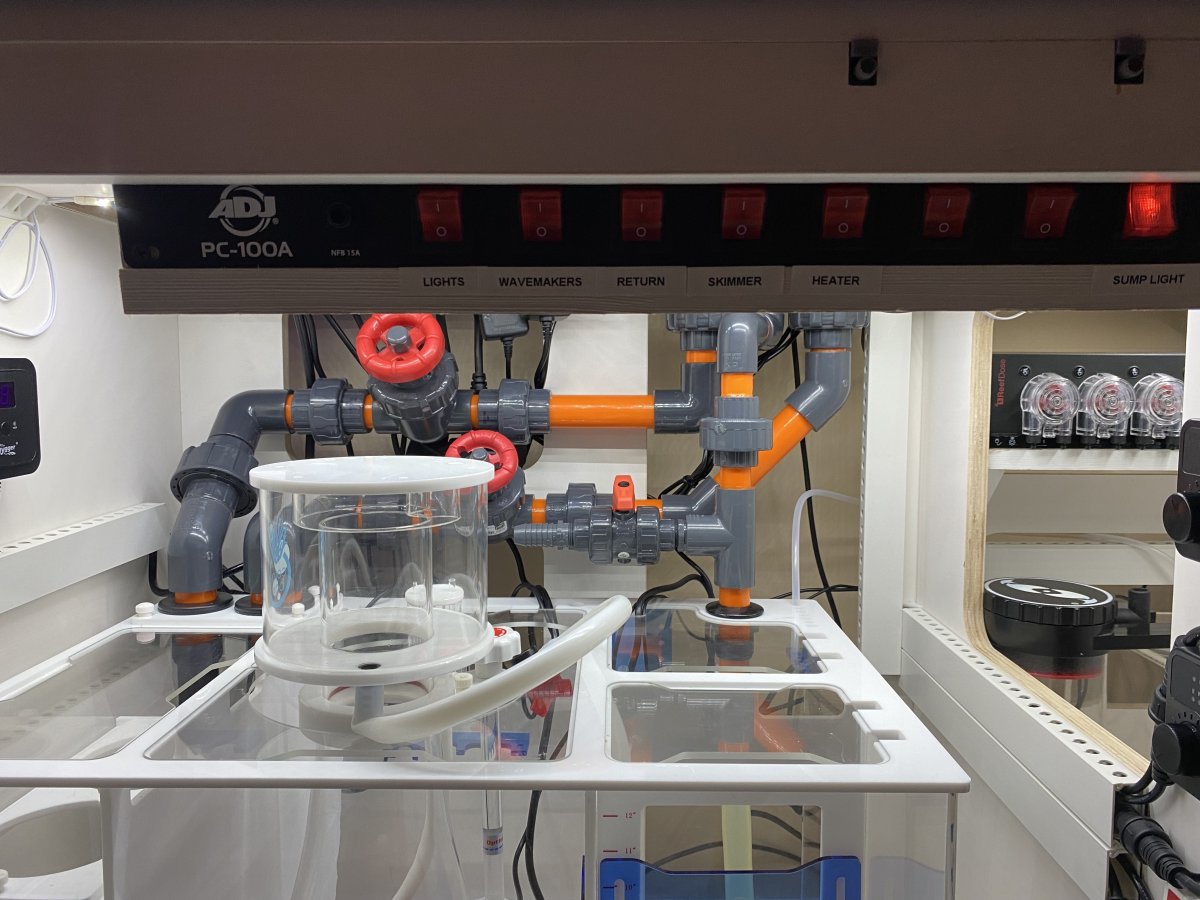 Now I'm just waiting for the other 2 head doser to arrive. 4 head doser will dose Alk, Ca, Mg of course. Head #4 will dose RODI from he ATO tank into the CO2 scrubber. The 2 head coming will dose aminos and coral food.

Need to go pick up another bag of sand so I don't have to deal with the year old sand in the 60g cube. I'm going to leave that intact with a few of the rocks. Moving the rest of the rocks over to the new tank plus what I have cooking out in the brute in the other room.

We're almost ready to get wet. I'm going to fill the overflow with water tomorrow and test the plumbing for leaks. Pray for me people... I REALLY don't want to have to redo plumbing!

Nice! Way above my commitment level to this hobby but I like it!
OP

EricR said:
Nice! Way above my commitment level to this hobby but I like it!
Click to expand...

Normally I don't go all out. I mean I did build a kickass stand for the 60 cube prior to this tank but the plumbing etc all came from Home Depot. I figured for the money I spent I should do this tank some justice.