Hi all, I had been looking for feedback about this trap before I bought it and couldn't find a lot so I thought I'd share my experience.

I was a little hesitant to pull the trigger because I heard they were only shipping prototypes. Upon placing my order I contacted their support team to ensure everything would be as described on the site. They responded very quickly and were upfront about all the traps currently being made by hand. They told me they were working to get a mass produced model soon. If I'm honest that did raise some red flags for me, but I was hunting some real ******* fish that had thus far eluded me for some time so I was willing to roll the dice.

When my order arrived it was nicely packed with some instructions included. Everything looked very clean and well put together. If you examined it closely you could see some signs that it was put together by hand, but nothing that would put you off. All the seals looked very tight, and the fittings were solid as well. I went with the 8" model even though I was after 2 chromis because I was hoping I could use it for later. I put the trap in the tank that evening with plans to give it a day and to try and catch one of them the following day.

The next day when I came down for some coffee I was just checking on the tank and I noticed one of the chromis had just swam into the trap, he was just sitting there! When I moved for the release plunger I must have spooked him because he tried to swim away. This is where the genius of the trap comes in. We've all seen Finding Nemo, when fish get scared they swim down. In my old traditional sliding door trap the fish would swim down, hit the bottom, and then swim against the bottom until they pushed themselves out of the trap. You only had about 2-3 seconds to close the door. However with the bubble trap because the trap is round when they swim down it's into a concave. So they'll just slide up and down trying to push through. I must have spent 10 whole seconds before I fumbled to the release bulb. Which I know doesn't seem like a lot of time, but with a thrashing fish it is! He never even got close to the opening, he was still swimming down when I released it. Huzzah!

I reset the trap high on my success and waited for the tank to settle down so I could try again in the evening when I fed them. This time they were having no part of it, no one was near the trap they even barely came out for food. I waited until the next day (today) since it was Saturday and I spent all day monitoring the trap. It seems you get one real good shot with each fish. I had 3 of my other fish swim into the trap, again no bait, they just obliviously swam into the trap and freaked out once they realized they couldn't escape. Not joking aside from my angel, the other two were pinballing around in the open trap for MINUTES! I even thought at one point I'd have to help them get out, I could have caught them SO easy! Most comical of all was my blenny.. he went and sat in it like a cat in a box. He just looked at me as if to say "You wish". LOL! 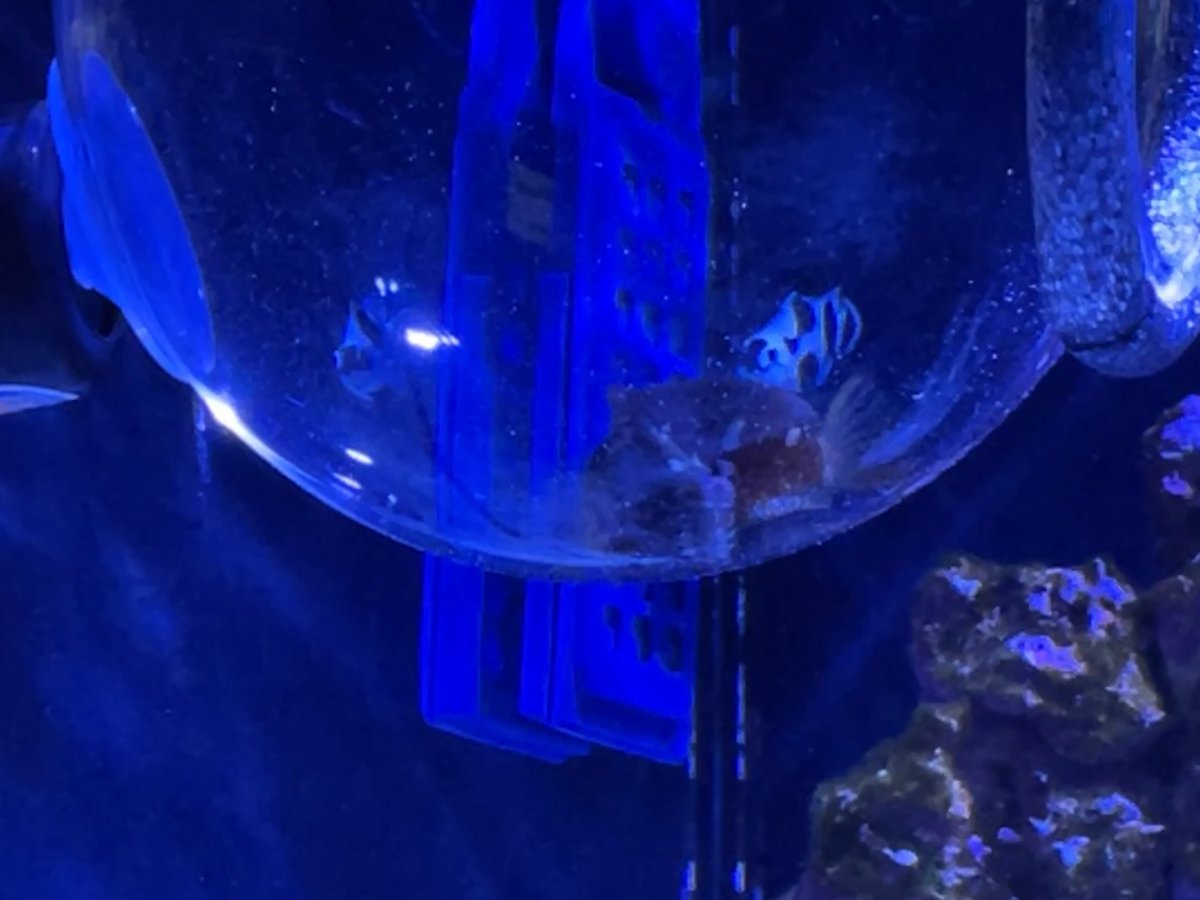 Anyway, I tried at lunch and sprinkled some flakes in there, but again the ones who had been in the trap were now freaked and were suspicious. I bided my time and tried again this evening, this time with a blend of frozen foods. The other chromis was such an aggressive eater he couldn't help himself! It didn't work initially when I baited the trap, but after I fed, I waited the 15 minutes and when my powerheads came back on and the siren sway of the food in the trap was too much for him to resist. GOTTEM! Two fish in less than 48 hours!

I wish I had taken more pics and vid but in the moment it's quite nerve wracking actually, watching and waiting to spring the trap. All and all I'd say this thing is amazing! I would have paid double to get these to jerks out of my tank. There's only two things I'd note. First being as I said before a lot of the fish just swam into the trap haphazardly, with no bait in it. So set the trap up on a day where you can sit with the tank. Something about the shape, a lot of fish will just wander in, but once they've freaked out and they experience they can't get out it will sour them.

OH I forgot to mention! Actually I would have caught the second chromis on the FIRST day if I would have done this. I was at the store and the second chromis wandered into the trap. My wife called/texted me and I missed it. I called her back, it must have been 5 minutes later, the fish was STILL in the trap. I tried to talk her through what to do but he did eventually get out before I could explain it to her. Both on the same day would have been amazing!

I know this is going long, but I'm just so excited to share as I really didn't expect it to work this well. Let me wrap it up with my second point. I think this trap is fantastic for your bold and curious fish. However I have a pair of baby clowns and a skittish yellow tang, none of them went anywhere near the trap, empty, food or no food. Who's to say if with more time maybe they would have warmed up to it, but I didn't want to stress them all out so I removed the trap after catching the second chromis. Just bear in mind if you have a shy fish you may not have the same rapid results. But lets be honest, it's never the shy fish we're trying to evict, it's the a--holes! LOL!

All in all just a great trap. I've not been paid for this review, I just have bought so much snake oil in this hobby and so many products that fail to deliver on their claims. I thought a company like this deserves some free press. I like to support the little guy who has a good idea, and this one is pretty dang great!
Last edited: Jun 19, 2021

Thanks for the review, I found 1 white spot on my wrass yesterday and now I'm already planning the impossible. I Hope this works out .