Very new to reefing and just added a new clown to my tank but I keep noticing there are tiny white specs in the clear portions of its fins. Is this something to be concerned about, ich, brook (please don't let it be). What steps should I take? I only have one clown in my tank along with a blue legged hermit and of course live rock/sand. Any information or help would be appreciated! Thank you! 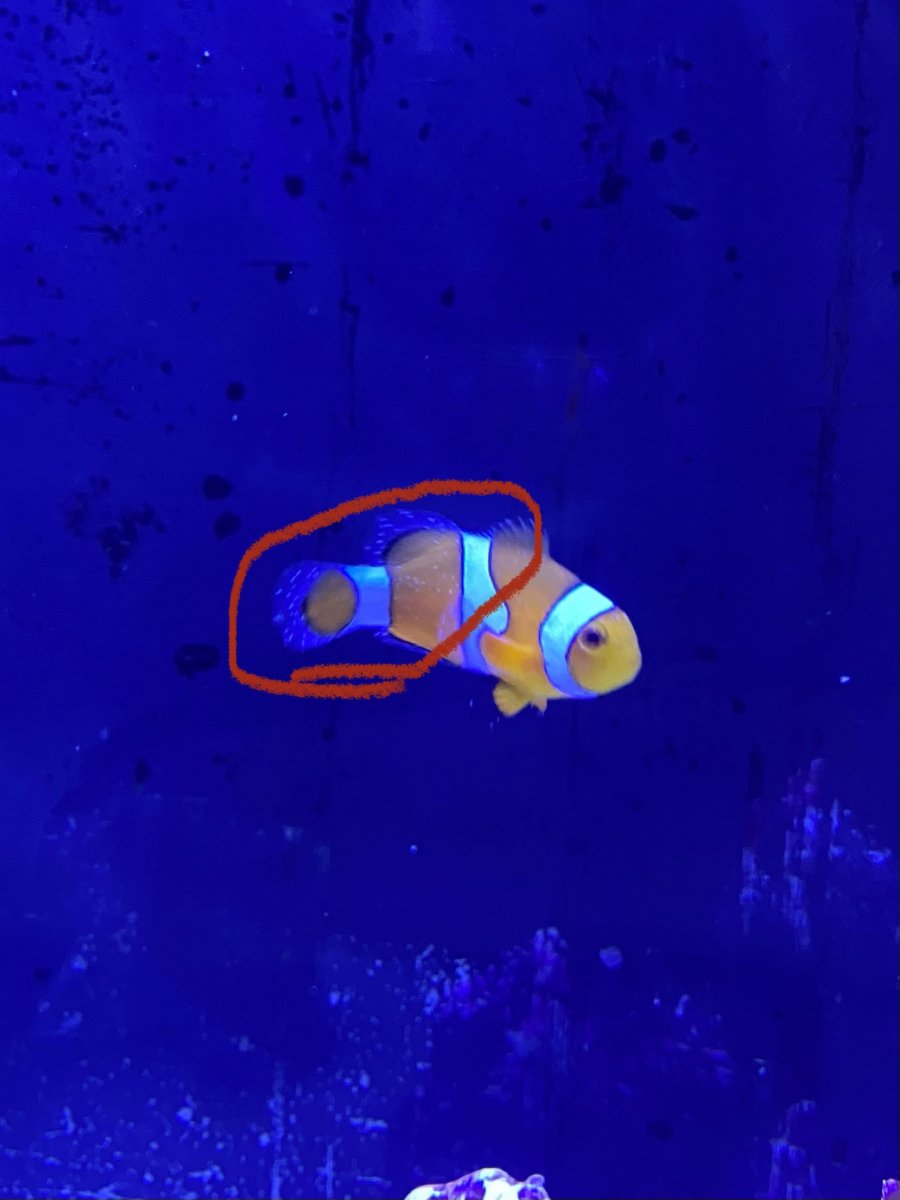 Lets call in the pros @Jay Hemdal @vetteguy53081
I can't tell the difference but I just went through a bad case and lost one of my favorite fish. Actually who am I kidding they are all my favorites but I did actually lose one of my Naso tangs.
These two give great advice and tried to help me constantly. Good luck I feel your pain.
Upvote 0
OP

Thank you so much! Hey even if it is nothing, I wanted to try to at least be proactive about it! Oh no, I'm so sorry for your loss... I never knew how close I would become to a fish.

Looks like ich, I’d rehome the hermit crab and look into hyposalinity treatment if that’s all you have in the tank so far

This is a clear case of brooklynella which is similar symptomatically to Oodinum and is a parasite that primarily attacks the gills first. At the start , you may see this fish scrape up against objects, rapid breathing respiration develops, and fish often gasp for air at the surface as the gills become clogged with mucus. Very quickly the fish will become lethargic, refuses to eat, and its colors start to fade. The most noticeable symptom of Brooklynella is the heavy amount of slime that is produced by a fish that has contracted this parasite. As the disease progresses, a thick whitish mucus covers the body. This will usually start at the head and spread outward across the entire body. Skin lesions appear and it is not uncommon for signs of secondary bacterial infections.
Typical treatment is a standard formalin solution is mixed with either fresh or saltwater in a separate treatment container. Initially, give the fish a quick dip in formalin (quick Cure is a good choice) at a higher concentration, followed by continued treatment in a prolonged bath of formalin at a lower concentration in a quarantine tank (QT). Of course, the longer the fish are exposed to the formalin treatment, the more effective it will be at eliminating this disease. Ruby rally pro started with a 90 min bath is also effective and is reef safe.
If a formalin solution is not available for immediate use, temporary relief may be provided by giving fish a FW bath or dip. Even though this treatment will not cure the disease, it can help to remove some of the parasites, as well as reduce the amount of mucus in the gills to assist with respiration problems.
Treatment is best done in a QT tank.
Upvote 0
OP

Thank you so much for your quick response! I apologize for my ignorance but do I also need to treat my tank? I have live rock and live sand plus a hermit, How will I know my tank won't continue to give new fish the same issue? I can relocate my hermit and treat the tank but I would like to know the easiest and most cost effective way to do so.

Thanks for your help!
Upvote 0

Ran into the same issue on my tank 2 years ago. Basically nuked my tank and killed all my fish. Try your best to treat it based on what everyone said above. Unfortunately if your fish don't make it you'll have to go fishless for a few months to ensure you stall the life cycle of the parasite.
Upvote 0

Very new to reefing and just added a new clown to my tank but I keep noticing there are tiny white specs in the clear portions of its fins. Is this something to be concerned about, ich, brook (please don't let it be). What steps should I take? I only have one clown in my tank along with a blue legged hermit and of course live rock/sand. Any information or help would be appreciated! Thank you!

A short video, or clearer pics taken under whiter light would help, but this looks like ich to me. The hermit crab is going to need to be moved. If you are going to keep corals and other invertebrates later on, you should go with hyposalinity. If you focus will be on fish, you could try copper. Here is a link to my hypo method:

Hyposalinity Jay Hemdal 2021 This term refers to a long-term bath treatment for marine fishes in which the salt content of the water is lowered and held below the point that certain parasites can survive. The salt level reached, and the time of the treatment are the two variables...

High-fin Banded Goby is hurting his fins on the rocks,ho

S
Clownfish resting on substrate, normal or reason for concern !!!