Hey everyone, after 3.5 years with all in one tanks I’m finally migrating. The tank will be an in wall SCA 120. I’ve been in the process of building it for a few weeks now.

First update: tank arrives! I always thought the lead time on a new tank would be a couple months so I went ahead and ordered the tank...well it showed up less than a week later. We were all very excited. 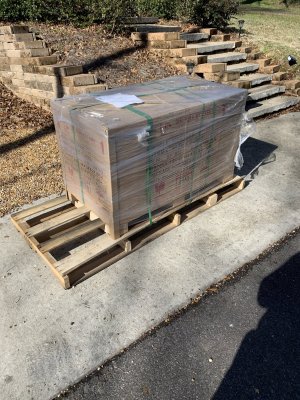 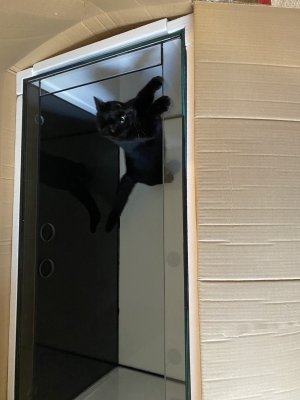 So then the contractor finishes up putting in the hold and building the stand and I foolishly get excited and think I can move it myself. Welp....it fell and cracked. 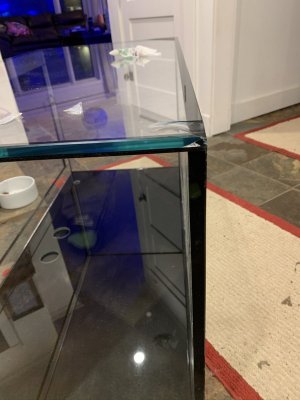 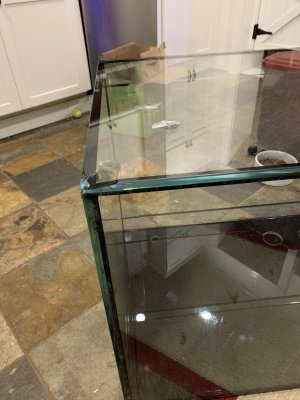 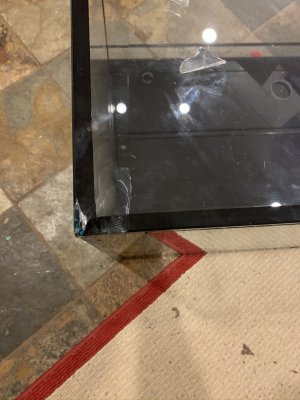 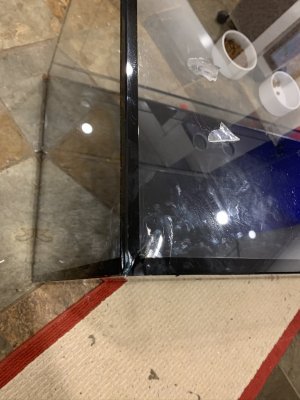 Well that crack was basically the worst mistake of my life. I was upset For a week or so but then got over it and realized I needed to fill in this hole with a tank. So I ordered another one. This time I had the movers drop it directly onto where it’s supposed to go.

this first pic is of the stand, and I put down a tarp around the edges to try and waterproof it somewhat. I’ll have to get something better than painters tape to hold it down when everything is finished. 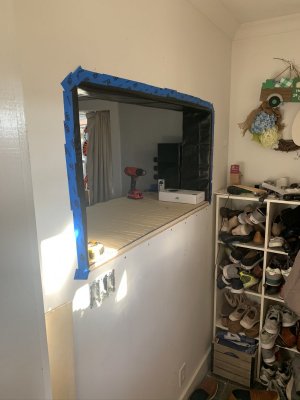 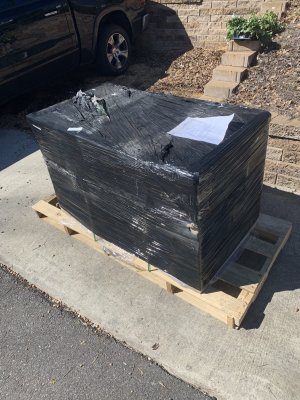 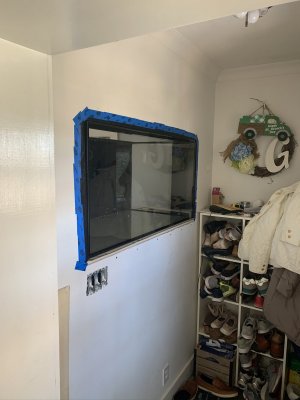 The new tank arrived on Friday and I immediately placed an order with Lowe’s for all of the plumbing. I ended up dry fitting and gluing it all that night. I’m pretty happy with how this turned out for my first time. 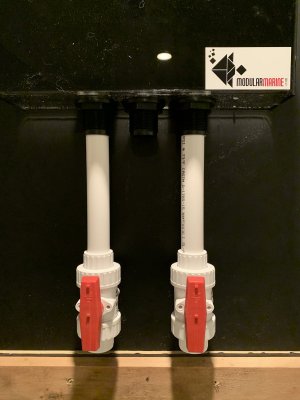 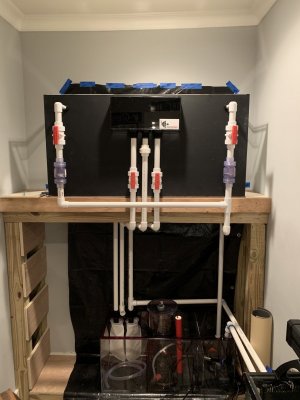 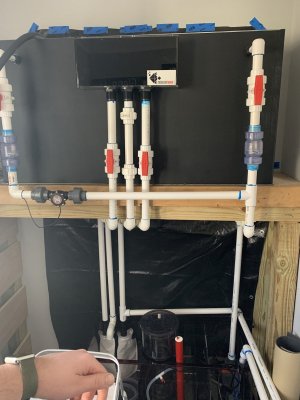 Put all of the rocks in during the leak test to try and rinse them off. I also picked up an Apex FMK from a local guy, but ended up taking it out because I couldn’t get the threads to stop leaking. I’ll revisit it later. Kind of thinking it would be useful as the emergency drain to send me an alert, and also the leaking wouldn’t be nearly as much of an issue. 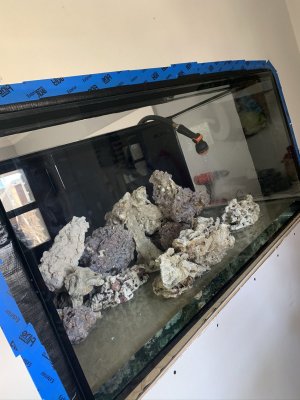 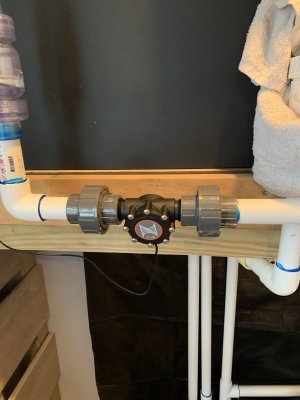 I aquascaped it Sunday morning and spent the rest of the day making salt to fill the tank. Forgot to snap a picture of the scape, but here it is filled.

Ended up having like a 60-40 split on tap water and RODI. Not ideal but I needed to get it filled I ran my first tank for about 8 months before getting an RODI so I’m fairly comfortable with it. Although the salt is at 30ppt so I’ll have to fix that throughout the week. 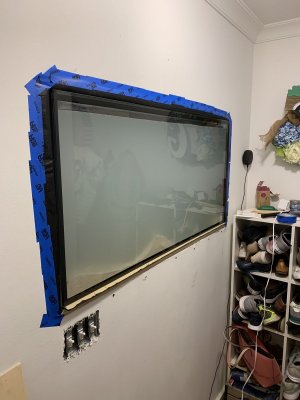 Looks great so far. From what I understand those valves are bad. They aren't meant for saltwater and will eventually freeze up and become inoperable.
OP

My luck is clearly not great but this is seriously pushing it. Looked down and saw that the plug for my skimmer was broken. I had it in the sump during the leak test just to have it. I’ve been keeping all of the plugs there, and I guess I stepped on it at some point. Bleh. Hopefully I can repair it. 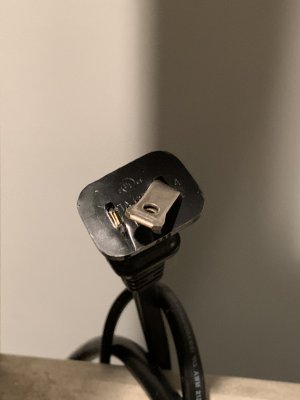 Ippyroy said:
Looks great so far. From what I understand those valves are bad. They aren't meant for saltwater and will eventually freeze up and become inoperable.
Click to expand...

Which ones? All of the red ones I just plumbed? Excellent lol.

Yup. Unfortunately those cheap ones are bad. Some guy in Florida with a multi thousand gallon tank had to have his redone. Ryan on BRS talked about it.
OP

I’m 6’5 so having the tall display has been awesome. I can barely see over the waterline, which is way different than the couch-height tanks I’ve been using.
That said, getting to it from the back is brutal. I’ll have to figure something out eventually because there’s no way I’m working off a ladder for the next decade. Its like 7.5ft to the top of the tank from the back. 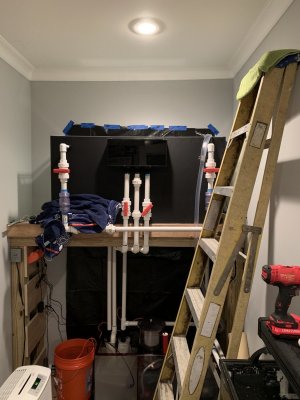 Ippyroy said:
Yup. Unfortunately those cheap ones are bad. Some guy in Florida with a multi thousand gallon tank had to have his redone. Ryan on BRS talked about it.
Click to expand...

very interesting. I’ll have to add that to my list of something to replace soon. Hopefully I’ve got enough unions to make it easier. I didn’t even think to google around about different valves, but sure enough here’s a link:

After pulling my sump to clean it out I was filling it and scrubbing. After I was done I tried to open the ball valve to drain it and it was stuck. Sump was in use for 4 1/2 years and never used it. I guess too much force was applied and it cracked the sump and blew out the wall. Live and learn...

Those valves can be reused in a mixing station for the RO water.

Everything else looks great though. Coming along nicely.

A few updates from the past week: I had a slow drip in the left return line and, thanks to Reef2Reef, was able to figure out that it’s because I had the bulkhead set up incorrectly. So Friday night I had to cut the return and set it correctly again. I’ve also added something to hold it in place so hopefully it stays put.

I purchased 2x AI Hydra 26 when they went on clearance, and ended up sending them into AI when I noticed that the spectrums didn’t line up. Eventually AI sent me 2 replacement Hydra 32s. I was originally ecstatic that they gave me an upgrade for a last generation light that I got for 40% off. Well one of the replacements isn’t turning on and keeps blinking red and blue, so hopefully AI can help me repair it. Just a frustrating delay.

Anyway, we have been running with saltwater for exactly a week, and I think it’ll be March 21 when I switch everything from the other tanks. I listened to all of the BRS/WWC hybrid videos this week, and I know they suggest 4 months but I think 1 month is enough compromise.

Hope you can get them fixed. Free upgrades are the perfect price if they work. Good Luck!
OP

Some other stuff. I ran some LED strip lighting around the inside of the stand to help me see while I’m working. The issue is that I hit something while installing it so it no longer does white, just yellow. Kind of a weird issue but the yellow still helps me. I also have a couple of Wyze cams set up on both the main display and the sump.

Now everything is hooked up, I just need to clean up the wires and install the Apex when I finally switch everything over. 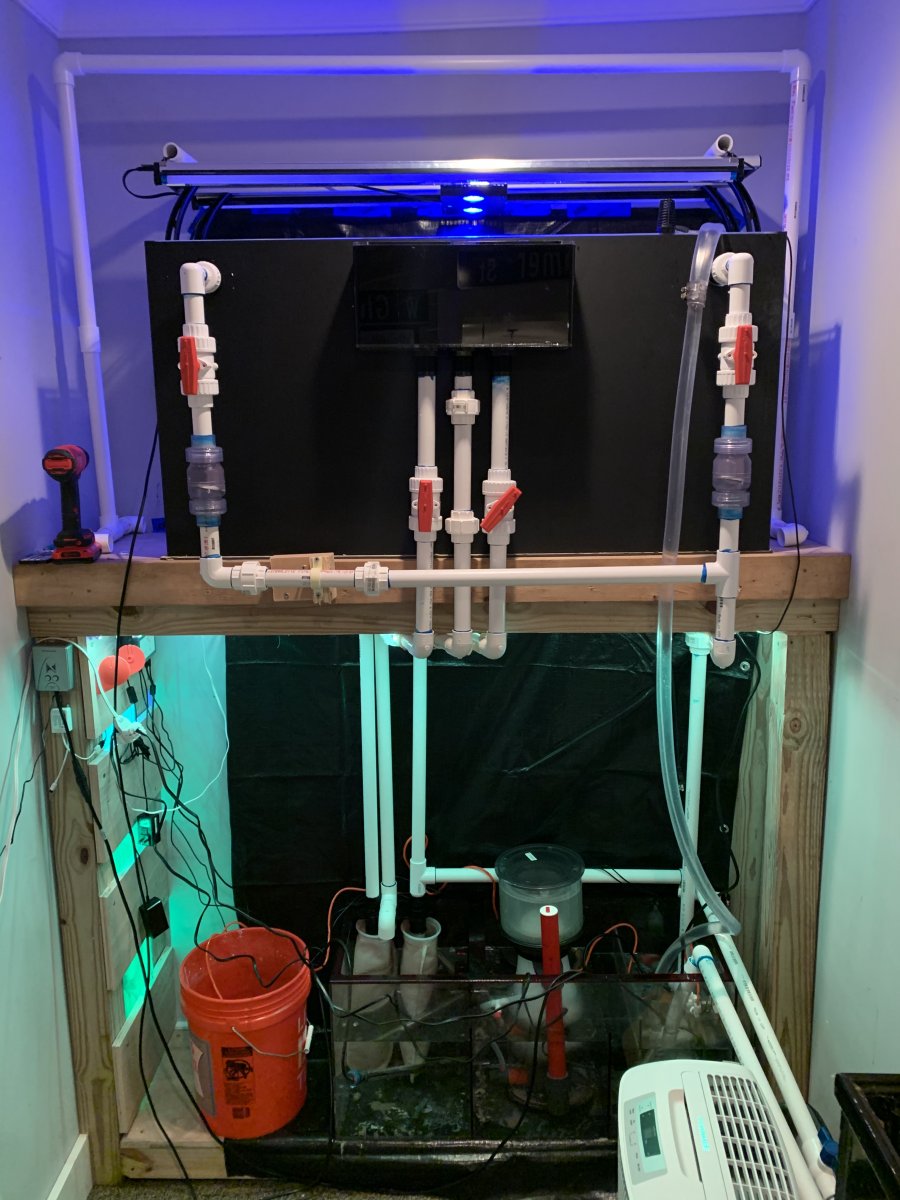 I’m going to will myself into a 40 page build thread lol. This is probably the last update until I get it stocked but I was able to get the light to work, and added in the T5s so here it is fully lit. 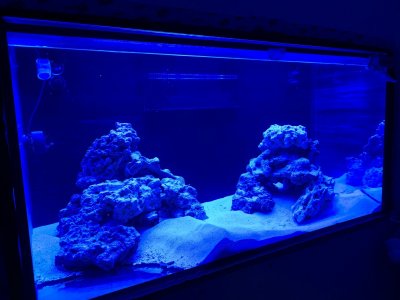 Tuffyyyyy said:
Which ones? All of the red ones I just plumbed? Excellent lol.
Click to expand...

I've ran those union balls for yrs no problem. The regular ones that glue in are horrible & are hard to turn in the store. Just my 2c