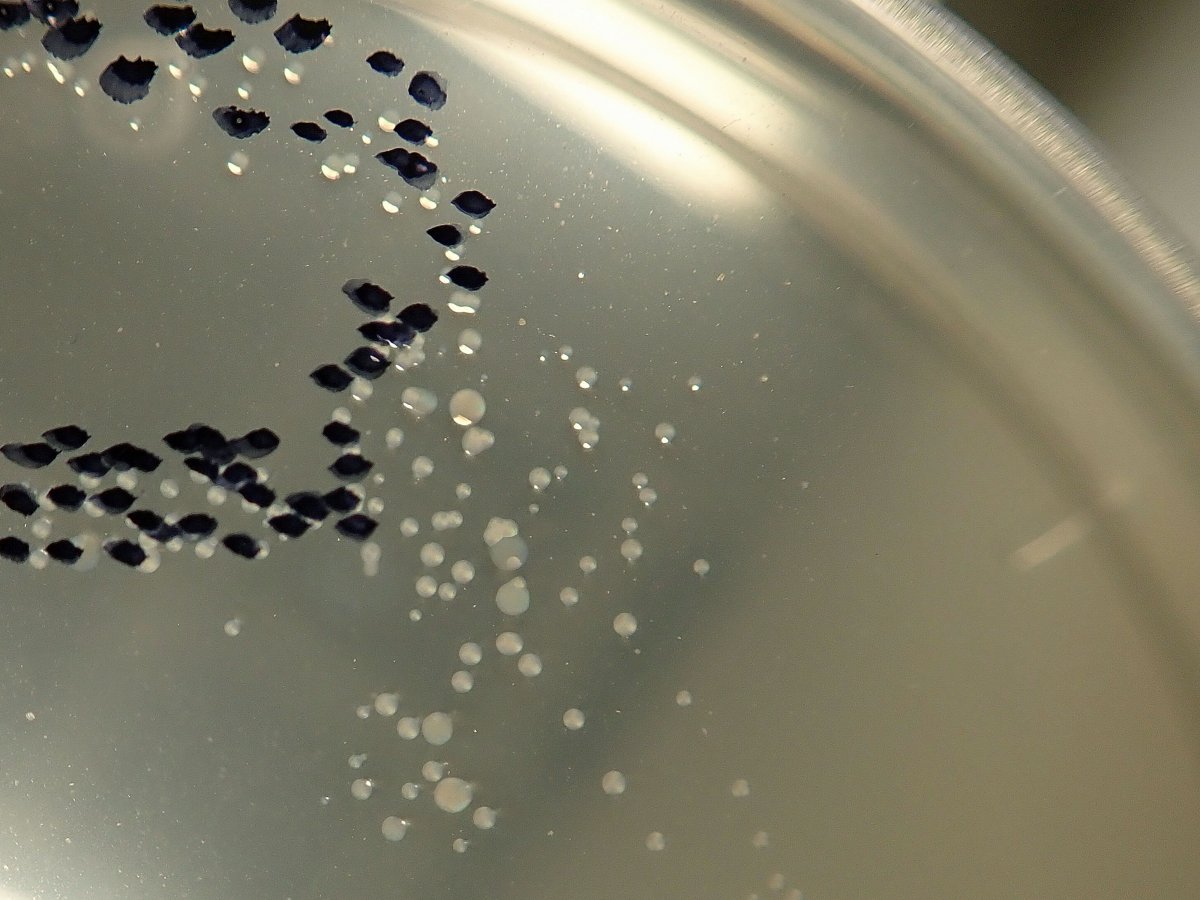 Routine analysis of aquarium water for total bacteria in smaller public and private
aquariums is rarely performed. However, many large aquariums monitor their fish and
invertebrate water systems for this parameter, especially if they already have the required
techniques in place due to government mandated monitoring requirements for marine mammals.
The information from these analyses can be used to judge the efficacy of various filtration
systems and appropriateness of feeding regimes. These data are also useful as an adjunct water
quality parameter for use in formal and informal studies.

The following is an outline of a simple spread plate bacteria analysis routine. Prepared plates can be purchased, simplifying the process even further.

1) Pre-heat the hot plate and wipe the counter top with Betadine or other disinfectant, Set the
closed petri dishes upright on the counter.
2) Add the agar to the bottom of the dry flask. Add 250 ml of very hot tap water (If the plates are
to be used to monitor marine aquariums, also add 9 g of synthetic sea salt). Swirl to dissolve the
agar. Place piece of foam in mouth of flask, and cover with tinfoil. Set the flask on the hot plate
and heat to a full boil.
3) Boil for 20 minutes, swirling the flask occasionally. Note: overheating will result in the agar
boiling over. Do not allow this step to proceed unattended.
4) Turn the hot plate off. Allow the agar solution to cool to approximately 55 degrees centigrade.
5) Remove plug and tinfoil from flask. Pass mouth of flask quickly through the Bunsen burner
flame. Lift the lid of one petri dish and add a small portion of liquid agar, (so that the bottom of
the plate is covered with the agar) and replace lid quickly. Repeat this on a total of 5 plates then
re-flame the mouth of the flask. Continue until all 20 plates have a thin layer of liquid agar in
them. Pour the agar very sparingly, or else there will not be enough for the full 20 plates.
Shaking the plates slightly as the agar is being poured will help level the agar against its inherent
surface tension, requiring less to be used.
6) Allow plates to cool for at least two hours. Remove the lid from a plate and place it open side
down on the counter top. Invert the bottom of the plate and rest it on the edge of its respective
lid. Continue for all plates. Once the plates have dried, (as evidenced by the evaporation of any
condensation which formed on the inside of the lid) replace the lids.
7) The finished plates can now be stacked, placed in a plastic bag and refrigerated, Do not store
plates longer than 14 days.
8) As a test, select two plates at random and incubate them for 24 to 48 hours at room
temperature. The presence of any colonies of bacteria or fungus after this time may indicate a
flaw in the technique used, and the remainder of the plates become suspect.

1) Remove the required number of TSA plates from the refrigerator and allow to warm to room
temperature. Sterilize a serological pipette by flaming with alcohol, or use a sterile disposable
pipette.
2) Draw a water sample into the pipette. Drain pipette, repeat twice, on the third time, retain
sample. Quickly continue to step 3.
3) In a draft-free area, on a sterile counter as described above, open the cover of a TSA plate,
hold it above the bottom of the plate, a little to one side. Drop by drop, allow the proper volume
of the sample to fall onto the media (usually 0.05 to 0.1 ml), It helps to move the pipette so that
each drop falls on a new portion of the plate.
4) Use the flattened end of flame sterilized glass rod to gently smear the water sample evenly
across the surface of the agar. Touching the possibly hot rod to a dry portion of the surface of the
agar will cool it before it to comes in contact with any of the sample. If the sample forms pools, the media may have too much liquid in it. Try re-smearing the sample with a sterile glass rod.
Take care not to smear the sample near the sides of the petri dish. Any colonies of
bacteria subsequently forming near the edge of the dish win be difficult to count. If too much
pressure is used, the glass rod may crack the agar. If this happens, discard the plate and take a
new sample. As soon as this step is completed, replace the cover of the plate.
5) For increased accuracy, the same glass rod may then be used to spread any inoculum still
adhering to it onto a second plate. The colonies from both plates would then be combined for the
total count.
6) Label the bottom of the plate(s) with the date, sample source, and sample volume Store the
exposed plates inverted for 36 to 48 hours at 22 to 25 degrees centigrade to incubate the sample.
7) Count the number of colonies (If colonies are small and difficult to see, incubate for a longer
period of time, or use a dissecting microscope). A felt tip pen applied to the back of the plate just
above each colony as it is counted win help avoid miscounts. If the second plate method is used,
combine the counts from both plates.
8) Divide the number of colonies counted by the sample volume This will give an approximate
number of bacteria per milliliter.
9) If the bacteria colonies are "too numerous to count" subsequent samples should be smaller in
volume. Diluting a sample with a known volume of sterile water is another possibility.
10) Dispose of the used petri dish and media in a safe manner. Covering the surface of the pates with household bleach, then bagging them for disposal is adequate.


Interpretation of the bacteria numbers can be difficult. They are most useful in showing
trends in a given water system over time. The following general guidelines apply to many
aquarium systems:

Multiple plates of the same sample on the same date may improve the accuracy of this
technique when averaged together. Factors which affect the relative bacteria numbers in a given
system over time may not always be easily identified. Certainly, if the specimens are on a set
feeding schedule, taking samples at the same time from one week to the next is mandatory. Free
floating particulate matter will tend to increase the number of bacteria in a given sample. The
point at which the sample is taken from the system will also have a bearing on the number of
bacteria present. Even the differences in the technique of one technician over another may
change the results somewhat.
Reactions: Tony Thompson, Fishinabarrel, EugeneVan and 1 other person
About author