Your Guide to Aquarium Photography #3 - Settings for Fish, Coral, and FTS Photos 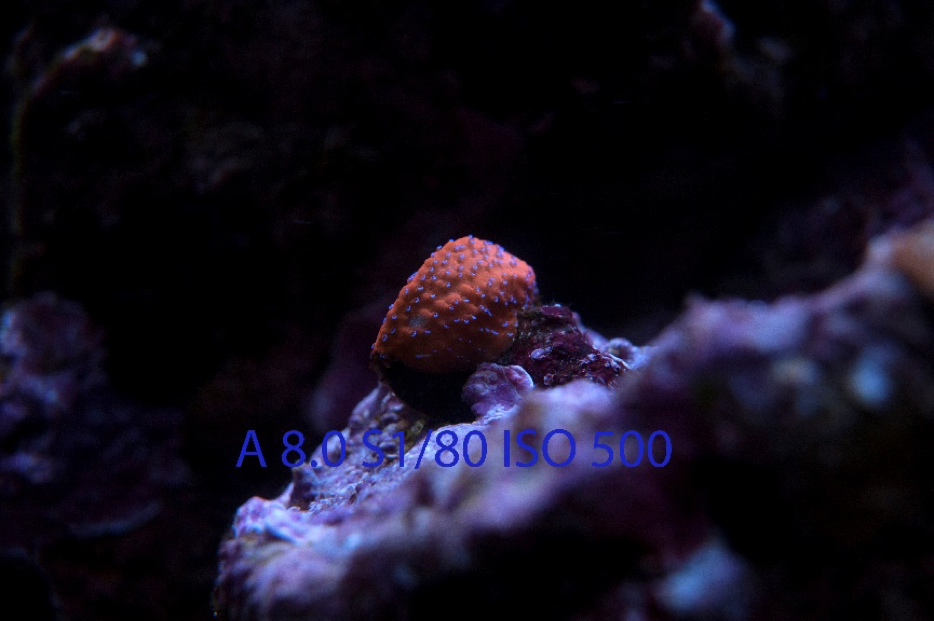 In our previous article in this Your Guide to Aquarium Photography series, we looked at how you should prepare for a photoshoot of your reef. In this third installment, we will be focusing our attention on camera settings/parameters and how to get them right for fish, coral, and FTS photos.

Choosing settings/parameters for each shot takes some trial and error. Parameters are specific to each tank based on lighting used, tank depth, and also the object in question.

When taking fish shots, emphasis is more on freezing the motion rather than on depth of field as fish are rather 2D in a picture. Some considerations can be made based on whether we need to have background appear sharp or blurred.

Some primary considerations are as follows:

Shutter speed: a minimum of the inverse of the focal length used as motion appears more the longer the focal spot is. So, if shooting at a focal length of 100, 1/100 for shutter speed is a decent speed to freeze any handshake or motion.

Flash can also be used to freeze the motion allowing a slower shutter (light from flash will overtake the tank’s lighting) and also a smaller aperture if required (larger number) for more depth of field.

For coral shots, the main consideration is depth of field, are we focusing on one coral and want to blur all else or do we want to see the whole coral with foreground and background in focus. That determines which aperture to choose. Experiment with different shutter speeds to get the light meter to show a good exposure or to see a nice exposure on test shots. If the shutter speed needs to be set low to get a good exposure and we start seeing motion blur, then raising ISO till the utilizable limit of the camera, will help increase exposure at the same light, aperture, and shutter speed. Using flash also helps, but many times flash washes out coral colors. For some corals like SPS or soft corals, it might be OK to stop flow to decrease coral motion in the shot, but for LPS it might not be ok to stop flow completely because some LPS will look ugly without flow. Shooting LPS or some zoas in strong flow might cause motion blur so a faster shutter speed can help, flash will also help with exposure and freezing coral motion. 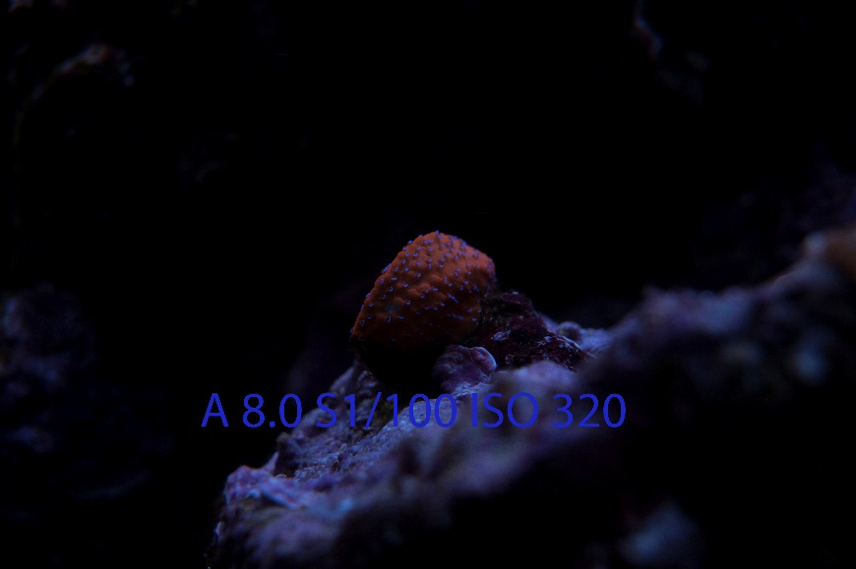 Overall overexposed images with burnt highlights (whitish areas in front of frag that can't be recovered in PP if not shooting in RAW. Motion blur visible on polyps when image is magnified and on blurred particles marked in arrows. Limited DOF.​ 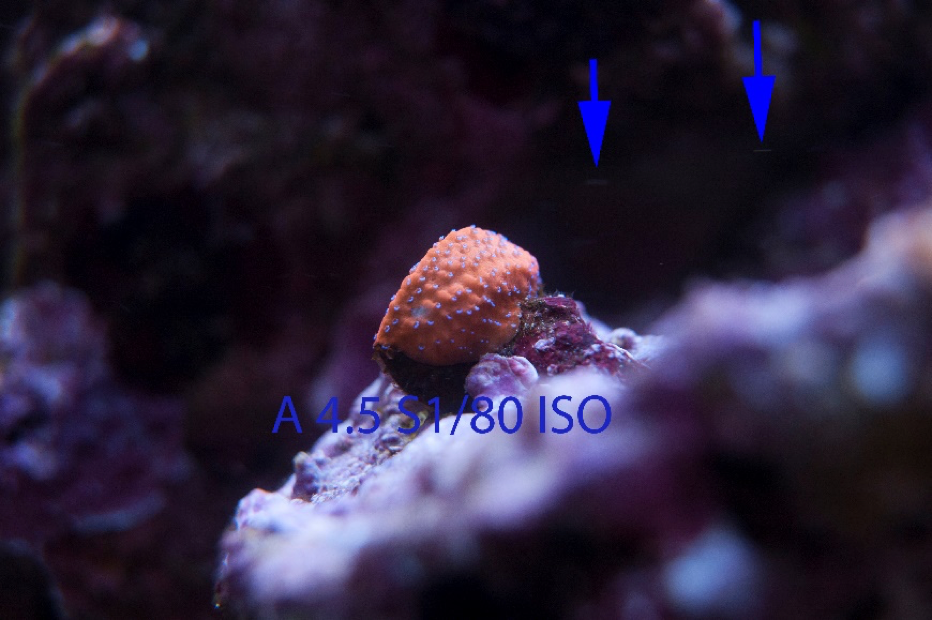 Improved exposure although still on the overexposed side. Decreased motion blur on polyps (more visible when zoomed and on particles blur in water - arrows) limited DOF adding to the feeling of blur in the polyps away from focus point.​

Better exposure (easy to optimize with minimal adjustments in post-processing without causing noise) No motion blur on polyps, can still be optimized with use of flash very good DOF with polyps on the front and back of the frag visible. Image can still be improved by levels adjustment, increasing contrast and maybe boosting saturation a tiny bit, and sharpening in post-processing. ​
Full tank shots:

Full tank shots are a combination of corals and fish. Therefore, they need more depth of field to show the whole tank best. I suggest moving back away from the tank as much as your room allows. As explained, added distance adds DOF at the same aperture, I get good coverage of my tank and its 34 inch width using even 2.8 aperture by moving back. Shutter speed has to be fast enough to freeze fish movement and that’s enough to freeze coals motion usually. Aperture will be a limiting factor and ISO will help. Use of flash is trickier here as its very difficult to avoid reflections.

Minor increase in DOF at the cost of added noise, made worse by increasing levels in post-processing​

Marked Increase in DOF with acceptable shutter speed to freeze motion, noise level similar to ISO 400 pic above due to limited need to increase exposure.​

Increasing the ISO more to the limit of the usable range of used camera results in very similar image quality at slightly increased noise.​

Reflections limit the use of flash in Full tank shots​
Hopefully this article has better equipped you for taking photos of your fish, corals, and full tank shots. As you have questions, feel free to join in the discussion thread, and be watching for the next article in our series!
About author