An another point, my urchin has been "stuck" for over 3 weeks now. Looking healthy, but very wedged into the live rock and glass. I guess I'm going to have to bite the bullet and remove a couple large pieces of rock (both with BTAs on them) and move the little guy along.

My clown does the same thing as soon as my hand goes in the tank he’s attacking it! He’s at the top ready to attack I’ve had him since 2008!

Why yes, urchins really do get stuck. I should have done a rescue mission for mine sooner, as it was stuck between glass and rock work for just over 6 weeks, denying it any food and the like. It has lost some of its top spines, but the underside still looked very healthy and "wavy". This morning I put a piece of nori on top of it when it was at the tank's surface, and it promptly pulled it to its mouth.
OP

This thread will soon need to be renamed - to:

Planning a lift and shift of the current tank to this slightly bigger build to make for easier cleaning and accommodate a purple pincushion urchin that keeps getting stuck along the sides. Coralife stand and Waterbox Clear Mini 20 have been ordered. Hopefully the straight transfer of equipment, rock and livestock won't result in any cycles and such. The only real potential "loss" of bacteria could come from the bottom plexiglass protector. I would feel better if this wasn't a bare bottomed tank, but that is a first world problem.
OP

@Matt Miller - thanks for the recommendation of the Waterbox. I can't believe the difference in build quality!

TriggersAmuck said:
@Matt Miller - thanks for the recommendation of the Waterbox. I can't believe the difference in build quality!
Click to expand...

Glad you're happy with it too! I'm very happy with my waterbox, just wish I had a bigger one for this huge light I won lol.

Looking forward to some after pics!

I love this tank, I like how many fish and the biodiversity of life You have in such a small tank. Do you have any tips for replicating this In a tank like a 20 long? I want to try doing this but taking it to the next level!
OP

Other than my lessons learned on page 1:
1. Go slow, and don't expect to get to x number of fishes overnight. Also, don't believe all the rhetoric of being able to add bottled bacteria and being truly safe to add fish immediately. Yes, some get away with it, but many do not. Rather use either the liquid ammonia or table shrimp methods to seed the tank.
2. Same thing goes for anemones.....you really really should wait for close to a year before starting to establish them. I added some at 6 months onwards, and it was really hit or miss (and stressful).
3. In a tank this size you really need to be careful with matching compatible fish and coral species (in the case of those with streamers, or 'nems with corals clearly).
4. Nothing replaces good husbandry. Daily cleaning of sponge materials and the scum on the skimmer neck goes a long way to containing nutrients, especially if you are going to attempt to load the tank a bit. Larger water changes, which are much easier with small tanks like these, also go a long way to maintaining good levels.
5. In small tanks like these expect new additions to potentially cause more problems with existing inhabitants. Every time I floated bags on the surface for acclimation one particular anemone would promptly migrate elsewhere in the tank thus shading or competing with other 'nems. Only way to avoid this is to really reduce the rate you add things (which I must confess since I have been shipping livestock instead of visiting LFSs personally means I tended to load up the orders to make the most of the shipping costs. Maybe not the best idea in hindsight).
6. As to biodiversity, if you do a dry start like I did that can be a bit tricky. (No live sand nor live rock). One thing I did in attempts to get Coraline algae to take hold was buy some Coraline encrusted clamshells from Reeftopia (along with Florida Ricordea attached to such clam shells). It may be worth it to get some live starter material (rock or sand) provided it is properly observed and quarantined. I also seeded the tank multiple times with pods.
OP

Transfer to the 20 gallon Waterbox is complete, and it "only" took 4 hours!

So far the only casualty (more like AWOL) is my peppermint Trimma Goby. I got him out of the tank successfully, but when I was transferring fish back in, he was nowhere to be seen. I'm hoping he lodged himself in the one rock which was in his holding tank (a Mr. Aqua 7.5 gallon cube if you must know) and will show up at some point when he feels like coming out. Otherwise my cats will probably find a wee little bite sized snack on the living floor. Or one of the larger rock 'nems had a bite sized snack. What a pity, because even though that Trimma is/was the smallest tiniest fish in the tank, I loved its personality.
Last edited: May 16, 2021
OP 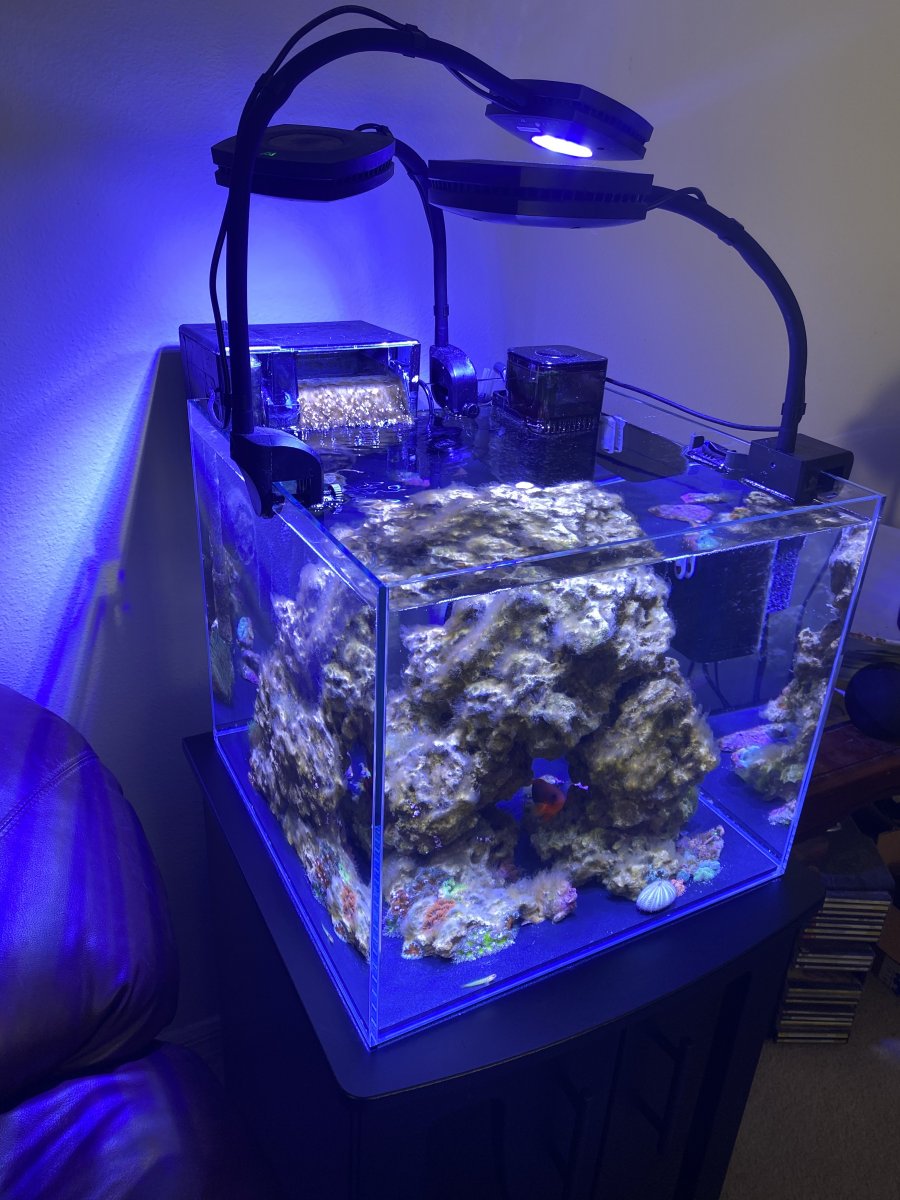 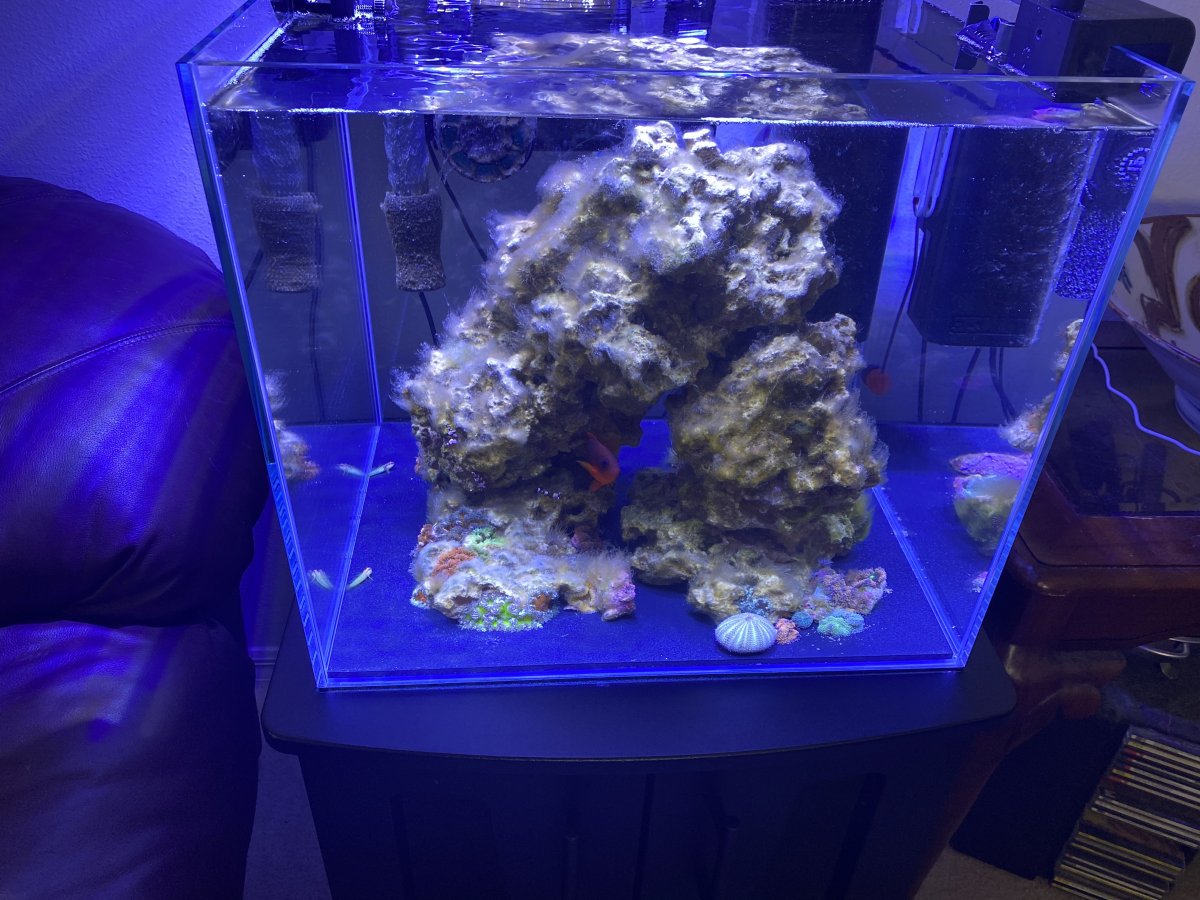 I think you can definitely fit another light in there on the front side....

Looking good all jokes aside, still happy with the tank choice?

I'm jealous your RFA'S look happy and I've had no luck with mine.
OP

Matt Miller said:
I think you can definitely fit another light in there on the front side....

Looking good all jokes aside, still happy with the tank choice?

I'm jealous your RFA'S look happy and I've had no luck with mine.
Click to expand...

Very happy so far. The urchin has yet to get stuck, and it has been 48 hours! Laffffff

And as far as lighting goes, I'm trying slightly different settings (trying to crank out a little more intensity 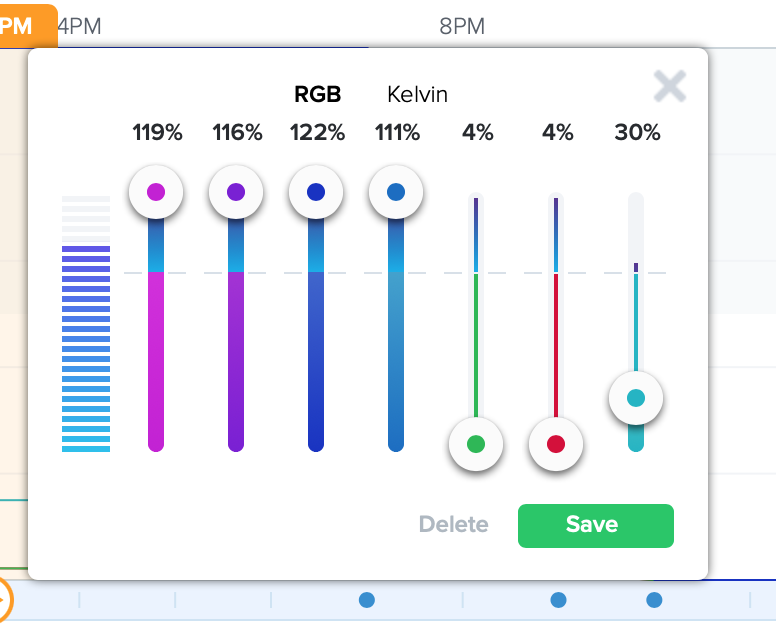 Update to lighting yet again (I know, I know!): 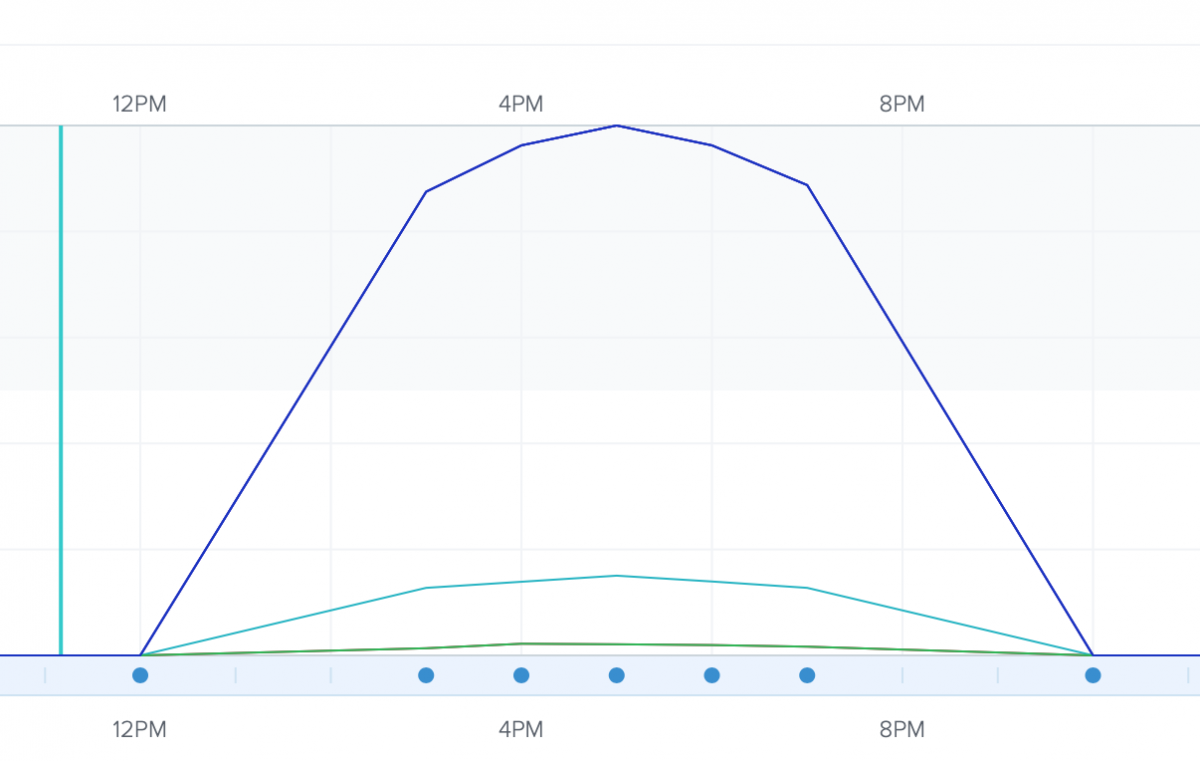 Added the following this week:
Also, I'm about to swap out my Tunze 9004 Skimmer with a 9012 I just picked up to accommodate the slightly larger tank. I know this is may be a little overkill, but if it works as well as the 9004 then I'm happy to spend the money.
Last edited: May 25, 2021

Added the following this week:
Also, I'm about to swap out my Tunze 9004 Skimmer with a 9012 I just picked up to accommodate the slightly larger tank. I know this is maybe a little overkill, but if it works as well as the 9004 then I'm happy to spend the money.
Click to expand...

@NoahLikesFish - See my first post. I keep the inventory updated there (equipment and livestock-wise).
OP

Dang clownfish.....I could be wrong, but I believe I saw the head of my new Yasha Goby (a $60 purchase) sticking out of my Fire Clown's mouth for a few minutes this morning. And after the "head" disappeared, the clown was breathing rapidly, as in having a bad case of indigestion.
Last edited: May 29, 2021

Pizza Anemones are Poised for their Aquarium Moment