To start off with at the end of May 2020 and just graduated with a Marine Biology degree. I wanted to travel to Australia obviously to go diving in the Great Barrier Reef! Unfortunately certain complications occur rendering me unable to do so. Instead, like any other aquarist I decided to bring the reef to me...then it began. I am always on a budget so I got a very polished used aquarium with stand and since it was established already I was able to add corals right away. The move though from the LFS to my house was a journey nevertheless. So basically that is how it started and it only continues to grow!

Filtration
Currently this tank is in my room where I just watch it while at the computer...daily. So to start we will take a look at my filtration which has three chambers from the intake to output. The left chamber has my leftover live rock filled in where it adds more bacteria and other invertebrates to thrive. The central chamber is divided into two sections where the water flows. The left side is where my 75 watt Eheim Jager TruTemp Aquarium Heater and the right having three separate boxes to add any filter meshes, carbon, etc. The most bottom box contains my ChemPure Elite (for 50 gallon tanks) which I run high due to personal preference. The mid box contains more live rock cause I don't like wasting good bacteria for future uses and the top box contains my Aquatic Experts FilterFirst padding. Lastly is the right chamber and that conations my digital thermometer as well as the aquarium pump.

Wavepumps
I have two Jebao ECO wavemakers that are place opposite from each other of the tank and both are on the lowest setting. The reason I have them on the lowest setting is due to the ones I have are definitely for a slightly larger setup but got them so that when I upgrade I can use them. They make certain corals that I will explain later really pop in the display area of the tank!

Lighting
I used to have a Aqua Knight LED light from Amazon that I used because well it was cheap. Not even a month later my LFS called me and said he has this light that has WIFI and connect to my phone. It is a RedSea 90 LED light and fixture and the LFS gave me a great price (Know I've been with this LFS forever since I was a kid with my first Betta) which was $250. The light is wonderful and I love being able to control it on my phone and adjust the settings accordingly.

These are all the corals I have now and more on the way! I would also like to add I actively prune and sell/grow as many corals in my tank in-order to keep from damaging one another. The Chalice coral being the worst collaborate. Haha

Fun fact: My C. mexicana covers the entire back of the tank making it look like a elegant seagrass bed on the back wall! Took 4 months to grow like that and lots of white LEDs.

So that's a quick run through of what I have now! I will update my coral list as they come in and that includes for fish. If you are curious to know what I dose...well ask away cause I do a lot in-order to keep everything happy. Also while scrolling I don't have a recent photo of my tank so I will do that once I can and add it to my thread. Please if any suggestions or simply want to discuss something that I have listed don't hesitate....this is literally my life and enjoy talking about it. 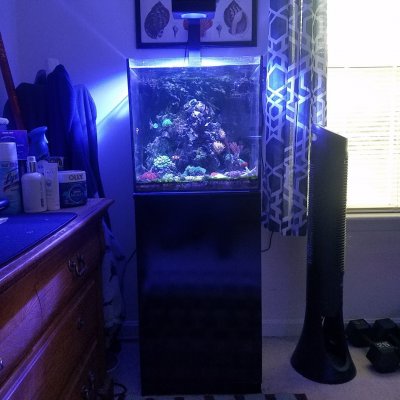 Added a picture from today! I will get close ups soon once I finish my water change.