princesspeach12 said:
Oh my goodness, this picture reminds me of some wall tapestries I use to have! (Still regret getting rid of them, the interior design folks on another forum shamed me for them.) I also had a cool octopus and manatee tapestry as well, and a seal? sea lion shower curtain! Bright side they were super cheap! Side note, almost miss the CA studio apartment life! 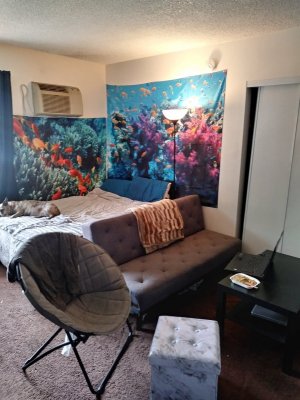 I have seahorse shower curtain// poop with the seahorses 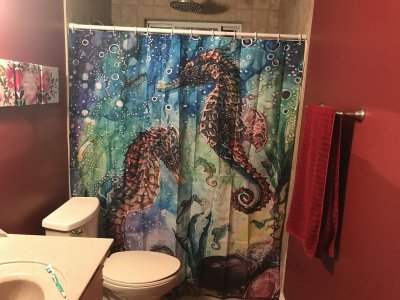 I have kept freshwater aquariums for over 12 years (ranging from 5 gallon betta tanks to 30 gallon fancy goldfish to 55 gallon planted communities to a 75 gallon mini-monster tank with senegal bichirs, blood parrots, peacock eel, and african brown knife), but never a saltwater one. My boyfriends parents had a little biocube with a clownfish and scooter blenny that I was envious of.

My first introduction to saltwater fish was when I went with my Grandpa at around 8 or so to a fish store to help stock his 29 gallon FOWLR. I chose a clown triggerfish, my sister seahorses.I know the trigger went in the 29, I think he put the seahorses in a 5 gallon. Knowing what I do now, I am SHOCKED that the store sold him a clown trigger for a 29 gallon. As an adult, they also make me feel a bit trypophobic, so also surprised I chose that fish.

Currently, I only have a 20 gallon long, planted betta tank that I recently set up. I tried to do a SE Asian biotope, using only PFS substrate, live plants from Asia, driftwood, and round rocks. A couple plants might actually be a species that is from Africa, so not the strictest biotope. I am only allowed 20 gallons in my apartment, which certainly limits which fish I can have!

Like my post says, I have attempted a saltwater aquarium several times. By attempt, I mean buy all/some of the equipment, but not actually fill with water.

1st time: 19 years old. Just moved into my 1st ever apartment (one that had NO LIMIT ON TANK SIZE!), found someone selling a 55 gallon with stand saltwater set up (came with lots of dry rock and had dried saltwater on it) for really cheap. Went to my LFS, bought the aqua C remora skimmer recommended, and a couple other things to do a FOWLR tank. Chickened out, turned it into a community tank with cories, coolies, platies, gouramis, and tetras.

2nd time: 22 years old. New apt with 10 gallon limit. Got the desire for a saltwater aquarium again. Having done more research, settled on wanting to do a softie reef. Got a 20 gallon long with stand (spent 5 hours assembling it). Ordered 30lbs dry rock from reefcleaners (felt so bad for the mailman that I gave him some drinks and snacks as a thank you), the saltwater API kit, and some salt as well. Decide that I am no longer okay pushing the 10 gallon limit, and sell it. Found a 15 gallon high, filled it with water, but it had a crack. End up scrapping the saltwater idea, and started 2 10 gallon planted aquariums instead for rescued male bettas.

3rd time (couple months ago, 27 years old)- Got 2 20 gallon longs, with the plan to set up a softie reef (pom pom xenia, GSP, blue striped mushrooms, leather corals such as toadstool and hairy, blue snowflake polyps, clove, maybe one LPS. Basically, I want a bunch of pretty pink/blue corals and also to have a bunch that the clownfish could choose to be hosted by as a surrogate anemone. Currently wanting 2 occy clowns, either A) 2 blue neon gobies, B) a yellow watchman goby, or C) CB Orchid dottyback or D) no other fish, possibly with 2 scarlet cleaner shrimp) and freshwater tank at same time. The 2nd tank is sitting in my closet, while I decide if I want to commit again to trying a reef I also want to get my betta tank established before I attempt setting up a 2nd.

I also recently discovered that there is a thing such as a $200 22 gallon 36" long aquarium. The only concerns I have (other than the fact that is it $200) that it is rimless, so using a lid would be difficult.

I've joined a couple other saltwater forums in the past, but this one seems a lot friendlier! I have some slight alternative views when it comes to fish keeping (only rescue fish and won't buy, want to have corals before fish so I can get a handle on it without harming a fish, only want to adopt captive bred fish (since my tank is so small, wouldn't want to keep a wild caught fish in there, unless it is a fish that is recommended for a 10 gallon, such as a small yellow watchman goby) and purchase aquacultured corals), which was not accepted some places.

The Tiger Reef In Yellowstone

Welcome to the REEF!!