Ok guys and gals I need some advice. Ive never QT fish before until now wanting to do things "right". Im currently on day 4 of slowing dosing copper and I tested ammonia in the QT with red sea test kit and I got 0.8ppm, before dosing copper I was at 0.8 I did a 8 gallon water change out of the total 9 that was in the tank and brought the ammonia down to 0.2ppm now today its back up to 0.8. So I was going to literally dump all the water out and add all new water and match the copper level I already have so I can just keep going on my way up to 2.25ppm copper. That's when I noticed my ammonia badge looks yellow still. And the green section that is supposed to be the alert is a 0.05ppm reading. So do I just go off of the seachem or trust redsea and do a 100%water change? I did just notice by someone telling me that the redsea is measuring total ammonia (nh3&nh4) together but in the instructions after reading it says anything above 0.2ppm has toxic ammonia i was getting 0.8 and that's why I'm freaking out. The seachem badge is still showing yellow but even the green section is only 0.05ppm which is lower than 0.2 that the redsea says is where toxic ammonia starts. Need some guidance, I should have cycled the QT tank first but as stated in my other post
I just added dr tims one and only and added fish right away (says u can on the bottle). Ill never do that again. Also my display is cycled, healthy and been running for a year. Jusy need help understanding this ammonia issues between 2 tests and if I should do a water change or not. 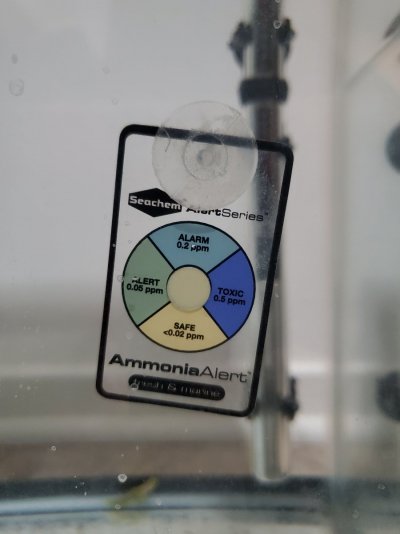 Can you not use water from the display in your qt? Any ammonia in the qt I would be changing the water, the fish are under stress anyway in qt, adding ammonia to that will not help.
OP

Reef. said:
Can you not use water from the display in your qt? Any ammonia in the qt I would be changing the water, the fish are under stress anyway in qt, adding ammonia to that will not help.
Click to expand...

I could add water from my display to the QT tank when I do a water change on my display. I was hearing from others that the redsea kit could possibly throw false ammonia reading from the copper but I'm not sure.

Get a good Salifert or Red Sea test kit.