Has anyone tried one of these? I got one yesterday and have set it up in my system, just want to know if anyone else has tried them and how it worked out for them. I also have a few questions for anyone that might have had any experience with it.

Does it always have air bubbles inside?
Is the outflow constant? Because mine is not. 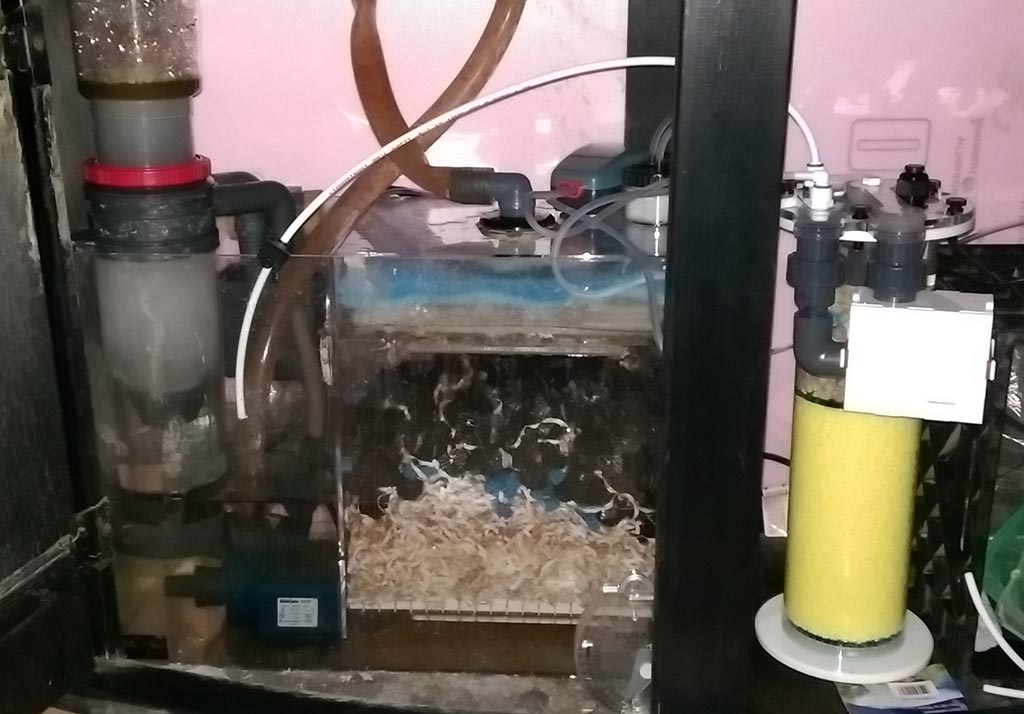 Bump! I'm following this one too!

I have one that im hoping to get in the aquarium this weekend (thanks to the sale at marinedepot a few weeks ago). I currently use a remote deep sand bed for nitrate control but it hasn't been working since it needs new sand. Rather than replace the sand and since the rDSB is very bulky I decided to go with the sulfur denitrator but I digress.

One things that i am curious about is how much alk / calc this unit puts out with the recommended 70/30 % split of sulfur / calc media. I want to run kalkwasser since it helps with phosphate control (GFO by itself isnt getting the job done) and my aquariums use of calc is currently minimal (about 30 ppm per week)

I have had this system up and running for a month now and all I can say is I am unsure this was even worth the $$. The effluent coming out of the drip back to the sump is darker color than the tank water in the NO3 test. Here's a photo of the test.

The drip rate is almost none existent, 1 drip per sec. or less.

The right is the effluent from the drip, the left is the tank. 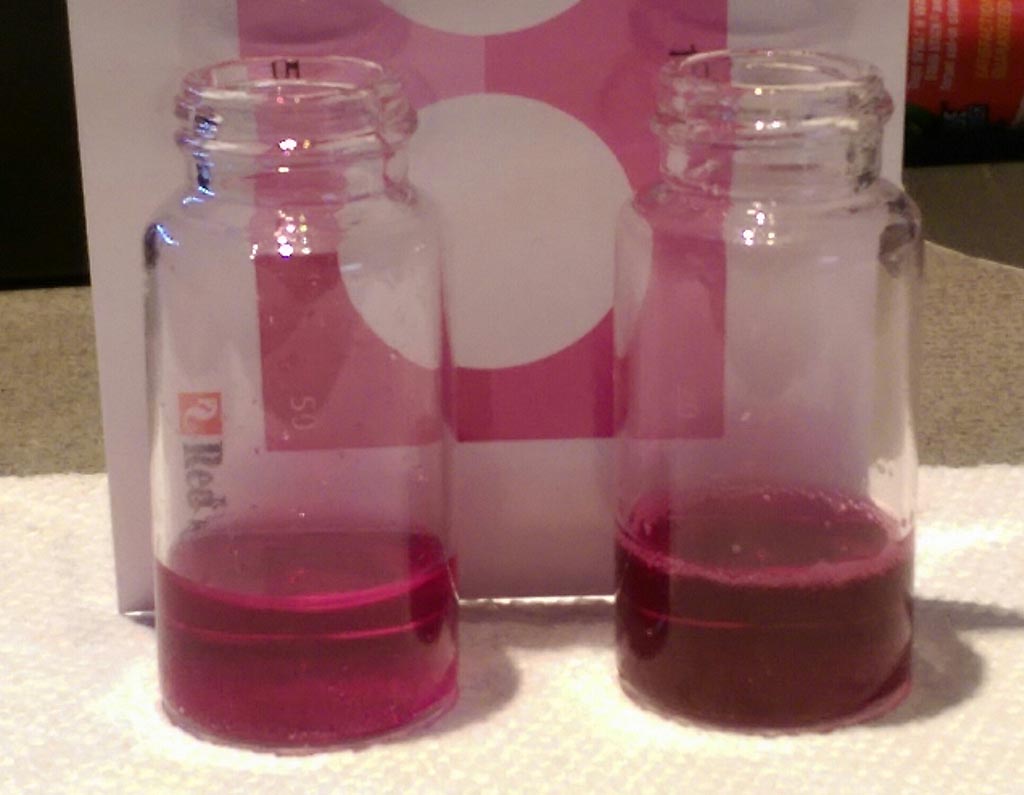 There are is a bunch of air in the reactor but it won't go away...

I ran one for several years and it worked great for me. Mine was a diy version and it did take what seemed forever to get cycled, it was about 6 weeks or so. There should not be any air in the denitrator so you do want to figure that out, where it came from and how to get it out.
I don't remember exactly how the instructions went on getting it cycled UT I remember testing the effluent several times a day and had to increase the out put as the nitrates changed.
You should be able to do a search and find so.e old threads with the instructions. As far as 70% to 30% I kept mine at 50 -50 sulfur to aragonite.

Fudsey said:
I have had this system up and running for a month now and all I can say is I am unsure this was even worth the $$. The effluent coming out of the drip back to the sump is darker color than the tank water in the NO3 test. Here's a photo of the test.
The drip rate is almost none existent, 1 drip per sec. or less.
The right is the effluent from the drip, the left is the tank.
There are is a bunch of air in the reactor but it won't go away...
Any ideas?
Click to expand...

Can you take a couple more pictures of your unit (the nitrate reactor that is). I want to compare how you set yours up to make sure i did it right lol. (you can send them via FB if you'd like)

I pulled out my remote deep sand bed last week or so and did a 25% water change. I was expecting nitrates to climb over the last week or so.
I was able to get my nitrate reactor online a couple of days ago. I used a 70/30 split and I have about 2" of void above the calcium.
It's been quite successful at lowering the ph of my tank, so much so that yesterday i turned off both the aqualifter and main pump until i get kalkwasser online (which should be tonight). Im using a doser to add kalkwasser which will help counteract the ph lowering. If not i will adjust my sulfur / calcium percentages.

I have about 2-3 drops per second coming out of the nitrate reactor.

It did take awhile to purge most of the air out of the system, there is still some in there though but it doesnt seem to be bothering anything. To help purge the air i just tilted the unit over about 30 degrees or so and most of it came out.

As far as nitrates are concerned, i did my water testing yesterday and my nitrates were between 1ppm and 3 but closer to 1 (nyos test kit). I was shocked by this low number. I had a nitrate spike a few weeks ago (hit between 12-15) so i was definitely thinking my nitrates would raise after pulling out the sand bed. I have a 4" thick marinepure block, im guessing that it has finally seeded and is pulling nitrates out of the water. Makes me question if i have enough nitrates to get the reactor seeded. (If not i can use it on my other tanks)

Anyways, i would stay the course on this. A nitrate reactor isn't a new concept. I had just finished reading about nitrate reactors in julian sprung's The Reef Aquarium book when marine depot had their sale. You've had yours running for only been 4 weeks or so, and jsin mentioned it took 6 for his to get rolling. (I've read 6 to 8 elsewhere as well). I recommend increasing the output to 2-3 drops per second, letting that settle in for a bit then re-running the nitrate tests. Also, be sure to run the test before any water changes. Since the reactor recirculates it will take awhile to get the old water out.

Ya Rags, it's me. I didn't even think about tipping it to get the air out. I'll give that a try. I really need a new sump but right now money's tight. I was thinking about removing the bioballs and plastic hay material and putting in the 4"marinepure block instead. But that might cause ammonia and nitrites to spike. I have removed 3/4 gal of the balls already and was going to remove some more soon. Have to do it slowly to keep it from spiking.

I did the 70/30 split as well and it does seem to drip at about 2-3 drops per sec but it's not consistent and varies quite a bit. I think it might be the air in there causing the drip inconsistency. I guess I need to keep testing it for at least a few more weeks to see if it is seeding. I don't have any issues with the ph as of right now. seems to be holding at 8.0.

I'll take some more pics and post them up for you on your FB page later on tonight.

I was wondering what the other stuff was in your sump. I would definitely recommend putting in the marinpure block. Is there any way to add the block in and keep the current balls in and half of the plastic hay? It will take some time for the mareinpure to seed but then could slowly pull the remainder of the balls / hay.

And yea, mine settled down after some time and the drips are more consistent now. Hopefully getting the air out will hbgelp with that.

Thats good about your PH, mine was holding steady at 8.1 before the reactor and in less than 24 hours dropped to 7.9. I wouldve already had kalkwasser running in my tank but my doser was delayed at the manufacturer (it's made in Poland).
OP

actually the hay supposedly has more surface area than the balls do for bacteria to adhere to. I removed a bunch of the air and it seems to be dripping more consistently now. I'll give it some time to settle and will check it again later, thanks

Nice, how did the balls do as far as nitrates? Did you notice a drop in nitrates when you pulled some out? Some posts ive read that bio balls can be nitrate factories but i dont have any first hand experience and they may have been referring to just wet / dry filters.
I really like the marinepure though. I have a 4" block, 1" block (i got that because my skimmer needed to be raised a bit over an inch) and 2 quarts of spheres.
Let me know the results later
OP

Here's a pic of the unit 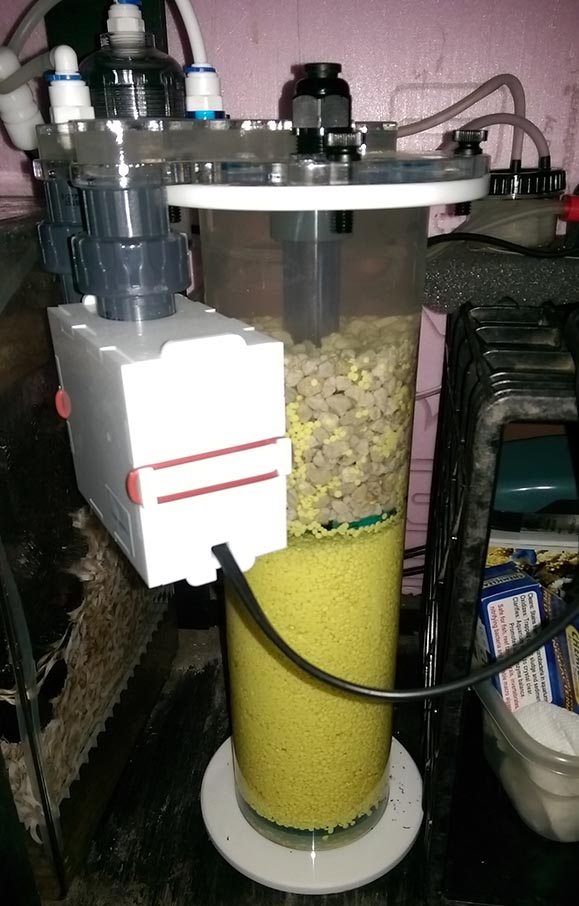 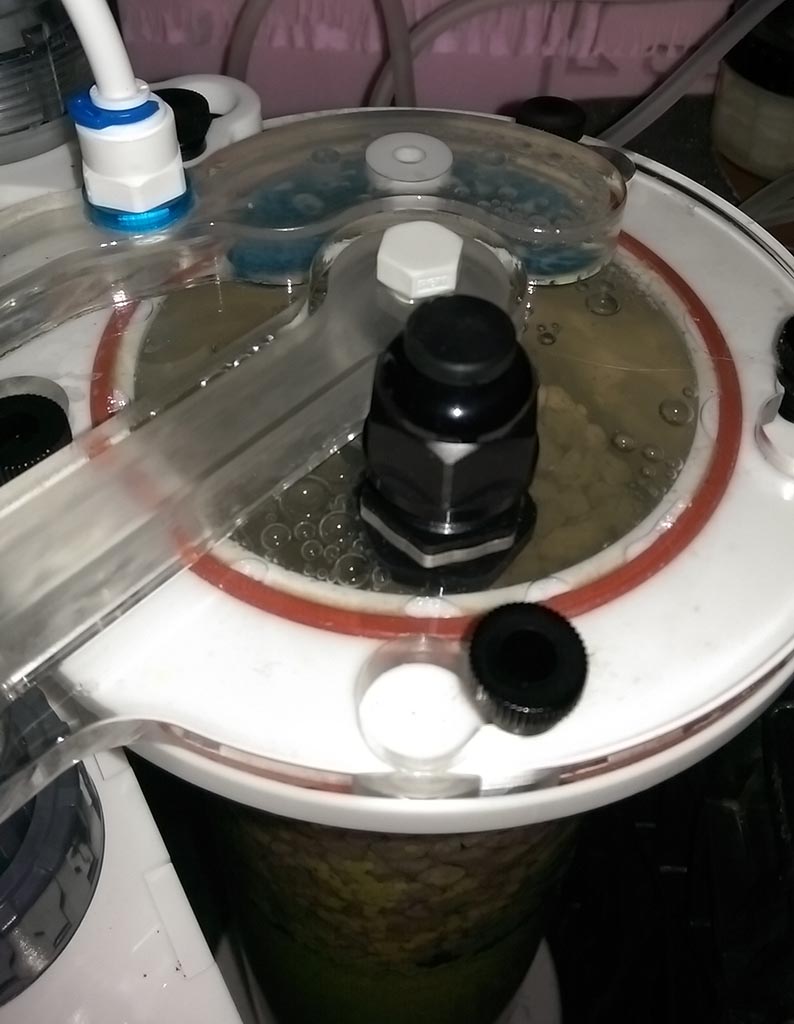 Bio balls are like bacteria factories- they provide tons of surface area for your beneficial bacteria to grow on without taking up lots of space. I've never used one of these denitrators before, but I always load up on bio balls in my sump.
OP

Yes they are good unless they are used in a wet/dry setup. Then they are nitrate factories.

Cool thanks Fuds, looks good and is looks like how mine was set up.
FYI I had a leak between the sicce pump and the union, had to use thread sealant to get it to stop.

I've been lucky, no leaks. But now saying that, it will be my downfall...
OP

So after 2 more weeks, the effluent looks great. Now have to wait and see how long it will take to clear up the DT. It has been installed for 6.5 weeks.

Here's pic of the tests as of right now. 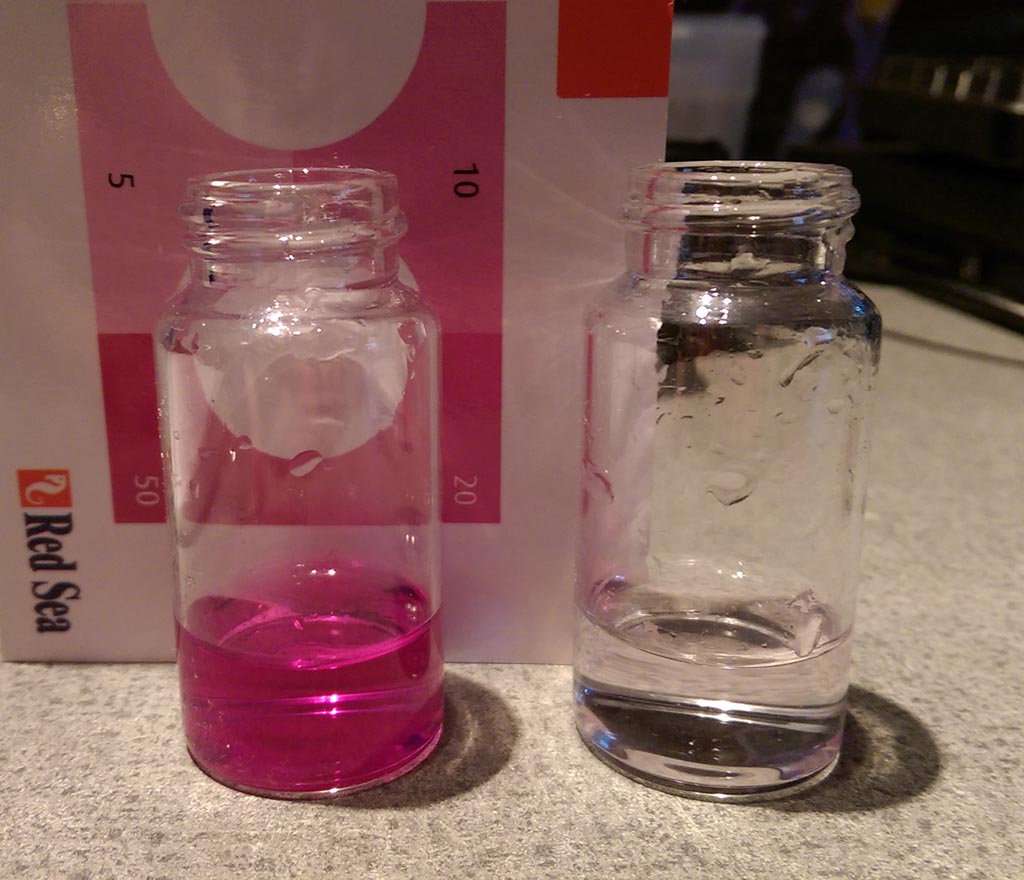 Right is tank and left is from the Denitrator. Tank is looking better but this was after a water change so could be that as well.

Fuds, it that backwards? Shouldnt the denitrator have less color than the tank?
OP

Well tank nitrates are down to 10-20 ppm . I think I need to get a more precise test to get a better number as the RedSea isn't that precise. Effluent is still crystal clear and tank color is getting lighter.