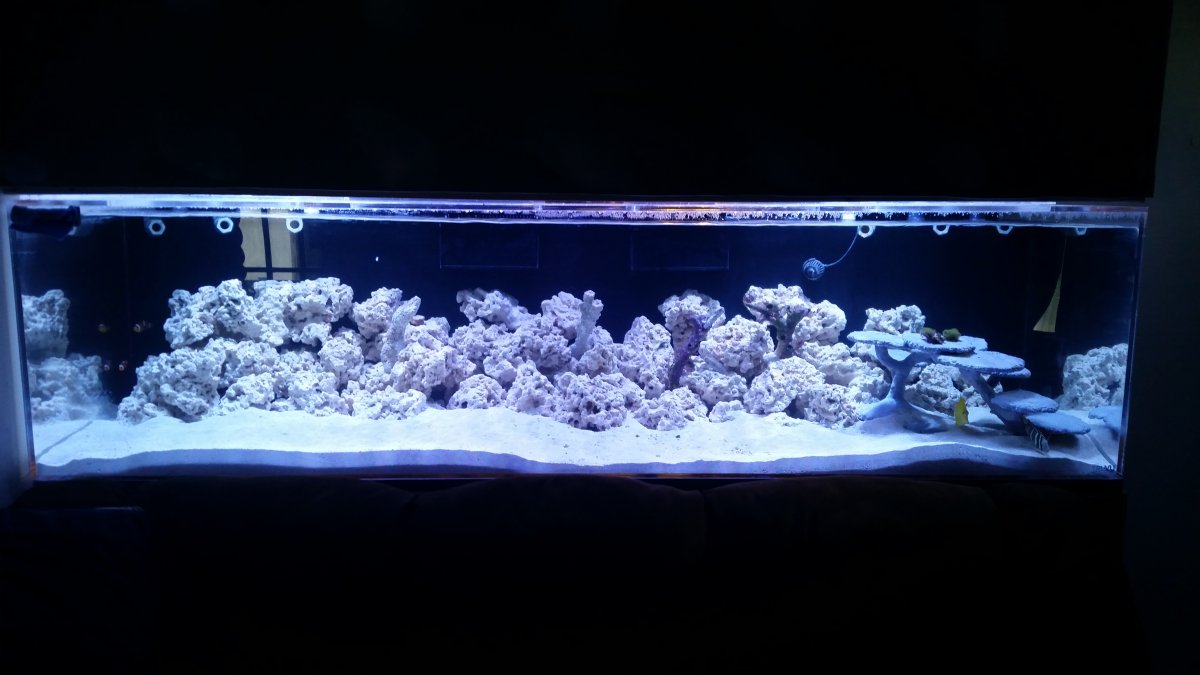 So getting ready to buy the house i currently live in and were trying to get some ideas of who people have and how they have insured their home with a large aquarium in it.

I don't have a large tank (roughly 100 gallons) but when we got the new tank the first thing I did was call my insurance agent. Told them what we were doing and they added a rider to our policy for a negligible amount which covers us in the event of a catastrophic break.

Mine is covered under the homeowners.

Mine is also covered via the homeowners policy, but oddly just for the tank and any damage caused. The livestock is not. It's a great topic and any one with a tank really should check their policy.
K

I called many insurance companies last year, they don't cover livestock, and they are tricky about what they actually cover.
1. Most companies will not cover water damage
2. Any company that covers water damage, will only count personal negligence
3. The water from your tank is not considered "water damage" it's considered "sewage" so not covered under water damage

The only way you can get things covered, is no matter what happens you would have to say something along the lines of "I was an idiot and left the hose running". Because they are covering you, not "manufacturer negligence" in a tank failure or equipment failure.

I spent hours on the phone with different agents, they are sneaky in the way they break things down and the wording.

Appreciate all the input guys. Looks like statefarm will cover this as a home customization and asked us to declare a value for all the equipment tank and labor to replace in the event of a catastrophic failure. But like everyone else no insurance for.live stock. So we insured it for 15k

Thanks for the info.

I had my house burn down and the standard homeowners covered everything except live stock ($100 maximum on "pets"). I will say, Cincinnati Insurance is the absolute best. No questions asked, just paid me for everything I listed including live rock, live sand etc. Wow, does all the stuff you add to the tank over the years add up when you do it all at once!!!!

Thanks for this thread, calling my insurance agent now lol.
Jason

But only If the power goes out, someting fails like the Pump or Chiller. If the glass breaks and water get on the floor.

Im not covered If its my own fault or the equipment is old and has a High change af failing.

If a brand New dosing Pump desides to dump All in the tank im also covered as long as the Pump aint to old. Tough i run reaktor Today

I live in denmark. We checked up on it like to weeks ago hence the the Price on fish and corals starting to add up.

Sounds to me that you are paying for nothing because what is to old 30 days? If left as a judgement call on the person writing a check it will be as short as possible.

Its allready included it the insurance for the rest of the house. So aint paying ekstra for it.

I guess out of Warrenty would Conclude the product as old depending on What it is.. but yes that part is tricky.

I was more after If the power want out in the bullding then i was covered. Thats the only big concer to me
L

Good luck getting the actual coverage when the time comes. As a manufacturer I was covered up to 2 million for the aquariums we manufactured. But...when we investigated making a claim for a $60,000.00 dollar loss on a large project the company responded by filing for declaritory relief which is a nice way of saying they sued my company for investigating a claim for coverage. The outside investagator hired by the insurance company found for my company but we could not afford to defend ourselves from the large, agressive, insurance company. They just buried us in lawyers. Nice. Insurance companies are only good at taking your premiums. My company never had made an actual claim we were just investagating our coverage. In the end my company absorbed the loss as a write off and moved on. Oh yes and I fired the insurance company and took my business elsewhere. Never depend on an insurance company for things they are not use to covering. You should be prepared to cover the loss on your own or only build a system you can afford to replace or walk away from.

Just a suggestion by someone who has been there and done that.

If I were you I would try to get something in writing. Reason I seen something similar (was not reef related was music related) where equipment was insured then the place caught fire (faulty equipment) and the insurance denied coverage saying the items had to be in new condition to be covered and as soon as the equipment was packaged it would be deemed as used.

Carefully read your policy. Understand insurance companies like to make money and the odds are in the insurance companies favors. This is how the policies are written. This is were the rider comes in, and the language of the rider is really spells out what is covered basically protects you. So what if it cost you and extra per year. That is your extended coverage.

This is an interesting thread. I once dropped a cell phone in a lake and when I called my carrier and told them that the very, very, nice lady on the phone said " So your phone was stolen".

Wording is everything when filing a claim. Good to know we can extend some measure of safety from our homeowners or renters insurance.

Yes if you get mold from a leaky tank it is easier to remove said tank and say we had a plumbing leak (dont mention from a fish tank) and boom your covered.