Are Dinos more common in the hobby now than years ago? (some data)

This question has come up a few times, and opinions vary. A lot of common techniques and habits have changed in the hobby from one decade to the next, and it is inarguable that dinos are more commonly discussed now than in the past.
But are the two related? Has the hobby changed in a way that has led to more dino outbreaks in our tanks, or are we just more aware of them?
My default position is that we microscope and ID dinos much more, and that alone may explain the difference. But there are others who have been in the hobby much longer and say that they never had to deal with dinos as a pest before. There are some things that've changed hobby-wide that could plausibly be responsible:
LED peak wavelengths vs Mercury peaks (T5 and MH)
better at measurement and creation of near zero P and N conditions
sources of live rock, and the communities they bring

So to try to shed a little bit of light, I dug back as far as internet searches can take me (which is not that far).
I searched for complaints of "brown algae" on hobby forums from before microscope IDs and dino awareness were popular and looked for pictures of the outbreaks, to see how many of them we would now retroactively label as Dinos.

Posts from 2005-8 that complained of brown algae mostly didn't post tank pics, and those that did, very few of those pics are still online. But here's my labelling of those few that were. I included what a sample of the same results from 2016 gives.

Here's the striking thing in looking through these old posts - 95% of the conversations went exactly like this...
OP: I have brown algae on my sand/rocks [doesn't post any pictures]
Response1: It's diatoms and it's normal.
OP: but they are very bubbly and slimy.
Response2: It's cyano.
[End of thread]

Yet, during this time period of very low dino awareness, I'd estimate 1/2 to 2/3 of the posts about "brown algae" were dinos. Diatoms are not really problematic and are less likely to generate forum posts.

To get one other piece of data on this question - have our nuisances changed in the recent hobby past? I compared the results for "brown" vs "green" "algae" across several popular hobby forums from as far back as there is search results. I combined results across the forums. 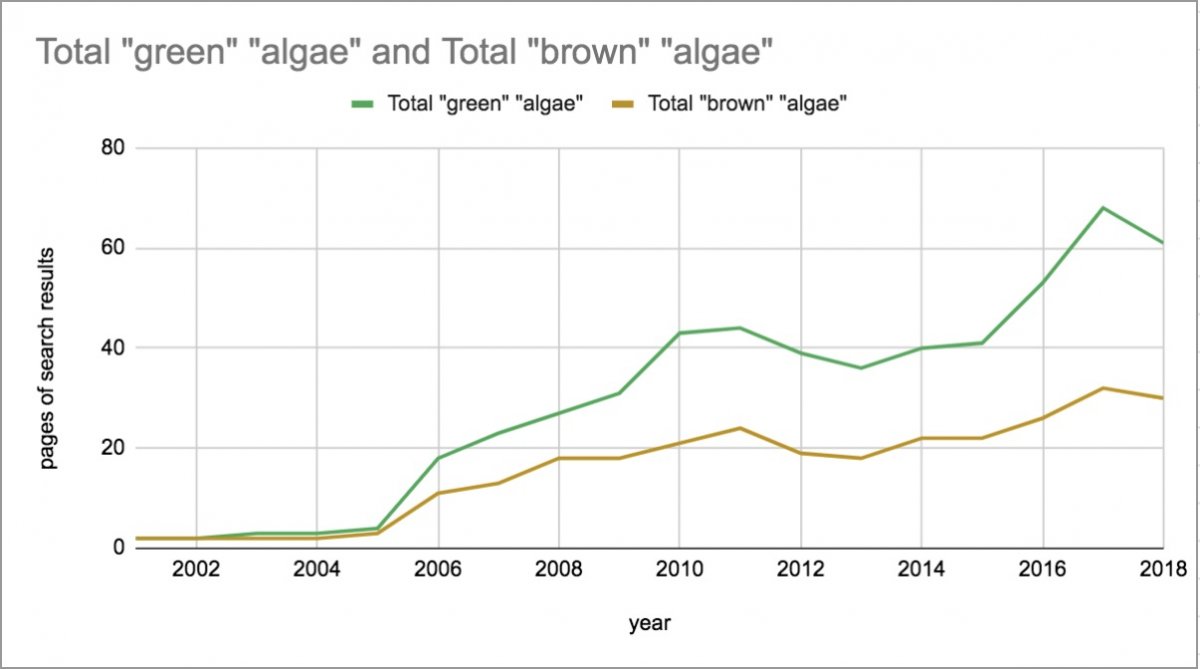 As you can see, both increase but no clear shifts toward one or the other. If the hobby has changed in a way that has gotten really good at killing off green algae and thus getting more issues with brown algae (a favorite pet theory of mine), one might see a shift in the relative amounts of discussions on this... but that's not the case. 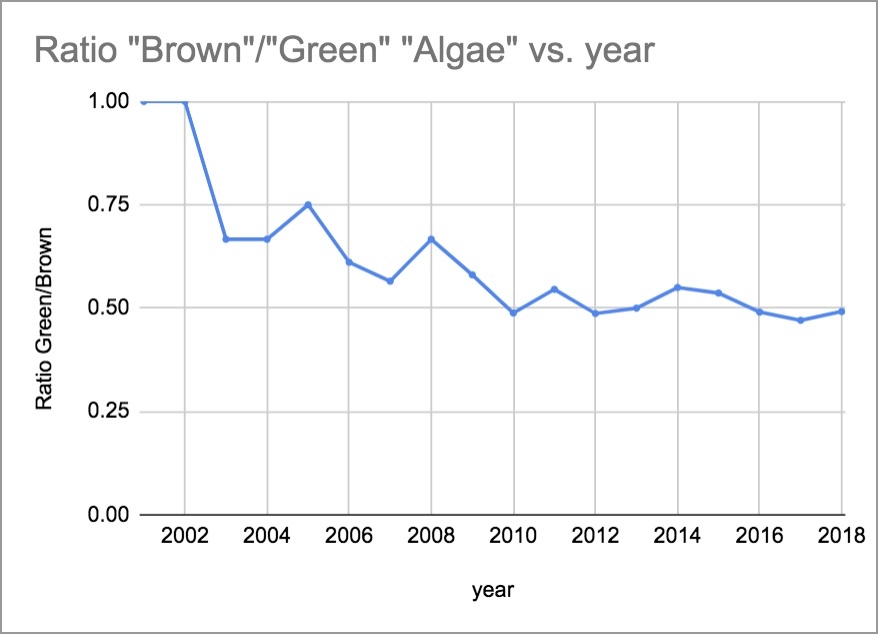 Data from 2005 and before is so thin the ratio is not meaningful (basically just a page or 2 or results from each forum, so brown / green ratio of page results is near 1) From 2006 on, the ratio of complaints about brown algae to green algae has been essentially constant, between 0.5-0.6 "brown" complaints per "green". If LED lighting, or widespread ability to measure and push P and N to near zero, or any other recent hobby trends had disfavored green algae, allowing dinos to thrive - then it sure doesn't show up in this data over the last 15 years.

I'm open to other interpretations or arguments (maybe the "change" that long time hobbyists refer to was pre 2005), or if anybody has a better idea how to get data on the question, I'd be interested. But I was a bit surprised how far back I could find widespread dinos and how constant the ratio of complaints has been.
Last edited: Dec 1, 2020

Very cool, what was the sources you used for your metrics?

I often wondered the same thing.

I am still battling Dino’s, I feel like it’s a micro fauna availability issue. I’ve gotten rid of them at one point, but last week I added a new rock (was live rock with zoas on it) however because of this rock the Dino’s returned and only populate on this rock , literally no where else so I’m just riding it out with high nutrients . The rock is slowly changing and Dino’s are shrinking

josephxsxn said:
Very cool, what was the sources you used for your metrics?
Click to expand...

I did google searches with the quoted terms in the first post. For pics, I looked for "brown algae". Comparing the amount of brown vs green I searched "brown" "algae" and "green" "algae", during a certain time period. I added the total number of pages of results from R2R, RC, and Nano-Reef.

Interesting! Thanks for the investigation! Bump for others
J

The symptoms of "Toxic tank syndrome" (or "wipe out" or "whole tank wipe out") described by Martin Moe, addressed in most of his books (and during his angelfish breeding in the late 70s), seem to have a lot in common with dinoflagellates poisoning.

Symptoms:
All fish, or all the fish of a particular species "wiped out" within a 12 to 24 hour period. Fish, retaining full color, lying dead or paralyzed on the bottom of the tank. Low nutrient levels, clear water.

Martin Moe mentioned that the syndrome most often occurred in tanks heavily populated with young fish of a single species.... In other words, a fish breeding operation.

I have personally had the experience of a "tank wipe out" in a 500 gallon single system of broodstock and juvenile fish. The Clown fish (about 200) did fine, but all the other fish flame angelfish and jawfish died within 12 hrs. So a species specific toxin (symptom often associated with "toxic tank syndrome")?. The other details of my "wipe out" seemed to also perfectly match the symptoms of "toxic tank syndrome".
Martine Moe had suggested, though not conclusively , that a toxin producing Vibrio sp. of bacteria was the likely culprit in his "Toxic tank syndrome" and I assumed, at the time, that was what had happened in my system.

I had been dosing the tank with "green water" (live Isochrysis and Chaetoceros microalgae) in order to feed the planktonic fish food. A common practice in larval fish rearing.
If I remember correctly, one week to a couple days before the "wipe out" the green turf algae and cyano, that was covering much of the brood system, had transitioned into a globular slimy substance with air bubbles, that was unlike the algae I had seen over the past 4 years of system operation. My assumption now is that the "green water" bloom in the system had stripped the system of nutrients (particularly phosphate), and allowed the dinos to take over... Ultimately resulting in a toxin release killing the fish.

An interesting note is that planktonic microalgae (at least Isochrysis) seem to have a lower N ratio (~16:1) than typical macroalgae (~100:1)... which may indicate a higher capacity to strip phosphate from the water.

Other notes:
I also had recently begun dosing Iodine to the system... known to exacerbate dinoflagellate problems (as well as Vibrio)

Martine Moe quotes regarding symtoms:
“400 gallon fiberglass tank was littered with the forms of dead and dying larvae. The larvae were examined and found to still be alive, with heart still beating, but seemingly paralyzed. No movement, no flotation, no parasitism, no bacterial damage.”
"adding to our frustration was the fact that we could add clown fish, neon Gobbi and even Jewelfish larvae to the tanks in which all the angelfish lava had died, with exactly the same water and food organisms and have them survive and easily grow out to juveniles"

Not disputing that in some cases a Vibrio bacteria could be the culprit in "Toxic tank syndrome". Just wondering how often it could have been a dinoflagellate issue in the past.

walked the sand with the crustaceans

Dinoflagellate infestations weren't even a recognized problem years ago, but that said, I don't remember having any issues with them in the 1980s. My best guess as to why is that, like most people, I was using only live rock, no dry or artificial rock.
J

Correction:
An interesting note is that planktonic microalgae (at least Isochrysis) seem to have a lower (N)P) ratio (~16:1) than typical macroalgae (~100:1)... which may indicate a higher capacity to strip phosphate from the water.

The colon "P" turned into a smily face with tongue out.

Isn't this likely correlated to dry rock vs live rock builds? I like the data driven approach. Every tank I have started with dry rock succumbed to dinos at some point early on.
J

Now the colon tuned into a frown face. oh well.

rkpeterson,
Good point with the live rock... But live rock, is/was rarely used with larval/juvenile fish rearing and live micro-algae is. Possibly, creating a dinoflagellate favoring environment that was simply diagnosed as "toxic tank syndrome" in the past... Particularly in larval fish rearing environments.
OP
T

Yeah, I have to write N/P ratio to avoid extraneous emojis.

I really appreciate the accounts of people who have personal experience from this time and can engage on the question.
Maybe if 80's-90's was largely dino-free in the hobby, A better data source would be pictures of tank nuisances in printed books from this time.
Feel free to drop some book recommendations in here that might be helpful on the question.

I think so I think it’s because tanks are getting more and more sterile... there’s no variation in microfauna

O
Dino to Cyano to Dino

How many Dinos is OK?