I have no affiliation with @Biota_Marine, but with the recent stop of exports by Hawaii, and the large volume of people that have or would like a Yellow Tang in their aquarium, I figured I would share an experience of the Biota Yellow Tang I just received. Initially I attempted to find some reviews of their livestock, however the only thing I could find was posts from multiple years ago and marketing or trade show type articles.

You can purchase these specimens either directly from Biota, your LFS, multiple online sellers, or in my case, I purchased from @AlgaeBarn. Prior to purchasing, I reached out directly to Biota inquiring about what little information I found about the quality of these specimens other than their early releases from a few years ago which a number of them had erosion issues. To my surprise, they responded extremely fast and assured me that those issues have since passed as their processes have evolved.

I placed my order, it was delivered via Fedex directly from the Biota facility in Fort Lauderdale. The styrofoam container is of high quality, the fish was double bagged and included two heat packs as it was sent to me here in the frozen tundra of North Dakota. The fish was quite active prior to acclimating which was a good sign as usual and after floating the bag, opening and adding/replacing liquid from the bag, the fish was released within about an hour into my QT system. The fish was shipped in a roughly 1.020 salinity water so the acclimation process took a little longer than I normally like.

The fish is roughly the size of a 50cent piece, maybe a little smaller, and is still fairly translucent with its yellow colors starting to show. The fish is actively exploring the tank along with a small Tomini and Royal Gramma that are also starting their stay in QT. First feeding with Rods frozen and the fish actively fed after only being placed in QT a few hrs prior. 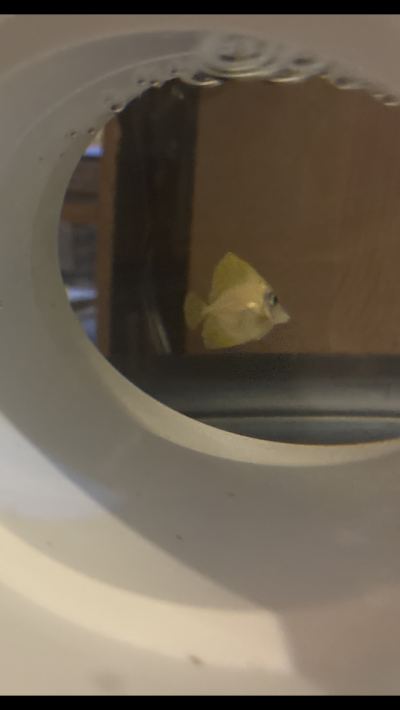 I don't know if this is a regional thing or what but besides prices increasing a little for wholesale there hasn't been a shortage for us for yellow tangs. In fact a local distributor will sometimes have upwards of fifty on hand in a variety of sizes. If I wanted to I could get dozens tomorrow without issue. The price increase that you see in retail stores is rather artificial as the price increase from wholesalers is rather small. Again this might be regional or maybe it feels like there is more of a shortage because it seems like websites like live aquaria are always out of them and selling small yellow tangs for about 120 bucks. Source: I own a fish store in Chicago lol.

I will say I believe and hope that captive bred fish are the future as it is obviously much more sustainable than wild caught fish, and I'm glad to see more people are getting captive bred fish when available.
OP
T

You can no longer receive a Yellow Tang from Hawaii, all that is available is what is left in the supply chain. When that's gone, that's it beyond captive aquaculture.

tfeeken said:
You can no longer receive a Yellow Tang from Hawaii, all that is available is what is left in the supply chain. When that's gone, that's it beyond captive aquaculture.
Click to expand...

Been hearing that for a while. There are a ton of rumors about future availability of some fish. I heard over a year ago to expect yellow tangs to hit two hundred dollars and while they did jump a significant amount in price on the retail end they still aren't close to 200 dollars (excluding maybe larger sizes). I'm just saying from my point of view it looks like yellow tangs are just as available as any other time, and maybe one day sometime soon the stock of them will run out, but for now I'm not too worried. It'll be interesting to see.
OP
T

Here's a read for you @Old Fritz. They are no longer allowing collection. https://www.mauinews.com/news/local-news/2021/01/advocates-celebrate-aquarium-fishing-ban/

Great review. Thanks for sharing from someone who has been thinking about getting one. Please keep us(me) undated.

tfeeken said:
Here's a read for you @Old Fritz. They are no longer allowing collection. https://www.mauinews.com/news/local-news/2021/01/advocates-celebrate-aquarium-fishing-ban/
Click to expand...

I'm aware. I'm just saying the range of yellow tangs extends beyond Hawaii. While Hawaii is a huge producer of aquarium fish there are many other places that will still export them. The ban has been in effect for a couple years now I believe. This court ruling was just to solidify the ban which will cause a jump in price obviously, but I don't think you'll never see wild caught yellow tangs in stores again.
A

I did think it would be a problem considering they are aquaculture now.

Old Fritz said:
I'm aware. I'm just saying the range of yellow tangs extends beyond Hawaii. While Hawaii is a huge producer of aquarium fish there are many other places that will still export them. The ban has been in effect for a couple years now I believe. This court ruling was just to solidify the ban which will cause a jump in price obviously, but I don't think you'll never see wild caught yellow tangs in stores again.
Click to expand...

This is different. Essentially puts into effect the law that has been passed years ago but has been under legal dispute. The new ruling as of last week has banned any collection in Hawaii pending completion of an environmental impact study. Also a little different than the previously passed ruling to stop issuing new permits after the current ones expire. This is a brutal ruling for only a select few people that will have almost no impact on the environment.

There are only 40 commercial aquarium collection licenses in Hawaii and somehow the state decides that the action of those 40 specific people are responsible for destroying the Hawaiian ecosystem. They still have more than 3,000 commercial fishing licenses that are active, who I would imagine kill more reef fish in a year than those 40 could hope to collect in a lifetime. I'm sure they also have a few hundred locals in the water every day spearing as many fish as they can without the requirement of any license. God forbid those 40 licensed collectors take a few live fish to make a living.
I also believe most yellow tangs were not collected in this region anyway though so I don't anticipate much of a change in supply or price. Hopefully won't be much of an issue for us.

Thank you for the review Tfeeken and for supporting aquaculture! The tang will color up to full be much more yellow over the next few days. We've learned they get really pale during shipping.

Also as for Hawaii, yes the Hawaiian wild caught fisheries for ornamental use has been closed down. The last shipments of wild yellow tangs to wholesalers was last week but I think a few are still sneaking through. As @Old Fritz suggest they are available from a few other locations but they are considered endemic to Hawaii because of the sparsity they are found elsewhere so wild caught they will rarely be found in the industry after the current supply runs out.

So we're trying our best to keep up with the demand of our captive-bred yellow tangs now that there is a massive need for them in the industry. As Tfeeken mentioned you can find them through us, @AlgaeBarn, @LiveAquaria, and LFS around the country. There is likely going to be a lull from now until March because of their natural spawning cycles but we hope to fill the gap and need in the industry as best as we can! 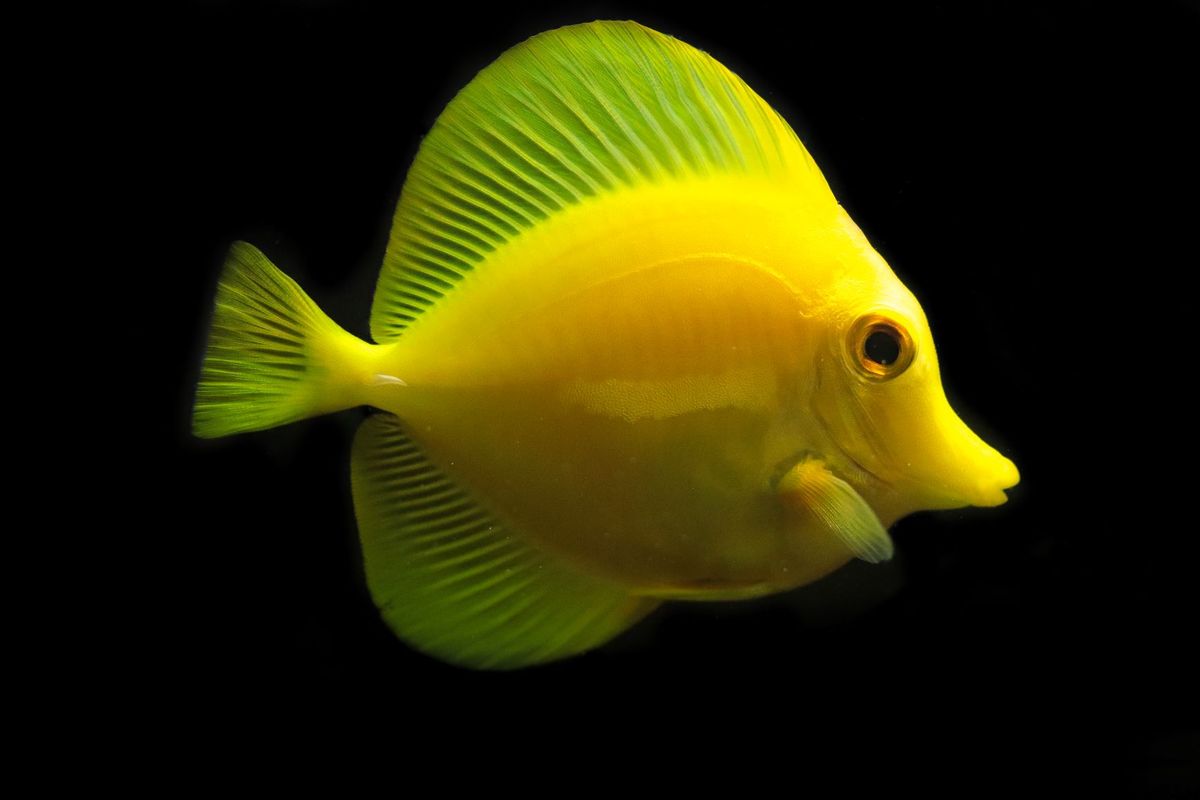 Zebrasoma flavescens-The yellow tang is the most iconic aquarium fish around the world. Bright yellow in coloration and endemic to the islands of Hawaii this is a fish we breed in conjunction with the Oceanographic Institute of Hawaii Pacific University. These are voracious herbivores do well...
shop.thebiotagroup.com

I went to my LFS in NW Ind on Monday. They had 5 yellows left and one yellow eye Kole. Said it would be the last they would have. I got one of each as mine had previously been wiped out from velvet before I learned to QT. I had planned on waiting till summer but because of the ban I jumped on it. They are both doing great in QT now.

I also bought a biota yellow tang last summer. It's full yellow in like 2 months. Happy with my purchase.

qhduong said:
I also bought a biota yellow tang last summer. It's full yellow in like 2 months. Happy with my purchase.
Click to expand...

How big was it when you got it and how big is it now?

tnw50cal said:
How big was it when you got it and how big is it now?
Click to expand...

Keep us updated, though I’m going to get a Purple (ideally) or Scopas (if not the Purple) instead.