So I was going to do the traditional buy a larger saltwater tank and then get a quarantine tank etc. later, but decided I would flip that. I'm not doing things quite by the book, or like many do them. I picked up an inexpensive hang on back Aqueon 29 gallon and the following items:


30 gallons of RODI/saltwater (will get my own RODI very soon)
34 pounds of live rock from LFS
2 x 20lb bags of CaribSea Arag-alive (1mm-2mm I believe, could not find info on bag)
1 sicce voyager nano 2000 stream pump, +1 on the way (for flow)
4oz Dr. Tims (will probably hold onto this and use it with next tank or depending on what's going on with bacteria levels when I go to get my first 2 clowns)
1 Marine Pure biofilter media brick (8x8x4) may drop this into the tank 2-4 weeks before getting next tank
1 Eheim thermostat/heater 150W (on it's way)
1 Hanna salinity tester
1 API Master saltwater kit 550
1 small Topfin glass thermometer

My goal is to ensure this tank cycles and runs for 2-3 weeks, or longer if needed, then add a couple clowns. Depending on how things go I will get some basic fish/cleanup crew from there on, but my ultimate goal is within the next 6 months to get a minimum of a 90 gallon, up to 175 gallon reef tank to transfer the live rock, marine pure, etc. to and get a quicker cycle on that one... then long term work up fish and coral. Focussing on easy stuff for at least a year, maybe 2 or more... or forever if that's what I like and do well with! 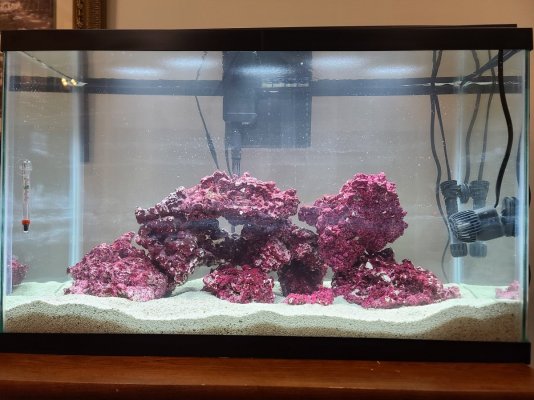 Beautiful set up and I love the plans! I actually have 3x AI Hydra 52 HD for whenever you upgrade. The rocks look great too with plenty of holes for fish to swim through!
OP

MartysReef said:
Beautiful set up and I love the plans! I actually have 3x AI Hydra 52 HD for whenever you upgrade. The rocks look great too with plenty of holes for fish to swim through!
Click to expand...

Assuming you have them listed in the classifieds?

Pretty pumped, 48 hours in and ran tests. Colors don't look as good in the pic, but zero Ammonia, zero Nitrite, and i'm guessing 2-3 Nitrate, definitely below 5. Salinity at 30ppt, temp steady at 78 the last 2 days. I was doubting it would cycle that fast even with the live rock and live sand, but shows how little I know. I've seen a lot of people basically say it's "insta-cycle" but wanted to test myself. That said, I'll run tests the next few days but may go ahead with the clowns over next few days too as long as tests stay good.

Great plan! Way to go incorporating QT into your plans from the start!

Well, added 2 clowns and 1 Royal Gramma on Friday midday. They are doing great, really enjoying watching them already! The only downer, and it's not bad, is I have built my scape with so many hiding spots (and the rocks have tons of crevices too) that the Royal Gramma is only seen a few seconds at a time, as long as you are very still in the room for a while lol... Not sure if he is even eating much as I haven't seen him come out at all during feeding. I did see him pop out and grab a single piece off the bottom last night, assuming it was food.

I also upgraded to an eheim heater and have an additional Sicce Xstream 5000 (1320GPH) wave pump that arrives today. Curious if that's too much power for this 30 gallon tank... The other one is a Sicce 2000 520GPH and has very low output.

Ammonia is staying at zero, but on day 4 the Nitrites went up from zero to .25 and the Nitrates are 2.5 to 5 now. Assuming nothing major to worry about but will keep monitoring.

Need to work on this new eheim heater, it's reading wrong for temps. I have it set to 74 now and tank is staying at 78-79 per 2 different temp readers (hanna and top fin in tank thermometer)
Last edited: Mar 7, 2022
OP

17 days and the 29 gallon is doing wonderful. I'm 99% sure there's already some red corralline algae growing on one of the rocks, almost looks like rust. Unfortunately I lost the Royal Gramma on day 5, she instantly hid when added and came out for 2 hours on day 3 and then died. I did a 15% water change yesterday. The tank is showing zero ammonia and nitrite, and nitrates dropped from close to 10 to 3-4.

Today I added a Yellow Watchman Goby and pistol shrimp, an emerald crab, and my splurge was a Fiji Lemonpeel Angel. I took my wife and I had planned to get a foxface rabbit but they were too big already for this tank size. My backup was a Flame Hawkfish, or maybe even 1 small yellow tang. She really liked the Lemonpeel so we opted for that, especially since it should do very well in the 30 gallon tank until we upgrade.

Upon putting everyone in the emerald crab tried to face off with the pistol shrimp and after a few snaps the crab backed away. Then within 1 minute the goby found the shrimp and they seem to already be saying their hellos (see pic, pistol is under the rock to the right, you can barely see him). The Angel seems to be cruising around fine and the crab is tooling around too.

So now I am completely second guessing my unplanned leap to buy the lemonpeel. I totally missed that they are not reef safe, even though I had on my list to not buy any angels! This is why you stick to a plan right? SO, I may have to either try to trade this beauty off, return her to the LFS at some point, or put her in another tank (highly unlikely as I'm pushing my luck with the planned 120 Gallon, AND this 29 gallon being up as quarantine).

Good looking start. I like the idea of starting with what will be your QT tank, that should work out nicely and will make things easier later on. Dwarf Angels are always hit and miss, it's a risk that some take and it works out but for many people they have issues with coral. I recommend checking into the Genicanthus Angels (Bellus, Swallowtail, Lamarck, Watanabei) if you want an angel in your larger tank for the future. They are reef safe and do great in larger tanks. Maybe you could find a small one to start QT in the 29gal until you get the big tank up. If you keep the Lemon Peel there are a lot of coral you will have to keep out of your tank, one being my favorite - Acans... They love them lol

Pistol Shrimp and Emerald Crabs are a lot of fun.
OP

So, I went by the LFS and they said to bring the Fiji Lemonpeel back in and they would either swap her out for something similar price or give an instore credit! They don't always do this, but know I'm learning and also will be spending lots there *wink*. That said, she was doing great, just decided she wanted to eat my Kenya Tree, as well as she kind of starting nipping at my watchman goby and even the clowns.

They took her back as she is doing very well. I was able to pick up these items to add to my beautiful starter tank, future QT tank.

1) Flame hawkfish (amazing fun fish to watch)
2) Fiji Yellow Blenny (looks same as Canary blenny to me)
3) A 2 spot goby (already chewing on the sand)
4) 6 turbo snails
5) 3 Mexican snails, and 3 other mix snails (yeah, I actually get excited about adding snails even)
6) A nice frogspawn coral (did my first coral dip process!)

I also replaced the basic Aqueon lid with a clear glass canopy lid, and added a Kovac 78 LED light. These were ultra convenient and cheap priced on amazon.

With the Fiji Lemponpeel Angel out of the tank only a few hours and the Kenya Tree has 100% perked up and is no longer retracted constatly.

Oh and I popped a basic black tacky paper on the back, instead of sticking it giving a glossy look I just taped the corners with clear tape and you can't see the tape. Will probably replace with a large black posterboard cut to exact measurements at some point
OP

Fish and 2 corals are doing amazing. Snails are going nuts on the tank too.

The kenya tree is 4x its size a few days ago and the frogspawn is absolutely beautiful!

So far everyone is eating and doing well. Flame hawkfish is hilarious to watch!

Open to insight on what I should/should not do going forward on this tank build. Am I doing things well, or am I a train wreck ready to happen?

Well my dreams of going to a much larger fish tank have been put on hold since starting with the 30 gallon tank. Largely this is due to being safe with budget during the current economic climate. I am truly amazed however, in 90 days of having the tank I noticed coralline growing on the glass which kind of blew me away because other than starting the tank with live wet sand and live rock from LFS, and adding the fish and snails I have done no artificial introduction to increase odds of it growing. This morning (day 129 days) I also noticed tiny pods crawling on the glass which kind of blew me away too as I have done nothing to get these guys in either.
Some interesting events that I did/tested over the last few months:
- The Twin spot lived for about 2 weeks and I'm assuming now that I should never have purchased this guy as they are a bit more expert level than I am at currently. He stayed in his cave 99% of the day, and seemed to come out to eat but just didn't come out one day and I had to literally disassemble the whole scape to get him out.
- First 10 weeks I did water changes of 10-20% every few weeks
- Then went 30 days with no cleaning or water changes, just top offs
- White coralline spots appearing on the side and back glass
- 90% of my rock has a green coloration, but does not appear to be algae, thinking it may be corraline? It isn't "grassy" or flowing and just appears to be the rock color changing (see picture)
- My blenny tried to jump and banged his head on the glass while I was sitting at my desk, and later that evening was dead
- 3 days after the blenny died, my hawkfish had white cloudy underbelly and that evening was dead
- Water tests were fine up to these events, but then in the following days my Nitrate spiked to 15 and my PO4 to .20
- My Kenya tree retracted and the frogspawn retracted in size by 75%
- I did a 25% water change and sand bed cleaning
- 1 week later I have copepods or some form of pod running around on the glass
- Probably not adding any fish for a while due to feeling pretty bad about the blenny and hawkfish, even though LFS staff are saying it sounds like completely coincidental 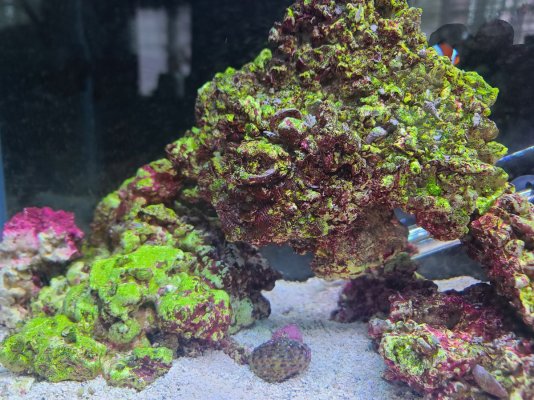 Sorry to hear about the misfortunes but stay positive, it will get better. Tank looks good.