Damsel took a ride through the plumbing

I was away for a few days and one of my overflow coverings came loose and one of my damsels took the long and bumpy ride to the sump. I have a remote sump in the basement so it's probably 25' of tubing ending in a ball valve that they must have barely squeezed through.

I put it in a hospital tank and have been running 1.018 salinity with a double dose of PraziPro since it initially had some wounds that looked very irritated or open. I'm at the end of my 3 day treatment on the Prazi and its body has healed really well so far but the one visual thing left that hasn't made much progress is what I can only describe as a prolapsed anus. It initially was very red but over the 3 days has normalized in color but hasn't really receded. I'm worried there is still internal trauma/swelling thats causing it some issues.

The problem is I cannot get it to eat anything, even with garlic/selcon and ever type of food I've tried. Its definitely freaked out in the tank and won't stop hiding, I'm wondering if I should keep it on hold or if returning it to the DT would be better since I have a school of damsels and maybe it would eat back with them. 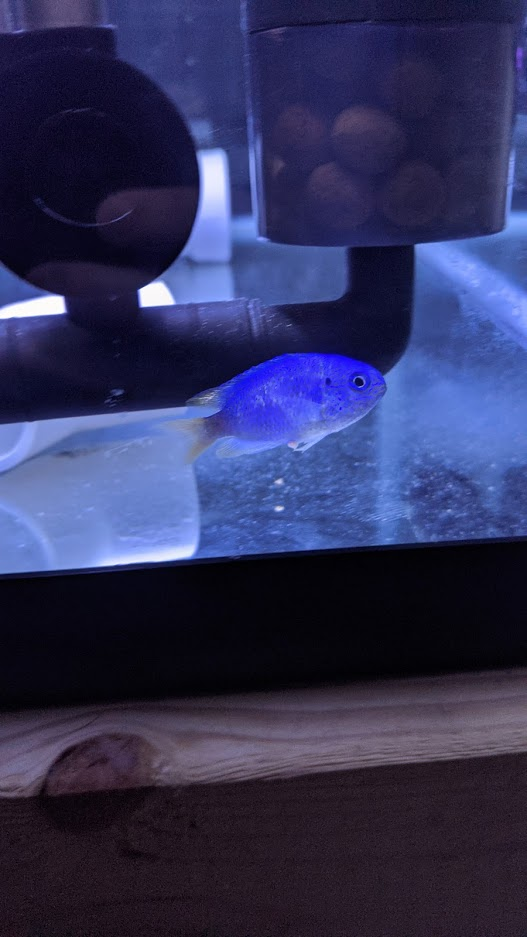 Prazipro treats metazoan parasites, so it wouldn’t have any benefit in this case. I agree that it is likely the fish has internal damage from trauma. I would not put it back with the others, as they might turn on it as it is in a weakened state. If it is stable where it’s at, I would leave it and see if time helps.
Jay
OP

Thanks Jay. I had thought Prazi helped with bacterial things so I was hoping to use it in preventive capacity but I goofed on that.

I'll leave him down there for awhile. Is there anything else you can think of that I could do to help him out?

Jimbo7 said:
Thanks Jay. I had thought Prazi helped with bacterial things so I was hoping to use it in preventive capacity but I goofed on that.

I'll leave him down there for awhile. Is there anything else you can think of that I could do to help him out?
Click to expand...

If you can, lowering the specific gravity to 1.020 can help the fish with osmotic balancing. The breaks in the skin make it harder for it to maintain that balance against full strength seawater. Keeping the lights a bit dim also helps reduce stress.