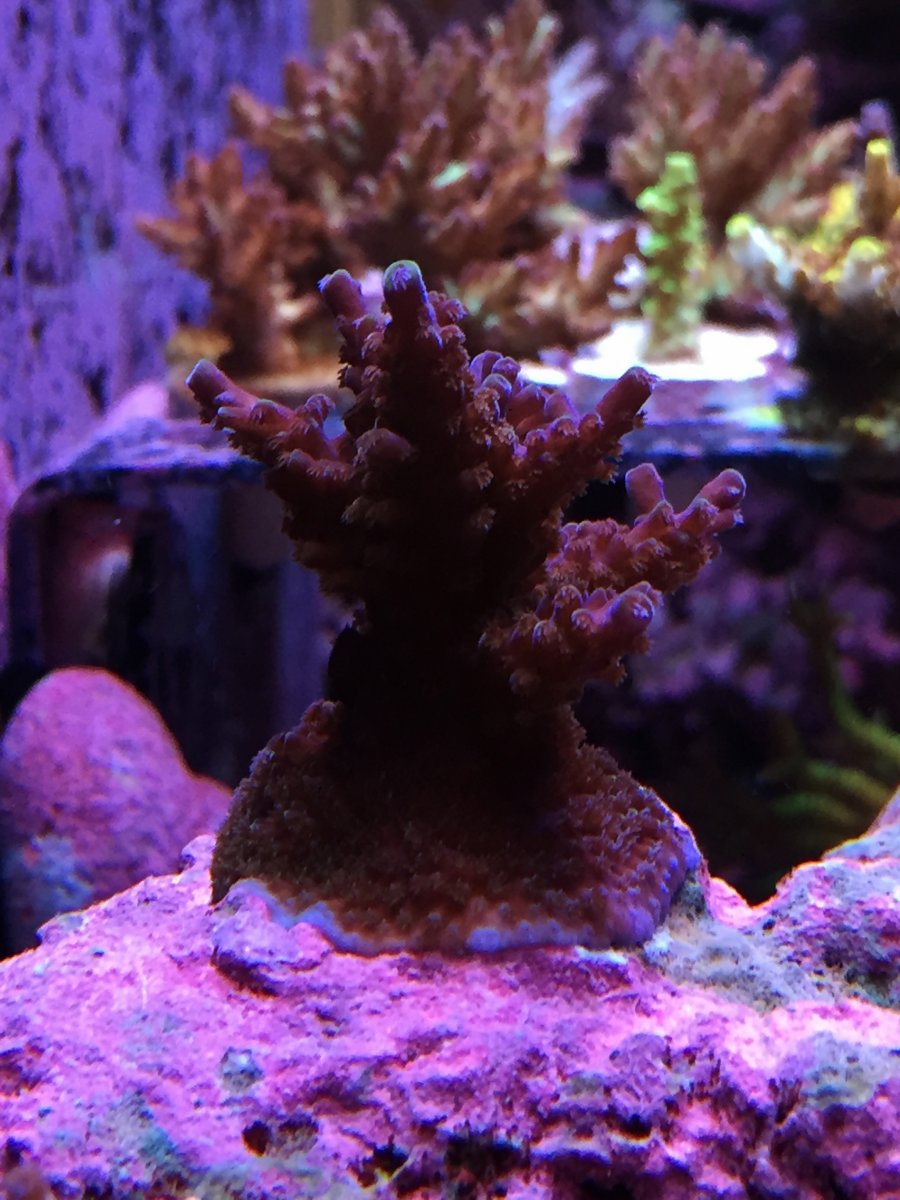 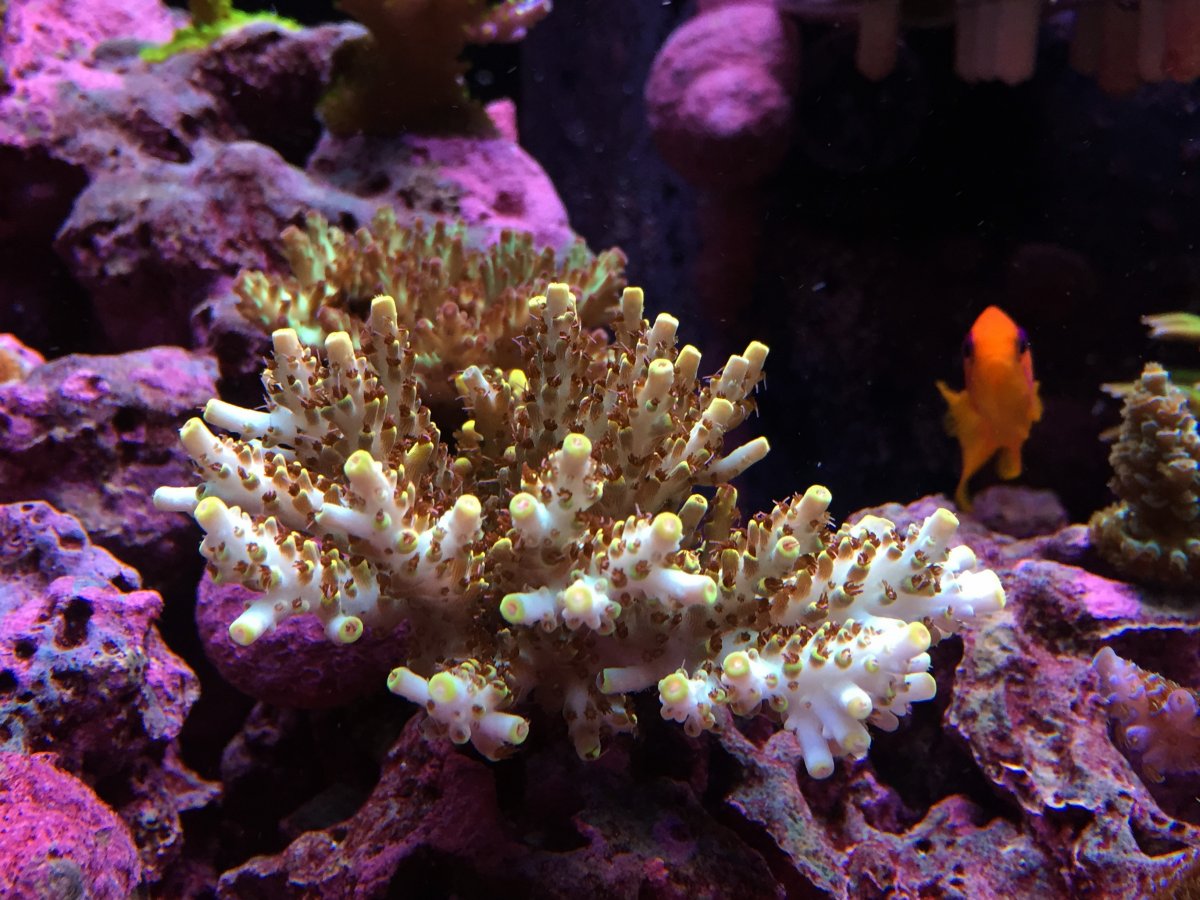 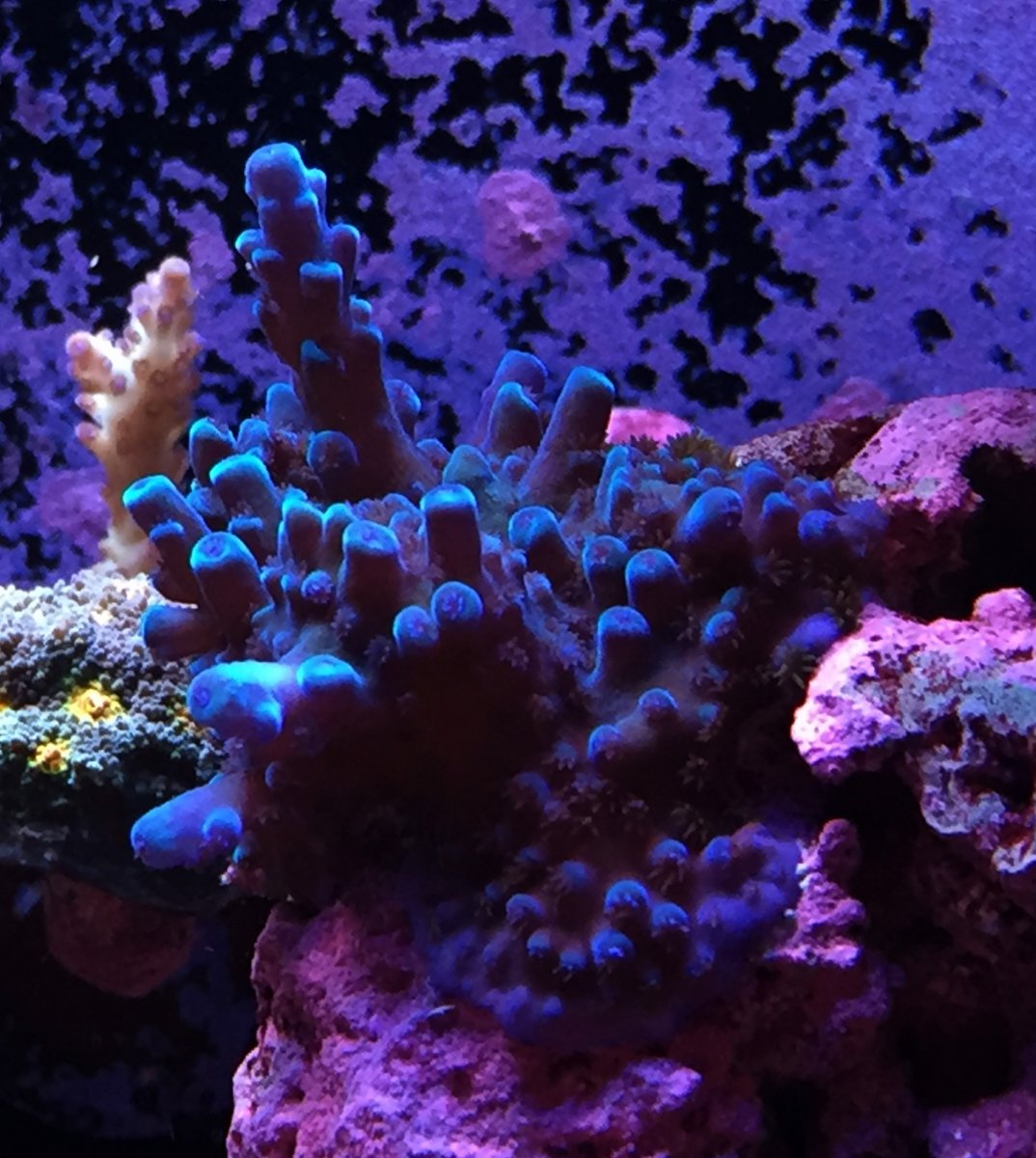 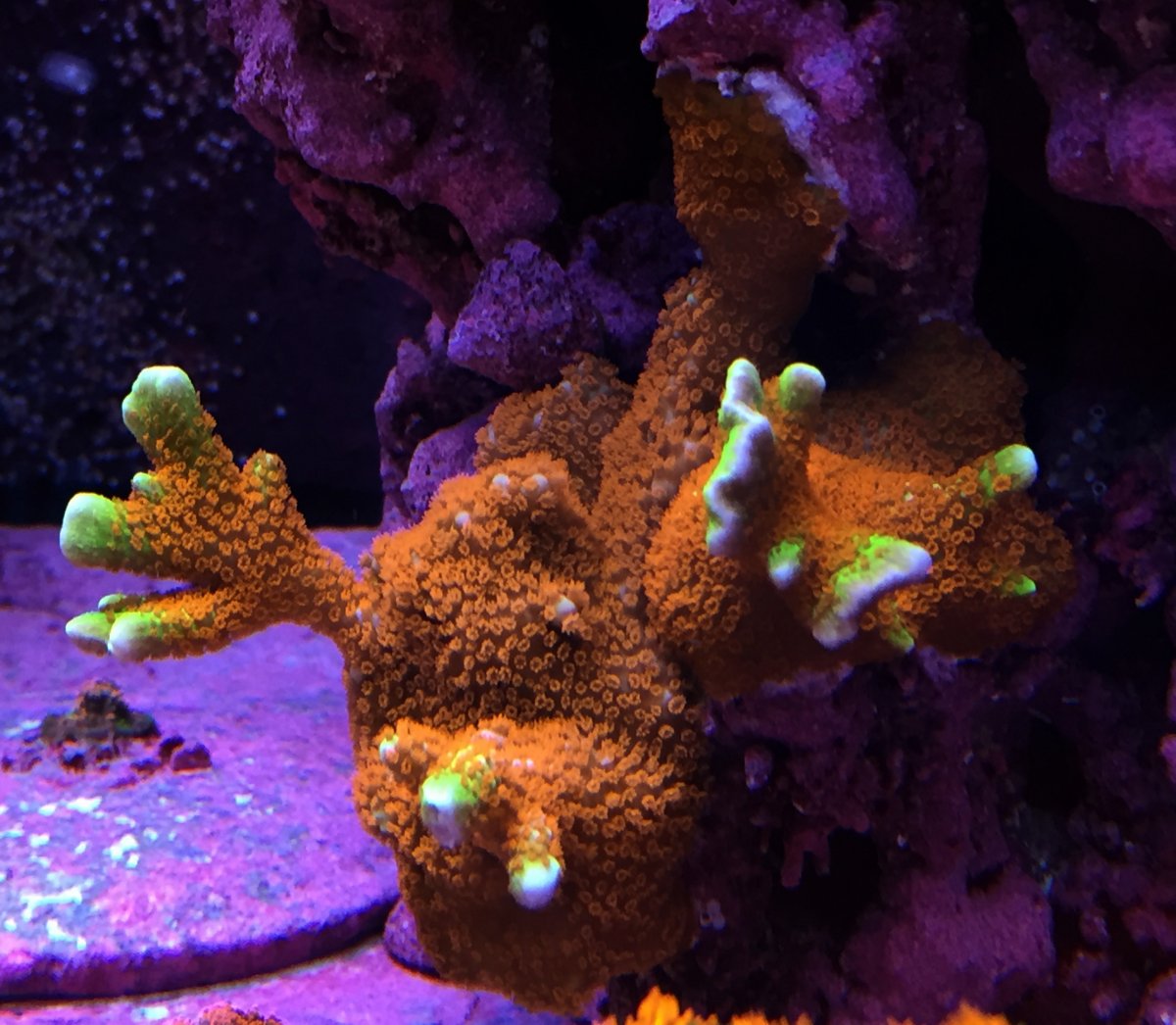 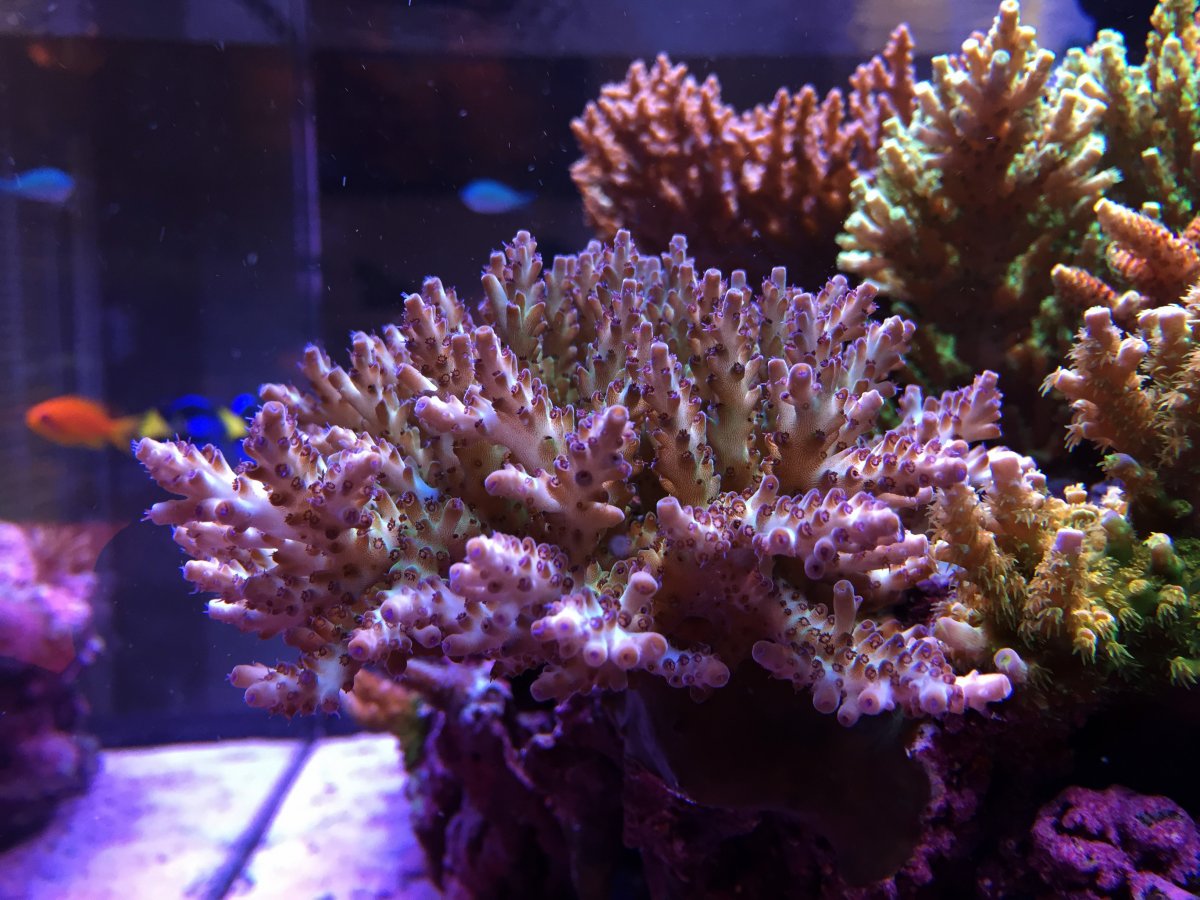 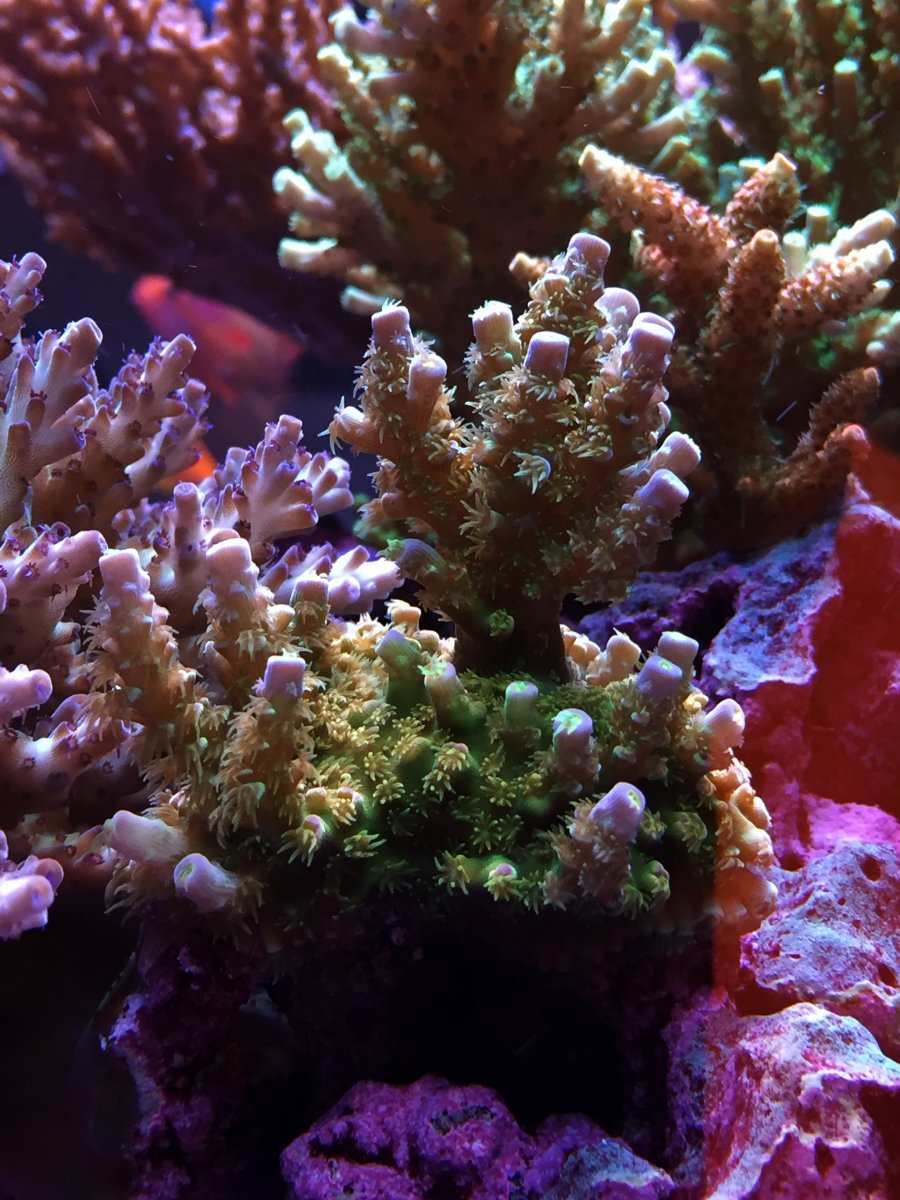 Thank you for sharing lots of good info. Very nice grows of your corals.
May I ask why you decided to switch from Led straight to T5 without considering hybrid Led-T5?
OP

coral408 said:
Thank you for sharing lots of good info. Very nice grows of your corals.
May I ask why you decided to switch from Led straight to T5 without considering hybrid Led-T5?
Click to expand...

Out of the box hybrid fixtures didn’t exist when I switched to T5 and now that I already have it set up, it wouldn’t be worth the money to switch. Plus my corals are doing great without LED. I do have a Reef Bright led attached to my fixture, but that’s more for my own viewing than helping the corals. 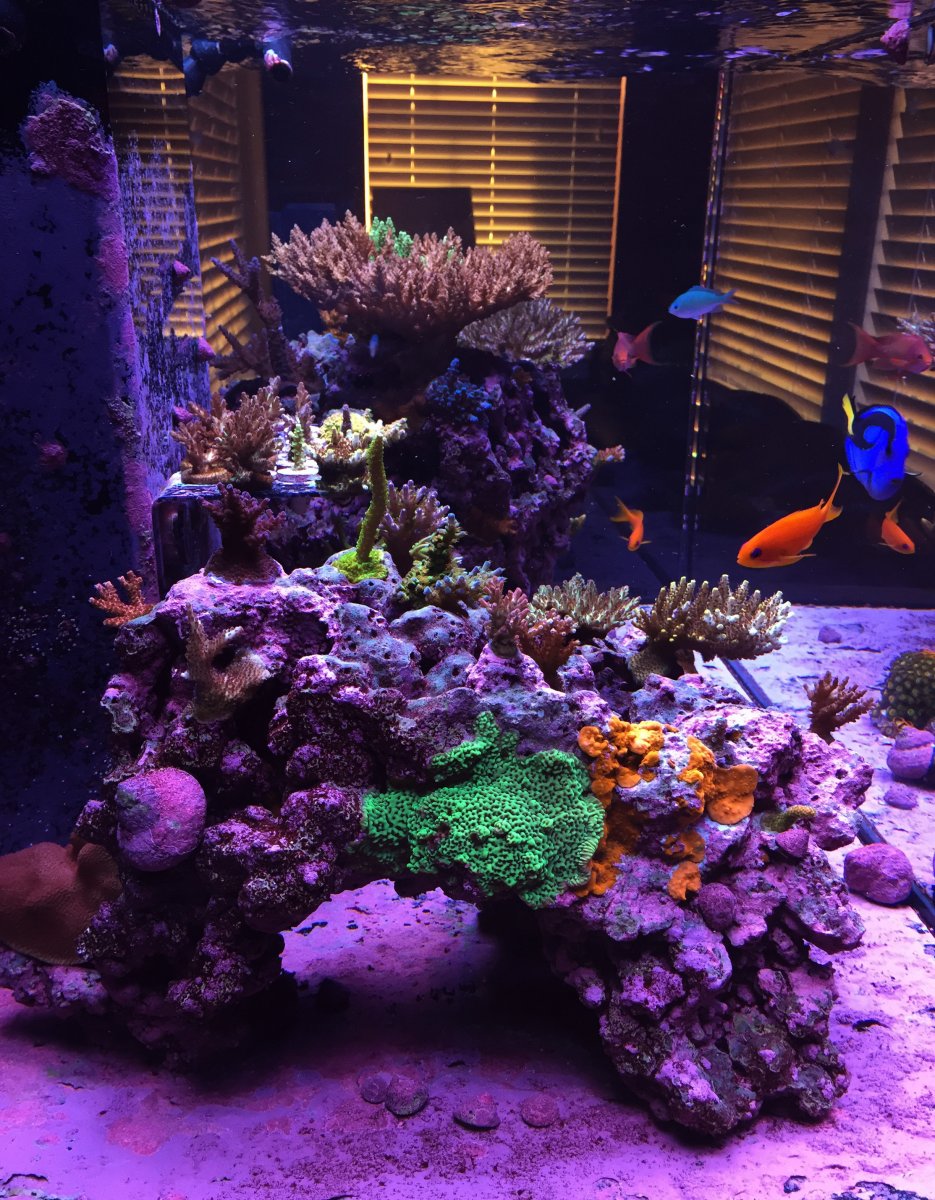 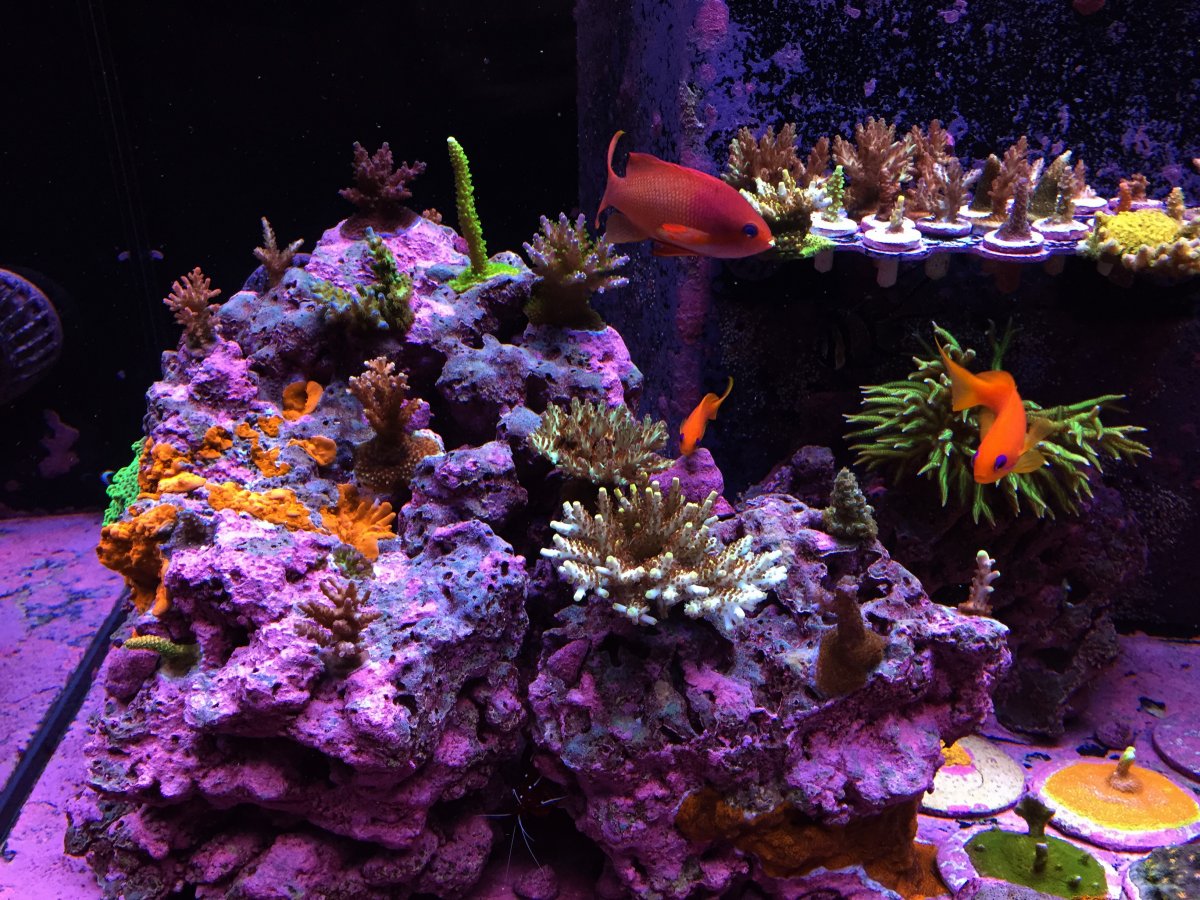 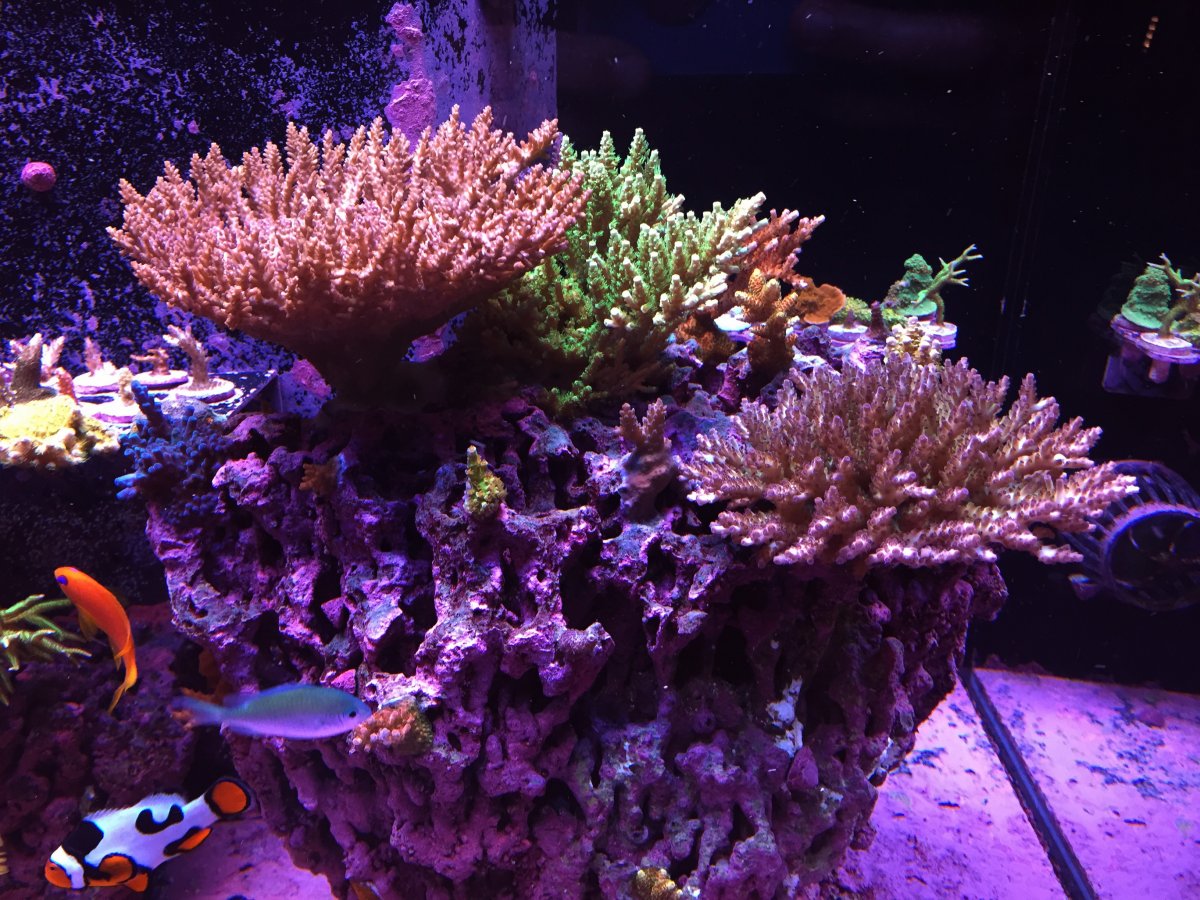 Your tank is bare bottom? I’m gonna go bare bottom on my new tank. Did you have yours with a bottom color or just glass?
OP

bubbaque said:
Your tank is bare bottom? I’m gonna go bare bottom on my new tank. Did you have yours with a bottom color or just glass?
Click to expand...

Yeah, I have a 1/4" custom cut piece of black Starboard on the bottom to protect the glass (not sure how necessary it is). My original plan was a very thin layer of sand on top of the Starboard because I think sand looks great. But with acros I needed so much flow that the sand was blowing all over the place. So less than a year in, I sucked it all out in a couple water changes and never looked back. My parameters are much more stable without sand and I'm able to run my MP40's much lower in the tank and much more powerful. I run them at 90% Reefcrest, Anti-Synch which provides huge random flow throughout the tank. Plus it allows me to keep them out of the way on the back glass.

Does the whole bottom being pink bother you? That’s what I’m worried about as my sand is all pink and I hate it.
OP

bubbaque said:
Does the whole bottom being pink bother you? That’s what I’m worried about as my sand is all pink and I hate it.
Click to expand...

No, I like the look of the coraline algae. You could always get a couple urchins to keep the coraline at bay. One of the nice features of BB is that debris collects in just a couple spots, so when I do water changes, I can quickly suck it all up.

The red filter I use on my phone also makes it look much more red than it really is. I lack your photo skills! In reality, it’s a much more pleasing light pink color.
OP

Got a nice new frag pack in the mail today from @bubbaque ! 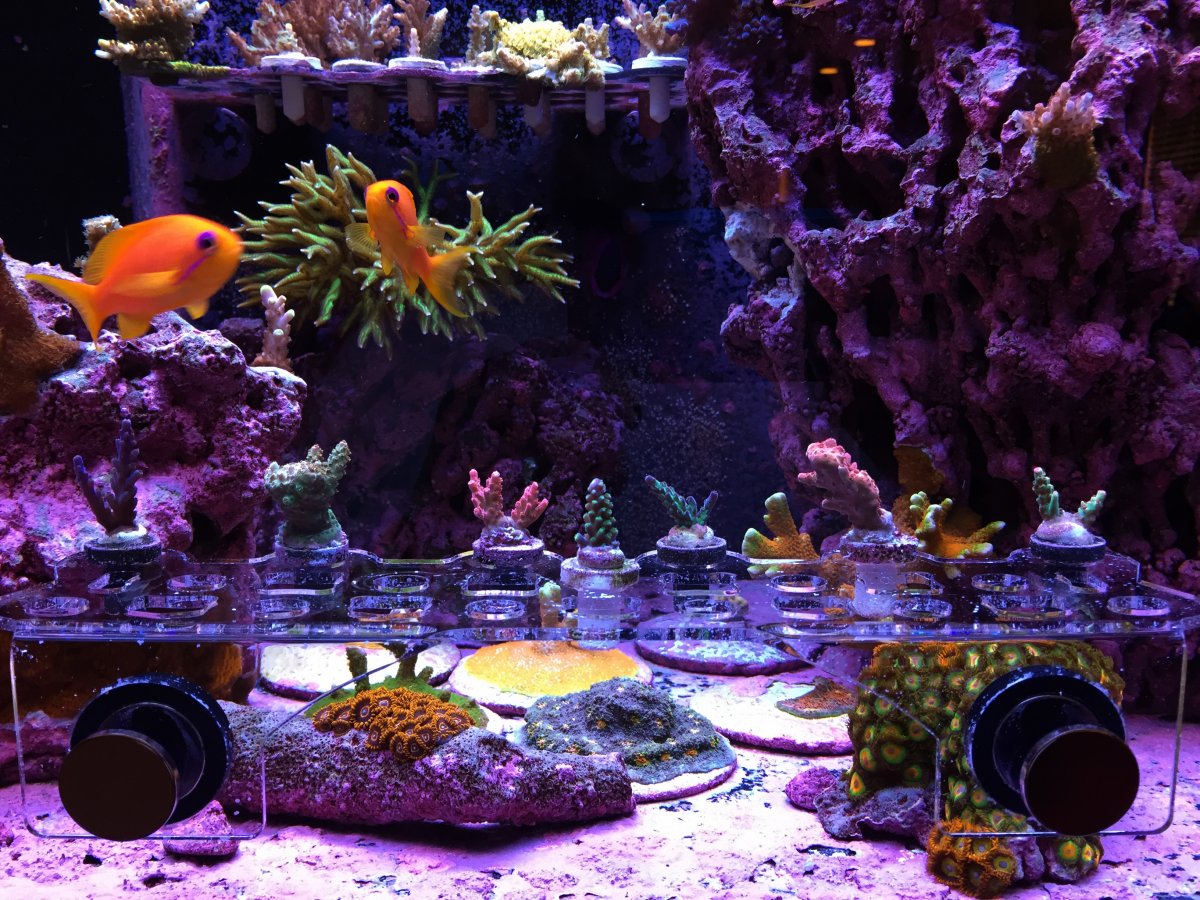 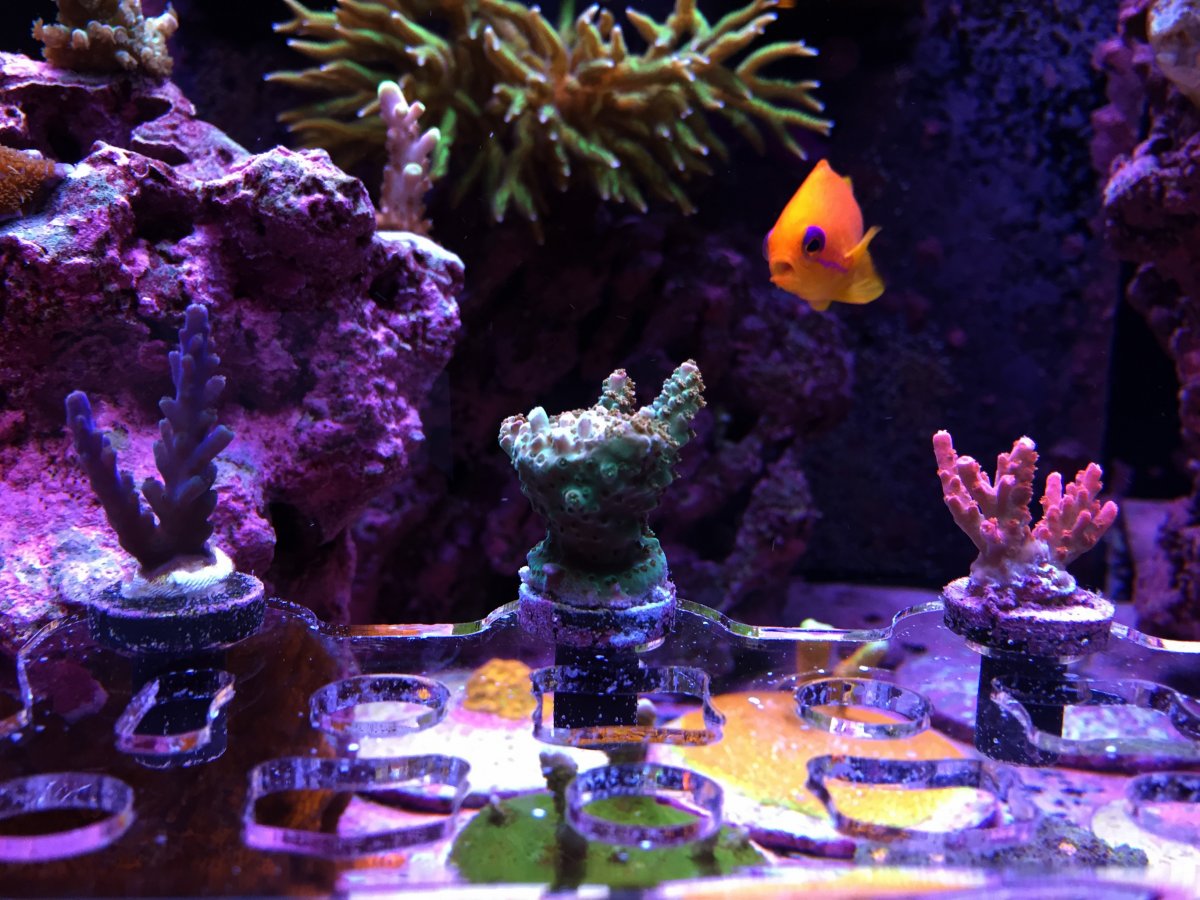 PC Superman is starting to spread it's wings. 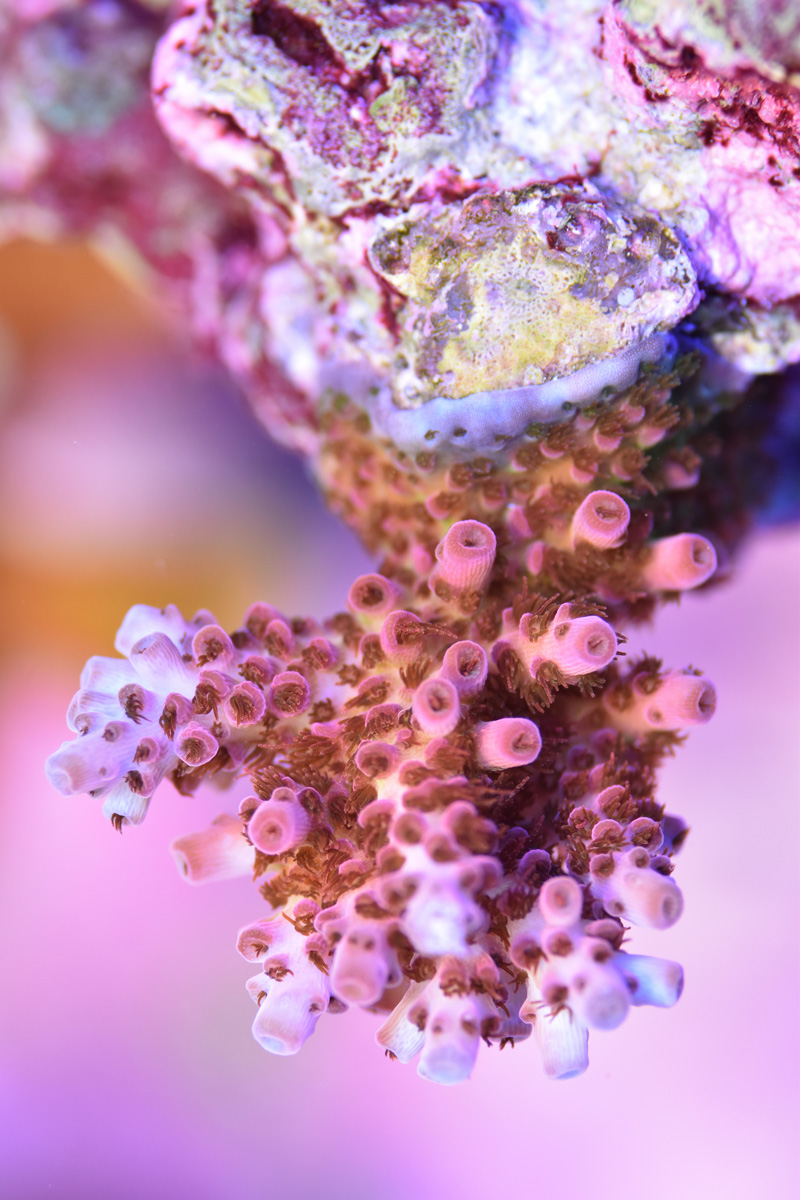 One of my favorites which is really hard (for me!) to photograph. It's a much more vibrant lime green in person. OG Atlantis Raspberry Limeade. 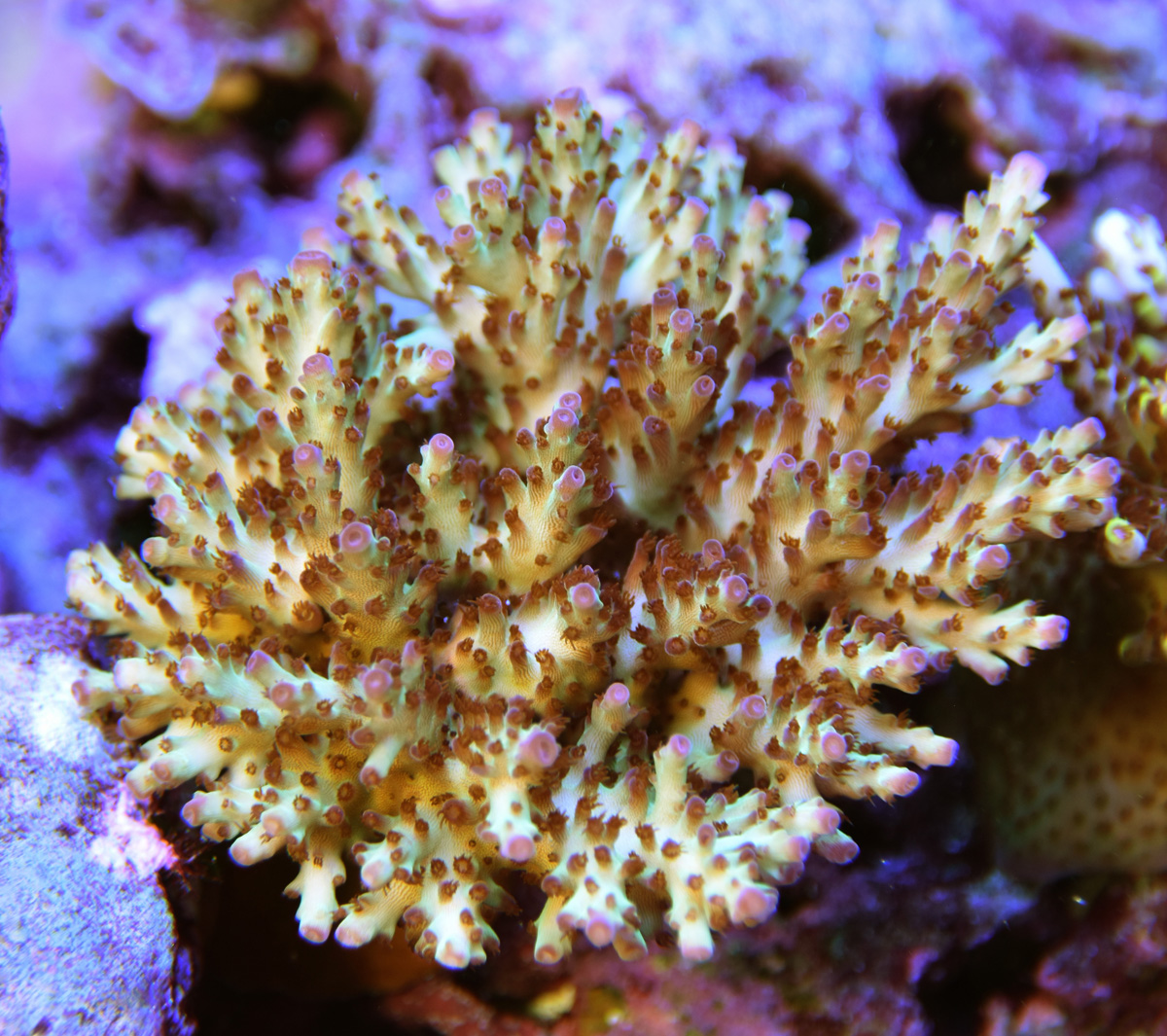 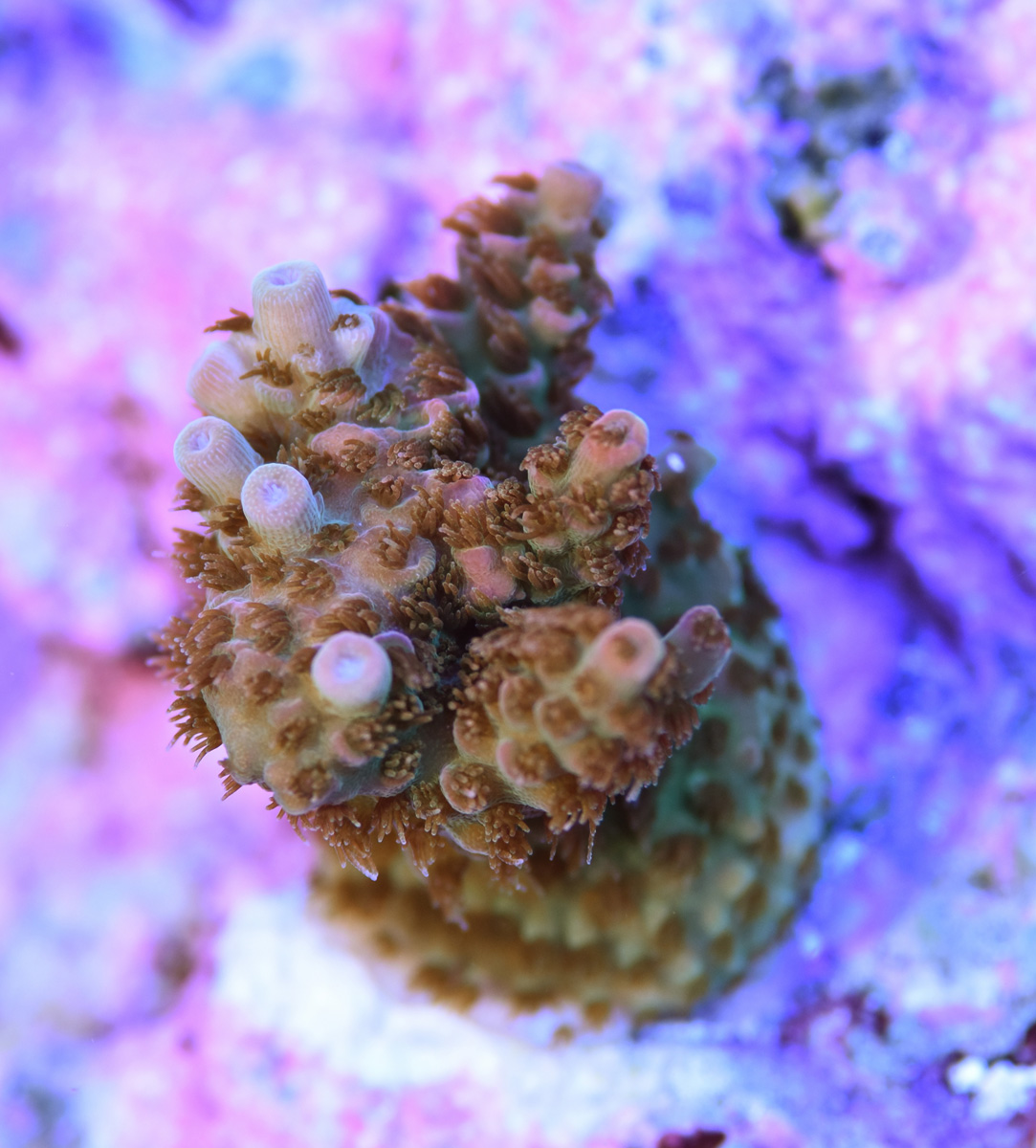 So as followers of my build thread, you know that I like to share my mistakes so as to help others to not make the same. This is one such case.

About 5 months ago I added a CO2 scrubber to my tank to help with the winter pH drop. My pH was averaging 7.6-7.8 throughout the day due to the house being closed up. The CO2 scrubber worked great and once it settled down I was averaging 8.15-8.4. The corals and tank responded wonderfully and all news was good.

Fast forward to this spring and the pH rose a bit, now averaging 8.2-8.5. I noticed that my Cal/Alk was getting a little wacky. I couldn't get Alk to go above around 6.8 and both Cal and Alk were requiring daily manual dosing to maintain levels in addition to my auto dosing. I also noticed what appeared to be precipitate collecting in my GFO reactor. My Cal/Alk daily auto dosing had risen to 275ml/375ml which was off the charts. Something was wrong...

Since I first started my tank 4+ years ago, I've always set my dosers to be over a 24 hour period. I dose every 30 minutes, 24/7 with Calcium offset by 10 minutes. I've been reading a lot of threads on Trident and other auto testing devices lately and how people were noticing much less consumption when lights were out vs when lights are on. I had always assumed this, but never bothered to specifically change my dosing, assuming it would balance out over a 24 hour period. My theory is that with the high pH and my Alk/Cal fluctuating so much throughout the day, I was hitting periods where it was precipitating. This was further exasperated by my manually dosing considerable amounts to bring levels up to where I wanted. My GFO/Carbon reactors are in a manifold off my return line. So when I manually dose, it goes through them before re-entering the tank. This high pH, high Alk, high Cal all at the same time was collecting in the reactors (actually just GFO for some reason...) and precipitating.

So how did I fix it without killing my tank? A several step process:

1. I broke the dosing into two periods, Day & Night with different dosing for each.
2. I cut my dosing in half with the expectation I would need to gradually raise it to the correct amount.
3. I cut off all dosing at night, with the assumption that (based on other threads I read) the corals would not consume either at night.
4. I shut down the gate valve to my GFO reactor prior to manual dosing.

Scheduling my two different dosing periods/amounts turned out to be easier than I thought using my Apex. My lighting period is 12 hours, starting at 10:00am and concluding at 10:00pm. So I set my dosing periods to be 10:00-22:00 and 22:00-10:00. I use BRS 1.1 dosers. It's likely even easier with the Apex DOS, but I've read numerous reviews about it being loud and our tank is in our family room and I need it silent. Cutting dosing in half proved to help as well. My third step was a bit frightening! I shut off both overnight and re-measured in the morning. Needless to say I didn't get much sleep that night. It turns out the other threads were wrong and acros do actually consume Cal/Alk while the lights are out, albeit in different amounts. But this allowed me in one night to calculate what the overnight drop was. And last, as I was manually dosing up levels I first shut off my GFO reactor which has since kept any precipitate from forming.

So the good news is my tank dosing is balanced out again and my acros never skipped a beat. In fact, they seem to be showing slightly more PE since getting the levels balanced out again, although my tank was getting good PE already. Another interesting thing I noticed is that my Tyree Pink Lemonade colony which browned out a few months back (I think do to a Fluconazole dosing I did), started coloring back up. This may be purely a coincidence, but I'll take it as a sign things are back on track!
Last edited: Jun 5, 2019

That’s a lot of good info!