I got a female Pom Pom Crab a few months ago, and recently decided I would attempt to get her a mate. I know her to be a female because she laid eggs last week (and has since released them).
I ordered two more Pom Pom Crabs hoping to get at least one male, and received them yesterday. I thought them both to be more females, according to this article: 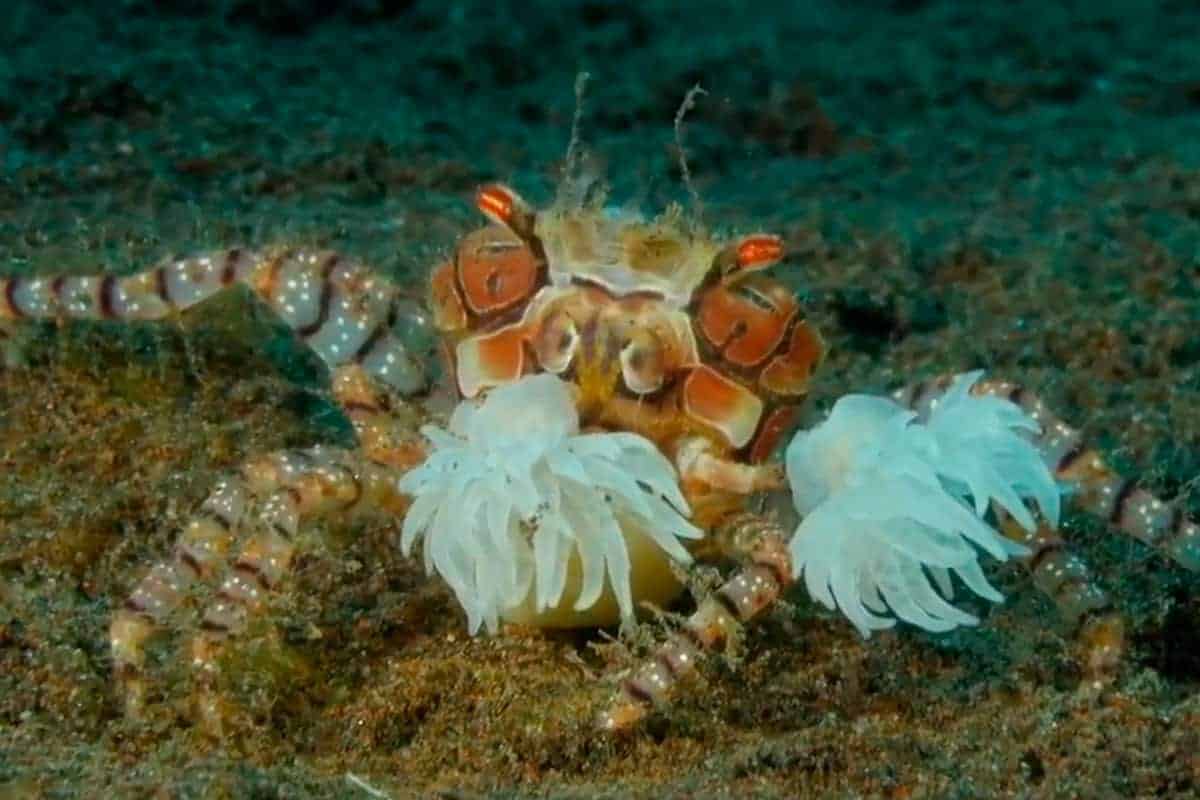 Suitable for both beginners and experienced aquarists, it is one of the most peaceful saltwater crabs, therefore, it can be a perfect addition to small or nano tanks. They are safe to have around your coral reefs as well, so these are a species you don’t have to worry about.

I’m not sure what’s going on with two of them, see pics... is this aggressive behavior? The two in the pics are about the same size, and one of them is my original girl. The third one has taken up residence on the opposite side of the tank and is significantly smaller.

Everyone has two pom poms, so that shouldn’t be a reason for aggression. Original girl is well fed (she comes out for sinking pellets daily). 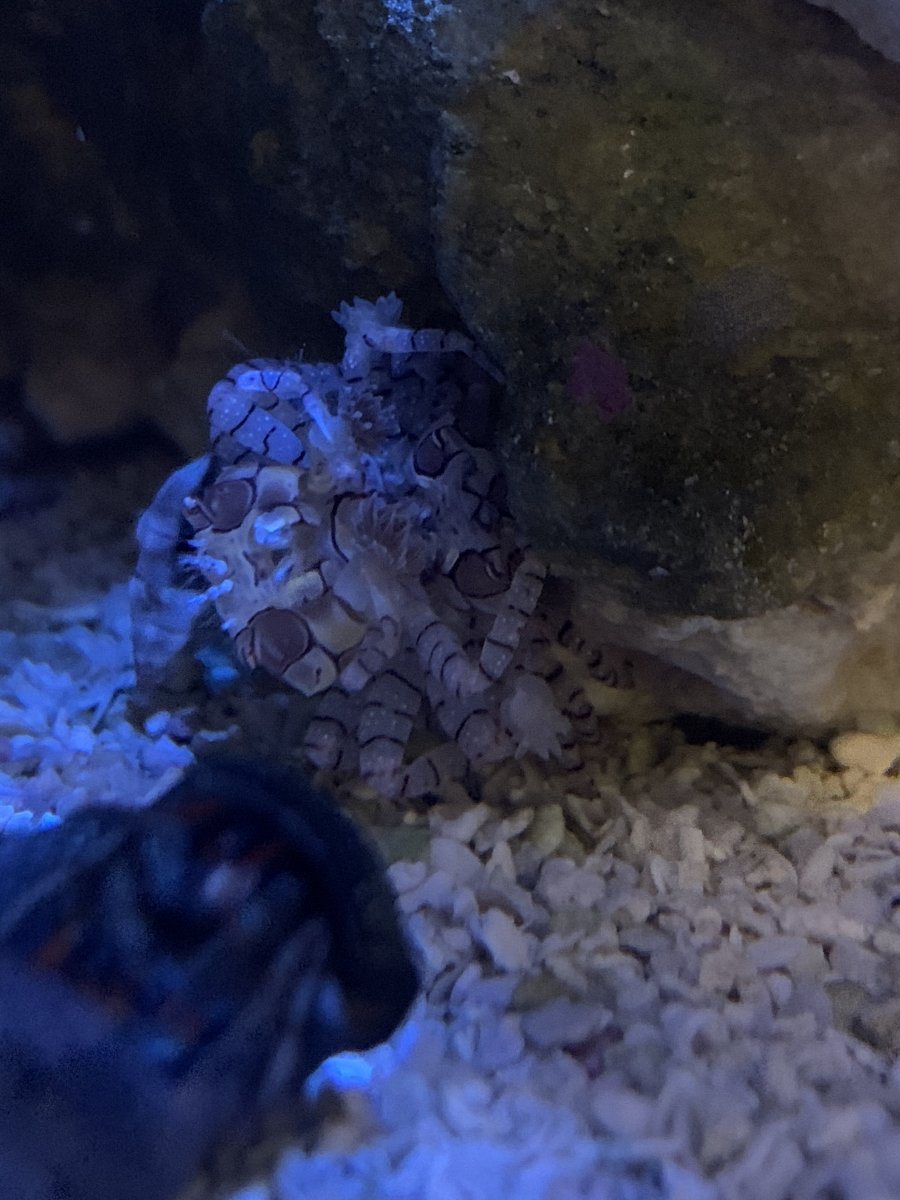 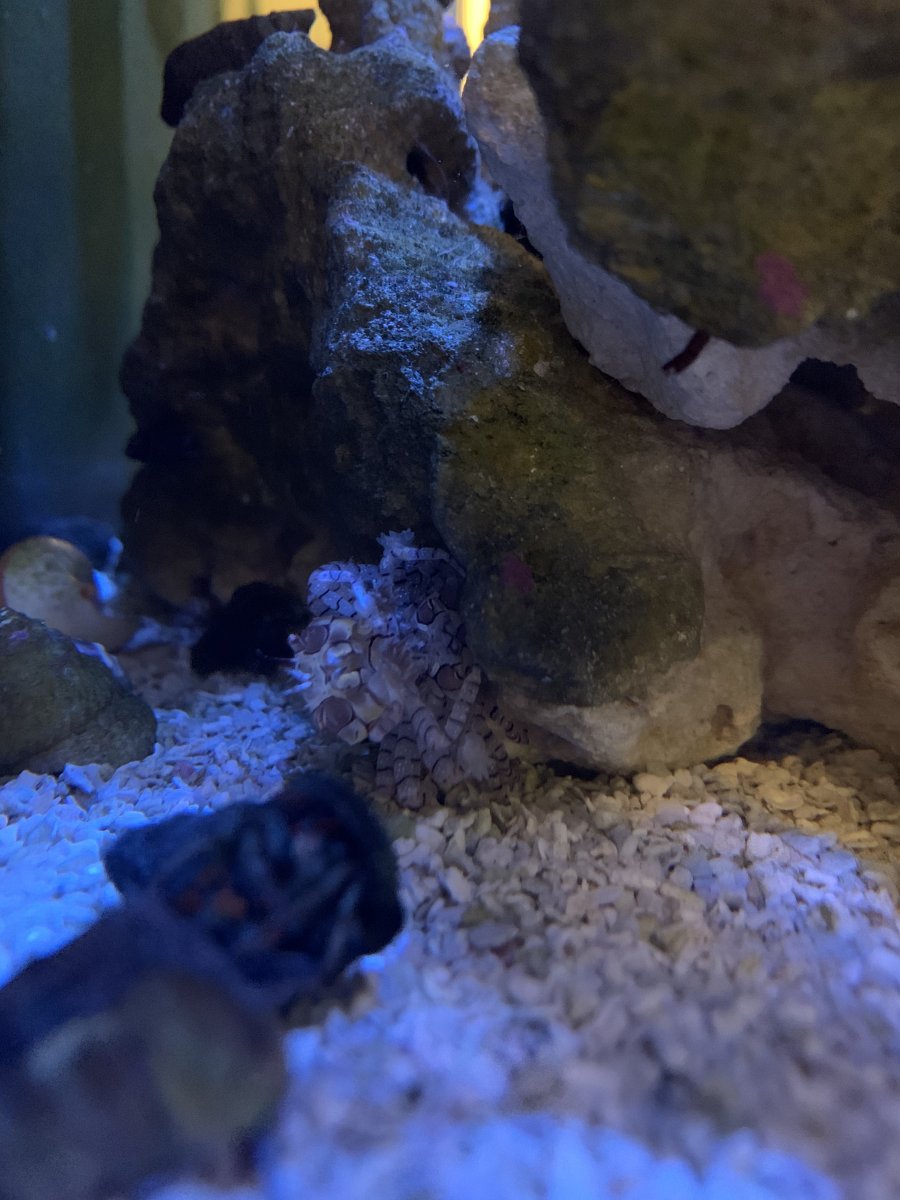 How are they doing? I don't have an insight to give, I just have one.

Following, I plan on getting a few before long.

What sinking pellets do you feed them?

Unfortunately, they were definitely fighting the other night. I observed them for a while and they ended up bouncing around punching each other. I used a target feeder to break them up. Since then, they’ve been okay (while I’ve observed the tank anyways), still hanging out on the underside of the same rock though.
One of them lost a pom pom anemone, which is now crawling around the rock alive and well.. hoping the crab decides to take it back.

The third Pom Pom Crab (which is a tiny baby) has made her happy home on the complete opposite side of the tank from the fighting two. She seems to be less shy than the adults. She’s out all day waiving her pom poms.

I found some very old posts on another forum stating that others have had issues with aggression with these crabs when introducing them at different times (like a I did, ooops). Apparently, they can get territorial with their own kind and establish territory, usually not straying from their preferred rock. So far, that seems to be the case - my original girl has hardly ever left “her rock” in the four months I’ve had her. I also read that people have had success keeping more than one, but in those posts no info on gender, how many, or if introduced at the same time..

Mine are in a dedicated crab tank that doubles as an IQT. I have an emerald and many hermits in the same tank and the Pom Pom Crabs pay no attention to these other crabs. I might move one of the adult Pom Pom Crabs to my DT if aggression continues. But hopefully they’ve sorted out the alpha now and will be fine.

Post an update here if you get multiple Pom Pom Crabs. I’d love to hear your experience. They are such cute little crabs and so unique with their coloration and pom poms.
OP

Here are the sinking pellets I feed. I use a target feeder to drop them right outside the “Pom Pom cave” and my original girl crawls for them.

Also, here’s the lost anemone, which is currently at the opening to their cave, so hopefully the crab finds it again.

And finally, here’s the baby one hanging out

ariellemermaid said:
Here are the sinking pellets I feed. I use a target feeder to drop them right outside the “Pom Pom cave” and my original girl crawls for them.

Also, here’s the lost anemone, which is currently at the opening to their cave, so hopefully the crab finds it again.

And finally, here’s the baby one hanging out
Click to expand...

Cool, thanks! I'm excited to get some for my tank, it's so empty right now.

A
Cast of Pom Pom Crabs